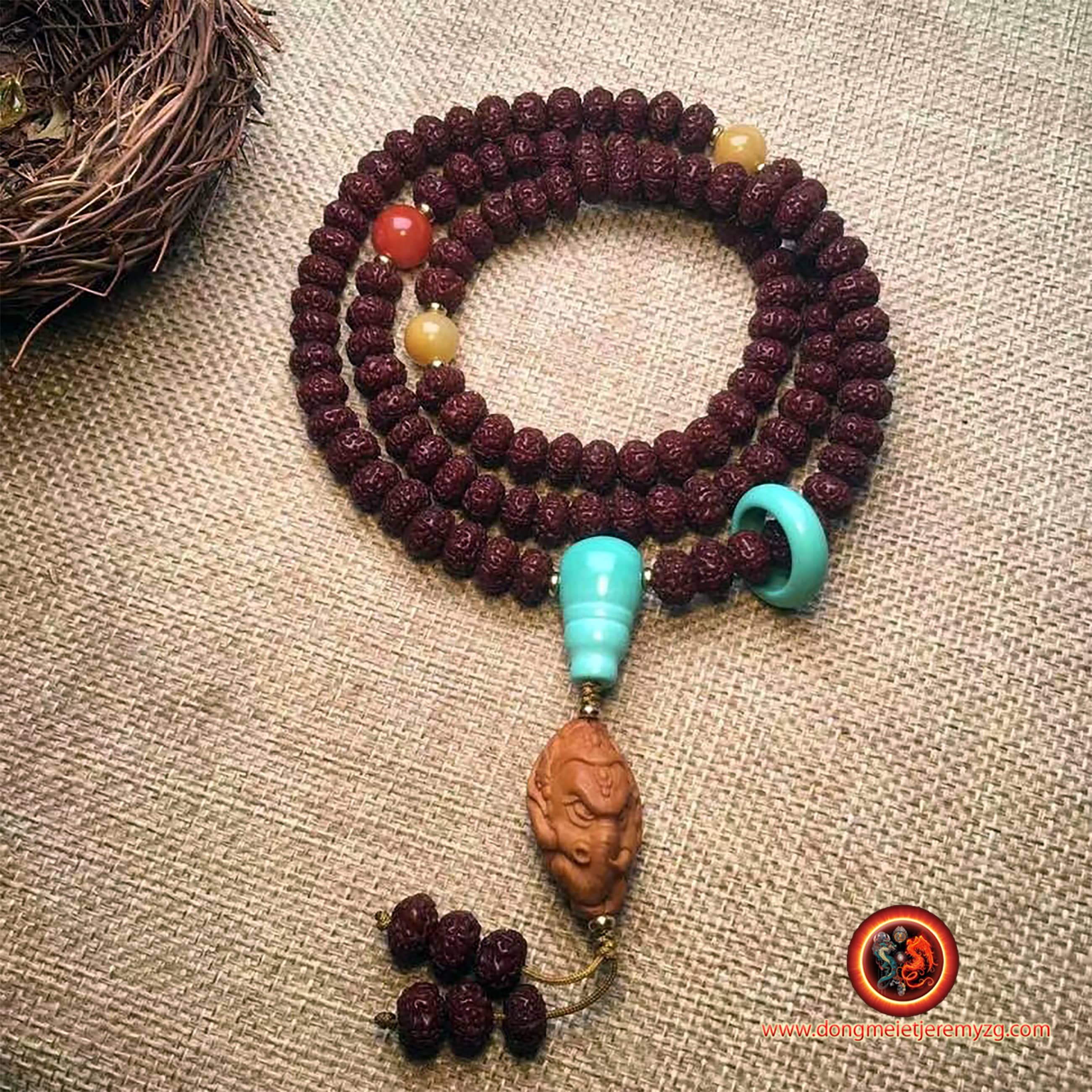 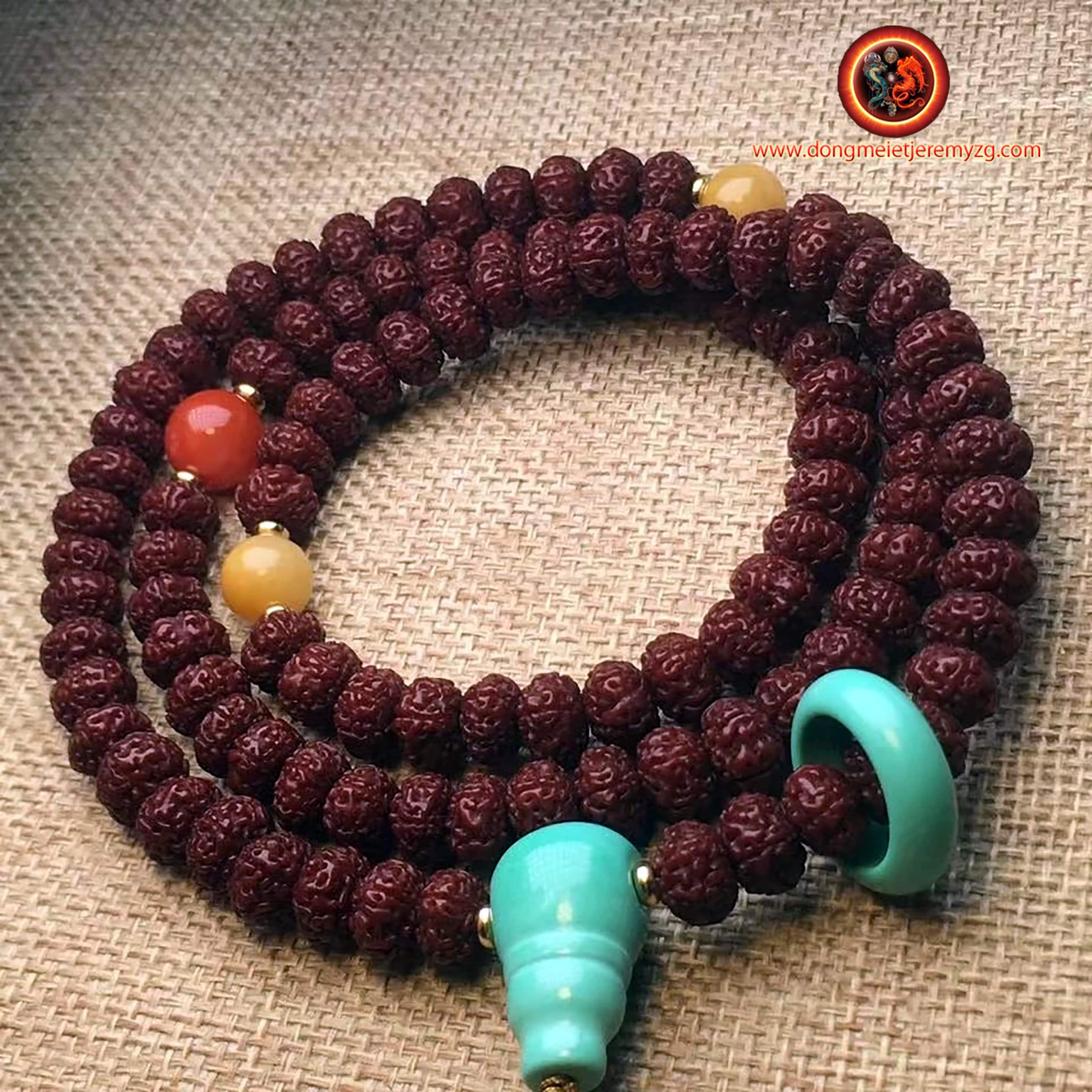 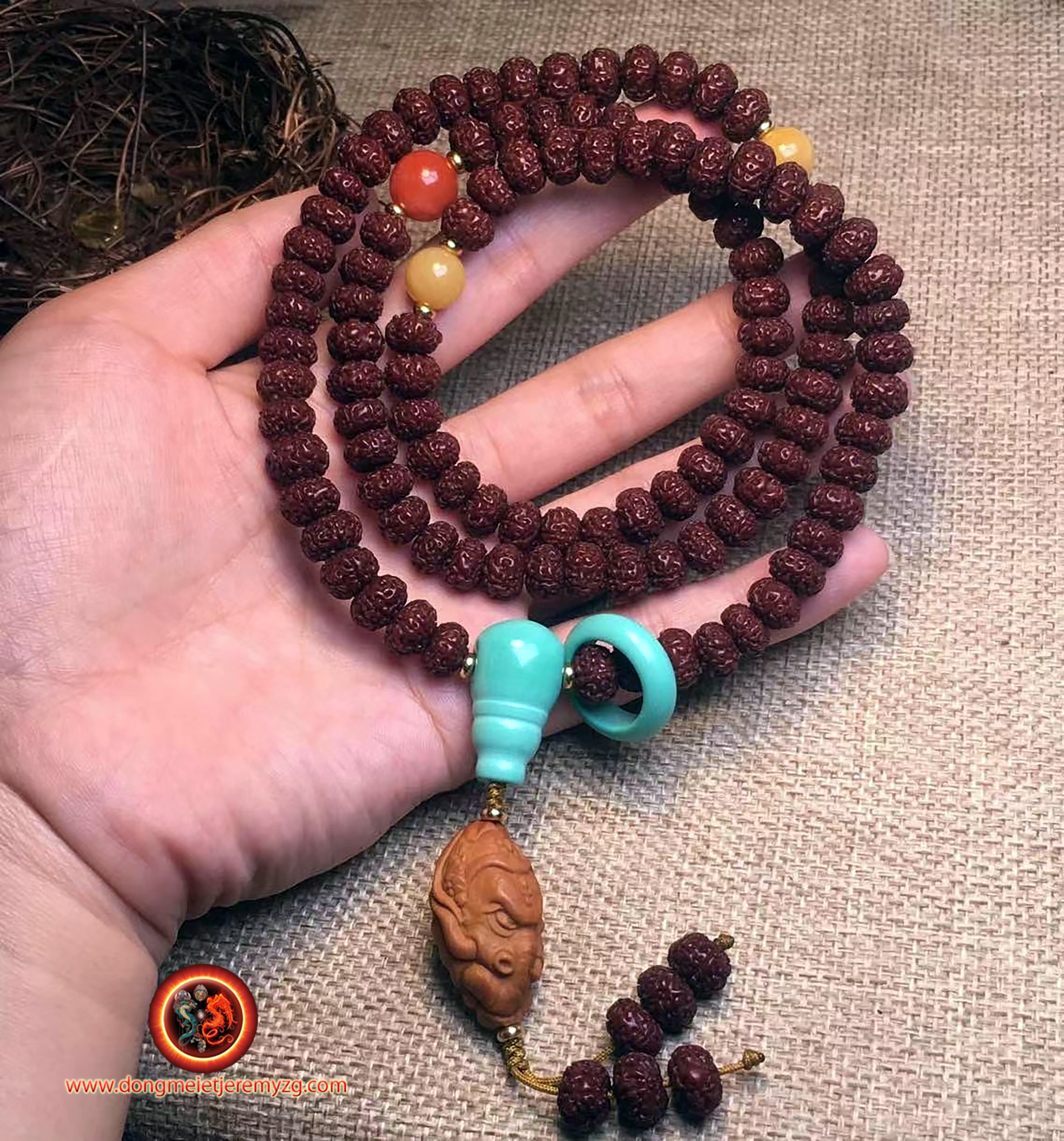 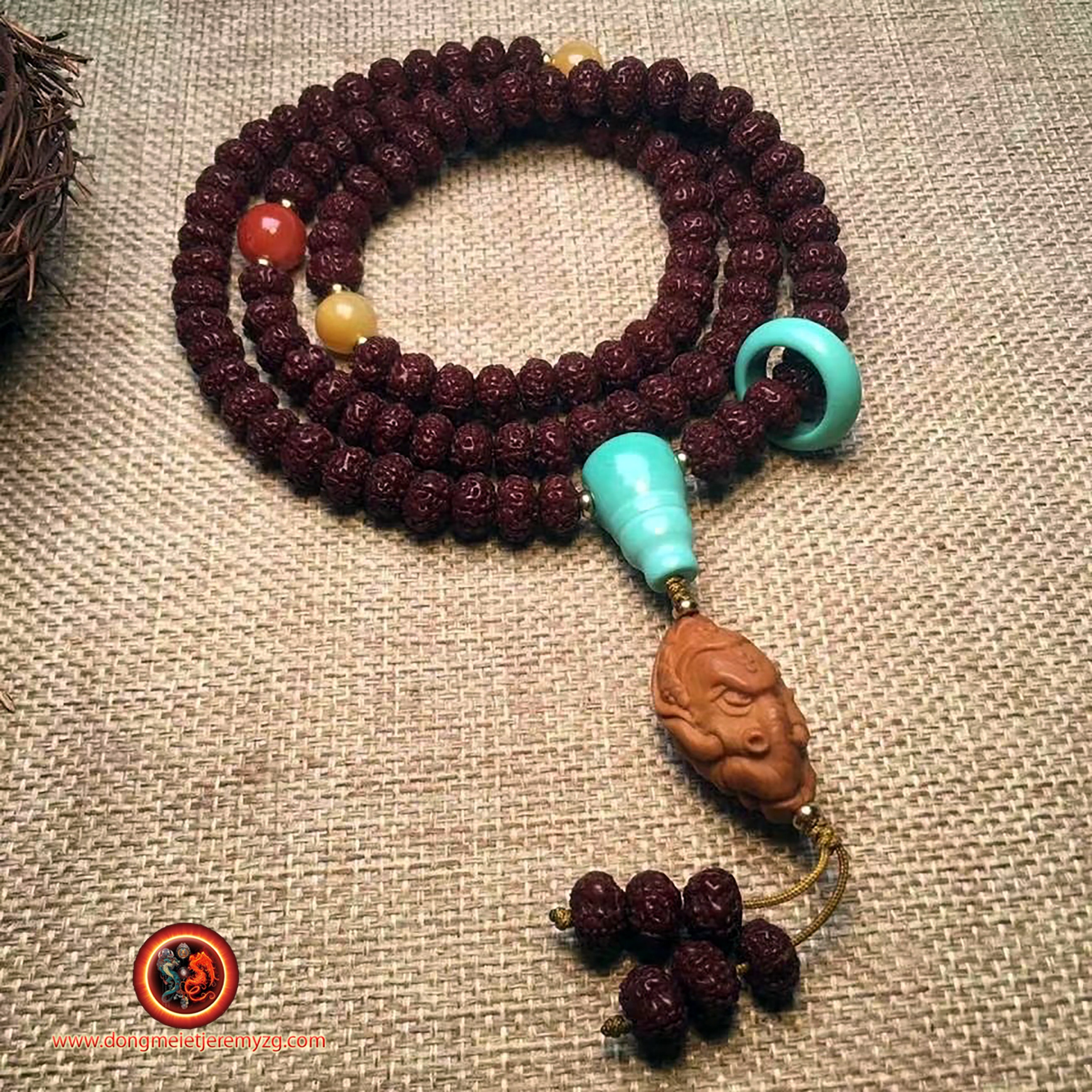 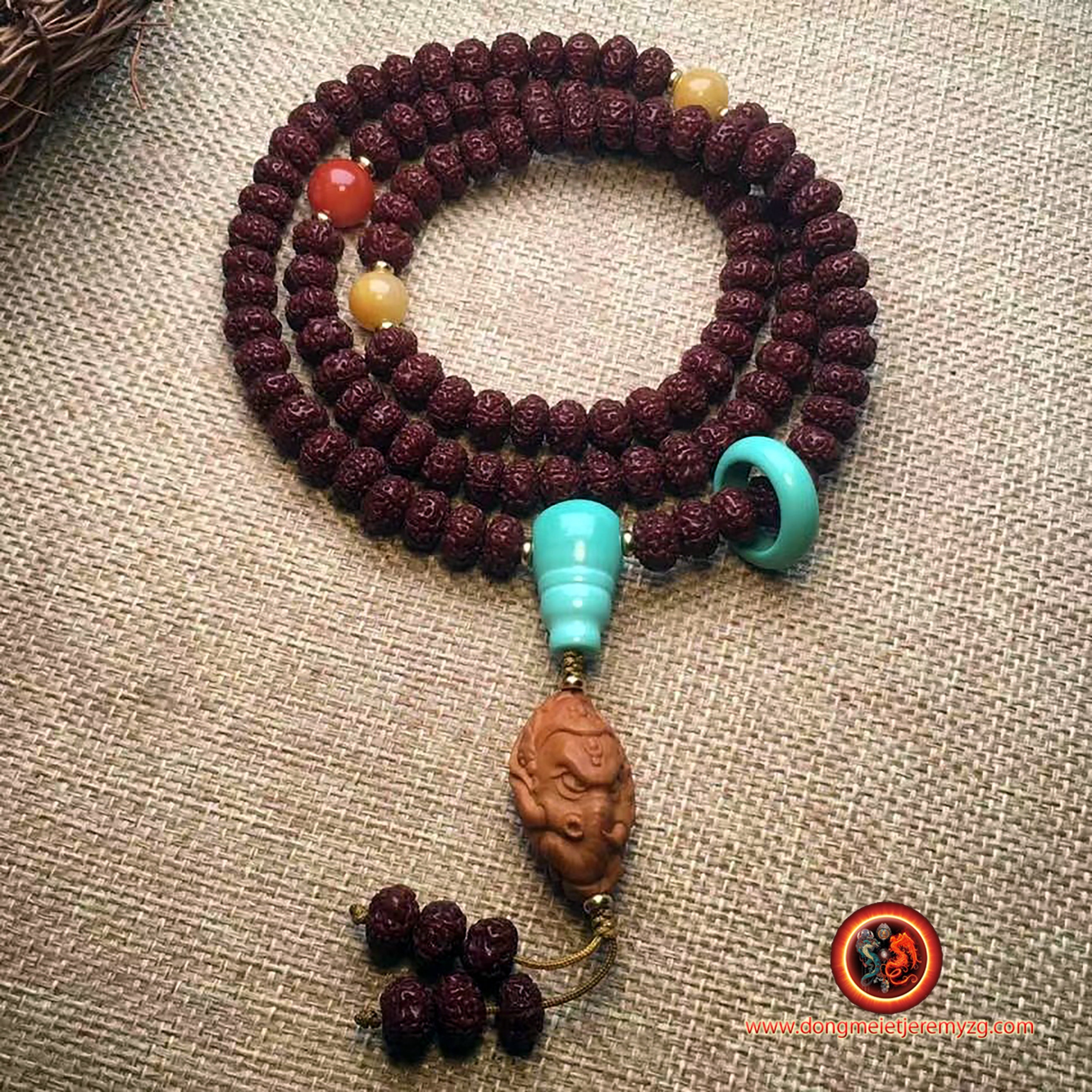 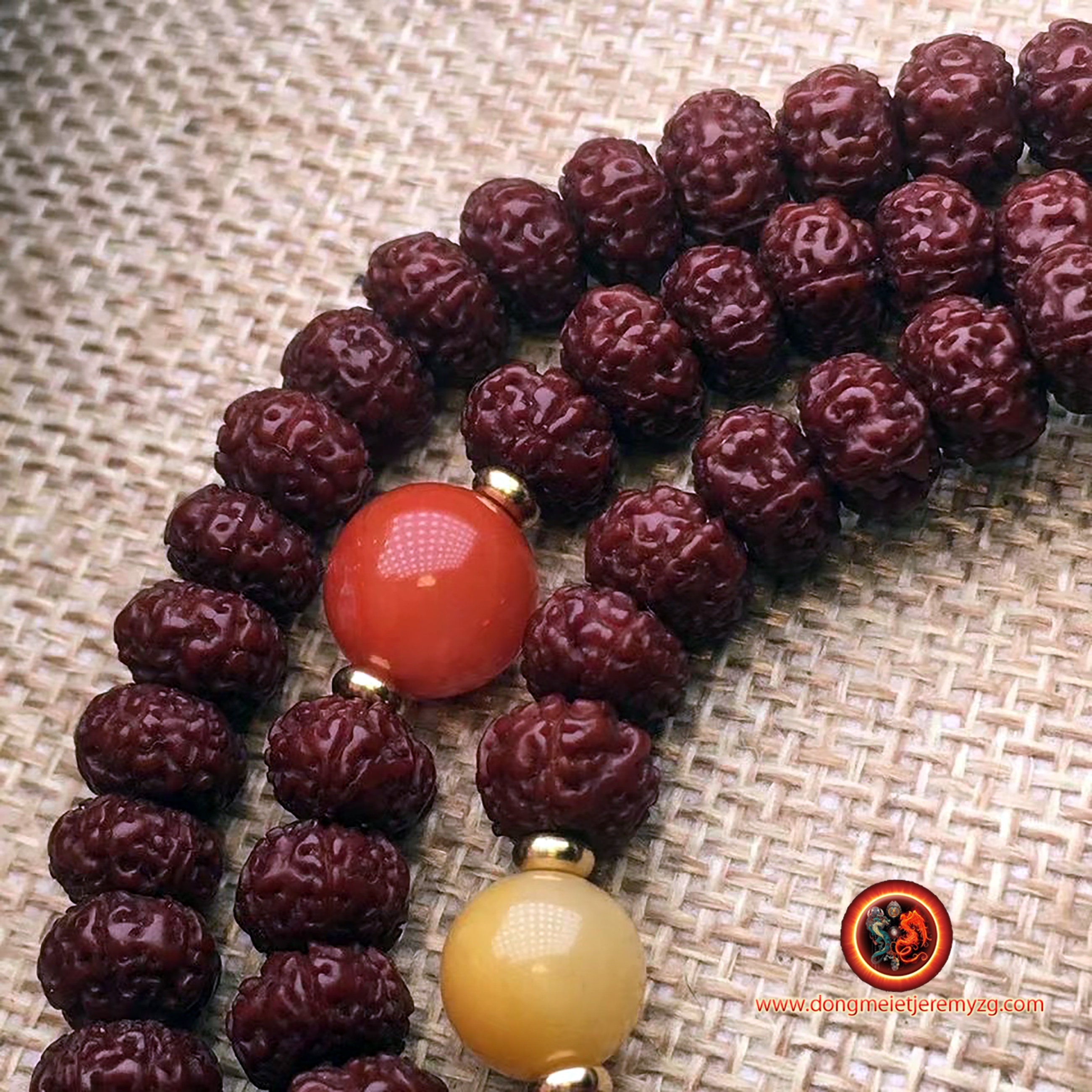 Tibetan mala, Buddhist prayer rosary and traditional meditation.
108 seeds of rudraksha.
Ganesh carved in an olive stone of brazil artisanally by us

108 high quality 5-sided rudrashka pearls, originally from Indonesia.
Dimension 8mm by 5.5mm
Rudraksha is a seed that is used as a prayer pearl in Hinduism (especially in shaivism), as well as in other traditions, such as Buddhism more recently When ripe, rudraksha seeds are covered with a blue outer fruit and are sometimes called blueberry pearls. The seeds are produced by several species of large, broad-leaved and evergreen trees of the genus Elaeocarpus , the principle of which is Elaeocarpus ganitrus . The seeds are associated with the Hindu god Shiva and are commonly worn to protect themselves and to chant mantras such as Om Namah Shivaya (Devanagari: ॐ नमः शिवाय; IAST: Om Namaḥ Śivāya). The seeds come mainly from India, Indonesia and Nepal for jewelry and malas; they are valued in the same way as semi-precious stones. Various meanings and interpretations are attributed to pearls with different numbers of segments or seed locules (mukh), and rare or unique pearls are highly prized and valuable.

Rudra is one of the Vedic names of Shiva and Akṣa means "tears". Thus defined, the name means "the tears of Lord Rudra".

Elaeocarpus ganitrus trees grow to 60–80 feet (18–24 m) and are found from the Ganges Plain in the foothills of the Himalayas in Nepal, South and Southeast Asia, parts of Australia to Guam and Hawaii.
Of the 300 species of Elaeocarpus, 35 are found in India. It is an evergreen tree that grows quickly. The rudraksha tree begins to bear fruit three to four years after germination. As the tree matures, the roots form buttresses, rising near the trunk and radiating to the soil surface.

Elaeocarpus ganitrus roxb can be found from sea level up to 3000 m (9800 ft). It tends to grow in narrow spaces rather than on open ground. Its leaves resemble those of tamarind or nux vomica but are longer. It gives between 1,000 and 2,000 fruits per year. These fruits are also known as Amritphala, (Fruits of Nectar).

Rudraksha seeds are covered with a blue outer shell when fully ripe and are also known as blueberry pearls. The blue color is not derived from the pigment but is structural.

There is a long tradition of wearing 108 rudraksha beads in India, especially in shaivism, due to their association with Shiva, who wears rudraksha garlands. The mantra Om Namah Shivaya is repeated (japa) using rudraksha beads. Hindus used Rudraksha malas as rosaries for meditation purposes and to sanctify the mind, body and soul.

Rudraksha beads can be strung together like a mala and used to count the repetition of a mantra or prayer in a manner similar to the use of rosaries in Christianity. Most garlands contain 108 beads plus one as 108 is considered sacred and an appropriate number of times to recite a short mantra. The extra pearl, called "Meru", bindu or "guru bead", helps mark the beginning and end of a cycle of 108 and has symbolic value as a "main" pearl. Rudraksha malas usually contain pearls in combinations 27 + 1, 54

Legend has it that a fight took place between the two ganesh, which the Buddhist won and tore off the Head of the Hindu in replacement of his own. More seriously, Ganesh was incorporated into Buddhism by its tantric form which originated in India in Odisha and then traveled first to Nepal by Indian traders, and to China, then to Japan which we will talk about a little below, the divinity having taken an interesting place in the Shingon and tendai forms of Buddhism of the Archipelago.

The Elephant God Ganesh (or Ganesha/Ganapati, also sometimes called siddhi data) is one of the most popular gods of Hinduism and is also widely represented both in the Temples of Theravada Buddhism (India, Thailand, Indonesia...) and in those of Vajrayana (Tibet, Nepal...). It plays an important role in Tantrism and is present in the Tibetan pantheon where it is recognized mainly as a deity of wealth but is also part of the attributes of some angry, somewhat frightening, terrible, secret and fearful deities, removing obstacles.