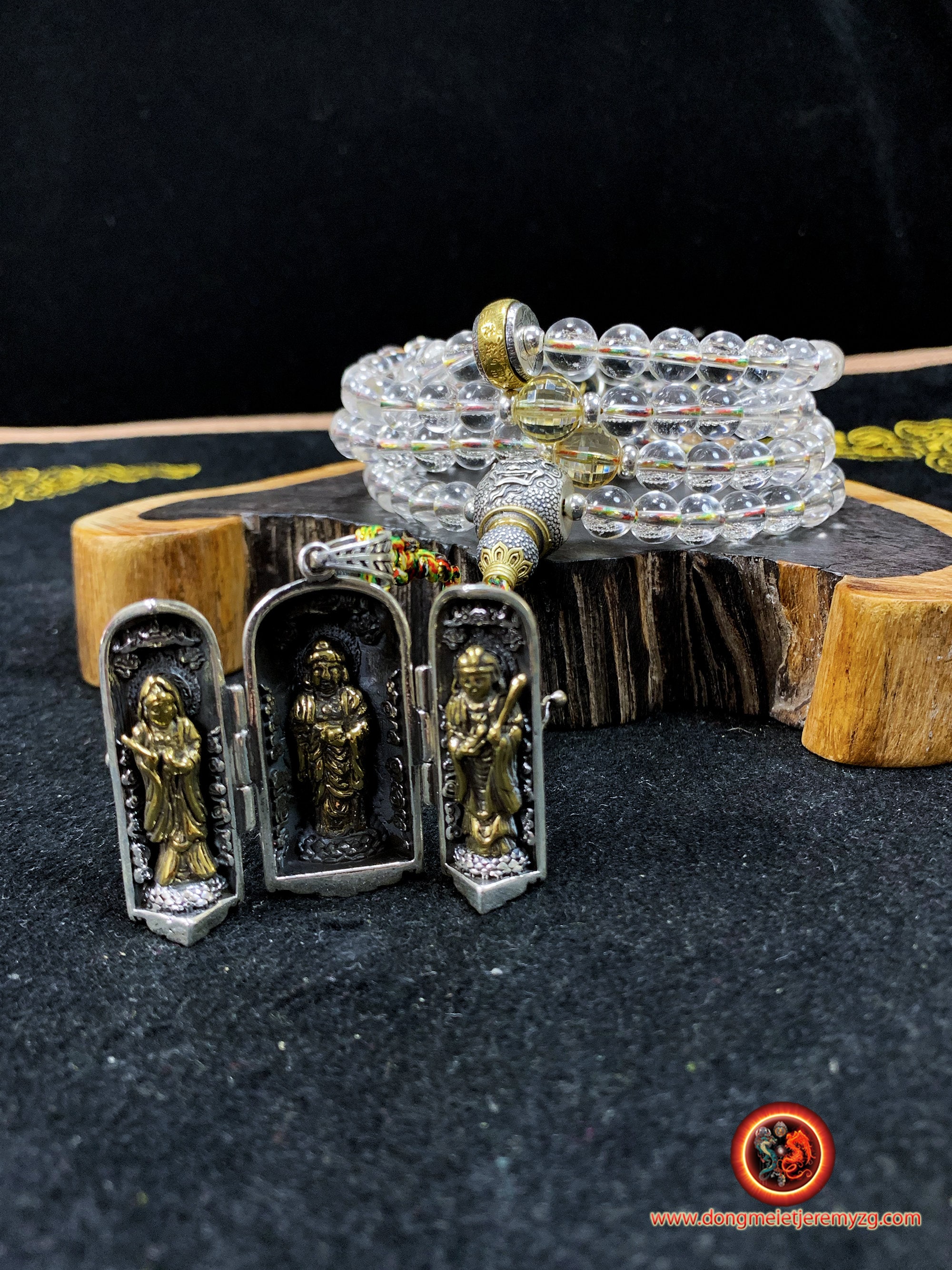 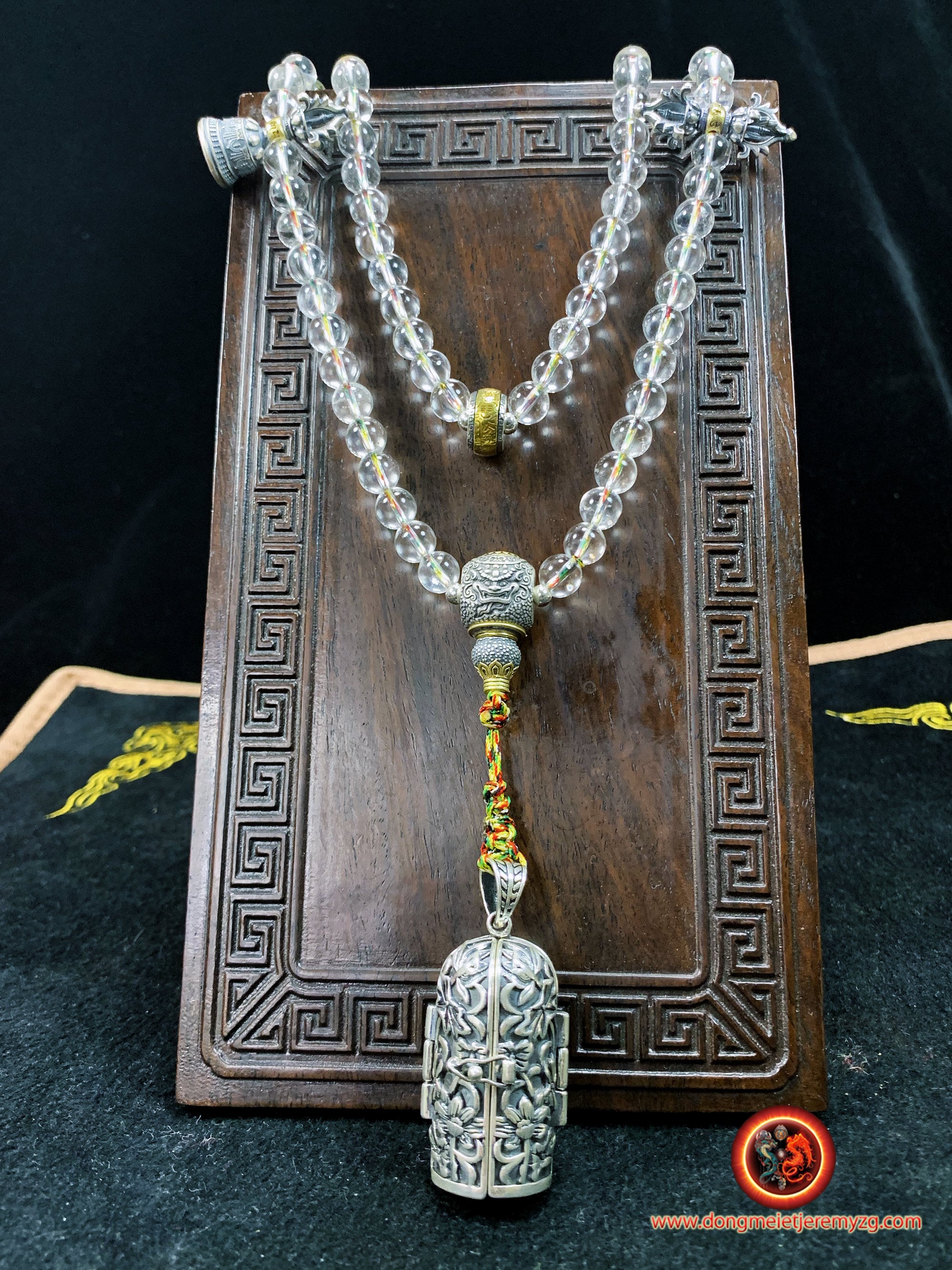 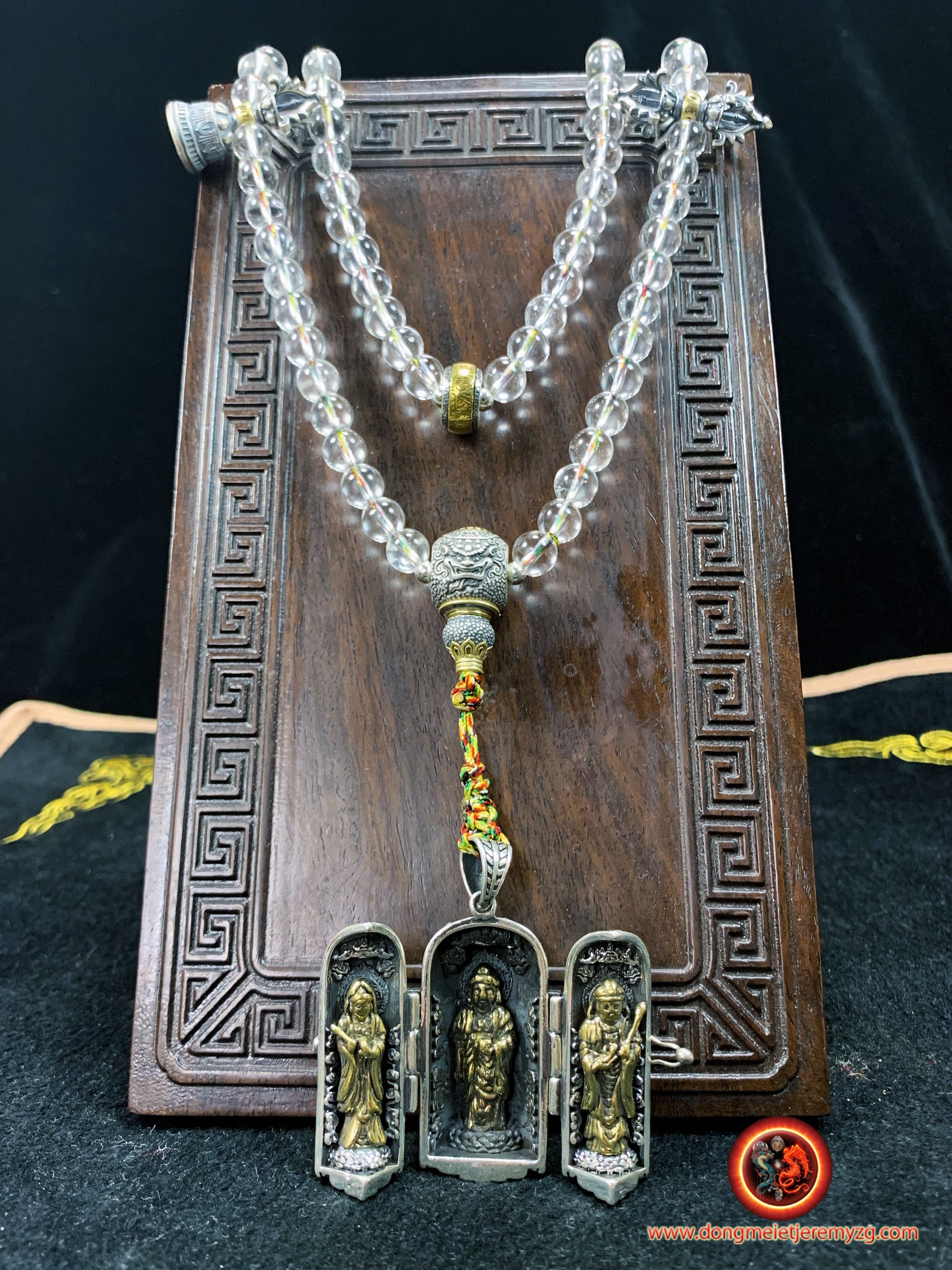 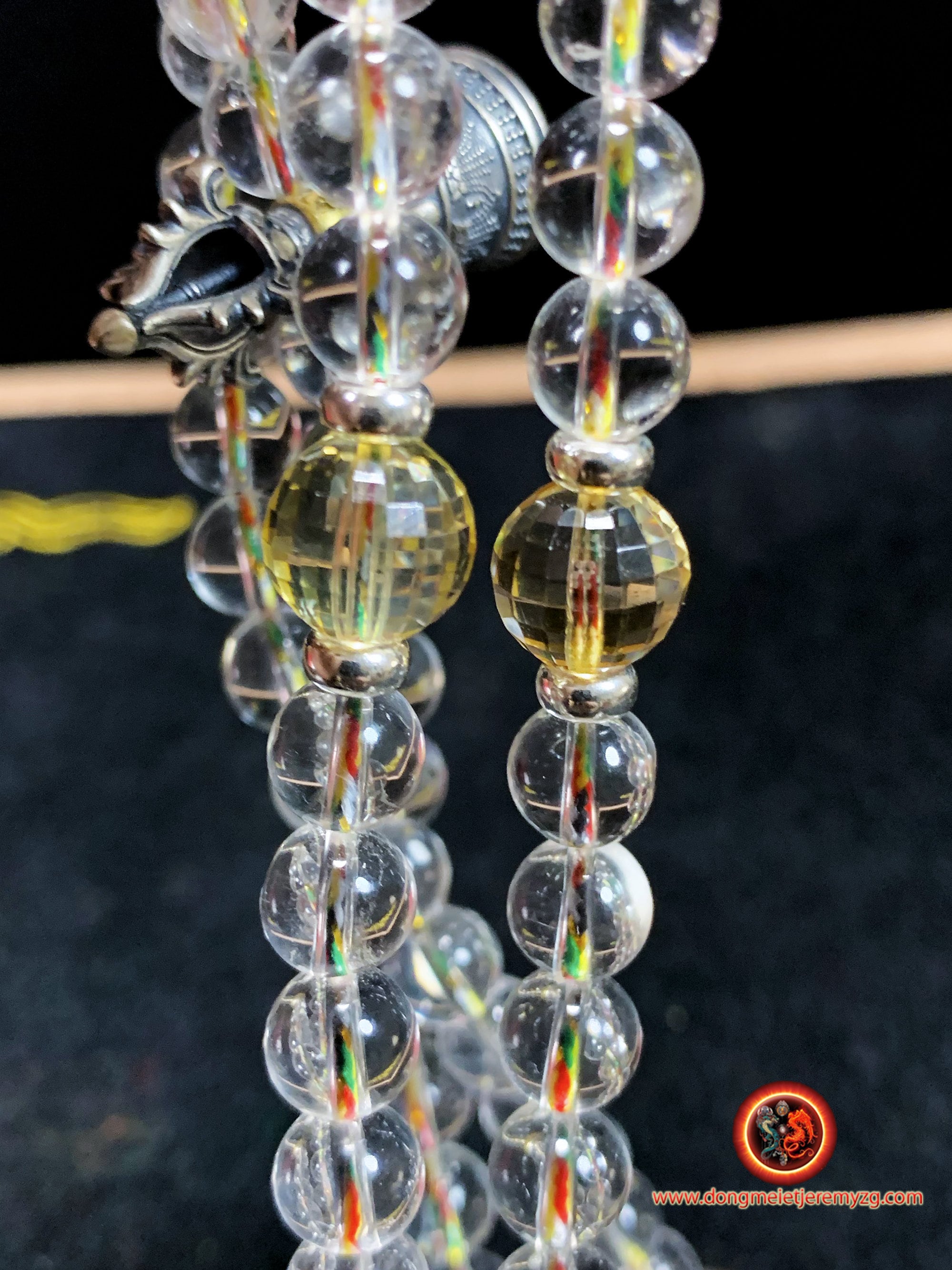 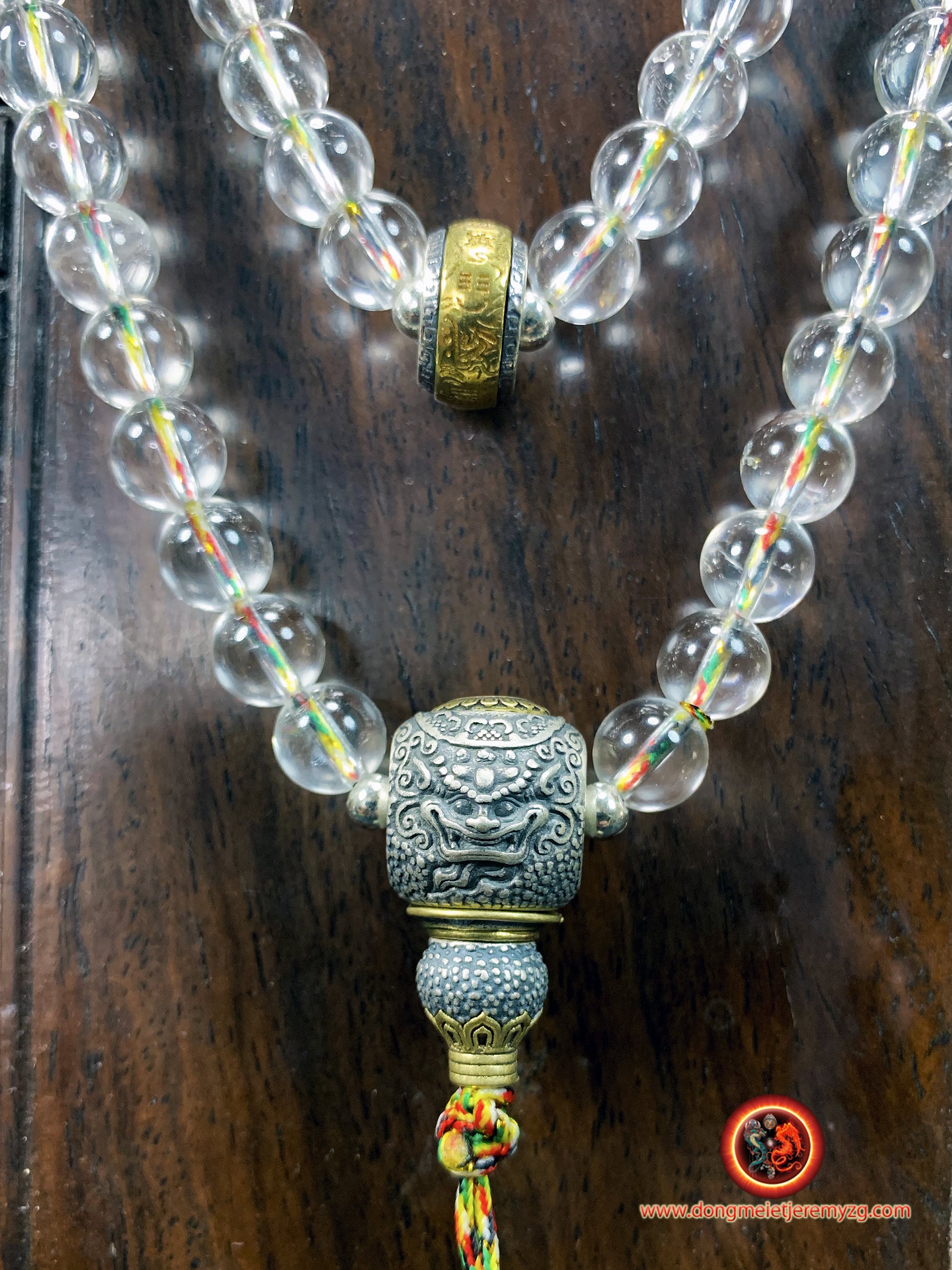 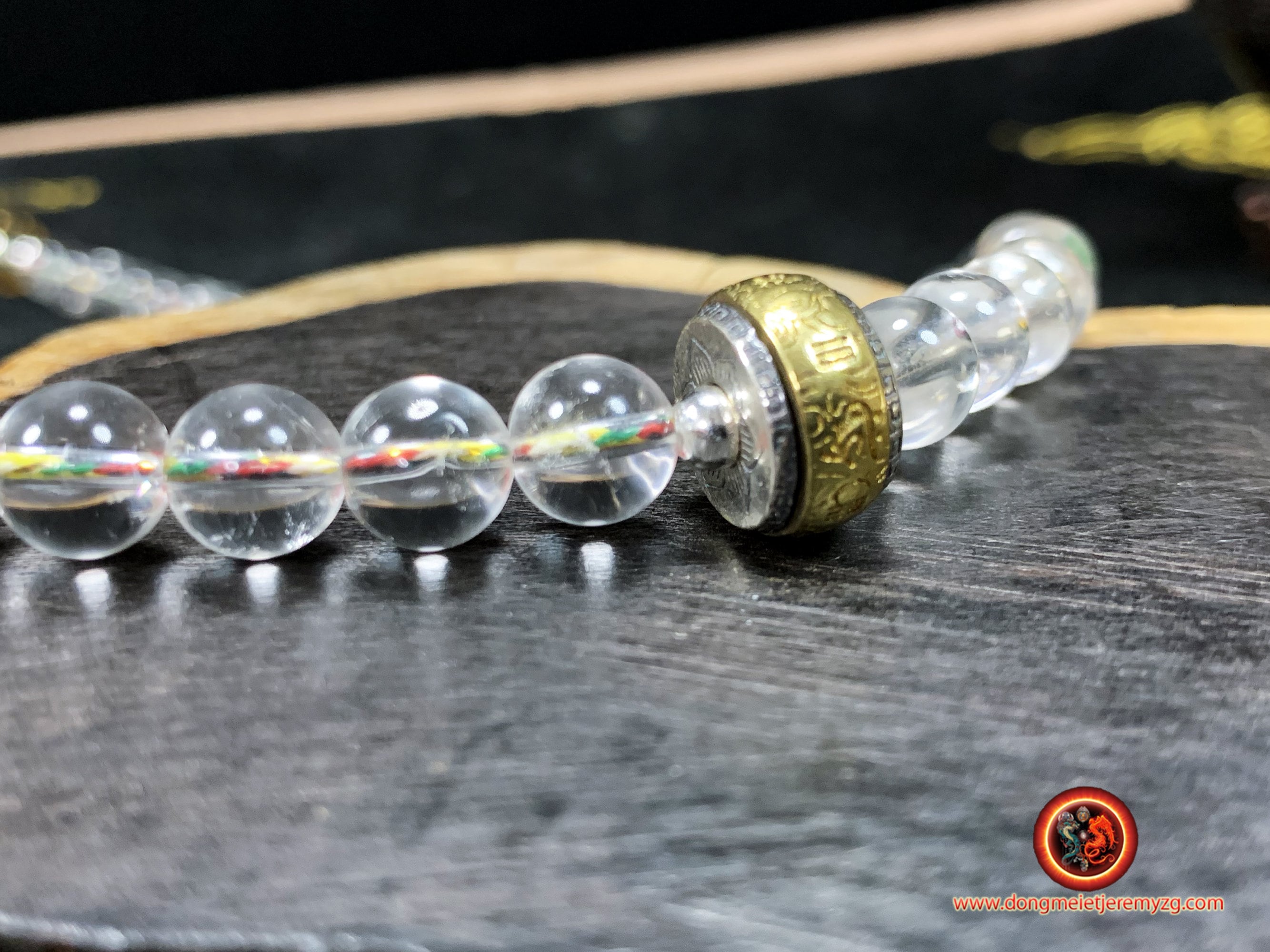 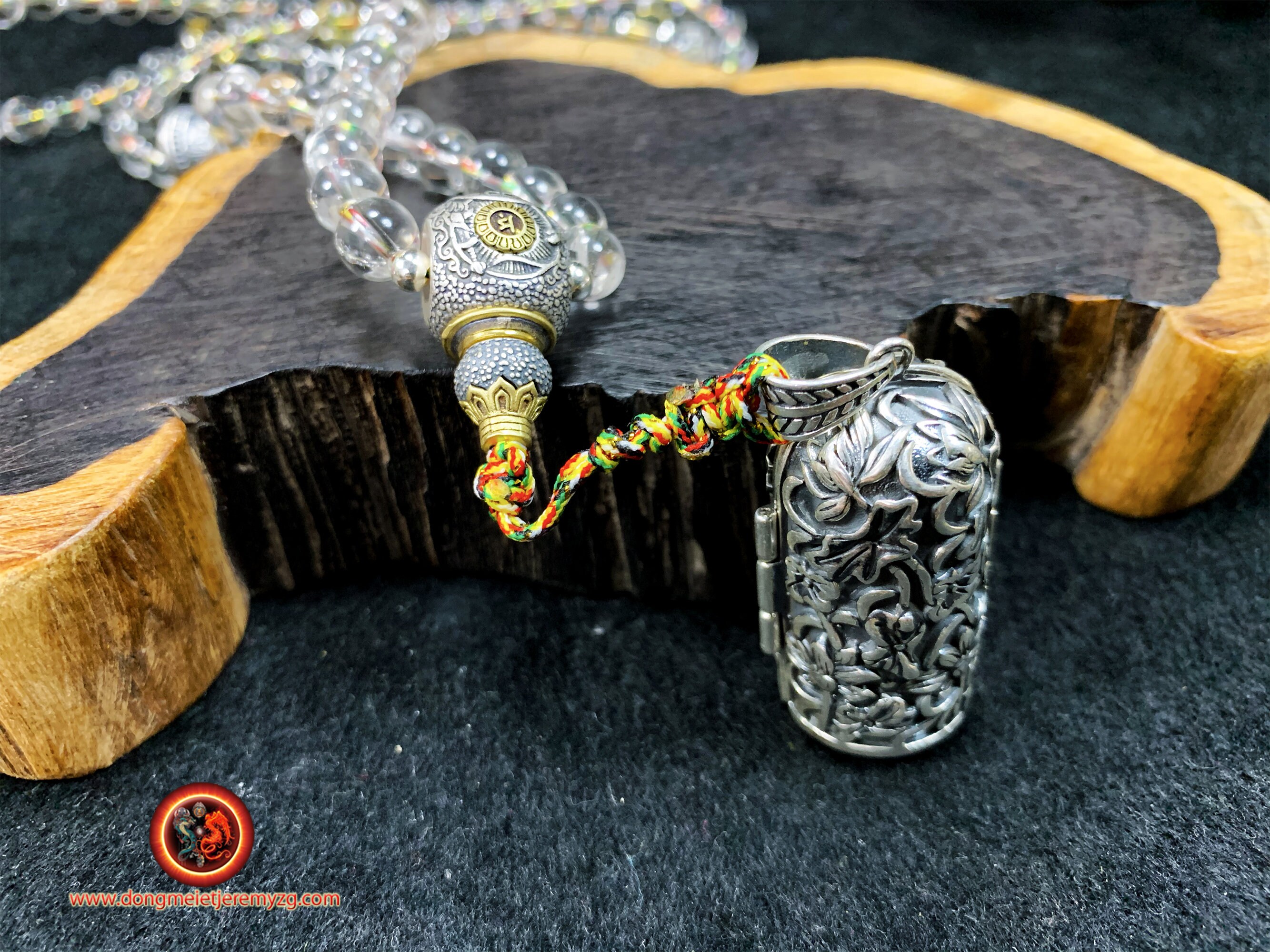 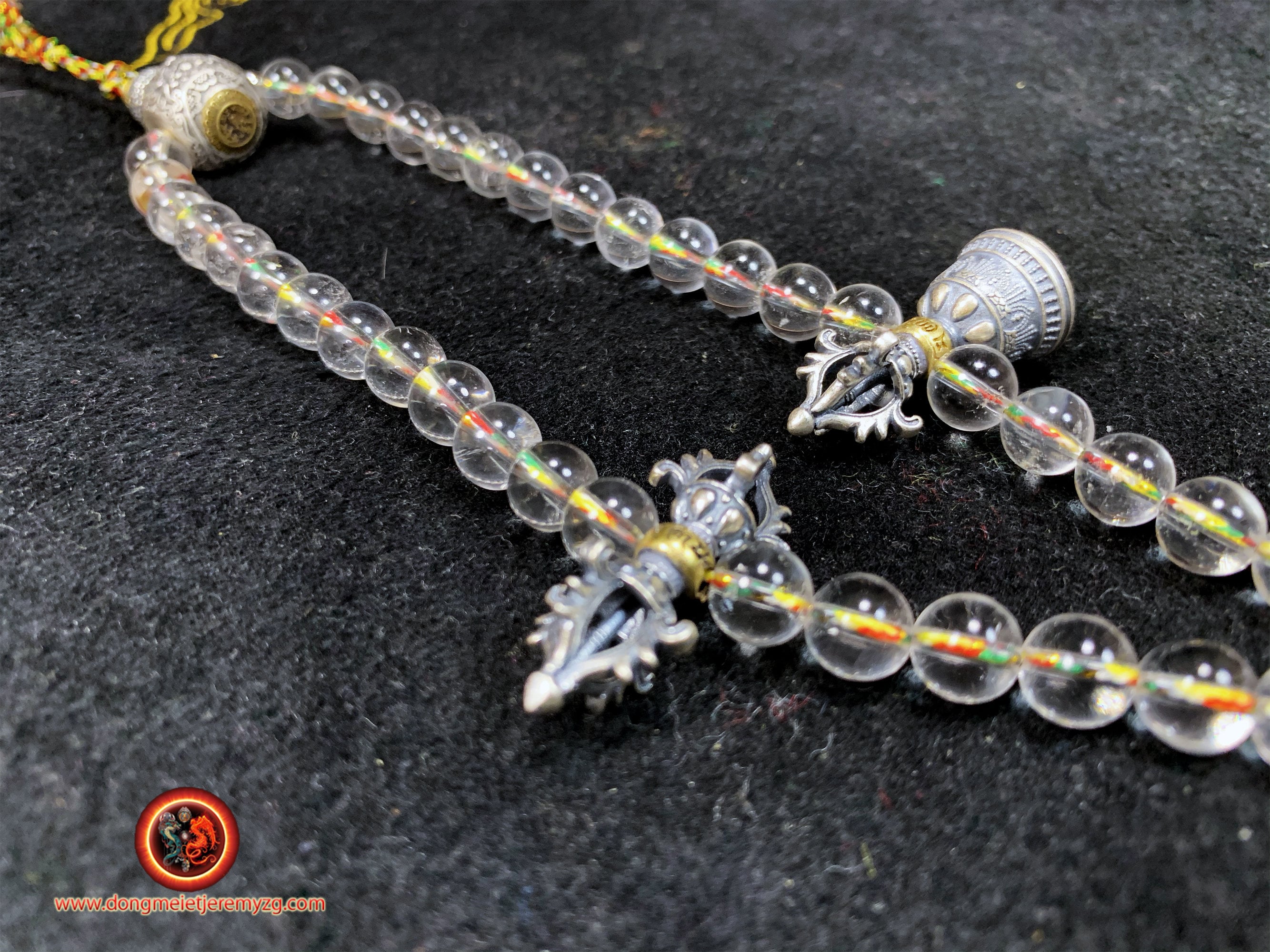 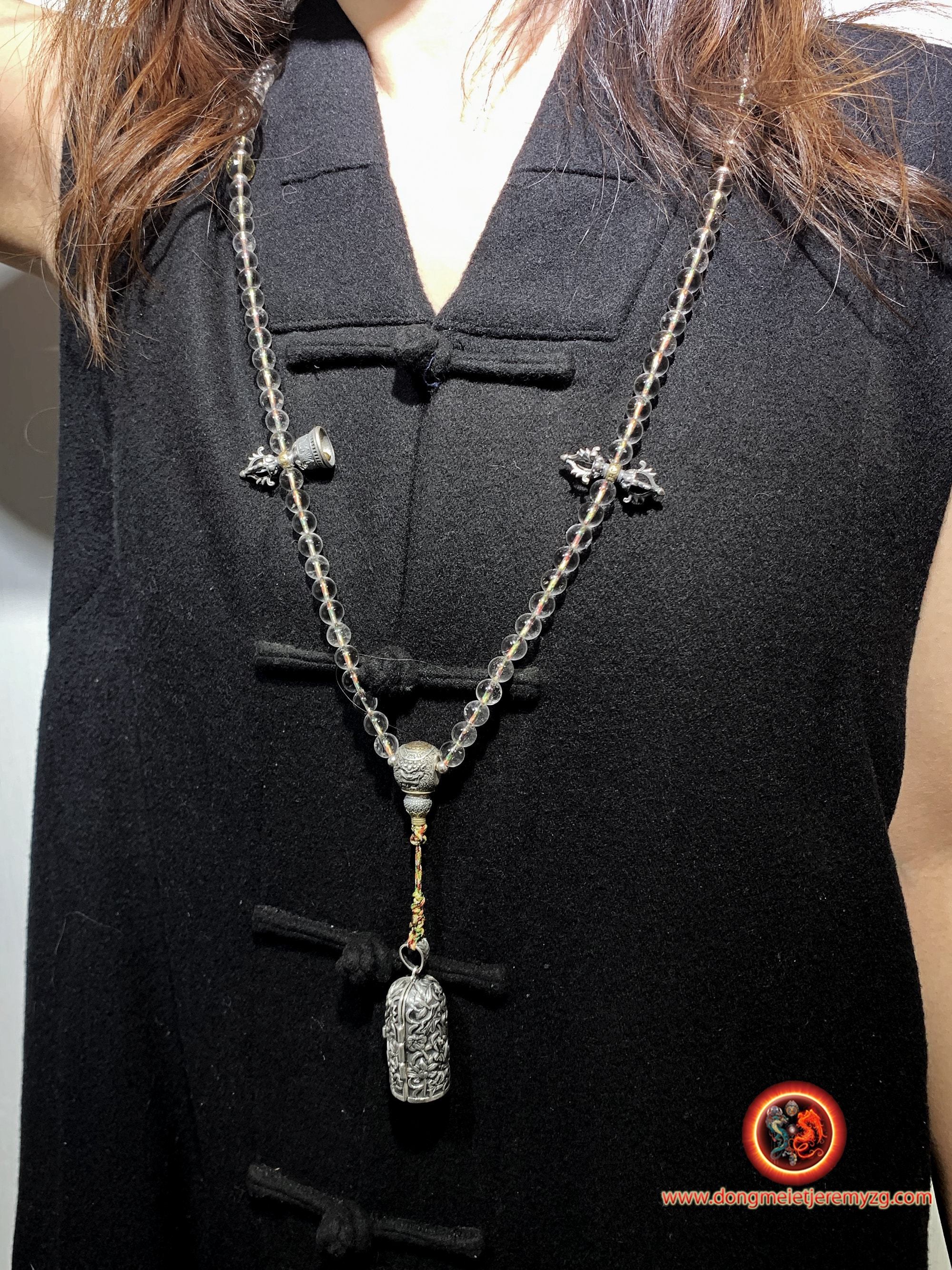 The ghau is a kind of transportable altar in which the image of the deity of choice of the possessor is kept, wrapped in silk clothes. The vast majority of Tibetans use ghau at home and carry it on their travels. They keep it on a real altar at home. When traveling, she is hung on the back belt. It serves as a protective symbol during travels and also allows its possessor to prove his devotion to his deity.

Amitābha is considered the creator Buddha of the Western Pure Land of Beatitude (Sukhāvatī) described in the Sutra of Contemplations of Infinite Life; the two great bodhisattvas Avalokiteśvara and Mahasthamaprapta are his two assistants.
they help him to welcome all those from all directions who have fulfilled the conditions to achieve it. That is why they are called "the three Saints of the West."

In the monasteries of the Pure Land or on effigies, they are presented together with Amitābha in the middle, Avalokiteśvara on his right (i.e. on our left) and Mahāsthāmaprāpta on his left (i.e. on our right). In popular Buddhism and chinese religion, Amitābha (Amituofo) and Avalokiteśvara (Guanyin) often have the same function: they both promised not to enter nirvana until all beings were there. Having faith in it, wanting it and constantly reciting their name are the three necessary conditions to enter this realm of infinite happiness.

The Buddha Amitābha, also known as Amida or Amitāyus, is a heavenly Buddha according to the scriptures of Mahayana Buddhism.
Amitābha is the main Buddha of Pure Land Buddhism, a branch of East Asian Buddhism. In Vajrayana Buddhism, Amitābha is known for its attribute of longevity, magnetizing western attributes of, discernment, pure perception and purification of aggregates with a deep awareness of the voidness of all phenomena.
According to these scriptures, Amitābha possesses infinite merit resulting from good deeds during countless past lives as a bodhisattva.named Dharmakāra. Amitābha means "Infinite Light", and Amitāyus means "Infinite Life", so Amitābha is also called "The Buddha of Immeasurable Light and Life".

According to the greatest Sutra of immeasurable life, Amitābha was, in very ancient times and perhaps in another universe of our multiverse, a monk named Dharmakāra. In some versions of the sutra, Dharmakāra is described as an ancient king who, after being in contact with Buddhist teachings through the Buddha Lokeśvararāja, renounced his throne. He then resolved to become a Buddha and create a buddhakṣetra (literally "Buddha field", often called pure land or Buddha's land, a kingdom existing in the primordial universe outside of ordinary reality, produced by the merit of a Buddha) possessed many perfections. These resolutions were expressed in his forty-eight vows, which defined the type of pure land.
Dharmakāra aspired to create, the conditions in which beings could be born in this world, and what kind of beings they would be when they were reborn there.

In the versions of the sutra widely known in China, Vietnam, Korea and Japan, dharmakāra's eighteenth vow was that every being in a universe desiring to be reborn in pure land and invoking his name with sincerity, even ten times will have a guaranteed rebirth. His nineteenth vow promises that he, along with his bodhisattvas and other blessed Buddhists, will appear before those who, at the time of death, invoke it. This openness and acceptance of all kinds of people has made the belief in pure lands one of the major influences of Mahāyāna Buddhism. Pure Land Buddhism seems to have become popular for the first time in Gandhara, from where it spread to Central Asia and China.

The sutra goes on to explain that Amitābha, after accumulating great merit over countless lives, finally attained Buddhistness and created a pure land called Sukhāvatī. Sukhāvatī is located in the far west, beyond the limits of our own world. Through the power of his vows, Amitābha has allowed all those who invoke him to be reborn on this earth, to be taught there in dharma and to eventually become bodhisattvas and Buddhas in their turn (the ultimate goal of Mahāyāna Buddhism). From there, these same bodhisattvas and Buddhas return to our world to help the sensitive beings, mles guiding towards Buddhahood
Amitābha is the Buddha of global love. He lives in the west (represented as a Buddha in meditation, he is one of the 5 Buddha dhyanis) and works for the enlightenment of all beings (represented as a Buddha of blessing). His most important illumination technique is the visualization of the surrounding world as a paradise. Those who see the world as a paradise awaken their energy of enlightenment. The world can be seen as a paradise by a corresponding positive thought (thought of enlightenment) or by sending light to all beings (wishing that all beings are happy). After the Amitābha doctrine, one can come to paradise (in the Pure Land of Amitābha), if they visualize at their death Amitābha in the sky (sun) above their head (Western horizon), think of his name as a mantra and leave the body as a soul through the crown chakra (what tibetans call the transfer of consciousness or "Powa"

Amitābha is also known in Tibet, Mongolia and other regions where Tibetan Buddhism is practiced. In the Supreme Yogatantra of Tibetan Buddhism, Amitābha is considered one of the five Dhyāni Buddhas (along with Akṣobhya, Amoghasiddhi, Ratnasambhava and Vairocana), which is associated with western leadership and skandha of his ofjñā, the aggregate of distinction (recognition) and the deep awareness of individualities. His wife is Pāṇḍaravāsinī. His two main disciples (the same number as Gautama Buddha) are the bodhisattvas Vajrapani and Avalokiteśvara, the first to his left and the second to his right. In Tibetan Buddhism, there are a number of famous prayers to be reborn in Sukhāvatī (Dewachen). One of them was written by Je Tsongkhapa at the request of Manjushri

The Panchen Lamas and Shamarpas are considered emanating from Amitābha.
In Shingon Buddhism, the Japanese vajrayana, heir to the Chinese esoteric Buddhism the tangmi, Amitābha is considered one of the thirteen Buddhas to whom practitioners can pay tribute. Shingon, like Tibetan Buddhism, also uses special devotional mantras for Amitābha, although the mantras used differ. Amitābha is also one of the Buddhas featured in the mandala of the kingdom of the womb used in Shingon practices, and lies to the west, where the Pure Land of Amitābha is believed to dwell.

Amitābha is the center of a number of mantras in vajrayana practices. The Sanskrite form of the Amitābha mantra is oṃ amitābha hrīḥ ), which is pronounced in its Tibetan version as Om ami dewa hri
His mantra in Shingon Buddhism is On amirita teizei kara un
which represents the underlying Indian form oṃ amṛta-teje hara hūṃ .
In addition to using the mantras listed above, many Buddhist schools invoke the name Amitābha in a practice known as nianfo in Chinese and nembutsu in Japanese.

Mahāsthāmaprāpta is a bodhisattva mahāsattva that represents the power of wisdom. Its name literally means "the arrival of the great force".

In Chinese Buddhism, she is usually portrayed as a woman, with a similar resemblance to Avalokiteśvara. He is also one of the thirteen Buddhas of the Japanese school of Shingon Buddhism. In Tibetan Buddhism, Mahāsthāmaprāpta is equated with Vajrapani, who is one of his incarnations and was known as the protector of Gautama Buddha.

Mahāsthāmaprāpta is one of the oldest bodhisattvas and is considered powerful, especially in the Pure Land school, where he plays an important role in the great Infinite-Life Sutra.

In the Śūraṅgama Sūtra, Mahāsthāmaprāpta tells how he gained enlightenment through the practice of nianfo, or the pure and continuous attention of Amitābha, to obtain samādhi. In the Amitayurdhyana Sutra, Mahāsthāmaprāpta is symbolized by the moon while Avalokiteśvara is represented by the sun.

In the introductory chapter of the Lotus Sutra, Mahāsthāmaprāpta is present among the 80,000 bodhisattva mahāsattvas who gather on Mount Gṛdhrakūṭa to hear the Buddha's preaching on the wonderful Lotus Flower Sutra Dharma. The Buddha also addresses Mahāsthāmaprāpta in chapter 20 of the Lotus Sutra to recount the Buddha's past life as Bodhisattva Sadāparibhūta ("Never Despise"), a monk who was mistreated and insulted by arrogant monks, nuns, lay people and laity when he paid tribute to them by saying that they would all become Buddhas. The Buddha explains to Mahāsthāmaprāpta how these arrogant people were punished, but are now bodhisattvas present in the congregation on the path to enlightenment. The Buddha then praises the great strength of the Lotus Sutra thus: "O Mahāsthāmaprāpta, know that this Lotus Sutra will greatly benefit the bodhisattva mahāsattvas and lead them to the highest and most complete enlightenment. For this reason, after the parinirvāṇa of the Tathāgata, the bodhisattva mahāsattvas should always preserve, recite, explain and copy this sutra.