netsuke, Representation Half Buddha half demon handcuted in deer antler painted from pigments made of minerals. 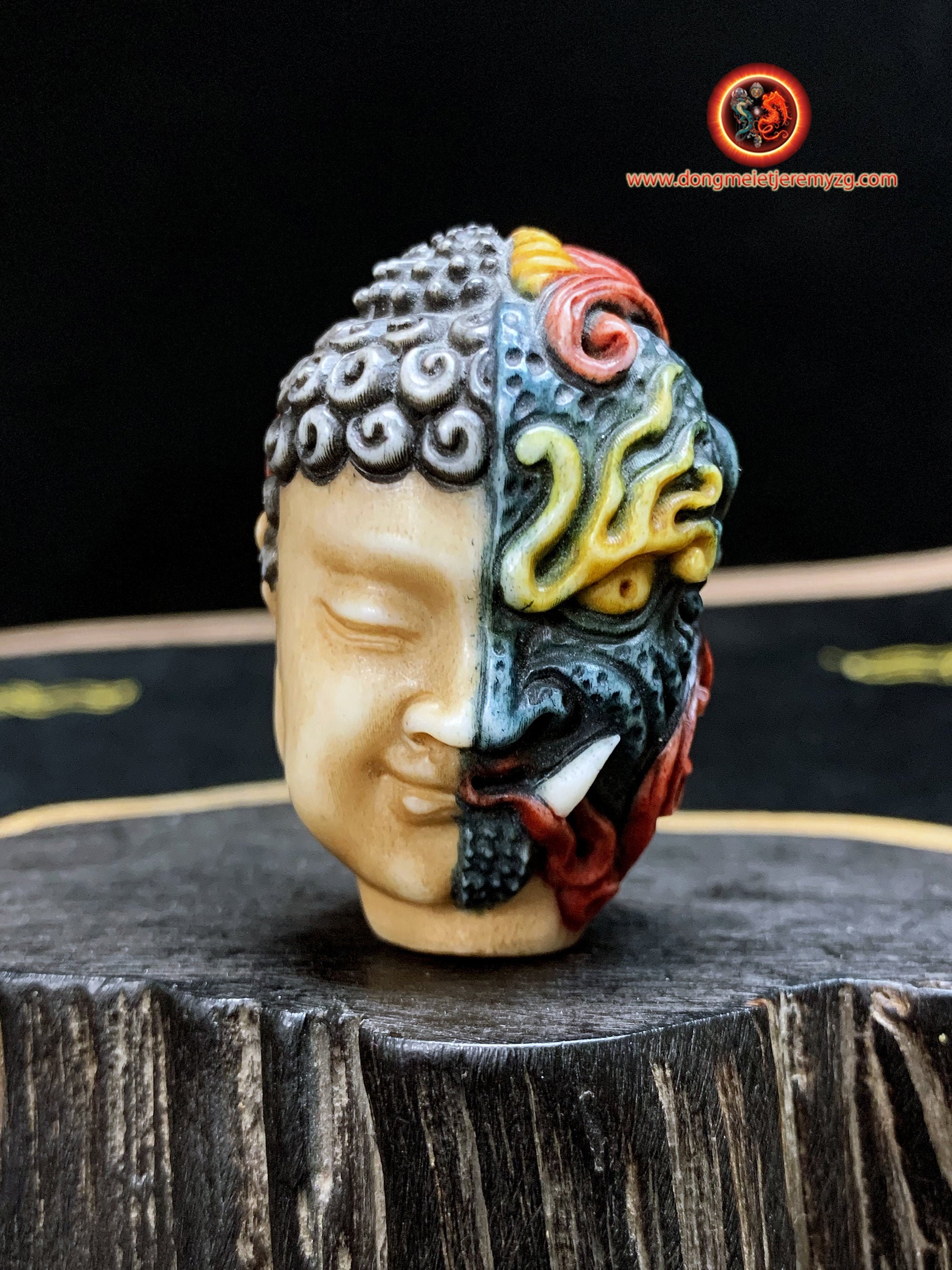 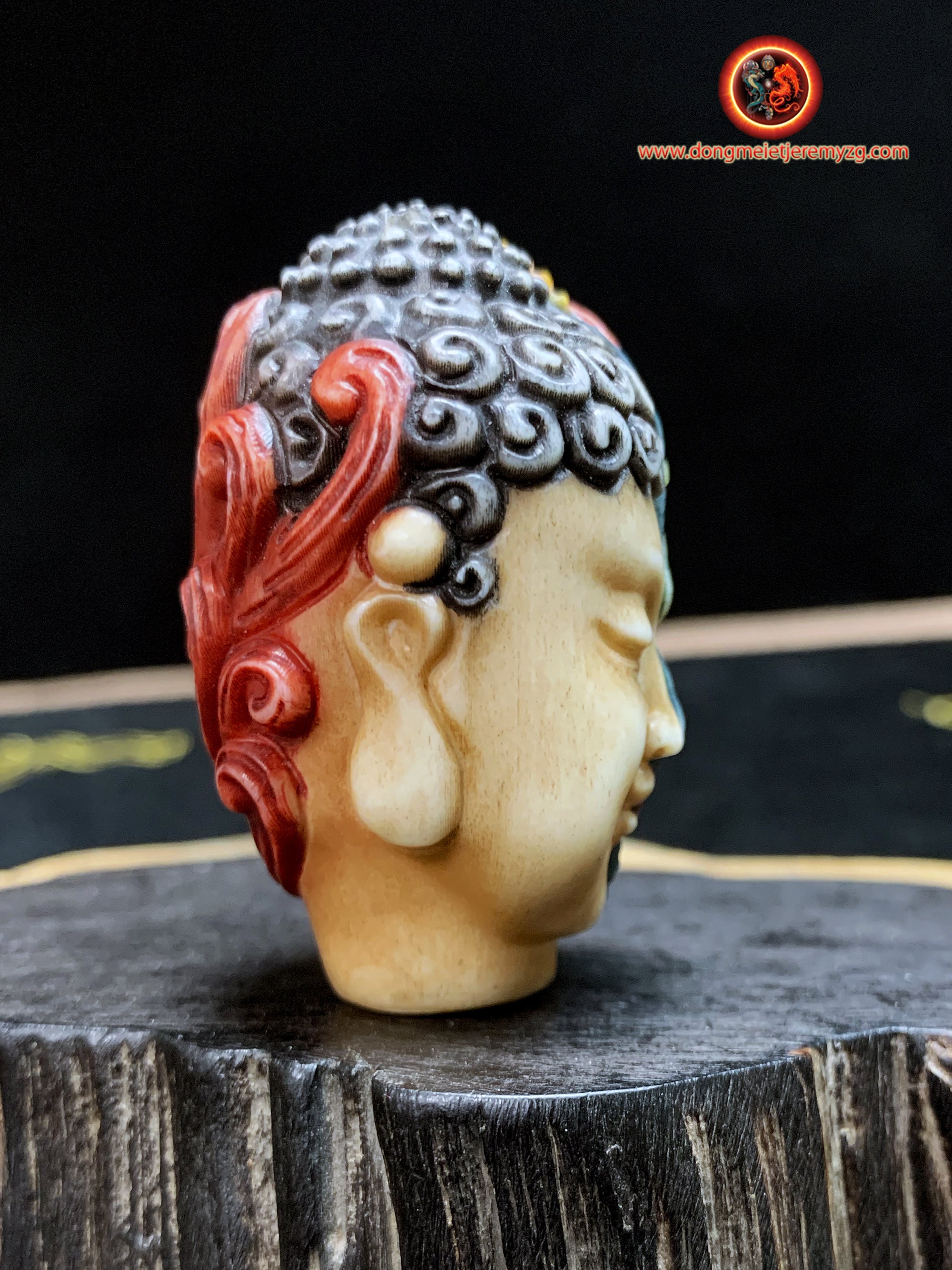 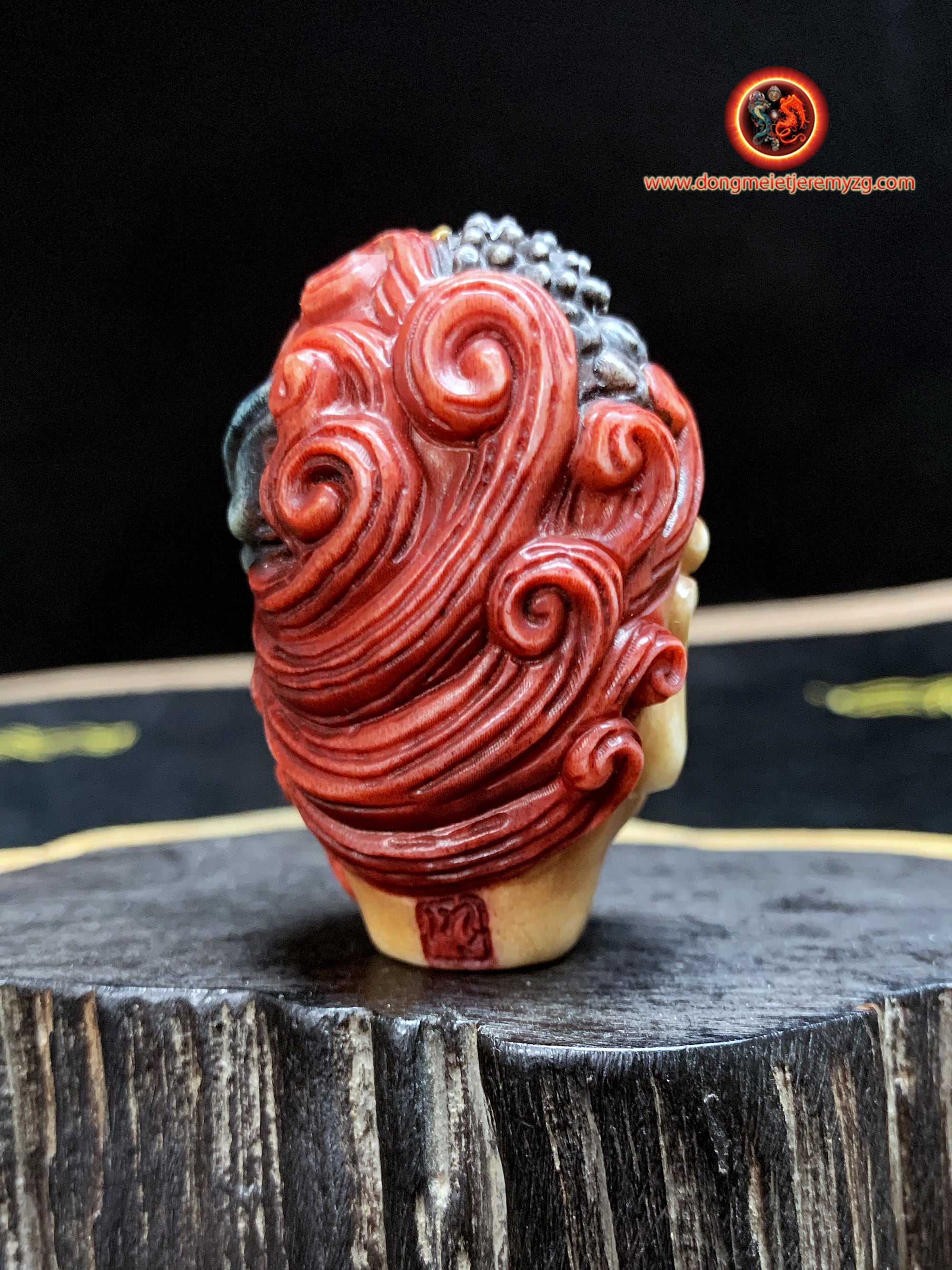 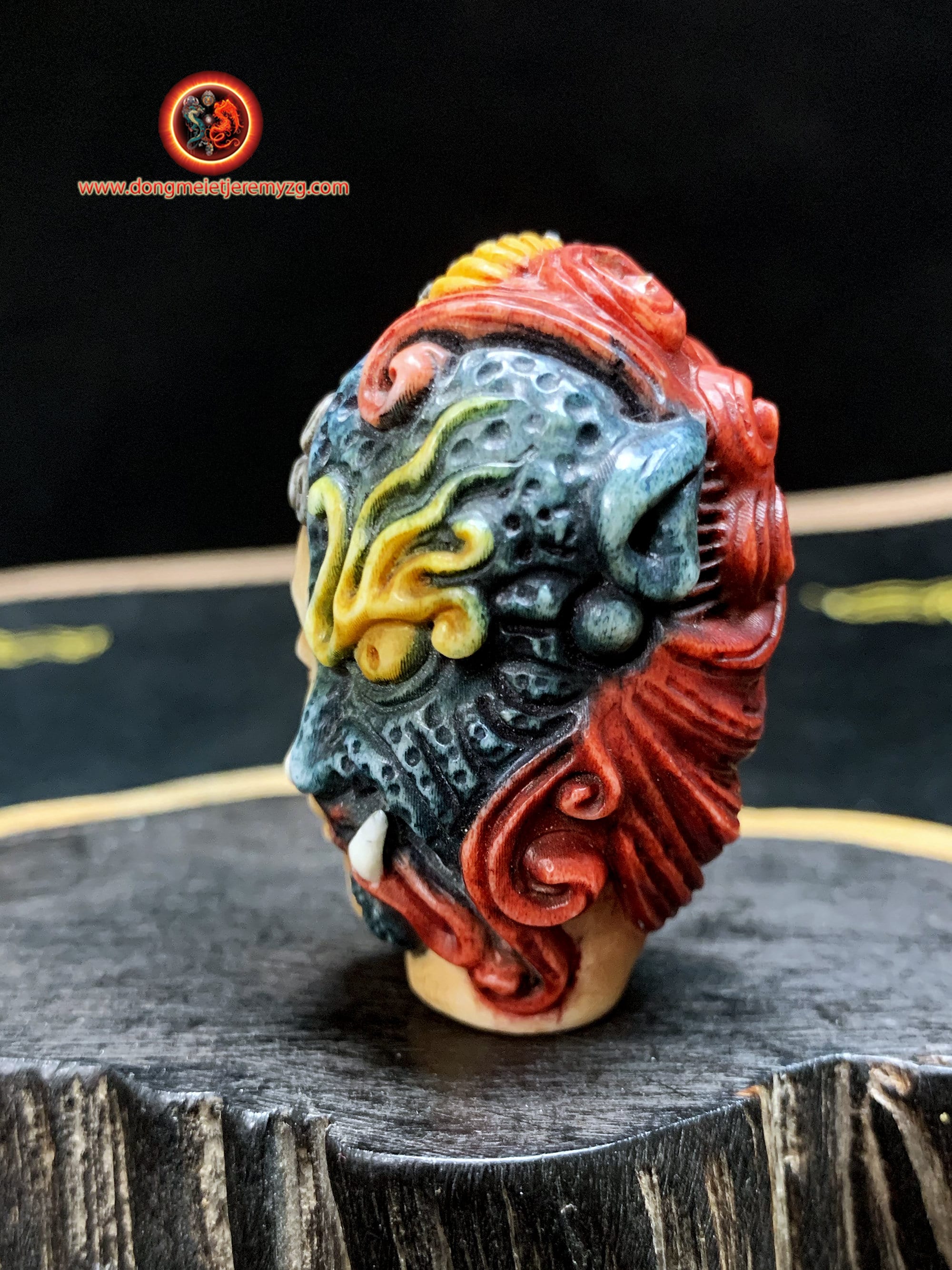 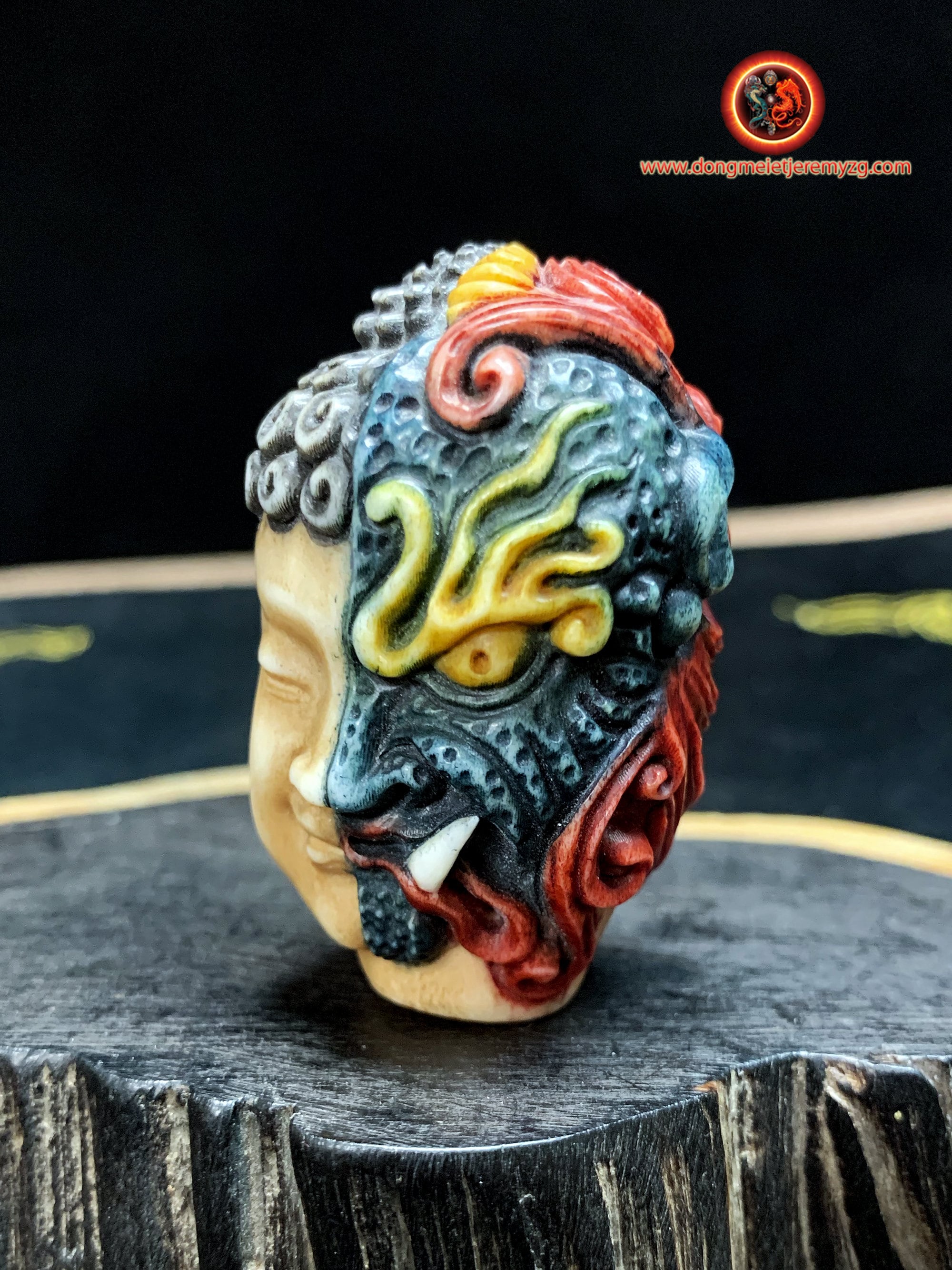 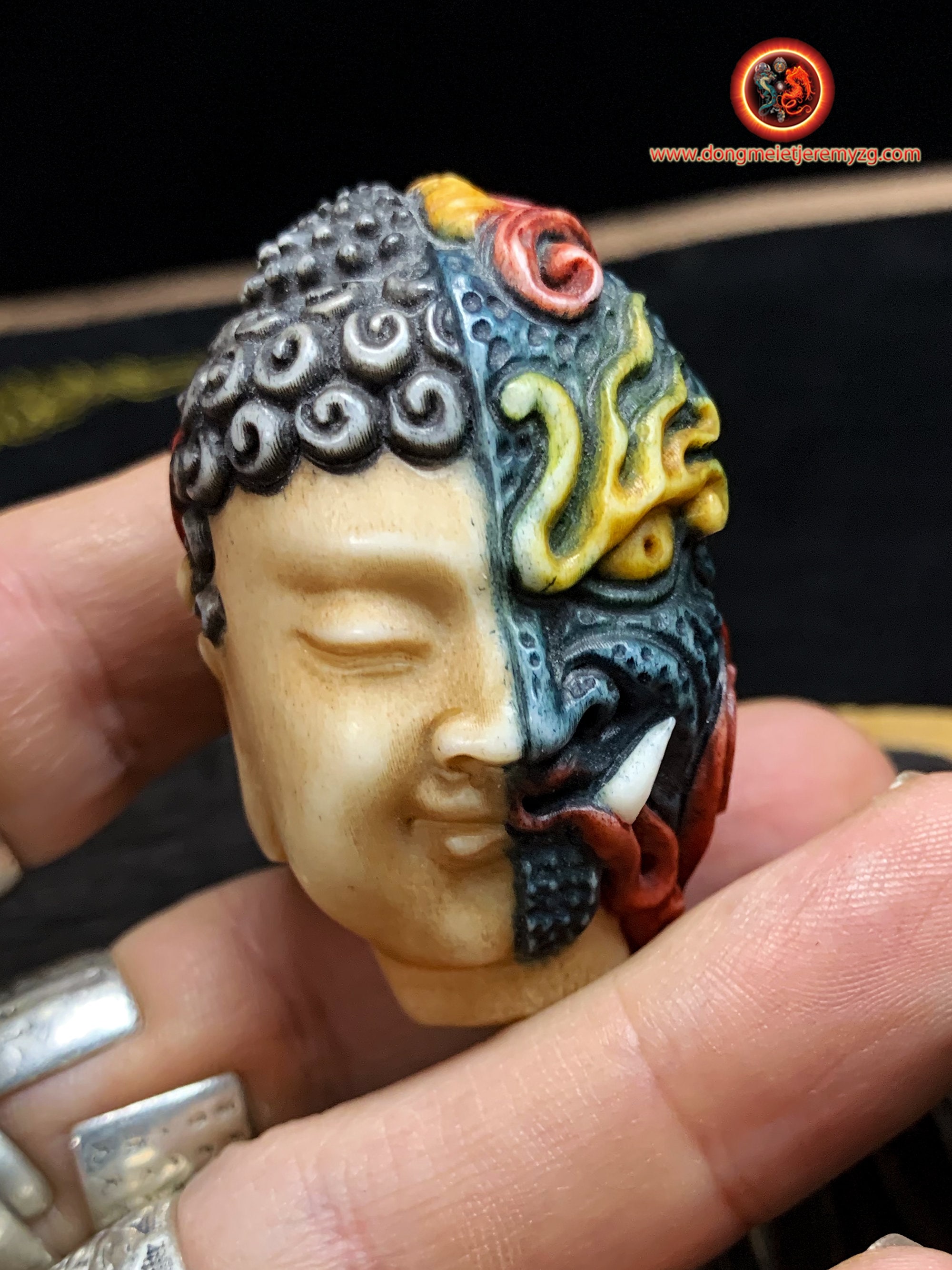 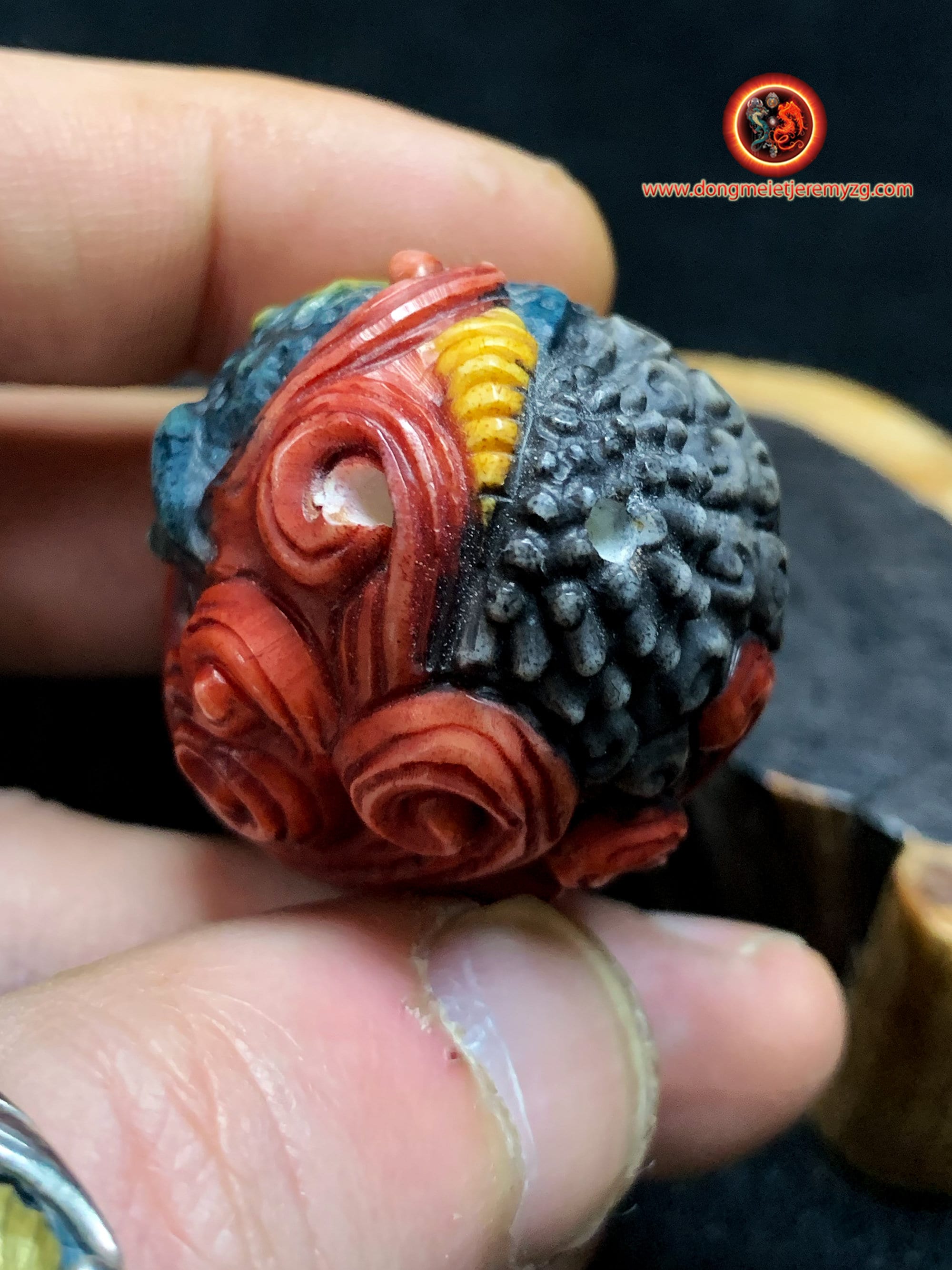 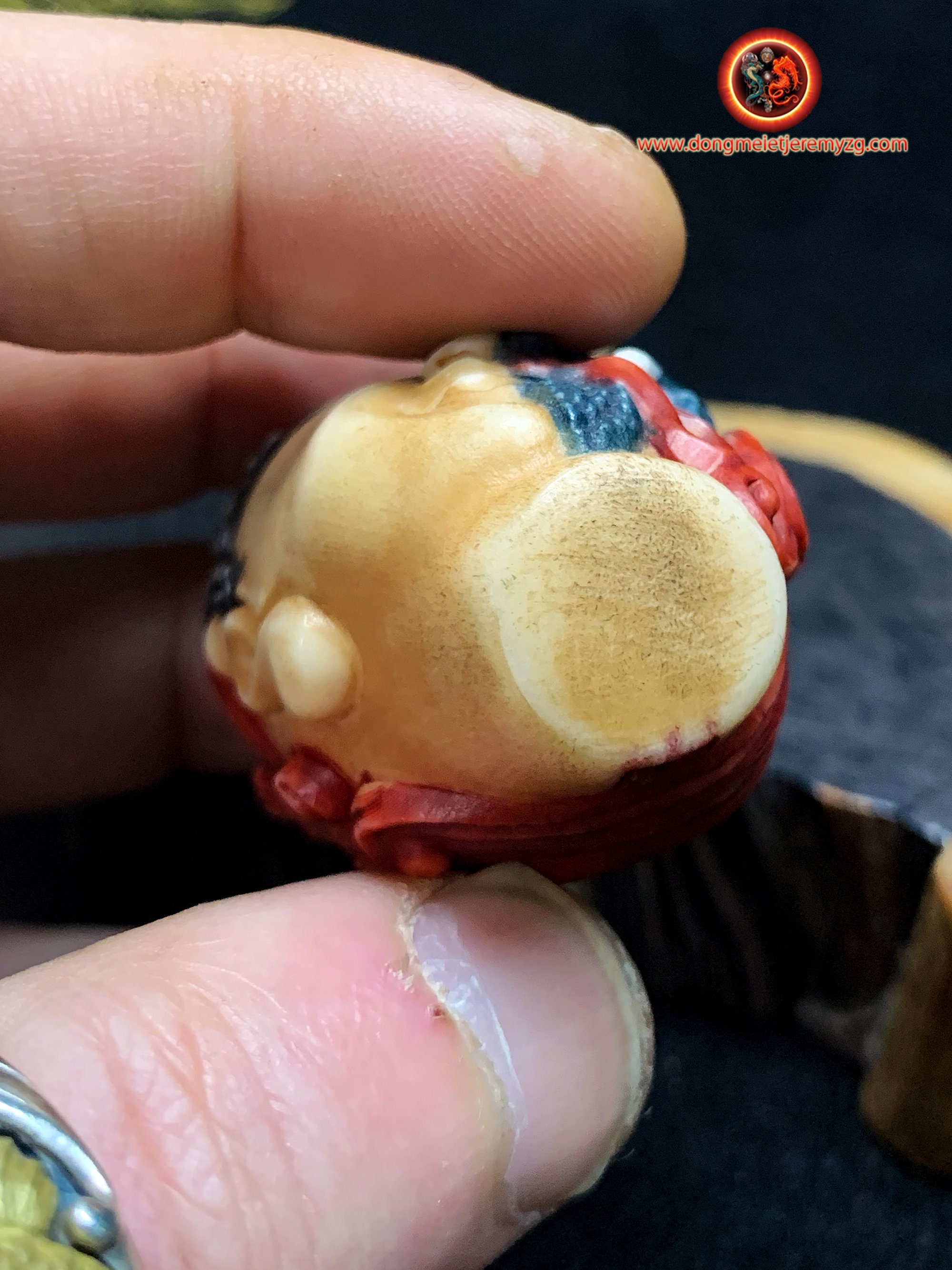 Video available via this link

n netsuke is a miniature sculpture, originating in 17th century Japan. Initially a button closure simply carved on the cords of an inro box, netsuke then developed into richly carved handicrafts.
Traditionally, Japanese clothing - the kosode and its later evolution, the kimono - had no pockets. Although the kimono sleeves could be used to store small objects, the men who wore the kimono needed a larger and stronger container in which to store their personal belongings, such as pipes, tobacco, silver and seals, which resulted in the development of containers known as sagemono, which were suspended by cords from the belts of the dresses ( obi).

These containers may have been pouches or small woven baskets, but the most popular were handmade boxes (inro) held closed by ojime, sliding beads on ropes. Whatever the shape of the container, the fastener that attached the cord to the top of the belt was a sculpted button-shaped rocker called netsuke. Netsuke, like the inro and the ojime, has evolved over time from a strictly utilitarian status to objects of great artistic value and an expression of extraordinary craftsmanness. Netsuke production was the most popular during the Edo period (1615-1868).

Today, netuke production continues and some modern netukes can reach high prices in the UK, Europe, US, Japan and elsewhere

The existence of demons and monsters is often crucial for a religious system. These scary Buddhist monsters don't exist just to scare you - they symbolize the vile and perverse aspects of human nature. Buddhists believe that every human being possesses the nature of Buddha and can attain enlightenment, but also that humans are intrinsically predisposed to yield to their lowest desires, such as greed, ego, lust and anger. The frightening demons of Buddhism generally embody unclean thoughts and desires that lead to negative behavior, although some are simply frightening reminders to do only good things.

Many supernatural creatures populate Buddhist literature, but among these, Mara is unique. He was one of the first non-human beings to appear in Buddhist scriptures. It is a demon, sometimes called the Lord of Death, who plays a role in many stories of the Buddha and his monks.


Mara is best known for her role in the Buddha's historical enlightenment. This story has been mythologized as a great battle with Mara, whose name means "destruction" and which represents the passions that trap and deceive us.

it is important to understand that Buddhists understand "evil" differently from how it is understood in most other religions.

In addition, Mara is a relatively minor figure in Buddhist mythology compared to Satan. Satan is the lord of hell. Mara is the lord of only the highest Deva paradise in the world of Triloka Desire, which is an allegorical representation of the adapted reality of Hinduism.