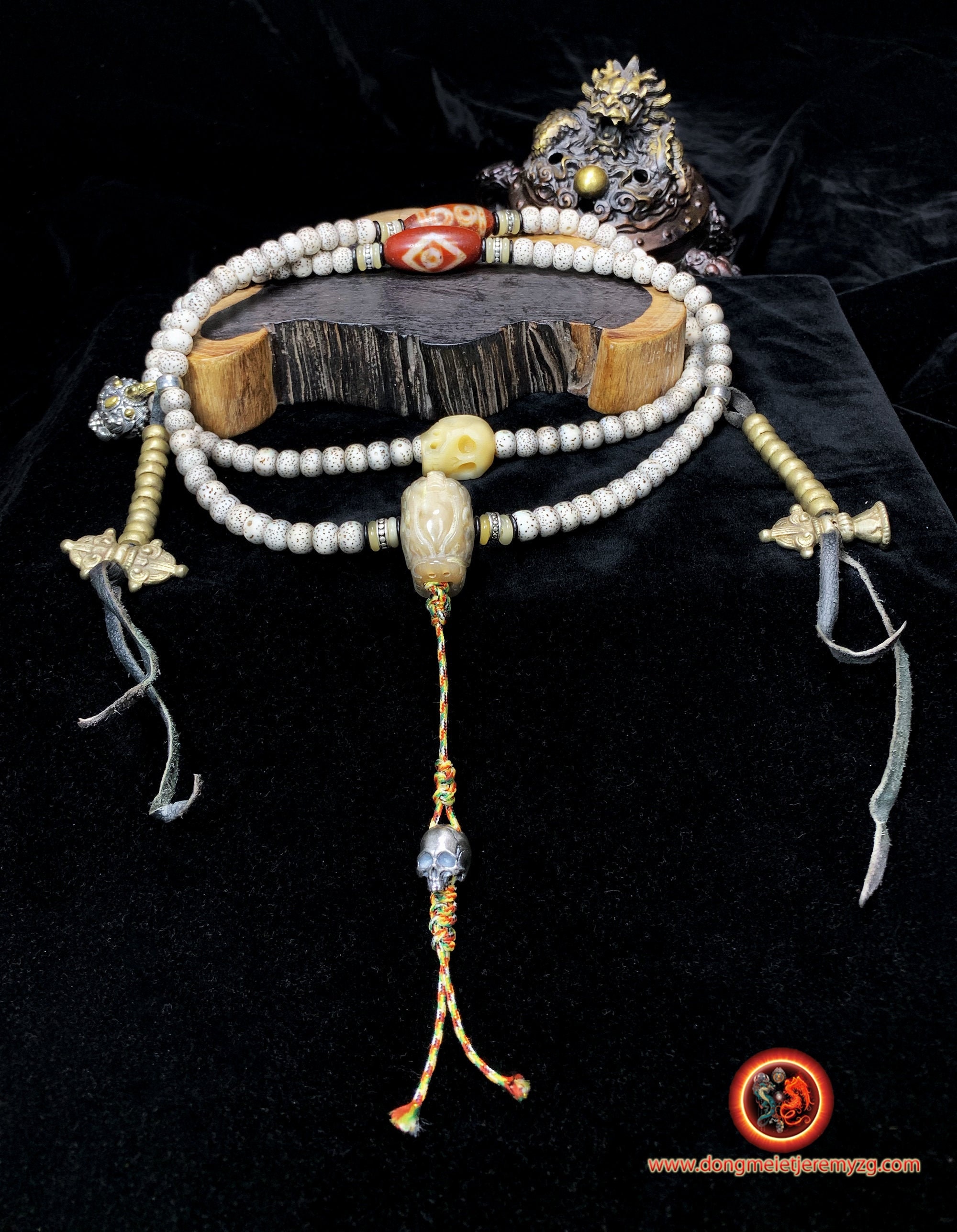 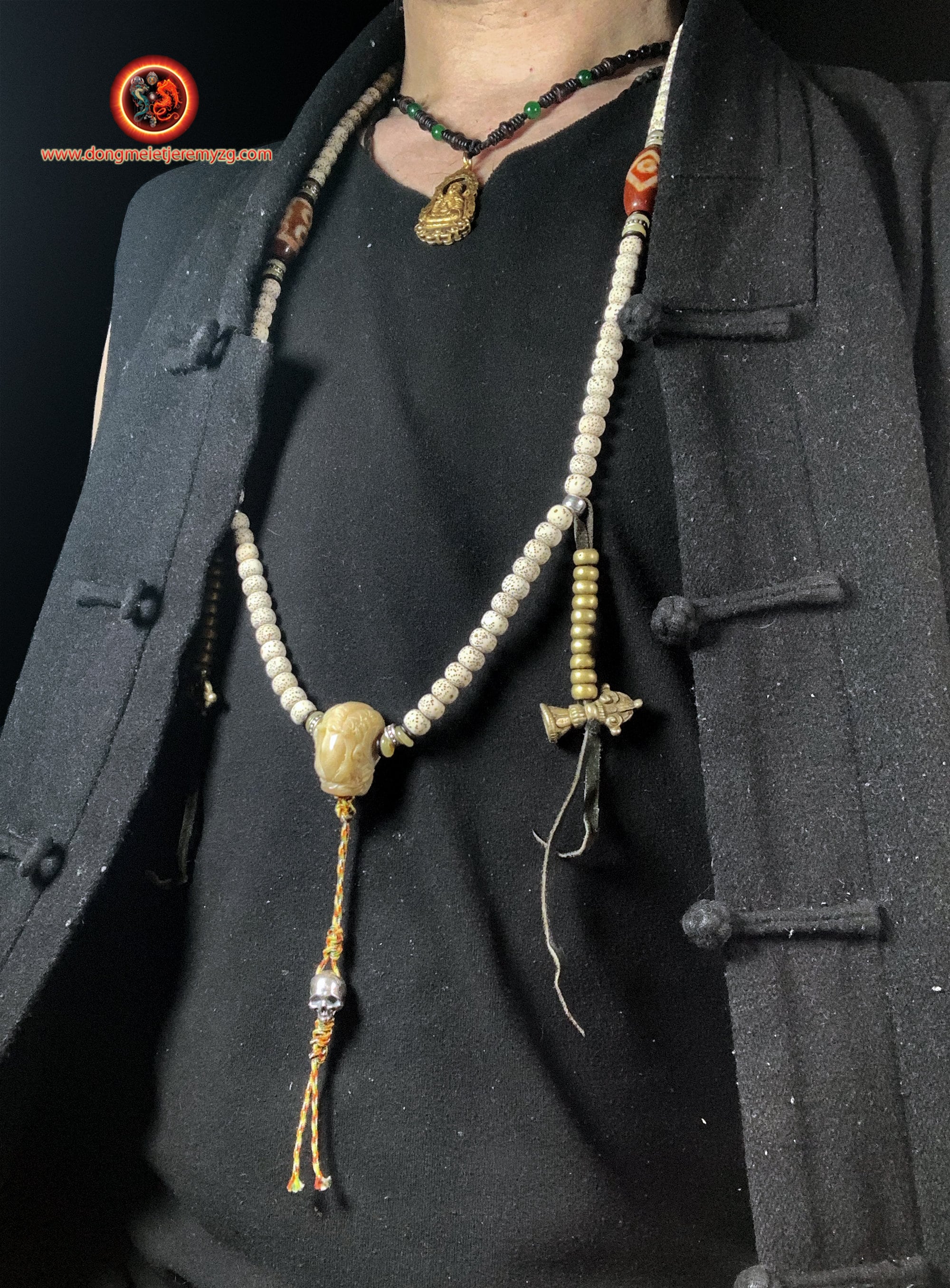 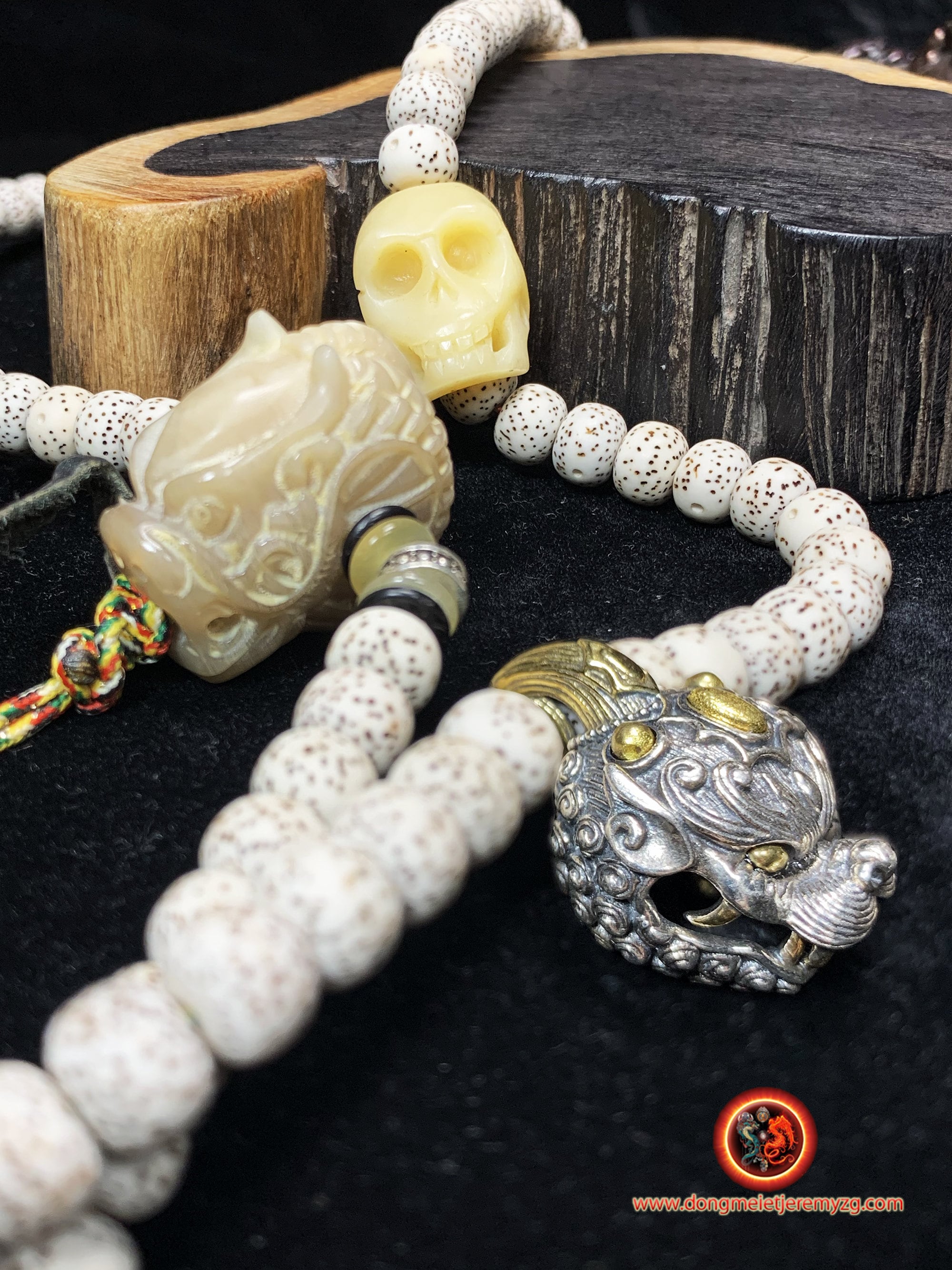 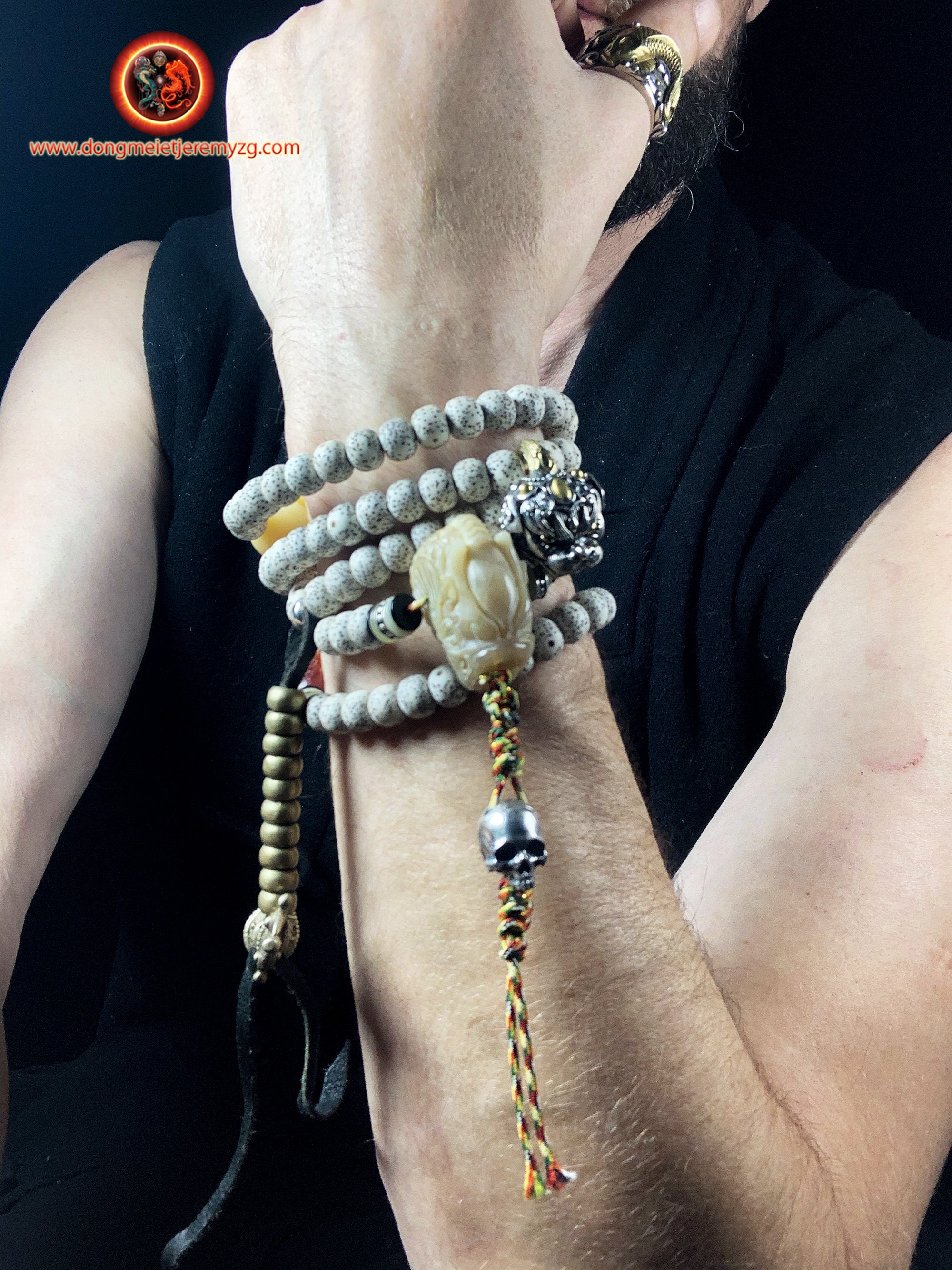 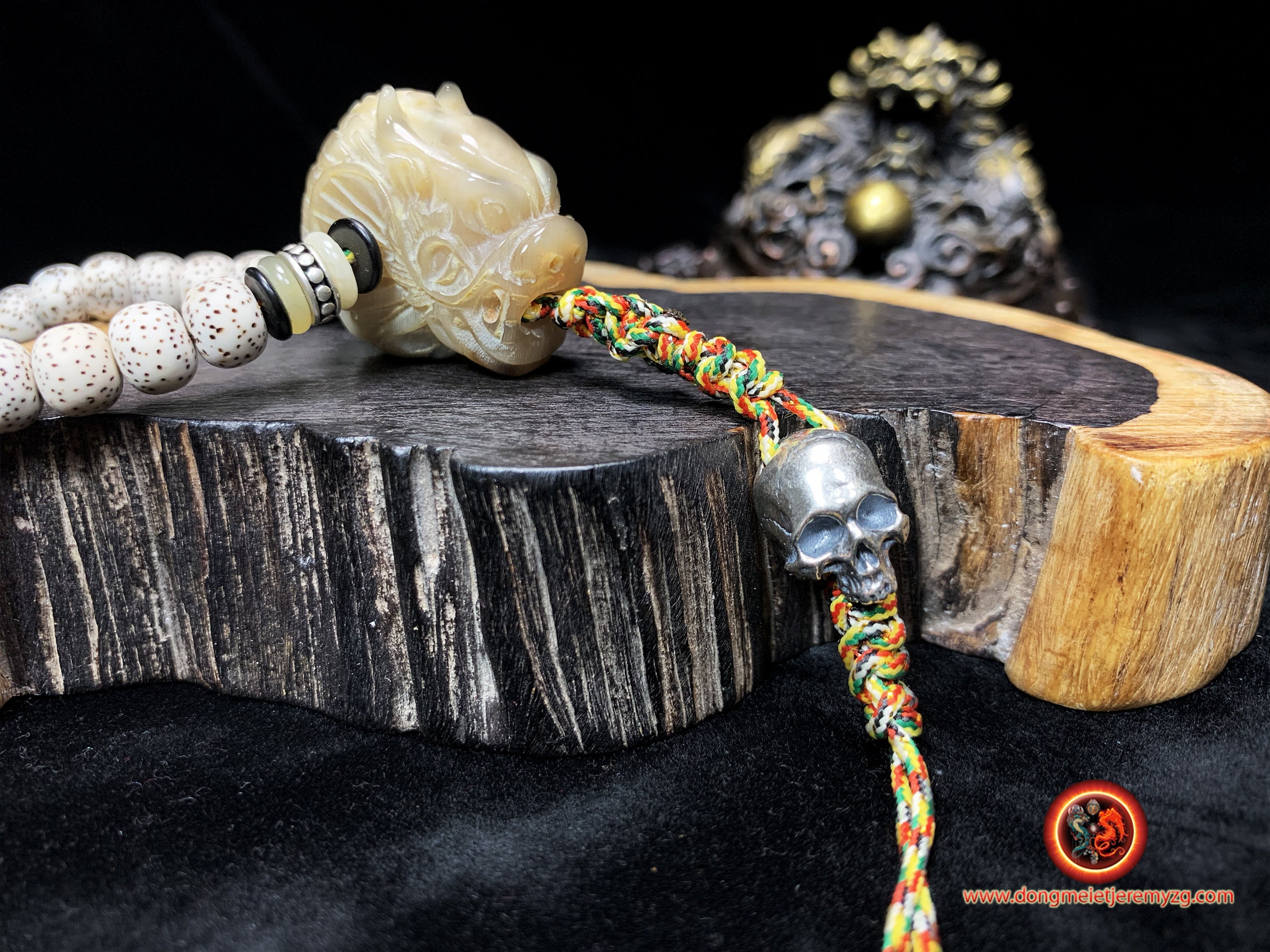 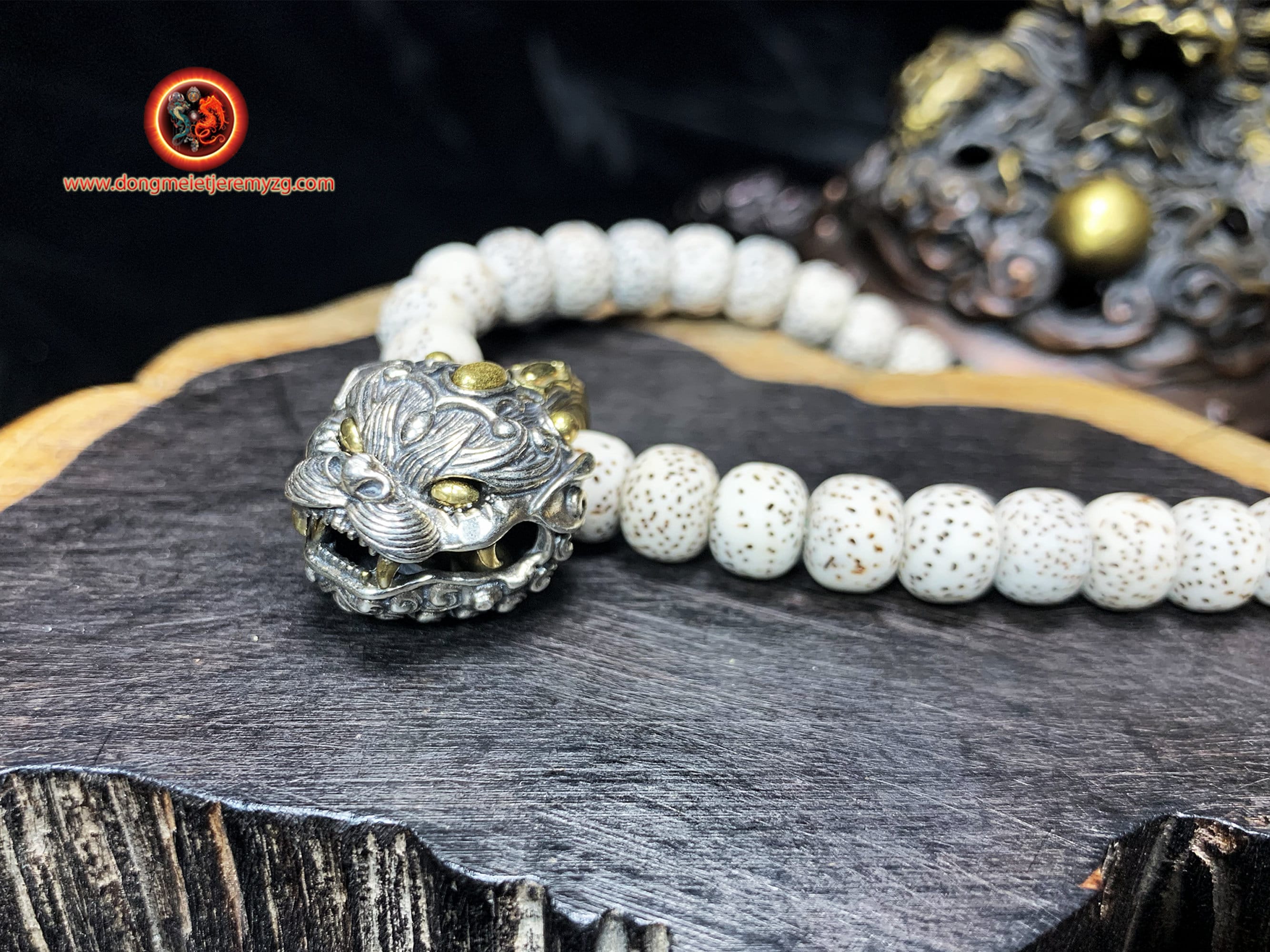 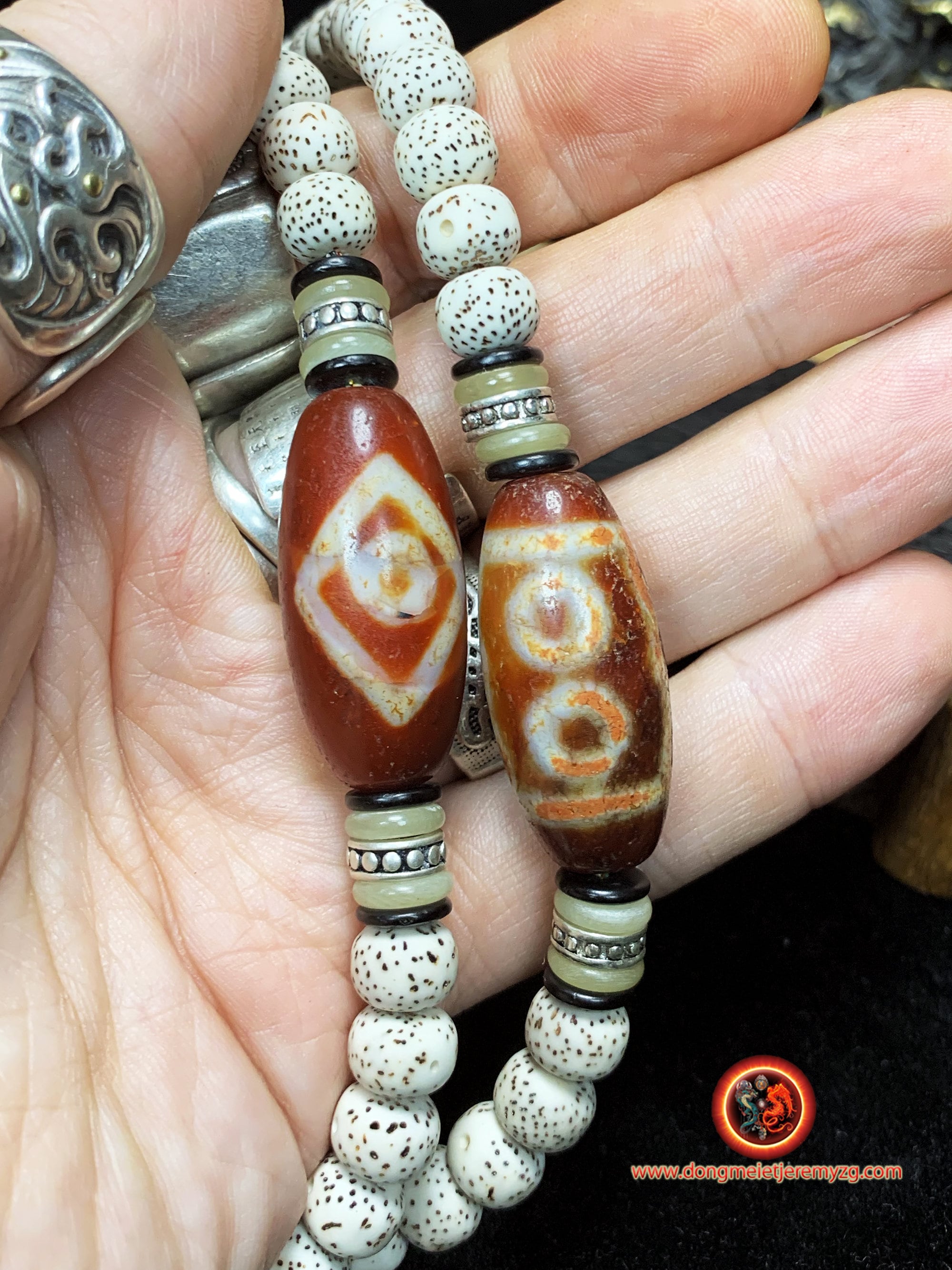 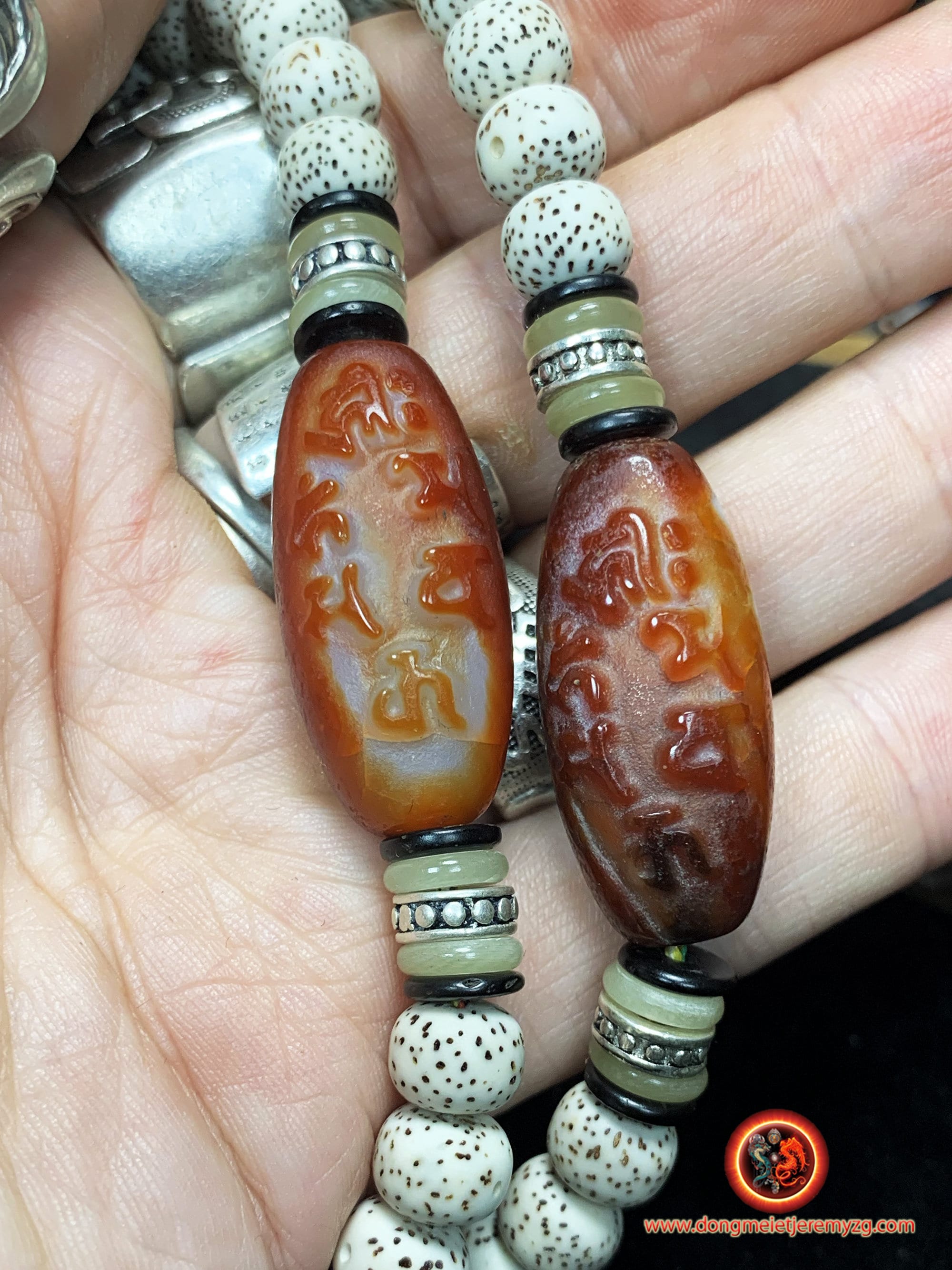 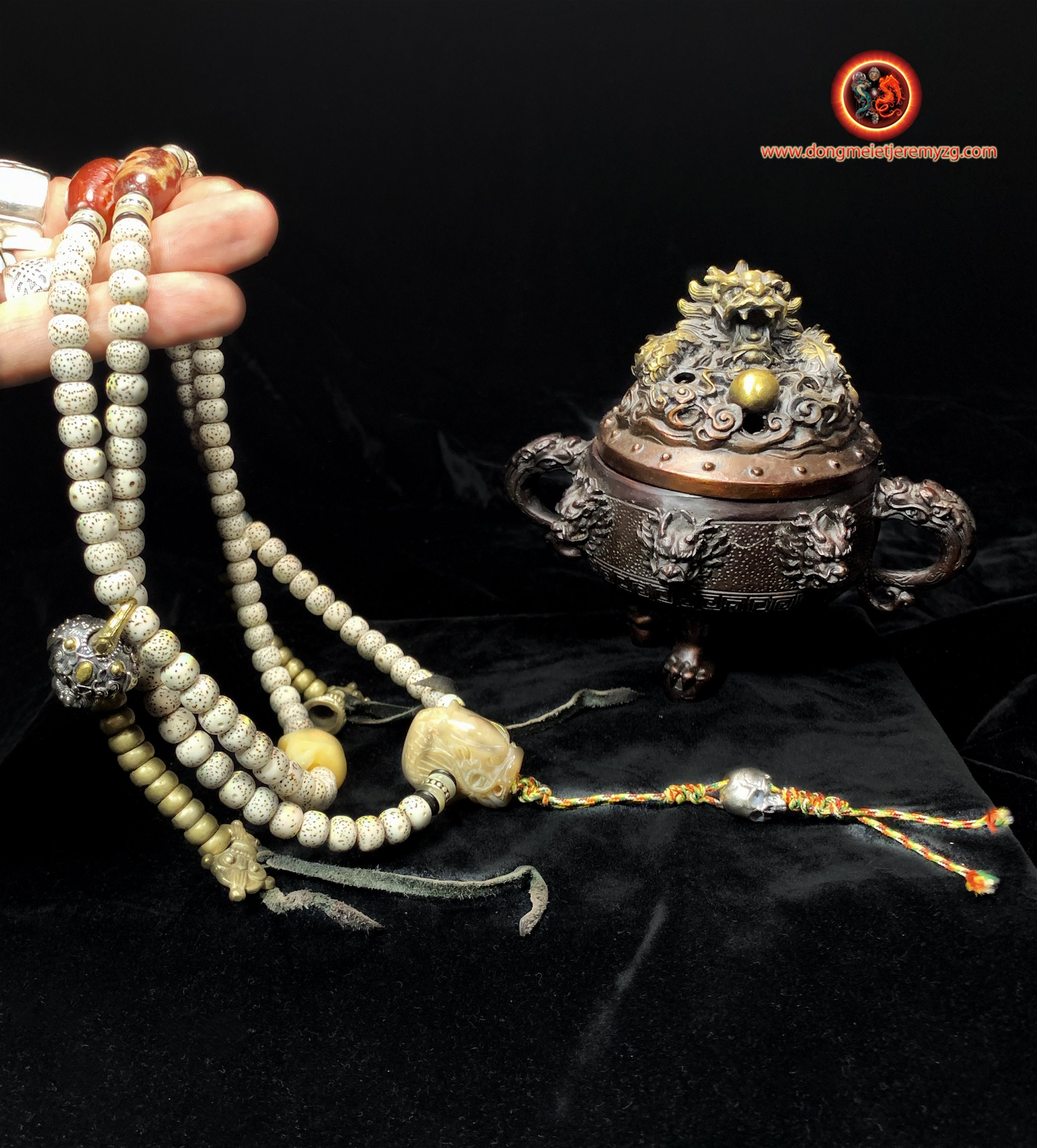 The mala, trengwa, in Tibetan is the buddhist's rosary, the object from which the monk (or even the lay practitioner) almost never separates, holding it in his hand or wrapped around the wrist.
The mala is first of all a utilitarian onjet: it serves as a tactile support for the recitation of mantras, at the same time as it is used to count them if one has set to repeat a defined number.
The mala is composed of 108 strung pearls, which justifies its name, since it simply means "garland" (of pearls). The different components each contain a symbolic meaning specify: The big pearl (or Buddha's head, or Guru's pearl) that closes the loop repeats the knowledge of emptiness. The small cone that surmounts it is the mark of emptiness itself.

As a gemologist graduated from the National Institute of Gemmology of Paris, all our stones are appraised and certified.
As a Malakara, we make all our malas ourselves while scrupulously respecting tradition.

Skulls and dragons,
We have set up on this piece two skulls, one in buffalo bone for the central pearl and one in 925 silver in finish. Two dragons, one for the finishing pearl or "Guru pearl" also made of buffalo bone, and a ghost hunting bell in the shape of Pixiu "the 5th son of the dragon". according to tradition, the ringing of this bell will keep away evil spirits and evil fate.
Symbolically the skull symbolizes the knowledge of which the dragons would be the fierce protectors.

108 beads of pipal seeds, 8mm in diameter for each pearl.
Buddha having attained enlightenment under a sacred fig tree, pipal seeds are the most traditional material for making malas. These seeds patinate and take on a beautiful shine over time called "porcelain layer". Our seeds come from hainan island known for growing and drying the finest quality in the world. Be careful many specialized site and stores name these seeds as Lotus seeds by mistake.

Tibetan sacred agates "DZI".
One has "one eye" the other has "two eyes". Protective mantras are engraved on the back of these authentic carnelian DZIS.

The Dzi of one eye represents a beacon of light and hope. This powerful eye enhances human wisdom and produces the happiness of life. The obstacles encountered by the owner will be noted by this unique eye.

The 2-eyed pearl represents the harmonious concept of Yin and Yang, the vital balance. So this pearl strengthens stability and balance.

Tibetans cherish these pearls and consider them hereditary jewels. The meaning of the Tibetan word "Dzi" translates to "brilliance, clarity, splendor". In Mandarin Chinese, dzi are called "pearl of the sky". Tibetans recognize, without being envious or jealous, the qualities of brilliant people, those people who shine intellectually and attract the attention and admiration of all. For Tibetans, wearing a Dzi pearl can develop in everyone that natural brilliance called Talent.

For a pearl to be recognized as a true dzi, it must be made of agate or chalcedony. Beads of glass, bone, plastic, wood or any other material are just imitations

the drawings on its surface are made by the hand of man, but according to a secret technique. A mixture of plant and lead is applied to their surface, the whole thing is cooked (at about 1200 degrees); at the exit and once the mixture is removed the drawings appear. According to some sources, some of the oldest Dzi were colored FROM THE INSIDE using secret techniques lost for a long time...

5° The vajra contains its own symbolism as seen above