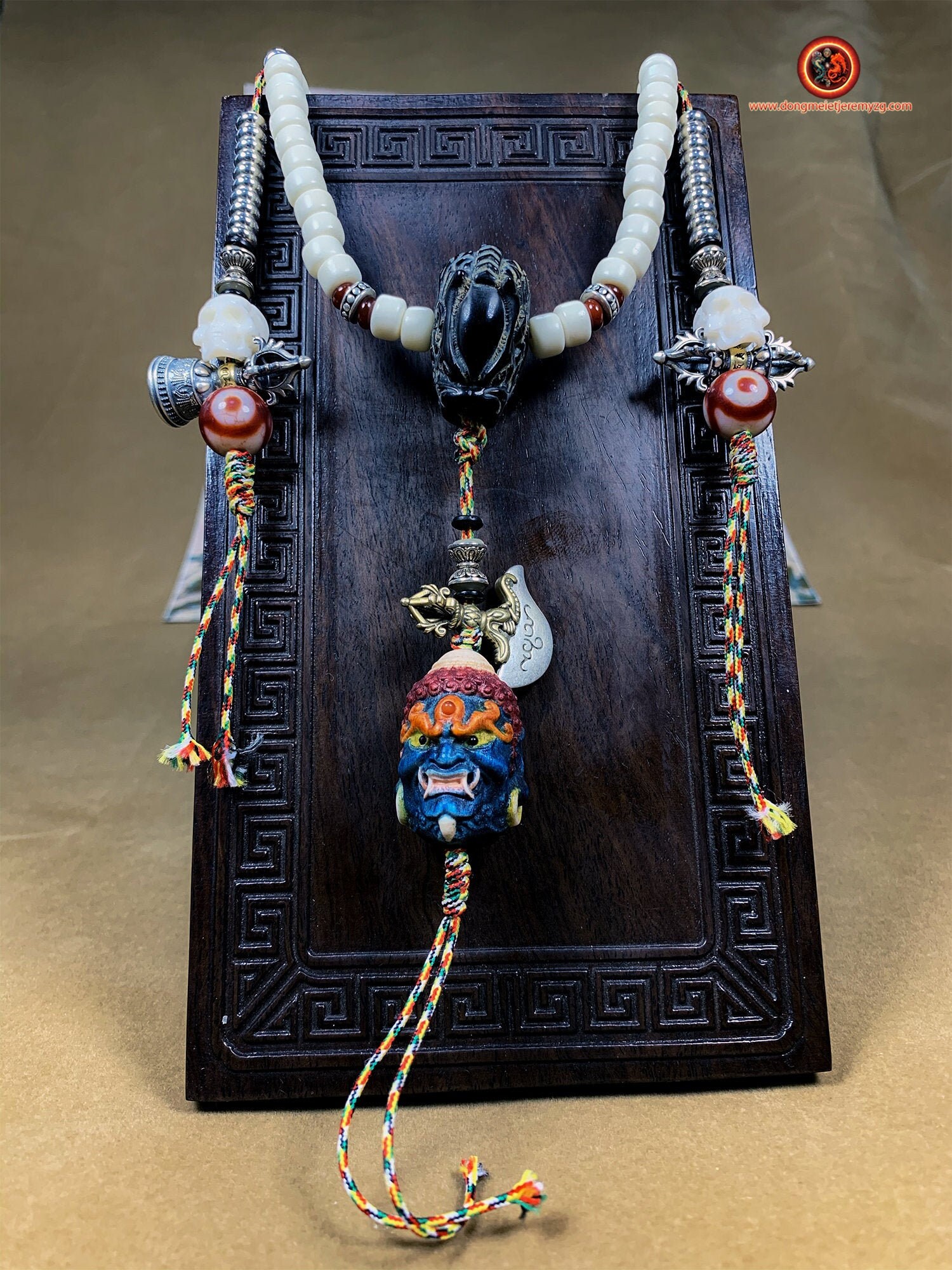 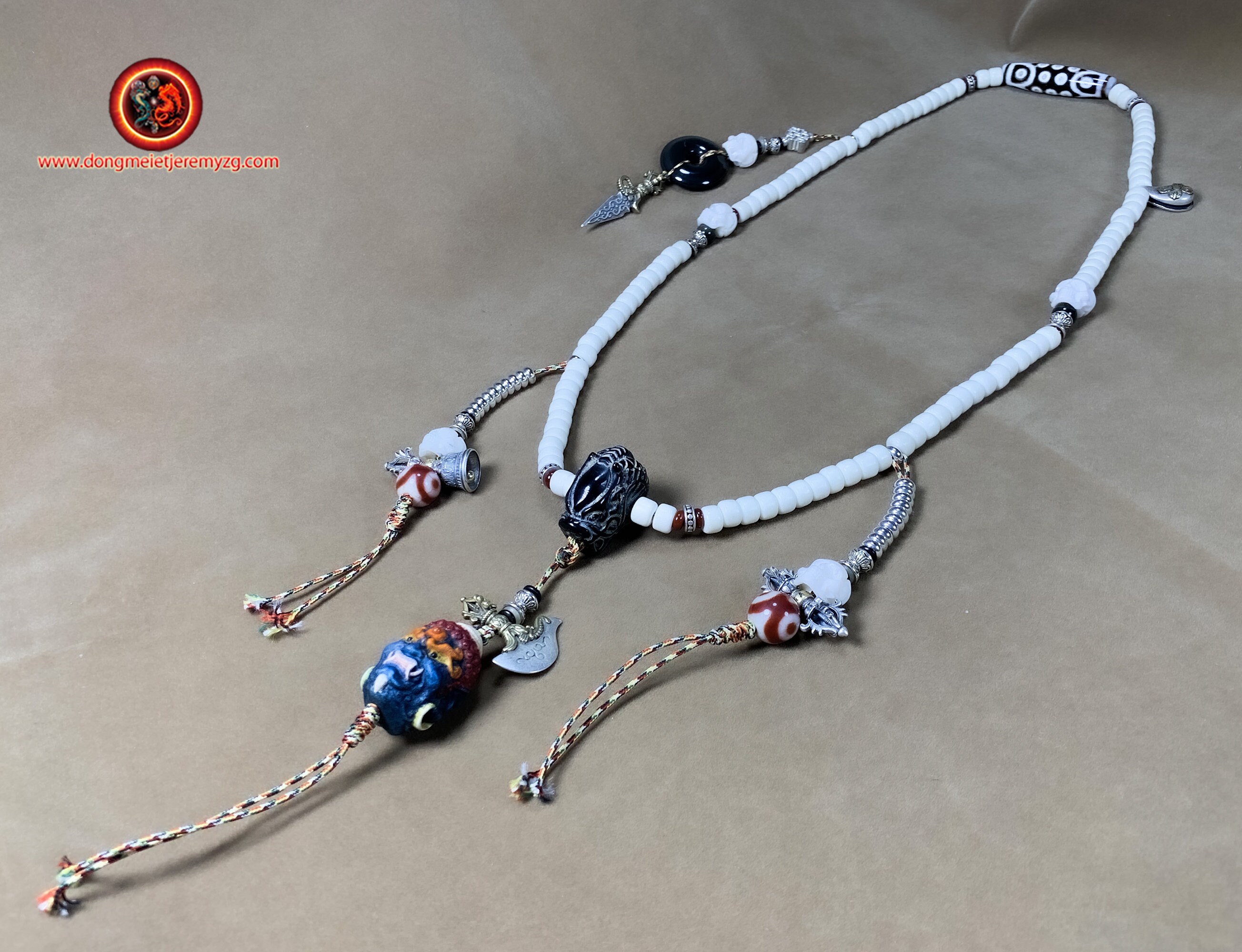 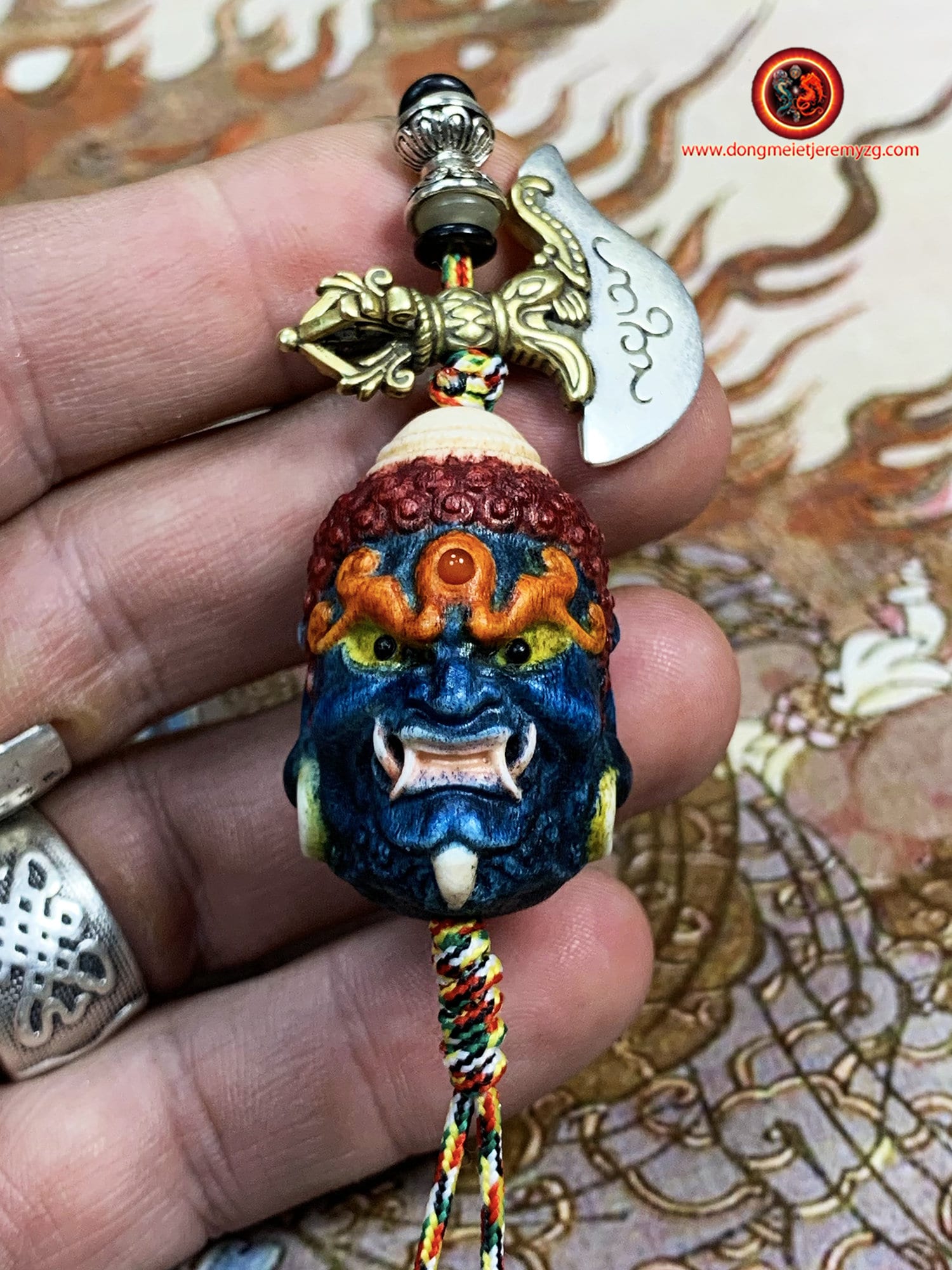 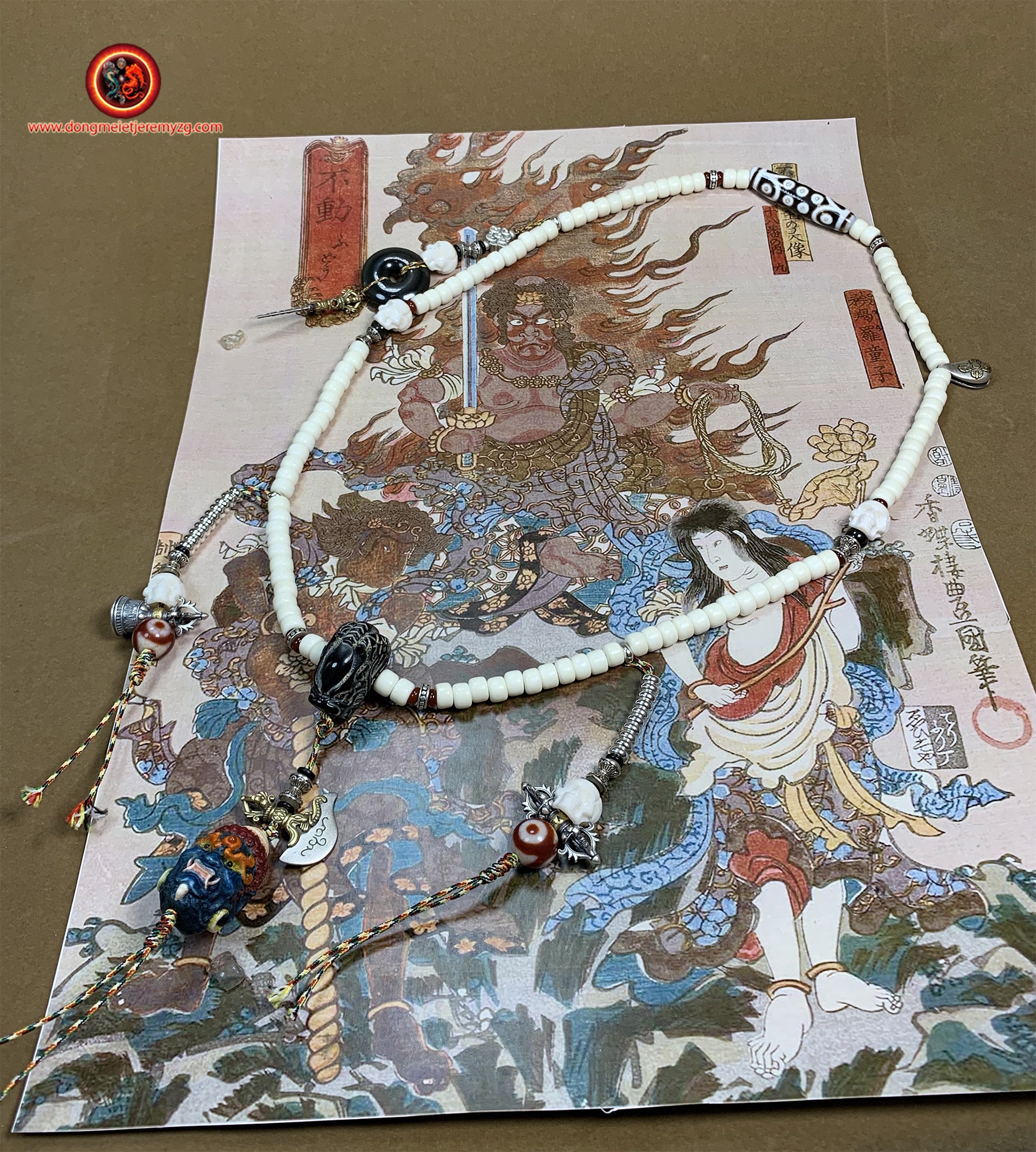 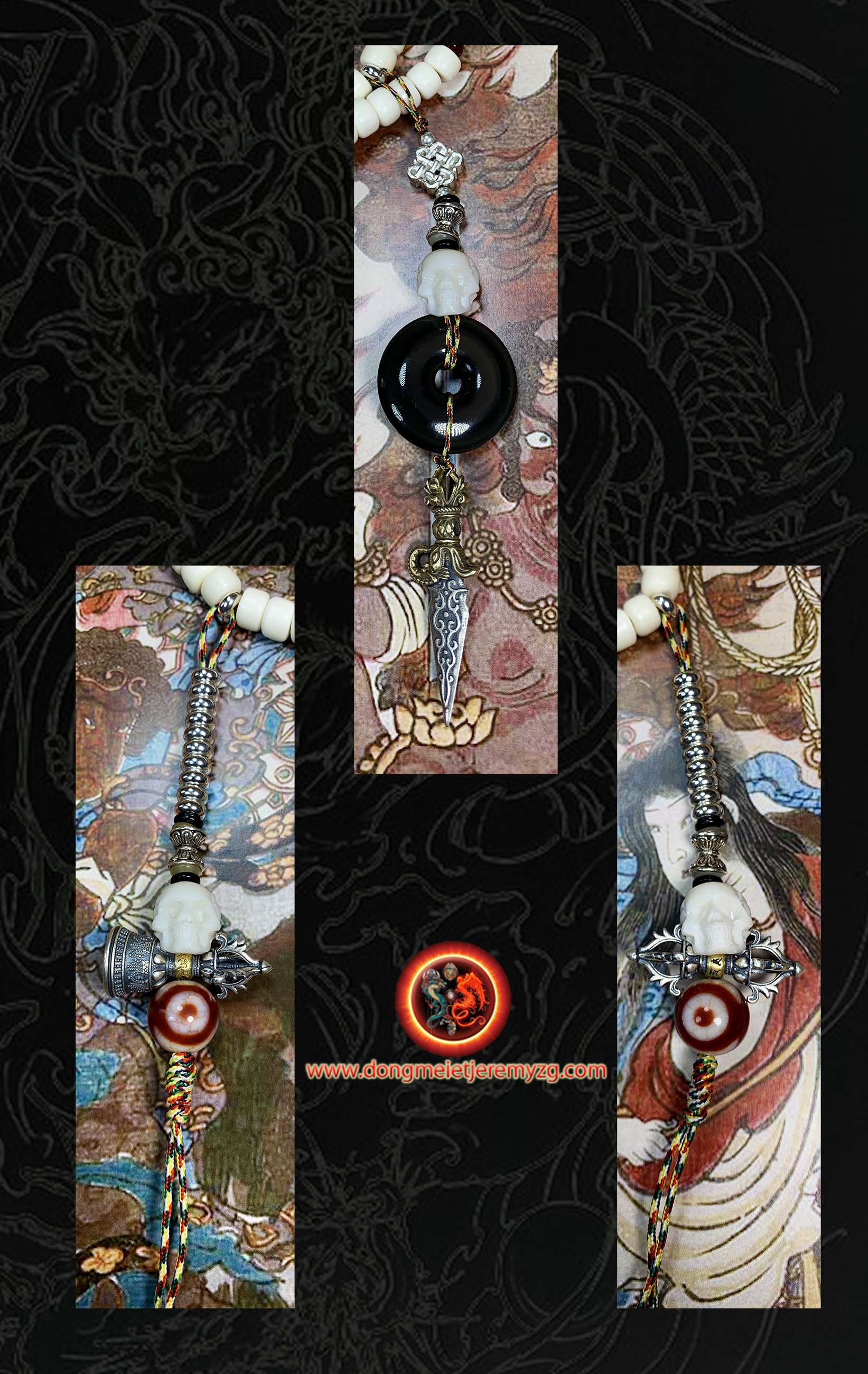 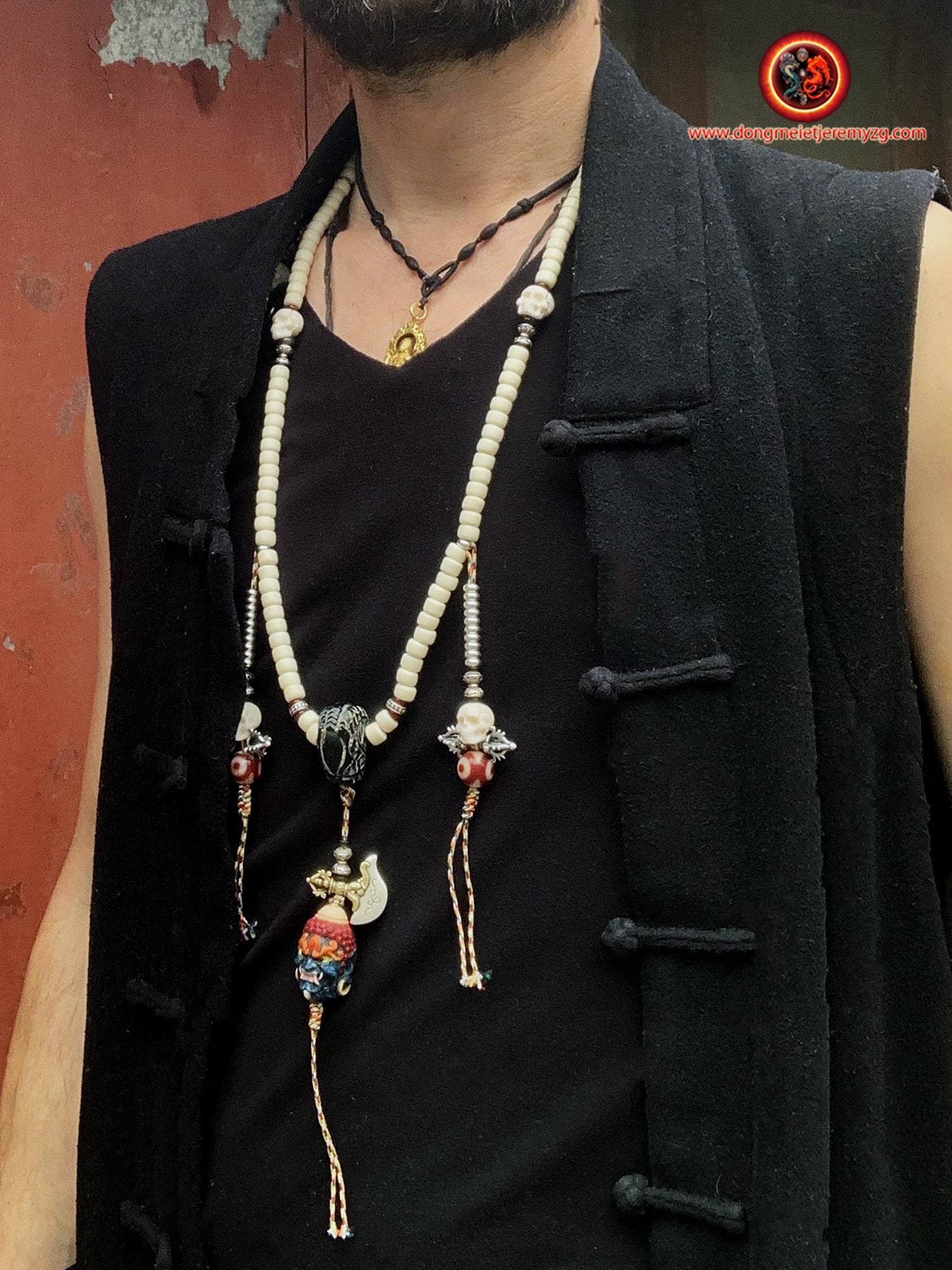 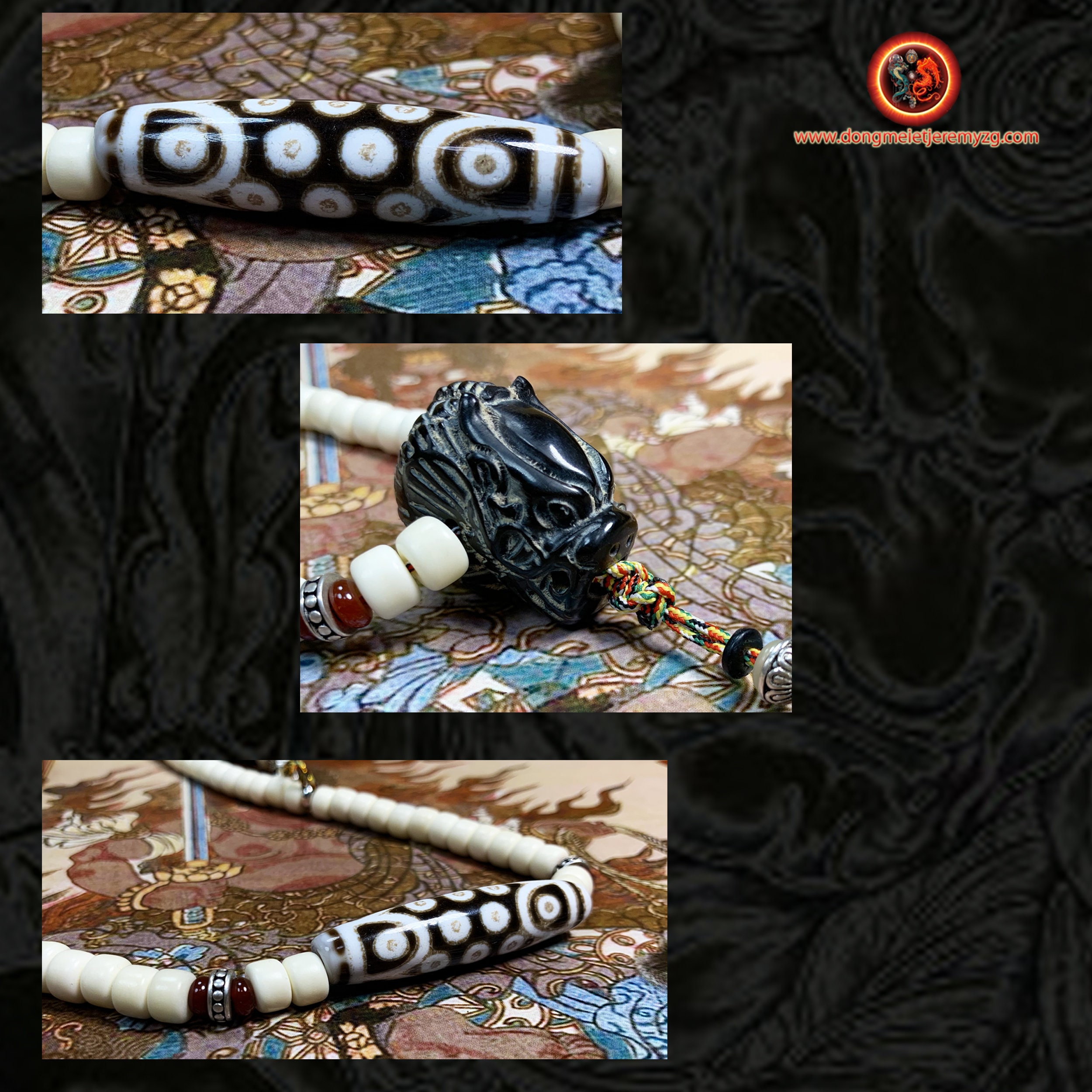 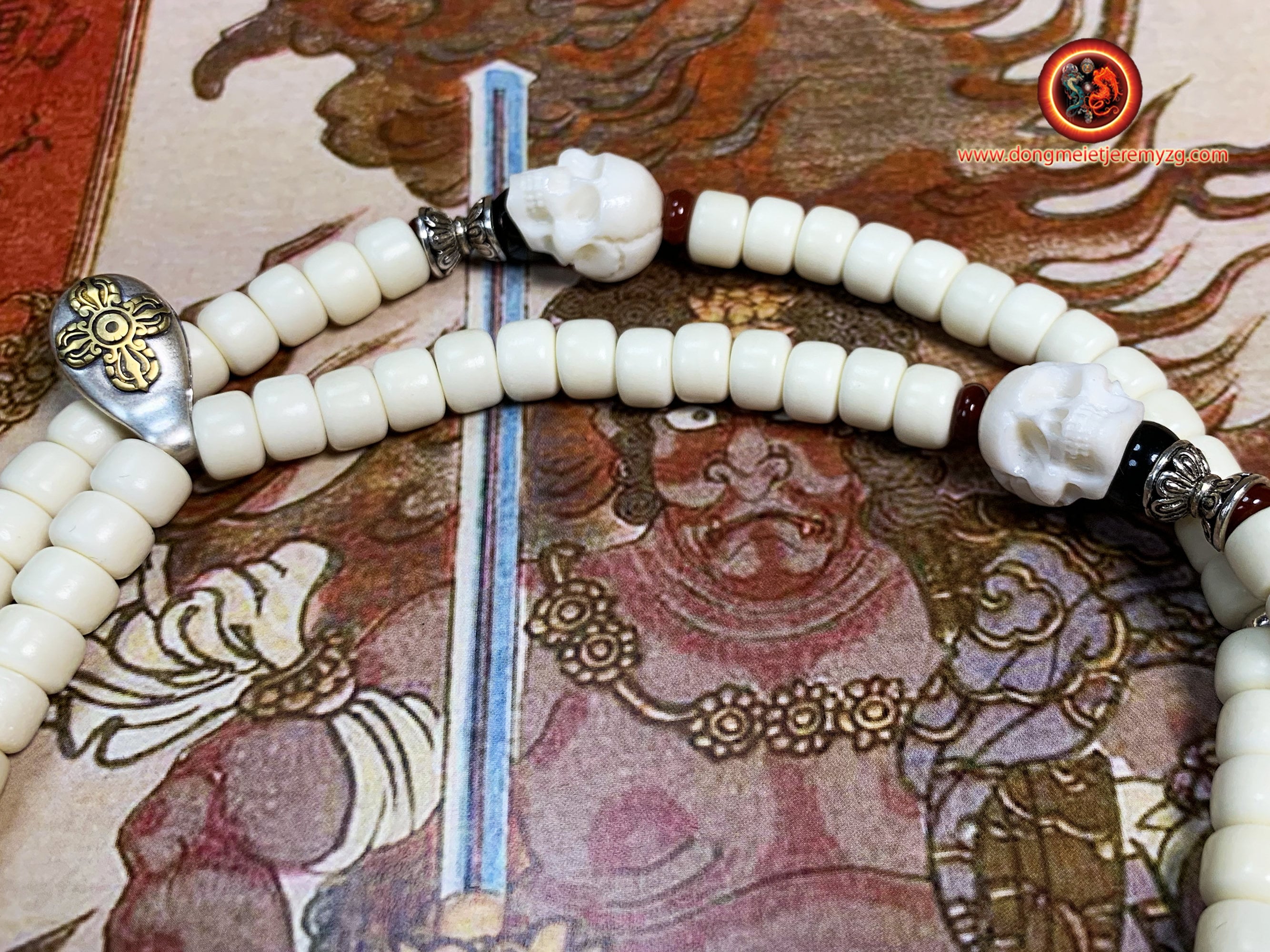 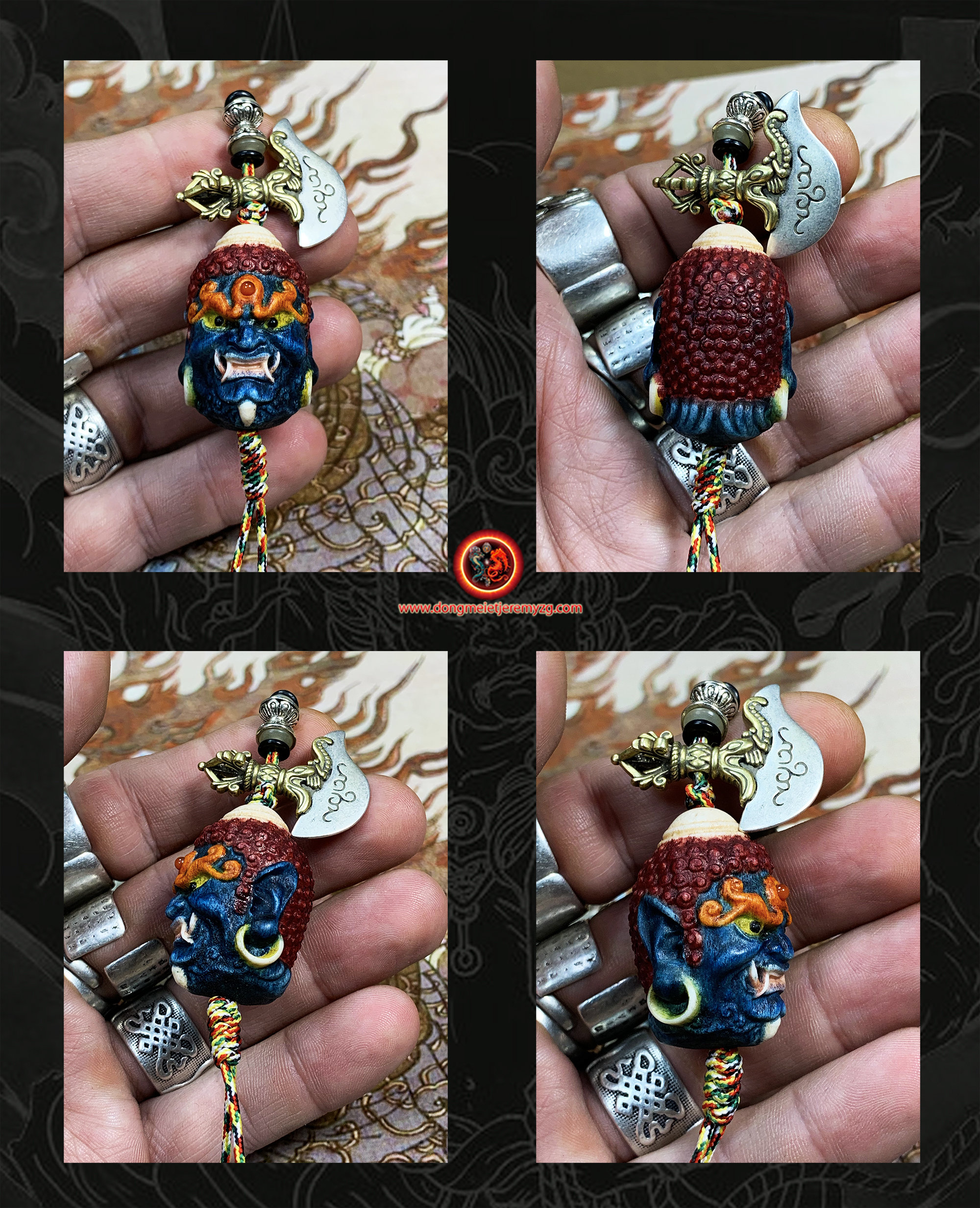 Representation of the Acala Buddha handcrafted in horn and like tangkas, Tibetan sacred paintings pigments are made from crushed minerals.
Dimensions of the pendant 35mm/ 23mm/ 25mm deep.

DZi sacred Tibetan agate with 21 eyes, called "DZI of Acala"
2 Dzis to one eye below each prayer tower counter.

Buffalo bone skulls, 5 skulls representing the 5 klesas, or 5 passions or 5 poisons that a Buddha annihilated during his awakening (ignorance, desir, anger, pride and jealousy)

representation of the ritual objects of Tantric Buddhism in silver 925 and copper.
The bell, the vajra, the dagger, and the chopper

Representation of the infinity knot also in silver 925

We use a traditional cord, braid composed of 5 threads representing the 5 colors of the 5 meditation Buddhas (Dhyani Buddhas)

cala, the leader of the Vidyaraja , is associated with fire and anger. Mostly represented in Japan,

The traditional Dzi used is a 21-eyeD DZI in Acala
The Dzi is a Tibetan pearl, of distant origin, bringing many mystical benefits and benefits to its wearer. He is a Tibetan talisman or amulet, the king of good luck, sometimes revered as a true deity. The success of the Tibetan pearl comes from its multiple eyes, up to 21.

The Dzi of 21 eyes increases the magic power inherent in the wearer, it performs what you desire most. This dzi magnifies all the characteristics of the other beads and concentrates them into one. This dzi helps the owner to arrive at a state of demigod by the fact that his dreams come true. But the holder of such a pearl must remain pious and pure of heart. The pearl with 21 eyes is highly sought after.

At the bottom of each counter is two DZIS to one eye
The Dzi with one eye represents a beacon of light and hope. This powerful eye enhances human wisdom and produces the happiness of life. The obstacles encountered by the owner will be identified by this unique eye.

Also on these same counters are the bell and vajra in silver 925 and copper.


The Endless Knot or Infinite Knot (located at the top of the skull above the obsidian donuts) is a Buddhist symbol that represents the movement of what is eternal, the spiritual paths that intertwine and time. The shape of the Endless Knot is evocative of wisdom and compassion in Tibetan Buddhism. The top and bottom of the symbol symbolize the interaction of the opposing and duelles forces, which eventually come together and unite in the universe. The infinite Tibetan knot also represents the inseparability of the Void and the reality of existence. Finally, since the Node has neither beginning nor end, it is also defined as the Wisdom of Buddha

The adamantine dagger (bottom of the Obisidian donuts) or Vajrakilaya represents a very wrathful form of Vajrasattva, the bodhisattva of purification.

Finally, the chopper or Kartika, placed above Acala, is a small knife to skin portable ritual in the shape of a crescent used in the tantric ceremonies of Vajrayana Buddhism. It is said that the kartari is "one of the attributes par excellence of wrathful tantric deities". It is commonly referred to as the "dakinis knife." Its shape is similar to the Inuit ulu or woman's knife, which is used for many things, including skin cleansing.

The traditional interpretation of kartaro in Tibetan Buddhist imagery is that of the kartari of compassion. It is the chopper that pulls the beings out of the transmigration cycles. The crochu crescent-shaped knife of the dakini with its vajra handle pulls one forward from suffering, axes the ego-centered self and is guided by the adamantine clarity of the vajra

Kartika is used to symbolize the rupture of all material and worldly bonds and is often crowned with a vajra, which is said to destroy ignorance and thus leads to enlightenment. Another more nuanced interpretation says that "kartika represents the rupture of the two Buddhist obscurations of smears (klesha avarana) and knowledge (jneya avarana) that obstruct the path of enlightenment."

Kartika is also used to cut through human obscurations to progress on the spiritual path, including "pride, lack of belief, lack of devotion, distraction, inattention and boredom."