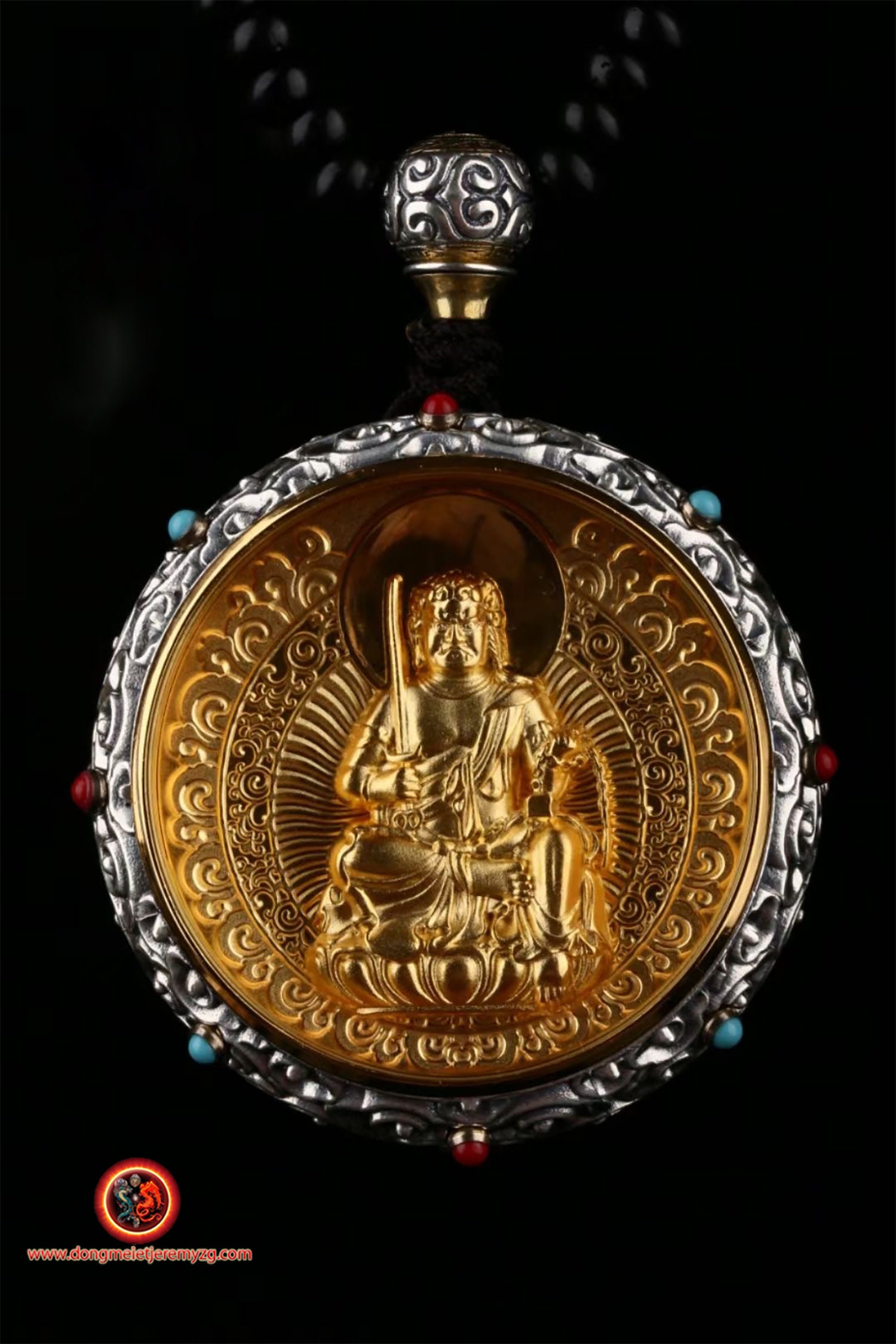 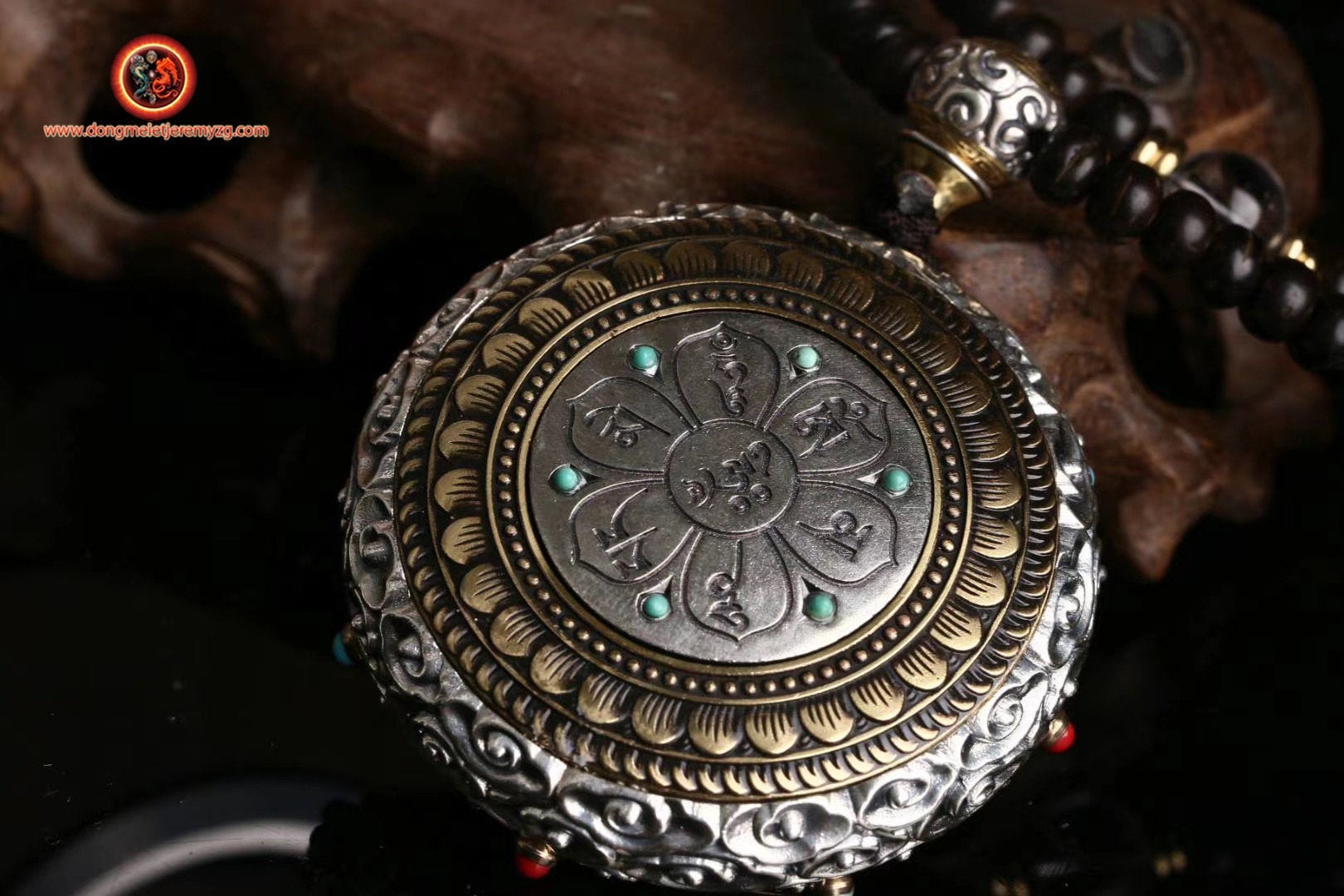 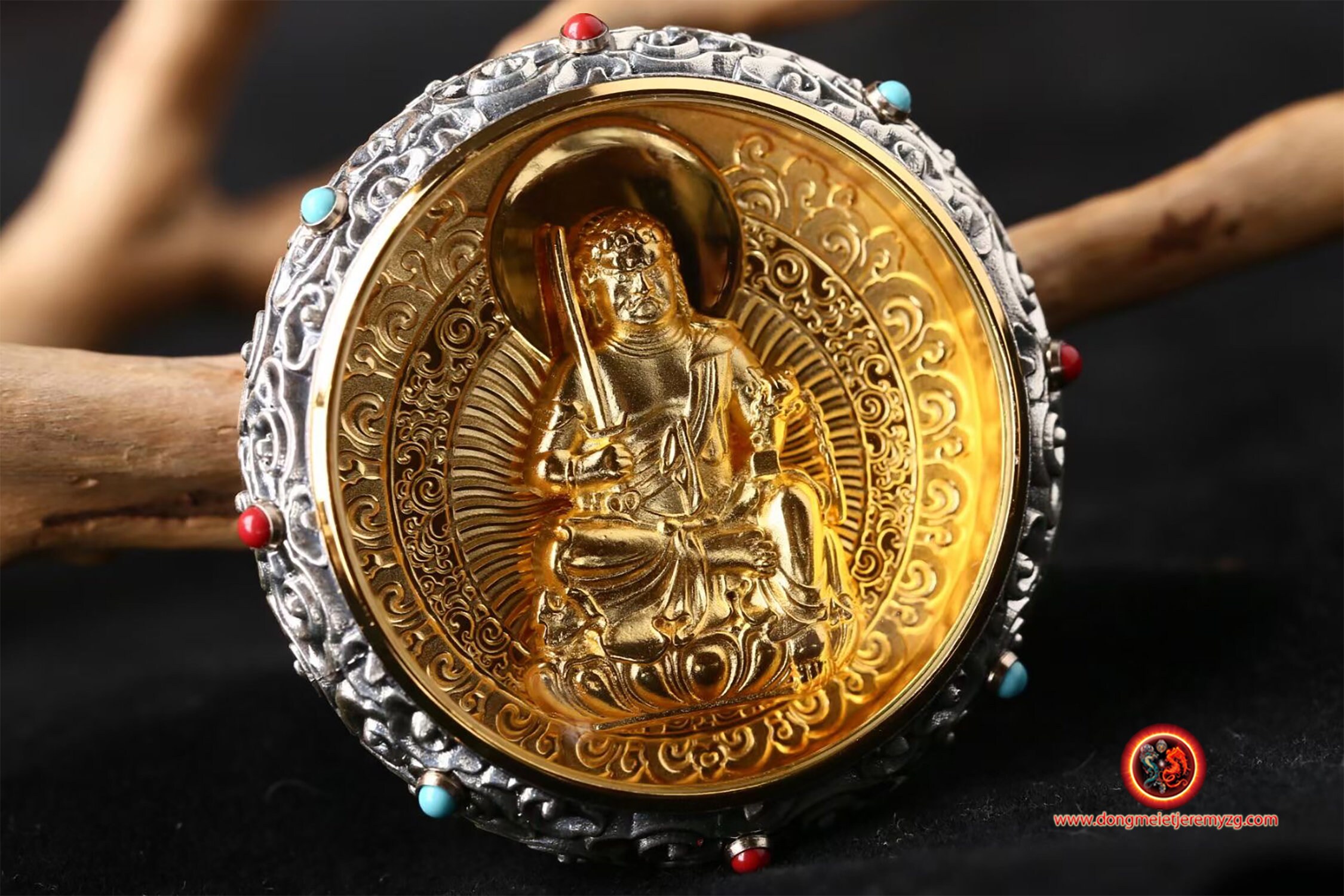 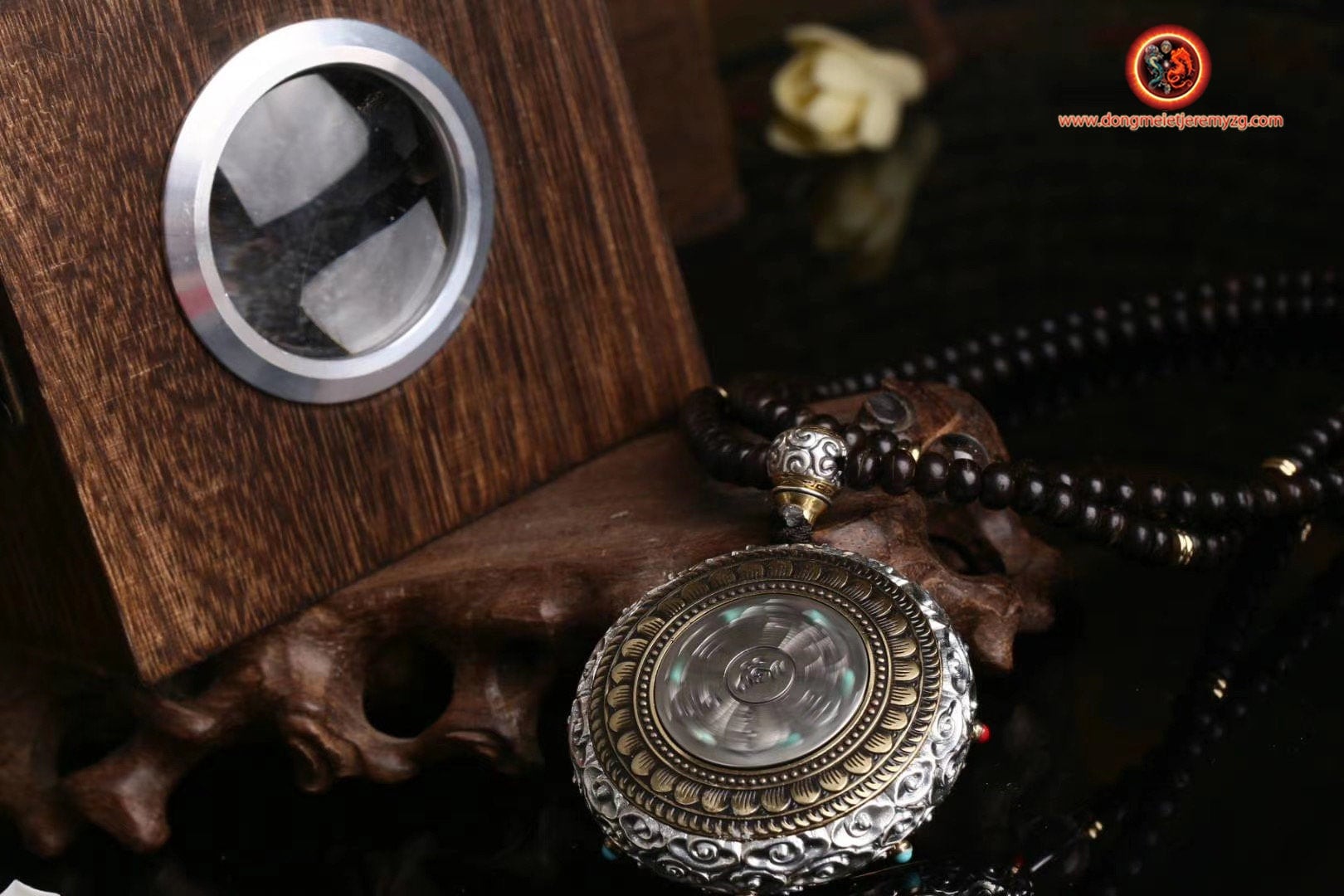 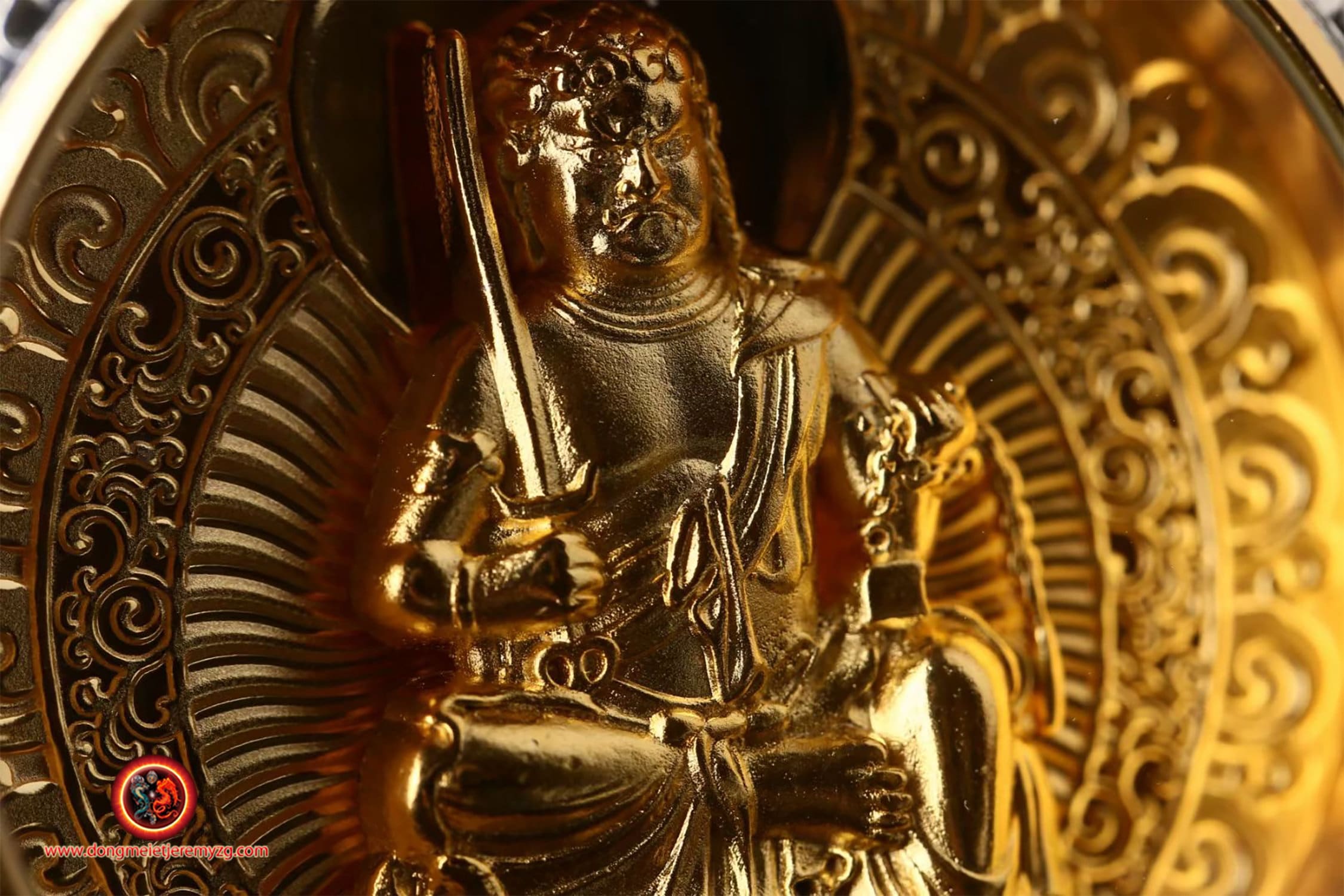 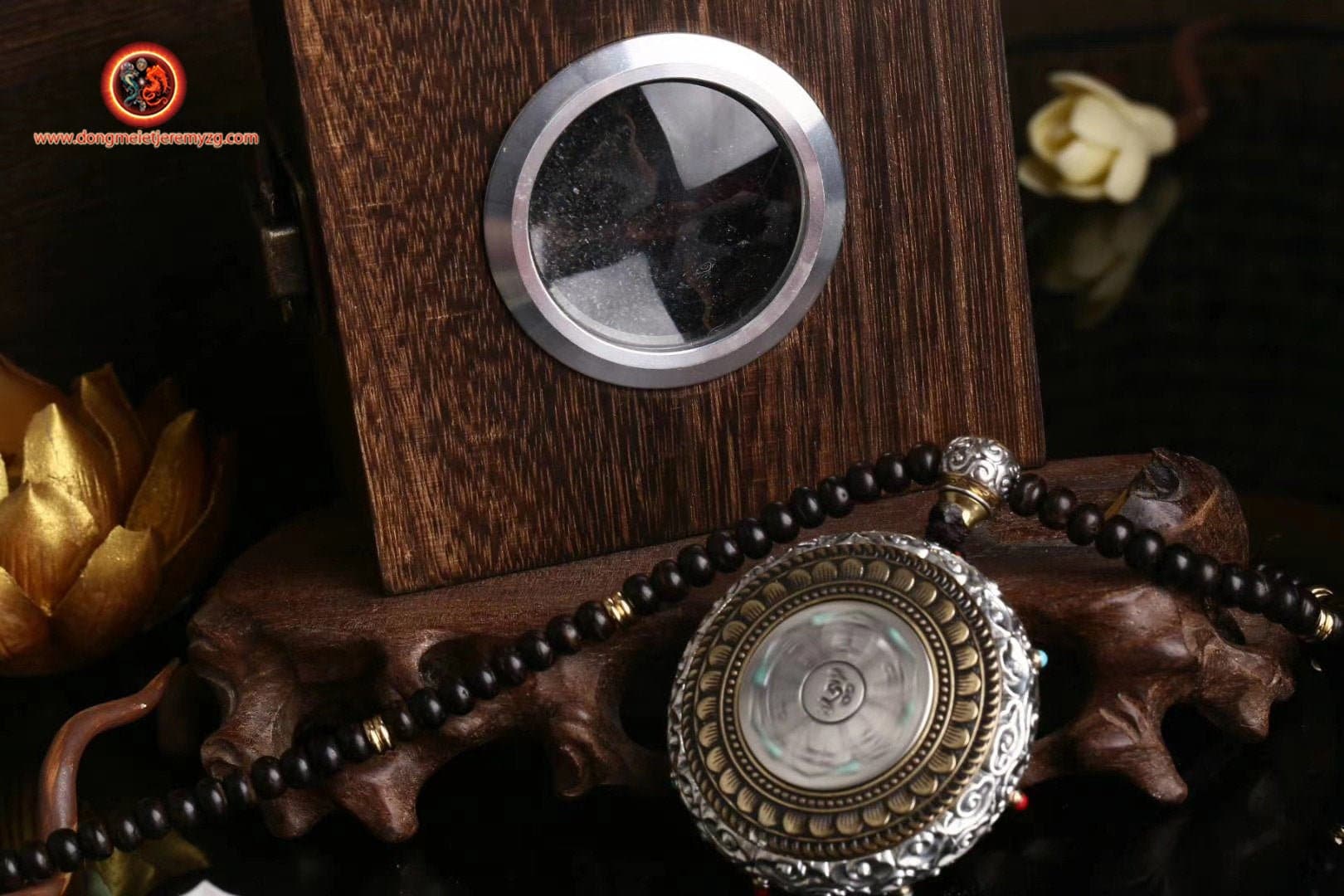 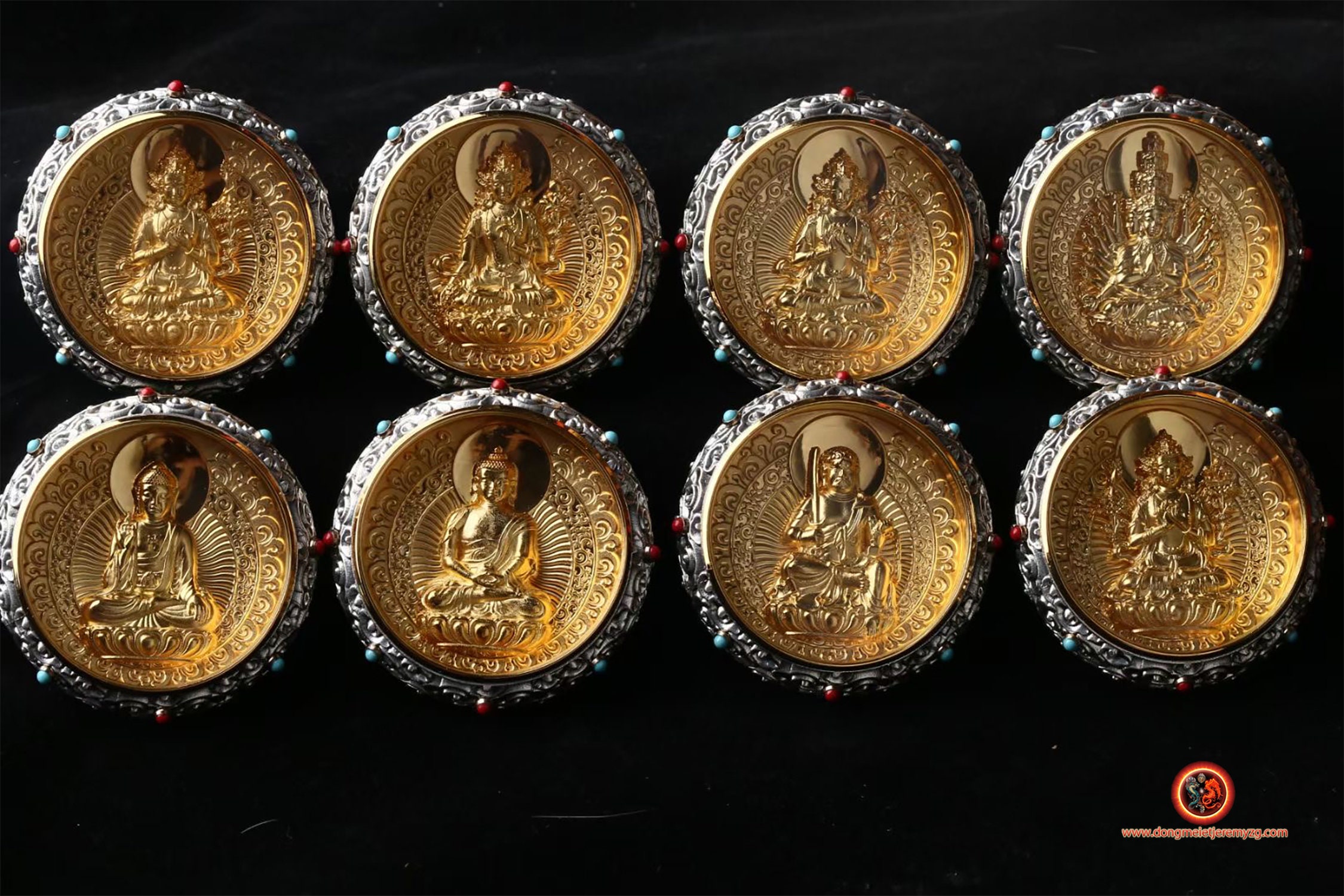 Deity protected by a protective glass made of sapphire leuco like high-end watches.
Arizona Turquoise

Size of pendant: 53mm in diameter
Weight of 72 grams

Comes with a mala composed of 108 pearls of coconut, silver and copper.

Acala, leader of the Vidyaraja, the 5 kings of Buddhist knowledge and magic sciences.


Its symbol is a sword held vertically and around which surrounds a dragon surrounded by flames. His halo of flames supposed to consume passions. It is described in many sutras in particular in the Mahâvairochana- sutra.


He would assume, "against the obstacles, the energy of the follower himself", thus showing the compassionate power of Vairocana. His sword is used to fight the "three poisons": greed, anger and ignorance. With his left hand he holds a rope (pâsha) to catch and bind evil forces and prevent them from harming. Acala has vowed to extend the lives of his faithful by six months and to give them an unwavering resolve to overcome the forces of evil, and as such he is sometimes invoked as the "prolongator of life".

His canines are protruding, the right pointing upwards, symbolizing heaven and spirit, left down, earth and matter.

An aura of fire completely surrounds it (peaceful deities have an aura similar to a resting sea). He sits on a large rock symbolizing his firmness and unwavering determination. It represents immutability.

Acala is said to be a powerful deity who protects the faithful by burning all obstacles (antaraya) (障難, Shonan) and (Klesa smears) (雜染, zenzen), thus helping them to enlightenment.


Originally the deity Mahayana Acalan-tha, whose name means "unmovable protector," Acala was incorporated into the vajrayana as a servant of the Buddha. In the Tangmi (Chinese Vajrayana of the Tang era), its name was translated as Budong "immobile" (chin: 動; Bedang).

Then, the deity was imported to Japan as 動 (Fudo) by Kukai (July 31, 774 - April 22, 835) scholar and official at the Japanese imperial court (early in the Heian era), holy founder of the esoteric Buddhist school Shingon, during his trip to China in 804, with the aim of initiating the tantric form of Buddhism. There he met the eminent Buddhist scholar Pranja from the Gandhara region, the birthplace of Mahayana or a large vehicle, a region in northwestern Pakistan. Kukai studied in China as a member of the kentoshi mission.

Scholars such as Miyeko Murase claim that the origins of this Buddhist deity lie in the Hindu deity Shiva, to which he borrows many traits, especially his attributes of destruction and reincarnation.


The deity was popular during the Middle Ages and in modern times in Nepal, Tibet and Japan where sculptural and pictorial representations of him are most often found. Much of the iconography comes from Japan.

In Tibetan Buddhism and art, the Akshobya Buddha, whose name also means "the immutable," presides over the clan of deities to which Ocaana belongs. Other sources refer to Acala and Caararoa as an "emanation" of Akshobhya, suggesting further assimilation.


Acala evolves into a deity invoked in Buddhist rituals to "frighten the gods, titans, men and destroy the force of demons," and he kills all ghosts and evil spirits.

In some Buddhist texts such as the Sadhanamil, the Hindu gods vishnu , Shiva , Brahma and Kandarpa, are called "evil" because they cause an endless rebirth , and these gods are terrified by Acala because he wears a rope to tie them.

In the Shingon Buddhist temples dedicated to Ocaana, priests perform the Fud-h 動 法 , or ritual service to obtain the purification power of the deity for the benefit of the faithful. This rite systematically involves the use of the Homa ritual (護 摩, goma) as a purification tool. Ritual in which all religious offerings are turned into fire.

In the mystical Shugendo, an esoteric Japanese Buddhist current, lay people or monks in yamabushi garb undergoing rigorous outdoor training in the mountains often pray for small Acala statues or portable talismans that serve as honzon.


It is also at the top of the list of 13 Buddhas (仏 , jesan butsu). Thus, the followers of the Shingon in times of mourning assign Acala to the first seven days of mortuary service.

The first week is an important observation, but perhaps not as much as the observation of "seven times seven days" (or 49 days) meaning the end of the "intermediate state" (bardo).


In Japan, Acala has become a hotbed of worship in its own right, and has been installed as尊 a honzon or main deity in temples and outdoor shrines. A famous example is the Narita Fud-d, a Shingon sub-sect temple in Narita San.


The mantra recited in honor of Fudo Mya is in Sanskrit