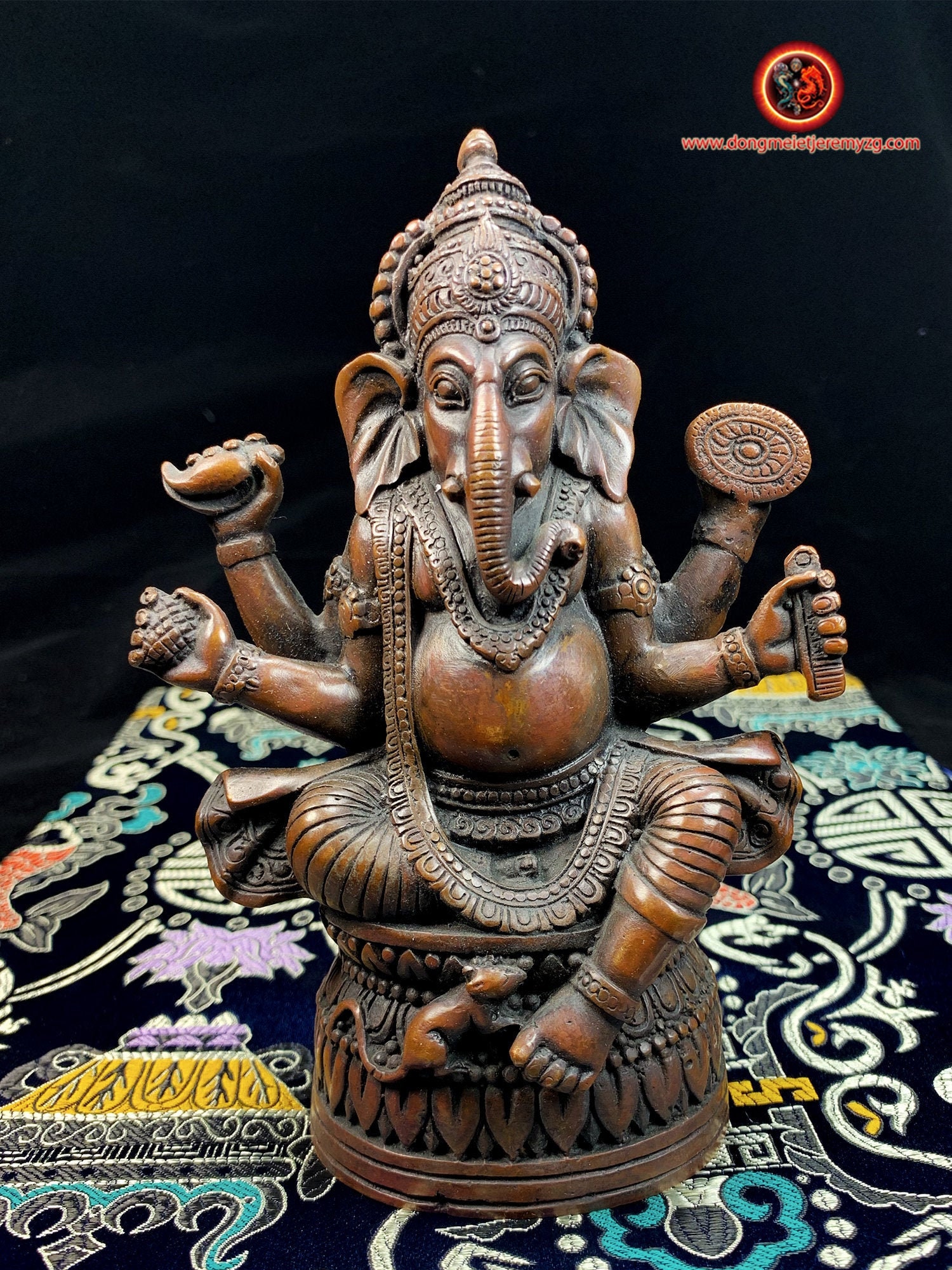 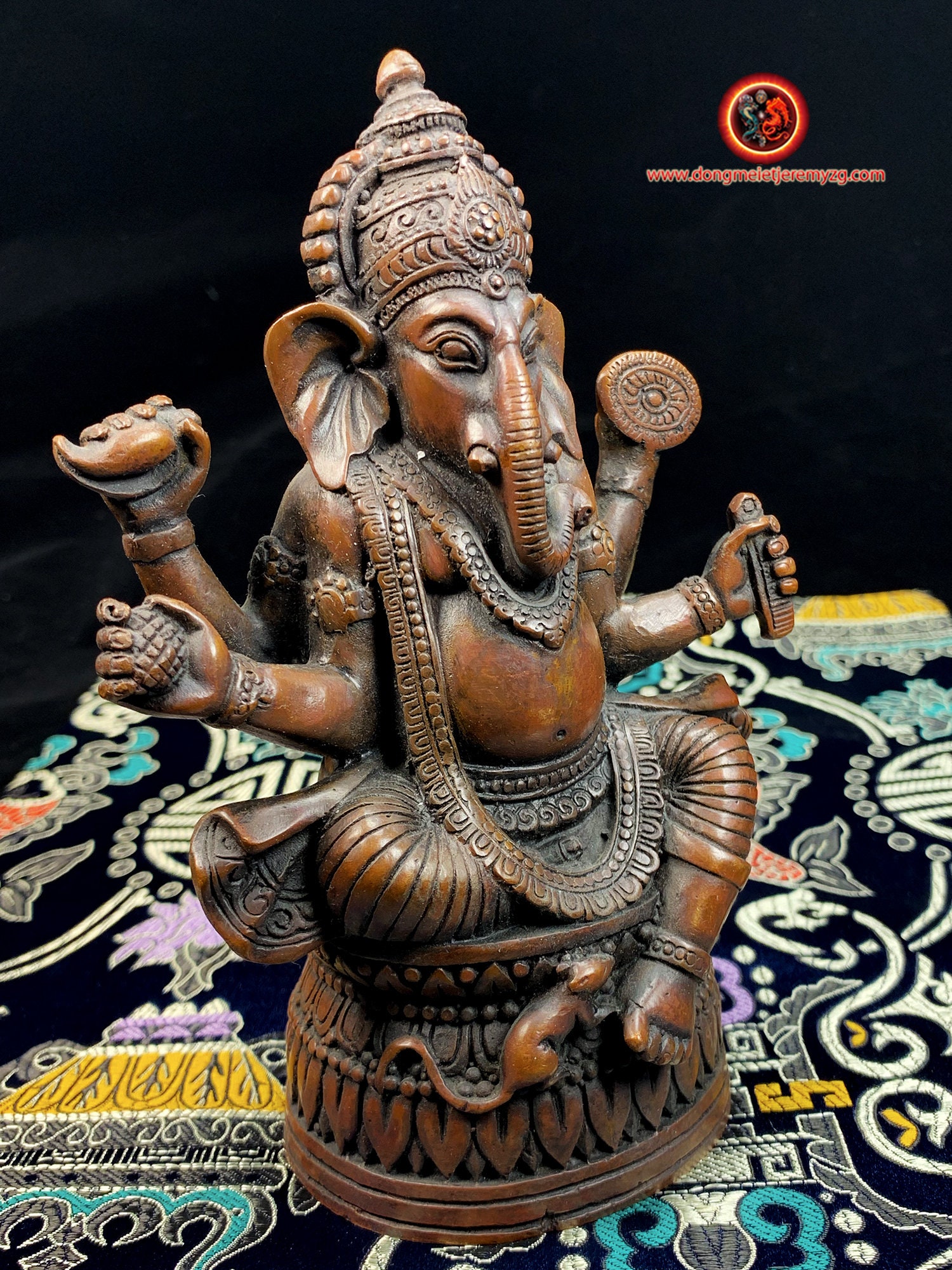 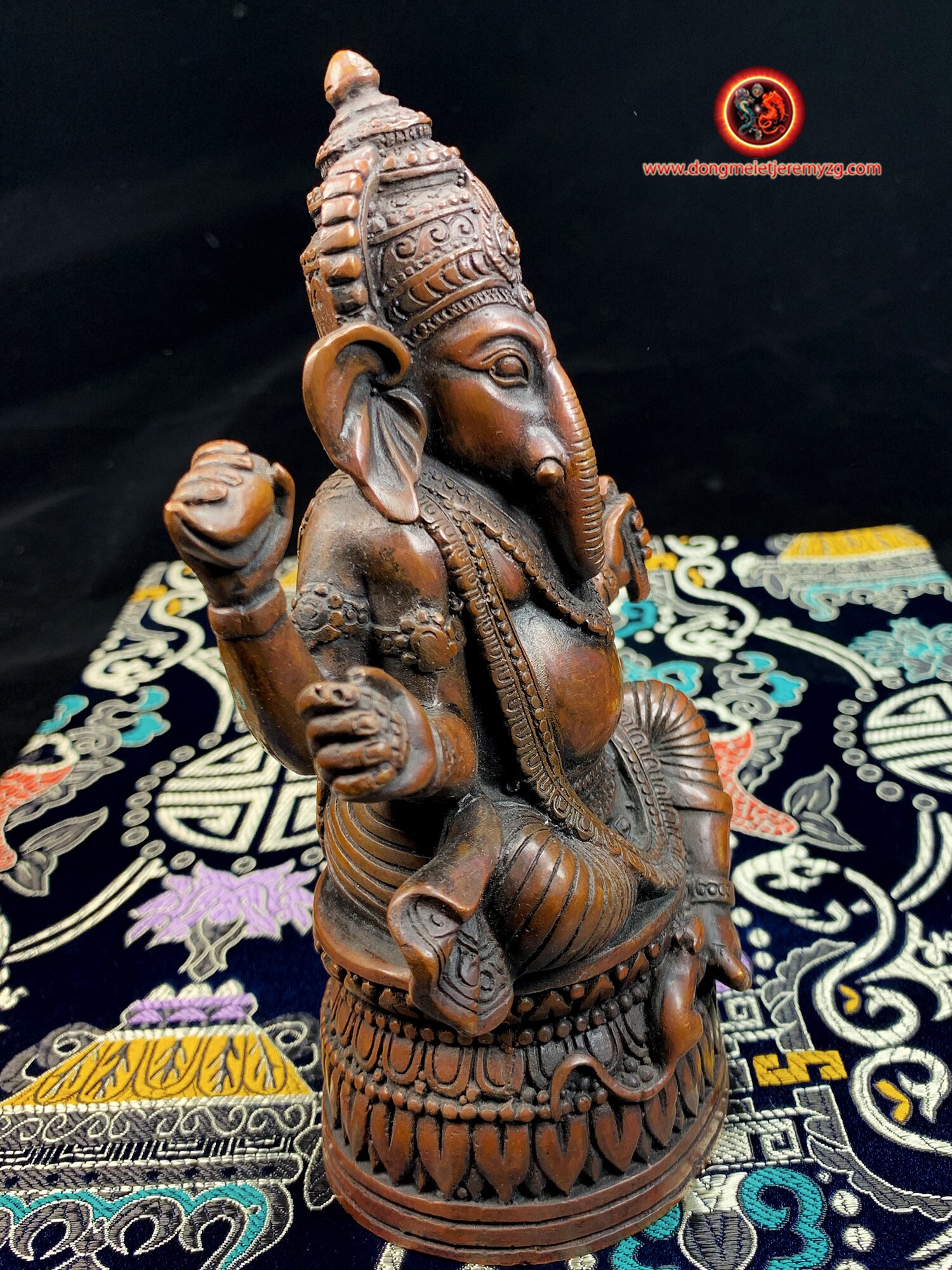 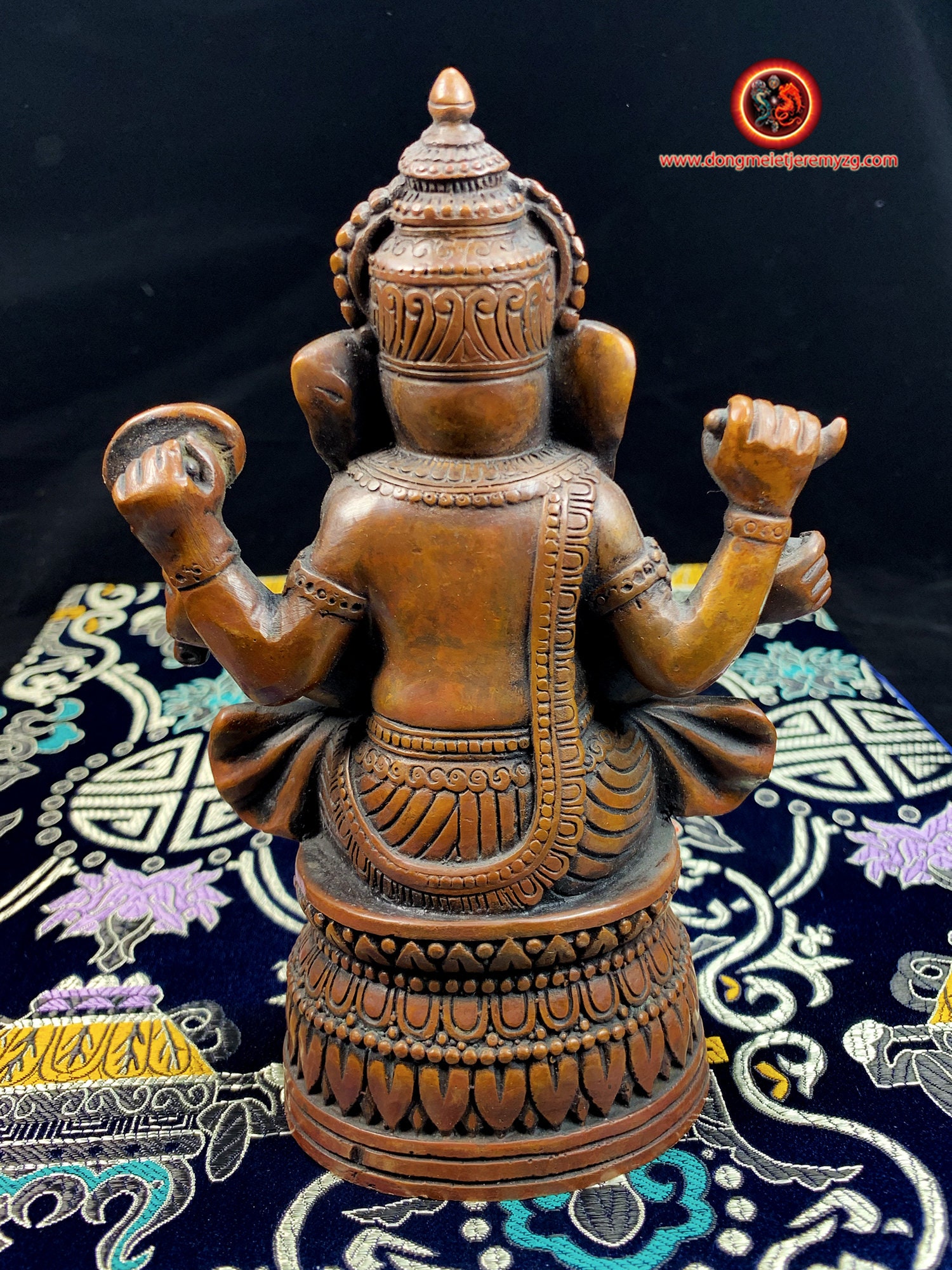 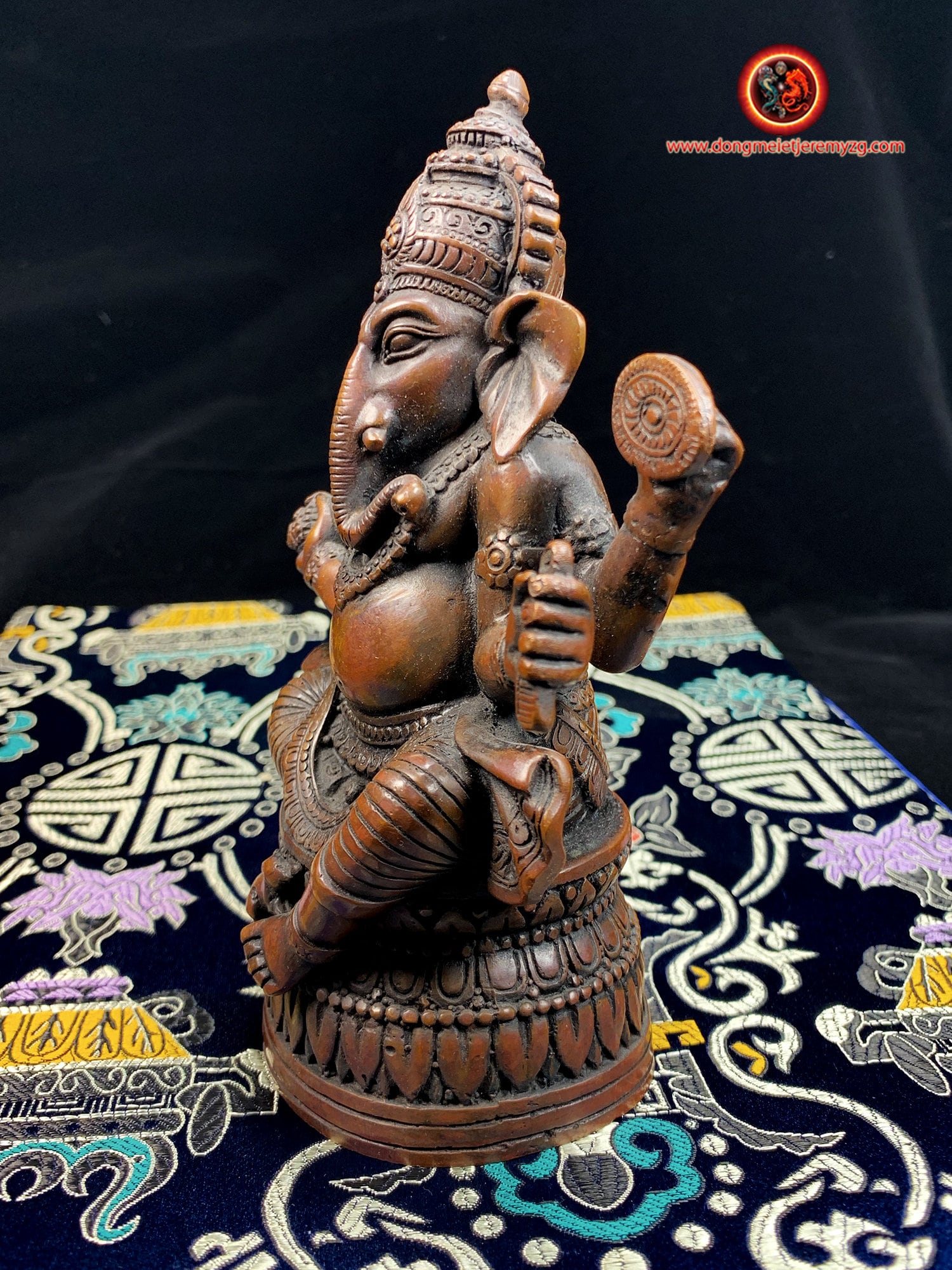 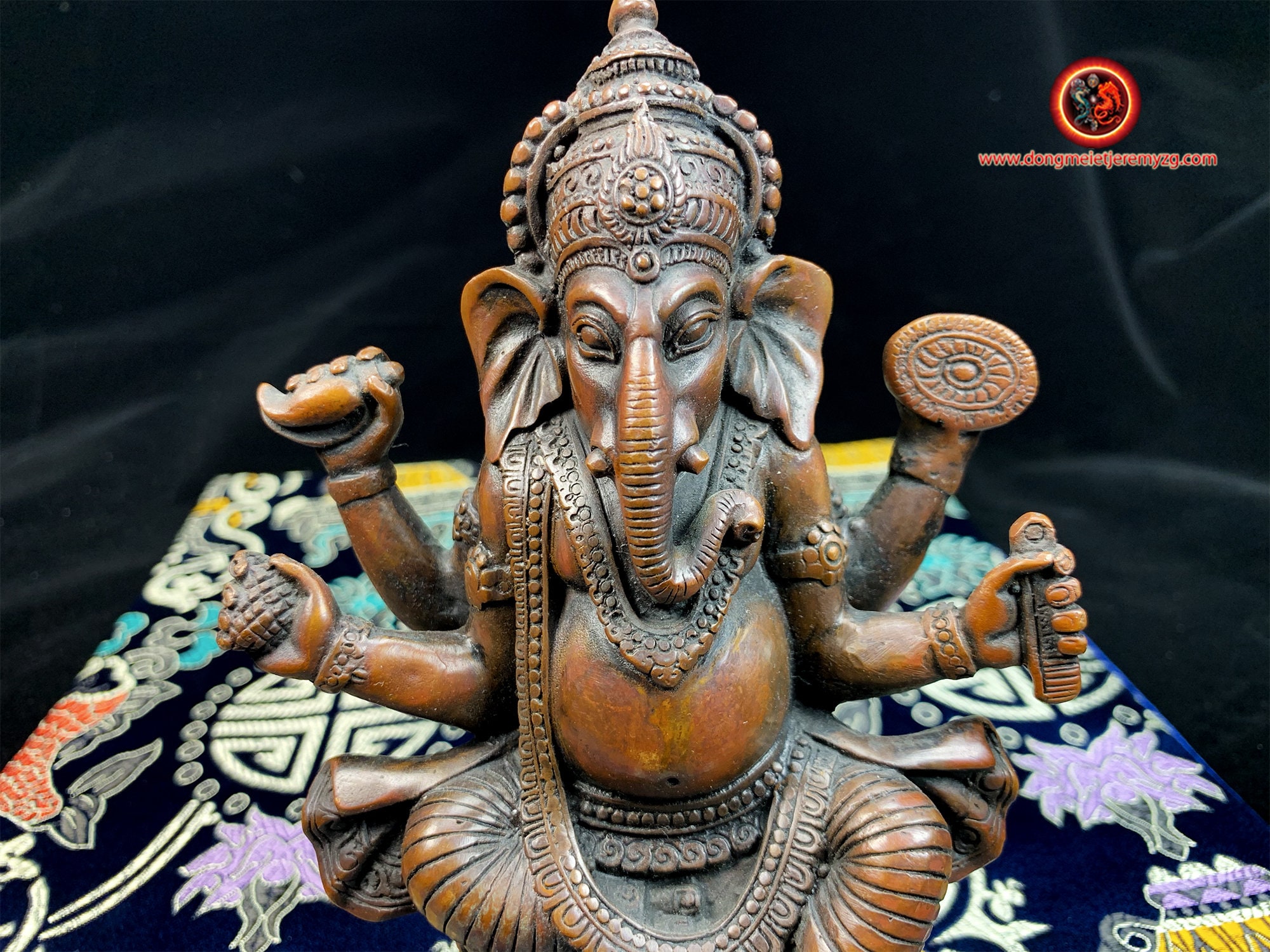 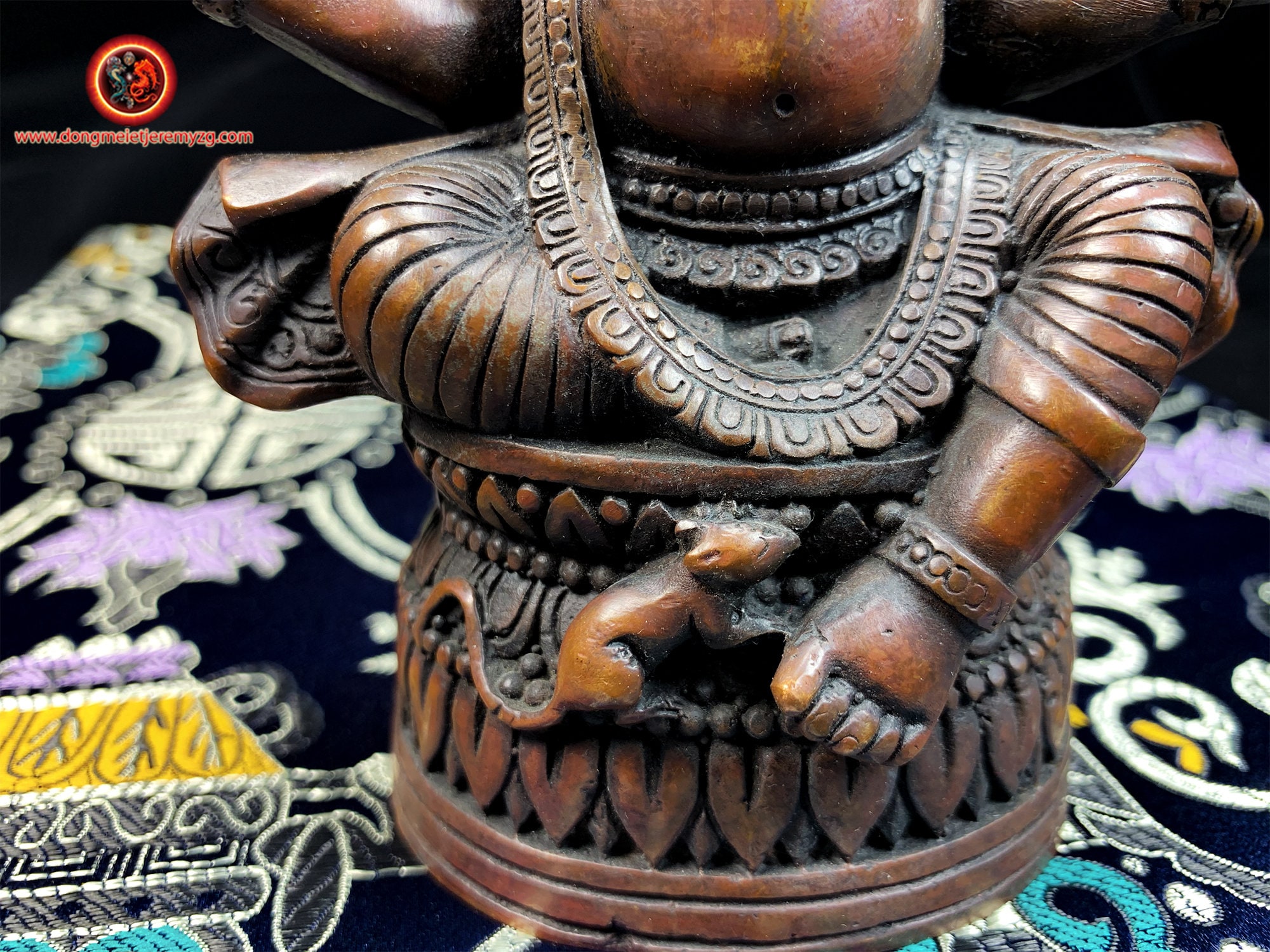 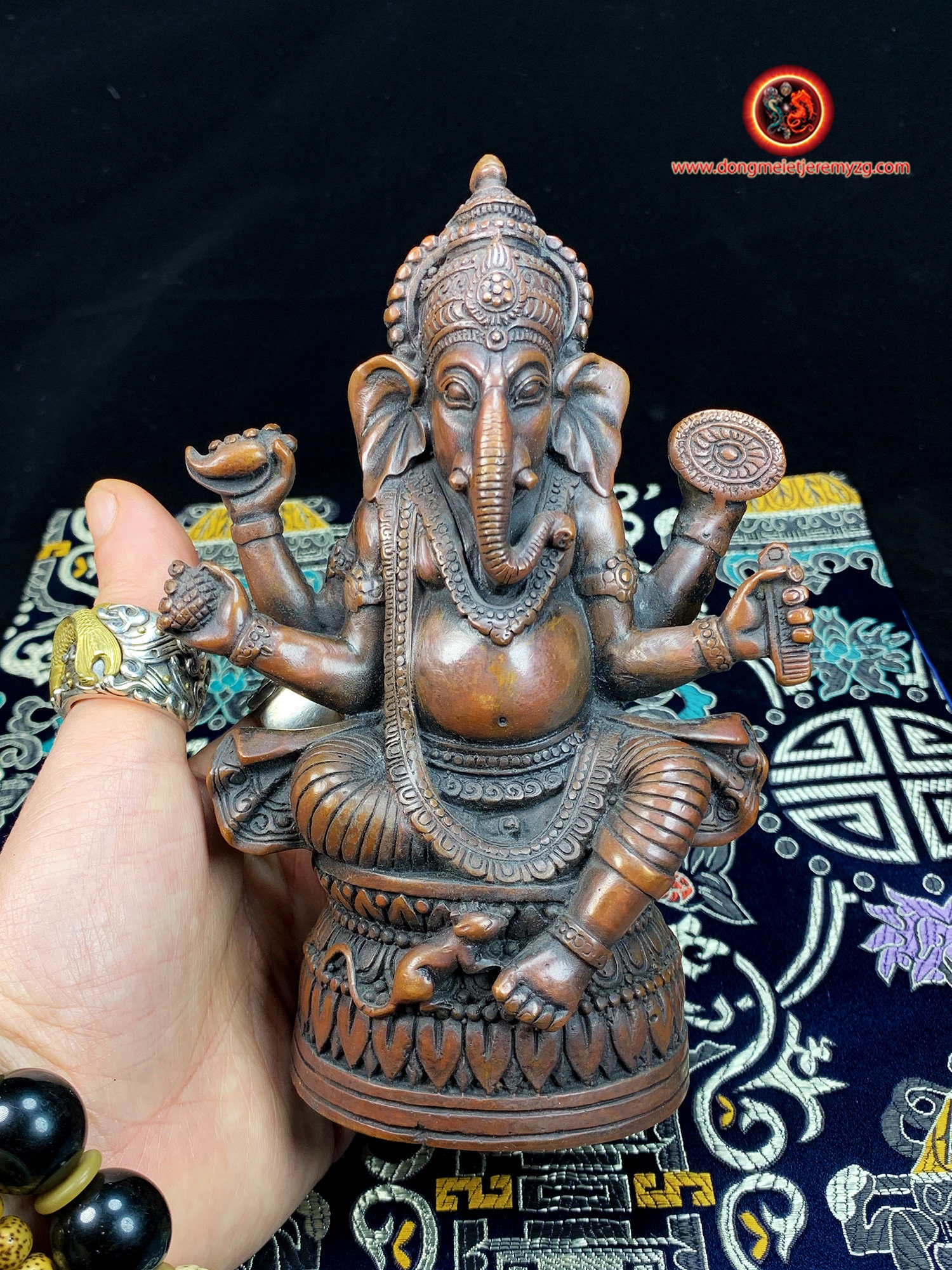 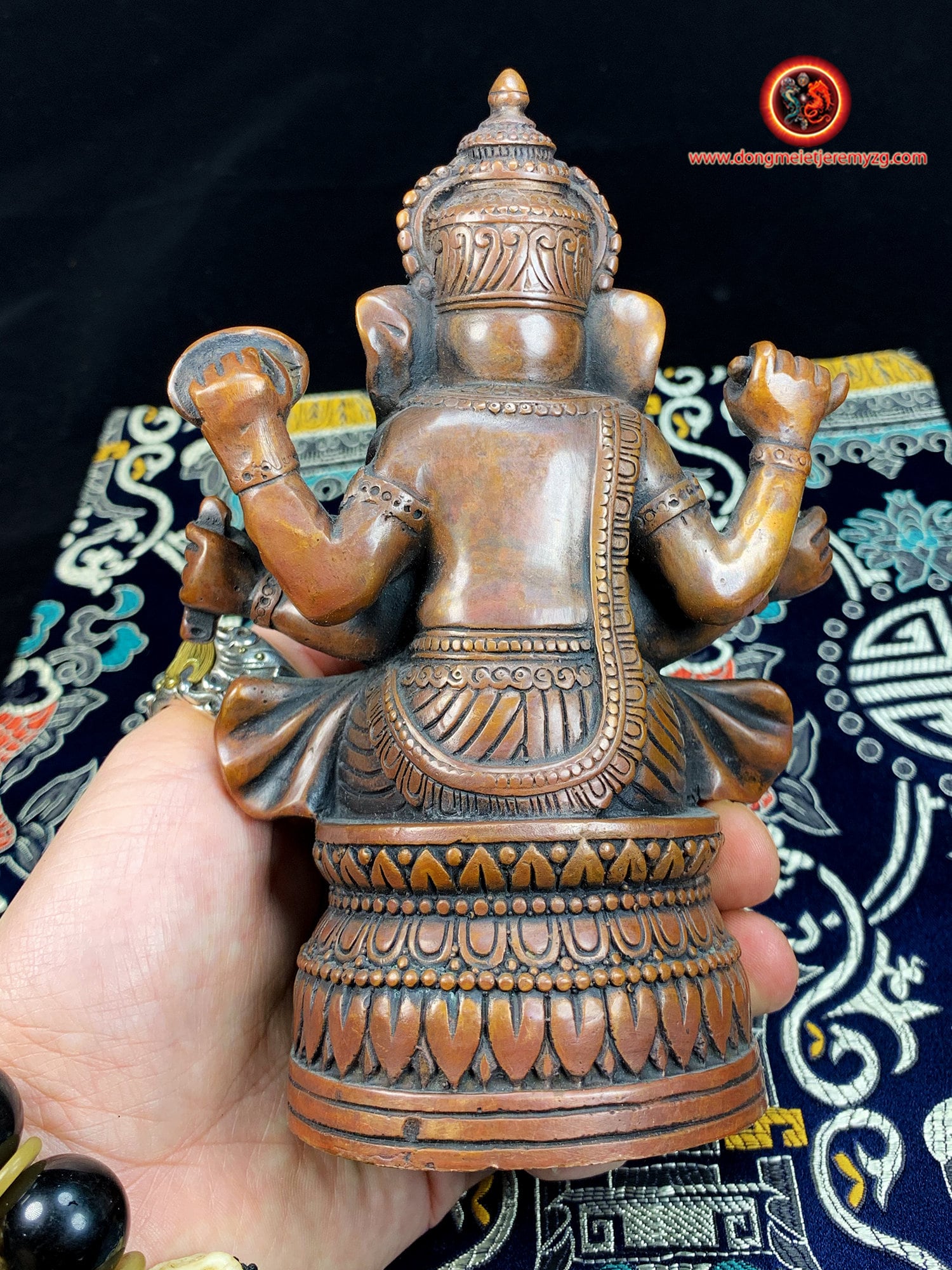 To view our entire collection of Buddhist statuettes, please click on this link
https://www.etsy.com/fr/shop/DongmeietJeremyZG?ref=seller-platform-mcnav§ion_id=22229988

To view our entire shop, please click on this link
https://www.etsy.com/fr/shop/DongmeietJeremyZG?ref=seller-platform-mcnav


A legend tells that a fight took place between the two ganesh, that the Buddhist won and tore off the head of the Hindu in place of his own. More seriously, Ganesh was incorporated into Buddhism by its tantric form which originated in India in Odisha and then traveled first to Nepal by Indian traders, and to China, then to Japan which we will talk about a little below, the divinity having taken an interesting place in the shingon and tendai forms of Buddhism of the archipelago.


The elephant-god Ganesh (or Ganesha/Ganapati, also sometimes called siddhi data) is one of the most popular gods of Hinduism and is also widely represented both in the Temples of Theravada Buddhism (India, Thailand, Indonesia...) and in those of Vajrayana (Tibet, Nepal...). He plays an important role in Tantrism and is present in the Tibetan pantheon where he is recognized mainly as a deity of wealth but is also part of the attributes of some wrathful deities, somewhat frightening, terrible, secretive and fearful, avoiding obstacles.


Apart from Tibet, the deity has left little trace in China, probably swallowed up with the Chinese esoteric current Tangmi, centered on the Buddha Vairocana, disappeared from 845, date on which the full rise of Buddhism, its golden age between the period between the Sui and Tang dynasties extending from the beginning of the seventh century to 845 abruptly ended. The Tang Emperor Wuzong, of Taoist confession issued an edict against the Manicheans, Buddhists and Nestorians, religions of foreign origin. After the persecution, only the Chan and Pure Land currents remained visibly. Typical Chinese esoteric Buddhism will still leave some traces, merging into the two surviving schools. Then, Tibetan Lamaism took the vacant place becoming the imperial religion under the Yuan dynasty, as well as the last dynasty, the Manchu Qing dynasty. In short, Tangmi or the "secret art of the Tang" disappeared completely in China.


The Japanese name of Ganesh is Shōten (聖天) or Kangiten (歓喜天), Japanese Buddhism considers it a manifestation of Shō Kannon Bosatsu (聖観音菩薩). In Japanese, the kanji 天 is used as the equivalent of the Hindu Deva.

The cult of Kangiten began in Japan around the eighth - ninth century. Importation due to Kukai (July 31, 774 - April 22, 835) scholar and official at the Japanese imperial court (early Heian period), holy founder of the esoteric Shingon Buddhist school, during his trip to China in 804, with the aim of initiating the tantric form of Buddhism. There he met the eminent Buddhist scholar Pranja from the Gandhara region, the cradle of Mahayana or Great Vehicle, a region located in the northwest of present-day Pakistan.

Pranja, a former student of Nalanda, a prestigious center of Buddhist studies in northern India, was an important importer of Buddhist texts in China.

After a decade-long trip to China, Kukai returned to Japan and introduced with his return, tantric Buddhism and introduced several Hindu deities including Ganesh, thus founding the Shingon current, ensuring somewhere the survival of the Chinese Tangmi.


Then it is necessary to go 3 decades after the death of Kukai better known under the name of Kōbō-Daishi, to find the first texts concerning the cult of Ganesh / Kangiten in Japan. The "Sho Kangiten Shikiho" or "Sho Kangiten ritual" composed around 861 detailing the various tantric rituals.


Just like the story of the Indian Ganesh, Kangiten began as a malevolent god who could create obstacles and therefore had to be worshipped in order to avoid trouble. But over time, he became a Japanese god of joy and happiness.

Ganesh is the God of wisdom, intelligence and prudence, among other patron saint of schools and teachers. In Japan, as in Thailand, he is mainly invoked for wealth and financial success, prayed to by merchants but is also the God of artists and all "creatives".

Kangiten is considered to be endowed with great power, considered protector of temples and generally worshipped by players, actors, geisha and people of the so-called floating world. Due to Kangiten's esoteric sexual nature, his image is often masked. Mantras are often prescribed in ritual texts to appease the deity and even to drive away this obstacle maker. Rice wine (sake), radishes (daikon) and "bliss-buns" (kangi-dan), a fried confectionery filled with red bean paste that is based on the modak offered to Ganesha, are offered to the god.

The divine role of wealth is reminiscent of the Taoist form of the Xth-century Chinese monk Milofo, who undoubtedly took the place in this function in Ganesh.


It is the god who removes both material and spiritual obstacles for his worshippers. He is the son of Shiva and Parvati, the husband of Siddhi, the success and Riddhi, the wealth. The Buddhist Ganesh has its two defenses intact. The Hindu ganesh has only one defense, having broken one to write the Vedas.

Nowadays, 250 Japanese temples practice Kangiven worship, the most active center is Hozanji Temple, located on the eastern slope of Mount Ikoma outside Osaka City, founded by the charismatic Japanese monk in the 17th century Tankai known as Hozan (1629-1716).


A legend surrounds the origin of the foundation of the temple. Hozan in search of supernatural powers or "siddhis" failed because of the insurmountable obstacles posed by Kangiten. Around 1678 the master of Tankai revealed to him the existence of Mount Ikoma, a miraculous place being neither dream nor reality. On these revelations, Hozan, in order to appease the elephant god, made an idol of Kangiten to make him the guardian of the place by imploring him that in return the deity would protect him and help him reach the siddhis.

For all information on our activity and dates of exhibitions in mineral fairs.
https://www.facebook.com/pages/Dongmei-Jeremy-Zhang-Guelle/103104533147394?ref=hl