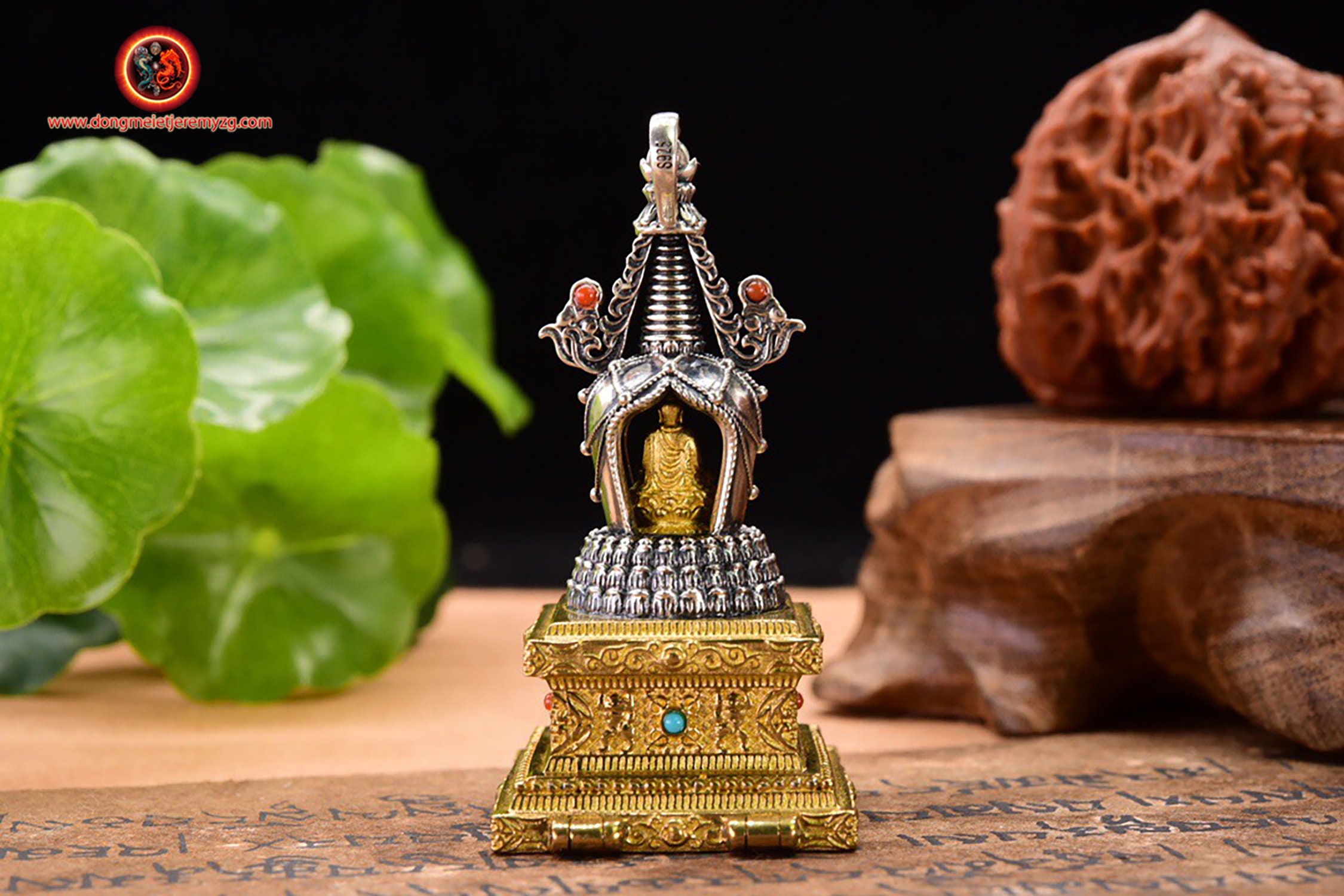 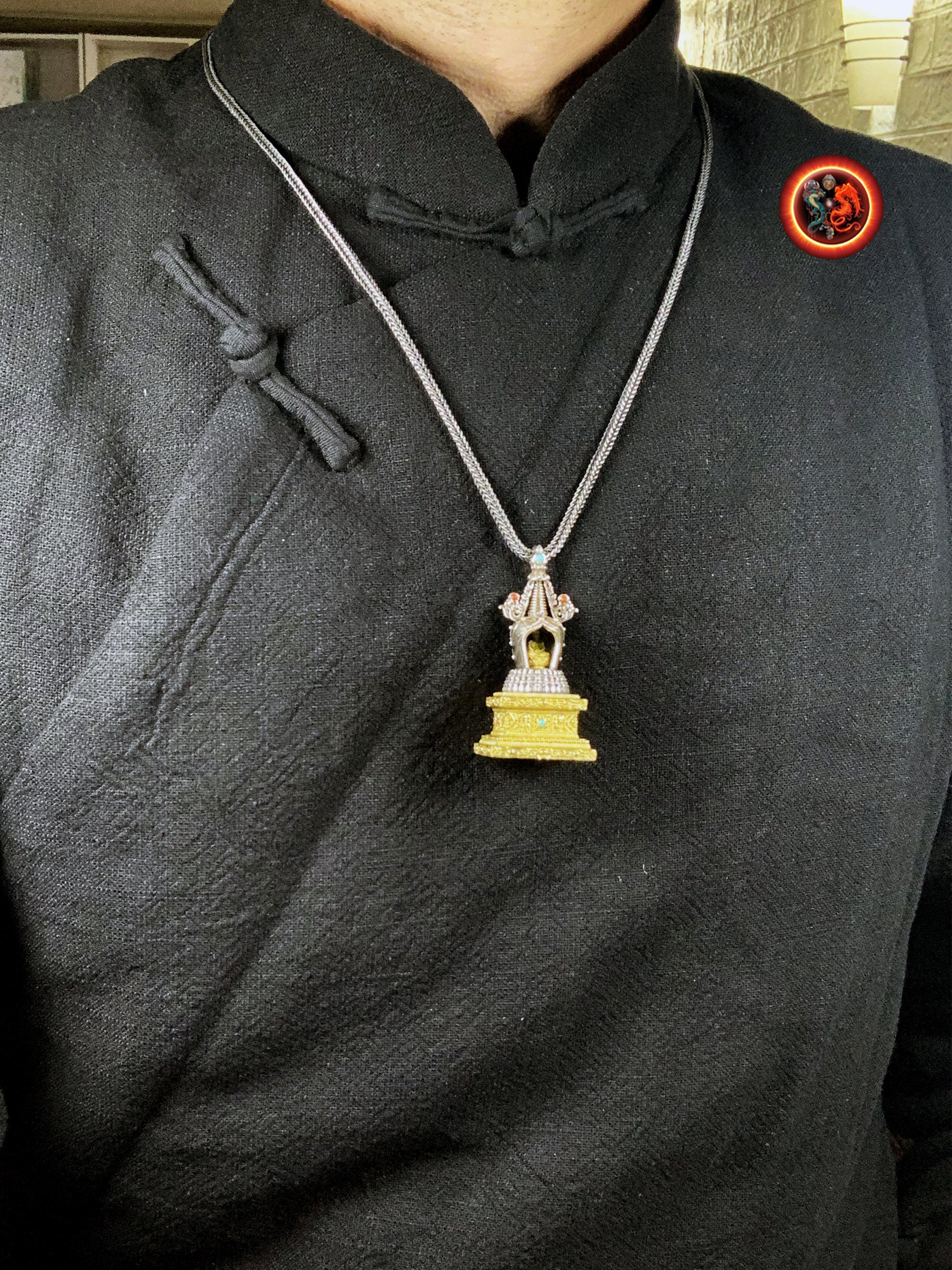 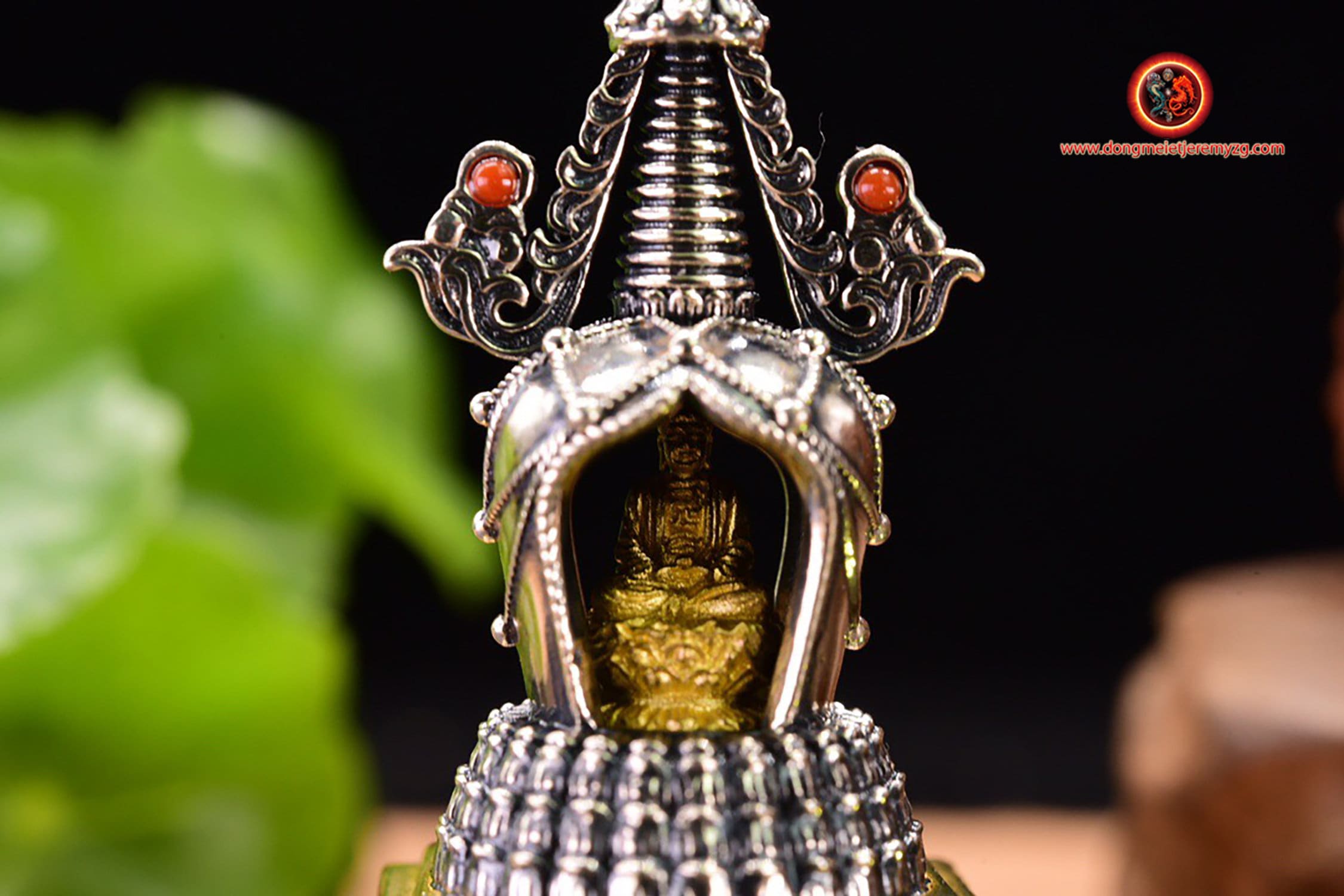 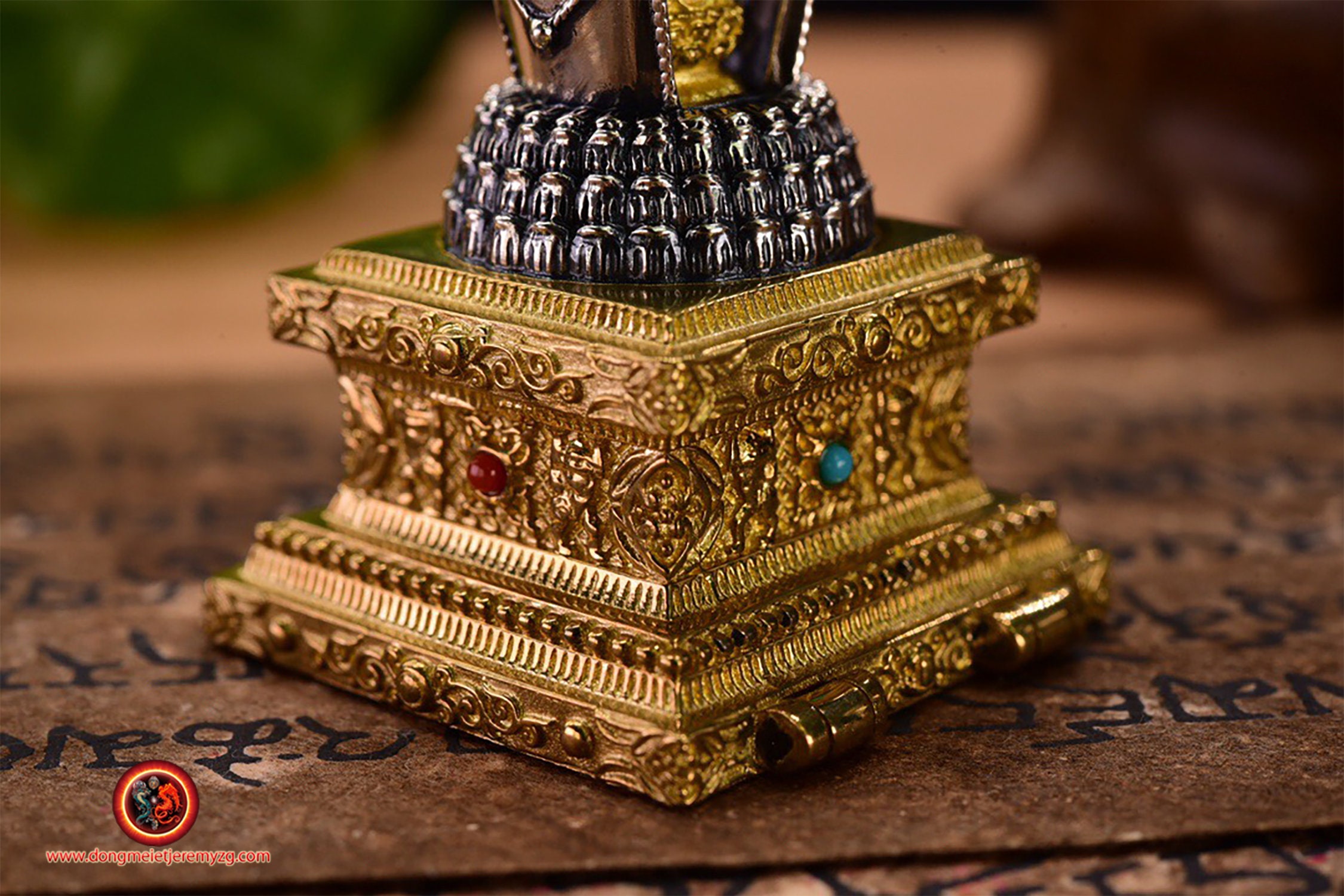 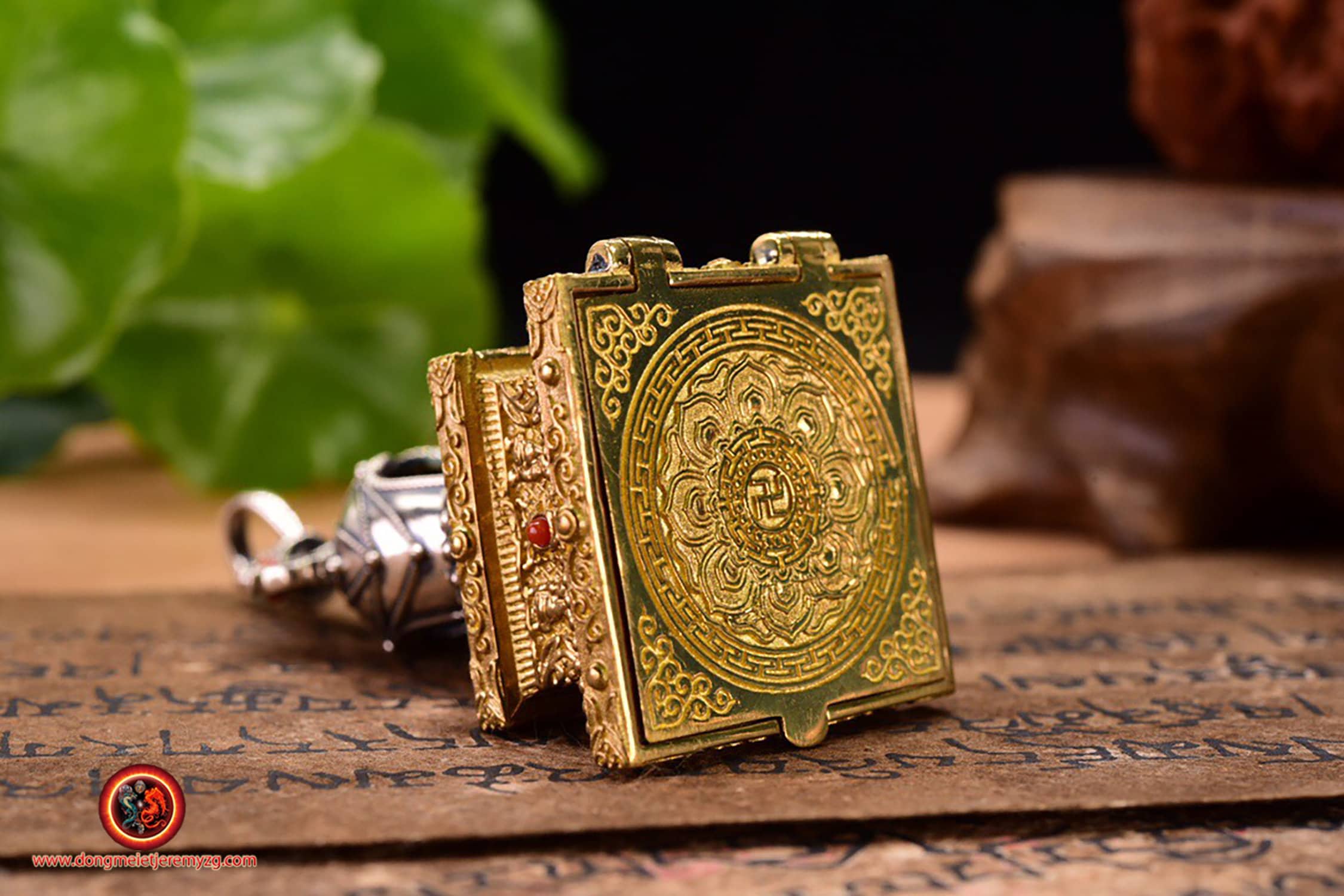 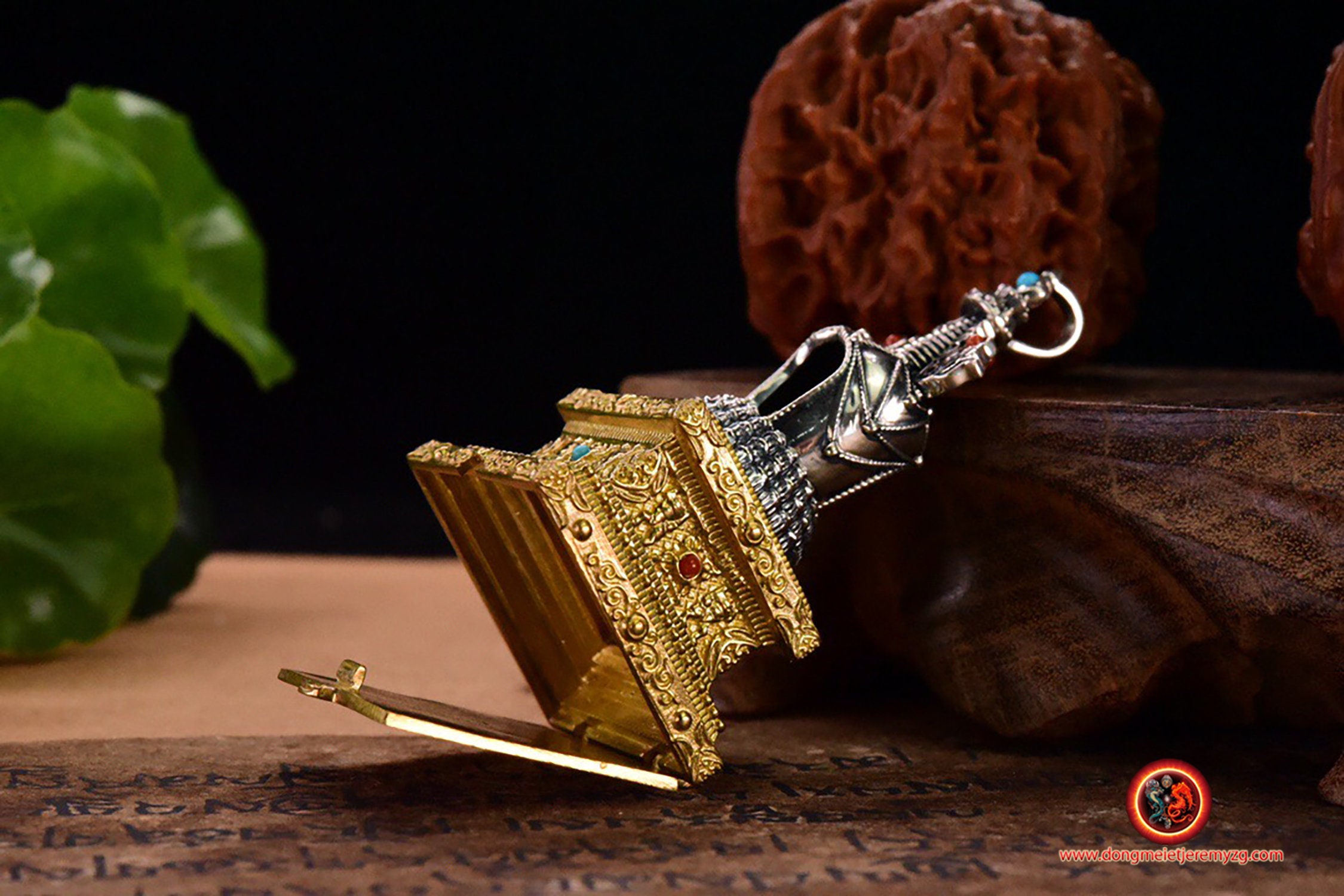 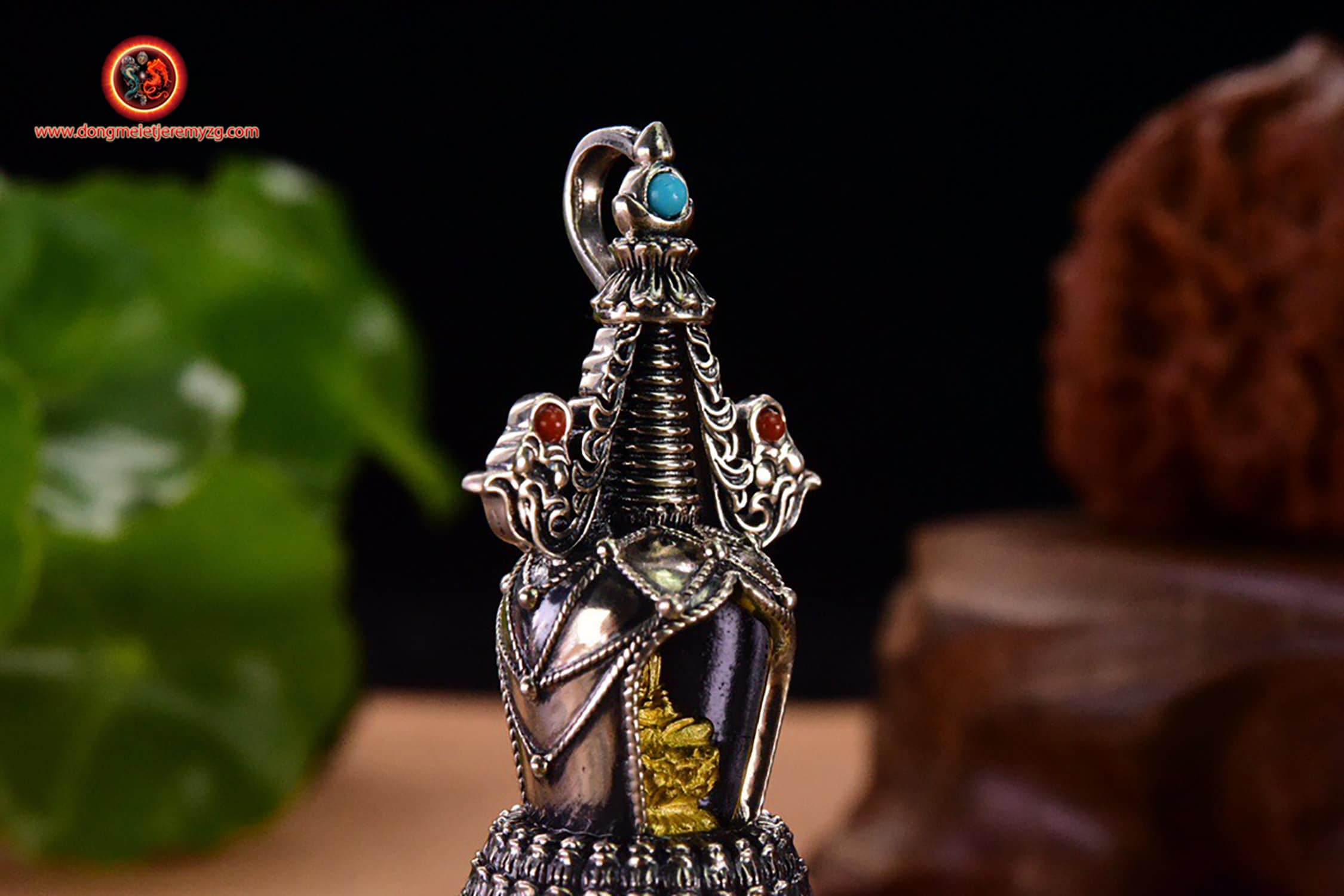 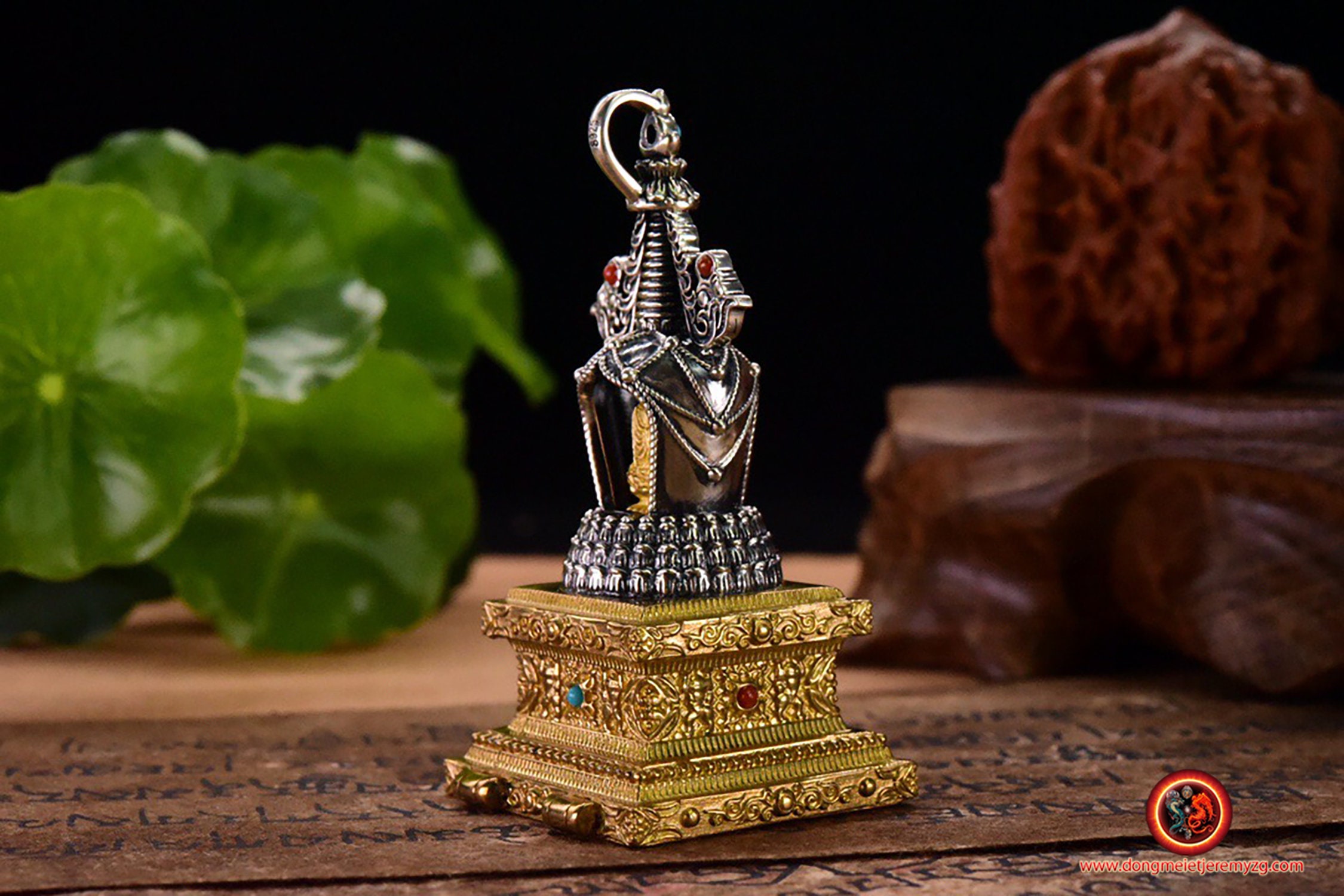 The reliquary opens at the bottom to deposit prayers, mantra scrolls or all consecrated things.

A stūpa is a mound-like or hemispherical structure containing relics (such as śarīra - usually the remains of Buddhist monks or nuns) that is used as a place of meditation. A related architectural term is a chaitya, which is a prayer hall or temple containing a stupa.

The Stupa, tchörten in Tibetan, shuaidpuo in Chinese, Dagoba in Sinhala, sotoba in Japanese, can literally be translated as "bun", or, according to Tibetan as "support of offerings".

A typical reliquary monument, it is said to have been originally built by the lay faithful at the suggestion of Sakyamuni's disciples to house his relics.

The first stupa, of which practically nothing remains, were built of clay and were hemispherical in shape on a round base, inspired by the model of the tumuli of prehistory and the funerary mounds of the Aryan tribes. Surrounded by a square enclosure and surmounted by a pole with superimposed umbrellas, they were soon replaced by dome models carved on a square base, this time made of bricks and stones. In the center of the square base (in the central axis of the building) is a reliquary intended to receive relics of holy figures or sacred texts.

The shape of the stupa depicts the Buddha, crowned and sitting in a meditative posture on a lion's throne. Its crown is the top of the spire; its head is the square at the base of the arrow; its body is vase-shaped; his legs are the four steps of the lower terrace; and the basis is his throne

Although it is not described in any Tibetan text on the symbolism of the stupa, the stupa can represent the five purified elements:

The square base represents the earth and the Buddha Ratnasambhava
The hemispherical dome/vase represents water and Aksobhya Buddha
The conical arrow represents fire and Amitabha Buddha
The upper lotus umbrella represent the air and the Amoghasidi Buddha
The sun, the crescent moon and the point of dissolution, the feminine and masculine essences, the nada is space, represent wisdom and the Buddha Vairocana
The central axis, Mount Meru, is represented by a "tree of life", trunk of sandalwood or juniper ritually cut, crossing vertically the center of the stupa.

The number of tsatsas needed to completely fill the treasure depends on its size and the size of the tsatsa. For example, the kalachakra stupa in southern Spain contains about 14,000 tsatsas.

Jewelry and other "precious" objects are also placed in the treasure. They do not have to be expensive, because it is the symbolic value that is important and not the market price. It is believed that the more objects placed in the stupa, the stronger the energy of the stupa.