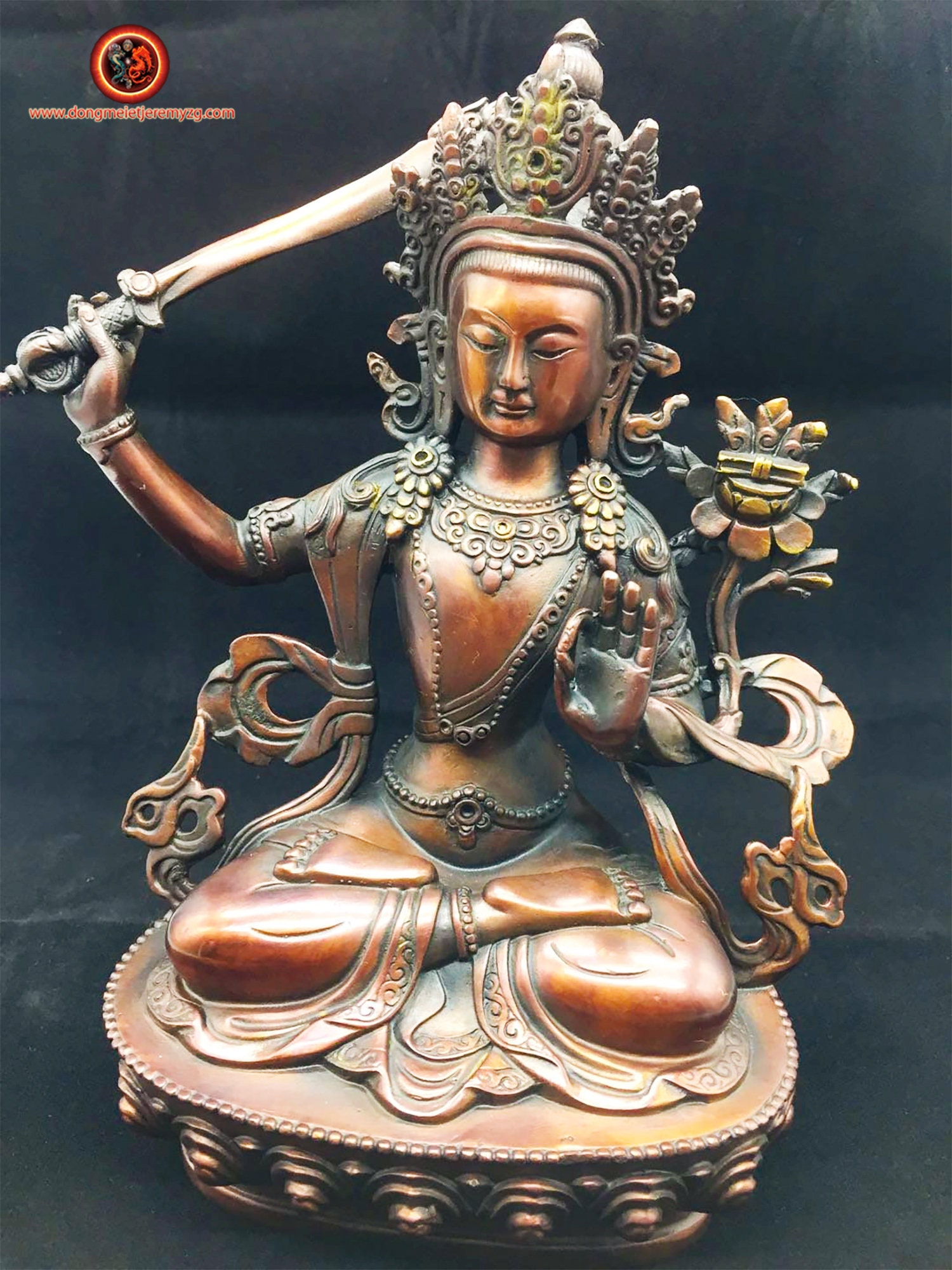 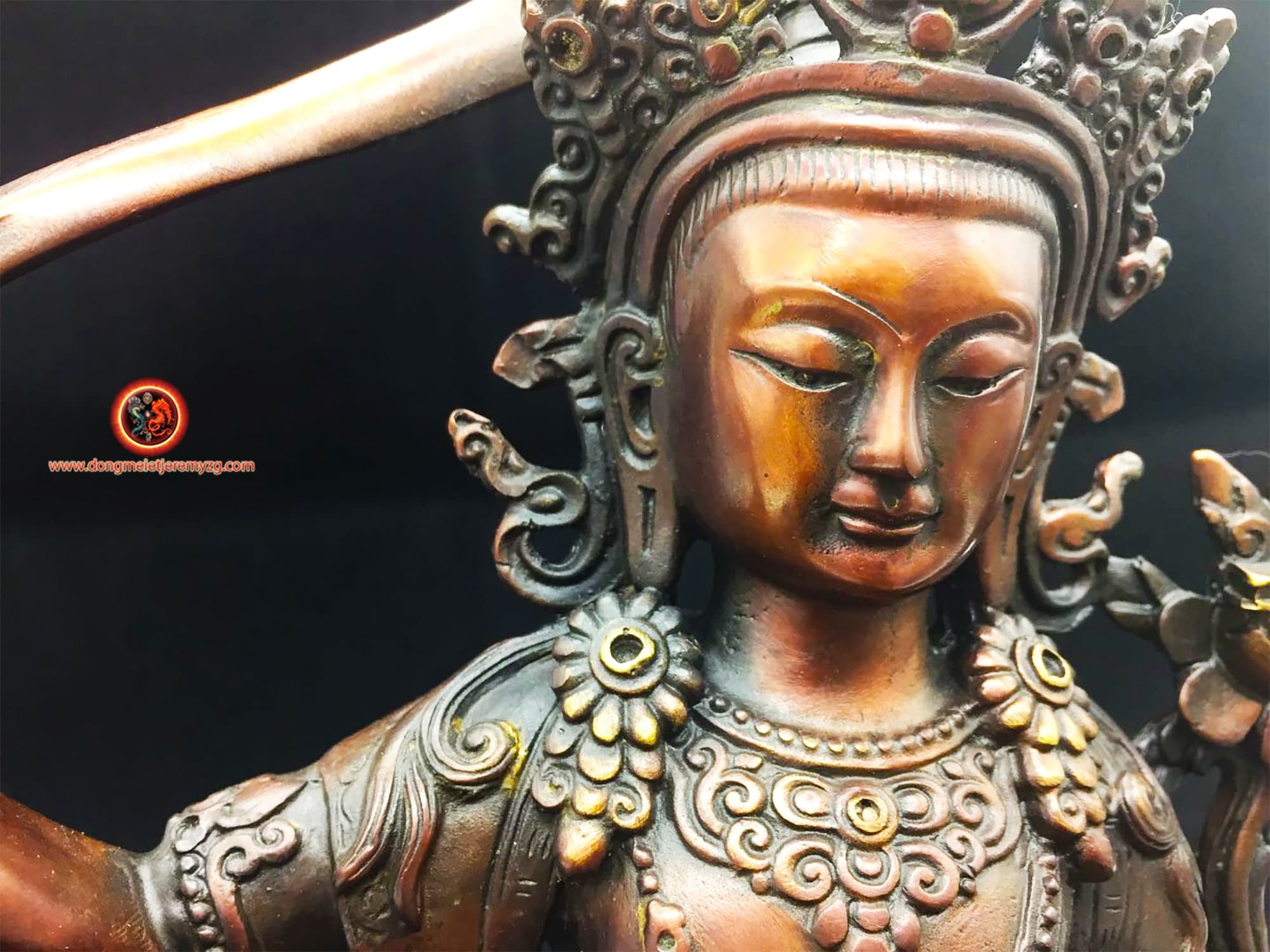 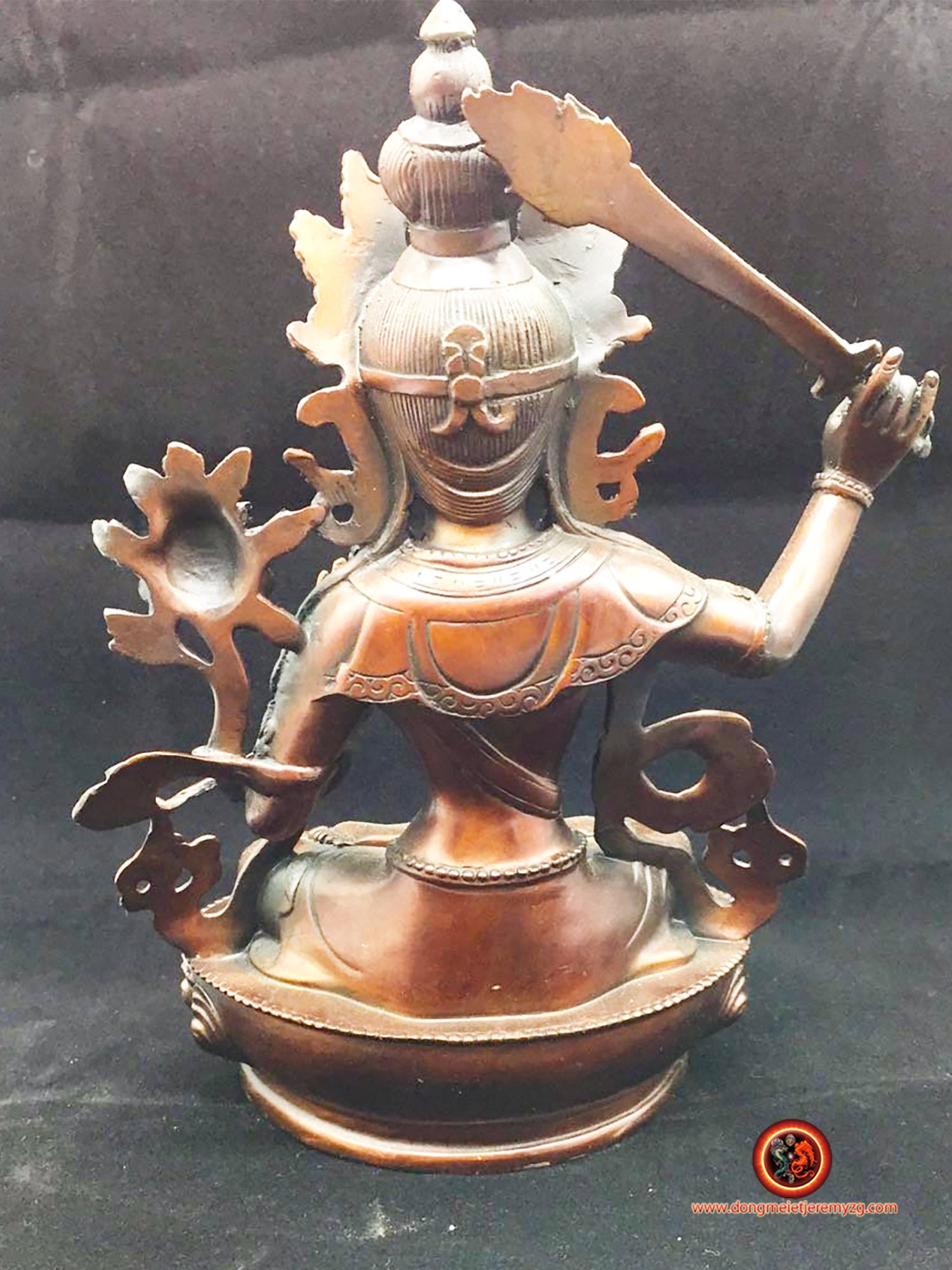 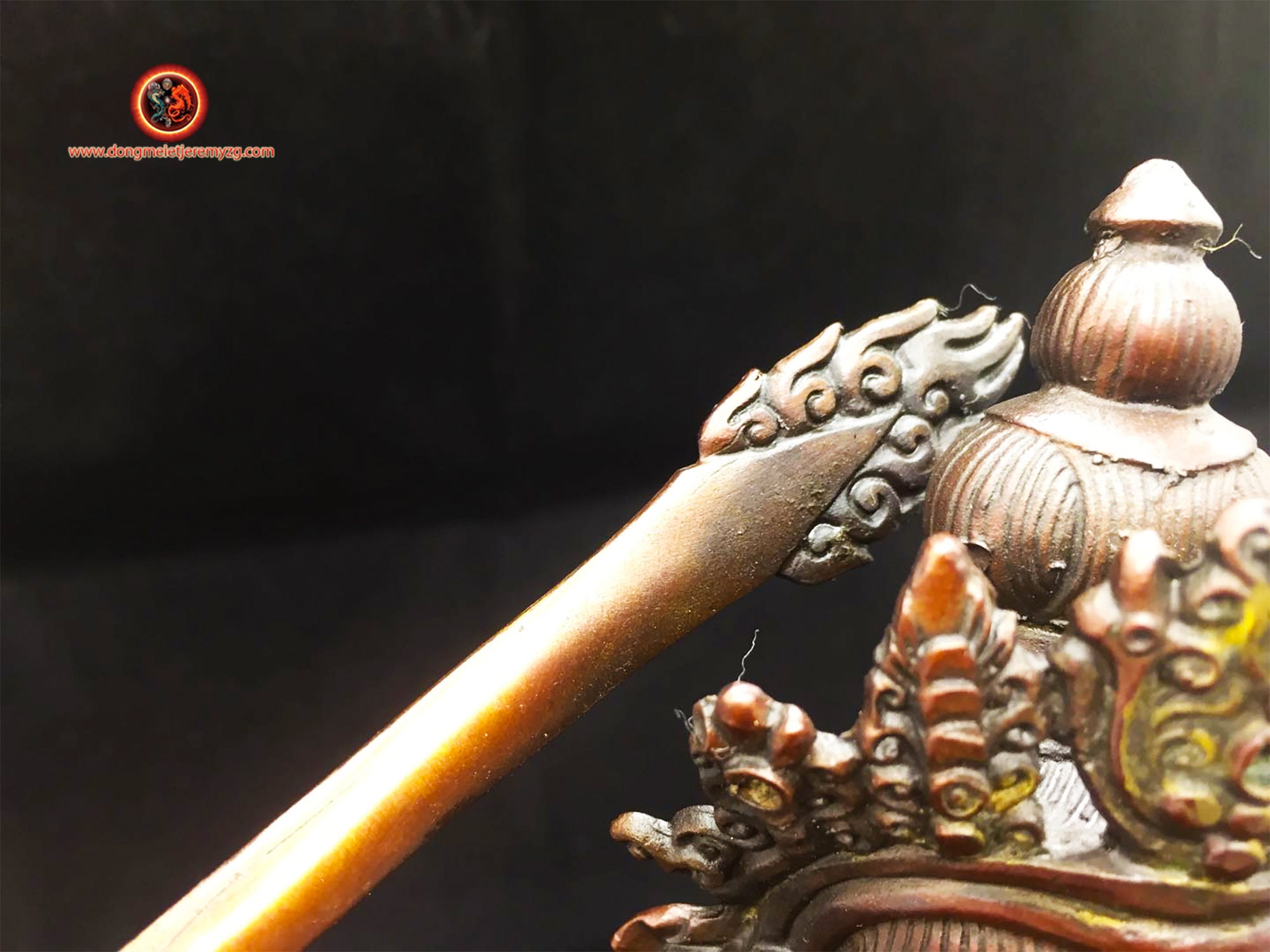 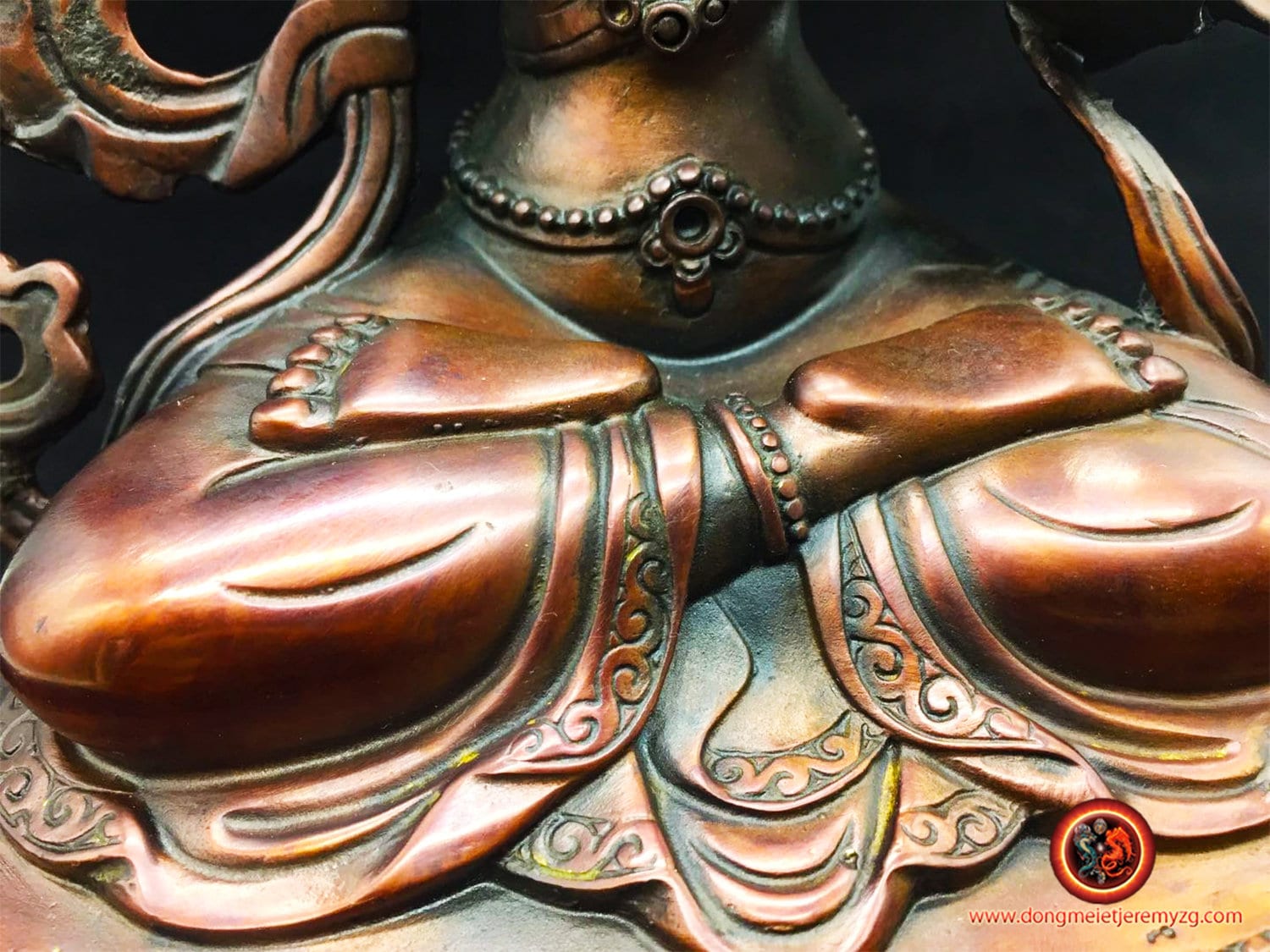 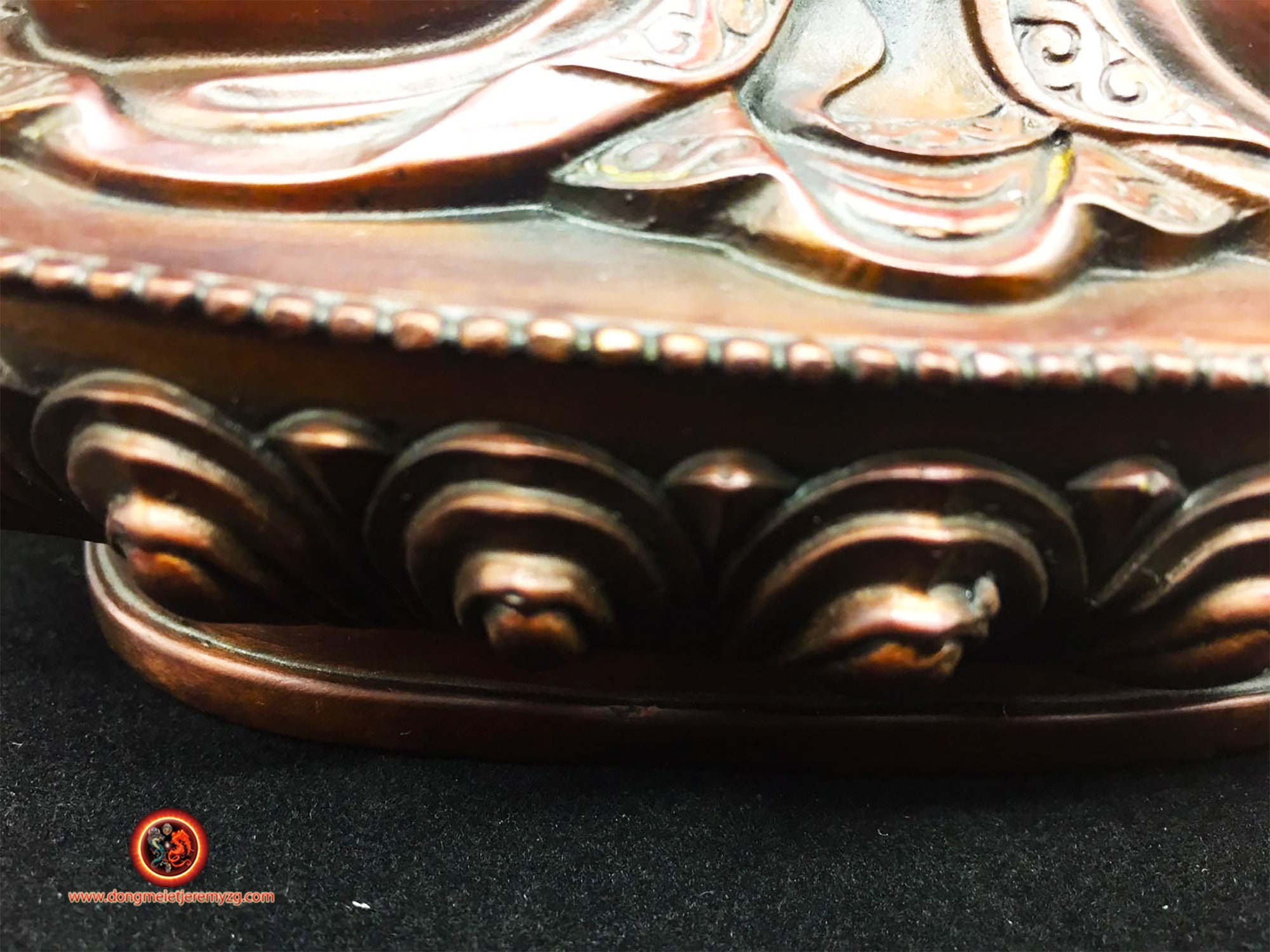 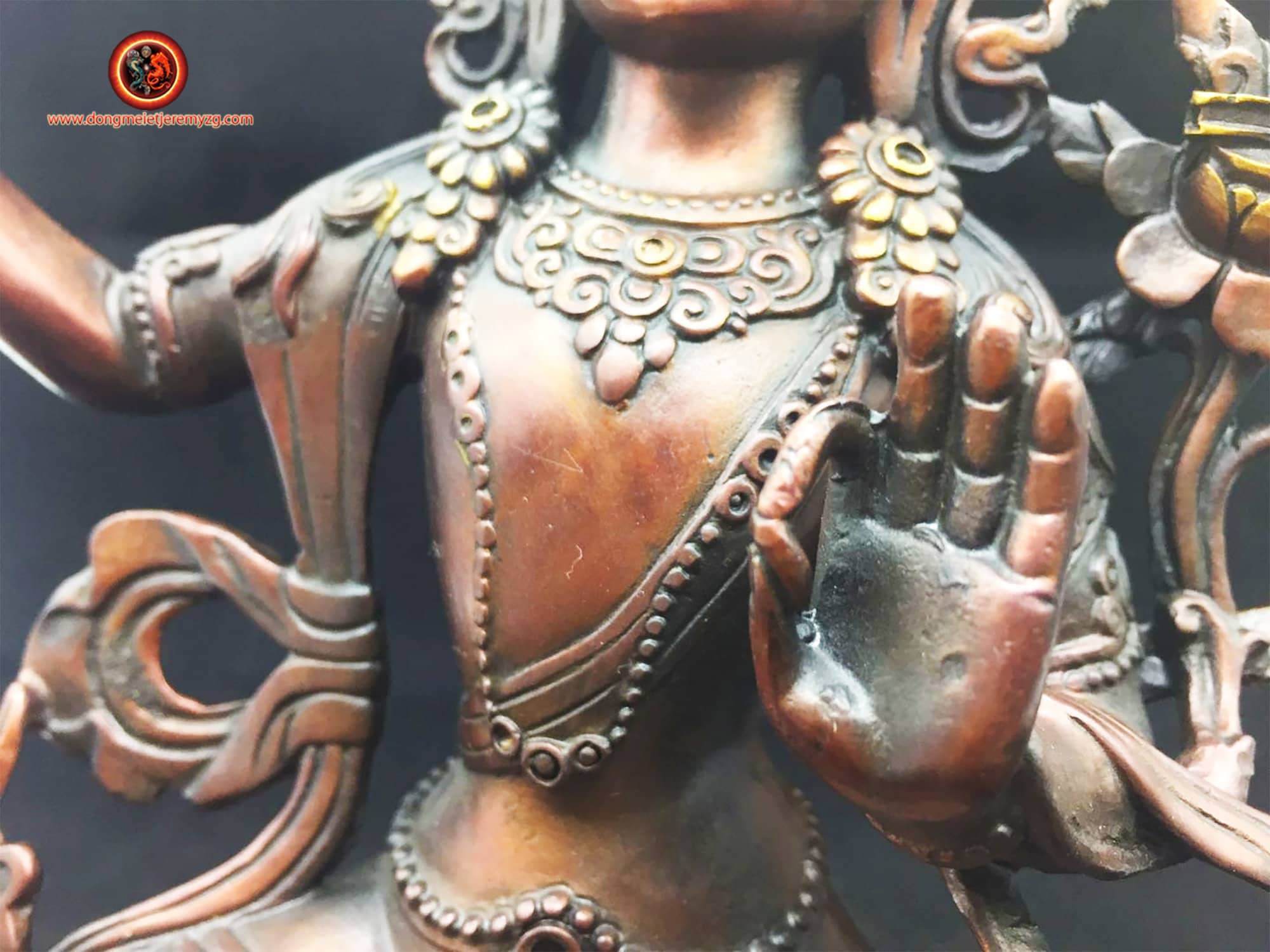 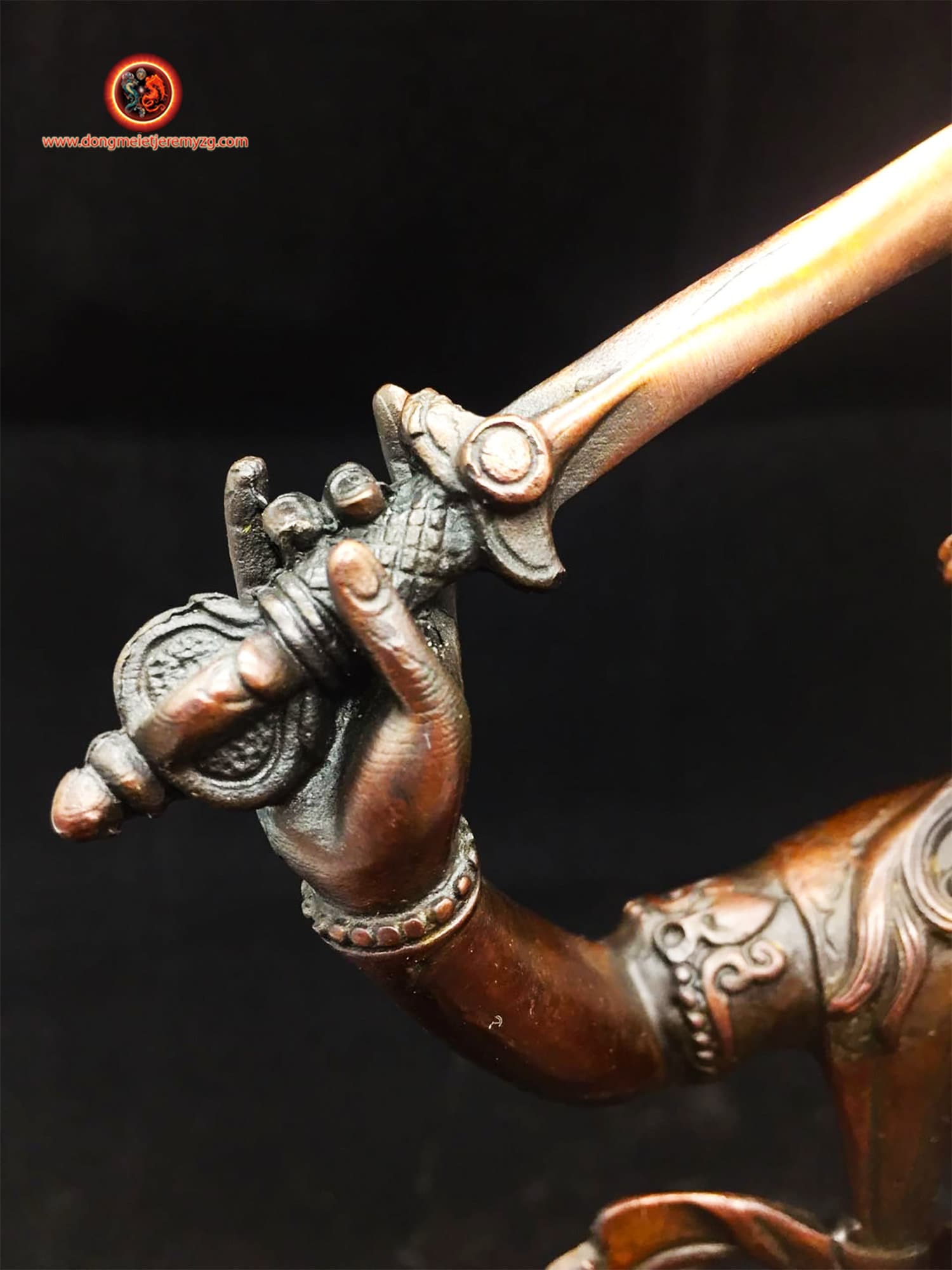 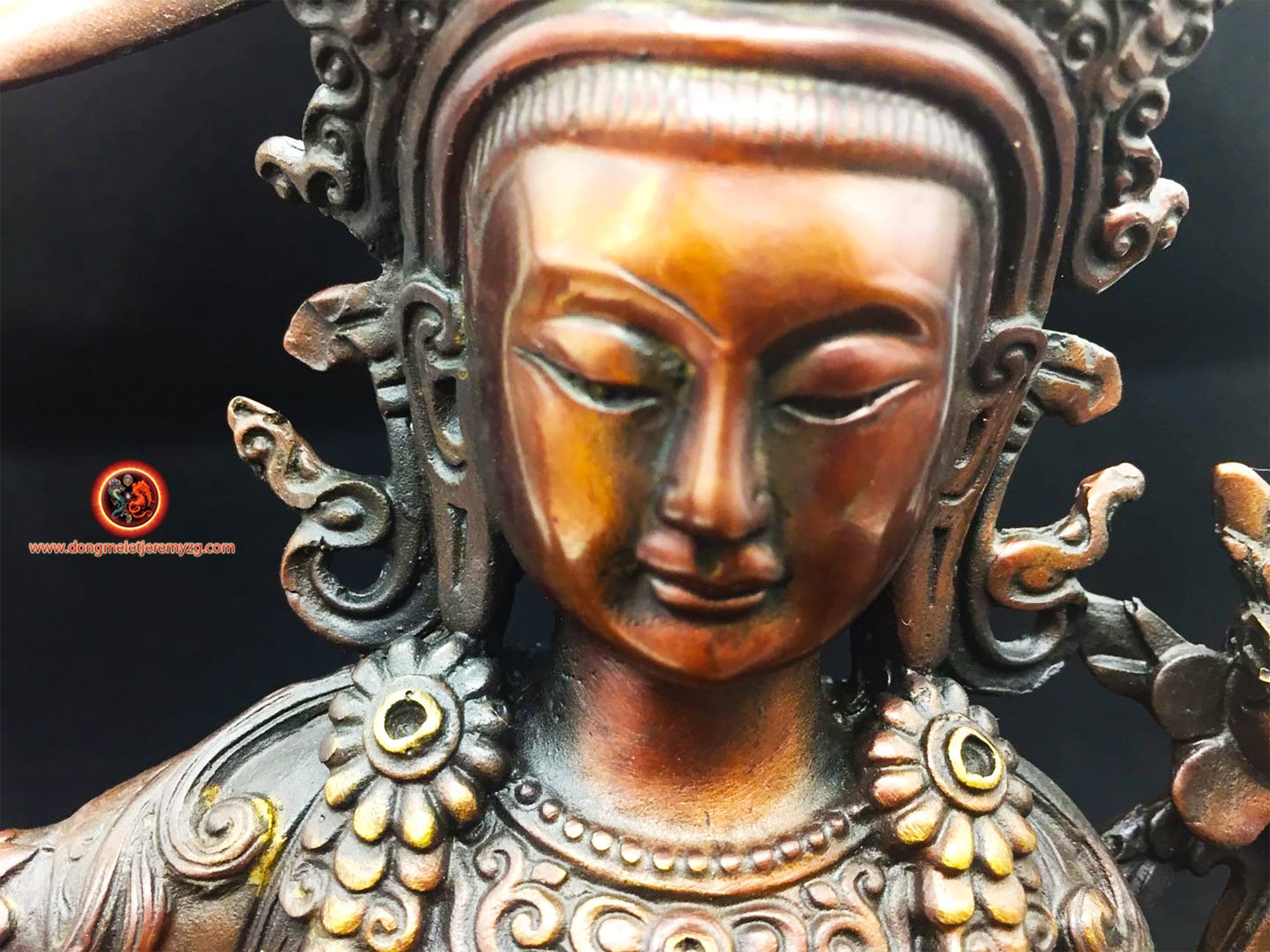 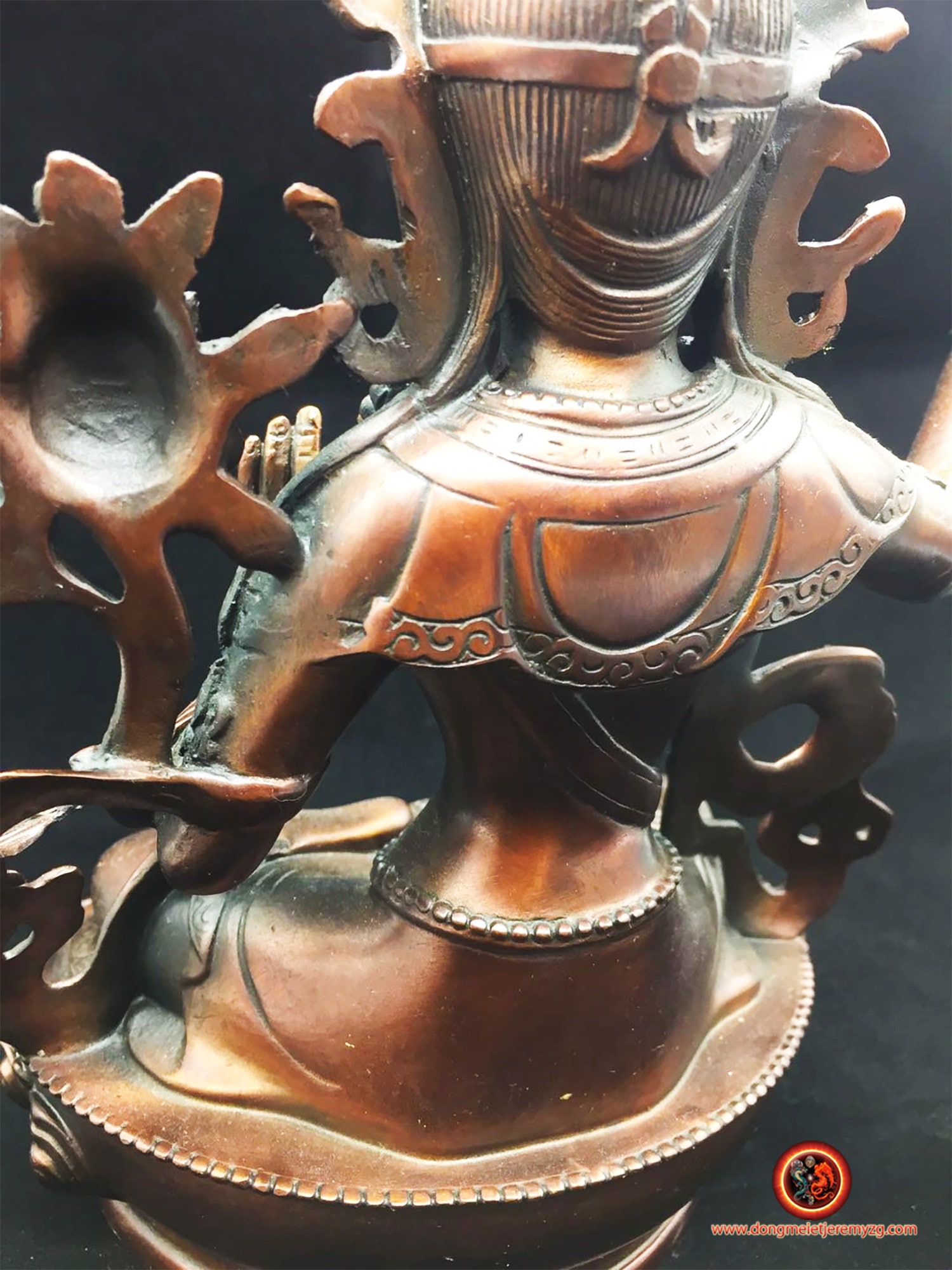 Manjushrî was a disciple of Shâkyamuni of whom he is, with Samanta-bhadra, one of the acolytes in the groups of images called in Japan Shaka Sanzon, "the three venerables of Shâkyamuni". It is "He whose beauty is charming", the Bodhisattva "of wonderful virtue and sweet majesty".
Important in Mahāyāna and Vajrayāna Buddhism. It is invoked for, among other things, success in studies. It represents the wisdom, intelligence and power of the mind. "His worship confers divine Wisdom, Dharma mastery, faithful memory, mental perfection, eloquence. He would have indefinitely delayed his accession to the state of Buddha, driven by an infinite compassion that pushed him to remain in this world until there was not a single being left to bring on the path of supreme enlightenment.
He is the protector of people born under the sign of the lievre/ rabbit.
The two main emblems of Manjushri, the bodhisattva of wisdom, are the flaming sword and sutra of perfection, in his left hand, near the heart. The flaming sword represents the penetrating intelligence of Manjushri, who slices all illusions, revealing the empty nature of all things. The sword represents above all wisdom, the discernment that tears the veils of ignorance.
Manjushrî would have been the initiator and master of the Buddhas of past ages. It should also be that of the Buddha of the future, Maitreya. "Manjushrî is the father and mother of the Bodhisattva, and he is their spiritual friend." The Buddha Himself describes Manjushrî and praises him in the Manjushrîparinirvâna-sûtra. This Bodhisattva was therefore very often represented, both in India and in Tibet, in China and Japan, as well as in Nepal of which he would, according to tradition, be the founder from China. His images appear only late in Central Asia and on some Chinese steles, associated with Vimalakîrti (jap. Yuima Koji) in the sixth century.
According to Nepalese legend, Majushri opened the Kathmandu Valley by cutting, with a blow of his flaming sword, a breach in the mountains encircling the valley. The lake occupying the latter was thus able to empty by the chobar gorges, which bear the mark of this blow.
The best known Mantra of Mañjuśrī is Om Ah Ra Pa Cha Na Dhih, The syllable-germs Dhih and Mum are associated with Manjushri. To have a good memory or develop one's intelligence one often addresses the bodhisattva of great wisdom, and the recitation of the mantra is very practiced in China.
Long version: Namah samanta buddhānām. He he Kumāraka vimukti pathasthita smara smara pratijñā svāhā.
His cult in China developed from the Northern and Southern Dynasties (420 – 589) on Mount Wutai (五台山 / 五臺山, wǔtáishān, " Mountain of the Five Terraces "). Wutai Shan is one of the four sacred Buddhist mountains of China. It rises to 3,058 m at Yedou Peak. It is located on the territory of the prefecture-level city of Xinzhou, in Shanxi Province, just a few tens of kilometers south of one of the five sacred mountains of China: Mount Heng and less than 300 km from Beijing. It was inscribed on the UNESCO World Heritage List on 26 June 2009.