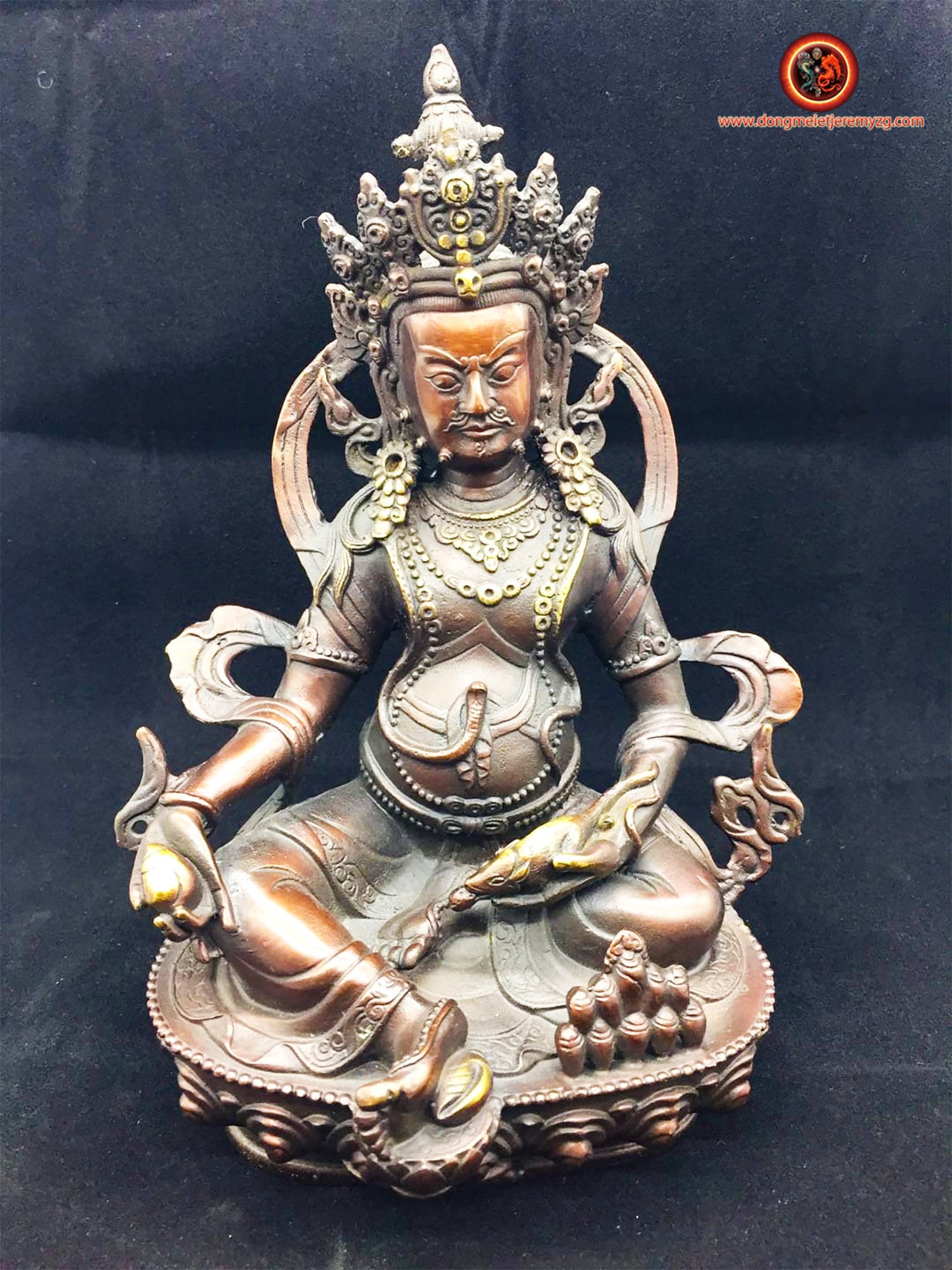 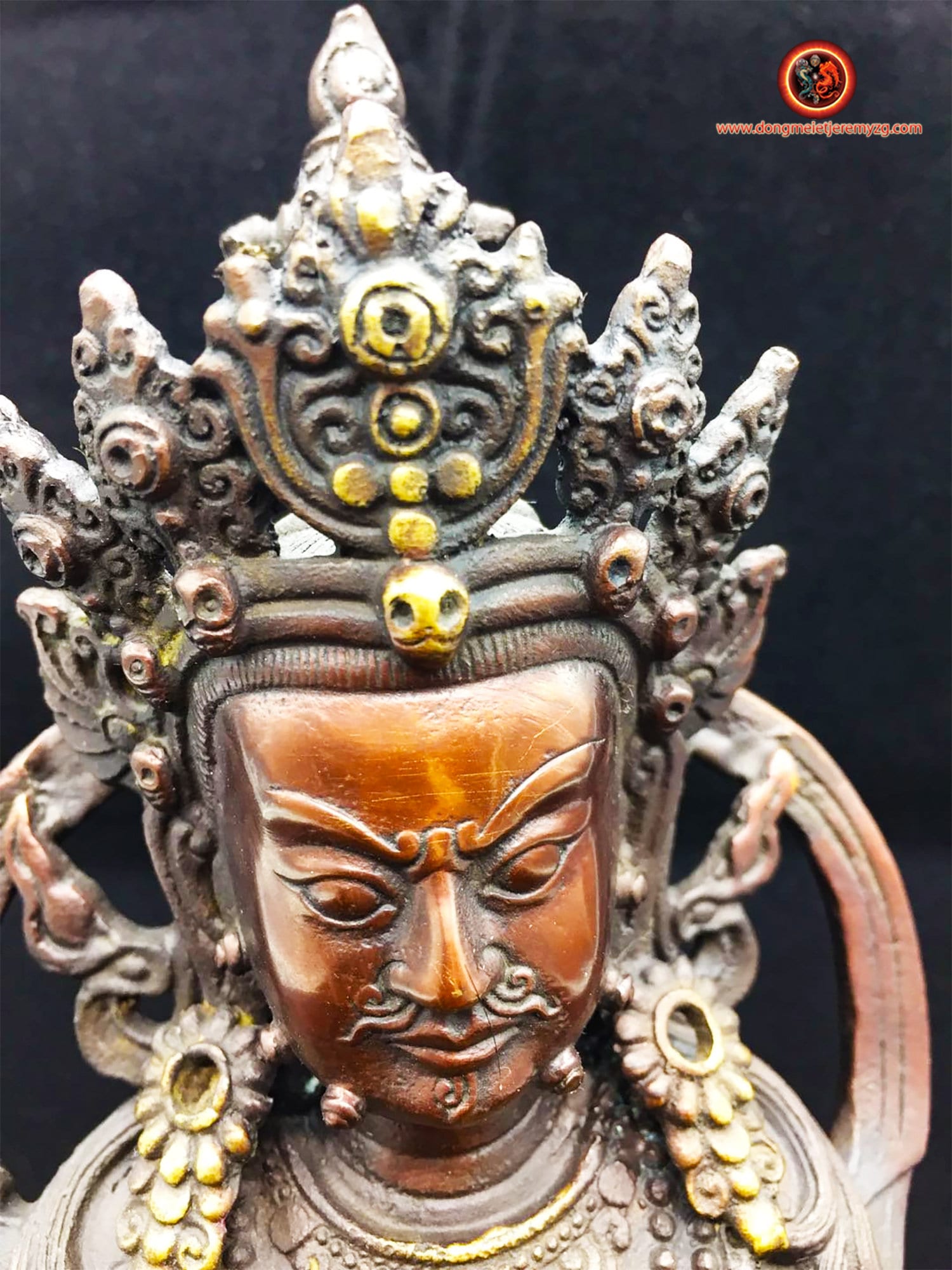 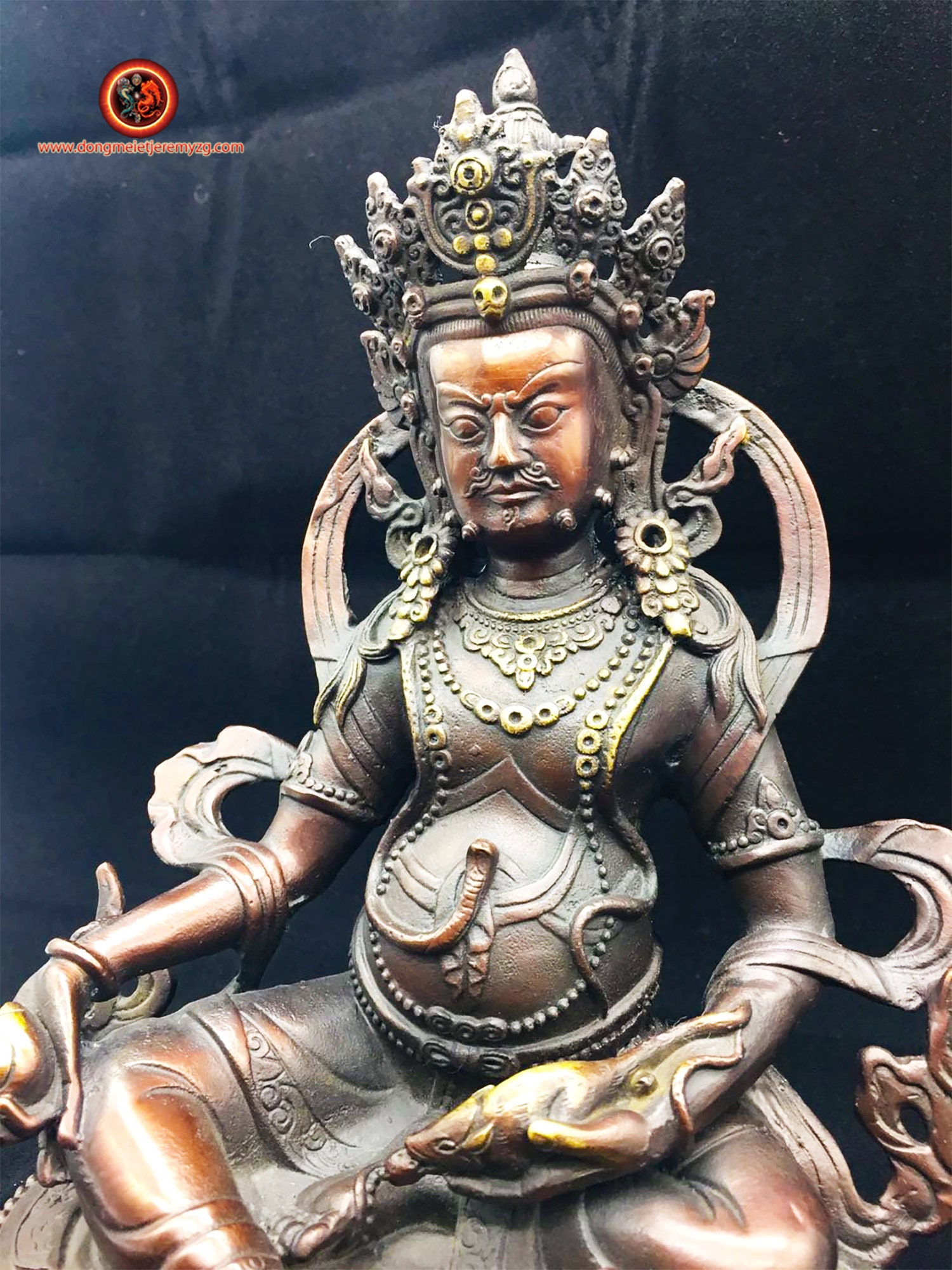 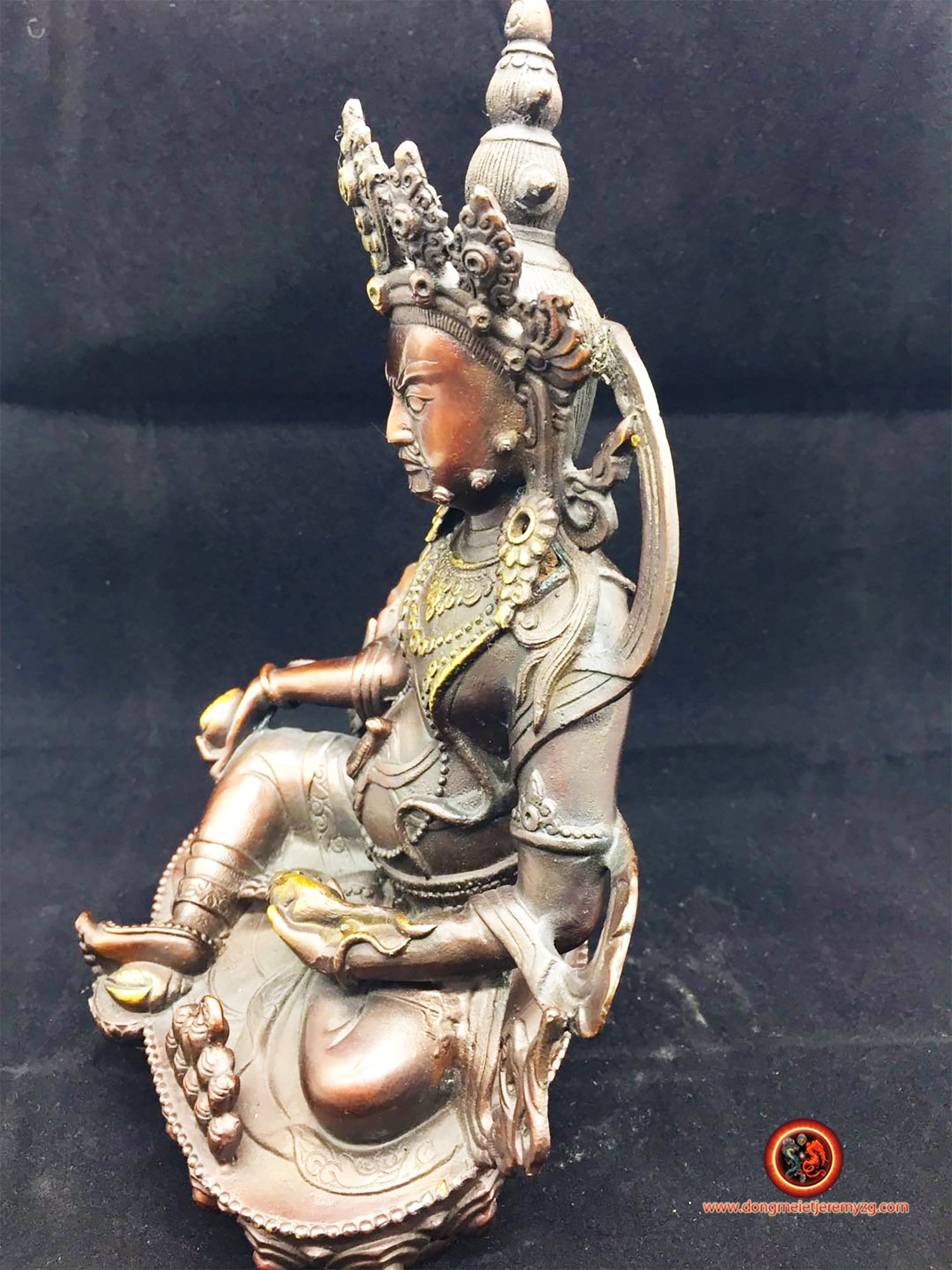 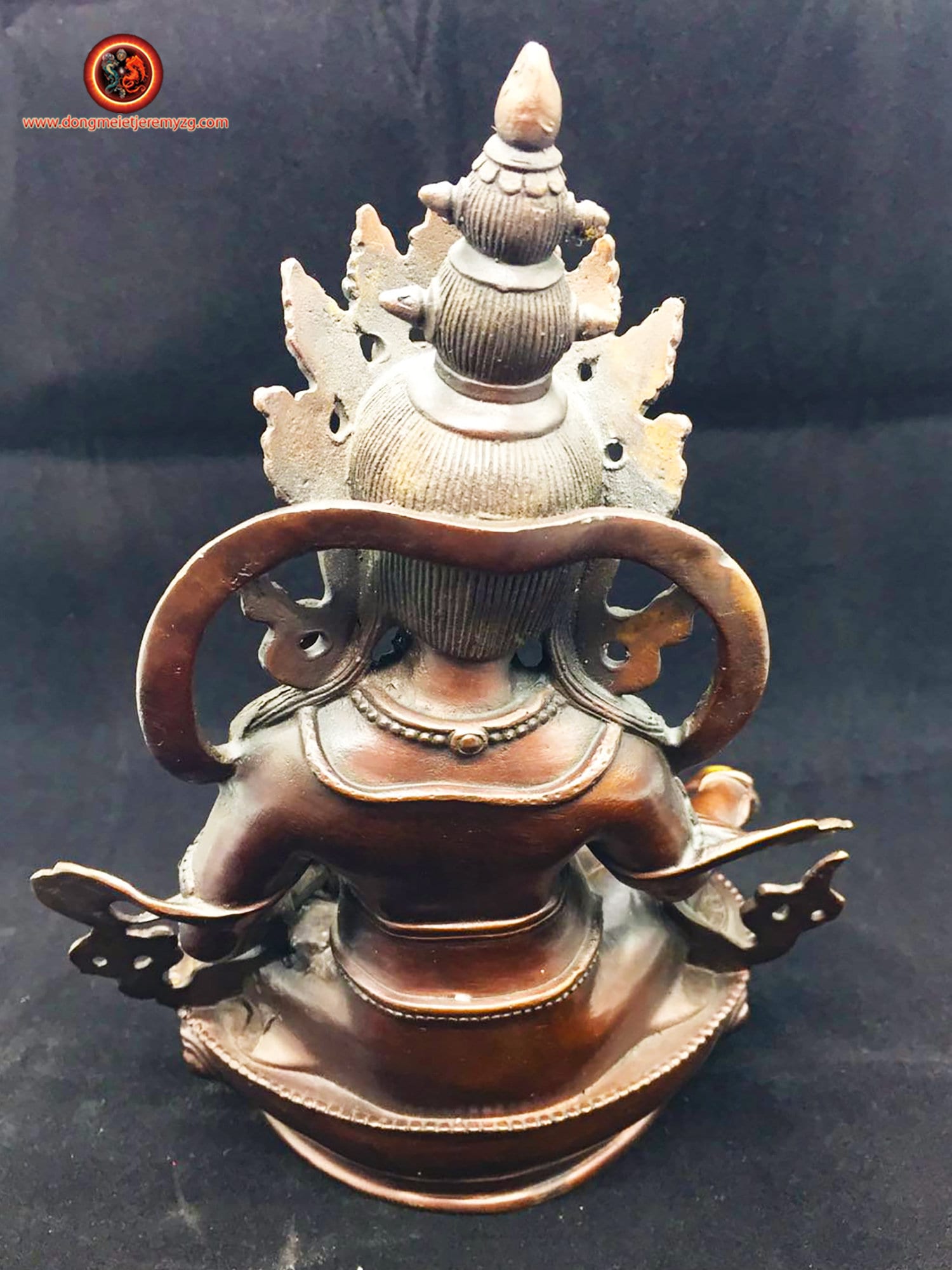 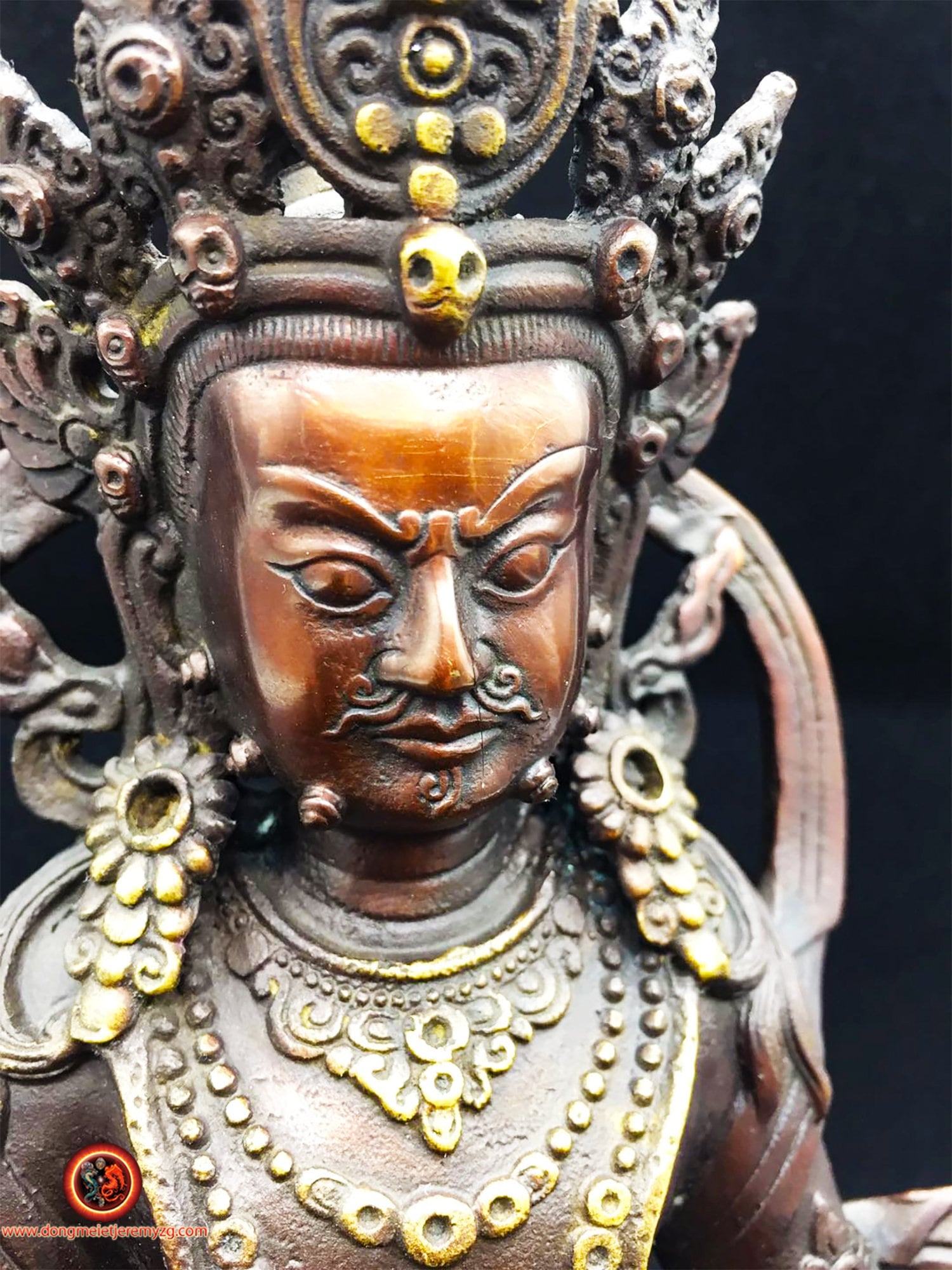 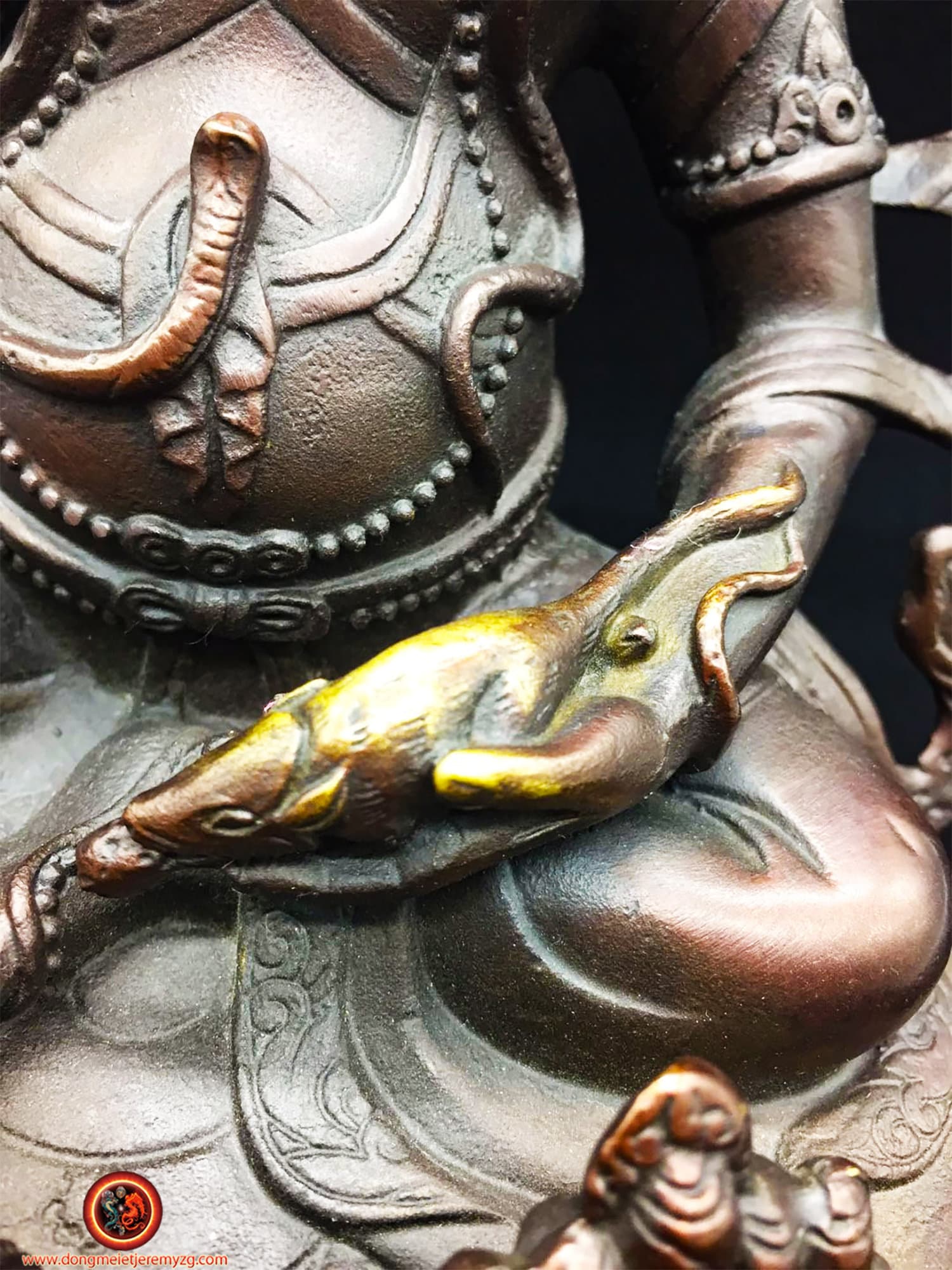 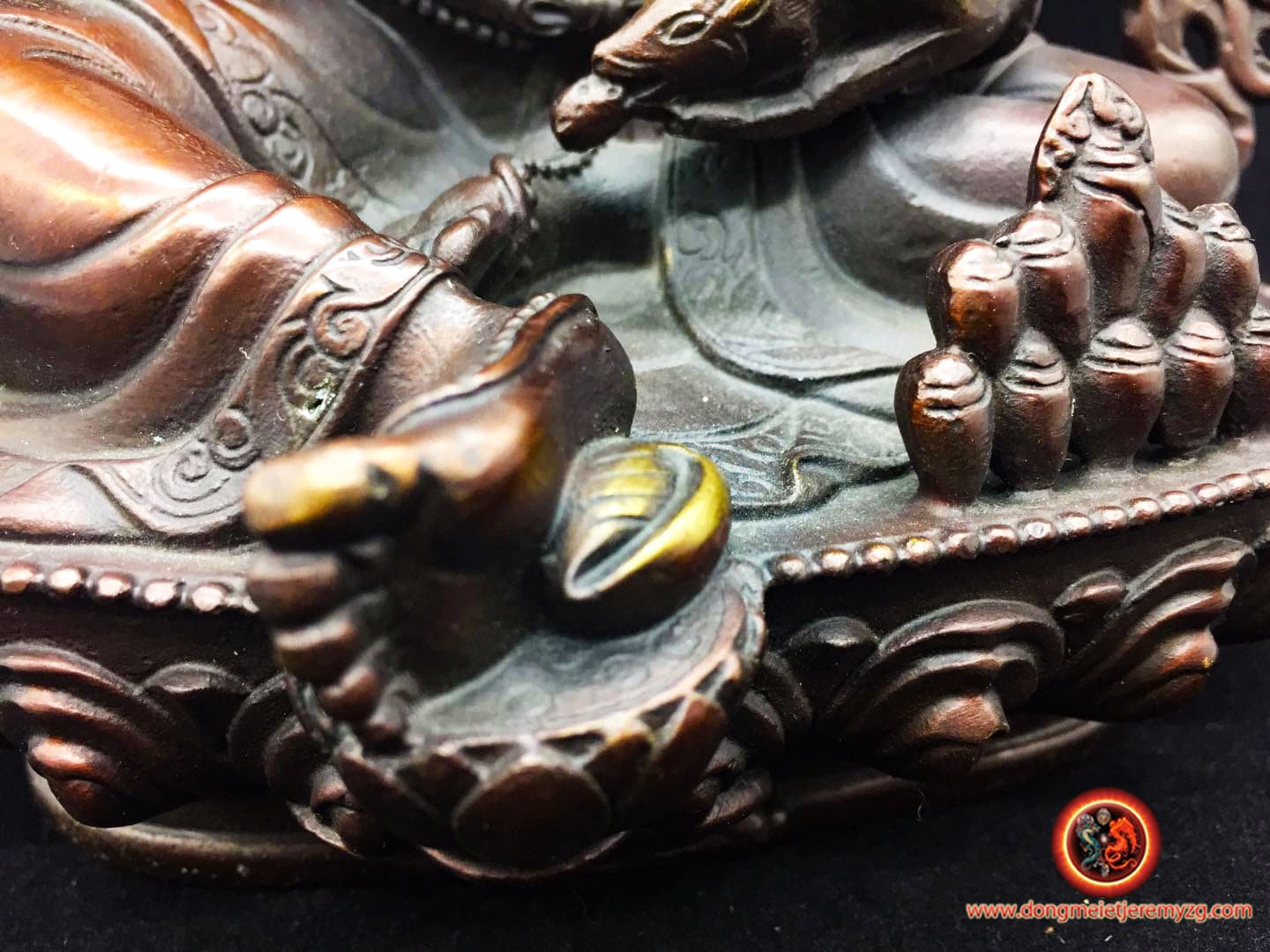 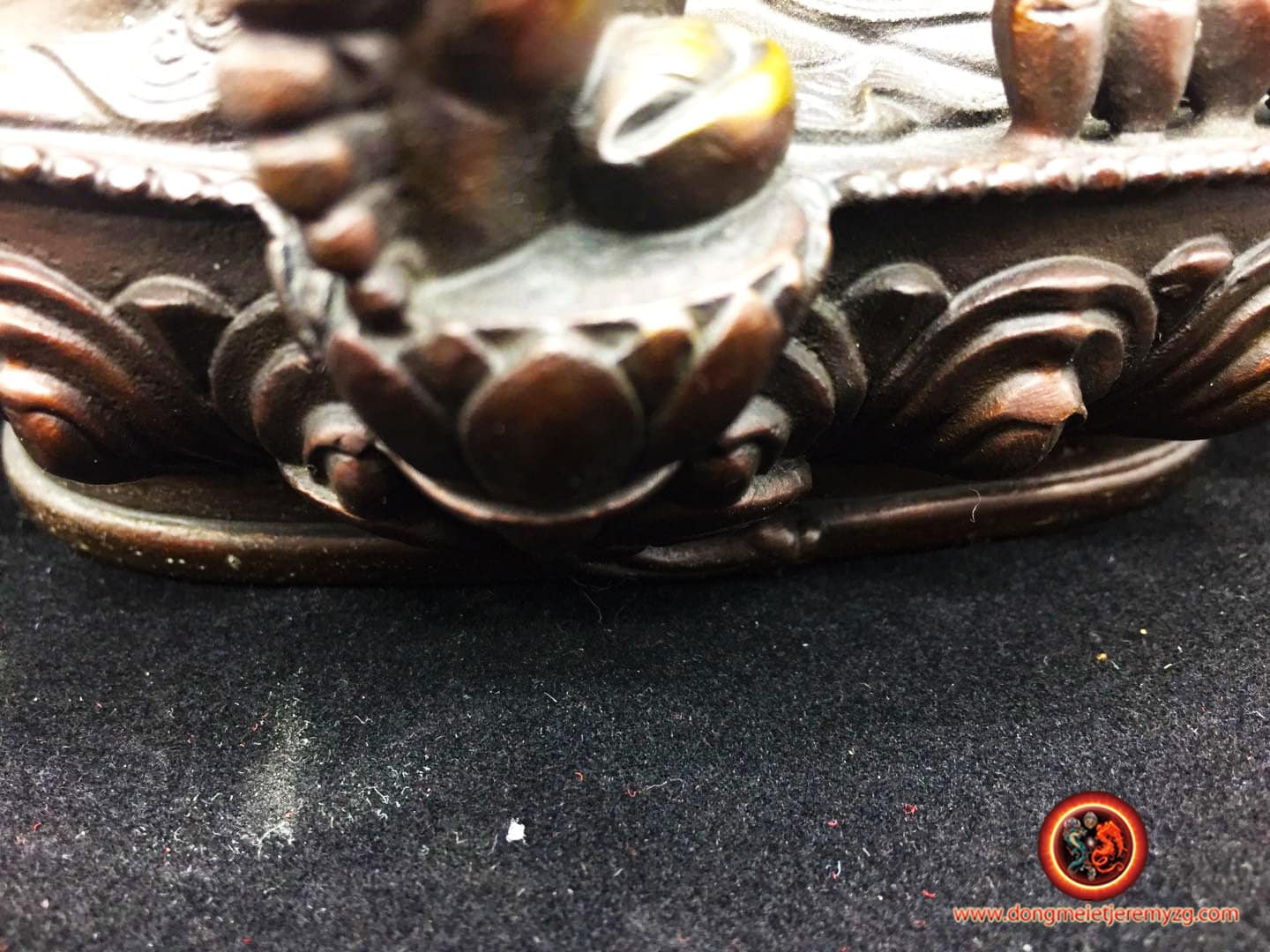 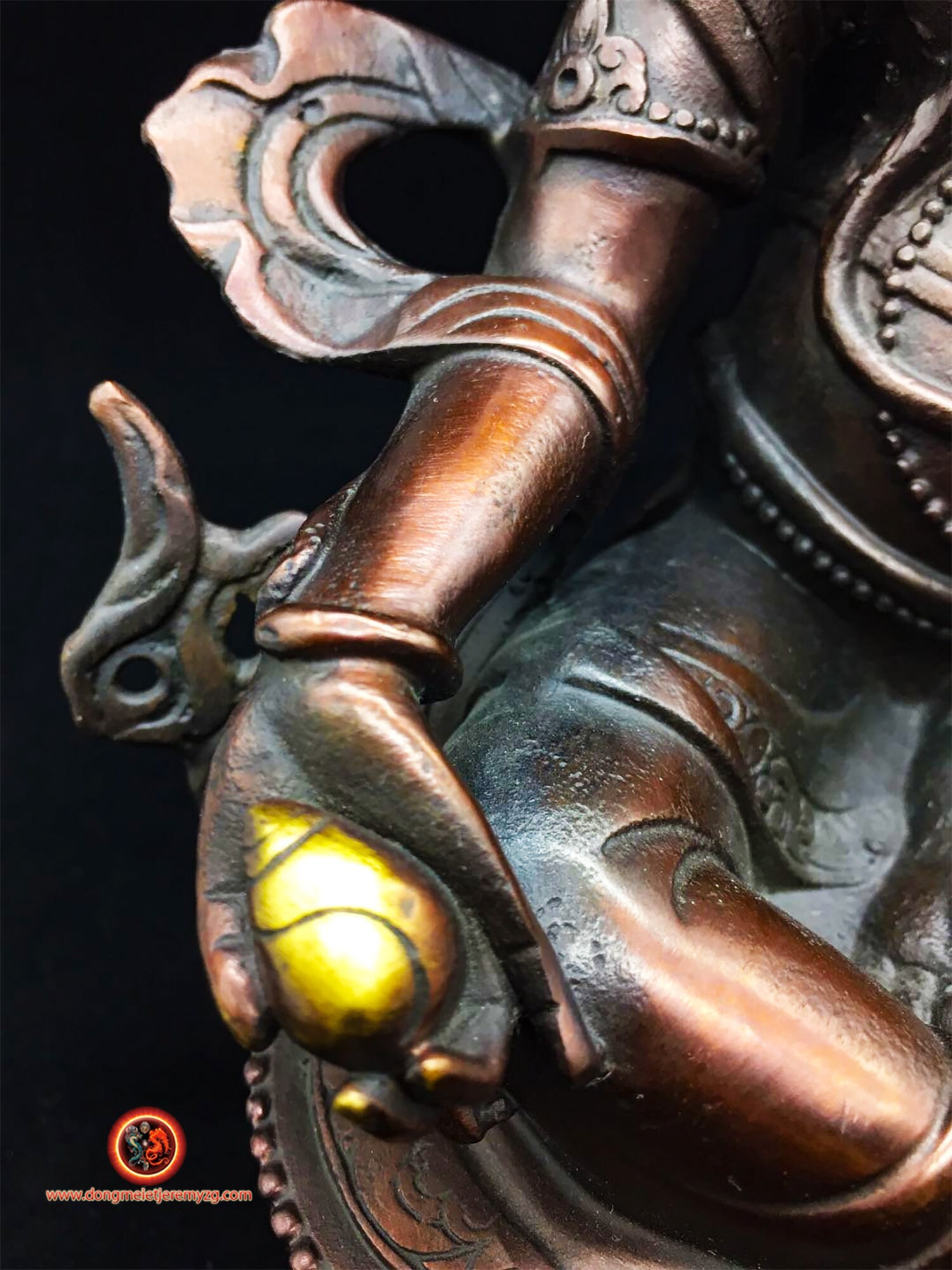 The bronze used is called purple bronze. It is a high quality bronze, holding its characteristic color to a high copper content.


Jambhala (also known as Dzambhala, Dzambala, Zambala or Jambala) is the God of wealth and appropriately a member of the jewel family (Ratna) whose Dhyani Buddha is Ratnasambhava. In Hindu mythology, it is known as Kubera.Jambhala is also considered an offshoot of the Avalokitesvara or Chenrezig, Bodhisattva of Compassion.
He is the protector of all lineages and sentient beings of any disease and difficulties. Jambhala is a Bodhisattva of material and spiritual wealth as well as many other things, including the granting of financial stability.
"Because in this world there are all kinds of angry and negative emotions or evil spirits, and sometimes they harm you and other sentient beings, Dzambhala must assume such a wrathful and powerful form to protect us from these harmful spirits and negative karma. In particular, Dzambhala helps us minimize or reduce all misfortunes and obstacles and helps us to increase all good fortune and happiness. »
This statuette is the yellow version of the deity (green, white, red and black) also known as the Guardian of the North Vai-ravaa वैश्रवण (sansk.)
(Pali. Vessavaa वेस्सवण) (Chin.多聞, duo wén erwong) (Cor. 다문천왕, Damun Cheonwang) (Jap. 多聞 or 毘沙門 Tamon-ten or Bishamon-ten) (tib. rnam.thos.sras (Namth-se)) (mong. Bisman tengri). Taoist name Molishou.
The guardian of the north is also the leader of the Chaturmaharaja (or Celtic kings) "the one who is learned", "the one who hears everything". In China it is considered a Buddhism of the Bhramaic deity of the Kuvera riches, the north being considered to contain fabulous treasures. It presides over winter and is black in color, nicknamed the black warrior. He commands an army of Yakshas.
In India its symbols are the flag, the jewel and the mongoose.
In Japan his cult appears independently of the other guardian kings from the 9th century, he was considered the healing god who would have saved Emperor Daigo (898-930), he became god of riches in the Heian era, then protector of the samurai at the time Kamakura.
Like Milofo, he has been one of the seven bohemian gods since the 17th century. He is the protector of the nation in both China and Japan.