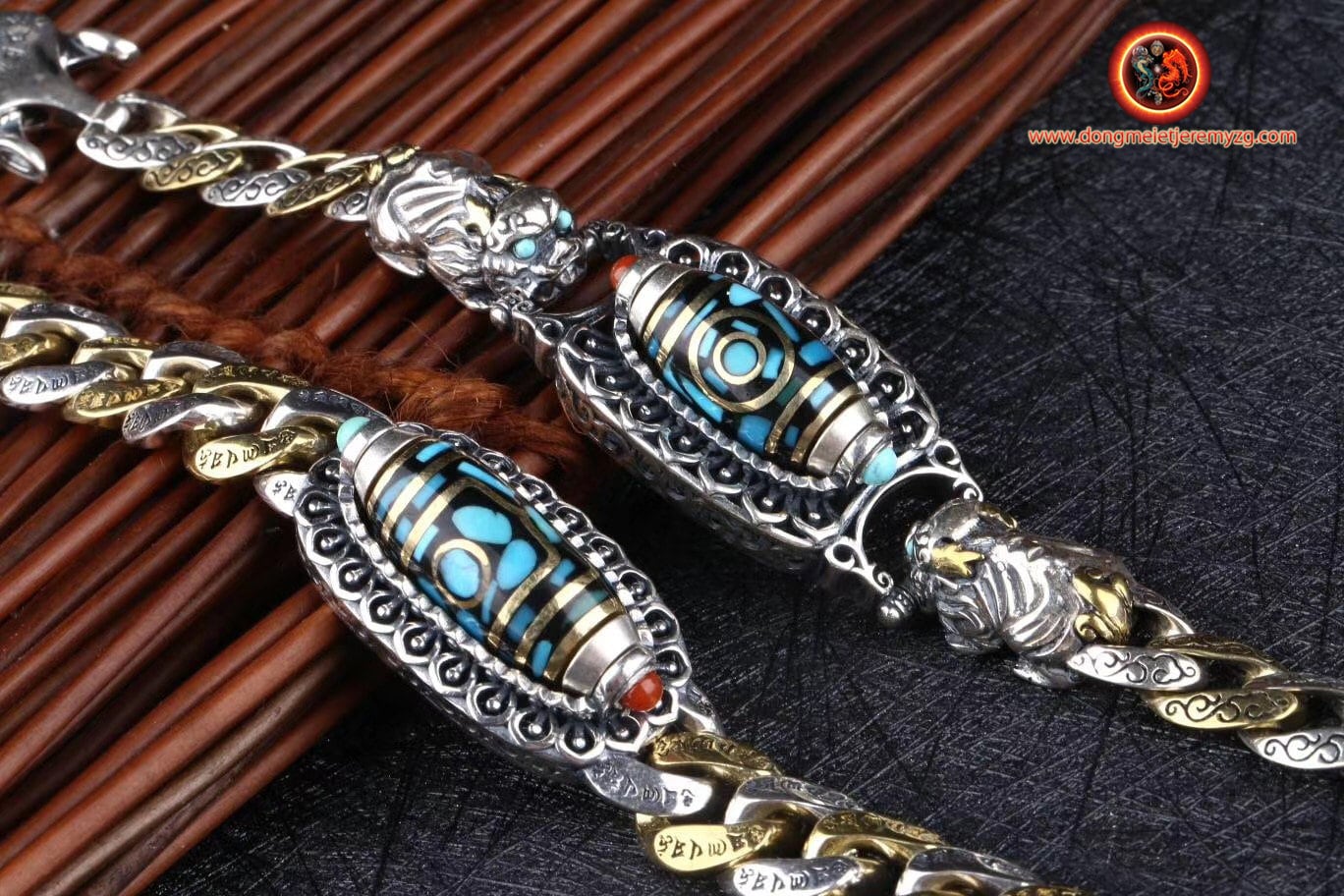 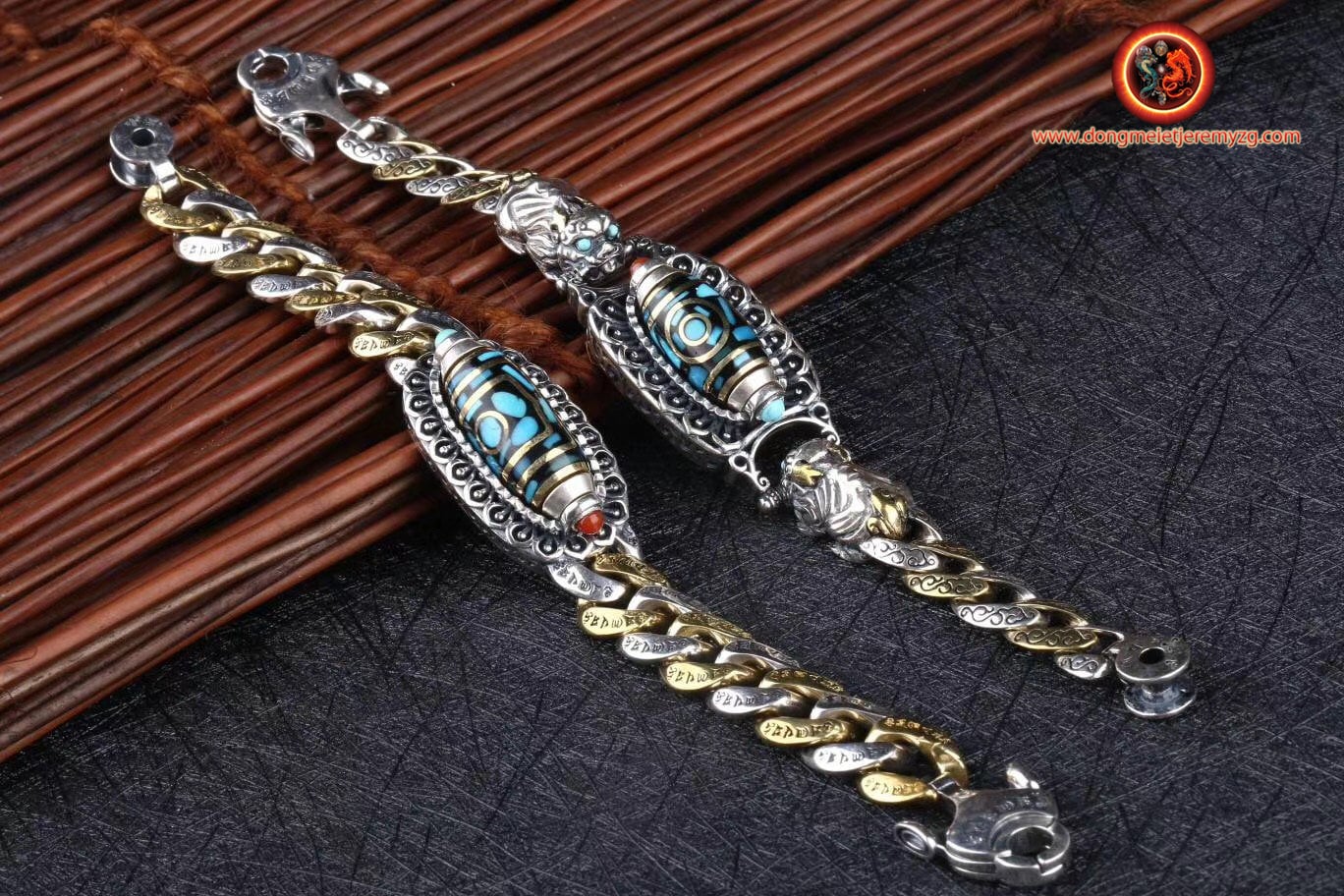 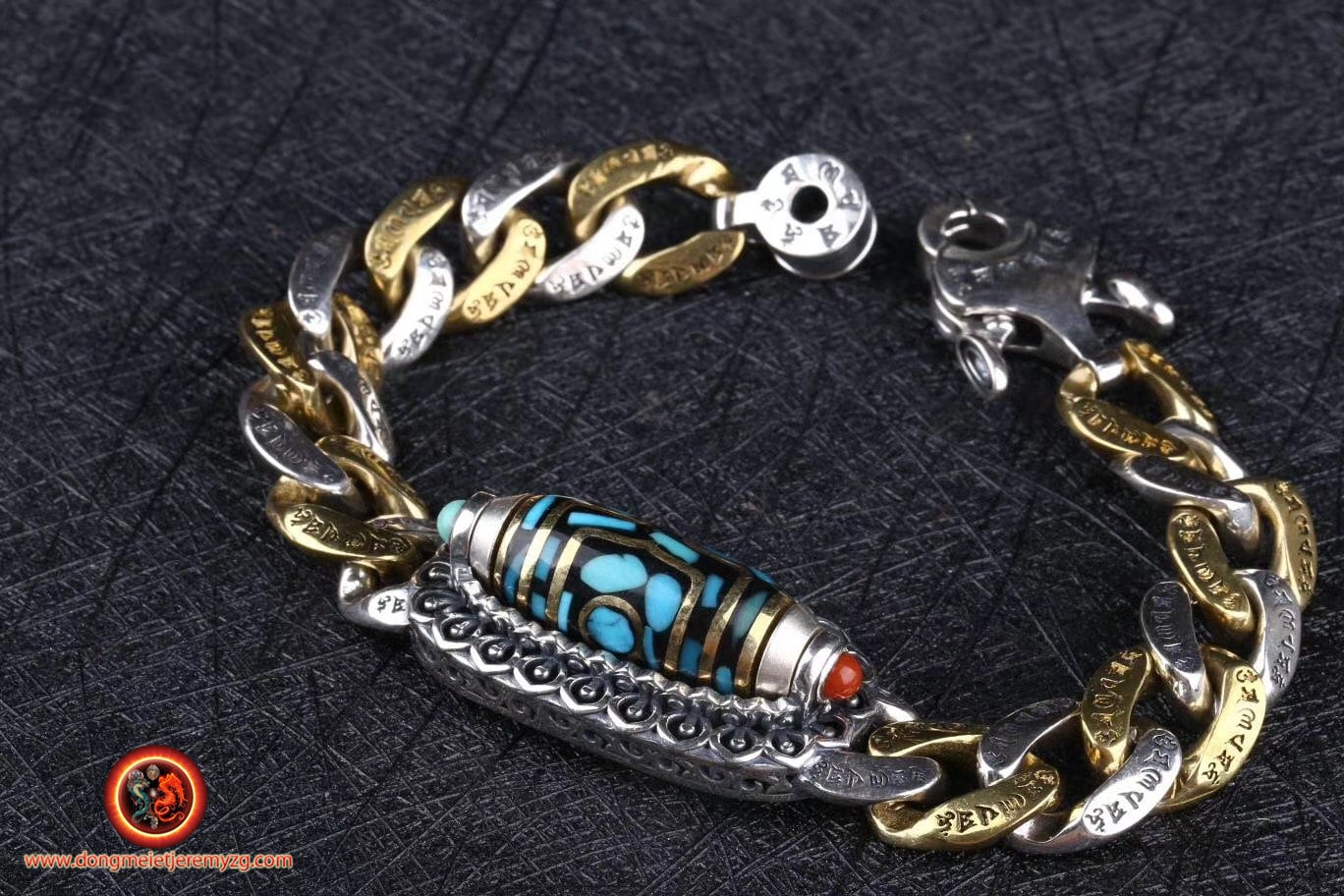 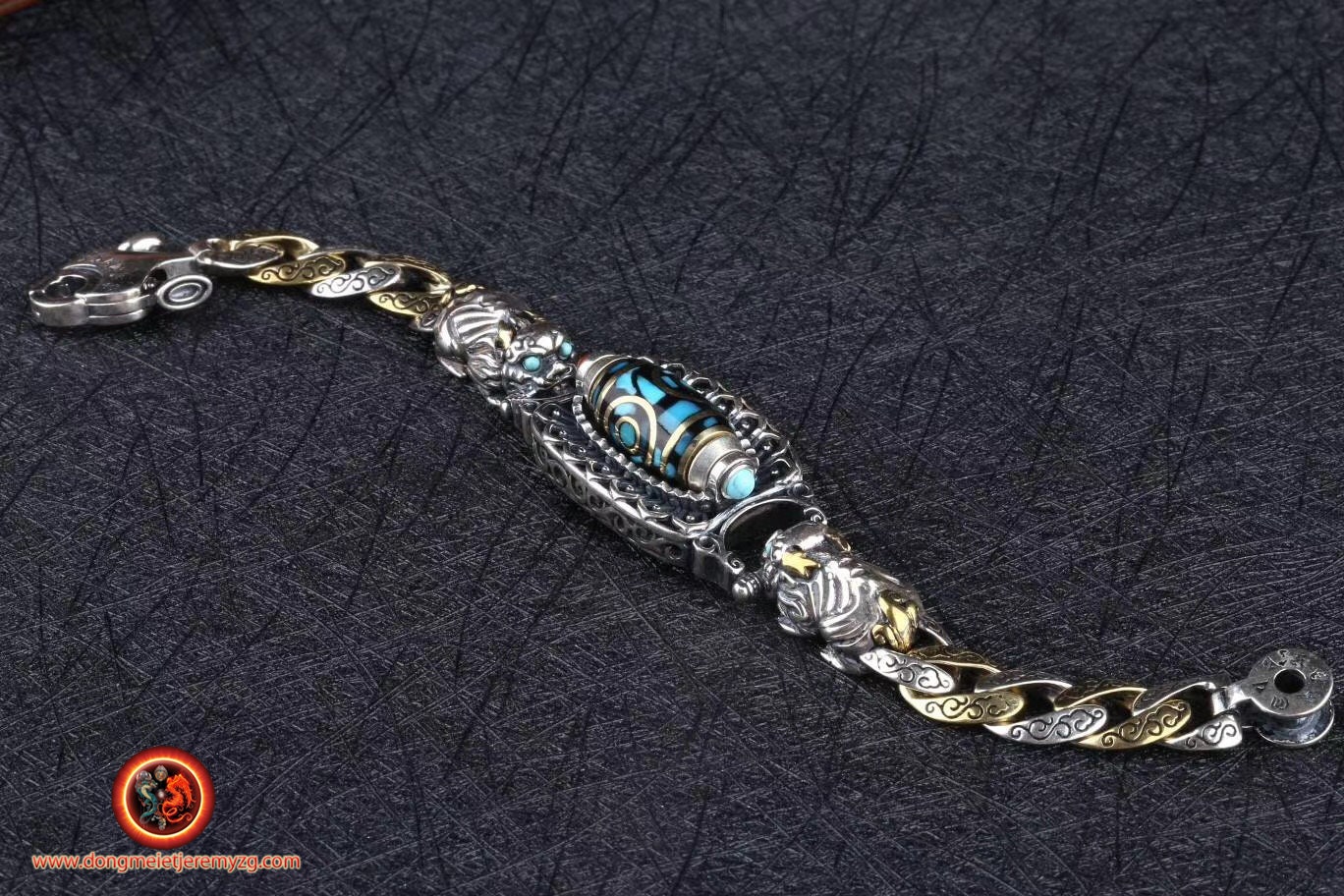 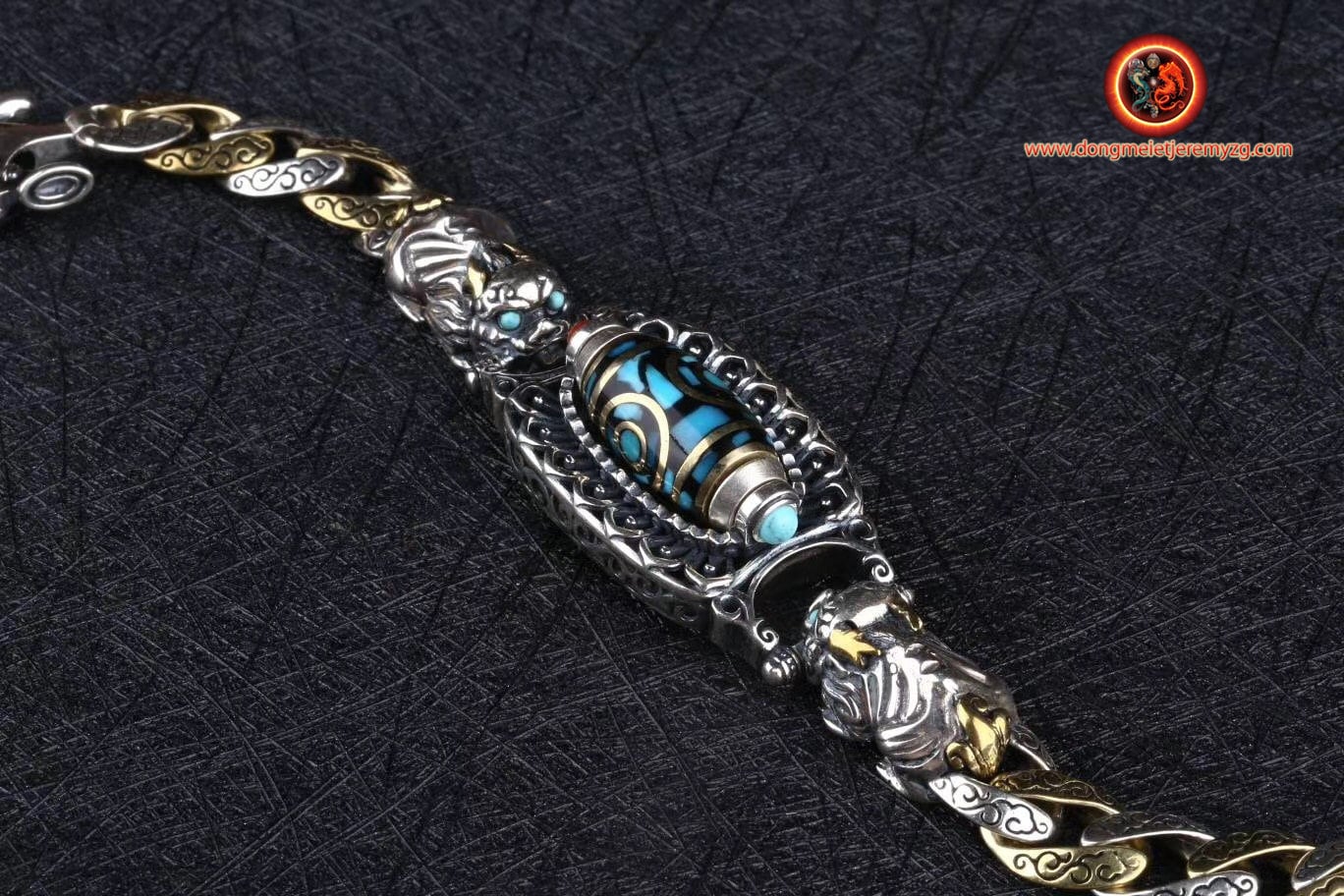 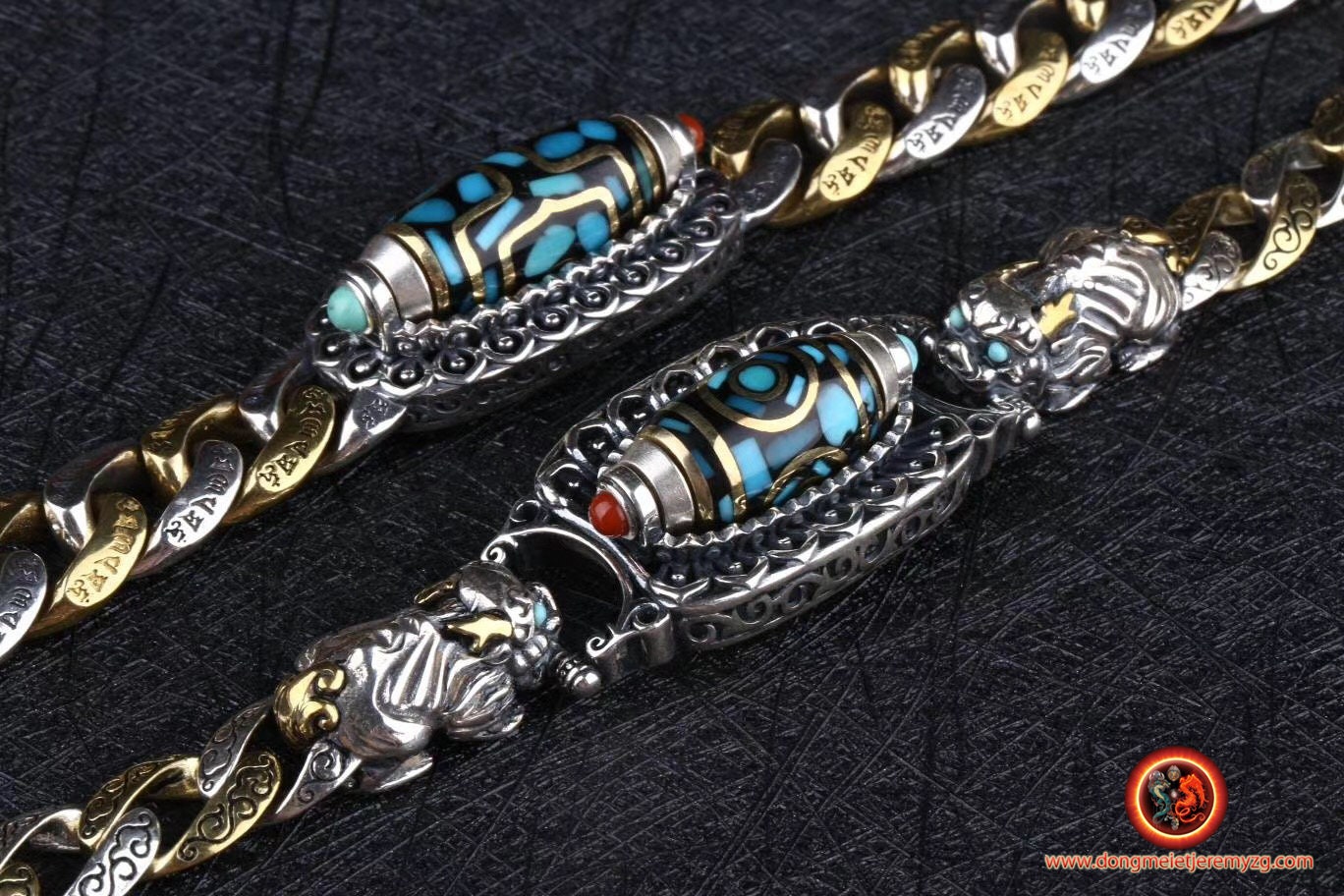 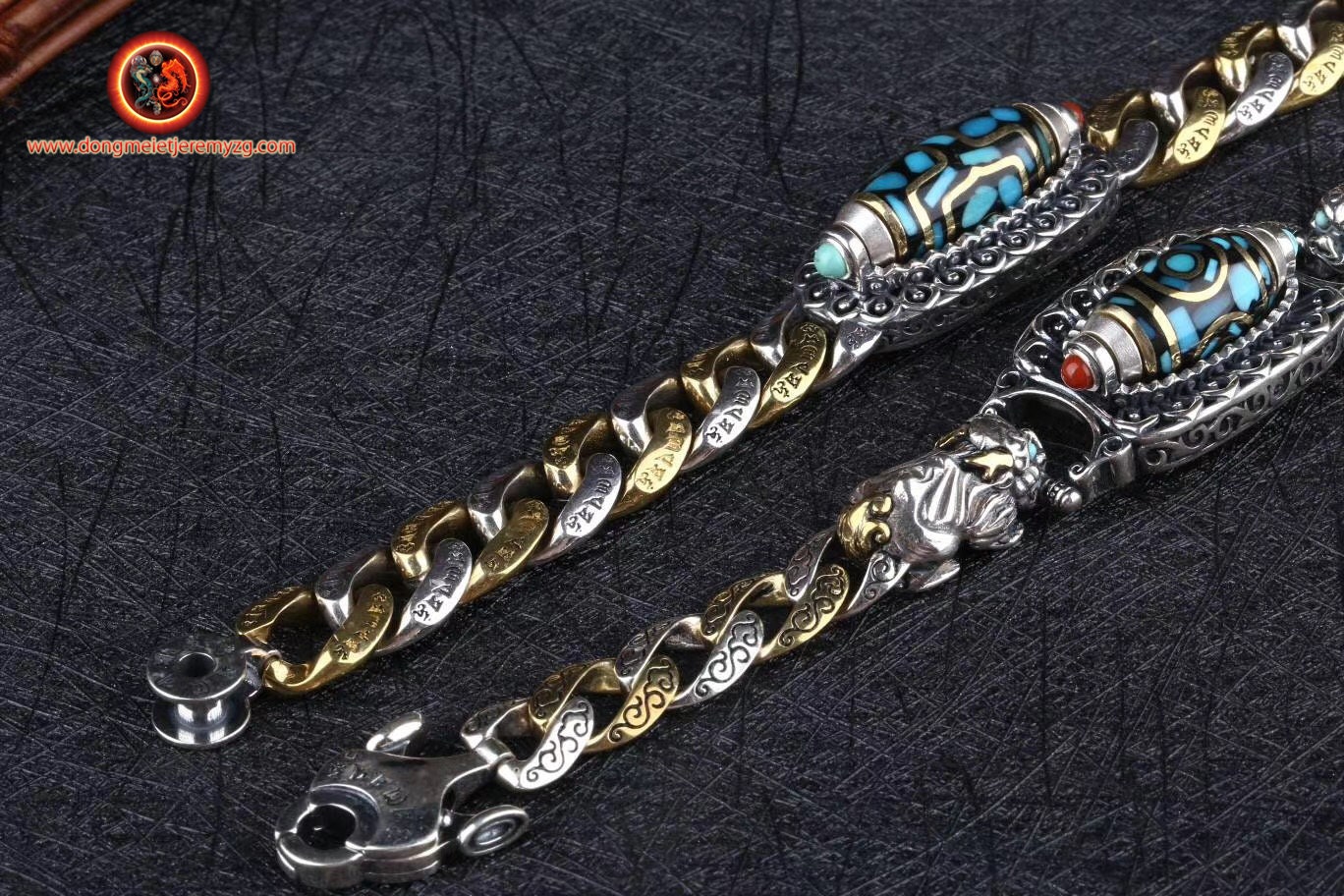 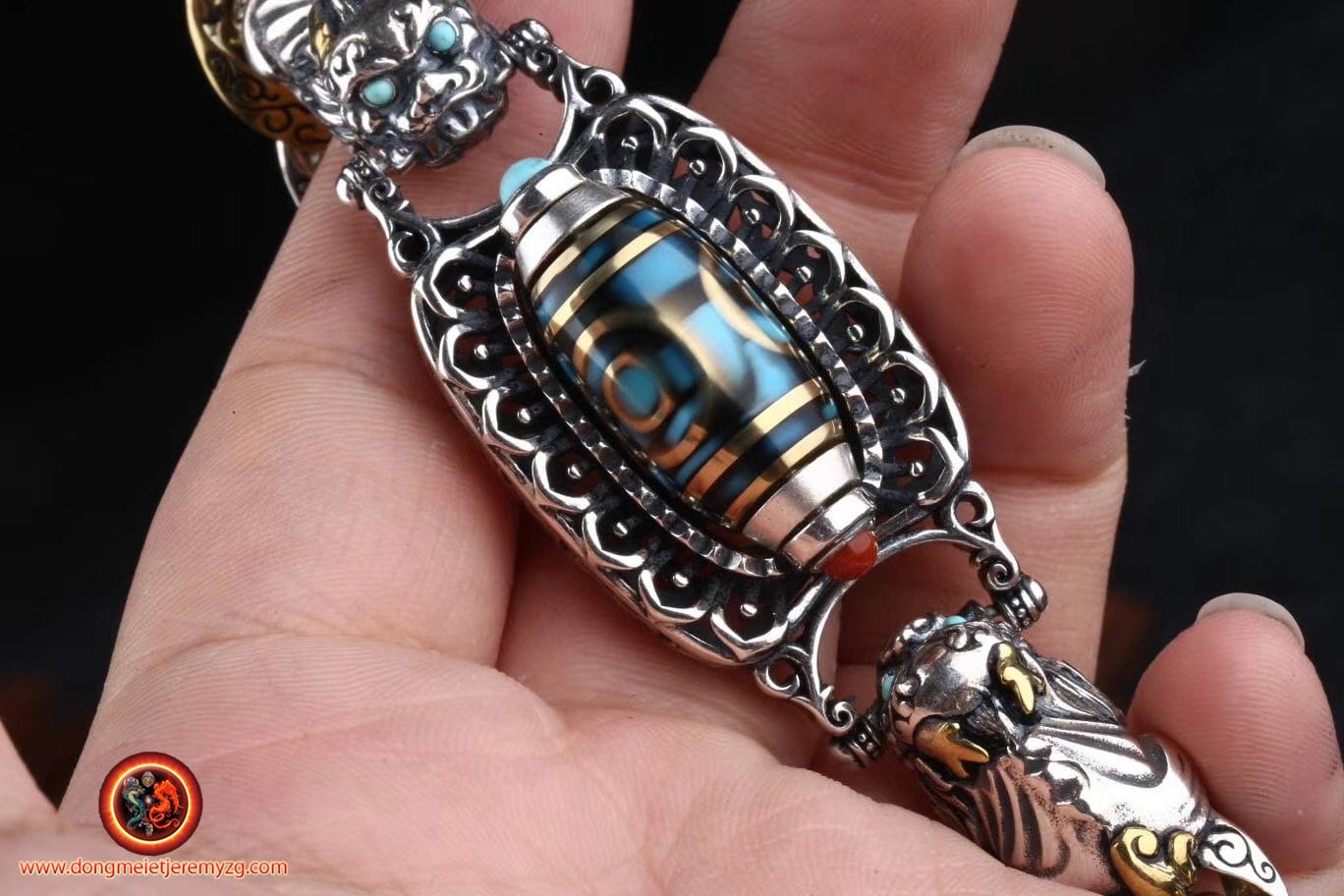 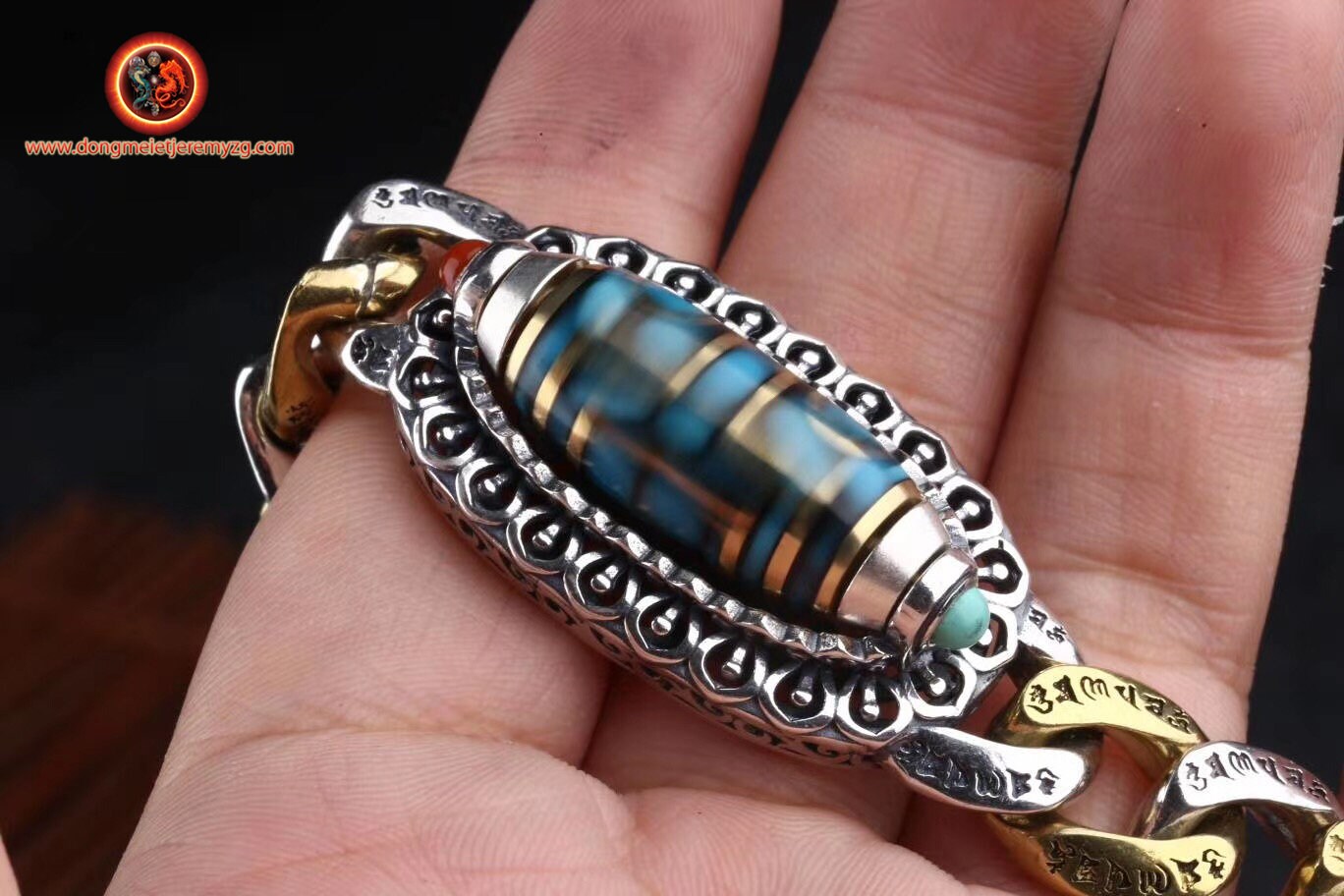 Length of 21 cm. Different lengths available, contact us by message.
Two models available with or without pixiu.
The Dzi is rotating thanks to a high precision ball bearing developed in Germany

Available video of the new collection of bracelets thanks to this link
https://www.facebook.com/dongmeietjeremyzhangguelle/videos/592048631512425/

Three-eyed DZI. The 3-eyed Dzi represents the three stars of luck, happiness, honor and longevity. This is the manifesto of the Hindu god of wealth, the Kubera. This 3-eyed pearl creates the right conditions to enjoy fortune, happiness and prosperity.

Dzi are considered by Tibetans to be powerful protections. According to legend, these stones are not of earthly origin, but, shaped by the gods and sown on earth so that whoever finds them, have a better Karma.


The Dzi are also mentioned in some ancient Buddhist texts because some malas intended for the advanced practices of Vajrayana must be made in Dzi Dzi Dzi dating back 4,500 years were found in Tibet during archaeological excavations, thus in the middle of the shamanism period of Ben long before the arrival of Buddhism.

Pixiu one of the 5 best known animals in Chinese mythology. It was born on the 18th day of the second lunar month, an extremely symbolic date in Asia. This is the ninth child of the celestial dragon of the emperor jade The ninth son of the dragon borrows the massive and powerful allure of the lion. His body is surmounted by a dragon's head. And it adorns itself with a pair of wings, for good measure. Today, the pixiu 貔貅, or pi xiu or pi yao - male or female - a single horn remains. Whereas in the past, the female wore two horns to distinguish her from the male, who wore only one. An air of strength and ferocity emerges from the set, accentuated by the clearly exposed fangs. It is that the pixiu is a heavenly guardian, charged with preventing the intrusion of demons and evil spirits, he fiercely protects his master. The pixiu is of noble extraction, it feeds on stones and precious metal symbols of its nobility of character. The legend of Pi Xiu or Pi Yao recounts that the latter deliberately disobeyed a heavenly law and that the jade emperor got into a black rage. To teach him the lesson and punish him, he would have condemned him to feed solely on gold and silver. He would then make her disappear the anus in order to prevent him from evacuating everything he ate. He would therefore be obliged to keep his loot in his stomach but could never access it or use it. A horrible punishment when you love money and gold so much! History says that the pixiu attacks demons and evil spirits whose vital essence it turns into riches. It is therefore often used to attract some financial prosperity, hence the gold bars or coins that accompany it. Pixiu is also used to defeat or prevent the evil demons and spirits that cause disease. In traditional feng shui, a metal pixiu is used as a remedy against some delicate qi. It is placed in particular: In the annual sector afflicted by the three killers (san sha, 煞). · The area of Tai Sui (Grand Duke Jupiter, 太歲) or Sui Po in particular if this area is frequently disturbed (for example if the main entrance door is there). It is in relation to this reason that Pi Xiu or Pi Yao is, in Asia, the symbol of conquest and gain.