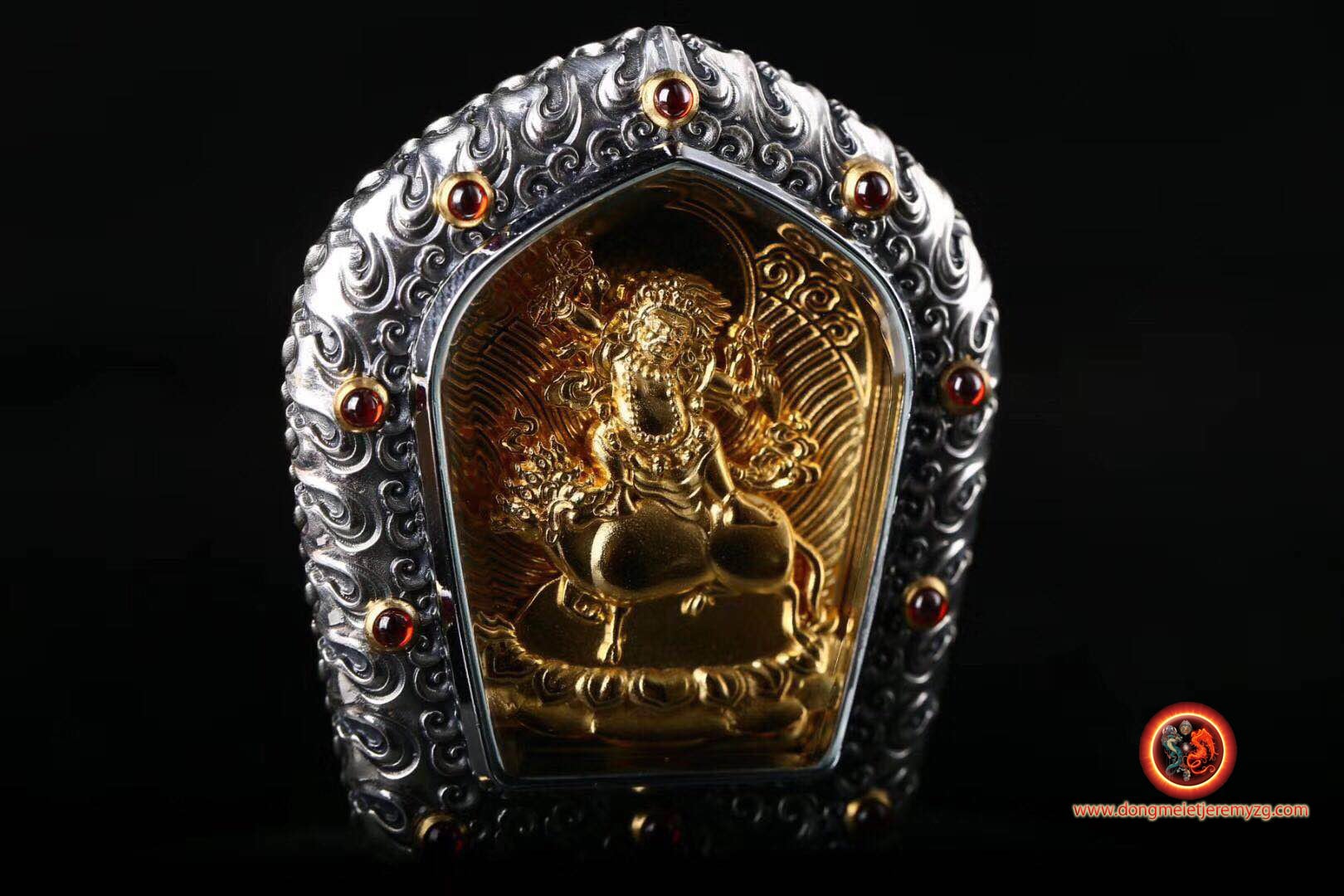 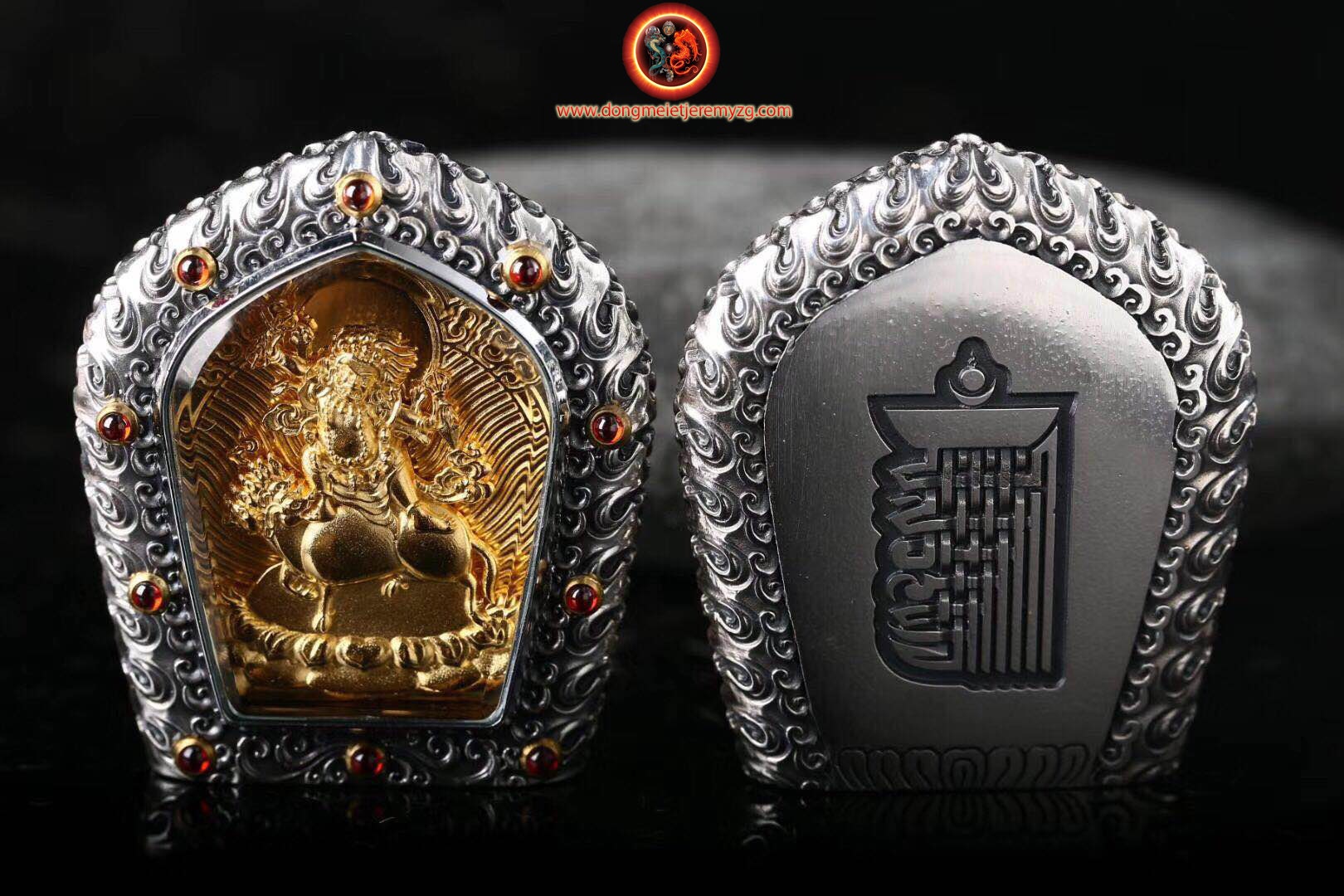 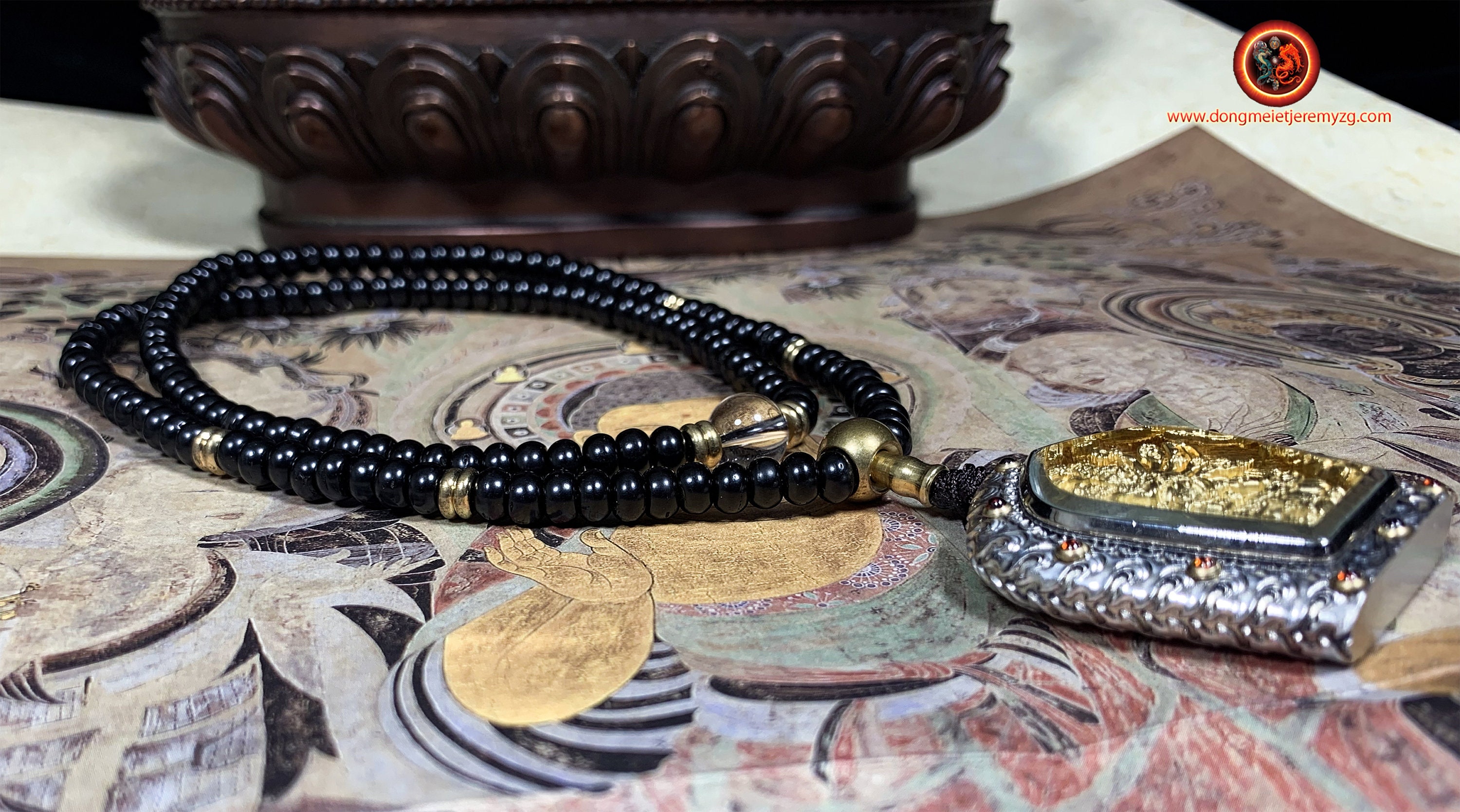 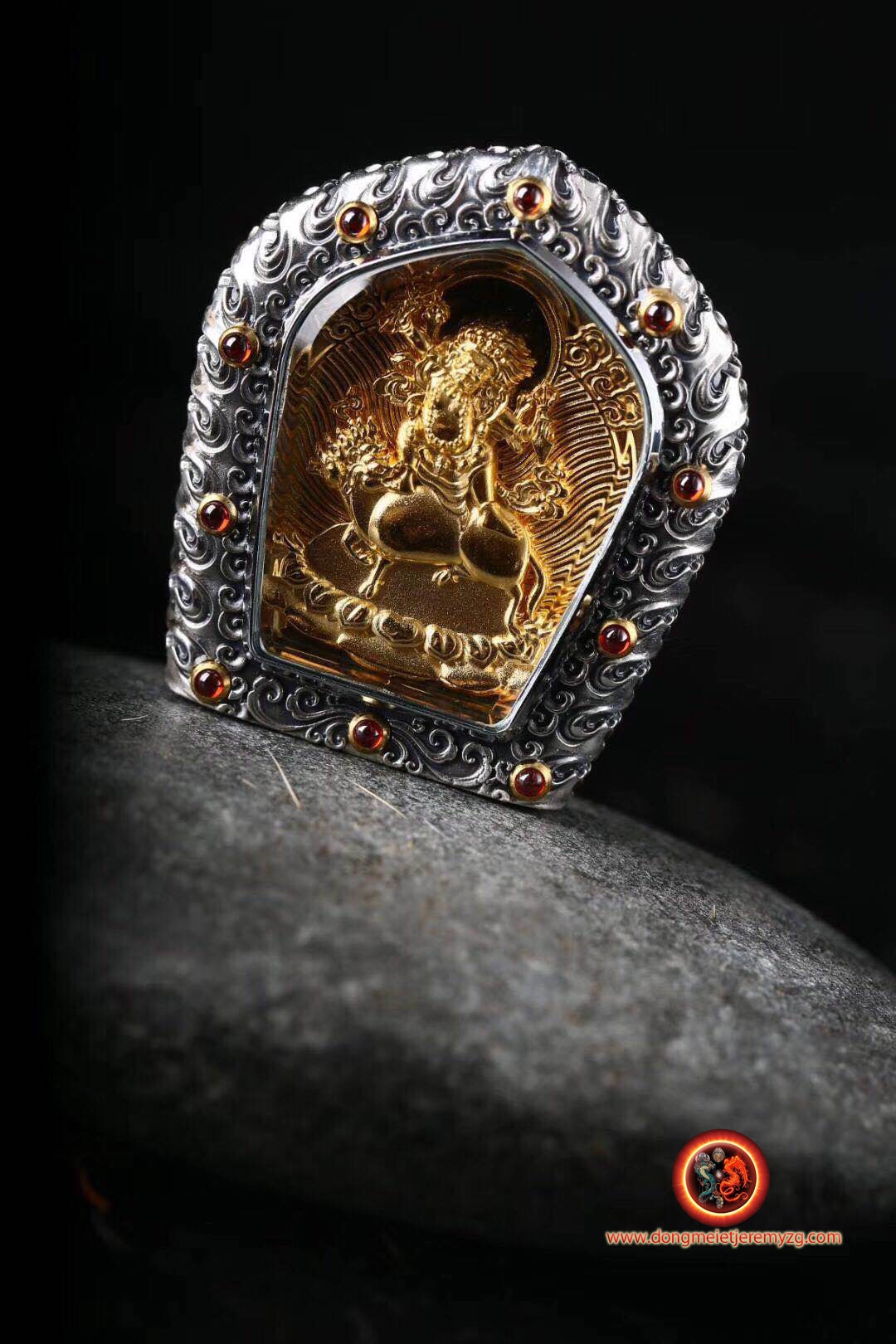 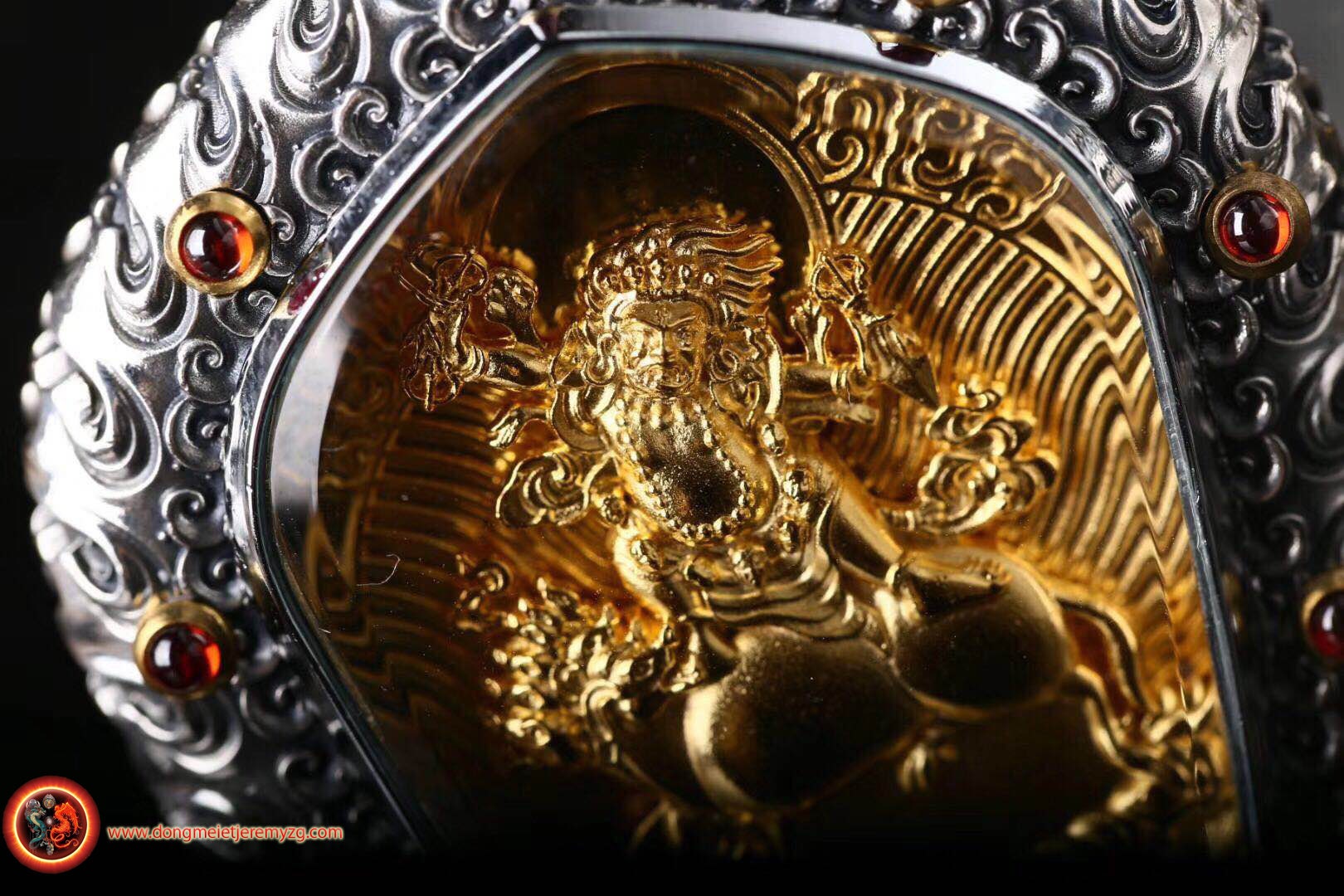 
Karma Guru is an angry form of Padmasambhava, Guru Rinpoche in Tibetan.

Padmasambhava (from Sanskrit, born of the lotus) is an eighth-century Buddhist master, originally from Kashmir or Kabul, and founder of Himalayan Tantric Buddhism. In Bhutan and Tibet, where members of the Nyingma school consider him a second Buddha, he is better known as Guru Rinpoche ("precious master").

Padmasambhava is not only the founder of Buddhism in Tibet, he is also at the origin of the terma tradition or "Spiritual Treasures" transmitted by those who discover them, the Tertöns of the Nyingmapa school. Several times in his teachings Padmasambhava prophesied the coming to Tibet of the Karmapas of the Kagyu school. According to tradition, Padmasambhava appeared on earth incarnated as an 8-year-old child in a lotus flower (hence the Sanskrit name Padmasambhava) floating on Lake Dhanakosha, located in Gandhara near the current border between Afghanistan and Pakistan. Indrabhûti, the king of Oddiyana, would be his father or would have recognized him as heir.

According to tradition, Padmasambhava, had as a fervent disciple an Indian princess, Mandarava. The king his father was furious and decided to burn it; but the ascetic survived safe and sound, and from the pyre emerged a lake which was called Rewalsar or Tsopéma. Object of veneration the place is therefore sacred and attracts pilgrimages. Around the lake, of rather modest dimensions, stand different temples. Accused of the murder of an evil minister, Padmasambhava is banished from the court and then chooses to live - like Shiva - in cemeteries and to bind himself to asceticism and the practice of yoga.
He is also said to have studied in Nallanda in Bihar the teachings of Shantarâkshita. Padmasambhava's ability to memorize and understand esoteric texts after a single listening establishes his reputation as a master among masters.

King Trisong Detsen invited Padmasambhava to come and assist him in Tibet, but the king and guru disagreed. Which of the two was to greet the other first? Padmasambhava made a gesture of greeting at the king's staff, which caused it to break into a hundred pieces. The king immediately raised his hands as a sign of greeting. Padmasambhava uttered a charm by throwing mustard seeds and the space around them burst into flames.
Pe-dkar, who was also called dkor-bdag rgyal-po "King of the Lords of Wealth", the first of the demons, did not tolerate seeing a human with supernatural powers able to compete with his own. So he sent his retinue of thousand demons The'u rank to destroy the guru. Arriving on the spot, they had no chance of killing him because the fire protects him. Defeated, they returned to their master. When Pe-dkar arrived, the fire was still burning. He began to wonder what the cause was. Intrigued by the charms invoked by the guru, he approached to listen. Knowing this, the guru pierced his ear which hears with his magic kila and makes him deaf. He then pierced his eye which saw and made him blind. He pierced his leg and left him disabled. Pe-dkar thus defeated was forced to swear to protect buddha's doctrine forever.