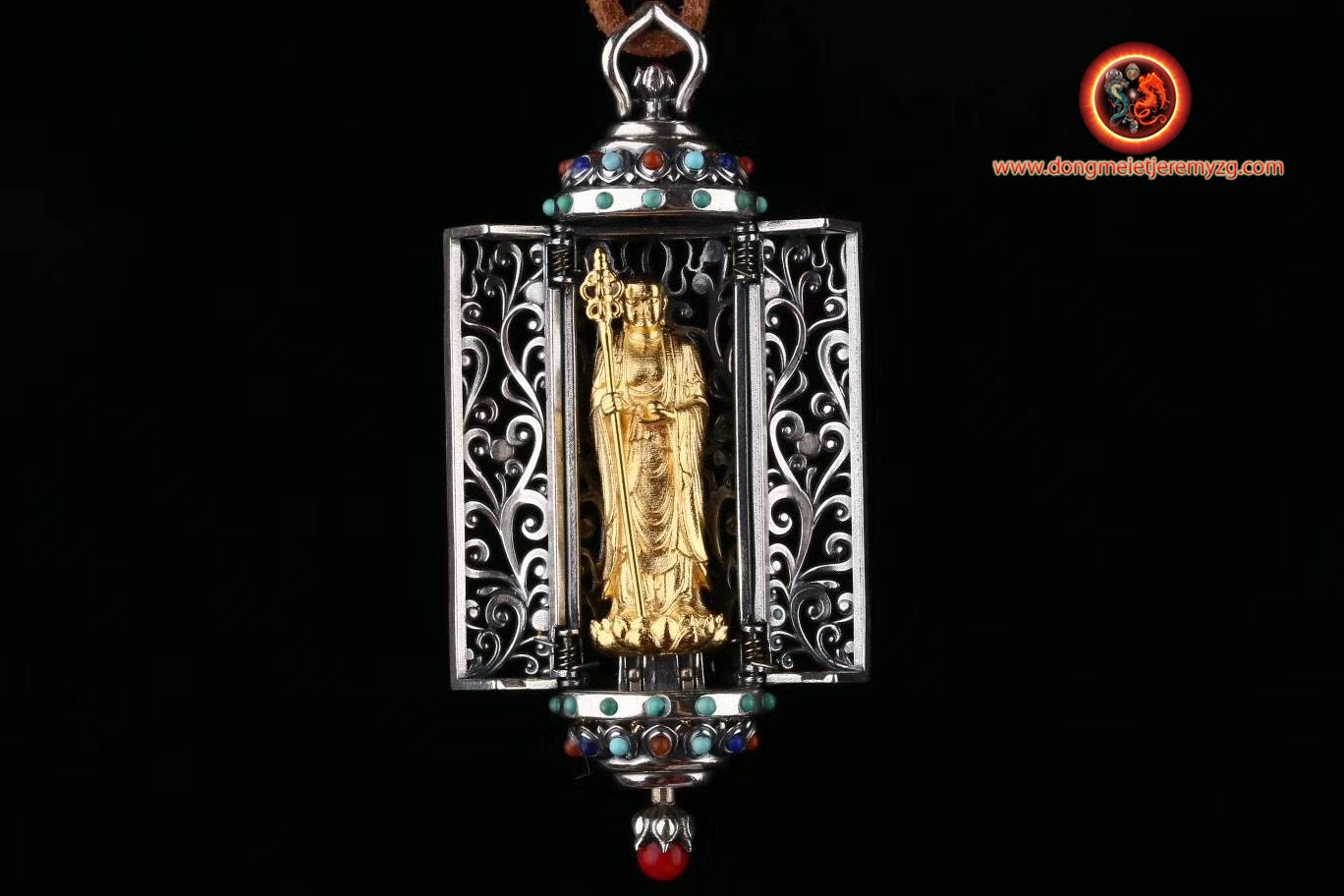 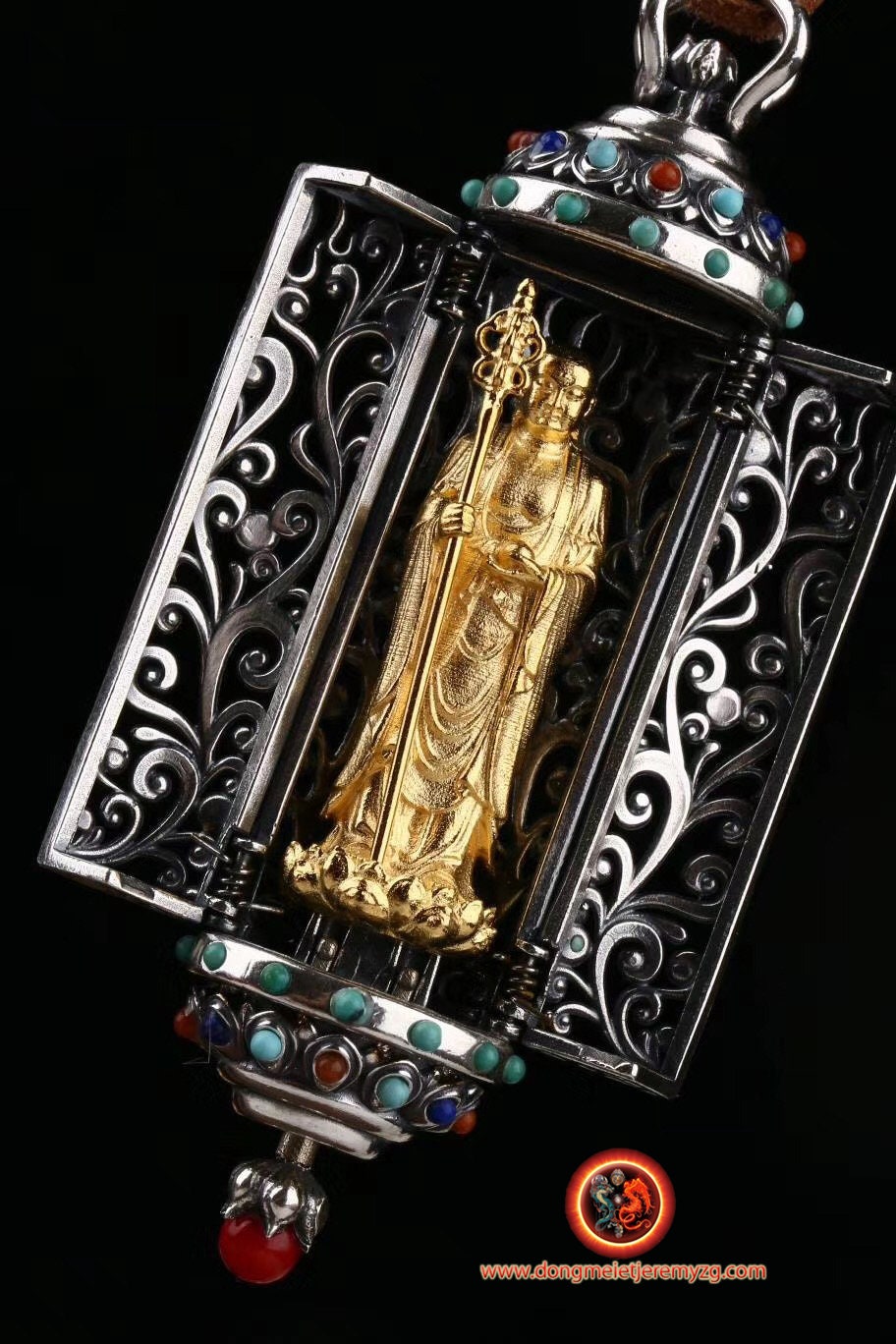 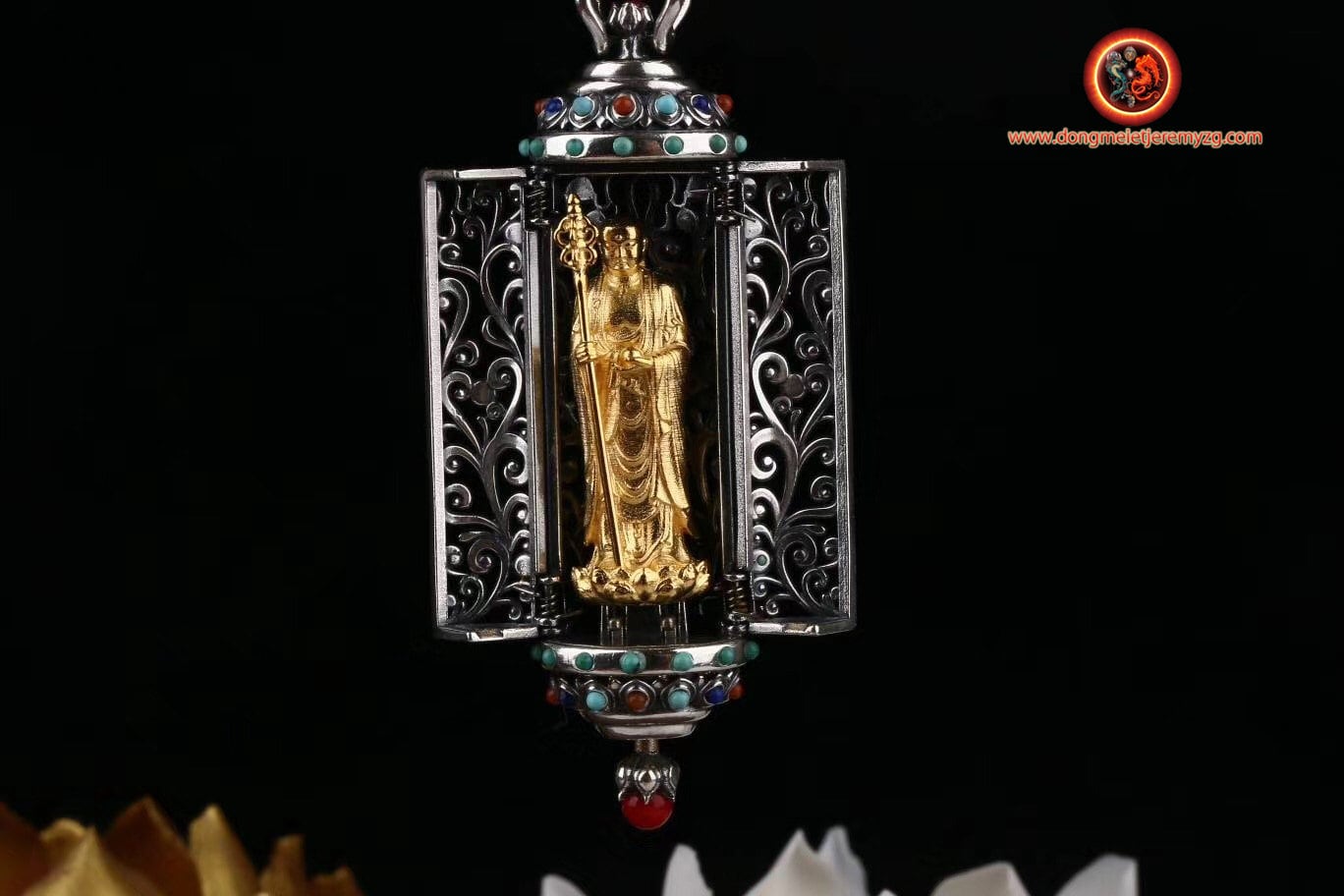 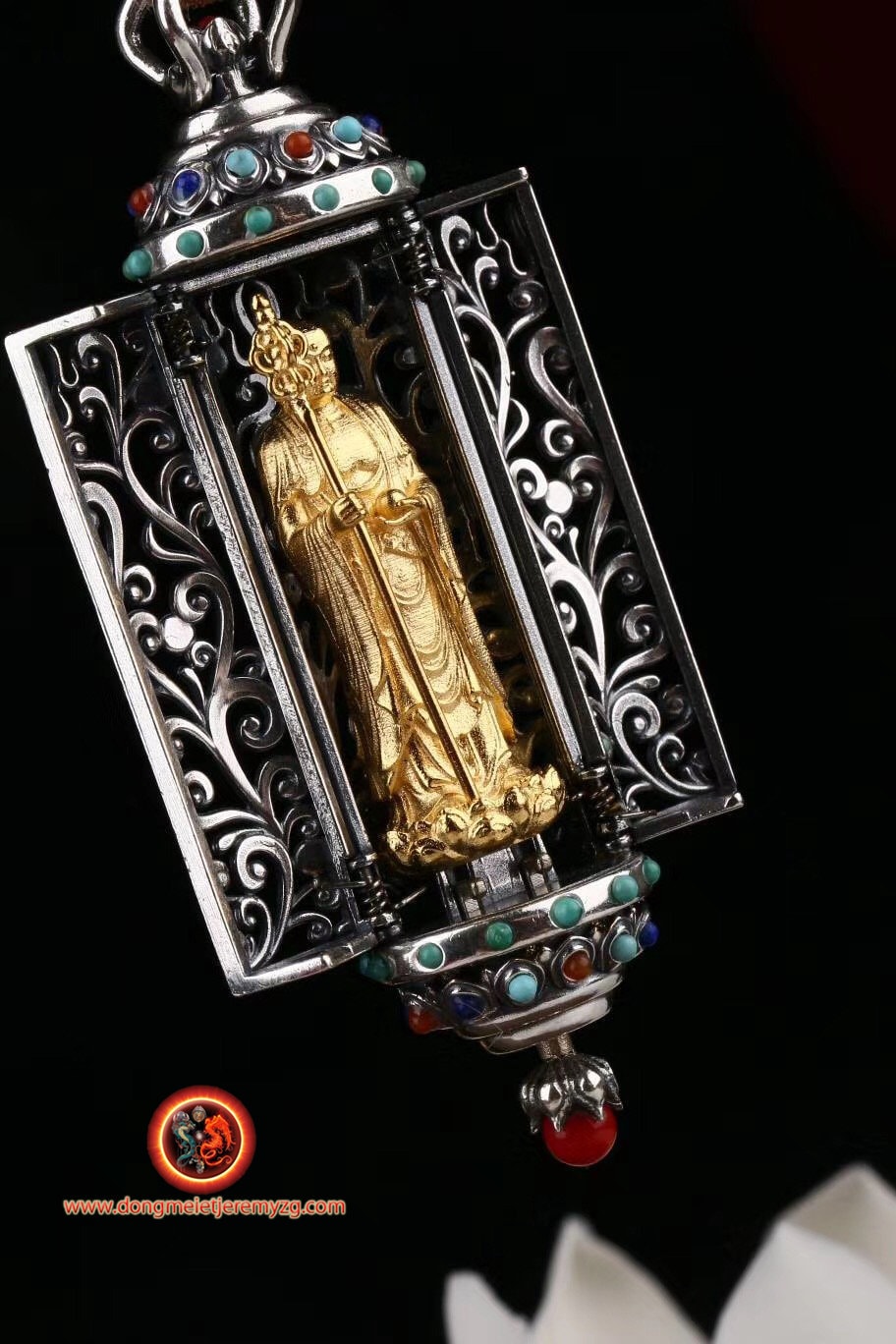 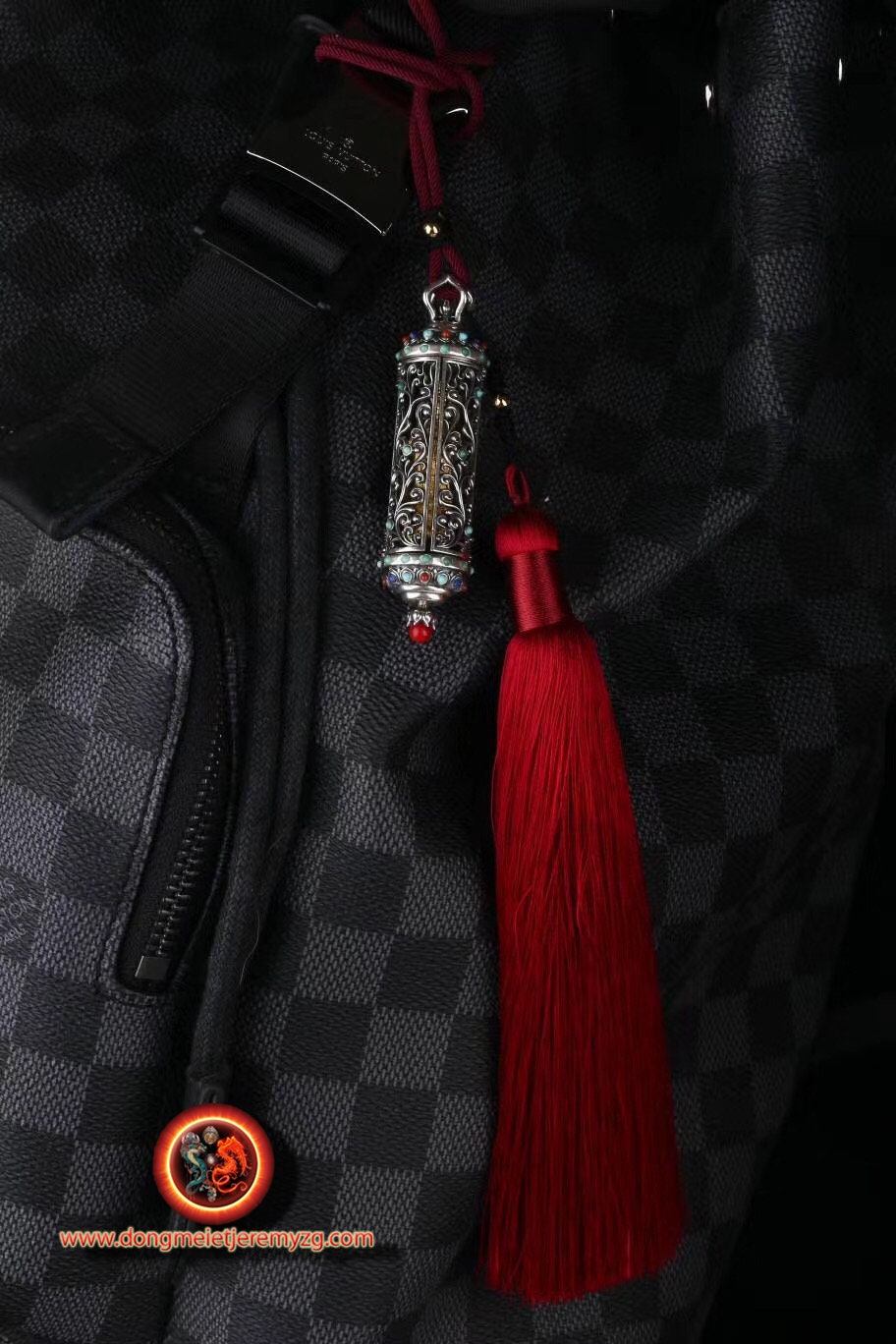 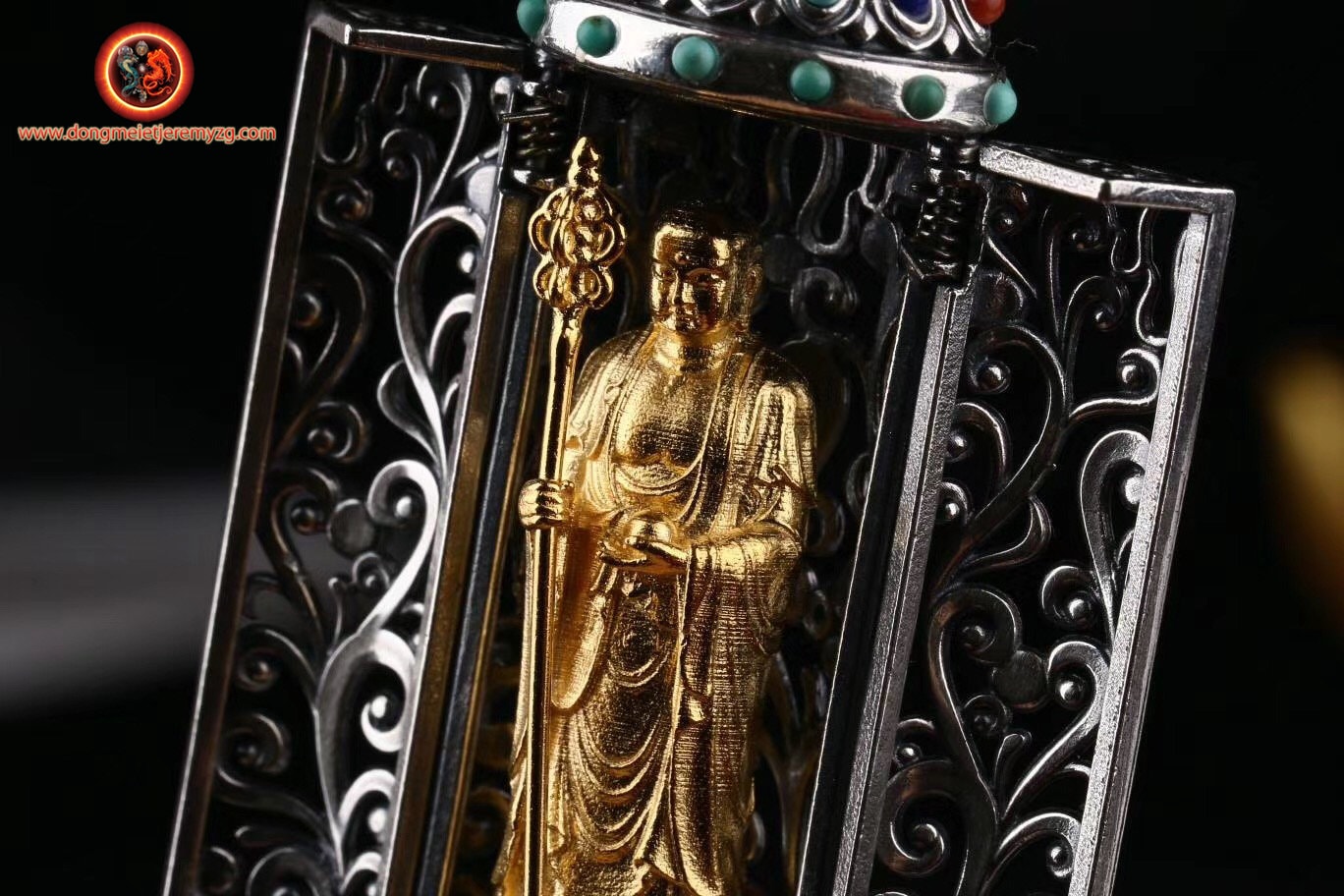 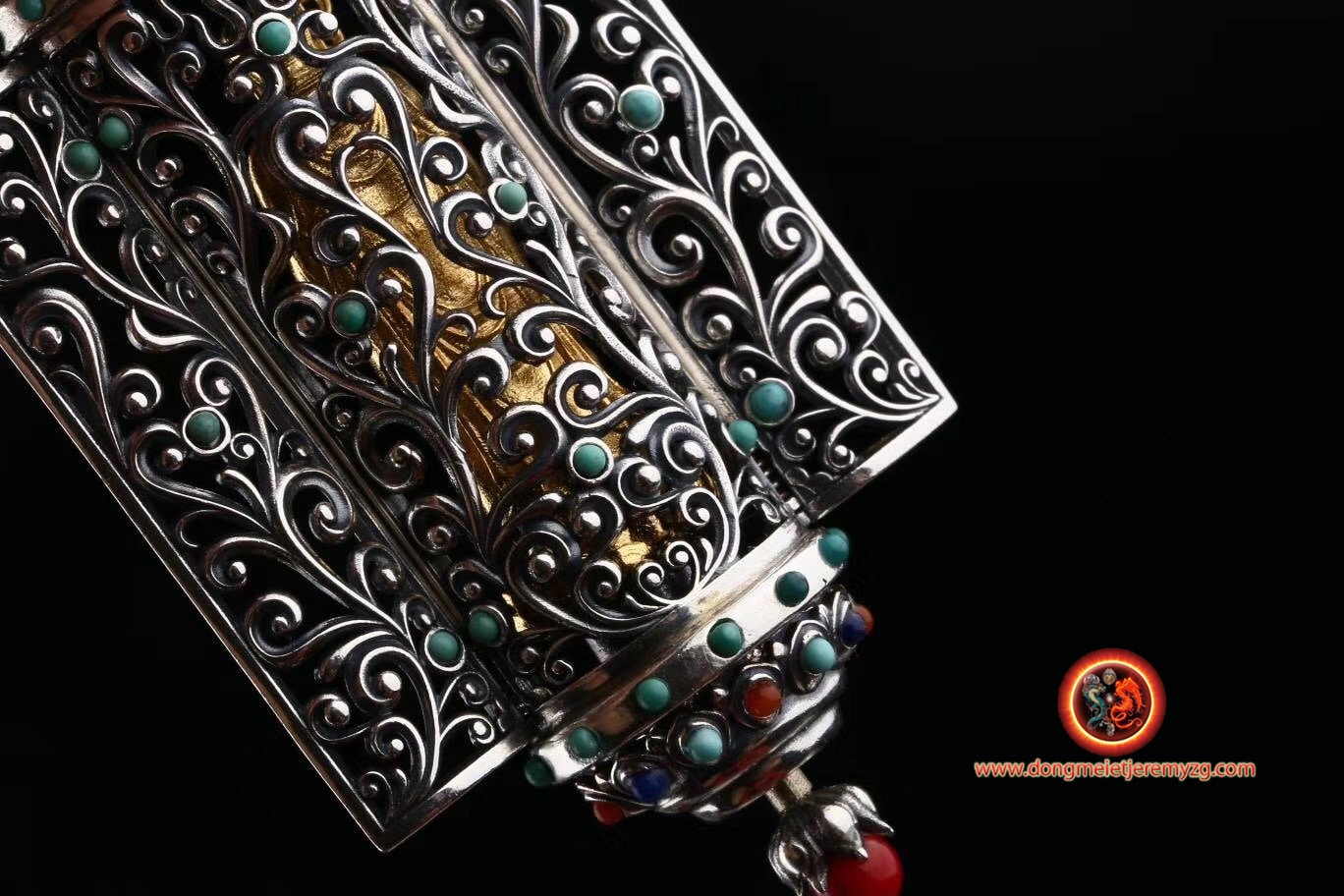 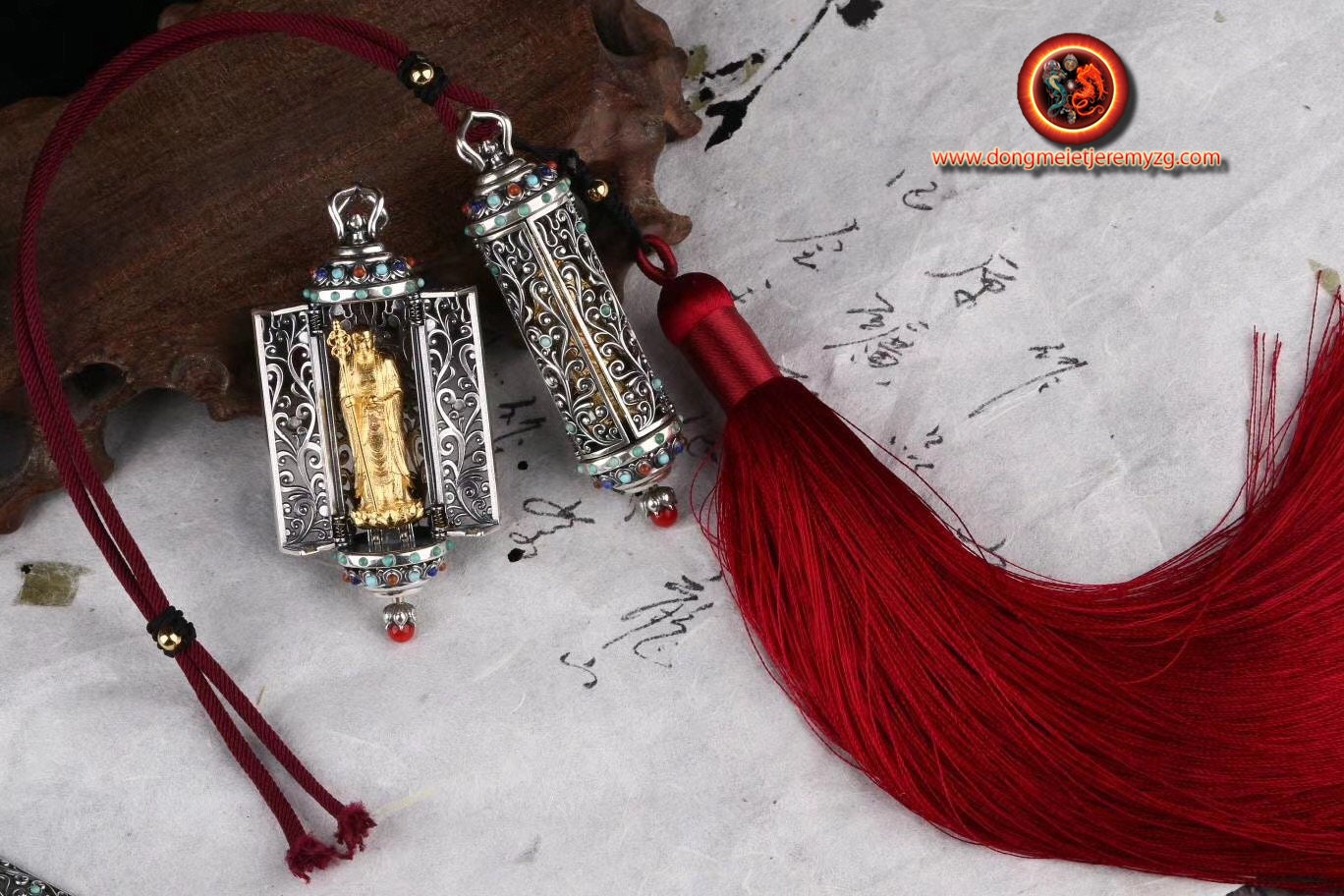 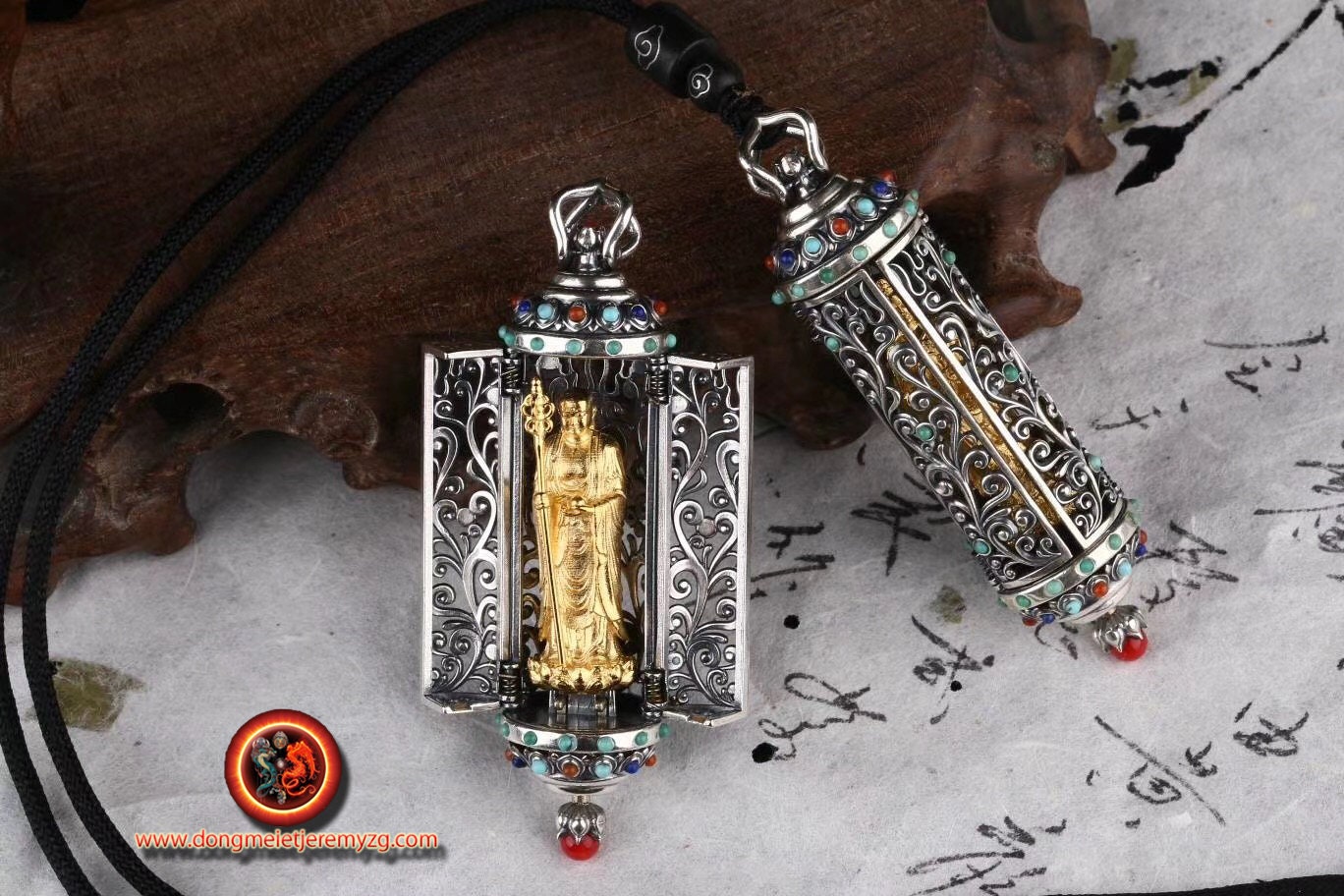 Size of pendant: 70/18mm
Weight of 38 grams.
You can choose a pompom and/or cord or pendant alone.

The pendant is opened by a device allowing the doors to be opened.

Video of the collection available via this link
https://www.facebook.com/dongmeietjeremyzhangguelle/videos/243849483375093/

Kshitigarbha known in China as Dizang Wang or Dizang Pusa藏菩薩), is the savior of the underworld in Buddhism. Its name "Hidden Treasure of the Earth" is the translation of the Sanskrit Ksitigharba, which means "the one that hides the earth".

Under the Tang Dynasty, he was the principal deity of the Sanjie school, which contributed to the multiplication of its representations, seriously ill people are invited to read this sutra and to pray to this bodhisattva to help them recover. There are many legends from this sutra. Shakyamuni Buddha says that whoever recites the name of Koitigarbha a thousand times a day for a thousand days will be protected from accidents and diseases throughout his life by divine beings sent by the bodhisattva.
"OM HA HA HA VISMAYE SVAHA" or "Namo Kshitigarbha bodhisattv-ya!"

Dizang shares with Guanyin the great wish to be present as long as there are men to be rescued, for all the endless "period without Buddha" that will end only with the regenerative coming of Maitreya, the Buddha of the Future.

But if Guanyin deploys his infinite compassion in this world, Dizang extends his action into the afterlife, repatriating his departed faithful in the peaceful living of Nirvana.

His cult has therefore developed mainly in China where he is one of the four great bodhisattvas. Like those of Amituofo and Guan Yin, it is centered around the function of spiritual deliverance that is lent to it. Nevertheless, while the previous two are interested in the six categories of creatures indiscriminately, Dizangwang's specialty is the help of the souls of hell.

Like Amitabha and Avalokiteshvara, Dizangwang made a vow to deliver the souls from hell. This tradition is reported in the Sutra of Dizangwang's vow. The arrival of Ksitigarbha is announced by Shakyamuni Buddha in Paradise Trayastrimsa as a mark of gratitude to his mother Maya. The Buddha explains that Ksitigarbha was once a young Brahmin whose mother had often shown ungodliness; she had then resolved to save her with offerings and prayers; on this occasion she had seen hell and vowed to become a Buddha (or bodhisattva) to deliver all its inhabitants.

Two Japanese Jizos of childlike appearance wearing the red bibs offered by grieving mothers. According to the sutra, the Buddha entrusted Ksitigarbha with the task of watching after him over the "world without Buddha" while waiting for the arrival of the boudha of the future, Maitreya. This text had familiar resonances for the Chinese: millennialism announcing the loss of the transmission of the dharma until the arrival of the future Buddha; importance of filial piety.

In some temples, photos of the deceased or tablets bearing the names of the deceased are placed around his portrait or statue to save them. In Japan, Jiza is especially solicited by women who have had a miscarriage or aborted, and placed at crossroads and cemeteries to free wandering spirits.
This Bodhisattva and his Sutra are of great importance and are the subject of great veneration in East Asia in the Buddhism of the Great Vehicle

In Japan, Jizo is especially sought after by women who have had a miscarriage or aborted, and placed at crossroads because these places particularly attract ghosts and other demons.

Apart from helping troubled souls, he occasionally acts as a purveyor of wealth by virtue of the pearl he holds on tantric representations and his name, which sometimes appears on lottery tickets, in Hong Kong for example.