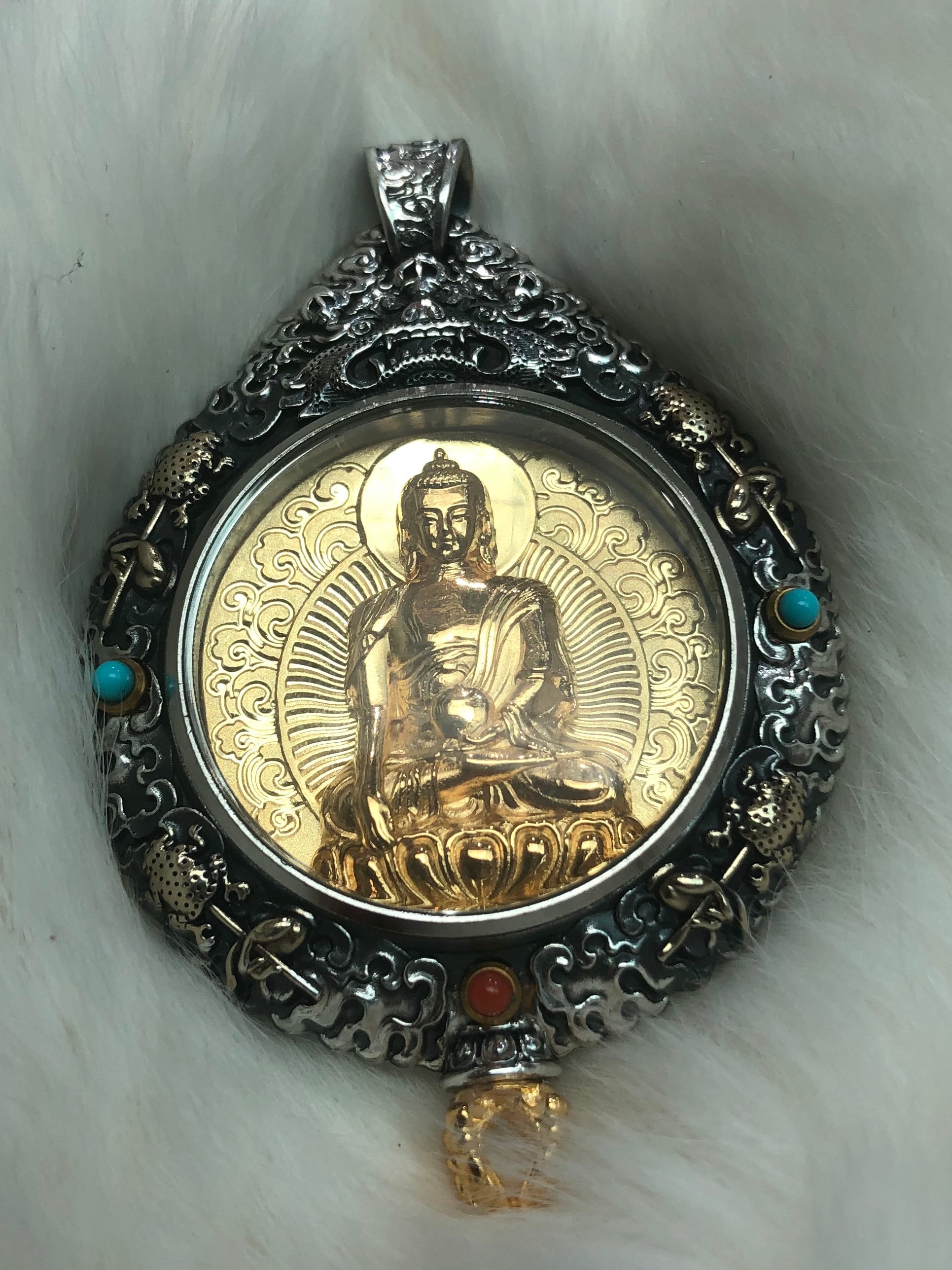 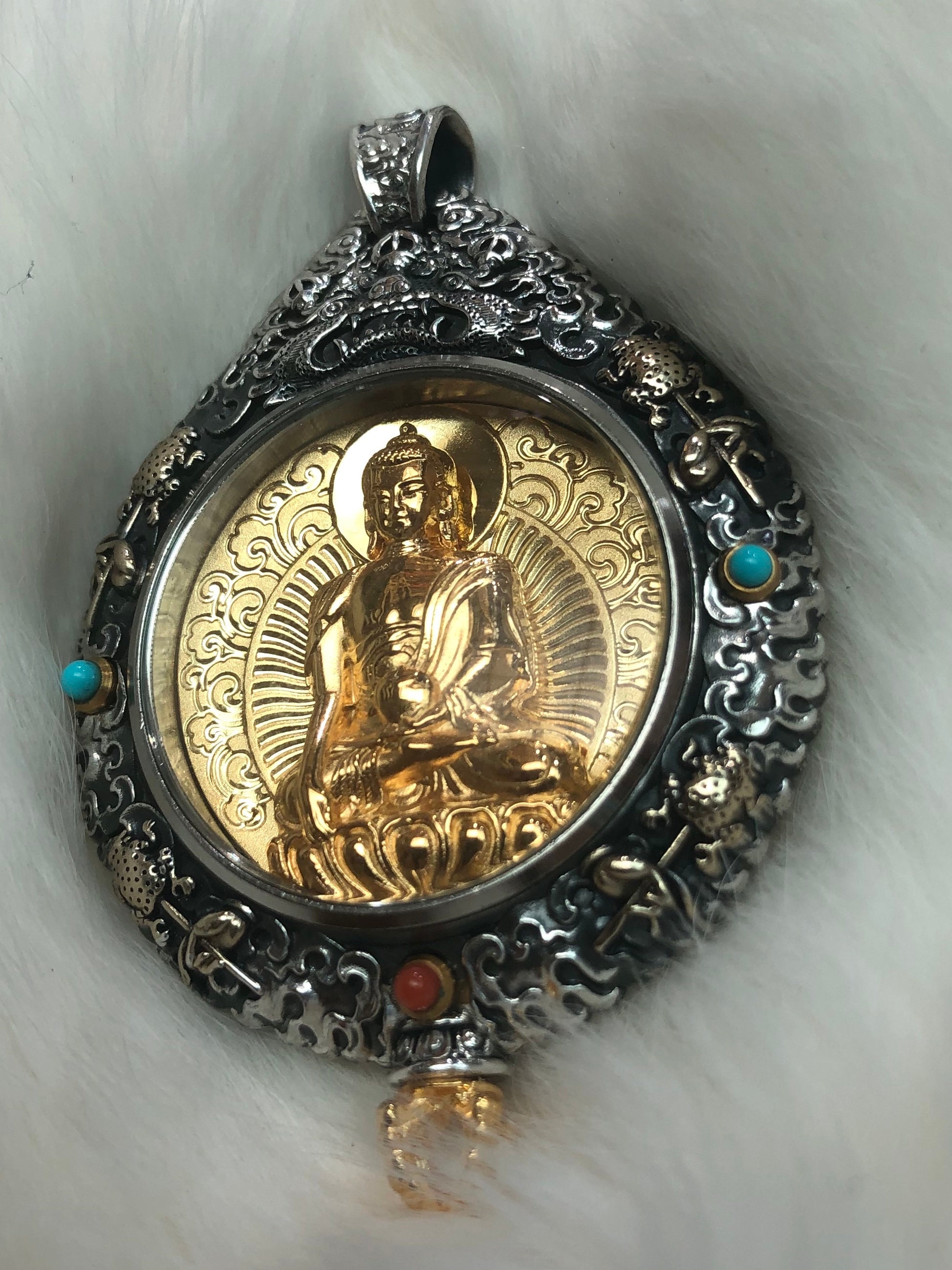 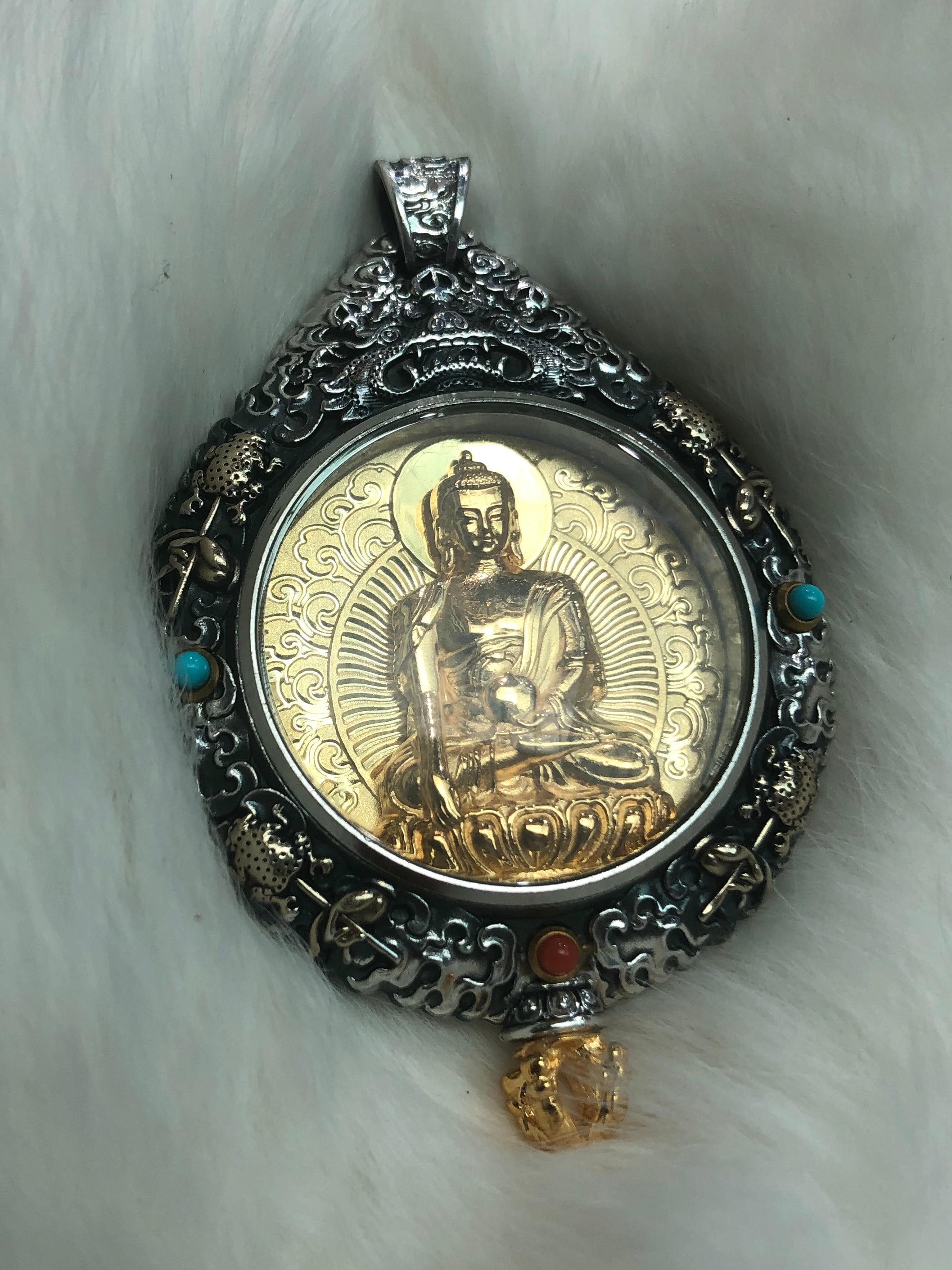 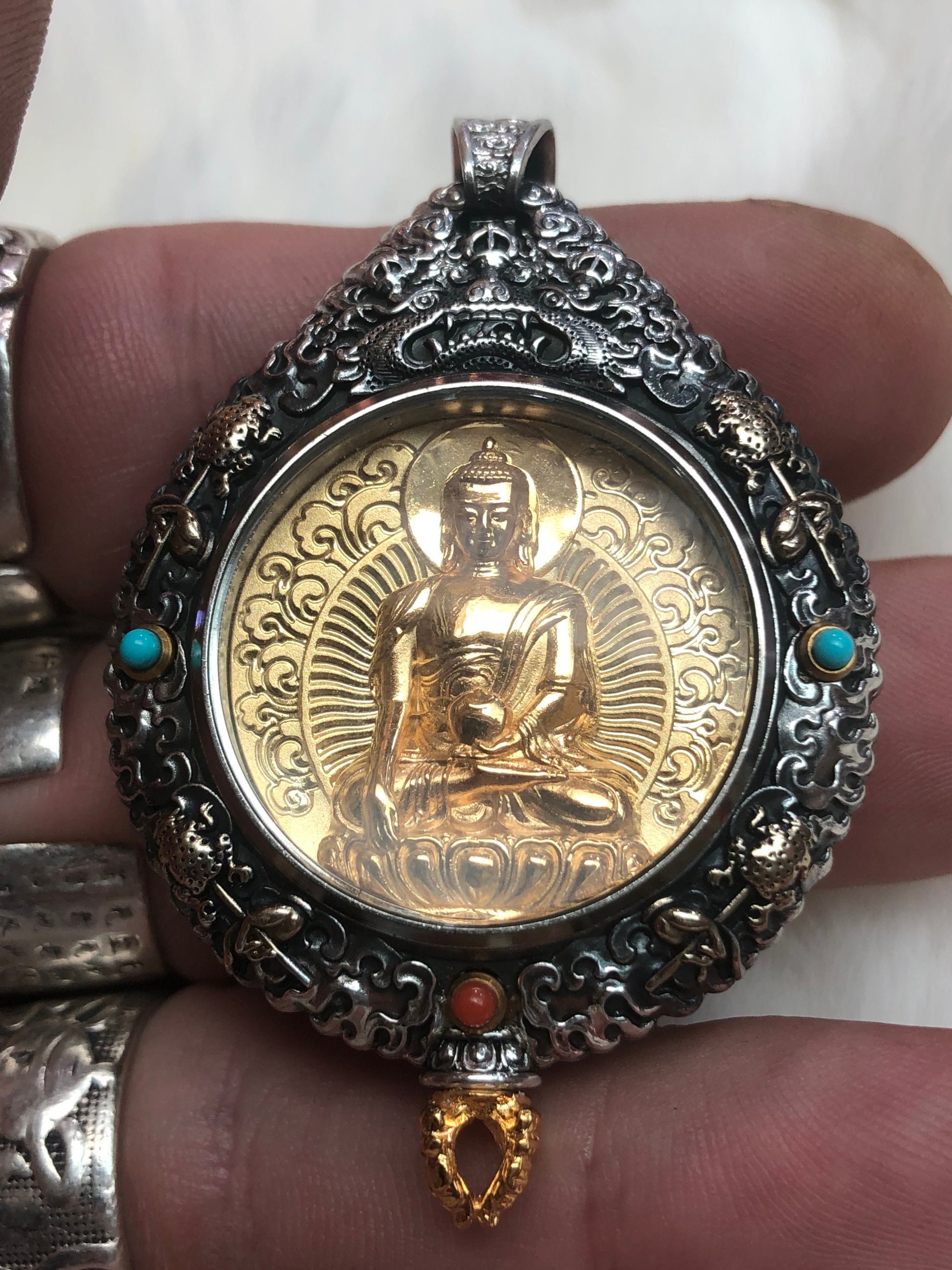 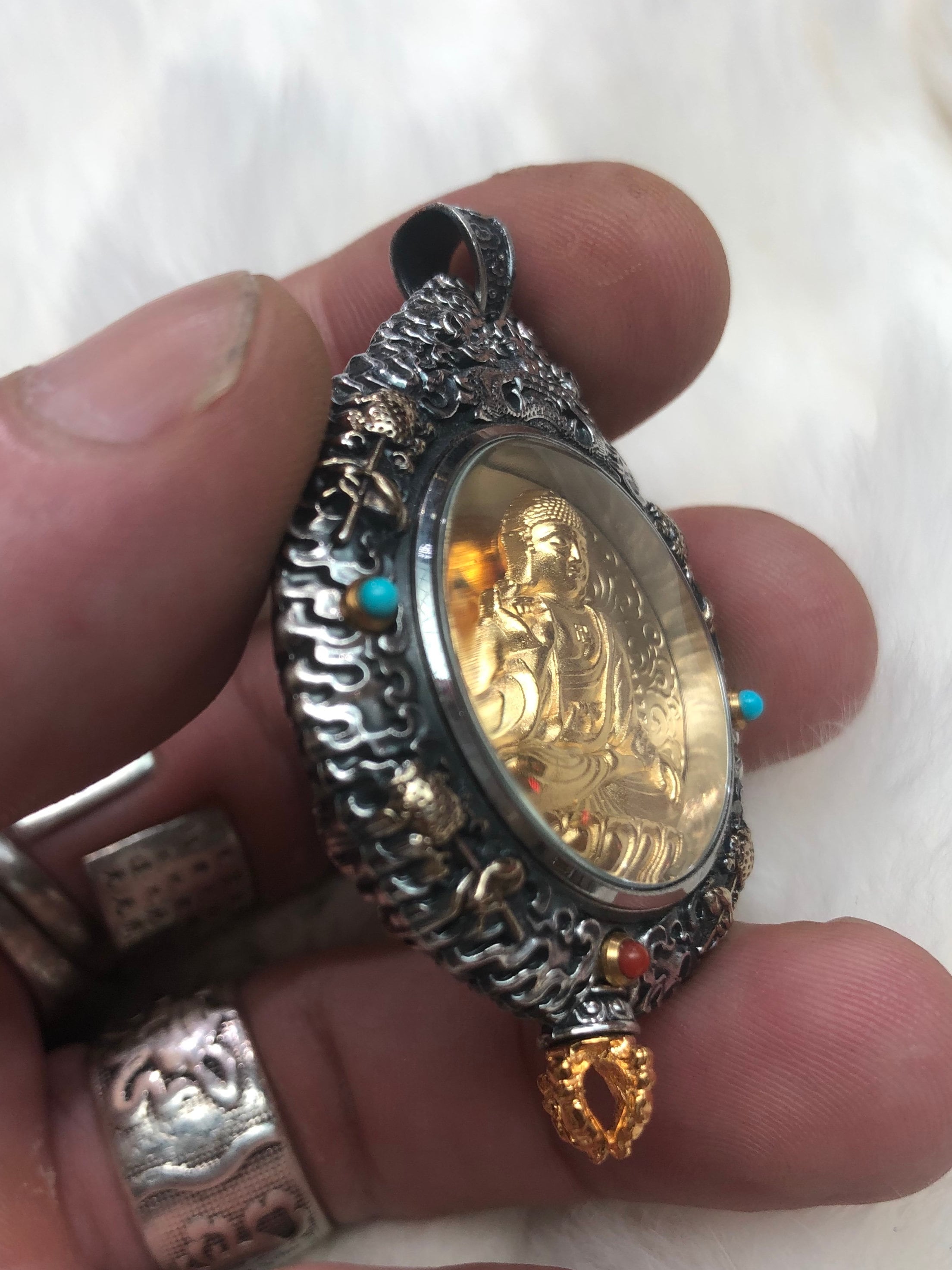 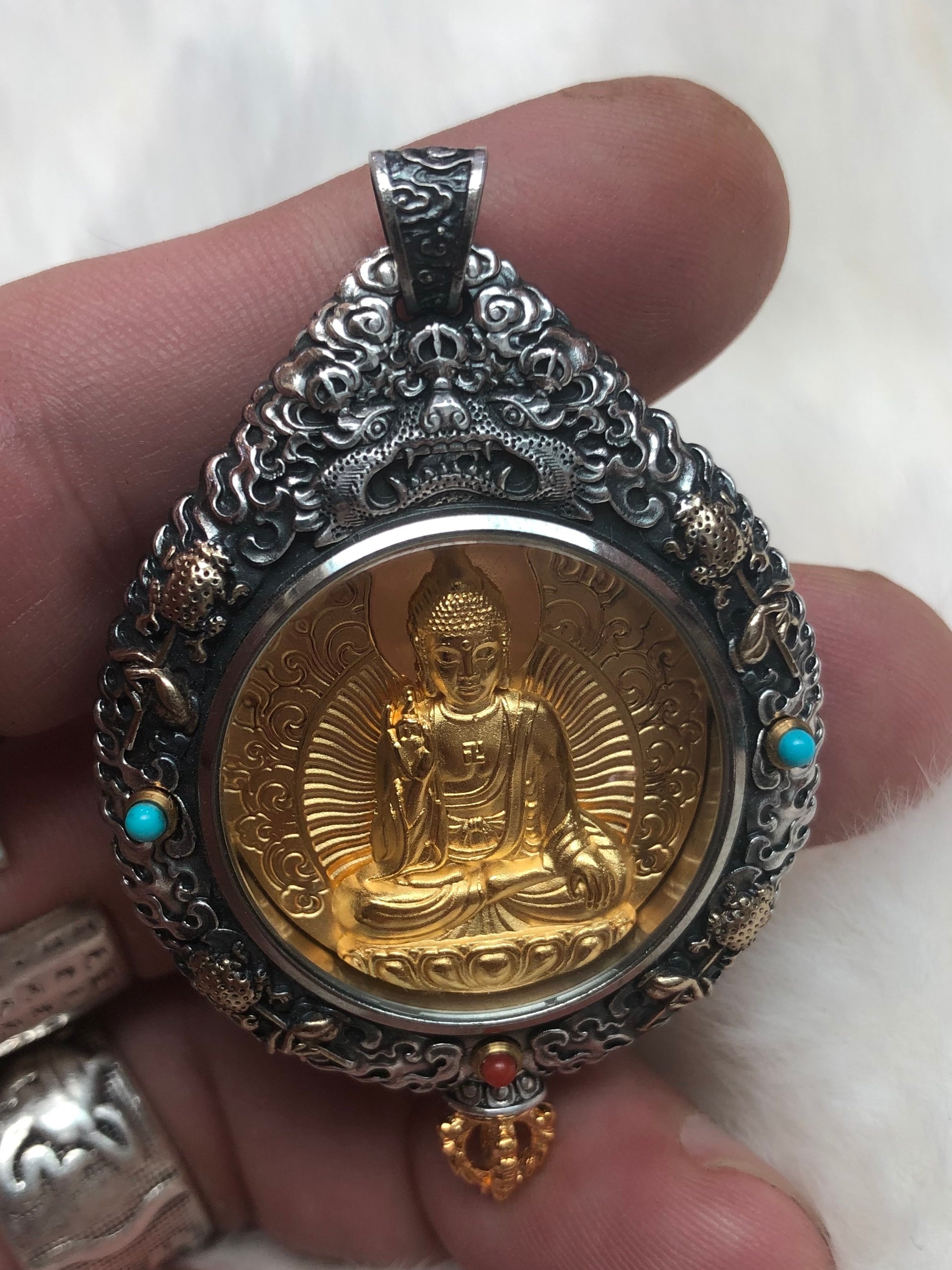 His career as a bodhisattva is described in the Bhaiajyaguru-sutra, He made twelve vows, two of which specifically express his desire to heal and save. He became a Buddha in a world called Vaid-ryanirbhsa or "Similar to Lapis lazuli."

Like Akshobhya, Bhaiajyaguru is the master of an "eastern paradise" and can form a pair with Amit-bha, master of the "Western Paradise" Sukh-vava. The paradise of Amit-bha is also mentioned in the Bhaiajyaguru sutra.

According to the Sapta tathegata-P'rva pra-idhuna vie-a vistara (Soutra of the wish of the seven tathegatas), Bhaajyaguru has seven emanations representing seven different ways of healing or protecting.

In Tibet its image can serve as a meditation medium to overcome attachment and negative feelings.

the Buddha of Medicine or Sangyé Menla (in Tibetan) is a tantric deity of Tibetan Buddhism.
Sangyé Menla's tantric meditation was introduced to Tibet in the 18th century by Shantarakshita. This meditation was synthesized in the 19th century by Jamgon Kongtrul Lodr-Thayé. His mantra is considered to have great strength against physical diseases or to purify negative karma.

In Japan, Yakushi Nyorai has been the subject of an important cult in Japan since the viith century when he supplanted Akobhya (Ashuku). Located to the east it represents rather the rising sun, life, while Amida which lies to the west is connected to the setting sun and the world of the dead.

Patronized by the Tendai school, which had close relations with the imperial family, this Master Buddha of the East was associated with the emperor. He was sometimes identified with Jizo. It is the 7th of the thirteen Buddhas of the tradition of Shingon Buddhism, and as such is associated with the funeral rites that take place at the end of the 49 days after death.

In the representations, and the particular mandalas dedicated to him, he is assisted by Nikko the boddhisattva of sunlight and gakko of lunar light. It is also protected and served by 12 celestial generals, yakshas that can have several meanings, such as hours, months, directions, etc. However, it does not appear on the mandalas taizai and kong-kai because its cult is not of tantric origin. Of the many temples dedicated to it, the most famous is the Yakushi-ji of Nara. In the same city, the Hury-ji and the T-ji are also home to a statue of the Buddha of medicine, that of the Hury-ji dating from the middle of the 17th century.

The most common rite is to read your wish 49 times, light 49 votive lamps and extend paper Prayer Flags 49 days in a row.