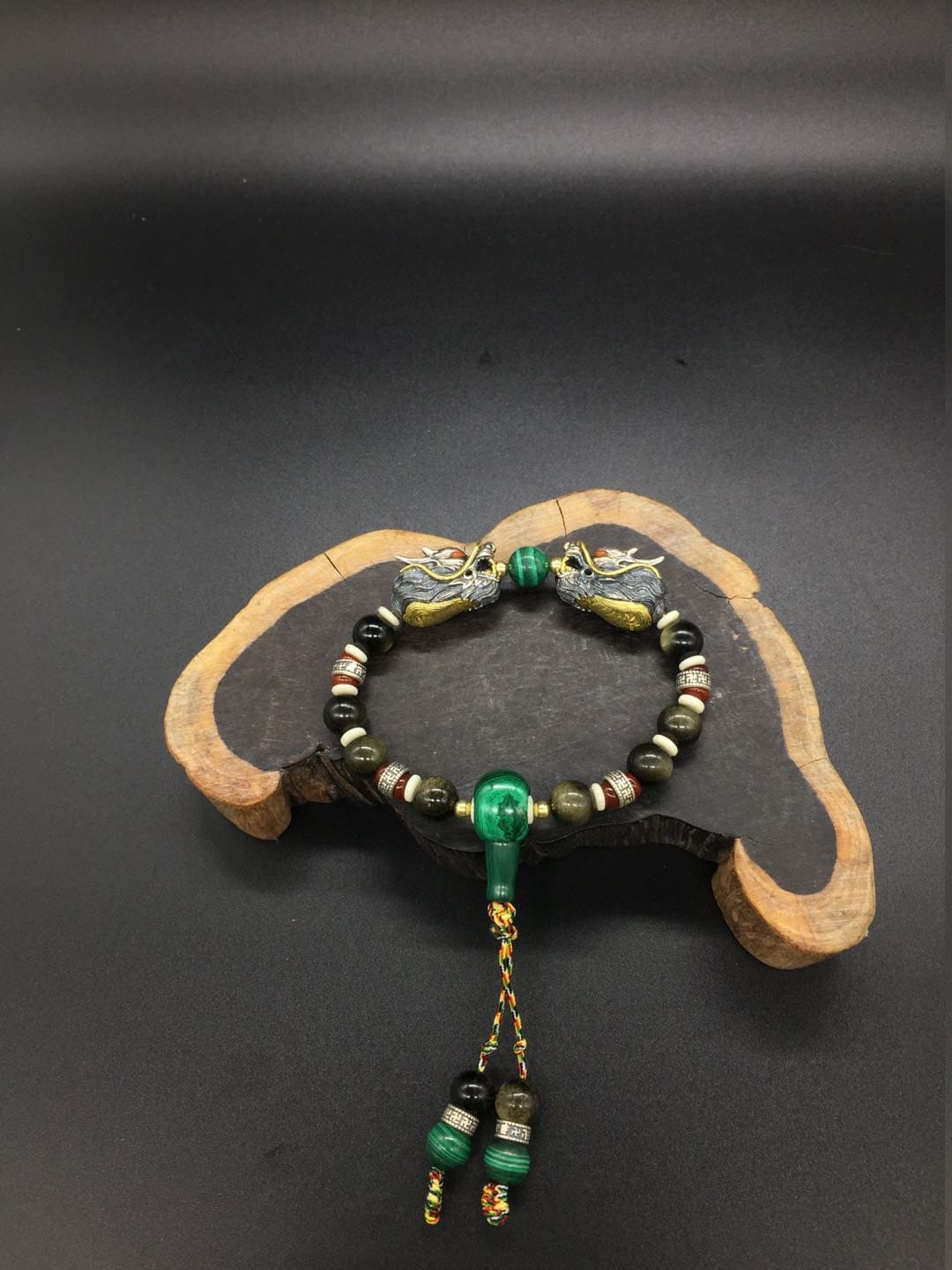 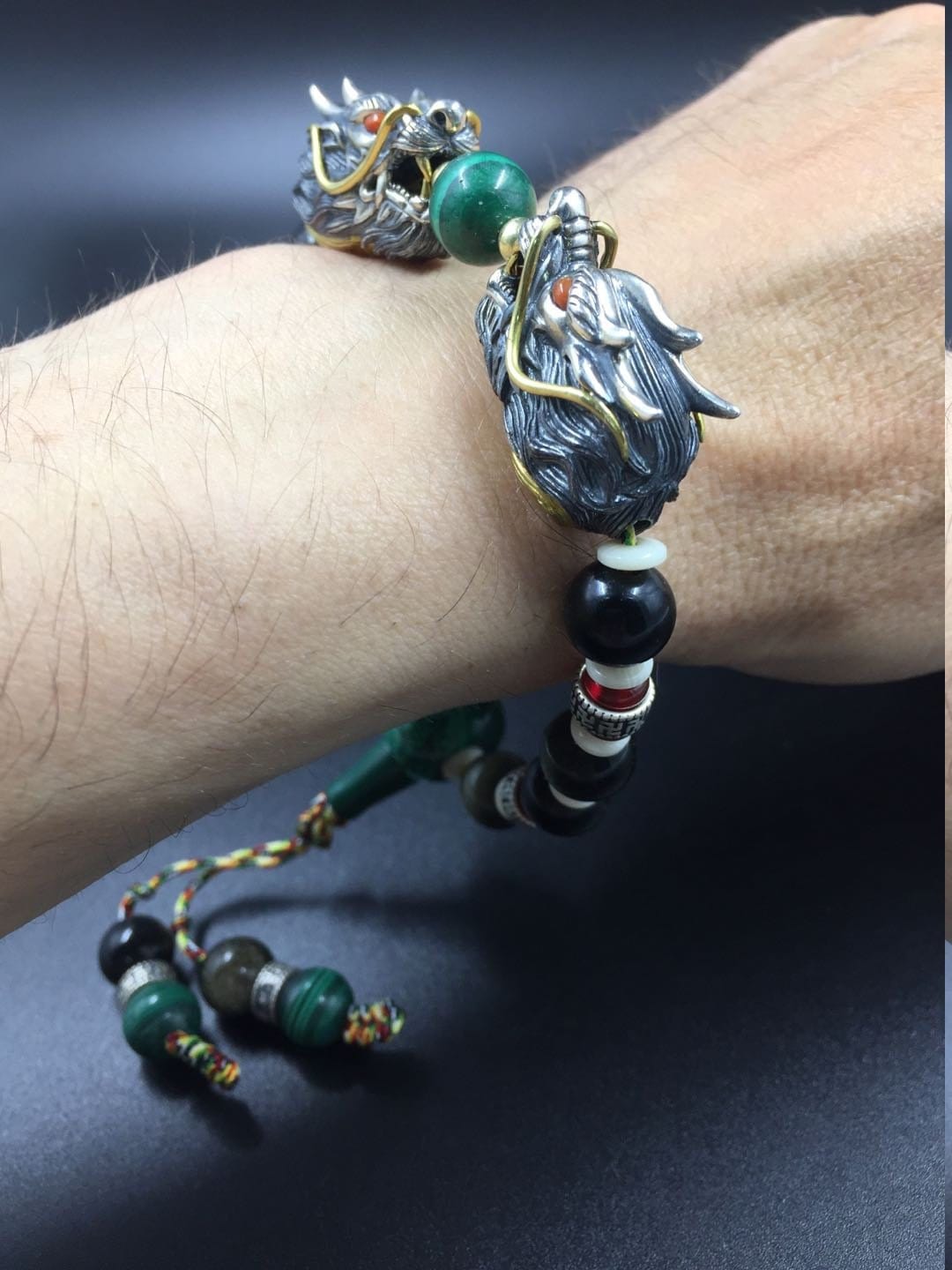 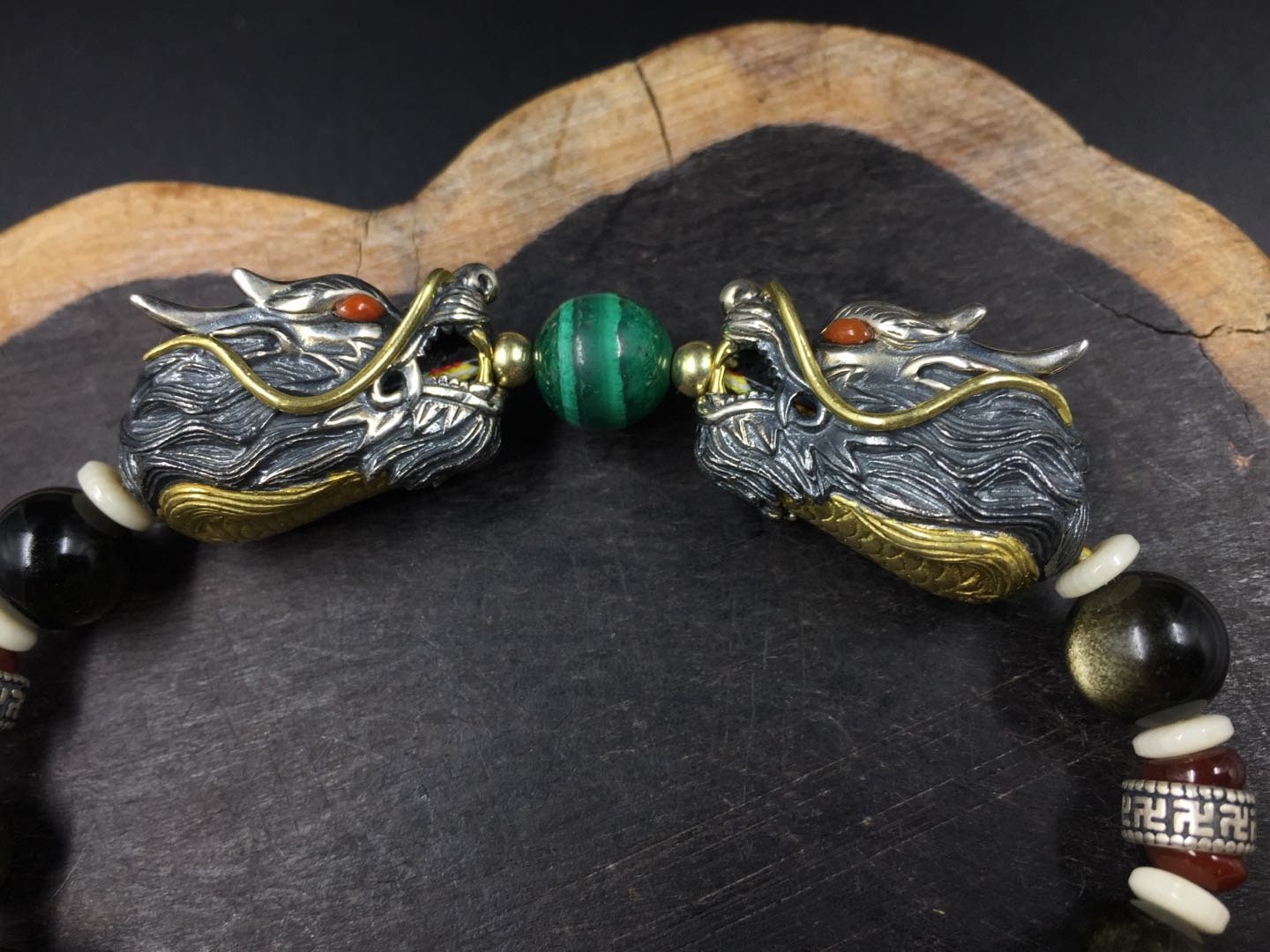 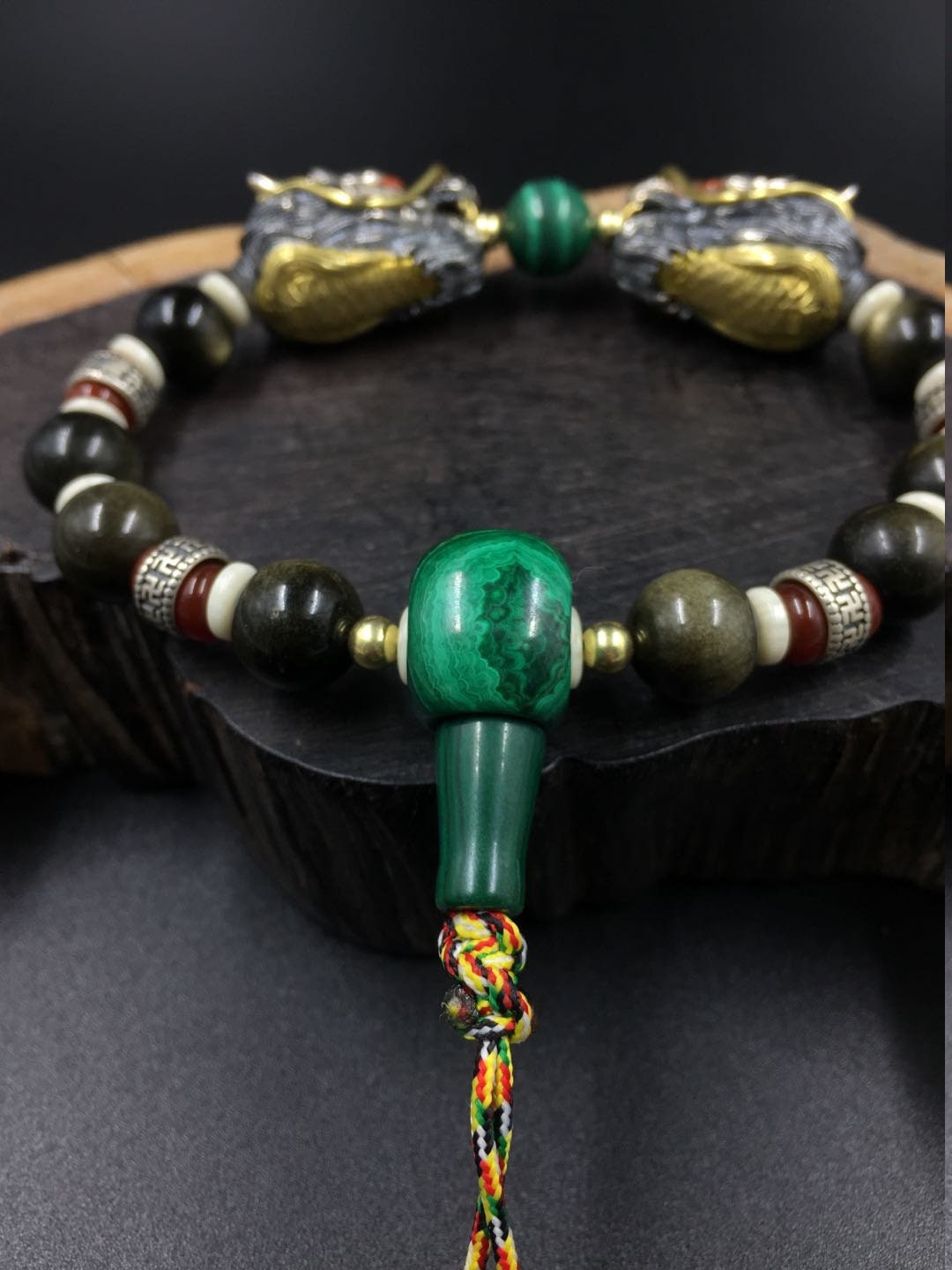 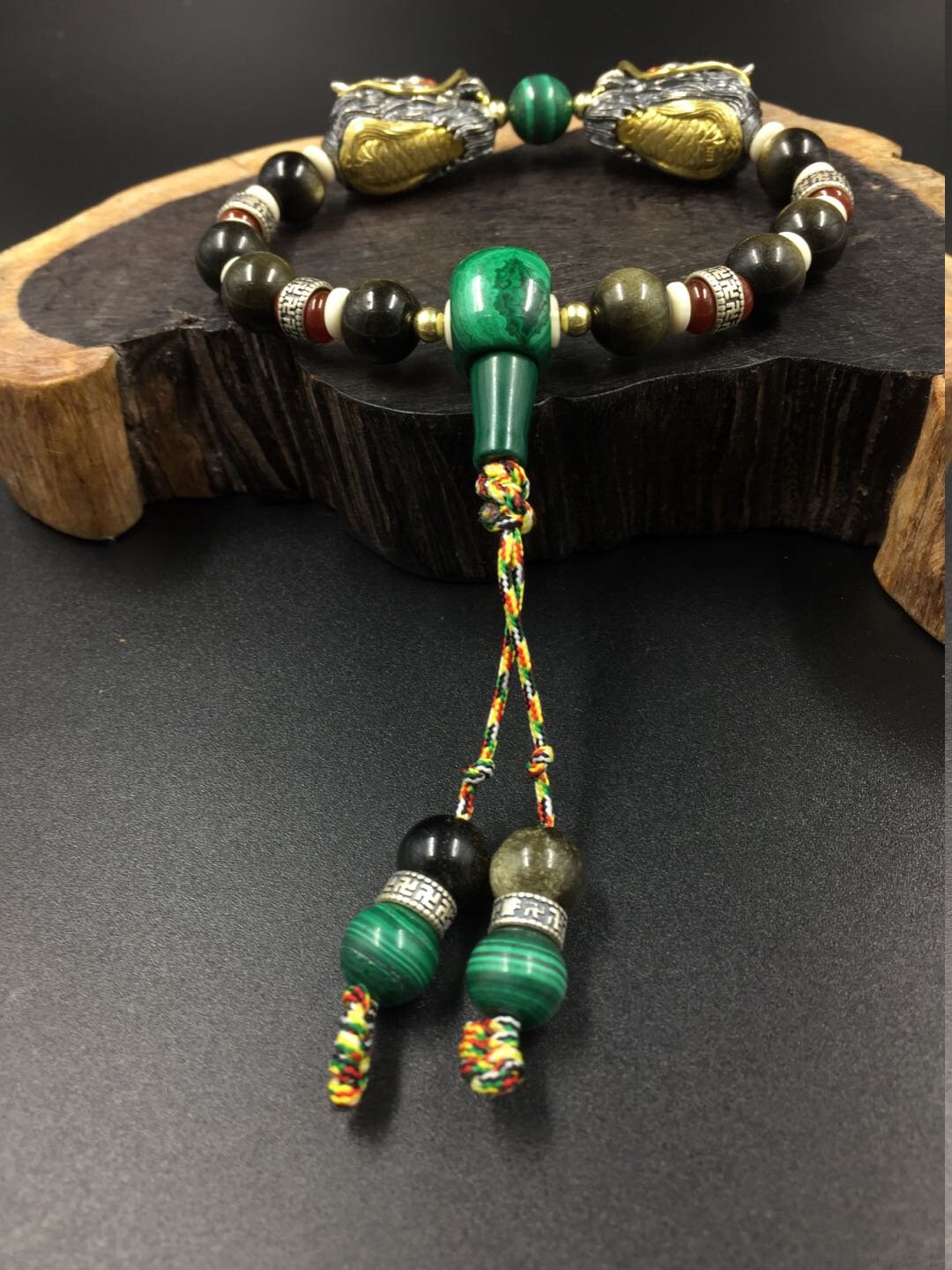 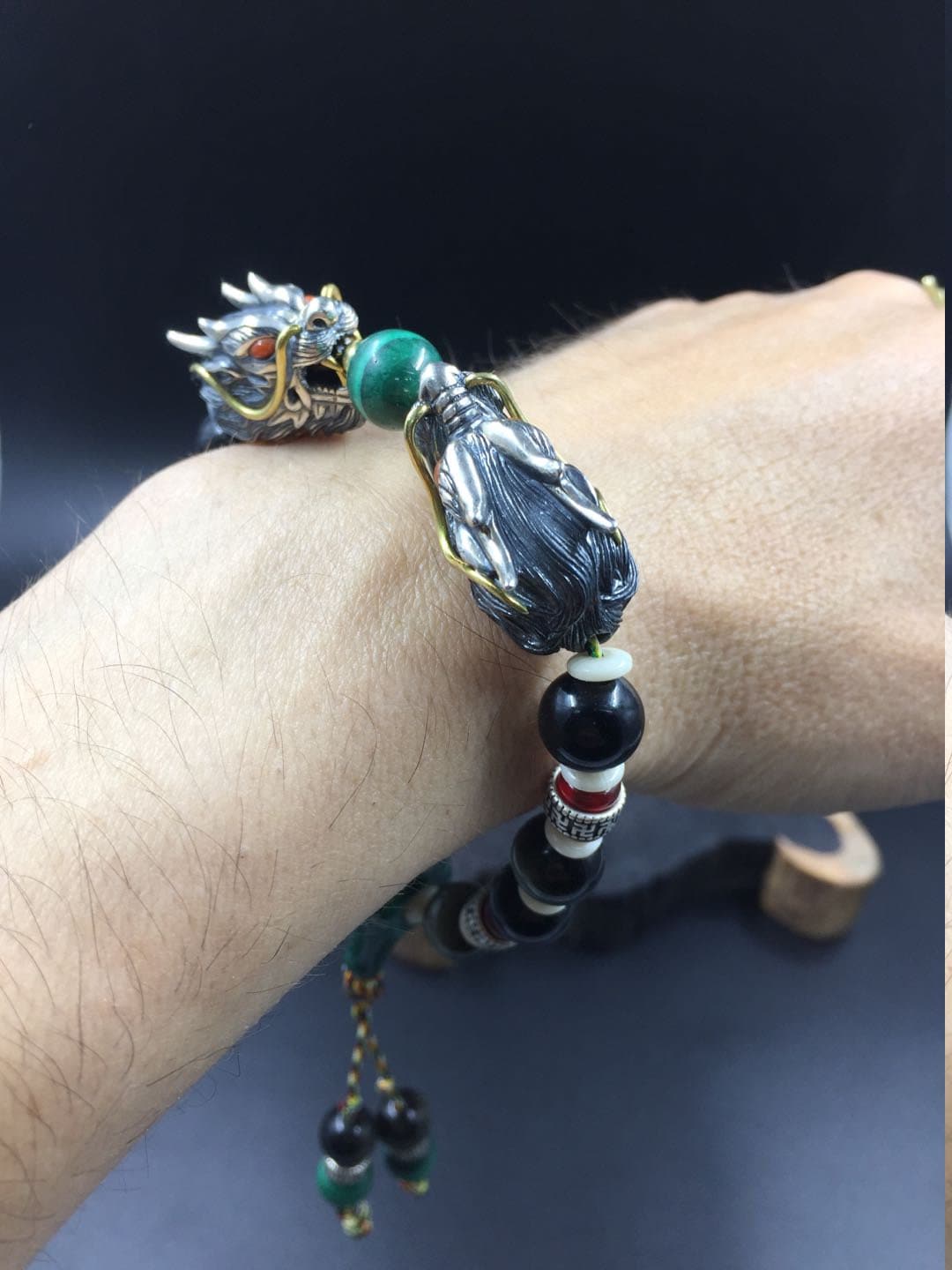 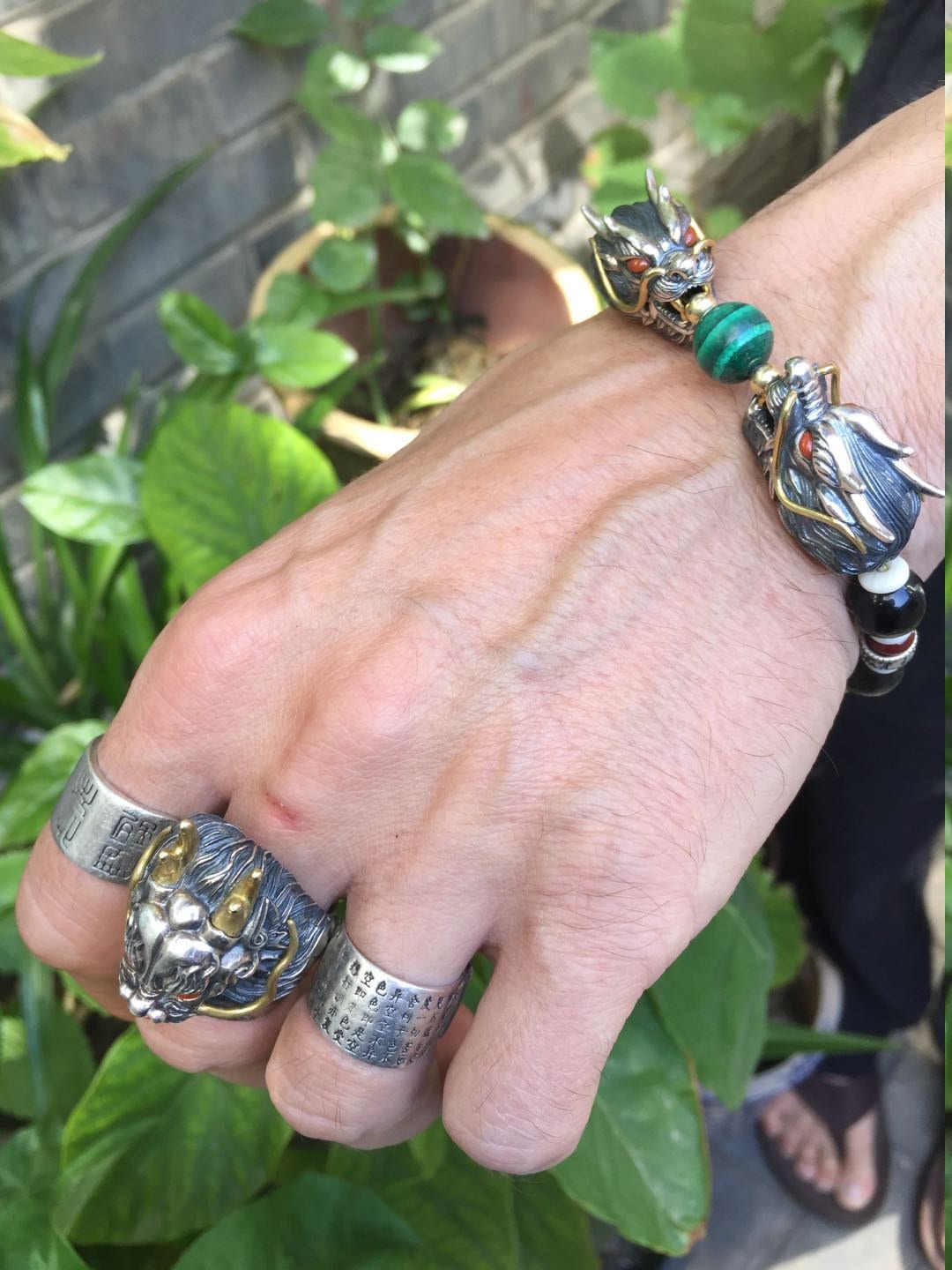 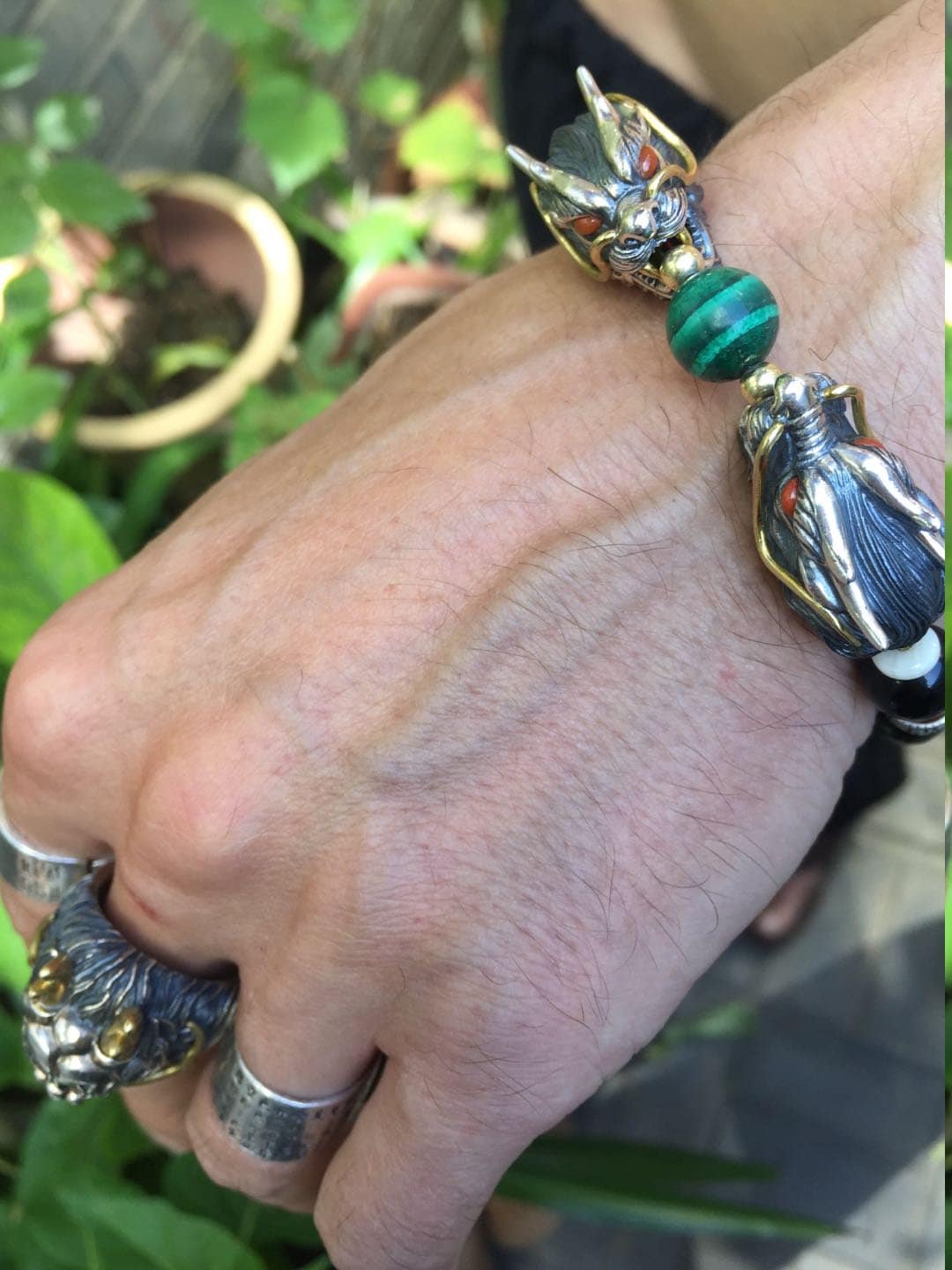 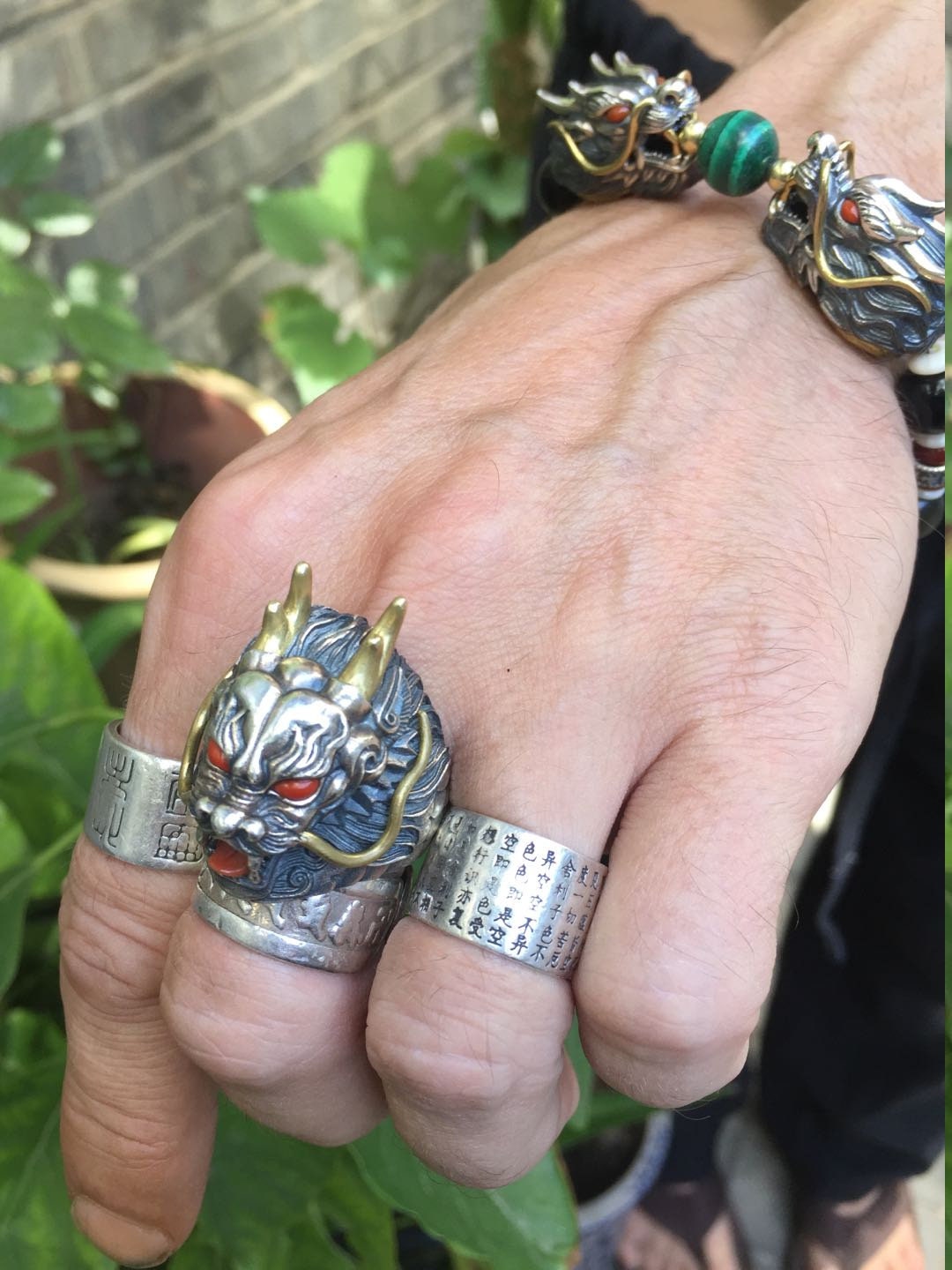 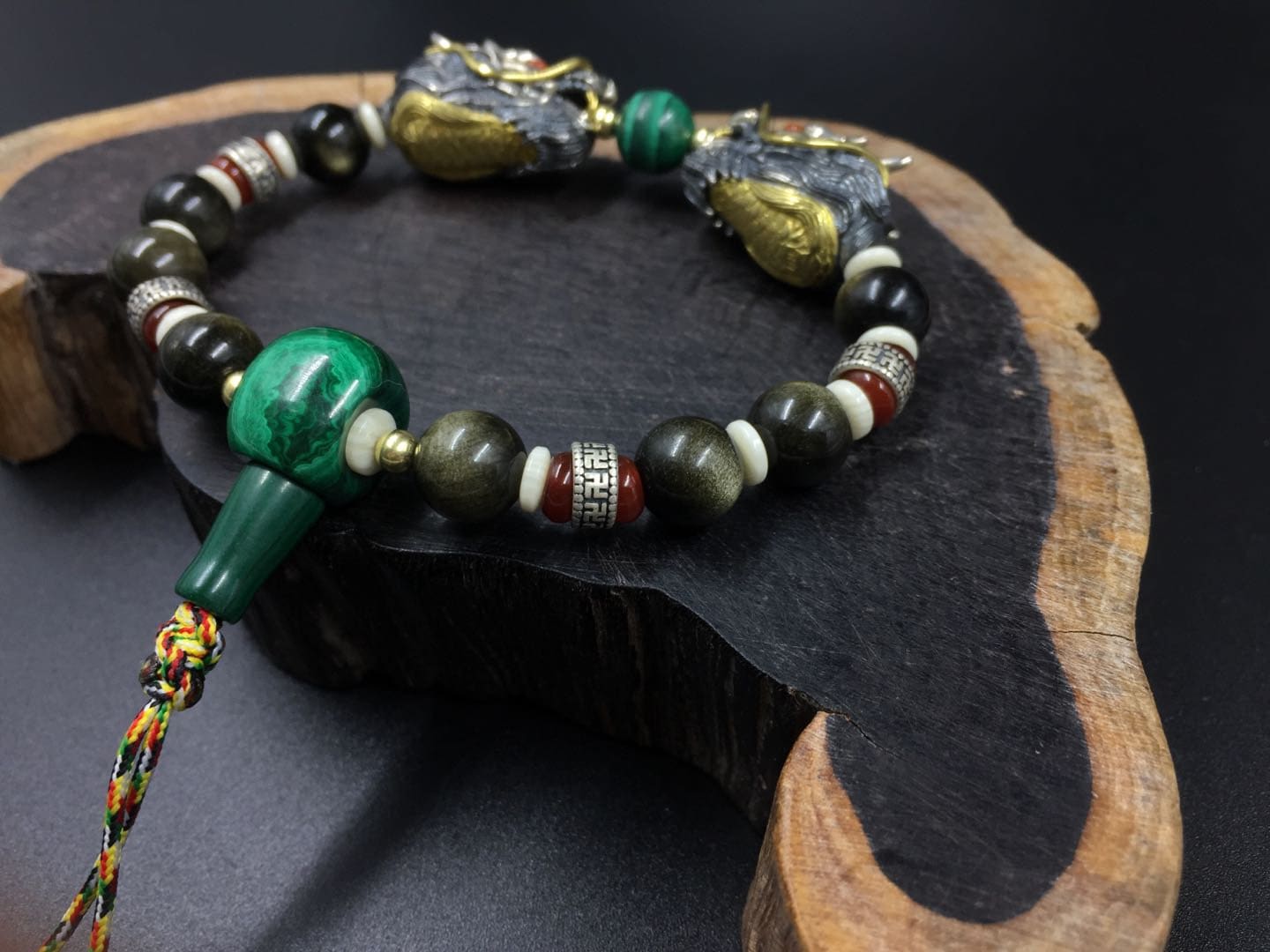 Each dragon whose eyes are set with agate called "nan hong" is entirely handmade.

Mexican Obsidian
Malachite of the congo.
Cornaline from Brazil.

The Chinese dragon 龍 (long) is a fantastic creature. Long a powerful symbol of favorable power in Chinese folklore and art, it is the personification of the concept of yang and associated with climate and water as the one that brings rain.

Legend has it that Huang Di (Yellow Emperor) used a snake for his coat of arms. Every time he conquered a new tribe he added the emblem of his enemy to his own. Huang Di was immortalized as a dragon that looks like his coat of arms. This explains for the Chinese dragon has the body of a snake; the scales and tails of a fish; antlers of a deer; the face of a qilin (a mythical creature genus deer with fire all over its body); and two pairs of eagle talons; and the eyes of a demon. They fly in the sky in the middle of the clouds. Almost all images of Chinese dragons depict them playing with a pearl of fire. It is assumed that it is the latter that gives them their power and allows them to ascend to paradise.

Also, as the Chinese consider Huang Di as their ancestor, they sometimes refer to themselves as "descendants of dragons".

Another legend says that carp capable of jumping over the dragon gate will become dragons. Several waterfalls and waterfalls in China are considered places of dragon gates. This legend is an allegory of driving and efforts to overcome obstacles.

Chinese imperial dragons have five toes on each foot; Korean and Indonesian dragons have four and Japanese three. To explain this phenomenon the Chinese legend states that although the dragons are originally Chinese as far as they went they lost their toes and to explain that they only exist in these countries if they had gone further they would no longer have had a toe. The Japanese legend is the opposite that the dragons first appeared there and that they had more toes as they moved away that further they would have had too many fingers to walk properly. In Korea and Indonesia both explanations apply according to the direction in which the dragon travels.

The number nine is considered lucky in China and Chinese dragons are often connected to it. For example a Chinese dragon is normally described in terms of nine attributes and usually at 117 scales - 81 (9x9) male and 36 (9x4) female.

The dragon is one of 12 animals of the Chinese zodiac that are used to designate the year in the Chinese calendar. It is assumed that each animal is associated with certain personality traits.

An imperial dress from Qing DynastyThe dragon was a symbol for the emperor in several Chinese dynasties. During the end of the Qing Dynasty the dragon was even adopted as the national flag. It was a death penalty for the manants (ordinary people) to wear events with the dragon symbol.

The dragon is the manifestation of imperial power, emblem of the Emperor and symbol of royal functions. It represents the Empress, while the Phoenix is a symbol of imperaticy.

Sea Control: Dragons are considered to be those that command over the seas. They can be in tornadoes or typhoons over water.

Dragons rule the seas and oceans. They can show up in tornadoes or typhoons. Guardians of the waters, they are rather benevolent, but they can be clumsy, have the wrong task, fall asleep, or even get drunk, and then it is a disaster: the river overflows, the storm ravages the coasts, or, on the contrary, the springs dry up, the drought threatens. We must then call them to order, or even punish them: if the rain takes too long despite the prayers, the statue of the dragon is taken out of its temple to expose it to the great sun: for it is well known that the Dragons do not like the sun too much...

Many dragons haunt china's skies. Some continue tirelessly the Sun and Moon, causing eclipses. (It is interesting to note that astronomically, the head and tail of the constellation of the dragon are the nodes of the moon, the points where eclipses take place). A great fire dragon conditions his moods life: he opens his eyes and it is the day, he closes them and it is night. His breath causes storms. Thunder is a manifestation of his anger, or his fights with other dragons.

They also play an essential role in agriculture and represent the cycle of vegetation, represented by the K'ien hexagram, principle of heaven and creation, whose 6 solid lines represent the 6 stages of the manifestation of plant life:

The first is the "invisible dragon", like the buried seed, the power of creation not yet expressed.
The second is the "dragon of the fields", like the germ that grows, but is not yet visible.
The third is called "visible dragon" and symbolizes the germ appearing above ground.
The fourth is the "leaping dragon": the plant grows and gives its fruits.
The fifth is called "flying dragon", like the seeds and pollen that swarm.
The sixth is the "flying dragon", it is the spirit that orders the whole, the heavenly dragon king.
This association of the dragon with the water element and the plant cycle can be found in the Dragon Boat Festival, which takes place on the lakes and streams of some Chinese provinces in memory of the suicide in 290 BC of the poet Qu Yuan, desperate that his talents were not recognized by the king. This remembrance ceremony is also linked to the time of transplanting the green shoots of rice, which takes place at the same time, after the heavy spring rains.

The oldest archaeological object depicting a dragon was discovered in 2005 in a nobility tomb in the palatial area of Erlitou (二头) in Henan, the supposed site of the capital of Xia. Its age has been estimated at 3700 years; it is composed of some 2000 pieces of turquoise. Other ancient dragon-shaped artifacts have been found in the present-day territory of popular China, but in outlying areas.