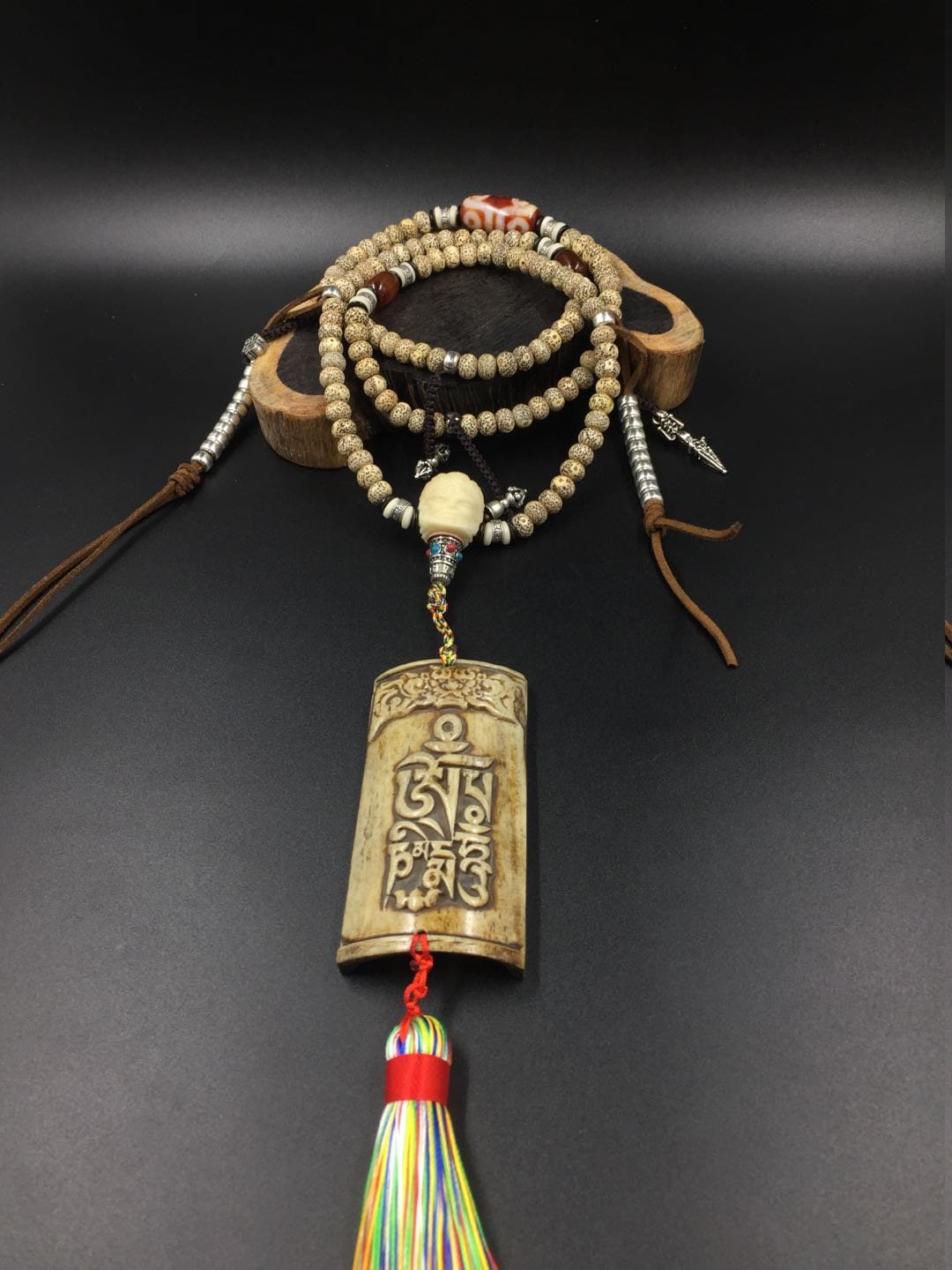 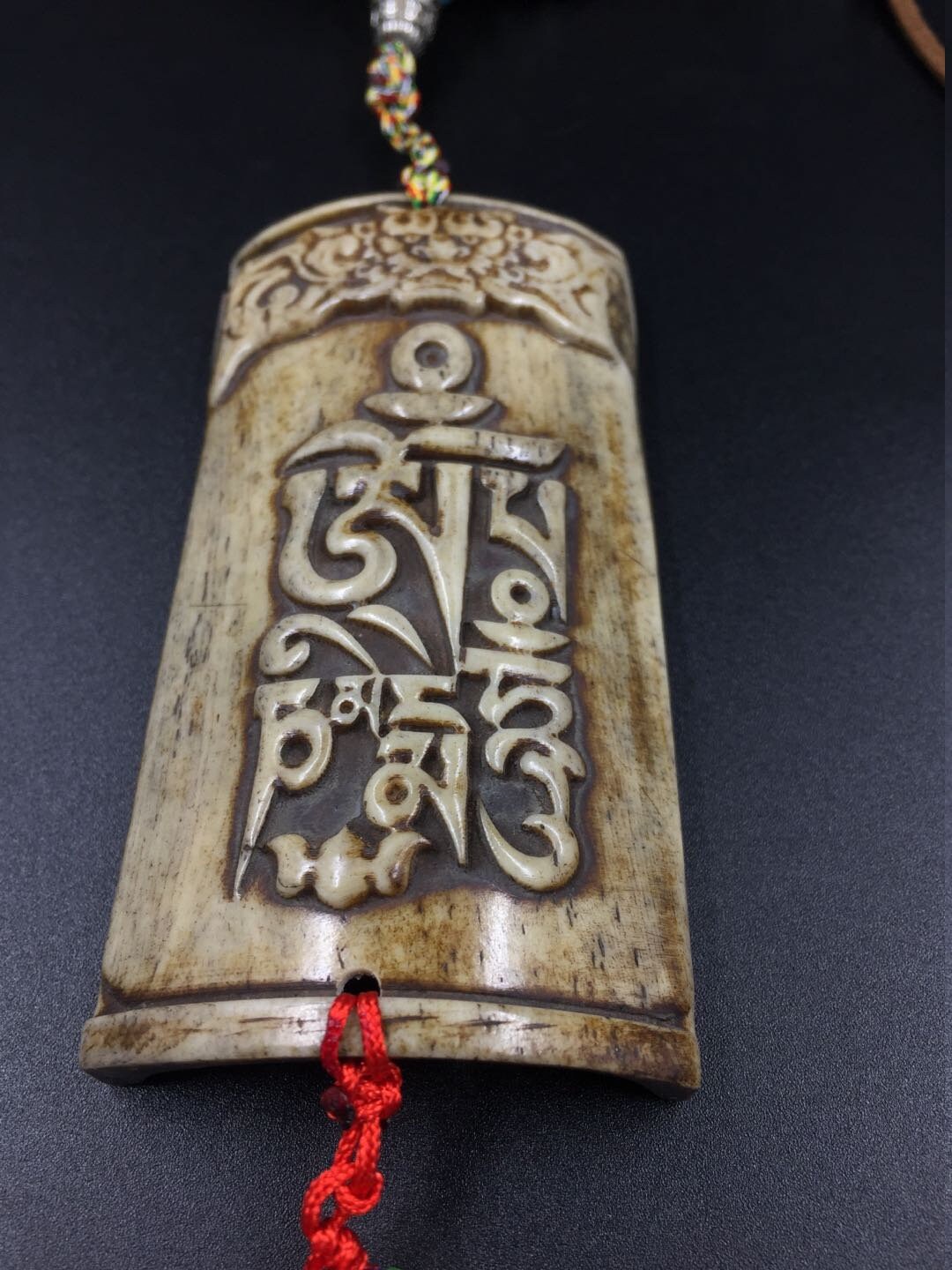 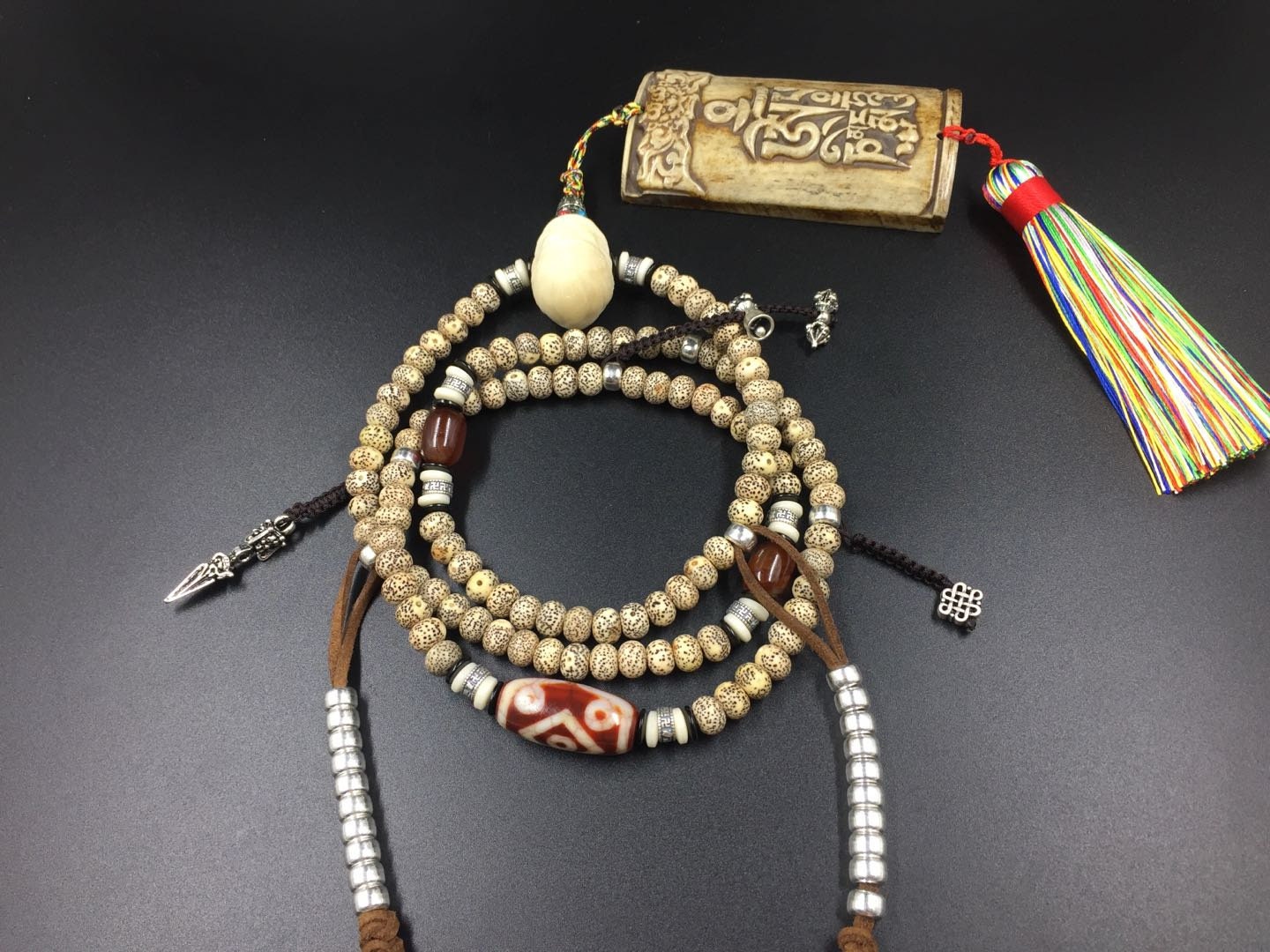 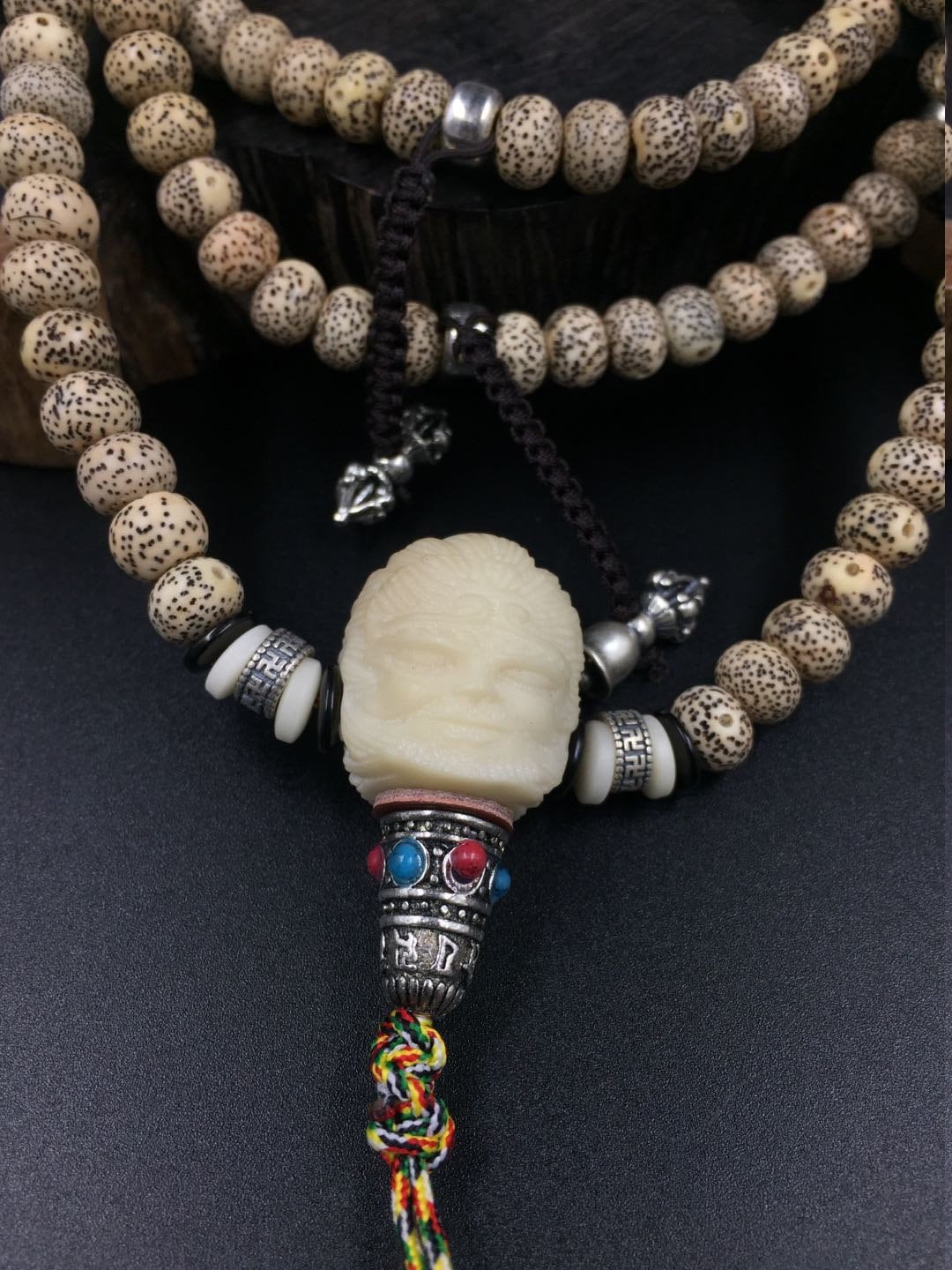 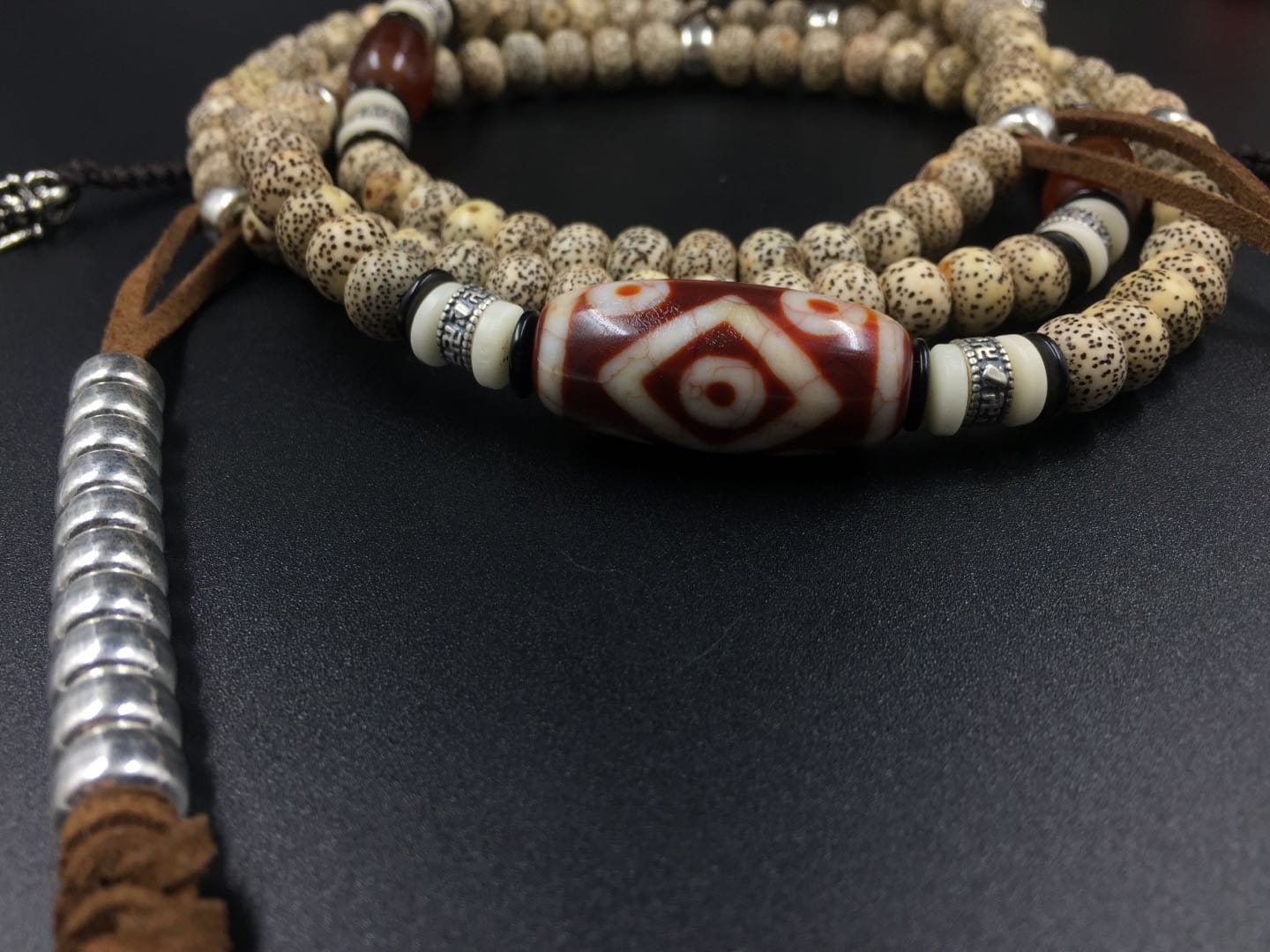 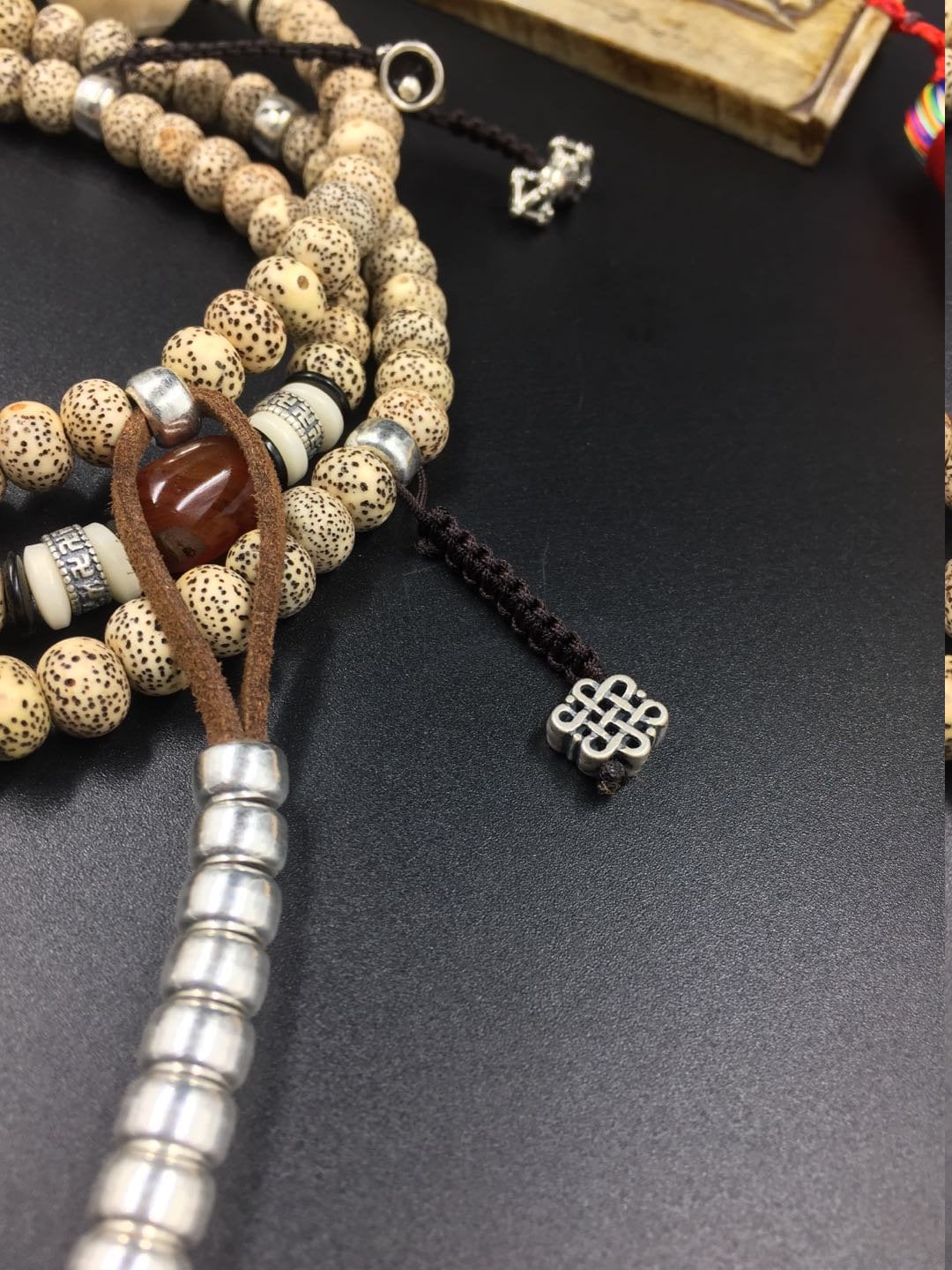 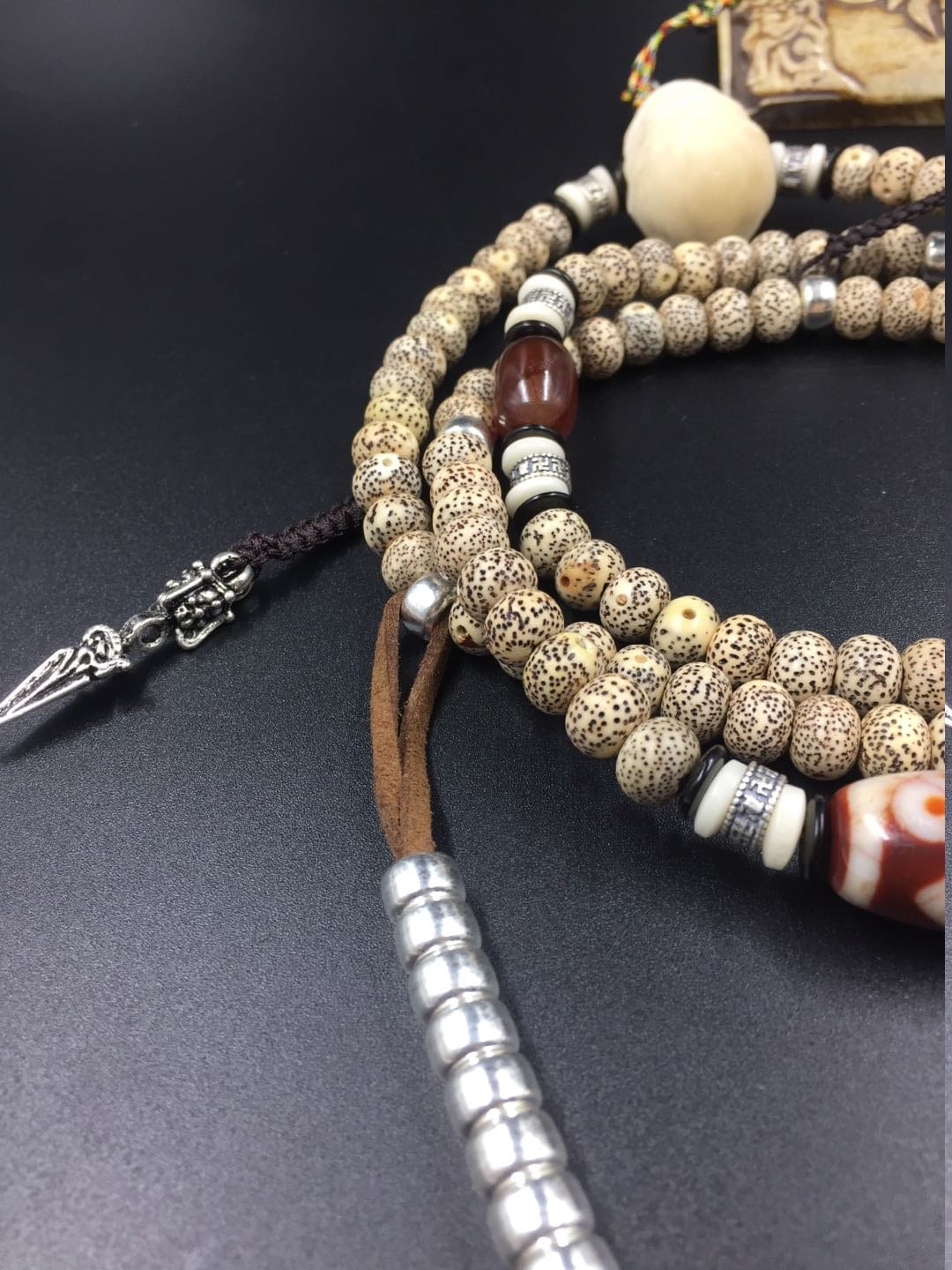 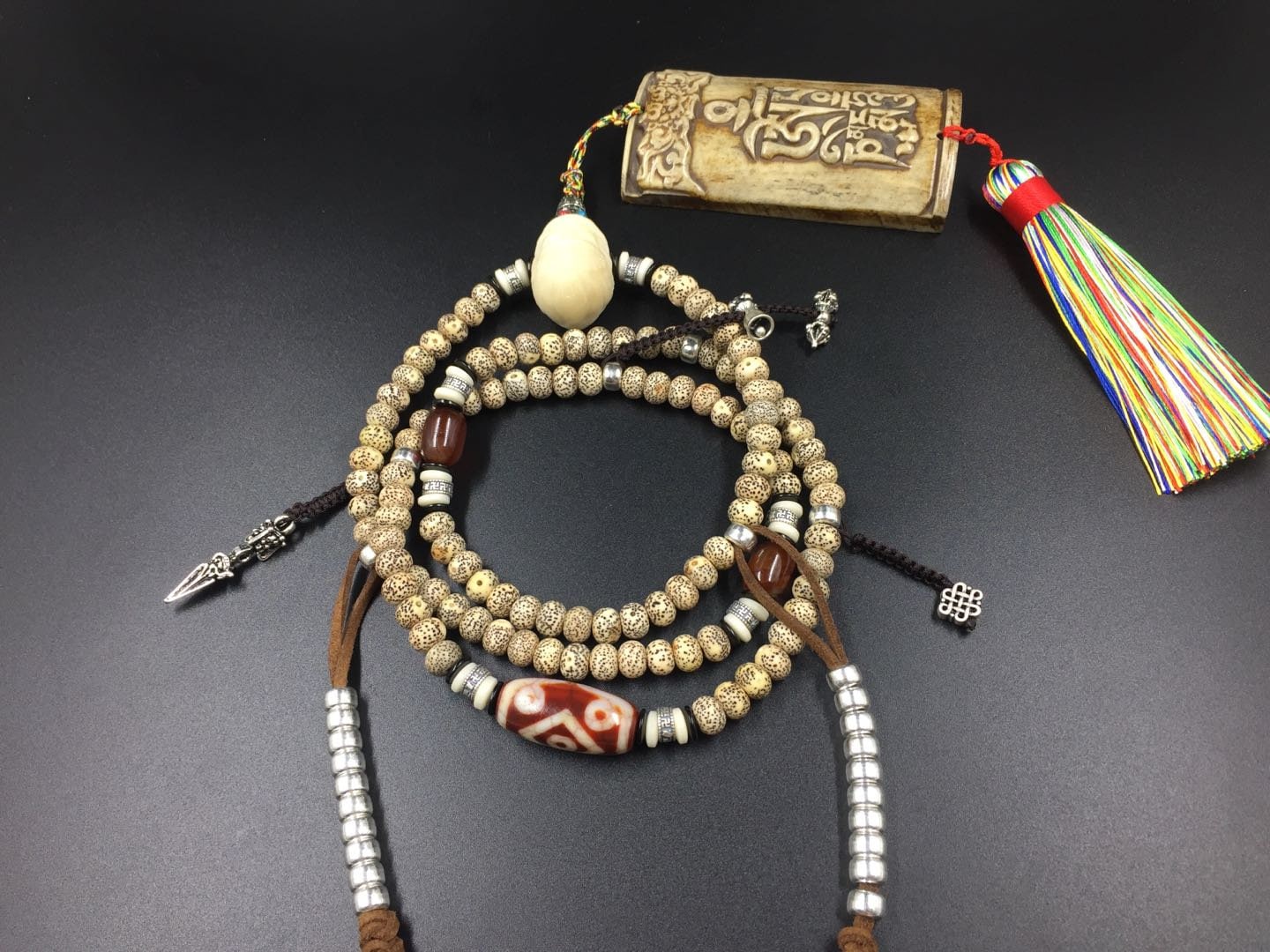 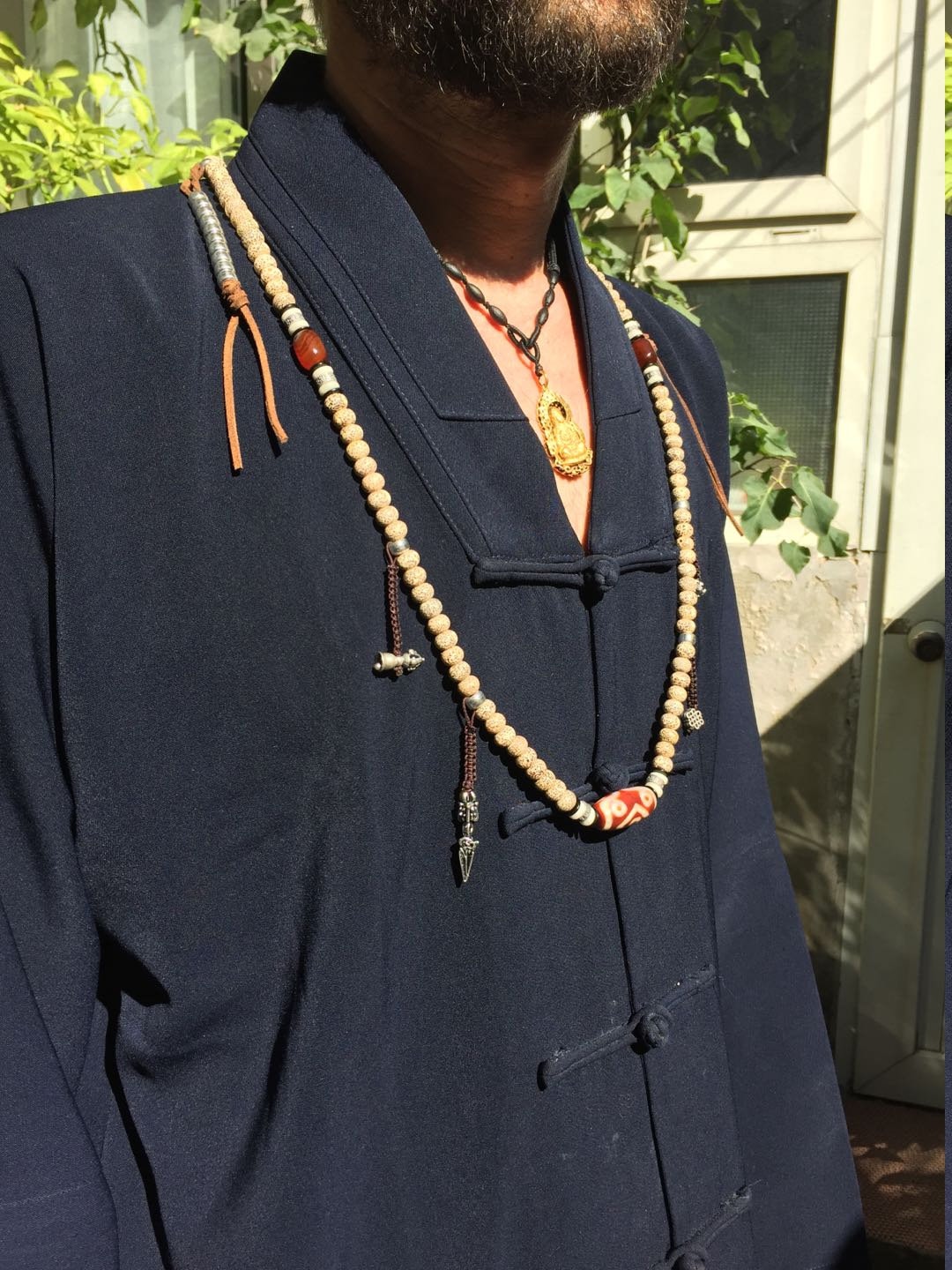 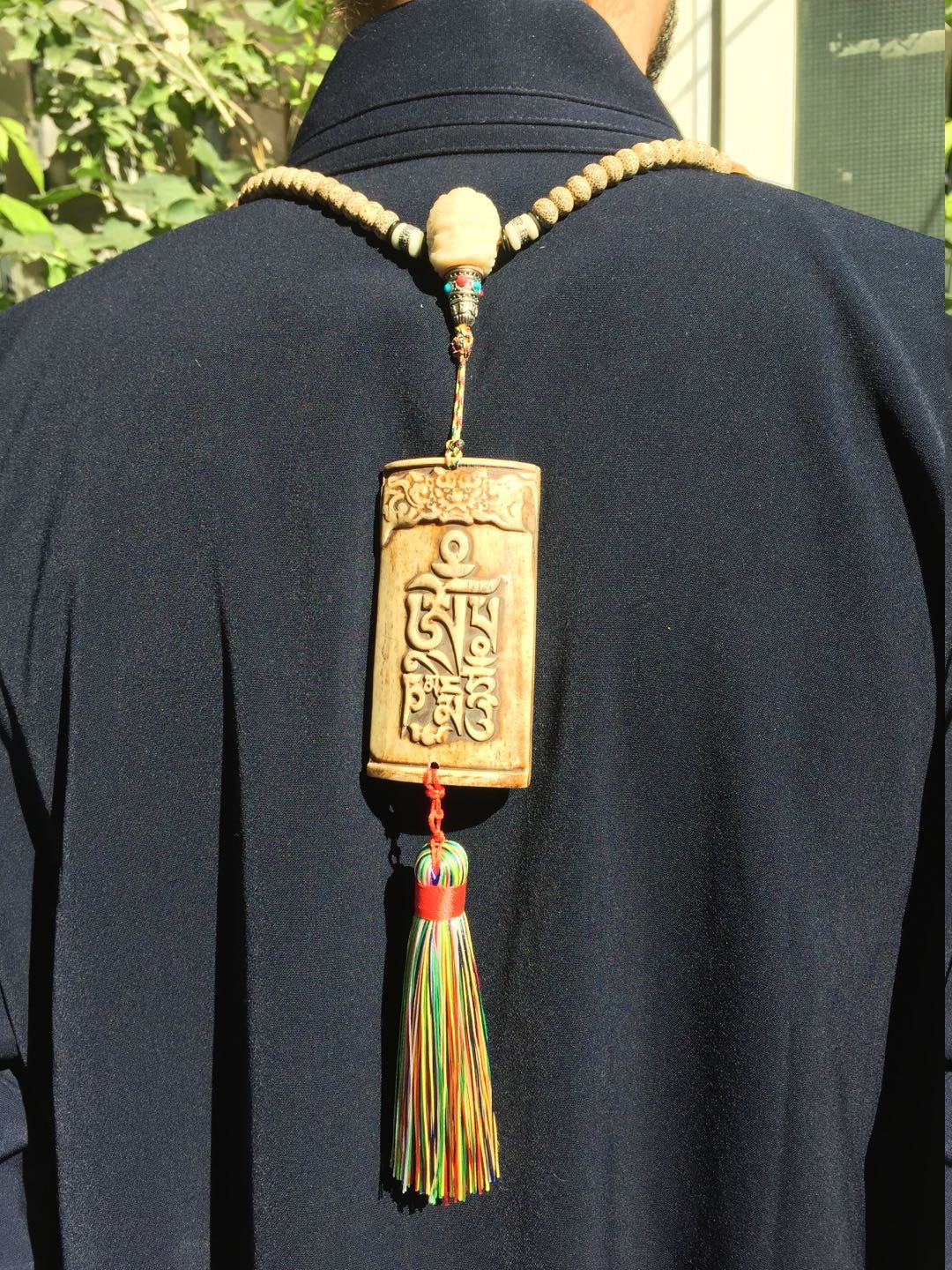 Buddha having attained enlightenment under a sacred fig tree, pipal seeds are the most traditional material for making malas. These seeds patinate and take on a beautiful shine over time called "porcelain layer". Our seeds come from hainan island known for growing and drying the finest quality in the world. Be careful many specialized site and stores name these seeds as Lotus seeds by mistake.
The whole is embellished with accessories straight from Tibet (Gyaltran).

The Dzi that can be translated as "brilliantly polished", "luminous" are agate beads of elongated shape having on their surfaces a decoration of various and varied geometric shapes, but each having a very specific meaning. Dzi are considered by Tibetans to be powerful protections. According to legend, these stones are not of earthly origin, but, shaped by the gods and sown on earth so that whoever finds them, has a better Karma.
Dzi dating back 4500 years have been found in Tibet during archaeological excavations, so in the middle of the Bön shamanism period long before the arrival of Buddhism.
Statues can be seen around the neck in temples or on llamas.
The stone is made of agate and the drawings are made by hand according to a secret technique.
Each Dzi has a meaning according to the representations on its surface

Finishing head depicting Sun Wukong, often referred to in English as the Monkey King, is one of the most famous fictional characters in classical Chinese literature. This monkey, the main hero of Wu Cheng'en's novel, The Peregrination to the West, is the first disciple of the monk Sanzang, who is in charge of going to India (in the west) to bring the sacred scriptures of the Buddha to China (in the east) and serves as his bodyguard with a dragon, Longwang sanjun, a man with a pig's head, Zhu Bajie and an ogre, Sha Wujing.

Gifted with speech and conscience, he is known for his strength, speed and extraordinary magical powers, but also for his mischievous nature and his past as an irrepressible troublemaker.

The origin of Sun Wukong is petrogenic in nature: he was born from a rock (like the god Mithras) struck by lightning, which spawned a stone egg.

As soon as he got out of his egg, he followed a group of monkeys and helped them cross a waterfall behind which was a cave: Huaguoshan DongtianSino 6 (the Celestial Cave of the Mount of Flowers and Fruits). For this feat, he became the Houwang (Monkey King) and the King of this new domain. He was happy, but after some time he was bored and lamented just to think that he should die one day.1

On the advice of the old monkeys, he went in search of a Master who could teach him the art of cultivating his body and mind and thus become Immortal. He eventually found what he was looking for at the Mount of the Terrace of the Spirits of one Square Inch of the Cave of the Leaning Moon and the Three Stars, in the person of Patriarch Putizushi3 or Xuputi (Subhûti). After following the training of the Taoist master, versed in all the secrets of the Way, he knew how to master 72 transformations and climb the clouds thanks to his jindouyun tumbling in the clouds.

Back in his kingdom, he learned that his subjects had been preyed upon by a monster, the Demon King of Chaos, who was persecuting them.5 He fought and defeated the monster, but decided that he needed to have his own army in order to protect his domain. Also, again on the advice of the elder monkeys, he went to fetch all the weapons he could on the border of the land of Aolai and equipped his entire army with them. But having become Immortal, he himself could not find a weapon that was to his measure; the elder monkeys offered him to go to the Kingdom of the East Seas where the Dragon King resided who would certainly have what he was looking for. On the spot, in his Crystal Palace, he forced him to give him his best weapons. Helped by his wife and daughter, the Ruler of the Seas offered him the Pillar that the Great Emperor YuSino once used to fill the sea. Finding the object too large, he had it shrunk until he could hold it in his hand; it was called Bâton Cerclé d'Or and it could take the size its possessor wanted: to be as big and big as a mountain or as small and thin as a needle. Not content with this theft, he summoned the other three Rulers of the Seas and forced them to give him a red golden helmet with phoenix feathers, a gold breastplate, as well as wonderful boots embroidered with pearls to walk and run on the clouds. His behavior towards the Dragon Kings led them to file a complaint with the Jade Emperor.

As the end of his life had come, after a party he was giving, Sun Wukong fell asleep drunk, and while he was asleep, he was visited by two emissaries from the Underworld who garrotted him and took him to the Land of Shadows. Convinced that there was a mistake, he forced the Ten Kings of the Underworld to bring him the Register of the Living and the Dead and equipped with a brush, he crossed out his name and that of all his companions. For this new misdeed, another complaint was addressed to the Emperor.

Informed, the Emperor of Jadevoulut immediately dispatched his army to punish the insolent, but the Spirit of Venus, the Most White Star of Metal interceded in his favor and persuaded the monarch to summon the rebel to Heaven and give him a title; it was that of Bimawen the Celestial Squire, Head of the Stables of Heaven. Learning that this rank was the lowest in the hierarchy, he fled and returned to his kingdom, cursing Heaven and proclaiming himself the Equal Great Saint of Heaven; This had the effect of offending the Jade Emperor, who sent the King of Heaven Li8 and his son, Nazha the Third Highest Son at the head of his army in order to punish him for his audacity. But more resistant than he seemed, the Monkey King managed to defeat his opponents, one after the other, so, again, Taibai Jinxing intervened and convinced the monarch to grant him his title, since he did not rhyme with anything in Heaven and also granted him the guard of the garden of celestial peaches.

Arriving at the garden, he was told that celestial peaches took hundreds of years to ripen, and that they provided immortality to anyone who ate them; when he was alone among the peach trees, he devoured without any restraint the most beautiful fruits. Later, he was visited by the Yunu, next of Xiwangmu the Empress of Heaven, who came to pick peaches in his garden for the great feast given in honor of the greatest Immortals of Heaven. As he was not on the guest list, he put the next ones to sleep, went to the place of the feast to put the servants to sleep, and gorged himself there on everything he could find there. Drunk, he landed in Laojun's palace and seized the immortality pills that Laojun reserved for the guests of Heaven. Aware of what he had done, he returned to his kingdom, not forgetting to plunder for his little companions what he had found at the feast.

This time, the complaints against the looter never ceased to fall and the Emperor once again had to send his troops to pick up the culprit; but once again he remained undefeated. Breathless, the Great Monarch was visited by Guanyin who recommended that he call on his nephew, Erlang, to defeat the Rebel Monkey. Summoned to court, Erlang came with his men and succeeded where all the others had failed, but helped in this by Patriarch Laojun and the Great Bodhisattva of Compassion. Sun Wukong, finally captured, was subjected to all possible executions, but without any result. Laozi then offered to lock him in his Eight Trigram Oven in order to take away his powers forever and destroy him. When 49 days had passed, the oven was reopened and the Monkey who had hidden there, suddenly appeared and determined to take revenge, decided to ransack everything in Heaven. Enraged, he was confronted by Buddha who challenged him to leave the palm of his hand. Vexed, the Monkey King took up the challenge and lost; the Great Awakened turned his palm and locked the cursed Monkey between his five fingers which he transformed into a mountain, the Wushouzhishan Mountain of the Five Fingers (or Dynamies). Prisoner of a stone chest, the rebel of Heaven had to purge 500 years of captivity, fed iron pills and watered with molten bronze juice by the Shen Spirits of the place, until the monk Sanzang came to deliver him and made him his disciple.

Trained by a Taoist master, he undergoes 72 transformations, but sometimes his tail that protrudes indicates his true nature. He can become giant like any small; turn into an insect. If he pulls one of his hairs, chews it and spits it out, it can multiply to infinity; if he adds blood to it, he can create clones of others as well as of himself. He can jump on the clouds and thus travel 108,000 lilies at once, which allows him to go very far to ask for help during his journey; very strong, he is able to face an entire army, but can sometimes be overtaken. Having survived after 49 days the destructive fire of the divine furnace at the Eight Trigrams of Laozi, his eyes have earned the gift of recognizing the polymorphic demons under their different avatars. Thanks to the sacred flames of the stove, he acquires the transcendent vision that will earn him the nickname: Eyes of Fire and Golden Pupils.

This is what sometimes leads him to some disputes with his master Sanzang, who struggles to believe him, but he himself admits his limits.
: he no longer fears fire since his misadventure in Laozi's oven, but he has kept a weakness and a fear for smoke

it can see up to 1,000 lilies during the day and only 300 at night. To control his immeasurable energy and channel his bellicose character, he makes him wear a golden headband given by the Bodhisattva Guanyin, who by reciting a prayer, can shrink and, thus, inflict great pain on him by compressing his head, if his actions prove contrary to the "precepts of the Buddha" and Buddhist principles.