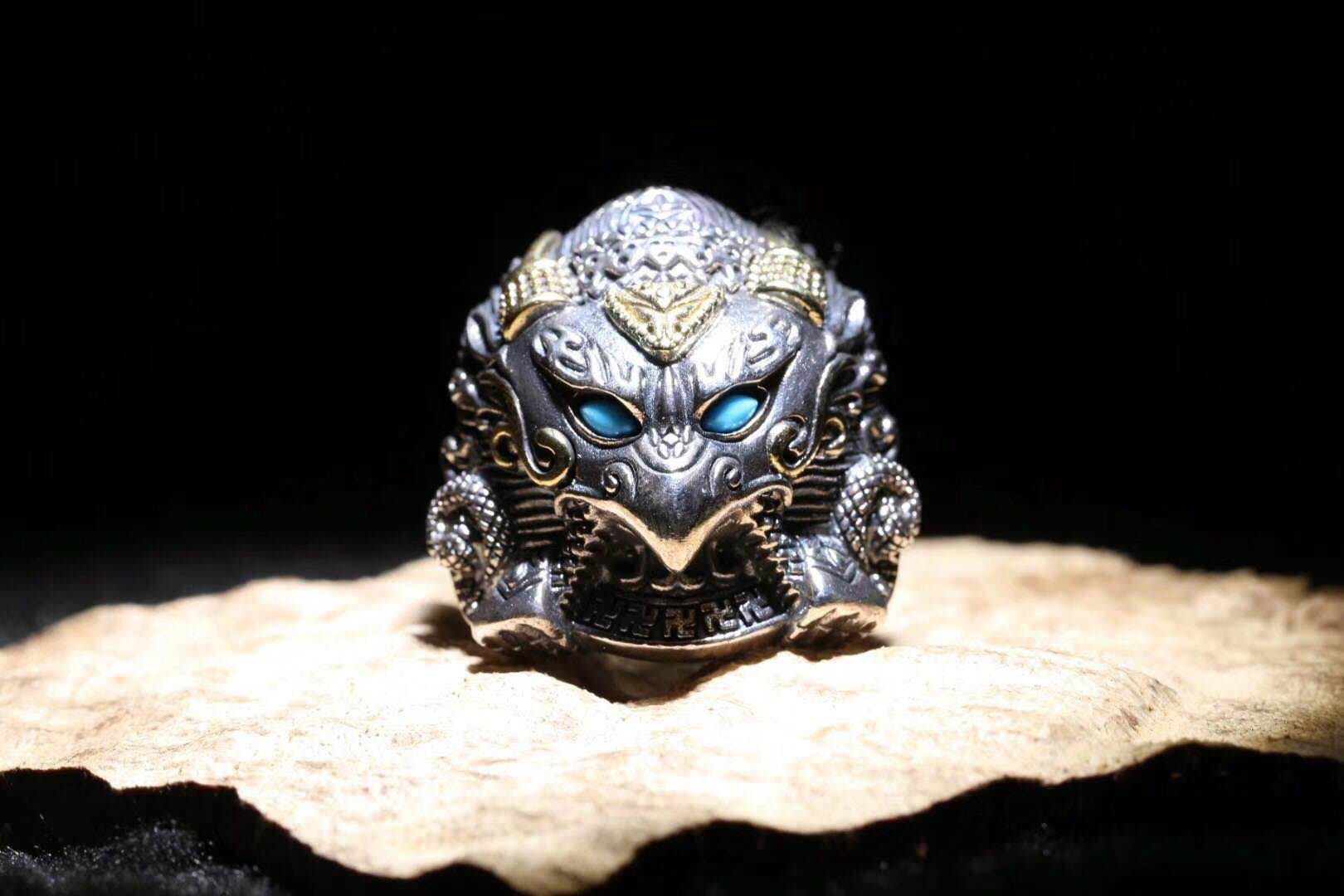 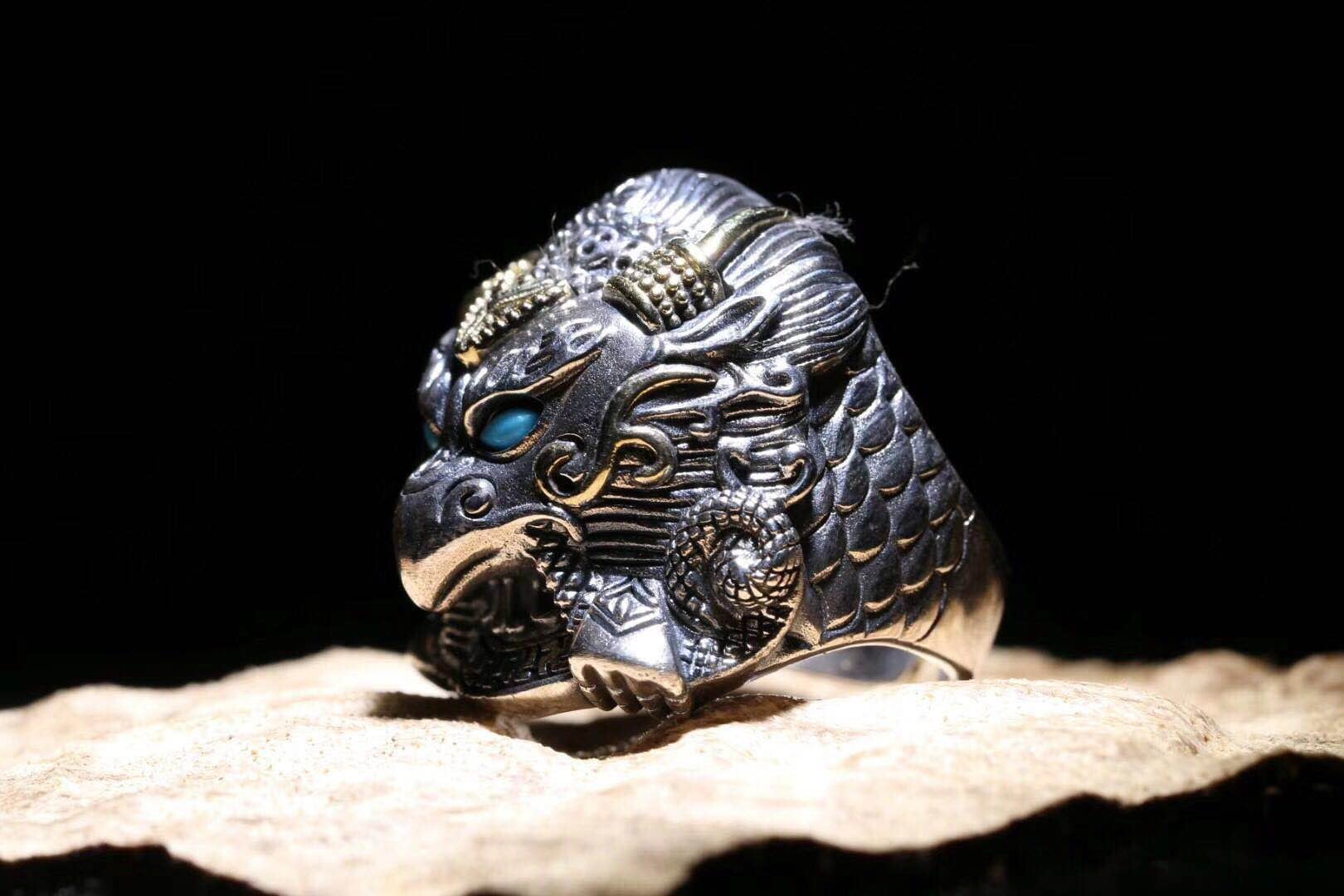 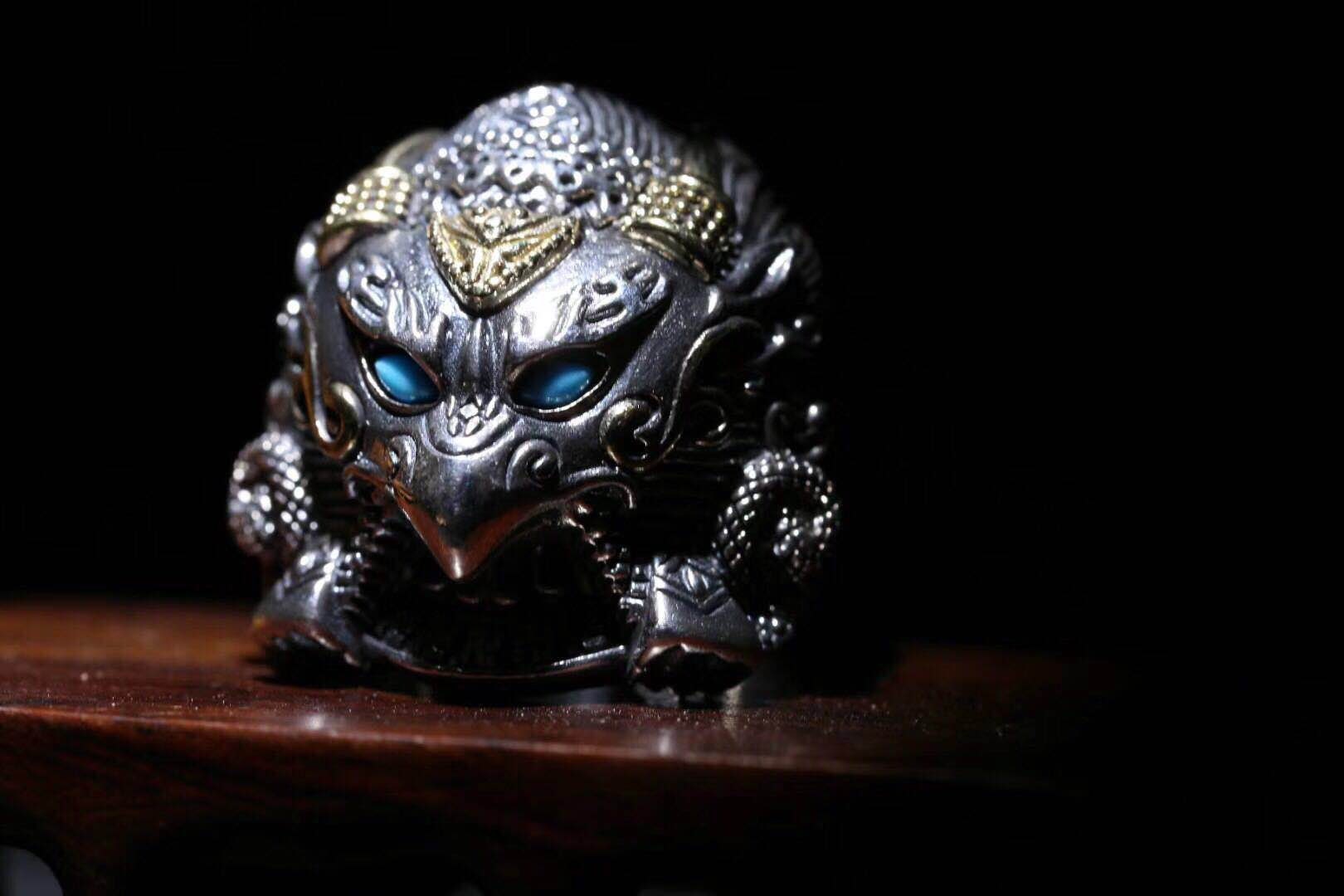 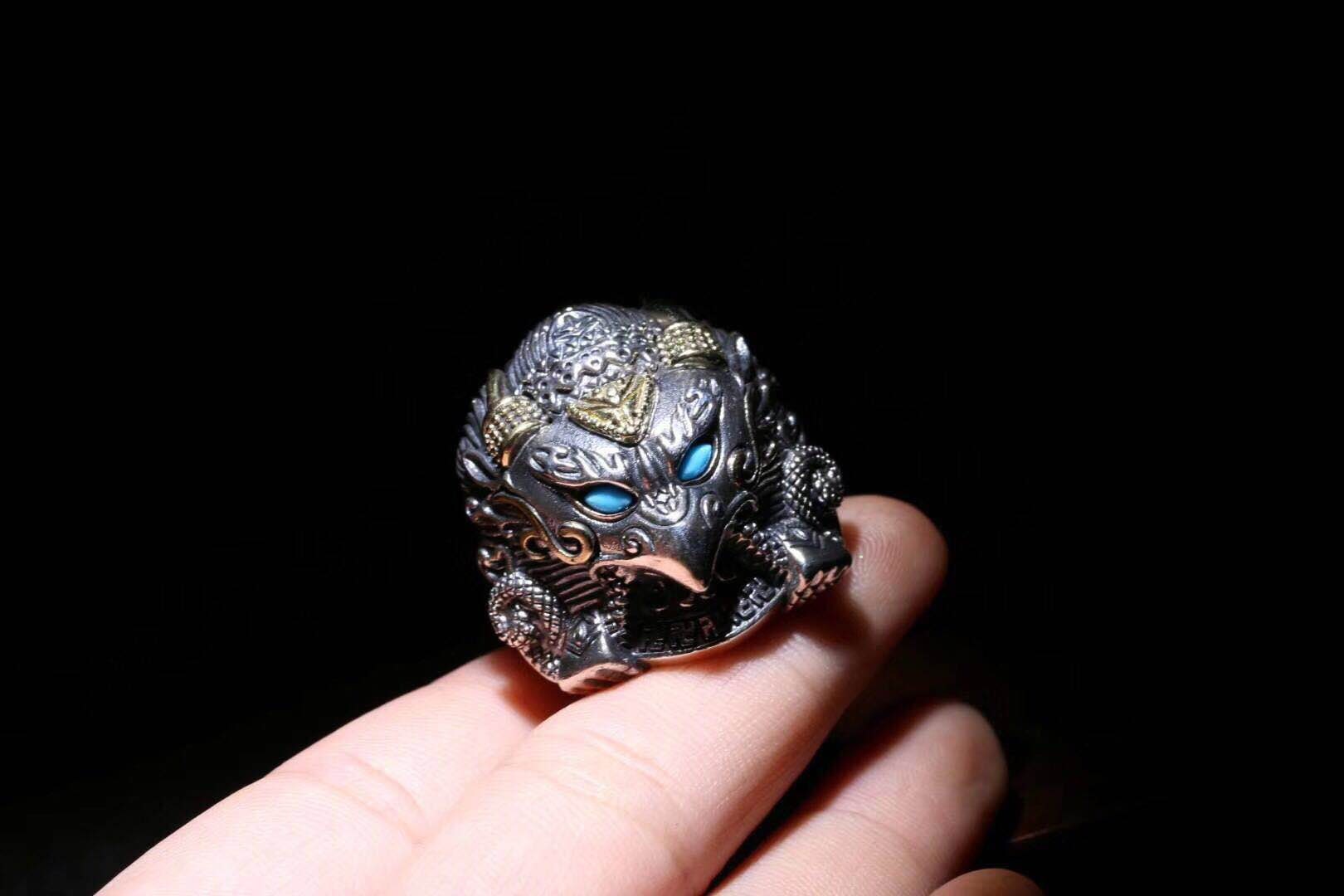 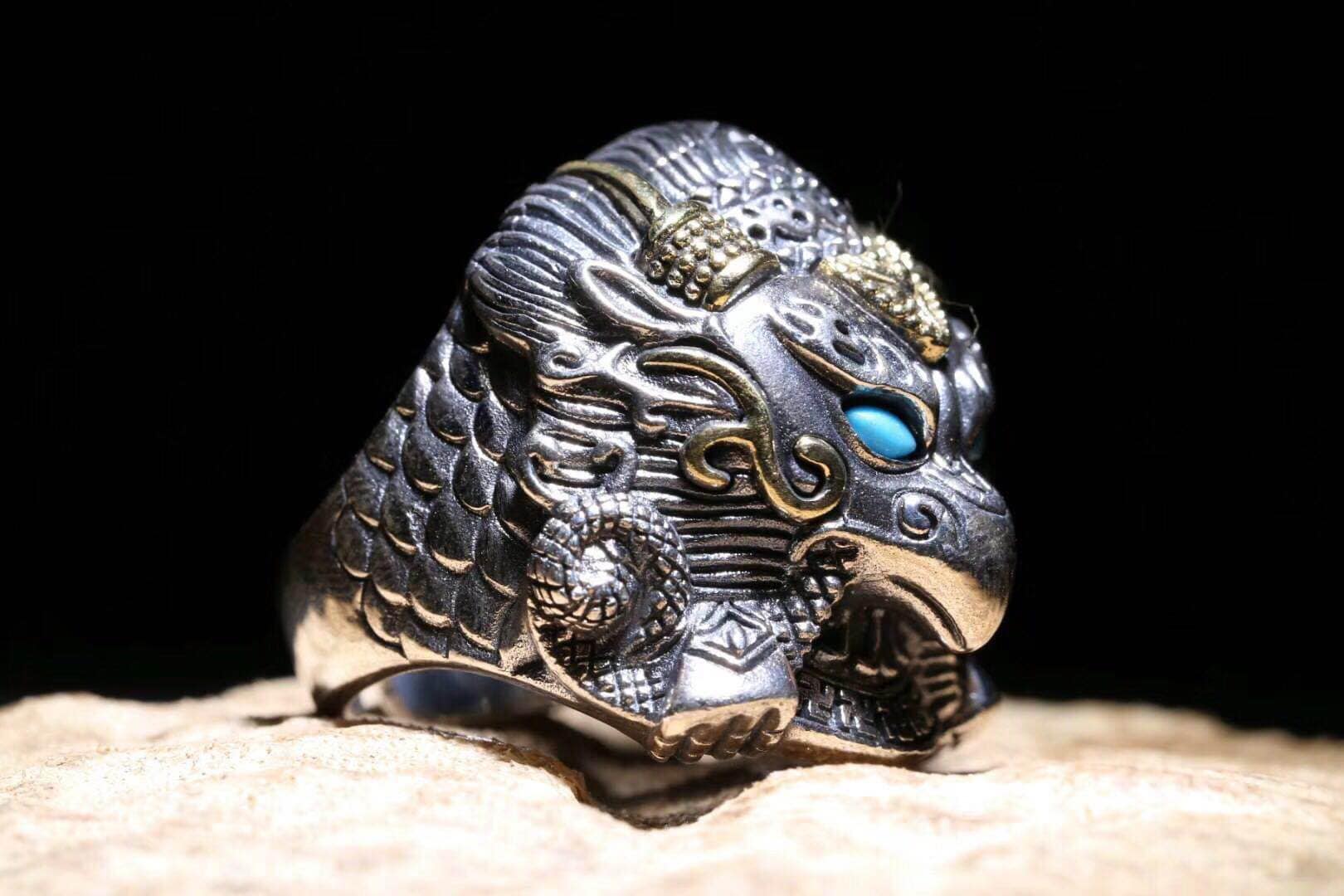 Buddhist ring in silver 925, bronze and turquoise Garuda
about 30 grams of silver 925
Turquoises from Hubei province.
Open ring so adjustable to all sizes.

Garuda, fabulous bird man of Hindu and then Buddhist mythology, son of Kashyapa and Vinatâ and brother of Aruna, the driver of the chariot of the god Sureya. It is the vâhana, or mount, of the god Vishnu in the Hindu religion, adopted by Buddhism as protector of the law.
He is also considered the king of birds.

A class of semi-divine beings with wings and the beak of a bird of prey, a mortal enemy of the naga, of which only those with a Buddhist relic or converted to Buddhism can escape it.

Willingly represented in The Buddhist art of Cham and Khmer, as well as in Java, rare in Japanese art where their effigy is extremely rare (at the Kofuku-ji of Nara and the Sanjûsangendô of Kyoto). They are then shown as men in armor, with a bird's head and playing the flute. Sometimes, as in Kôfuku-ji, a bird's head is simply placed as a hairstyle on their man's head. This last representation is also called Konjichô.
In painting, the Japanese Karura affect the shape of a human-headed bird, walking on snakes or holding two of this in their hands. They have a ferocious expression.

The Karura-ô; considered one of the 28 messengers of the avalokitesvara bodhisattva (Jap. Bustu Kanon, chin. Guan yin) is the king of the Garuda, winged warrior playing the flute, sometimes with a bird's head, spiky hair.

Vajrayaksha, king of magical sciences, considered the leader of the great bodhisattva, a terrible manifestation of Amoghasiddhi in the north, and an offshoot of Samantabhadra in Japan, sometimes assumes a form of Garuda.

In Tibet, Khyung is the Tibetan name for Garuda. These beings took on importance in the Tibetan vajrayana where they were assimilated to the Khyong, golden horned eagles, important deities of the bonp pantheon, practiced in healing rituals against diseases caused by the lous (Klu, assimilated to the nagas).
When he came to establish the temple of Samye, Padmasambhava took the form of a Garuda to subdue a malevolent praise preventing the construction from ending.
Many of Padmasambhava's termas include Garuda sadhana, mainly for medical or healing rituals.
There are also rituals of Red Garuda (Tib, Khyung dmar-in) and Black Garuda (Tib. Khyung dmar-po), deity of the nyingmapa school, more or less angry.

Red Garuda is depicted as the king of wrathful, molten iron color, with a beak and greenhouses in celestial iron, in the middle of a flame enclosure. His forehead is adorned with a flamboyant jewel and from among his feathers emerge garuda of fire, like so many sparks crushing Naga and Nyen.
He stands on a sun, on all the forces of ignorance and diseases depicted by a carpet of snakes personifying the twelve dependencies of dependency.
In his hands, he holds a colorful snake that personifies the naga of the four classes.
Its diamond wings are wide open and beat with noise, terrifying the eight classes of gods and demons.

He is represented in the iconography of Shambhala by Chogyam Trungpa for whom he is associated with significant speed and power. Like the phoenix, it rises from the ashes of destruction, it is indestructible.