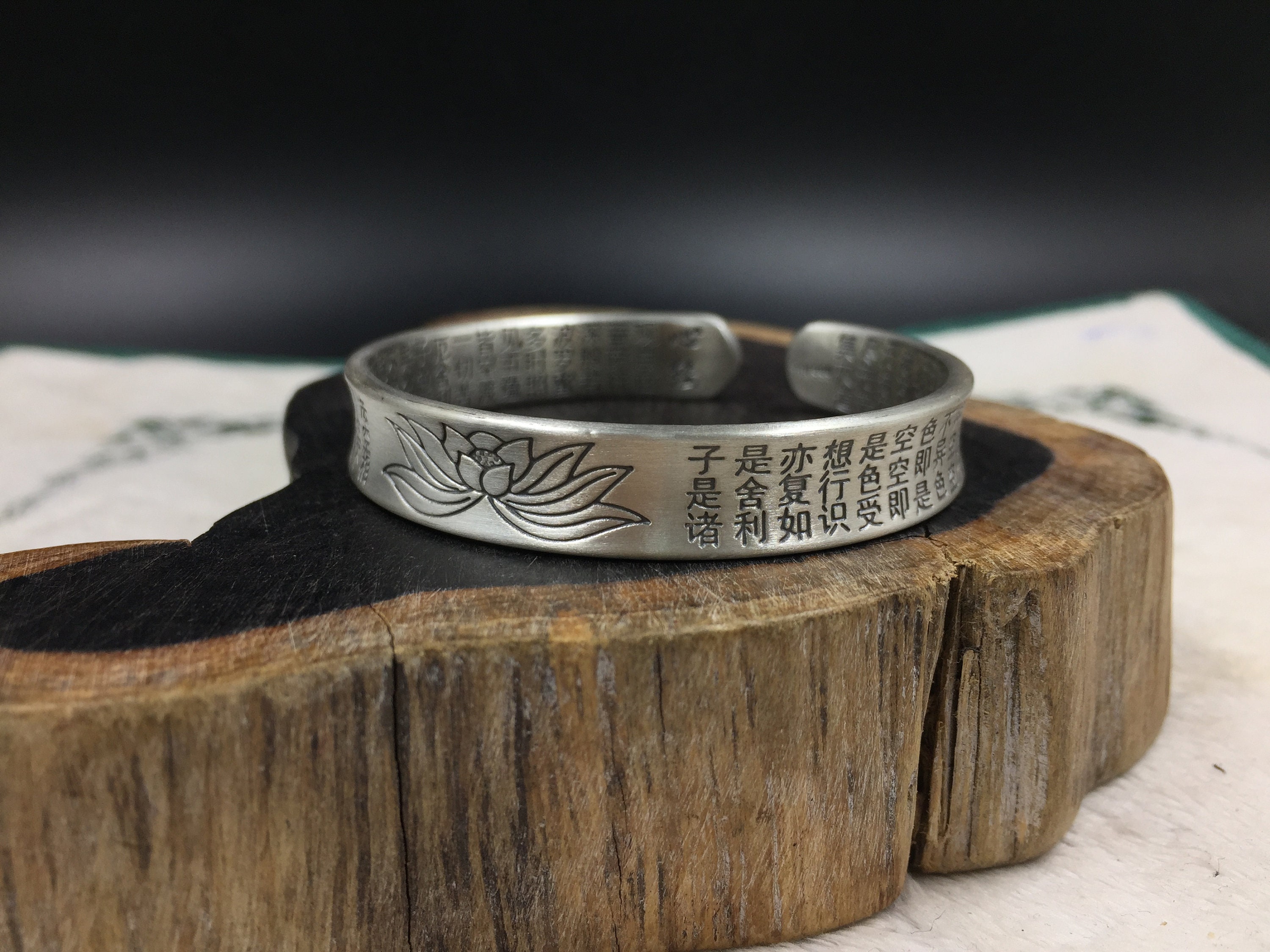 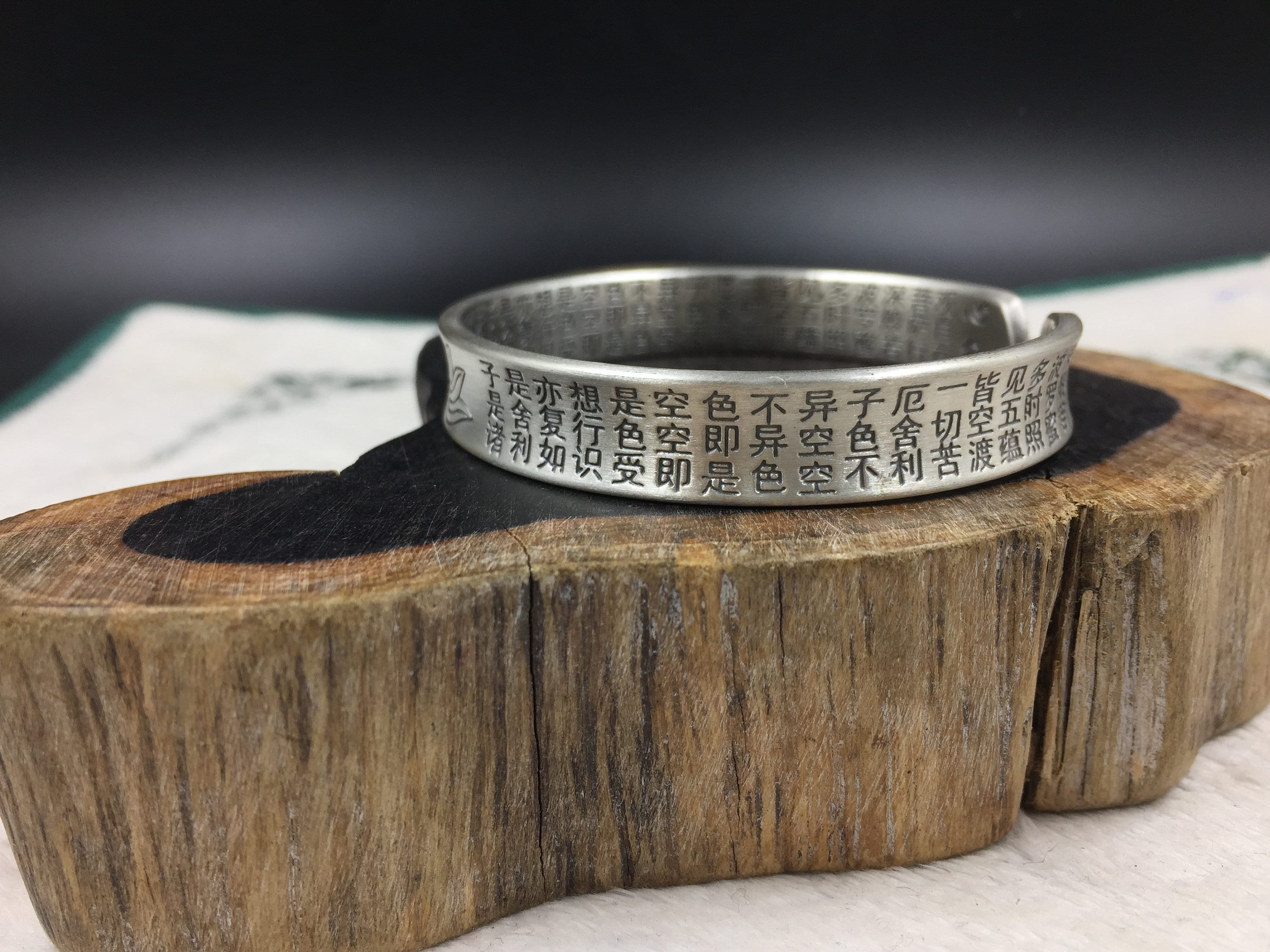 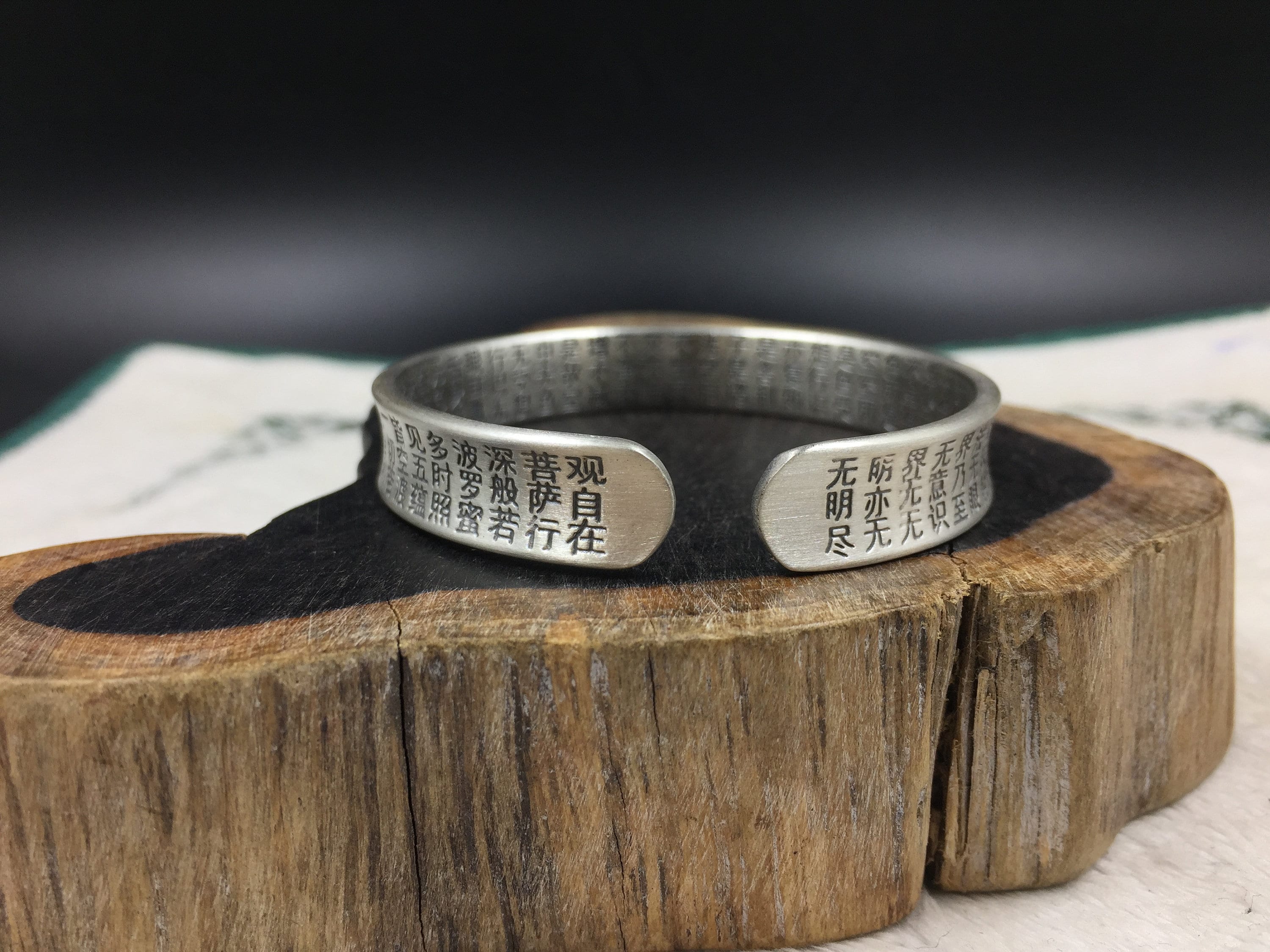 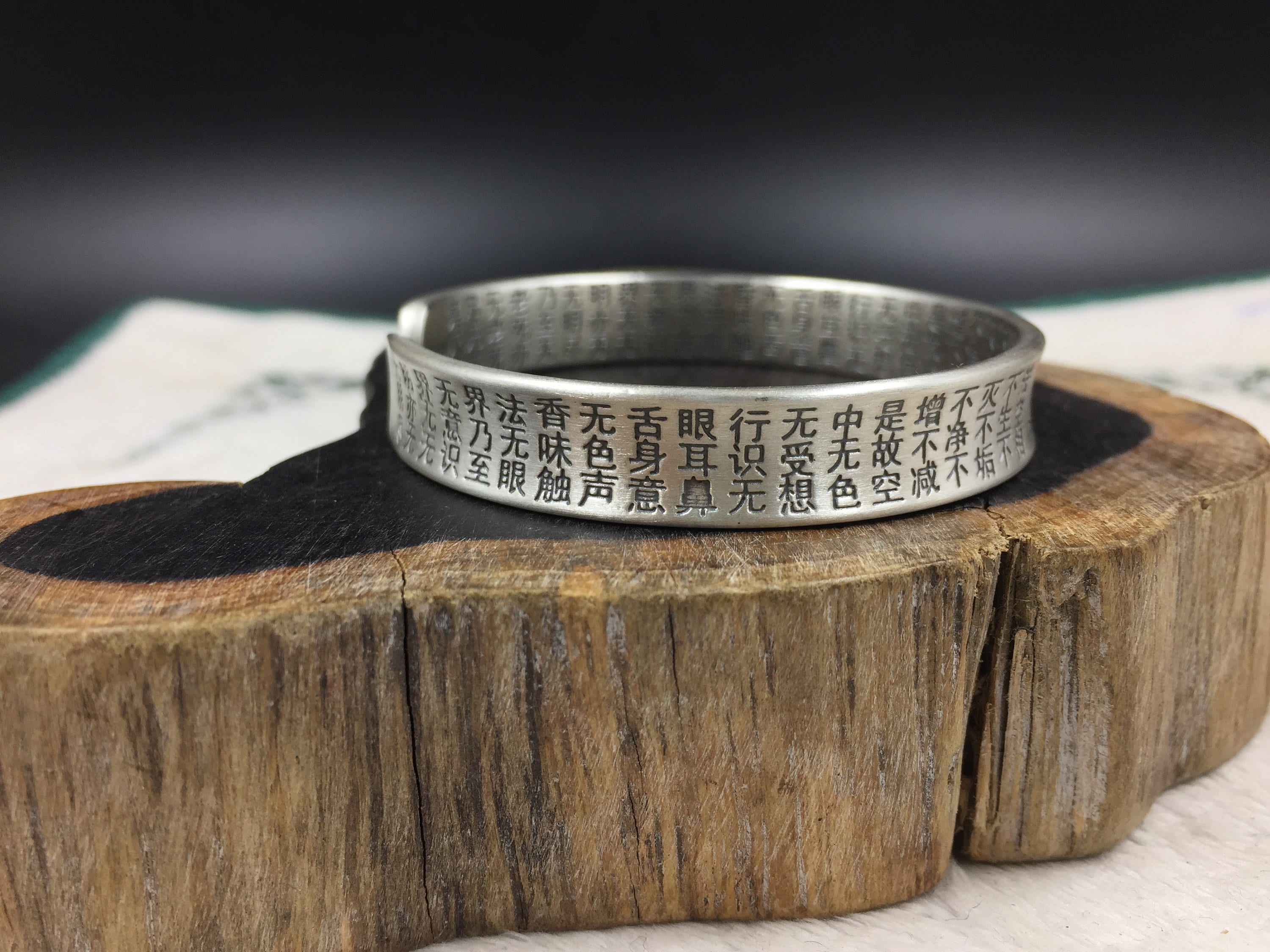 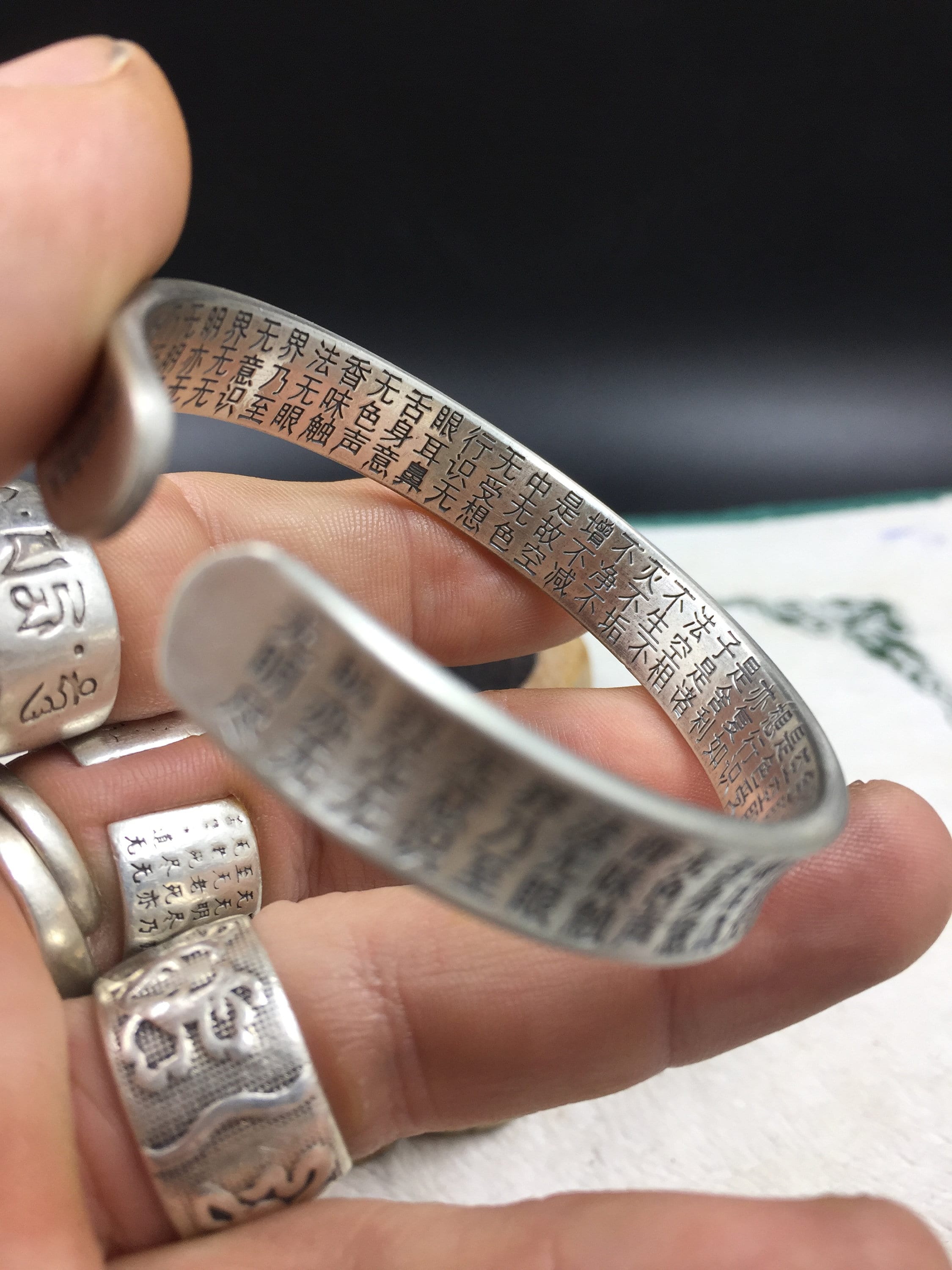 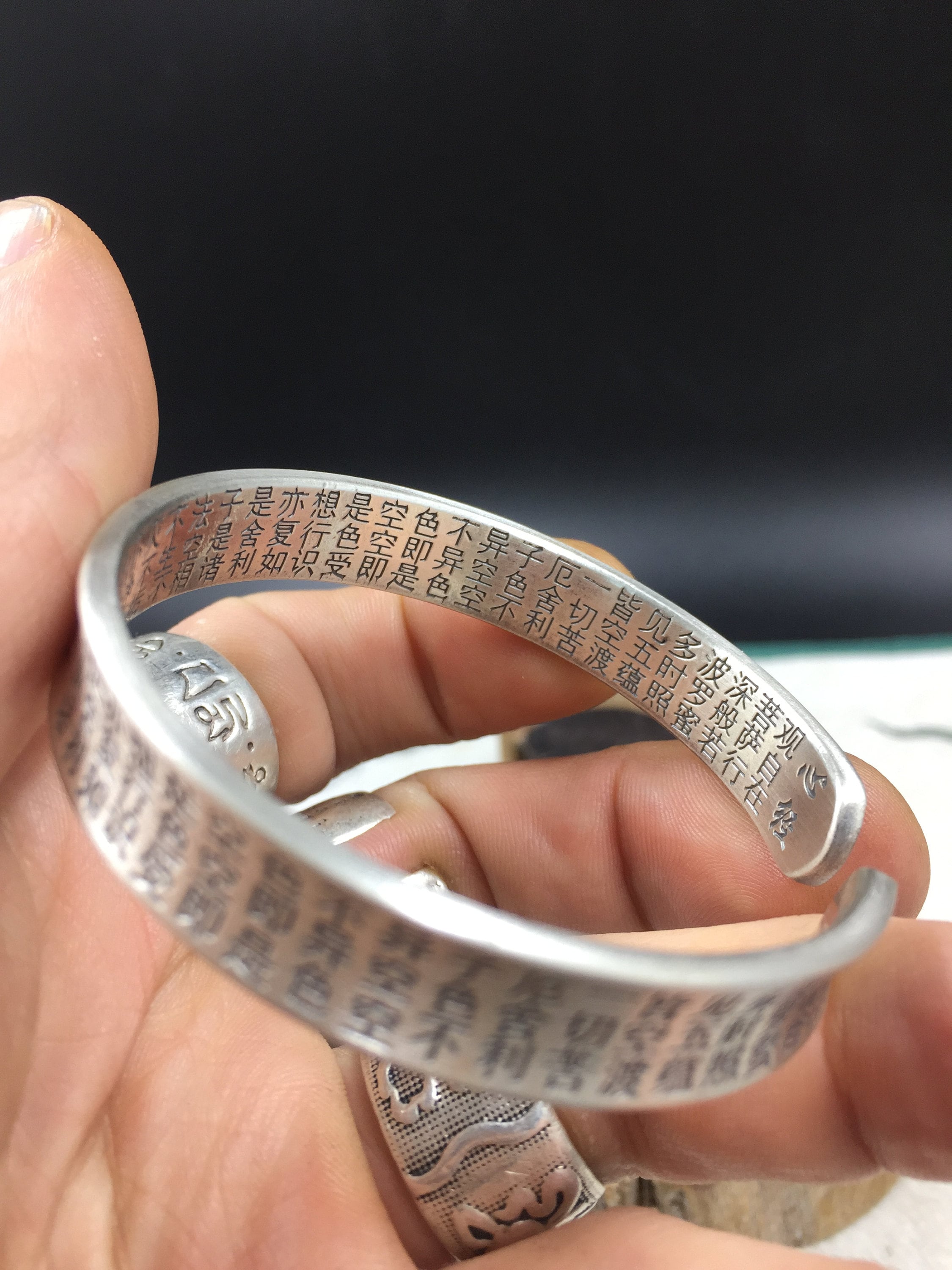 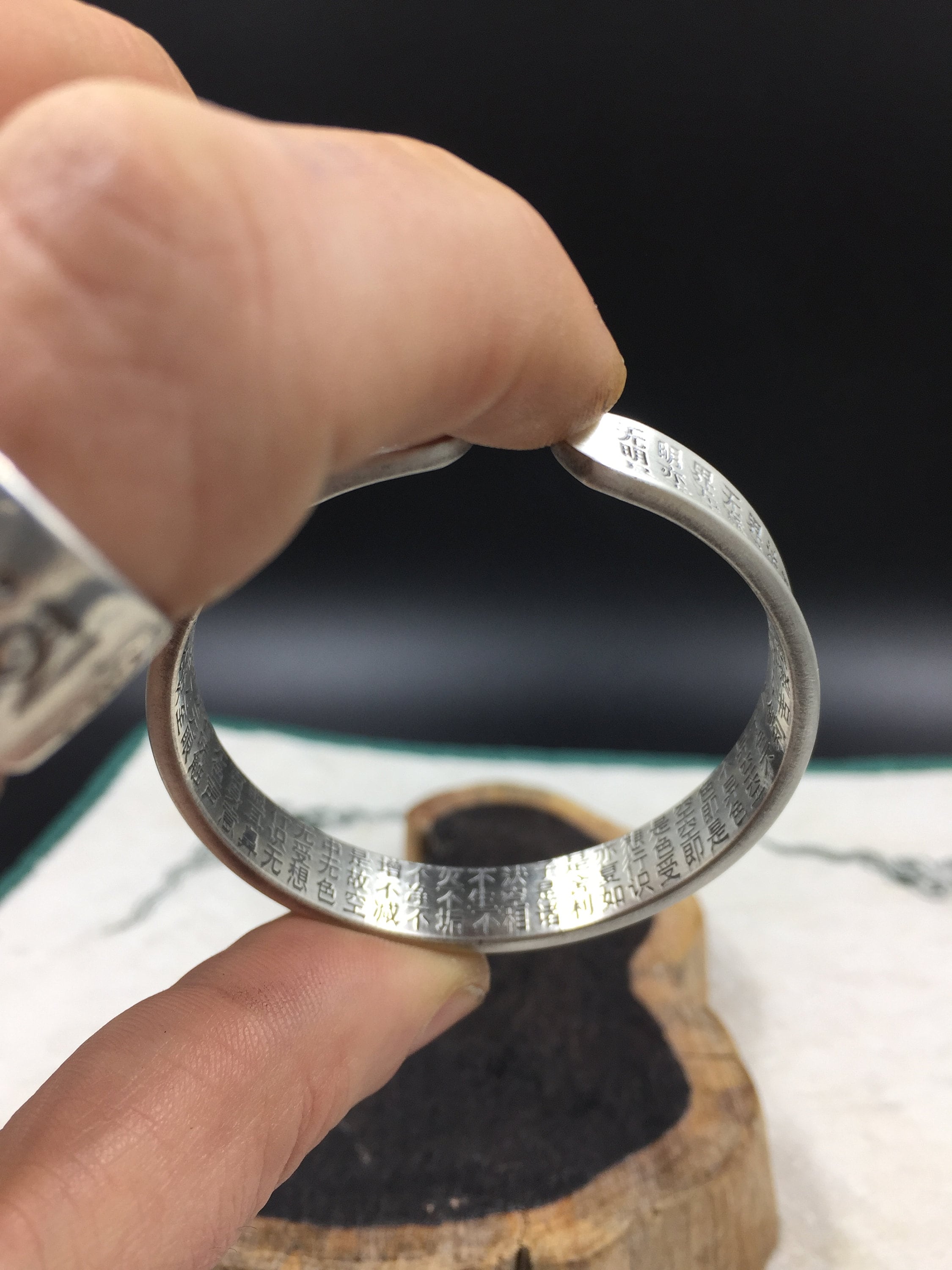 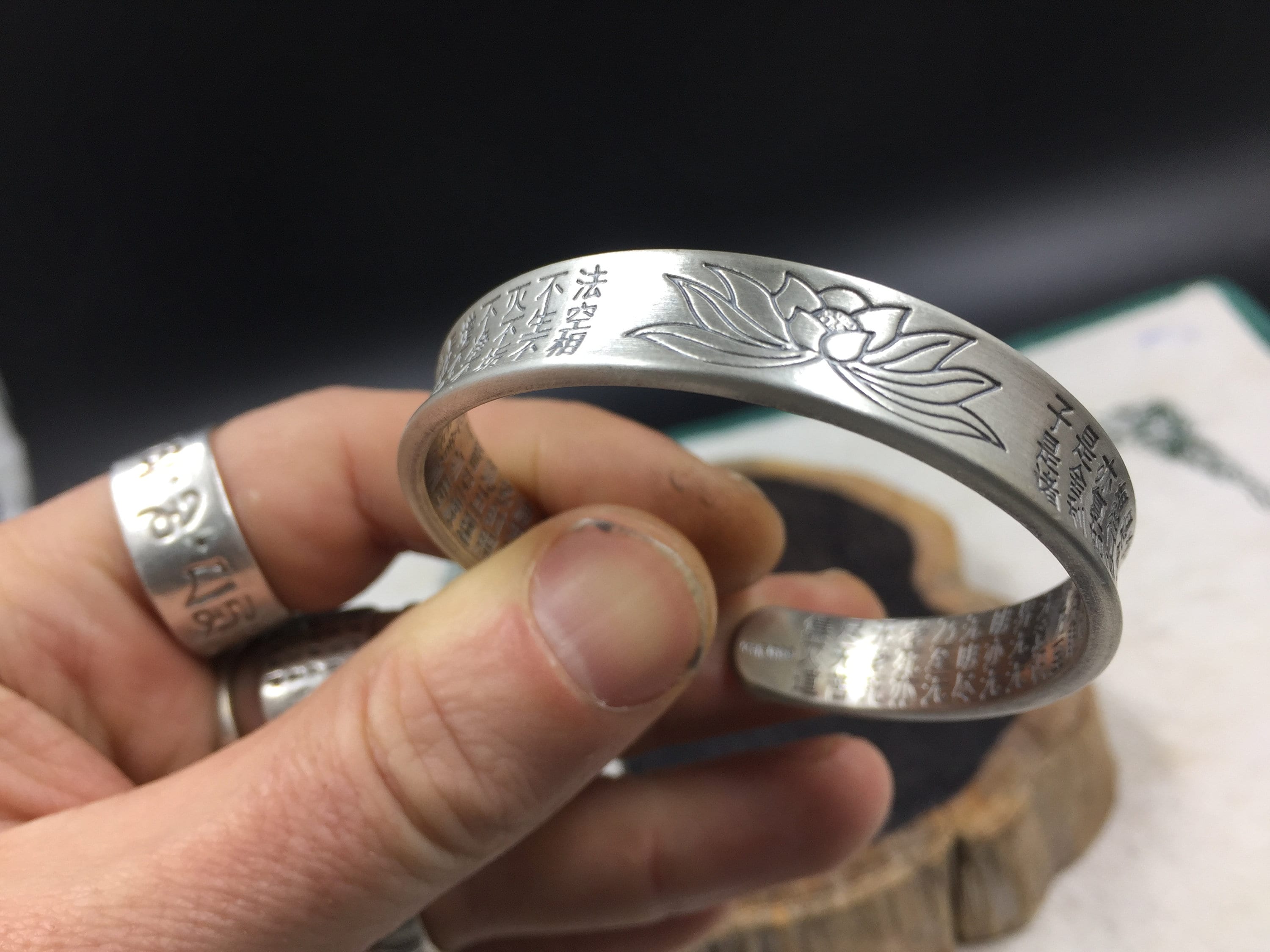 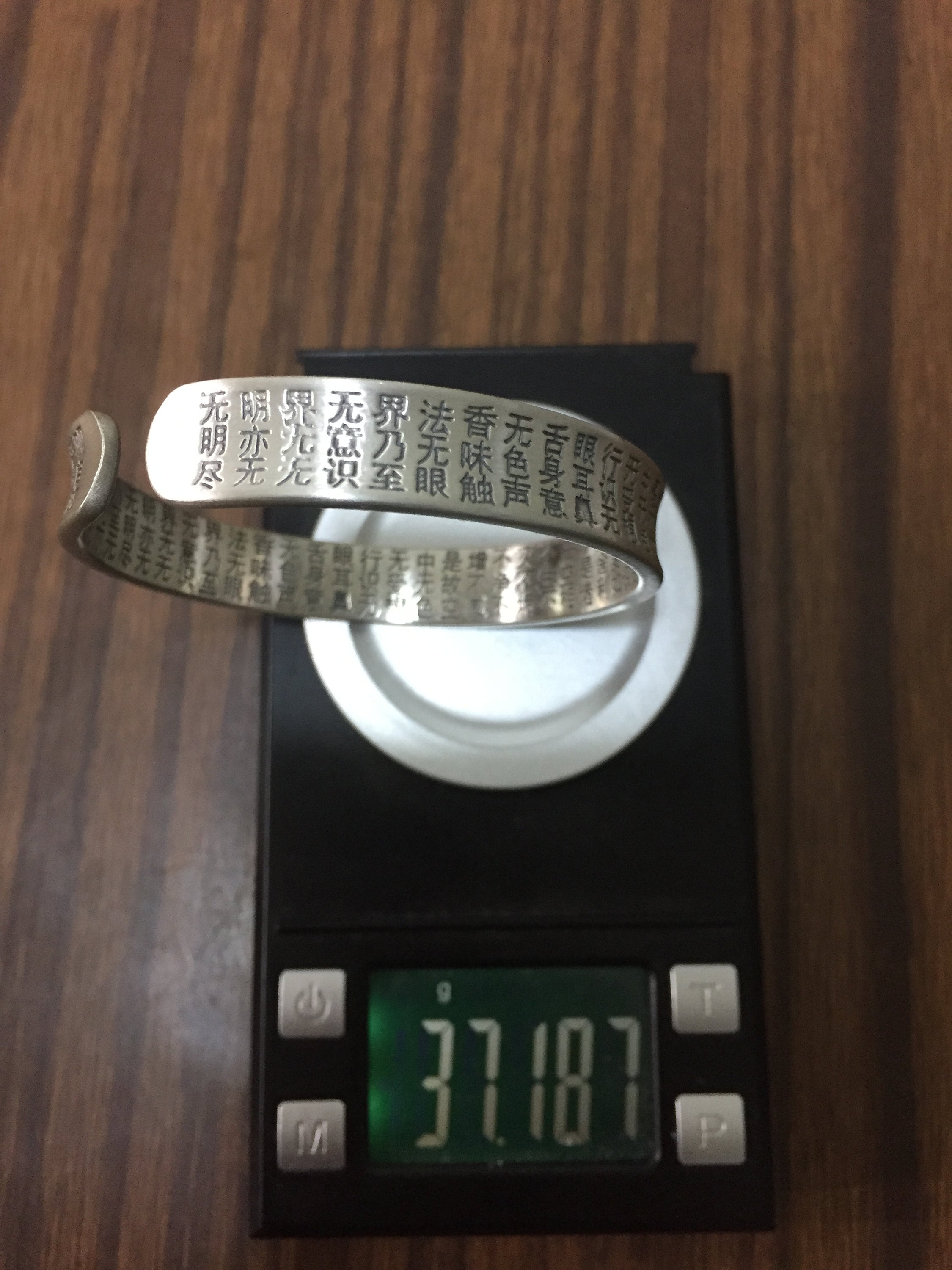 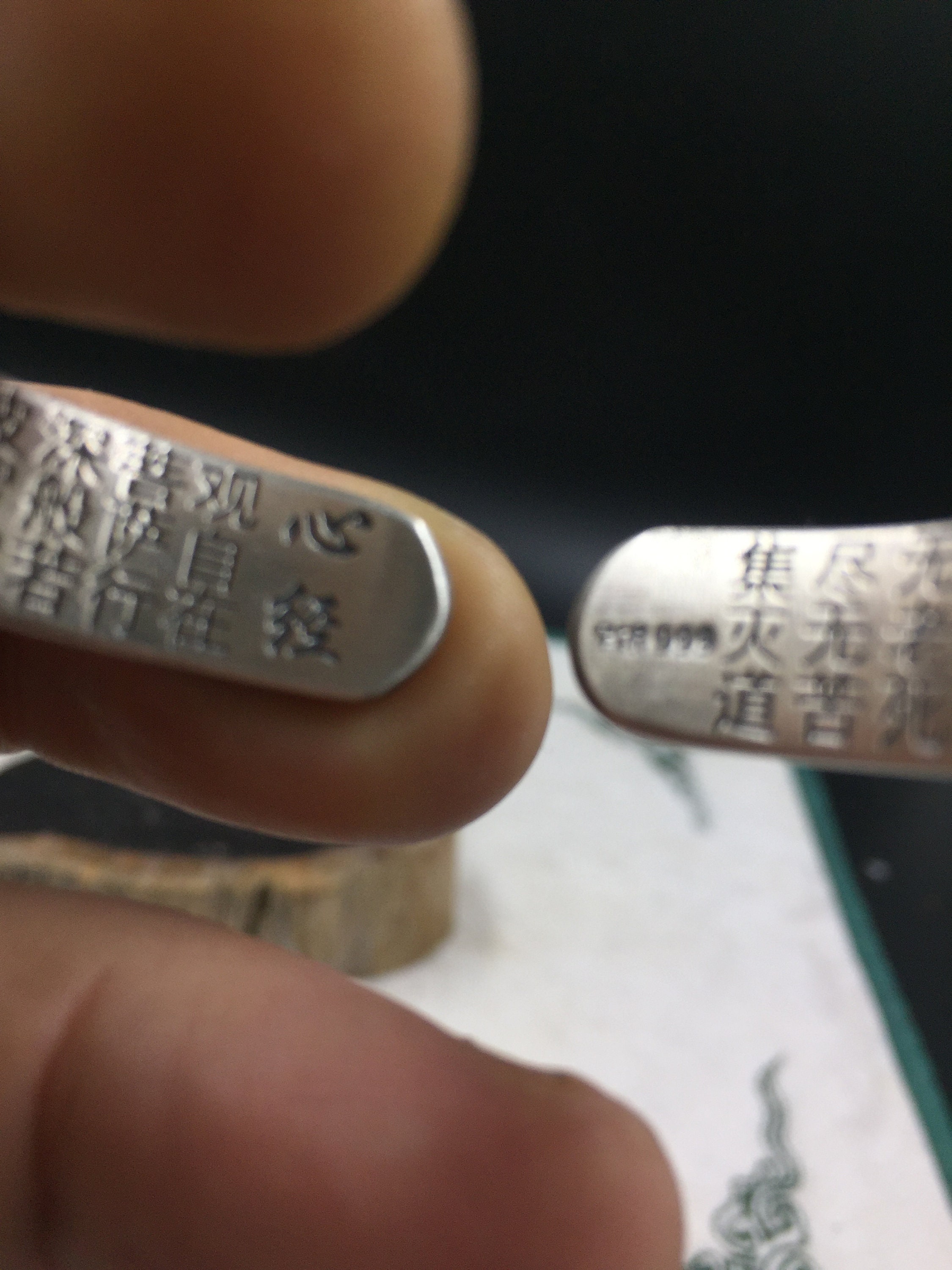 Weight 37.15 grams is slightly less than €4 per gram.
Open bracelet adjustable to all wrists.

The Sutra is engraved both outside and inside this bracelet.

The Sutra of the heart is the smallest existing Buddhist Sutra, of which here is the translation in French.
Tribute to the Arya Triple Gem!

So I heard. One time the Bhagavan was in Rajagriha, on the vulture peak, surrounded by a large Congregation of monks and a great Assembly of bodhisattvas. At that time, the Bhagavan was absorbed in the concentration on the categories of phenomena, called "deep perception".

At the same time, the bodhisattva mahâsattva Arya Samaj Avalokiteshvara gazed the very practice of the profound perfection of wisdom and he saw that the five aggregates also were empty in nature.

Then, by the power of the Buddha, the venerable sharipoutra addressed himself in these terms to the bodhisattva mahâsattva Arya Samaj Avalokiteshvara:

"The sons and daughters of the lineage eager to practise the profound perfection of wisdom, how should they go about it?"

The bodhisattva mahâsattva Arya Samaj Avalokiteshvara then replied to the venerable sharadvatiputra: "shariputra, the sons or daughters of the lineage who wish to practise the profound perfection of wisdom must consider it in the following way: they must contemplate, correctly and repeatedly, the fact that the five aggregates, too, are empty in their own nature.

Shariputra, so all phenomena are vacuity; they are without characteristic; they are not born or cease; are neither soiled nor uncontaminated; or deficient; nor perfect.

As a result, Shariputra, in emptiness there is no form, no sensation, no identification, no compound factors, no conscience; no eye, no ear, no nose, no tongue, no body, no mind; no shape, no sound, no smell, no flavor, no object of touch, no mental phenomenon. From the element of the eye and so on, up to the element of consciousness of the mind, there is no element. There is no ignorance or elimination of ignorance and so on, until there is no ageing and death, nor elimination of ageing and death. And in the endorsement [unclear], there is no suffering, no origin of suffering, no cessation, no way; There is no transcendent wisdom, neither obtaining nor non-obtaining.

Shariputra, thus, since there is no obtaining, the bodhisattvas rely on the perfection of wisdom and they dwell in it, the spirit without veil and without fear. And as they passed far beyond any mistake, they reach the final stage of the Nirvāṇa. It is by relying on the perfection of wisdom that all the Buddhas of the three times also give rise fully to the insurmountable awakening perfectly accomplished.

Tadyathā [oṃ] gate gate pāragate pārasaṃgate Bodhi svāhā (go, go, go beyond, beyond the past, that awakening is realized!)

Sharipoutra is how a bodhisattva Mahâsattva must practise the profound perfection of wisdom. "

Then the Bhagavan went out of his concentration and praised the bodhisattva mahâsattva Arya Samaj Avalokiteshvara by saying, "well! Ok! O sons and daughters of the lineage, this is so, it is well so. It is exactly as you have just said that it is necessary to practise the profound perfection of wisdom and the tathagatas themselves rejoice.

When the Bhagavan had said this, the venerable sharadvatiputra, the bodhisattva mahâsattva Arya Samaj Avalokiteshvara, the entire Entourage, as well as the world of gods, men, Asura and gandharvas, were filled with joy and praised the words of Bhagavan.