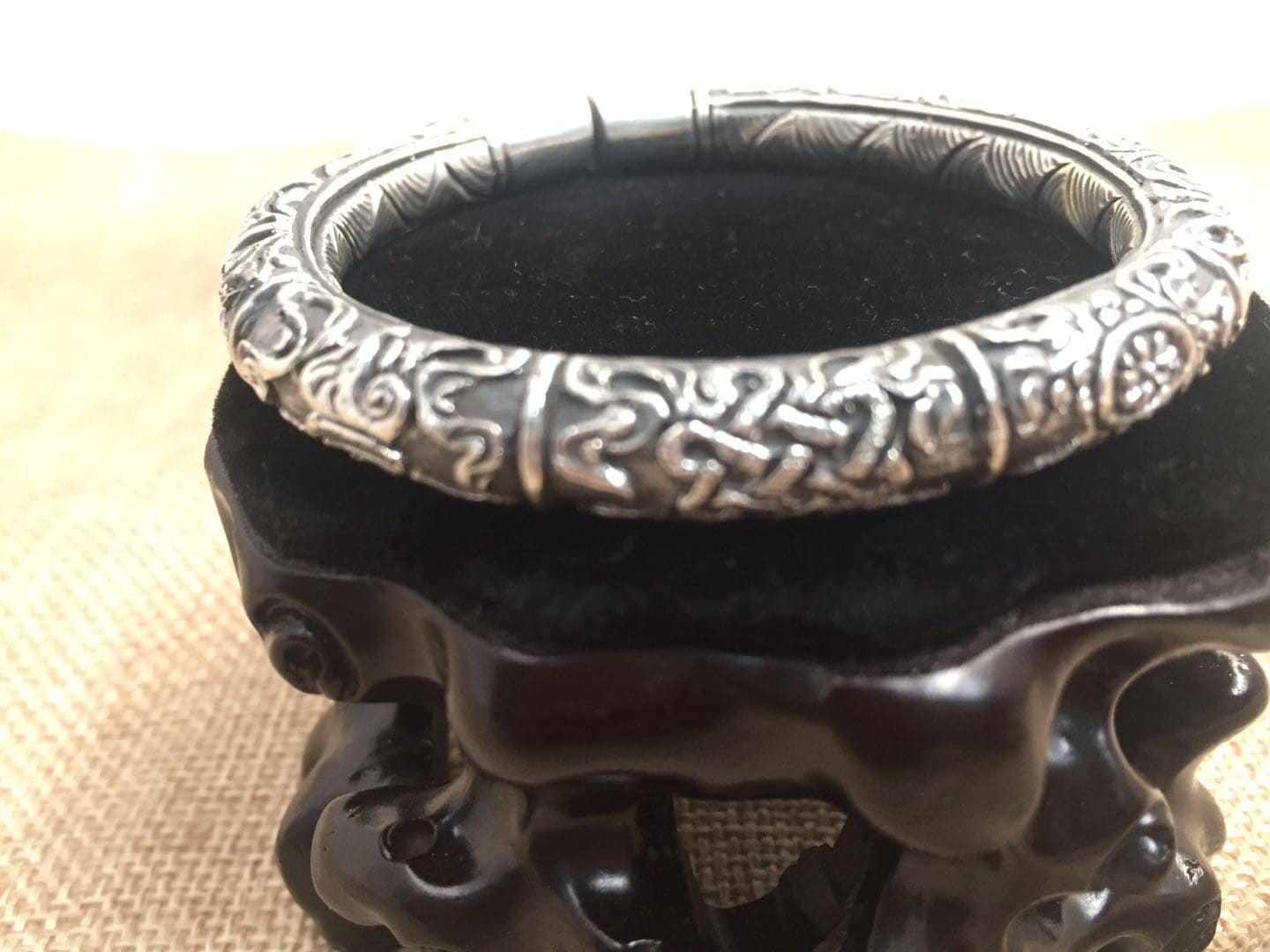 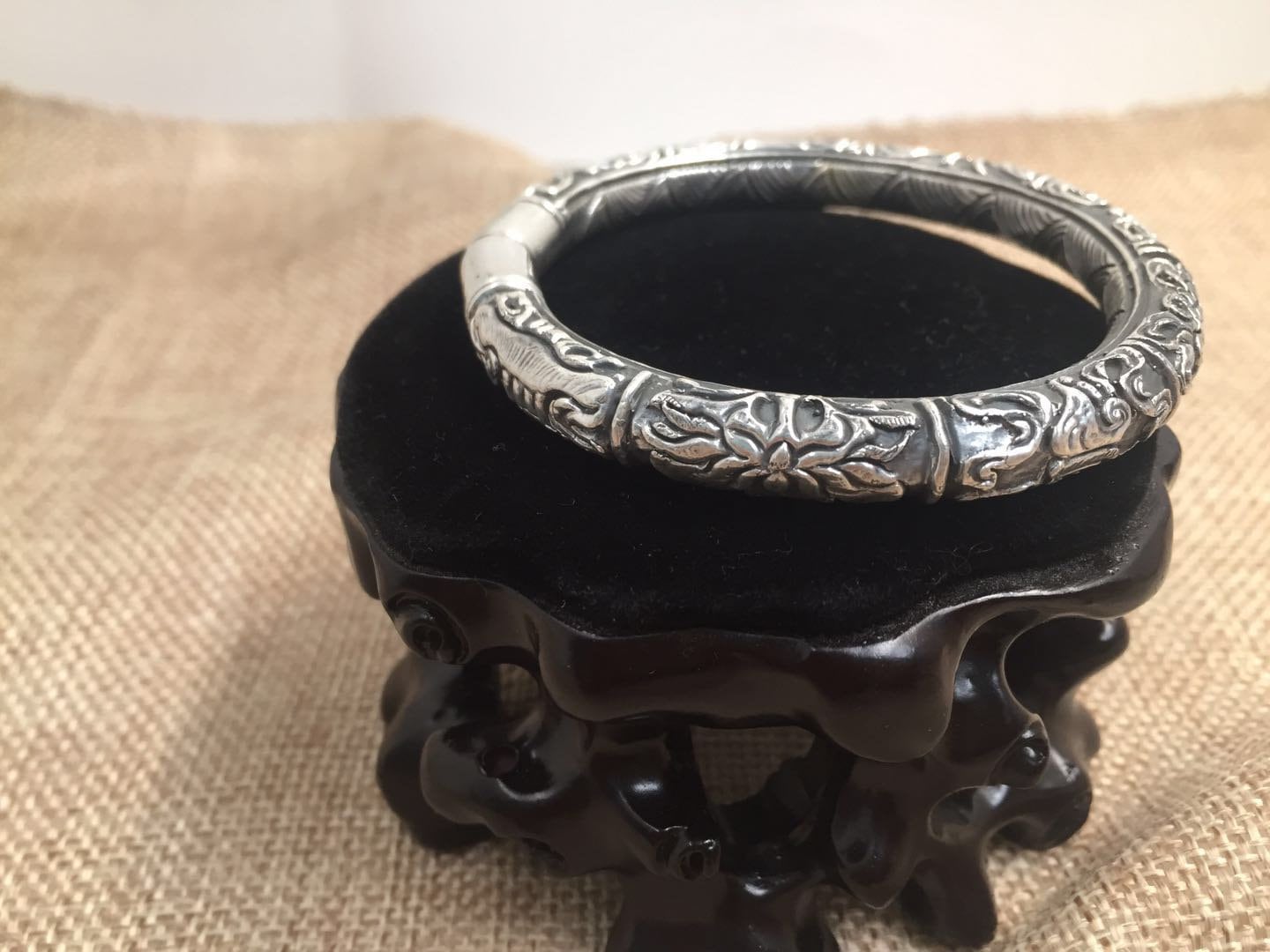 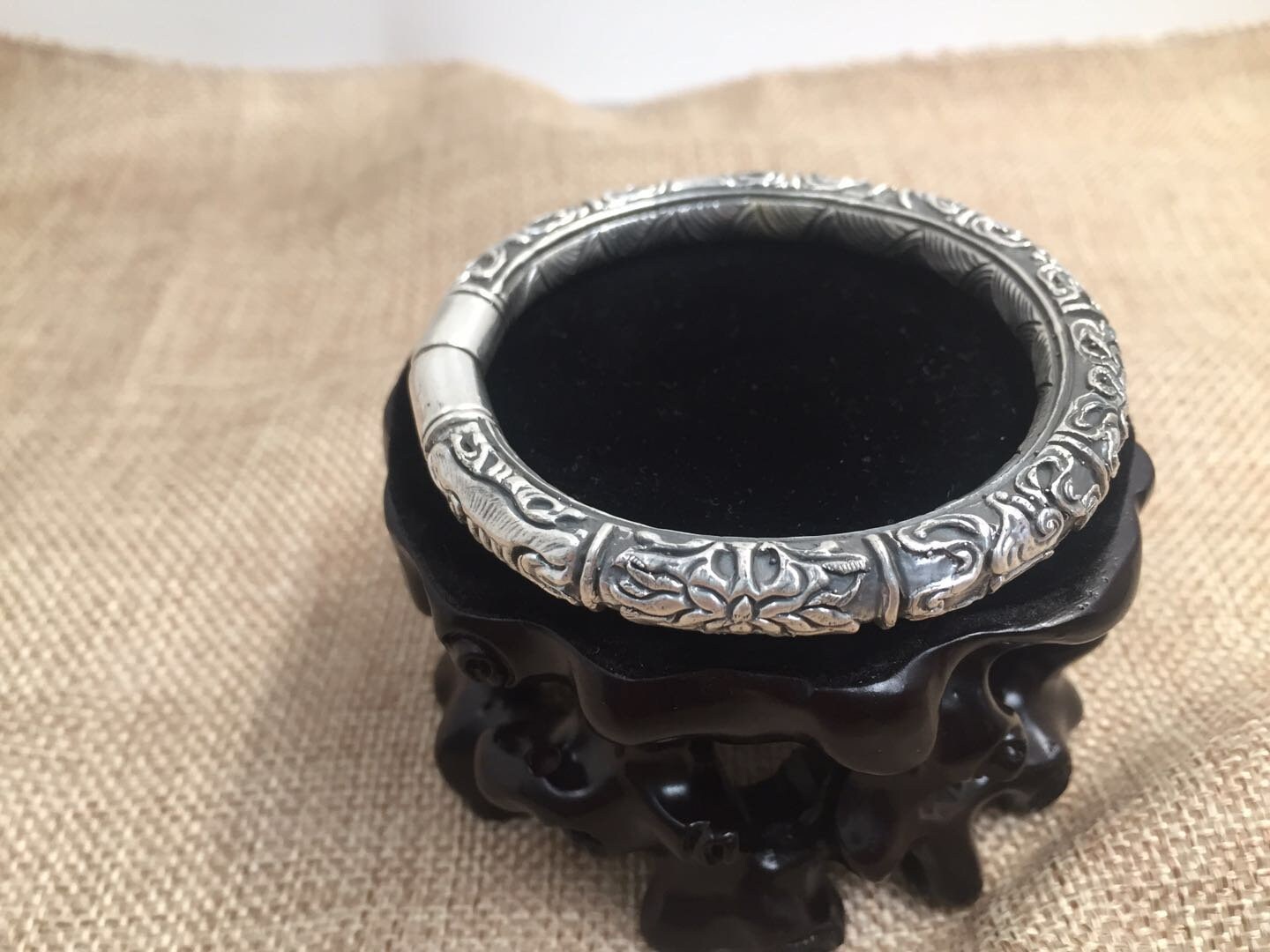 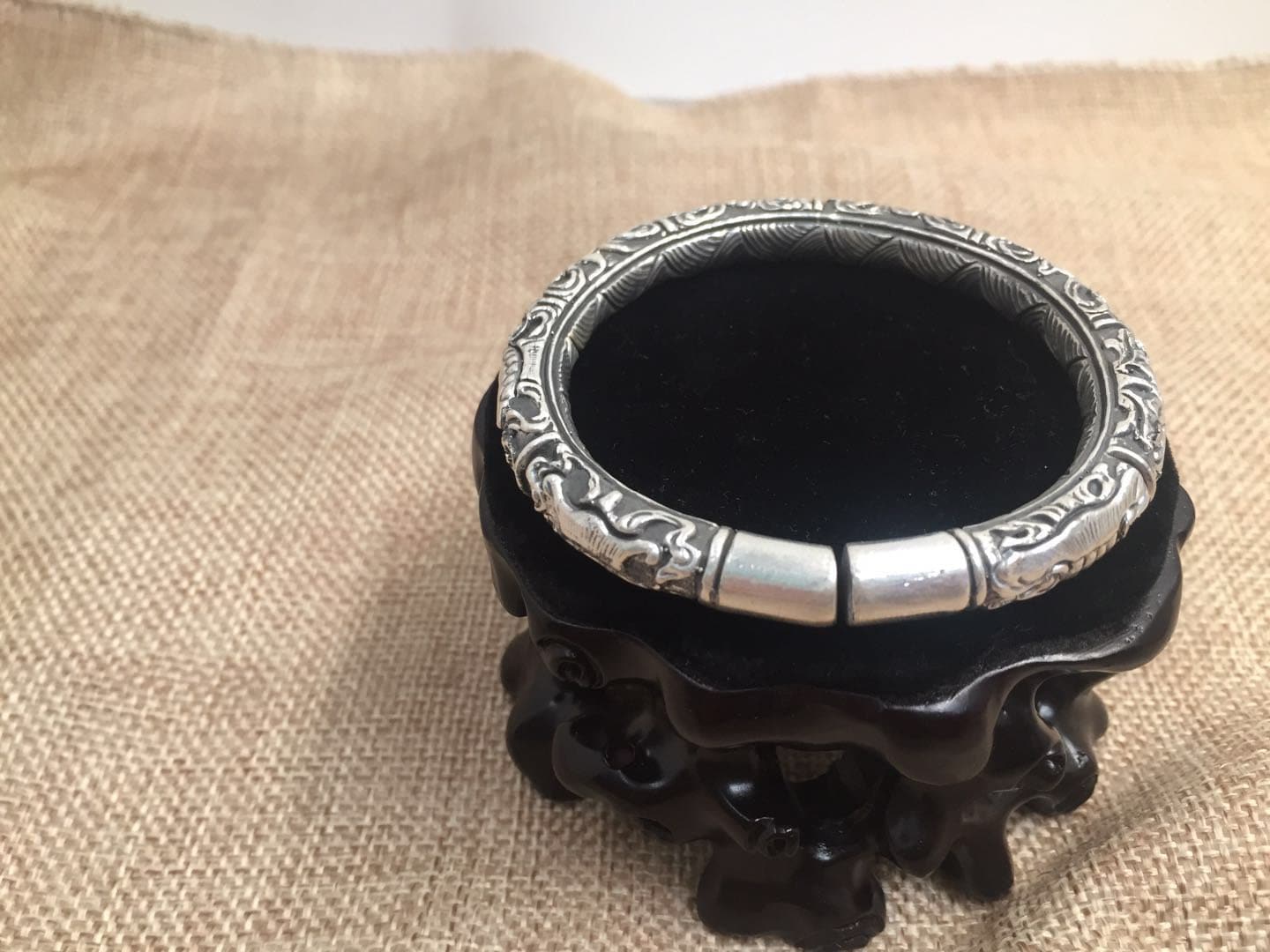 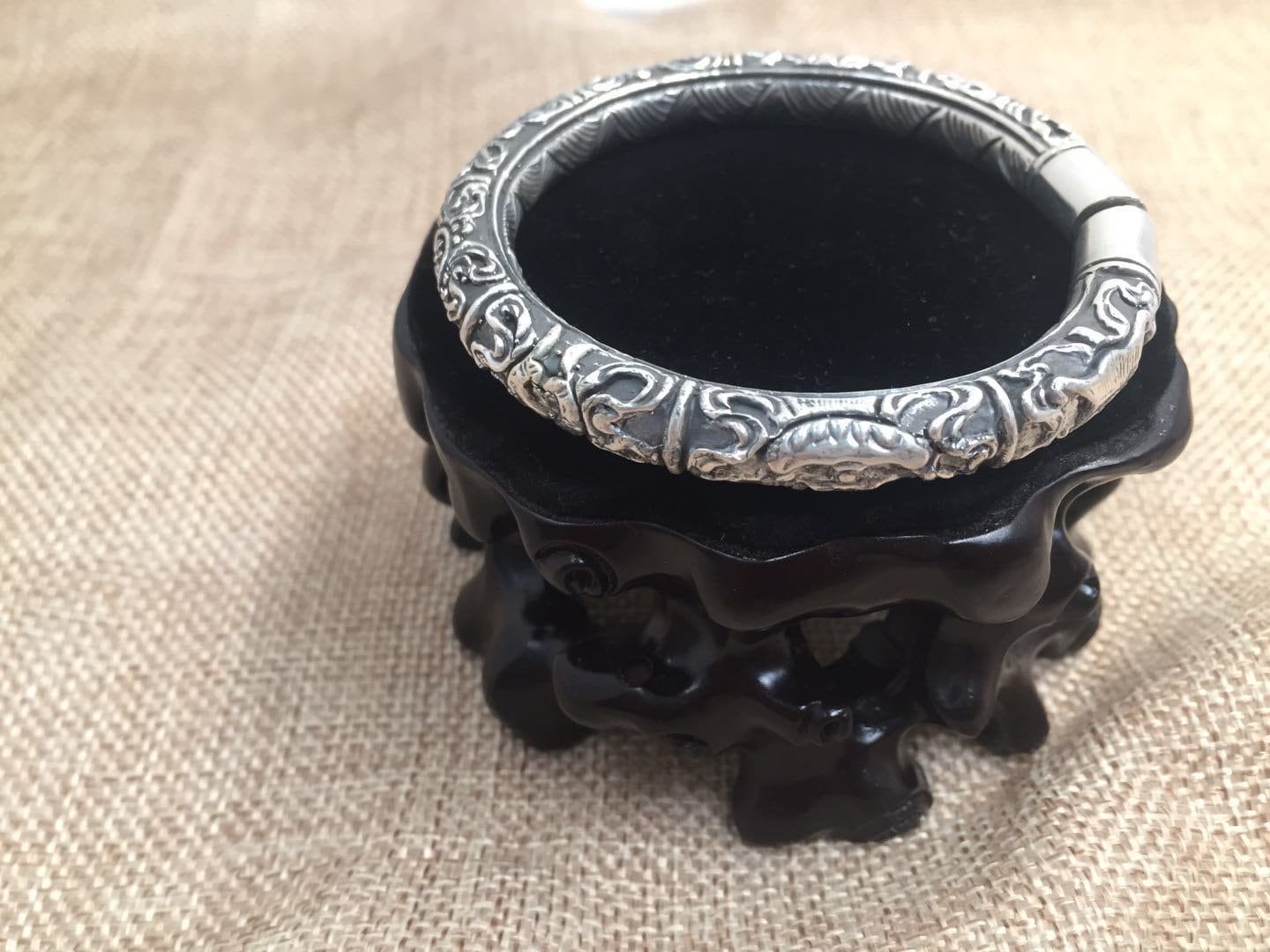 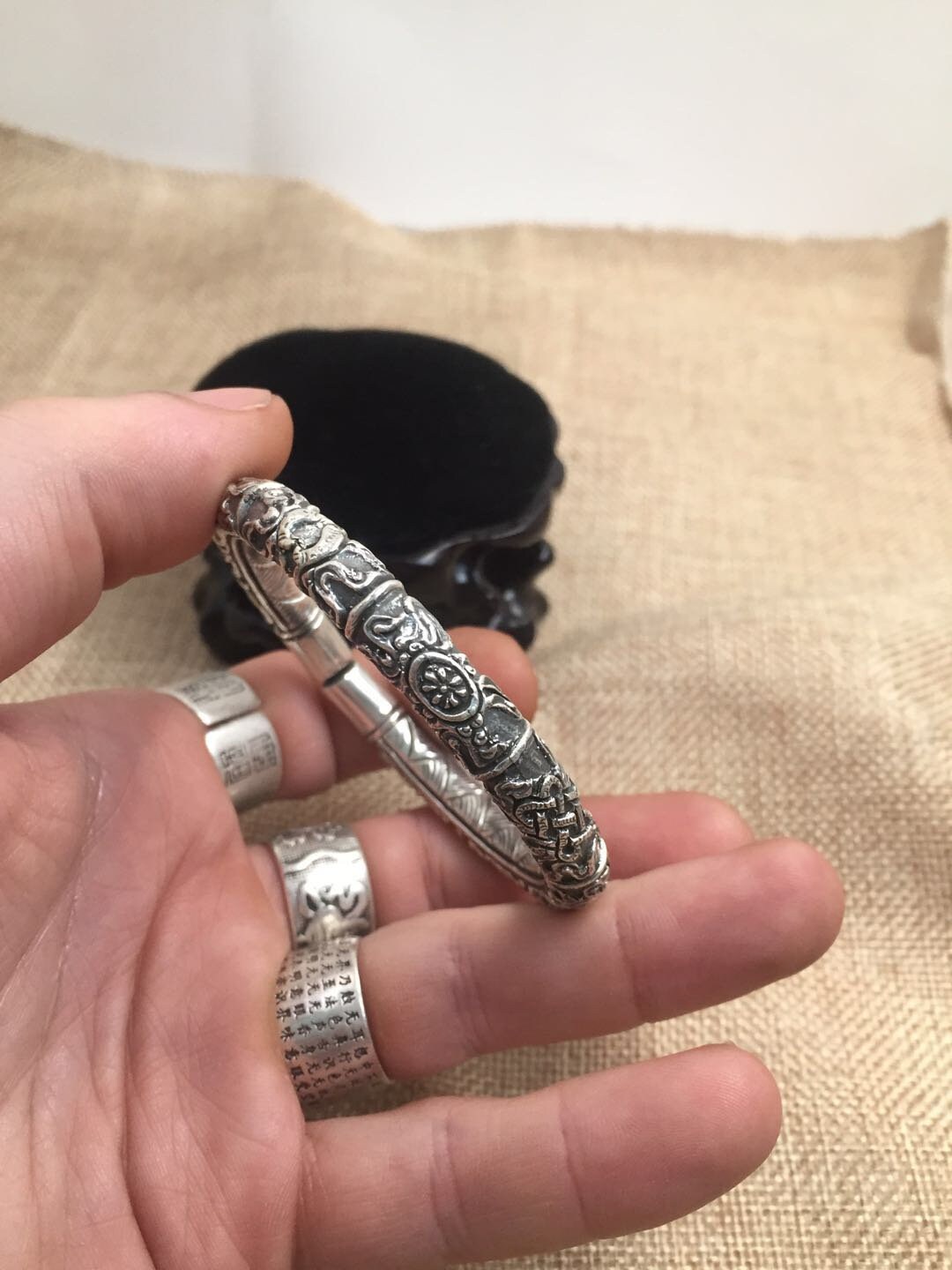 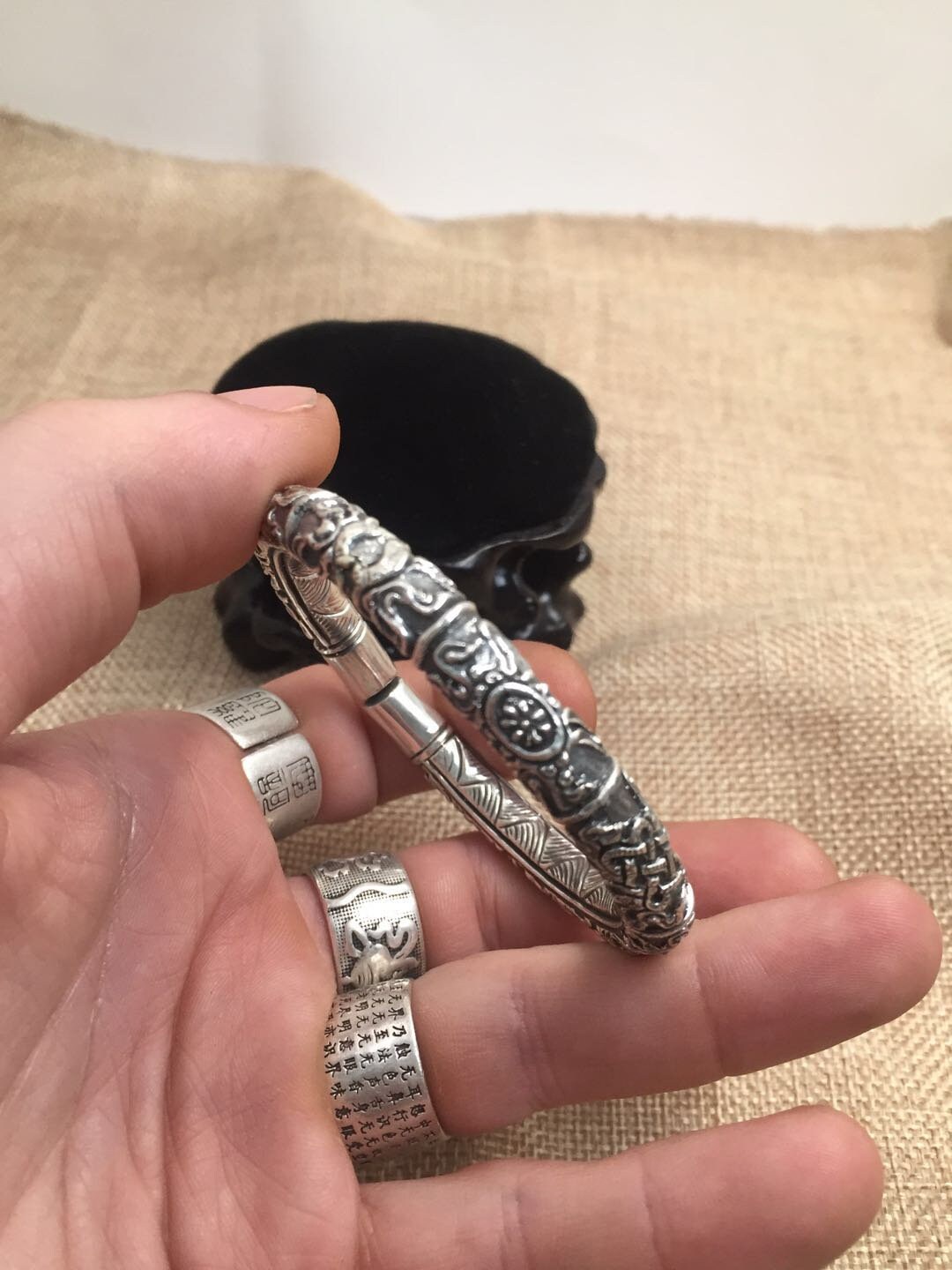 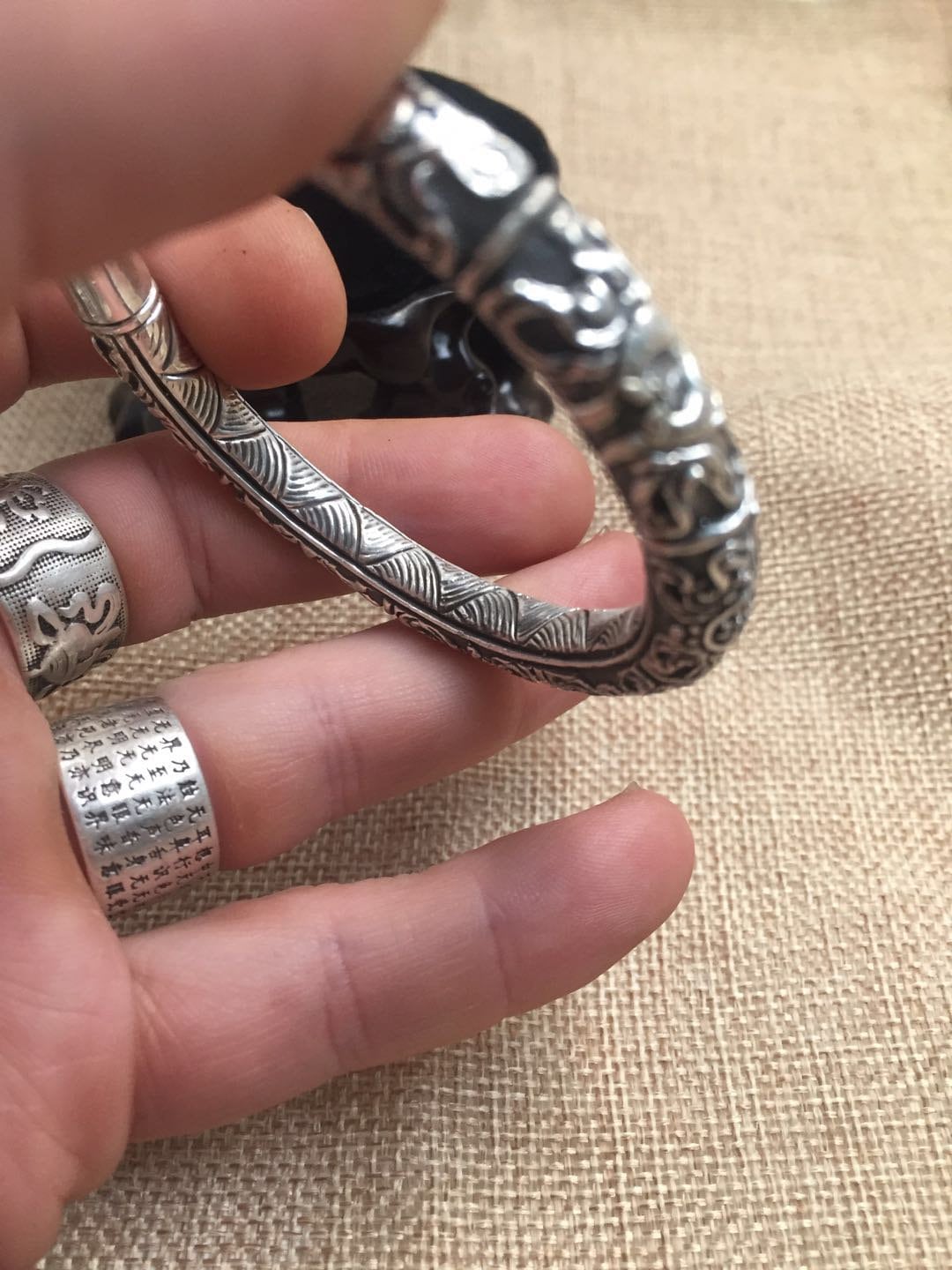 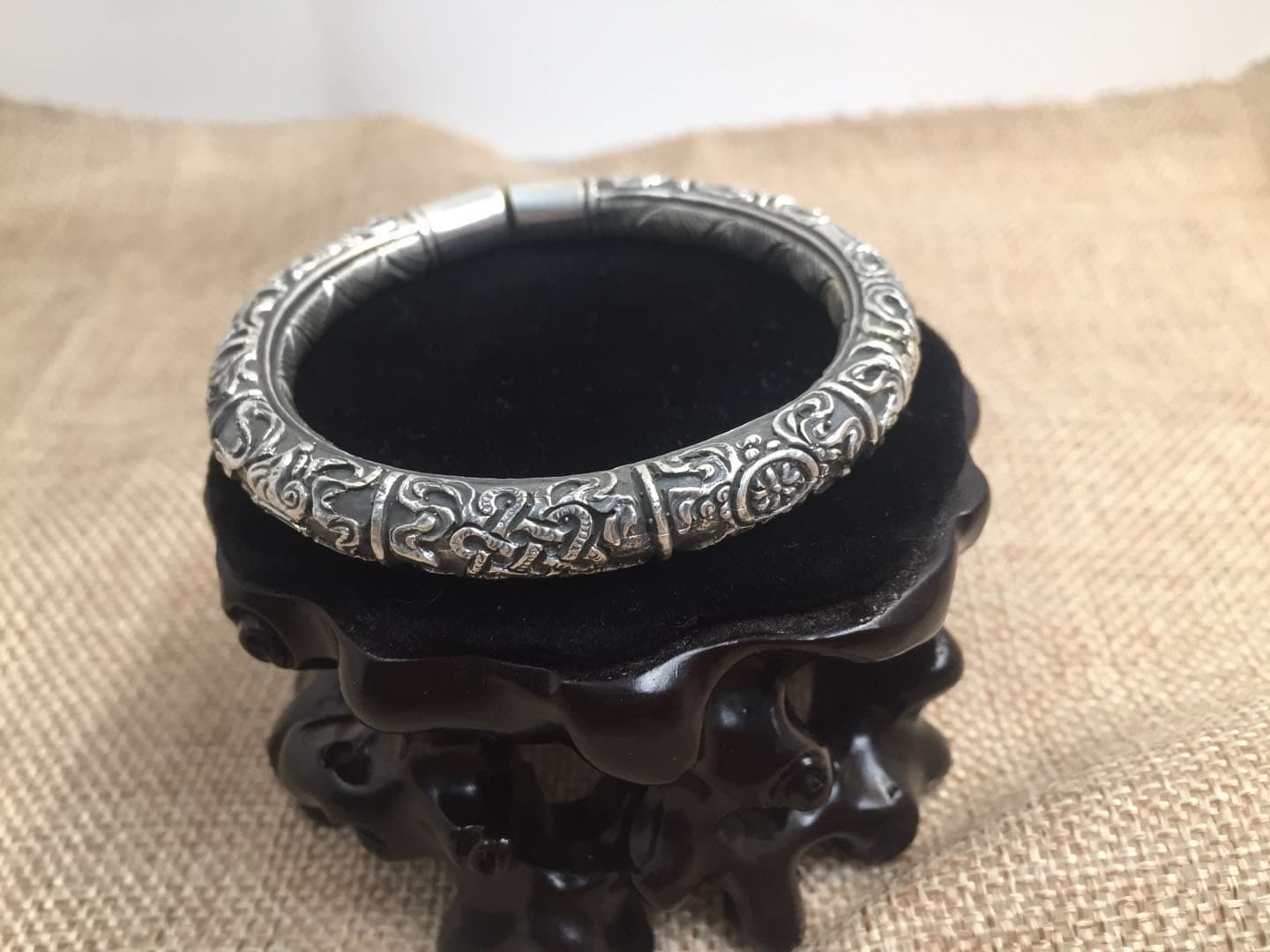 925 silver Buddhist rush bracelet, auspid signs.
Weighing in at 80.85 grams, or just under 3.50 grams per gram.
Open bracelet adjustable to any wrist shape.

The Astamangala, 8 auspid signs of Buddhism, were originally a set of Indian offerings presented to a king at his inauguration. Jainism first took up these symbols probably auspicious before Buddhism.

In the first form of Indian Buddhism, the Buddha was painted an aniconic, that is, without being represented in a human form, usually by an empty throne under an umbrella and under the Bodhi tree or by a stone marked with his divines imprints, which contain several auspian symbols such as the insignia of the Buddha's deity: the victory banner, the lion's throne, the trident, the Three Jewels, the eternal knot, the swastika, the concas, the pair of fish and the most common, the lotus and the wheel.

In traditional Tibetan Buddhism, these eight symbols form the Buddha's body: the parasol represents his head, the two fish his eyes, the vase his neck, the lotus his tongue, the golden wheel his feet, the banner of victory his body, the conch his word and the endless knot his mind.

As the parasol protects from the sun, the Chatra protects against suffering and material and spiritual dangers. It is both a symbol of royal dignity and of the activity that protects beings, but also of joy, celebration and positive acts, refreshed by its shadow.

They represent the ability to attain liberation and free themselves from samsara, like the Buddha. They bring happiness, wealth, abundance, prosperity and fertility.

The vase of plenty (Kalasha)

Symbol of intellectual wealth and longevity, it contains holy water, elixir of immortality. For Buddhists, this water purifies the sufferings of the human spirit.

The lotus of immortality (Padma)

It is born of mud to bloom and open in the sun: it is the perfect symbol of the Buddhist conception of the world. The lotus flower is also emblematic of Buddha, who is often depicted sitting on it. The lotus symbolizes the divine beauty and purity of body, word and spirit, floating above the muddy waters of suffering, attachment and desire. It also refers to the path to spiritual awakening.

The conque represents the voice of the Buddha and the sound of his teaching, the Dharma, which awakens those who listen to him from the sleep of ignorance and encourages them to do their own good as well as that of others. It also symbolizes the absence of evil.

Originally a symbol of love, the knot of infinite life and bliss, which can sometimes have a form of flower, symbolizes longevity, the interrelationship between phenomena (laws of causes and effects), the interdependence of all things and the union of compassion and wisdom.

It represents the victory of the Buddha and the Dharma over the forces of evil and the triumph over ignorance, negativity and obstacles. In Tibetan Buddhism there are eleven different forms of banners that symbolize the eleven methods of combating negative forces.

The Dharmachakra, another name for the Wheel of Dharma, is one of the most important symbols of Buddhism. It symbolizes the Buddha's teaching and its propagation in all directions and in all eras. This teaching allows beings to know the happiness of positive acts and liberation. The Buddha was the first to set it in motion when he delivered his sermon on the Four Noble Truths in Sarnath after his Awakening.