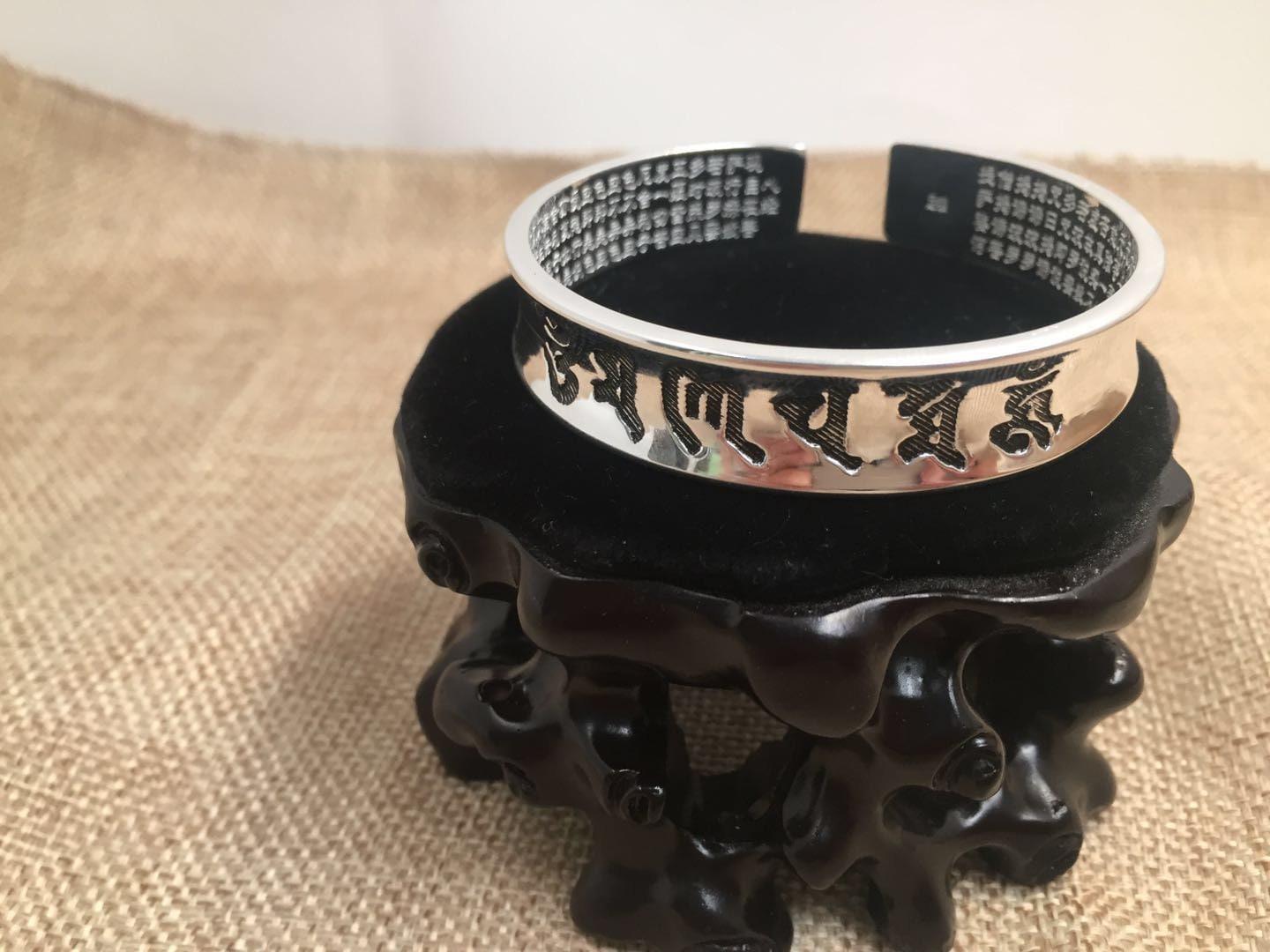 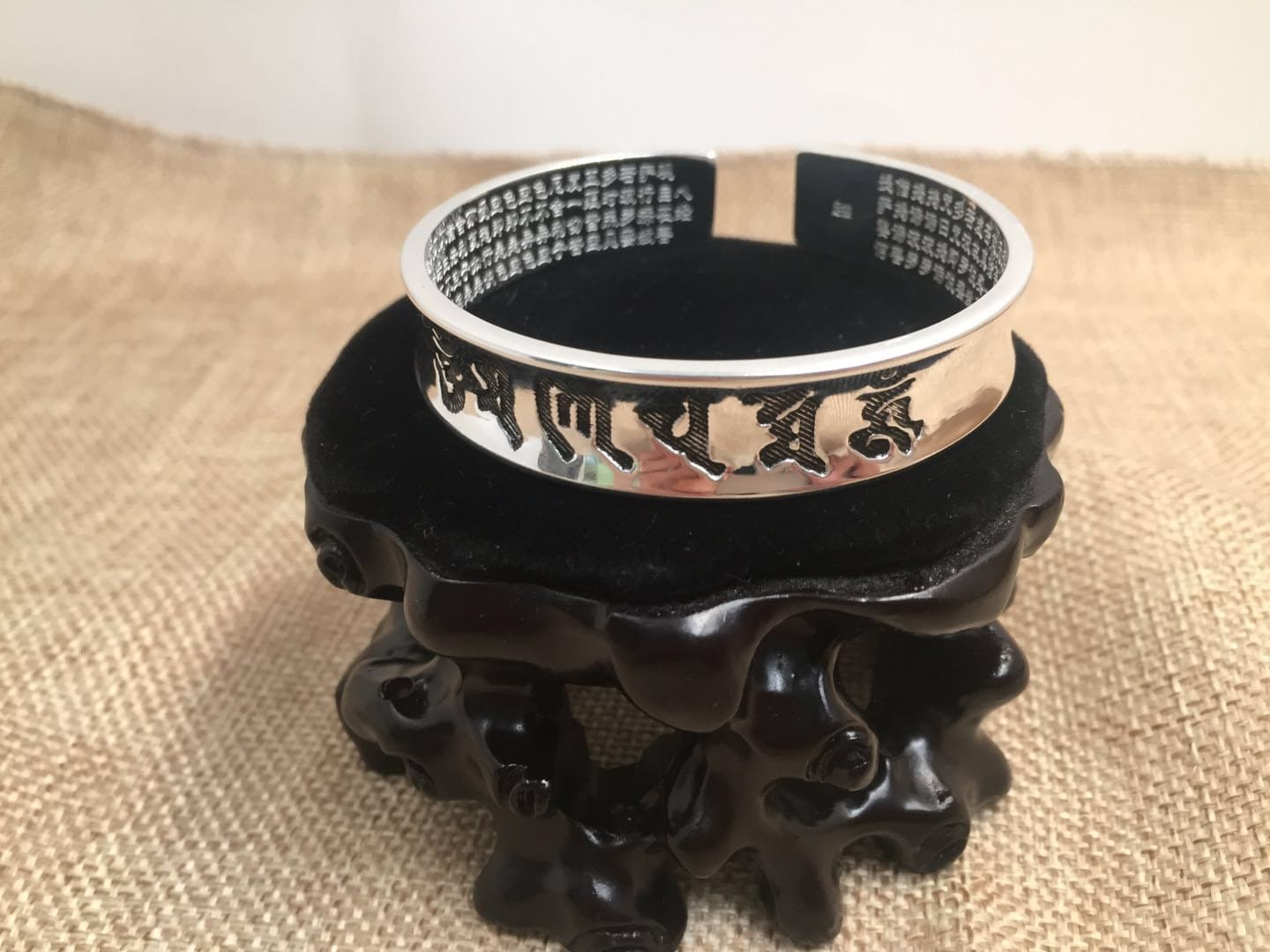 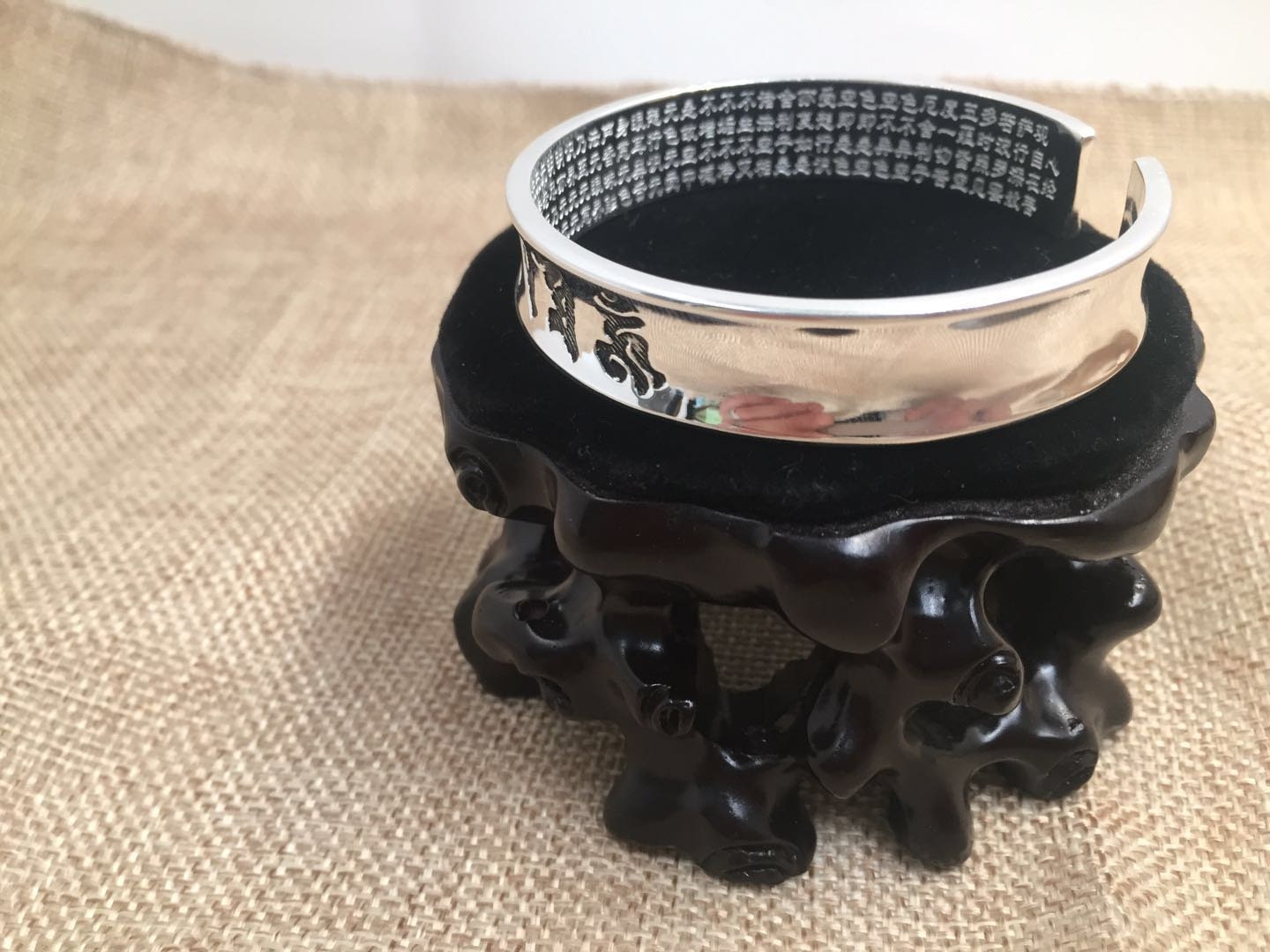 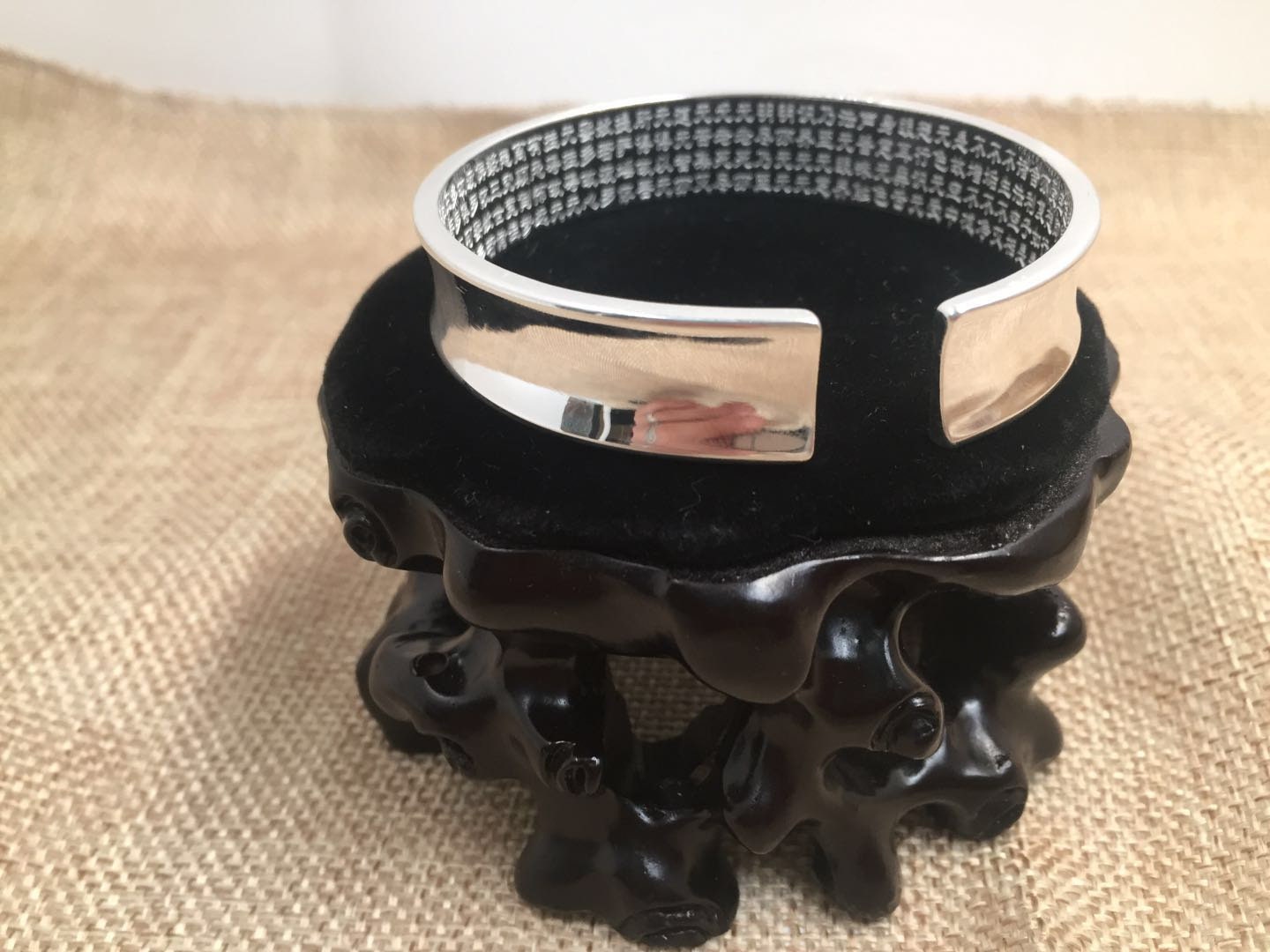 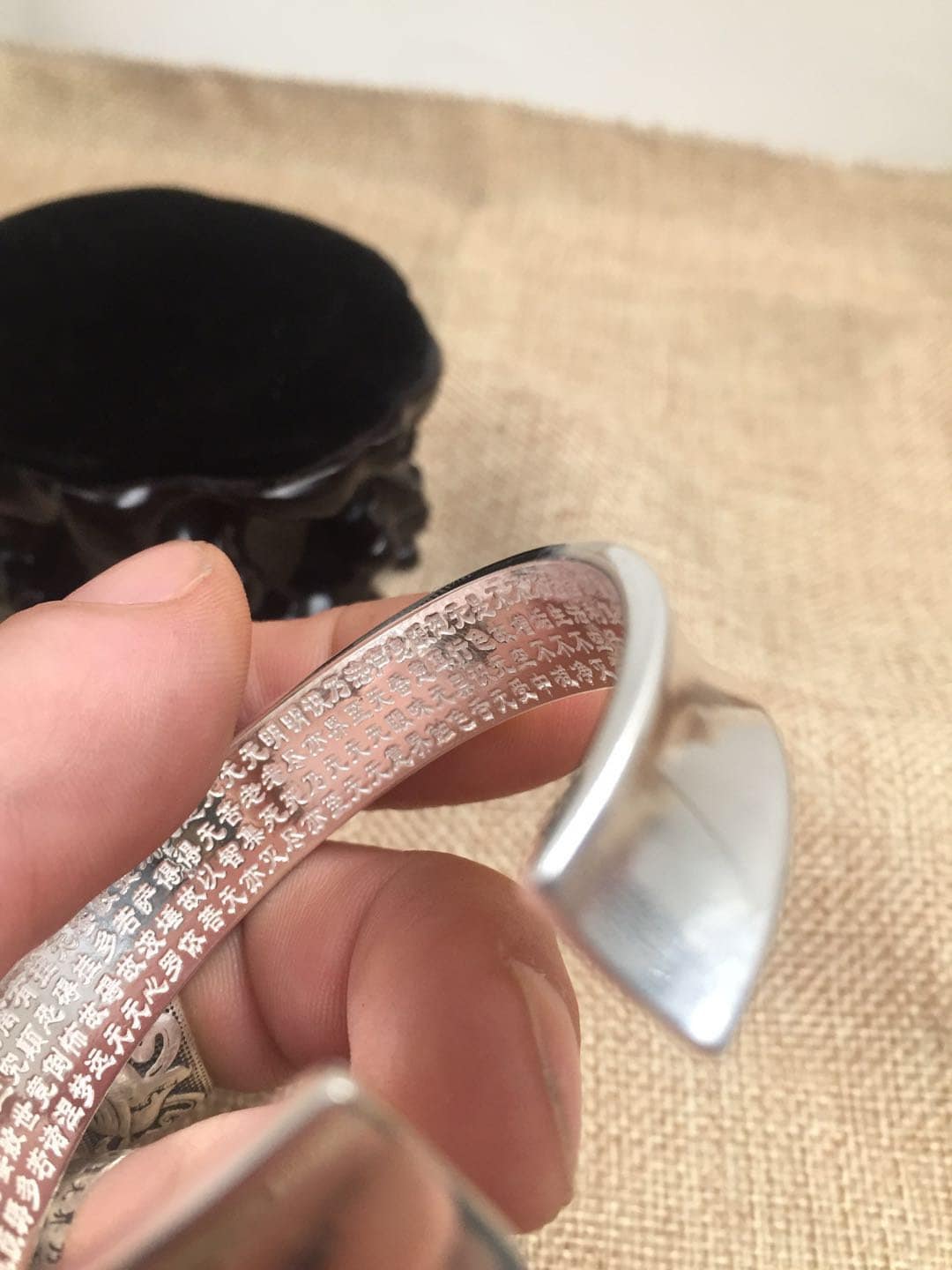 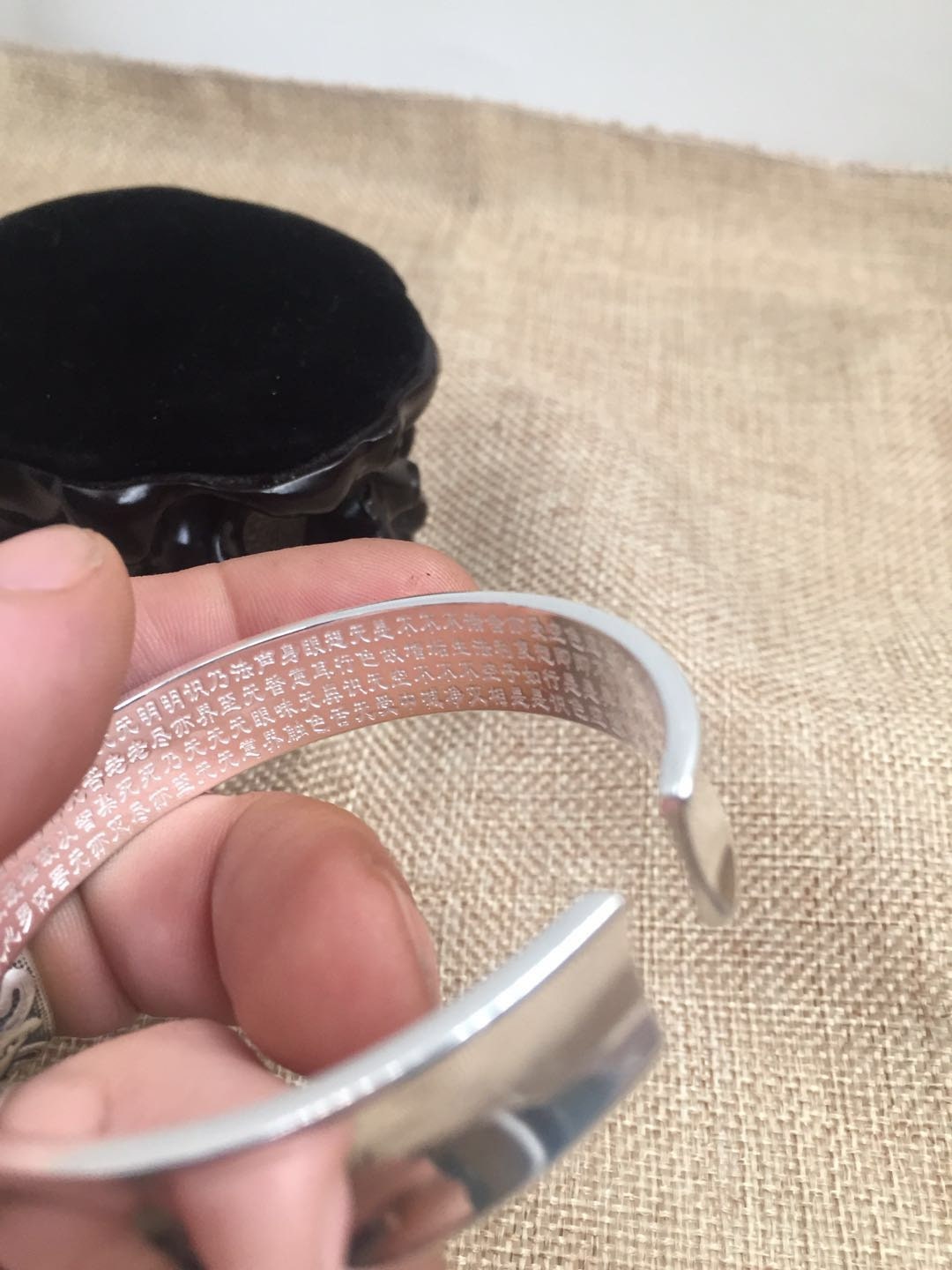 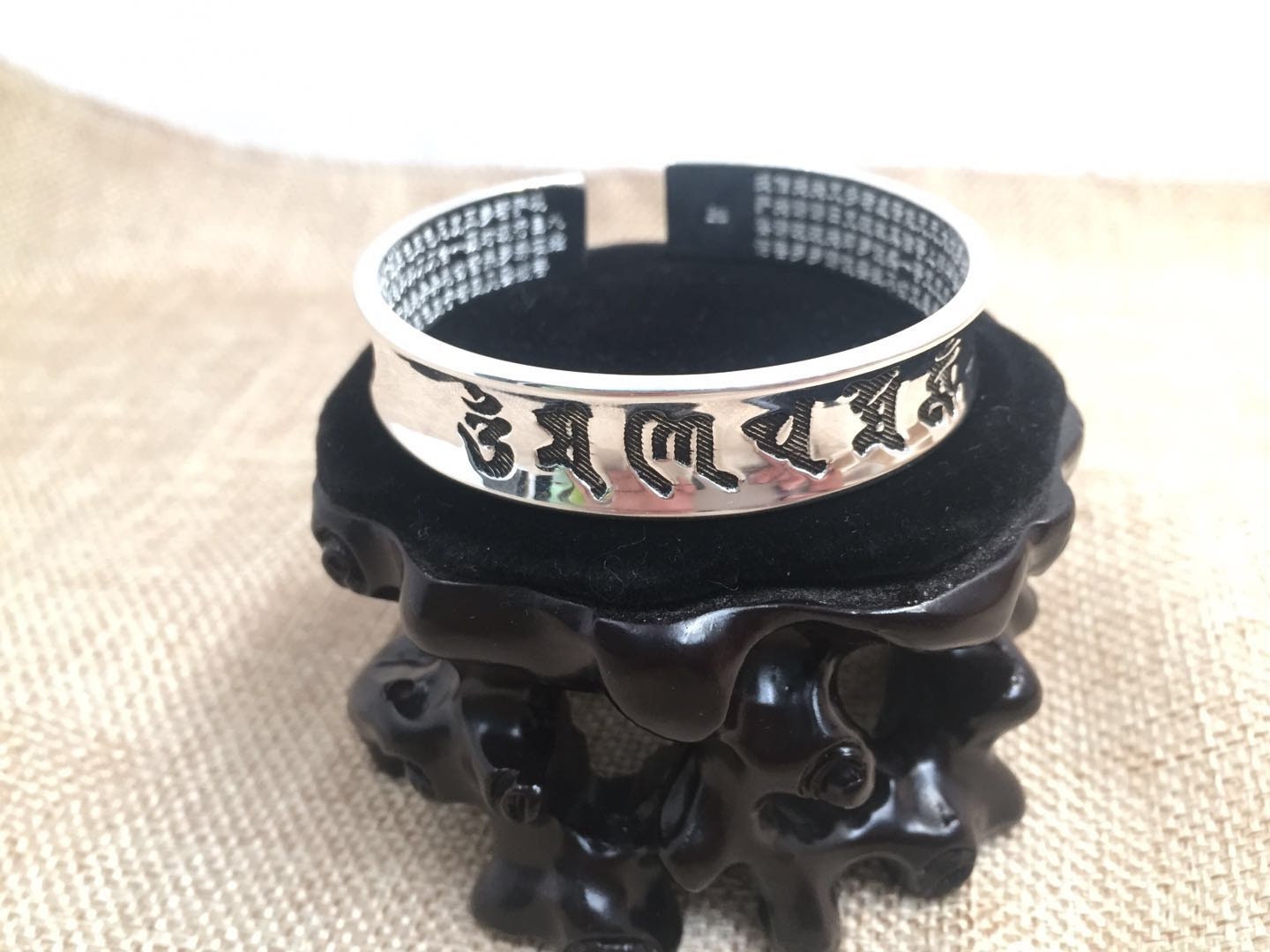 Weight of 37 grams, or just under 3.50 euros per gram.
Open bracelet adjustable to any wrist size.

The sutra is engraved both on the outside and inside of this bracelet.

The sutra of the heart is the smallest Buddhist sutra in existence, the translation of which is in French.
Tribute to the Arya Triple Jewel!

At the same time, the Bodhisattva Mahâsattva ârya Avalokiteshvara contemplated the very practice of the profound perfection of wisdom and saw that the five aggregates were also empty of their own nature.

Then, by the power of the Buddha, the venerable Sharipoutra addressed in these terms the bodhisattva Mahâsattva ârya Avalokiteshvara:

"The sons and daughters of the lineage who wish to practice the profound perfection of wisdom, how should they do it?"

The Bodhisattva mahâsattva ârya Avalokiteshvara then replied to the venerable Sharadvatiputra: "Shariputra, the sons or daughters of the lineage who wish to practice the profound perfection of wisdom must consider it as follows: they must to contemplate, correctly and time and time again, the fact that the five aggregates, too, are empty of their own nature.

Shariputra, so all phenomena are emptiness; They are unst their own; they are not born or cease; are neither soiled nor unfiled; neither deficient; nor perfect.

As a result, Shariputra, in emptiness there is no form, no sensation, no identification, no compound factors, no consciousness; no eye, no ear, no nose, no tongue, no body, no mind; no form, no sound, no smell, no flavor, no object of touch, no mental phenomenon. From the element of the eye and so on, to the element of consciousness of the mind, there is no element. There is no ignorance or elimination of ignorance and so on, until there is no aging and death, no elimination of aging and death. And in the way[not clear], there is no suffering, no origin of suffering, no cessation, no way; there is no transcendent wisdom, no obtaining, no non-obtaining.

Shariputra, thus, since there is no obtaining, the bodhisattvas are based on the perfection of wisdom and they remain in it, the mind without veil and without fear. And as they have gone well beyond any mistakes, they reach the final stage of nirvana. It is on the basis of the perfection of wisdom that all the Buddhas of the three times also give rise to the unsurpassable awakening perfectly accomplished.

Sharipoutra, this is how a Bodhisattva Mahâsattva must practice to the profound perfection of wisdom."

Then the Bhagavan came out of his concentration and praised the bodhisattva Mahâsattva ârya Avalokiteshvara saying: "Good! Ok! O sons and daughters of the lineage, so it is, so it is. It is exactly as you have just exhibited that the profound perfection of wisdom should be practiced and the tathagatas themselves rejoice.

When the Bhagavan had said this, the venerable Sharadvatiputra, the bodhisattva Mahâsattva ârya Avalokiteshvara, the whole entourage, as well as the world of gods, men, asuras and gandharvas, were filled with joy and praised the words of the Bhagavan.

Om ma'i padme hem (in Sanskrit ) o-ipadme h, sometimes followed by a seventh syllable, / (h), with a diminutive 2/a mai, is one of the most famous mantras of Buddhism, originating from its Branch of The Mahayana. This is the mantra of the six syllables of the bodhisattva of compassion Avalokite-vavara (Guanyin in Chinese, Gwan-eum in Korean (hangeul: Kannon in Japanese, Chenrezig in Tibetan). It is therefore also called the mantra of great compassion (mah-karu). It is considered important in Tibetan Buddhism.

The optional seventh syllable is a "bija," HRI in Tibetan, is a germic or essential syllable invoking Avalokiteshvara.