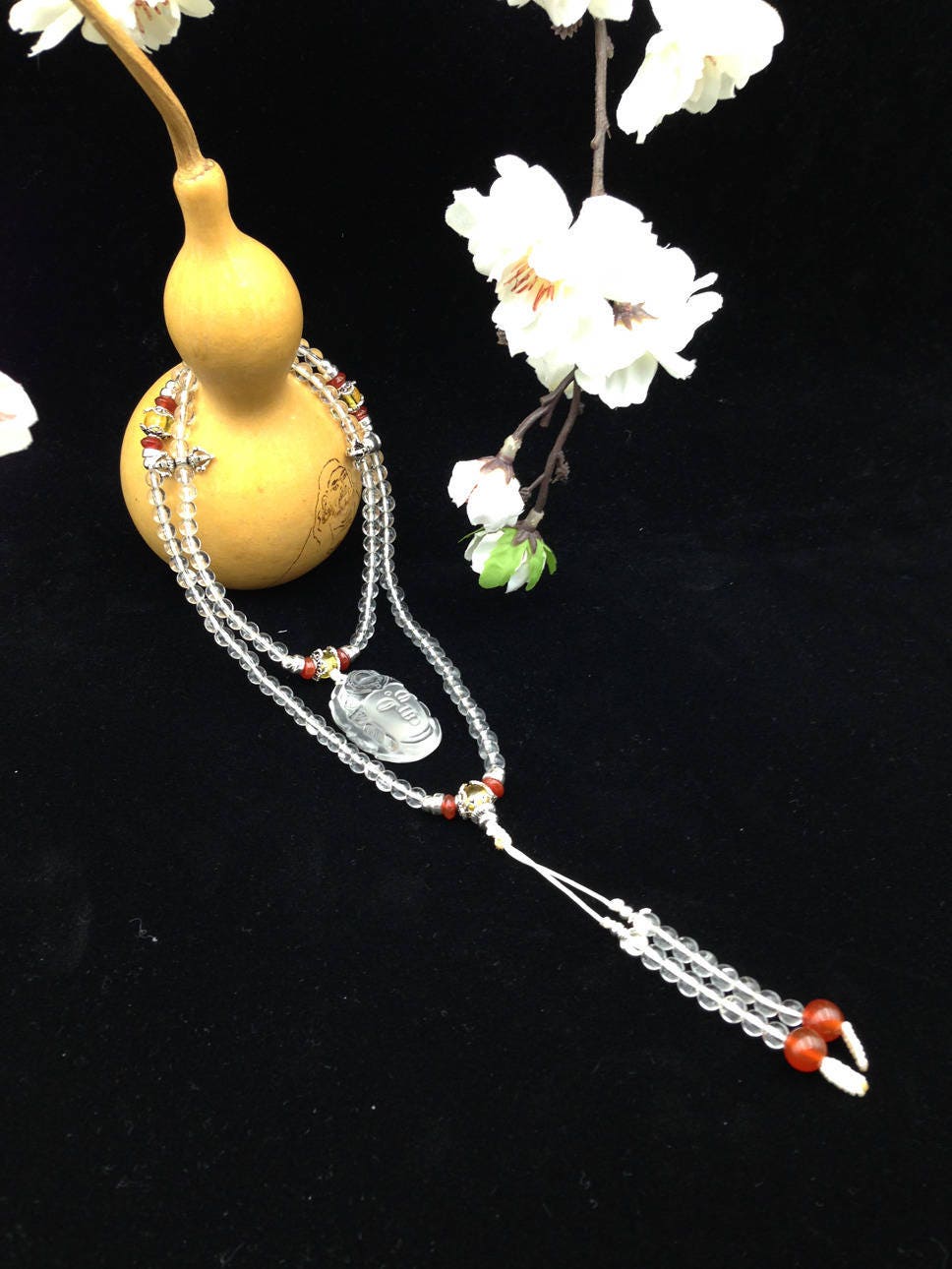 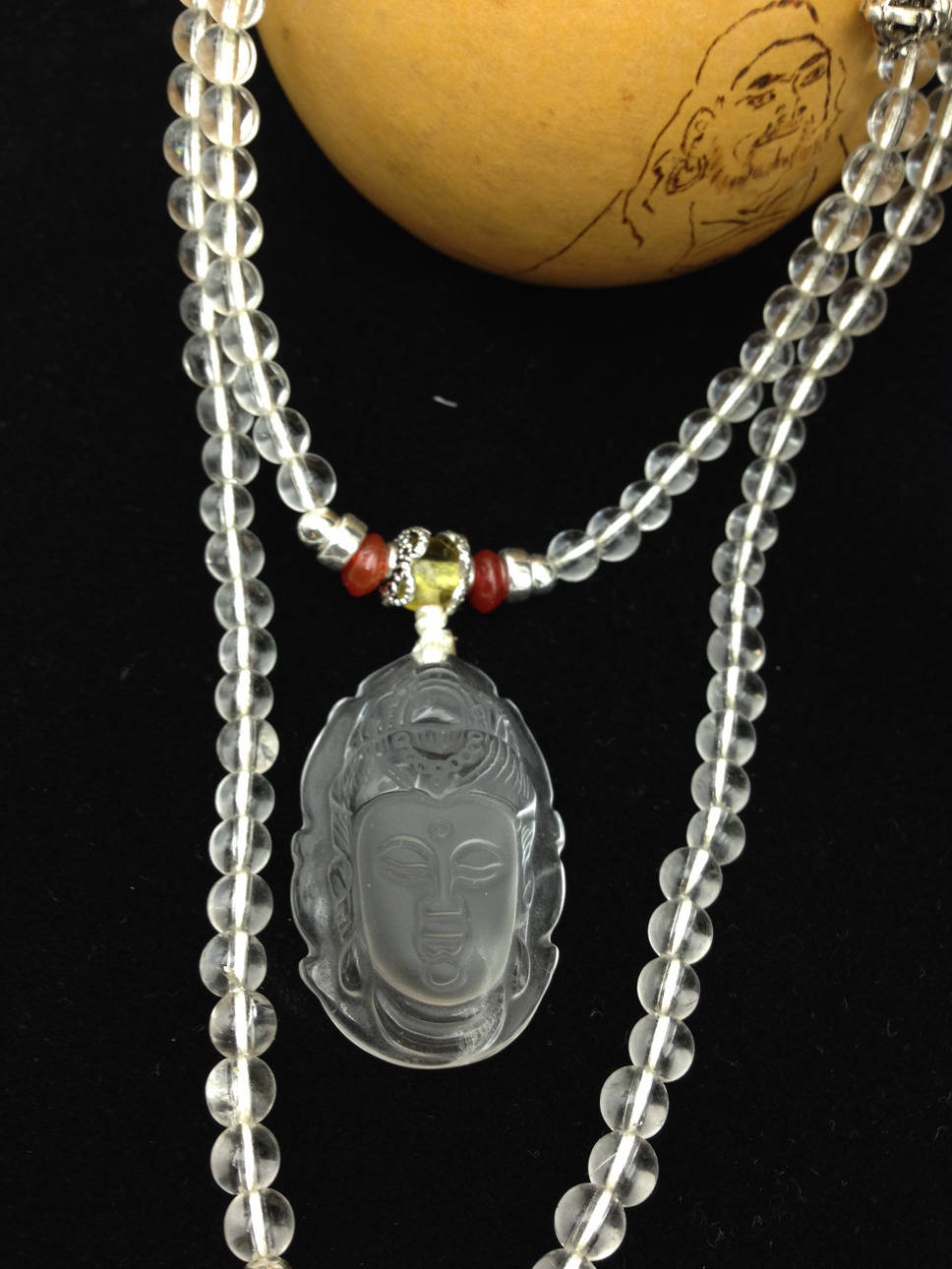 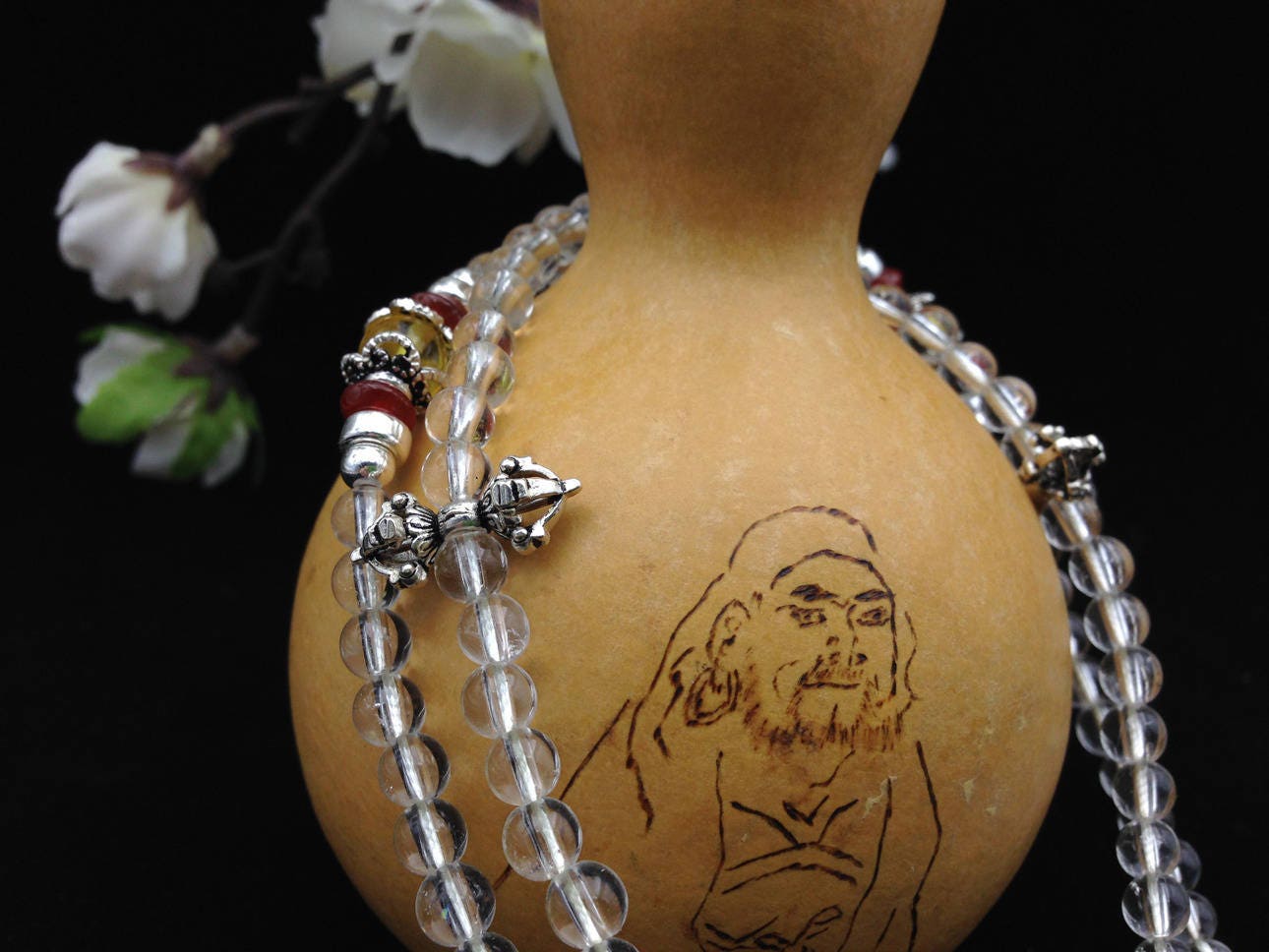 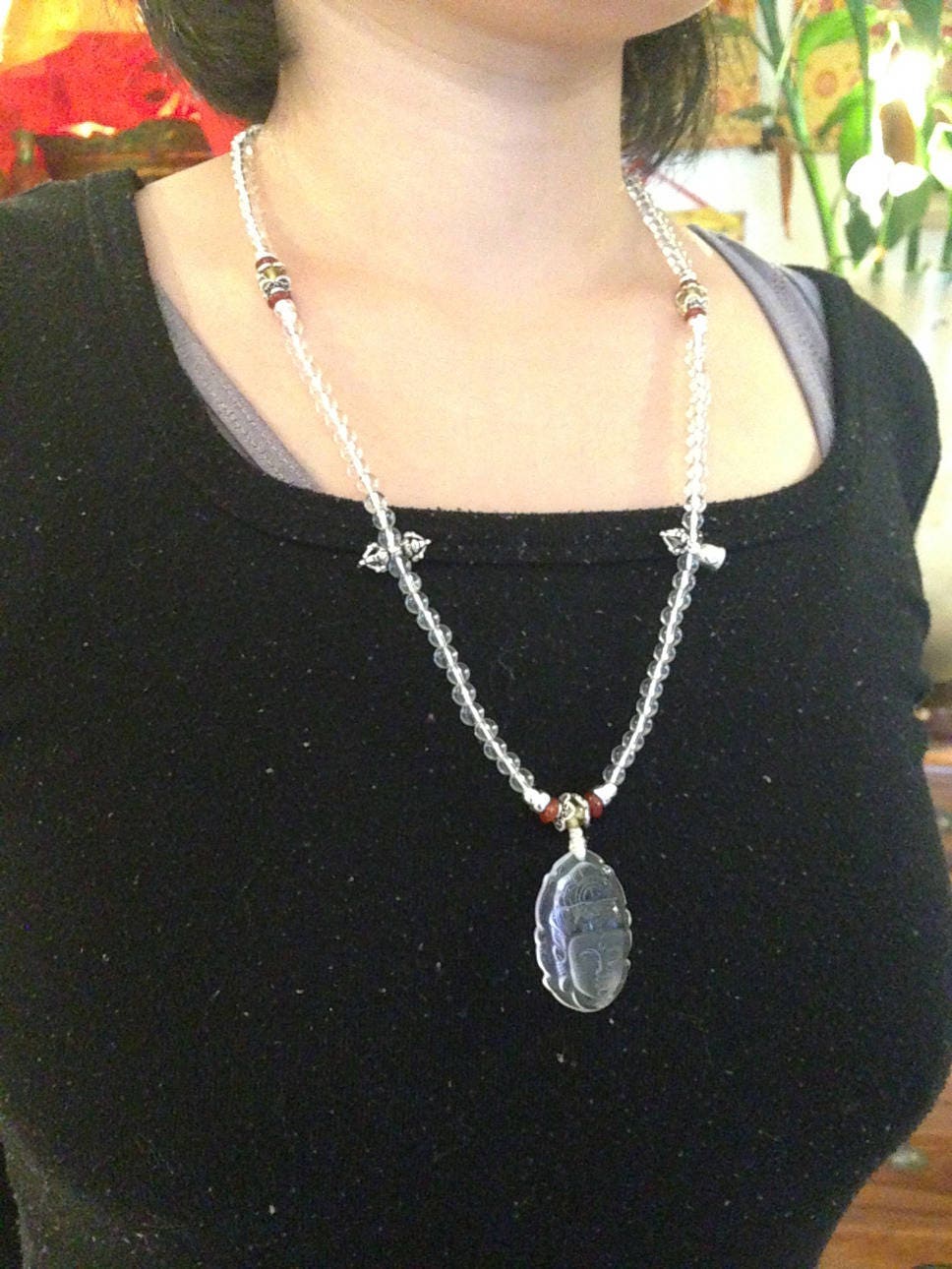 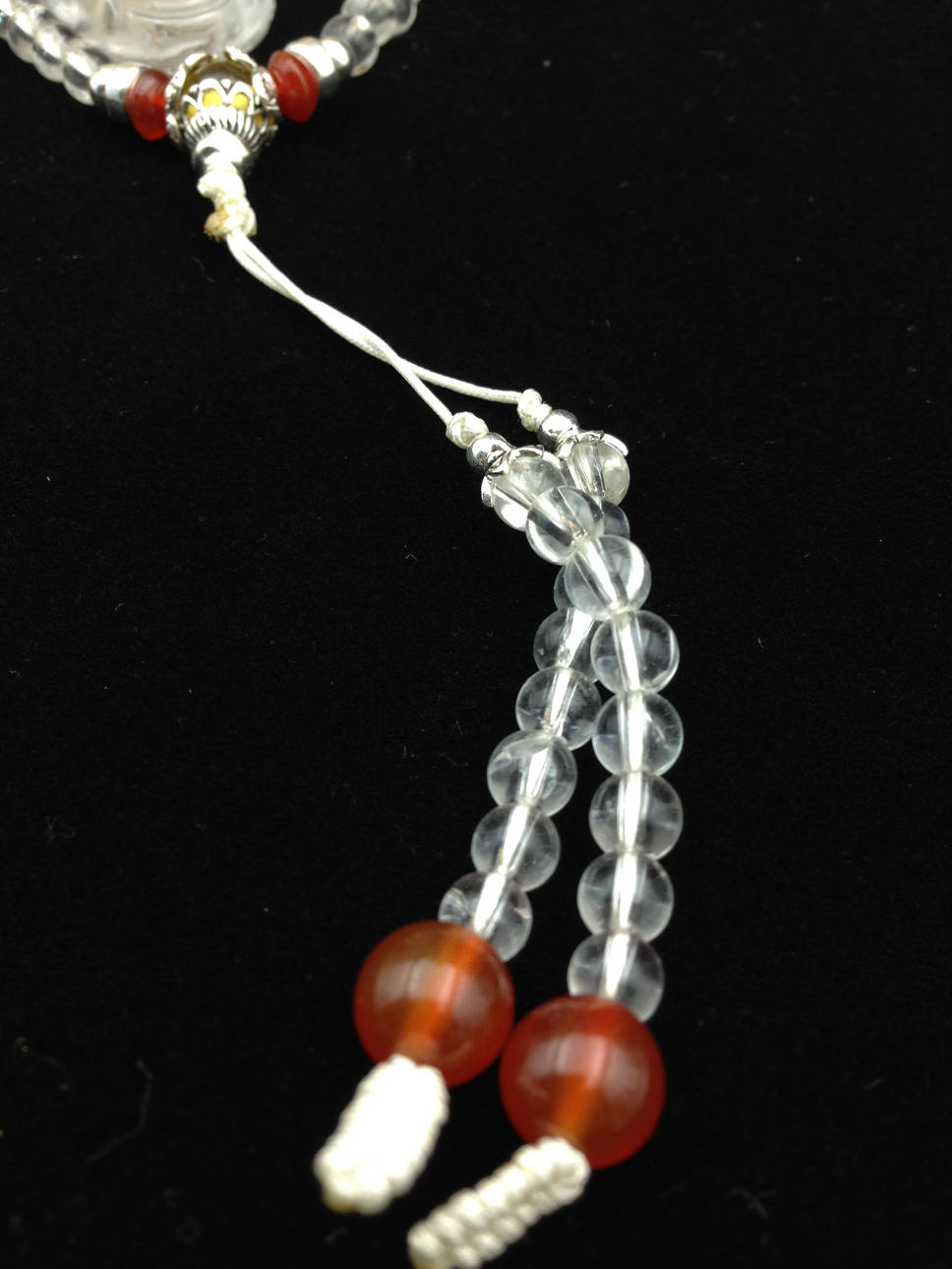 rock crystal mala, compassionate bodhisattva, Burmese amber, cornaline, silver 925/1000th.
Guan-yin is the Chinese form of avalokitesvara boddhisattva, one of the most revered bodhisattvas who has undergone feminization from the Songs probably under popular pressure. It helps all the beings of the earth to attain enlightenment. Misidical and protective of children, it takes many different forms, sometimes masculine, sometimes feminine. She is often portrayed as a woman dressed in white, standing on a lotus and holding a toddler as she helped women have children. But often it is depicted as a bodhisattva with a thousand arms and a thousand eyes. Guan -Yin Pusa helps those in need, including those threatened by water, demons, fire and swords. It is counted by the Taoists among the immortals. Guanyin is known to be able to free prisoners from their chains, deprive snakes of their venom, and stop lightning. It is considered to be an offshoot of the Amitabha Buddha, whose form is often represented on his forehead, and, with the boddhisattva Dàsh-zh (Mahasthamaprapta) the two assistants of the Buddha.
She knows how to cure virtually all diseases. Avalokitesvara is very popular and has its image displayed in almost every house, and the celebrations celebrating its birth and enlightenment are of great value to Buddhists. It is very popular especially in Taiwan and its temple on the mountain of the "Wonderful Summit" is always filled with a crowd of pilgrims who shake rattles and throw firecrackers to get his attention.
Considered the protector of Tibet where King Songtsen Gampo and later the Dalai Lama are seen as his emanations. This is also the case of other tulkou such as karmapa. Also known as Padmapi or Ma'ipadm, it is invoked by the famous mantra Om̐ Ma'ipadme hum (ॐ मणिपद्मेहूम्).
In a mythical tale, Guan Yin was the daughter of King Miao Zhong, during the Zhou dynasty. The girl's holiness inspired her to enter a Buddhist convent, but her father did everything to oppose it; he asked the convent's grandmother to make her daughter work night and day to make her free from monastic life, but animals came to help her carry out her work. Seeing her failure the king finally had her killed.
Guan Yin's soul then descended to Hell, where his purity turned the funeral stay into paradise. The gods of the Underworld became alarmed and asked the Buddha to bring her back. This is how life was returned to her and she reappeared on an island where she protected the sailors from storms.
His father was soon struck by the plague and blind. Guan Yin cared for him by making him eat the flesh of his arm, which she had cooked. She offered him her eyes so that he could regain his sight. He ordered that a statue of his daughter be erected. The sculptor did not quite understand the monarch's instructions and he created a statue with a thousand arms and a thousand eyes. He was so moved by his daughter's generosity and selflessness that he became a holy man. In return, his own conversion restored guan Yin's sight and arms.
The "Journey to the West", considered a popular account of Chinese mythology, tells that the "monkey king" once ascended to heaven to steal the peaches of immortality in the garden of Xi Wang mu, the "Mother Goddess of the West". The monkey provoked the wrath of the gods and Buddha finally decided to take him prisoner under a mountain. However, Guanyin interceded on his behalf to undertake a Buddhist pilgrimage to India.