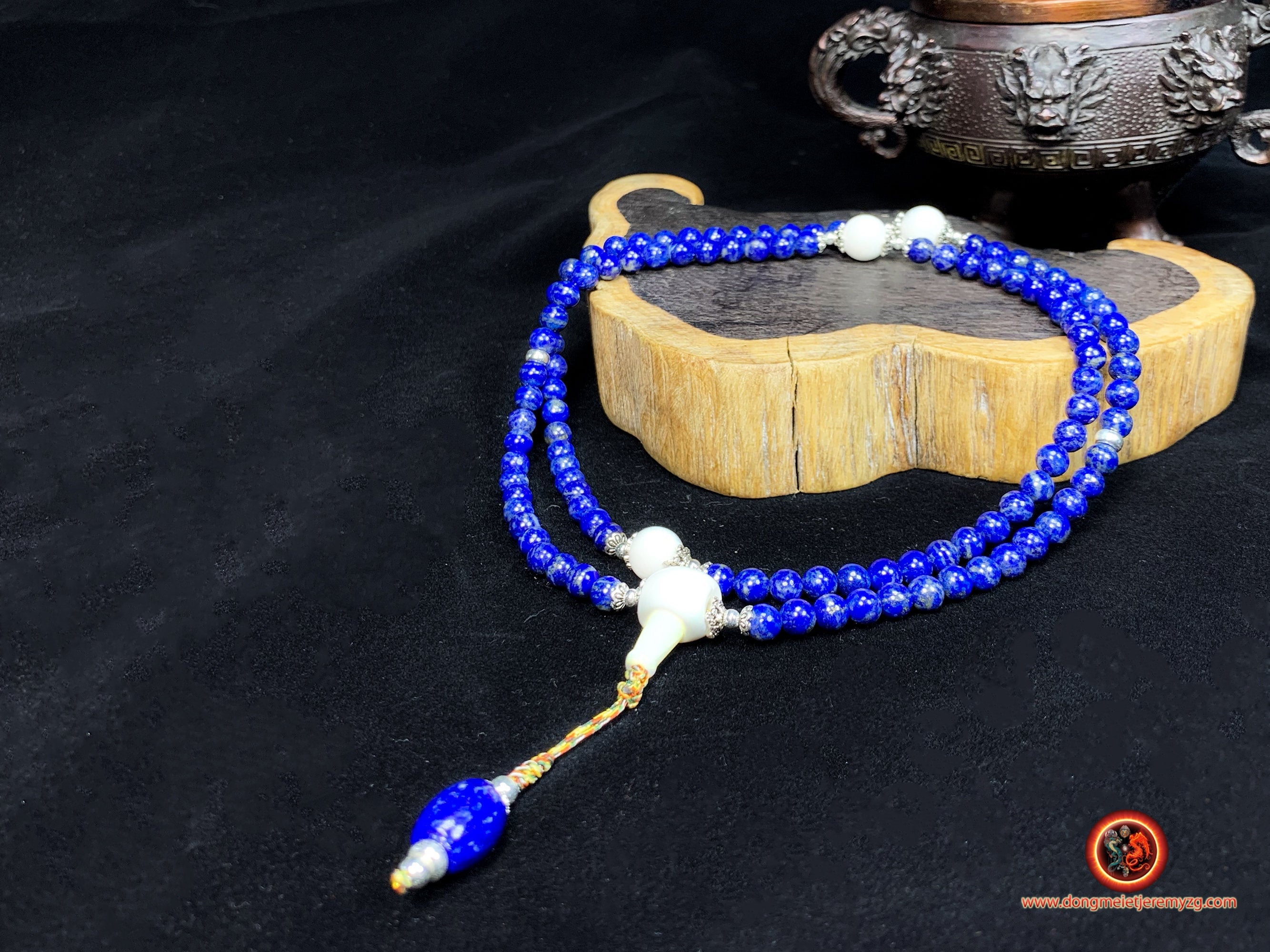 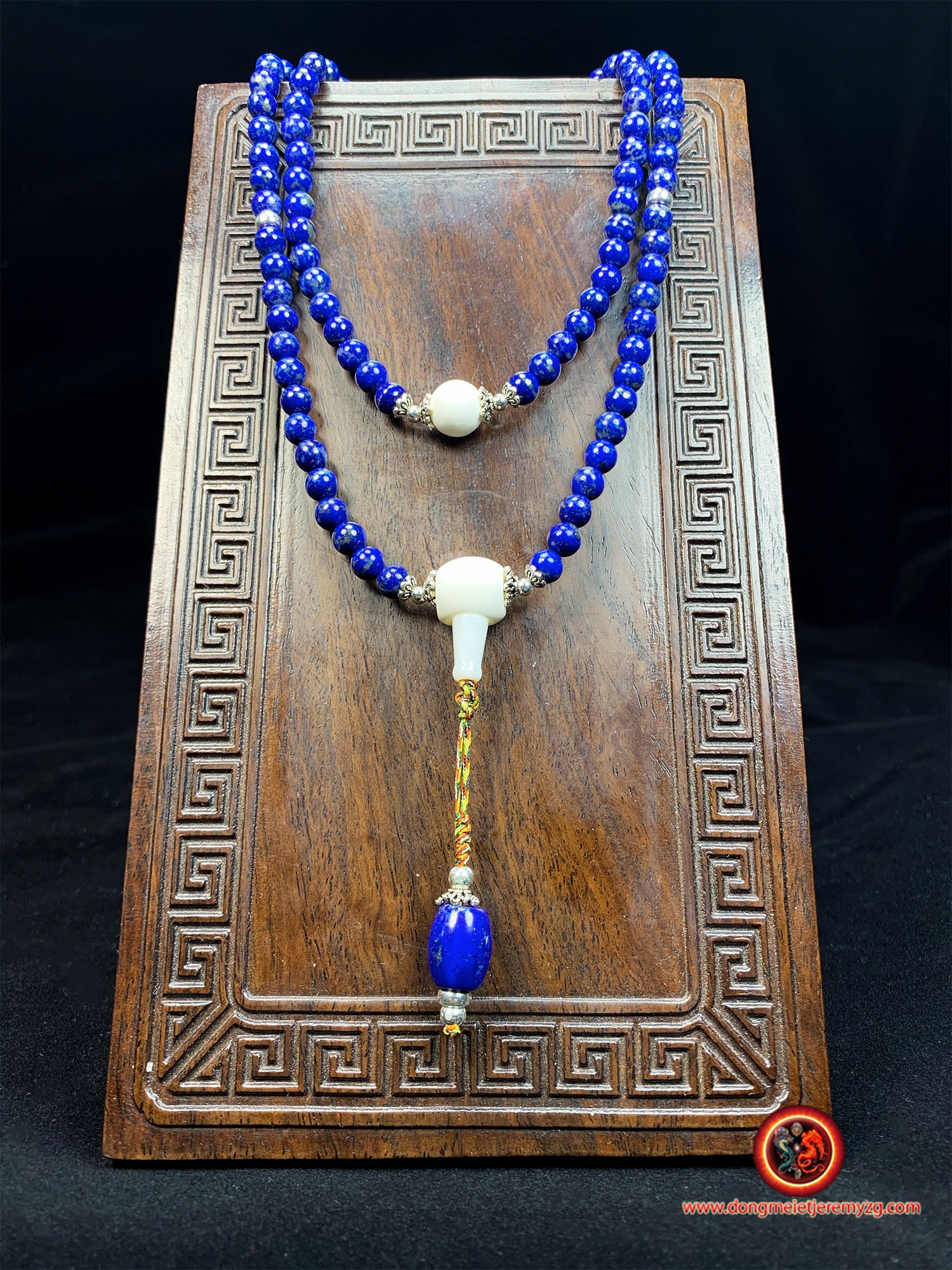 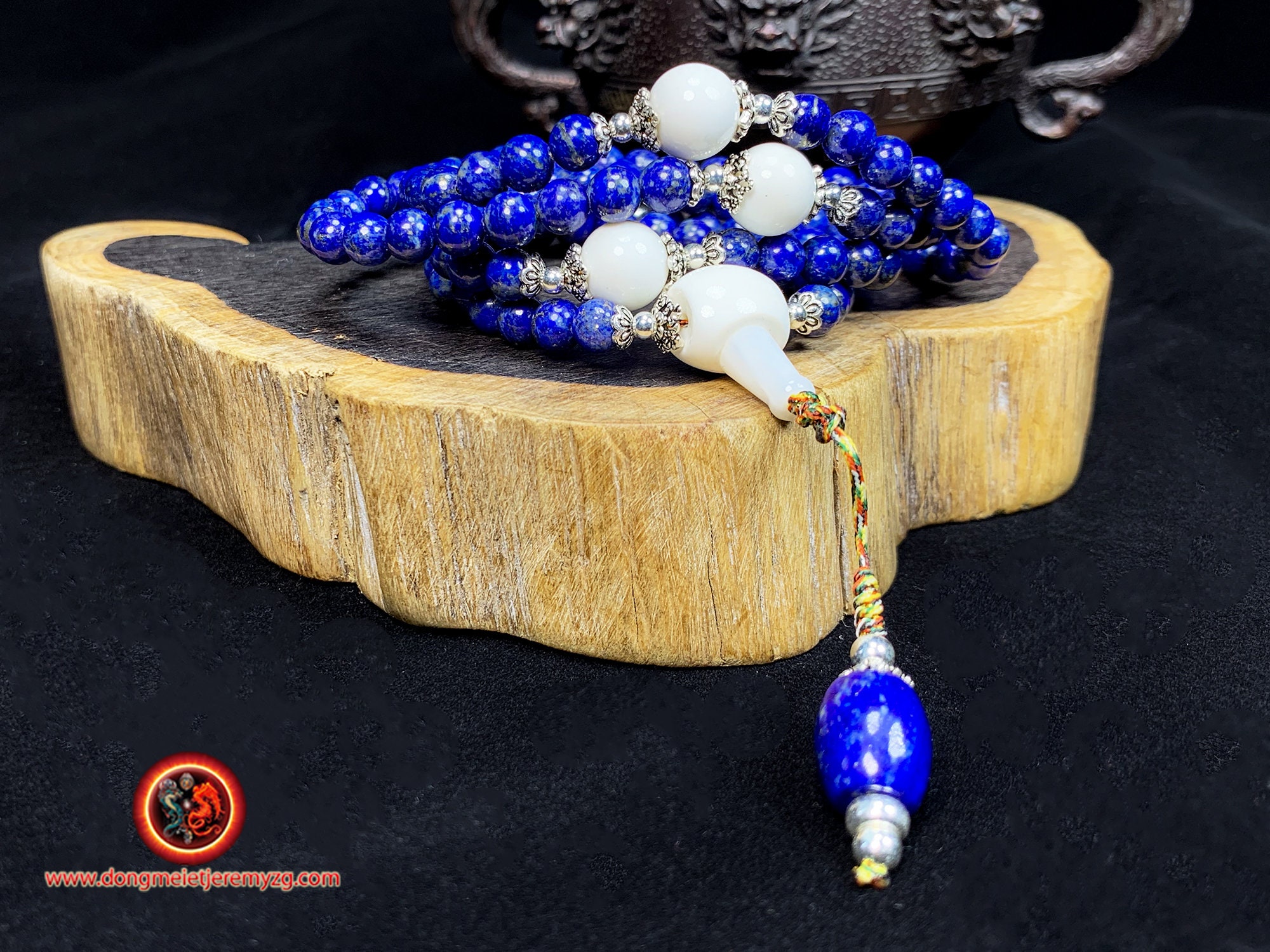 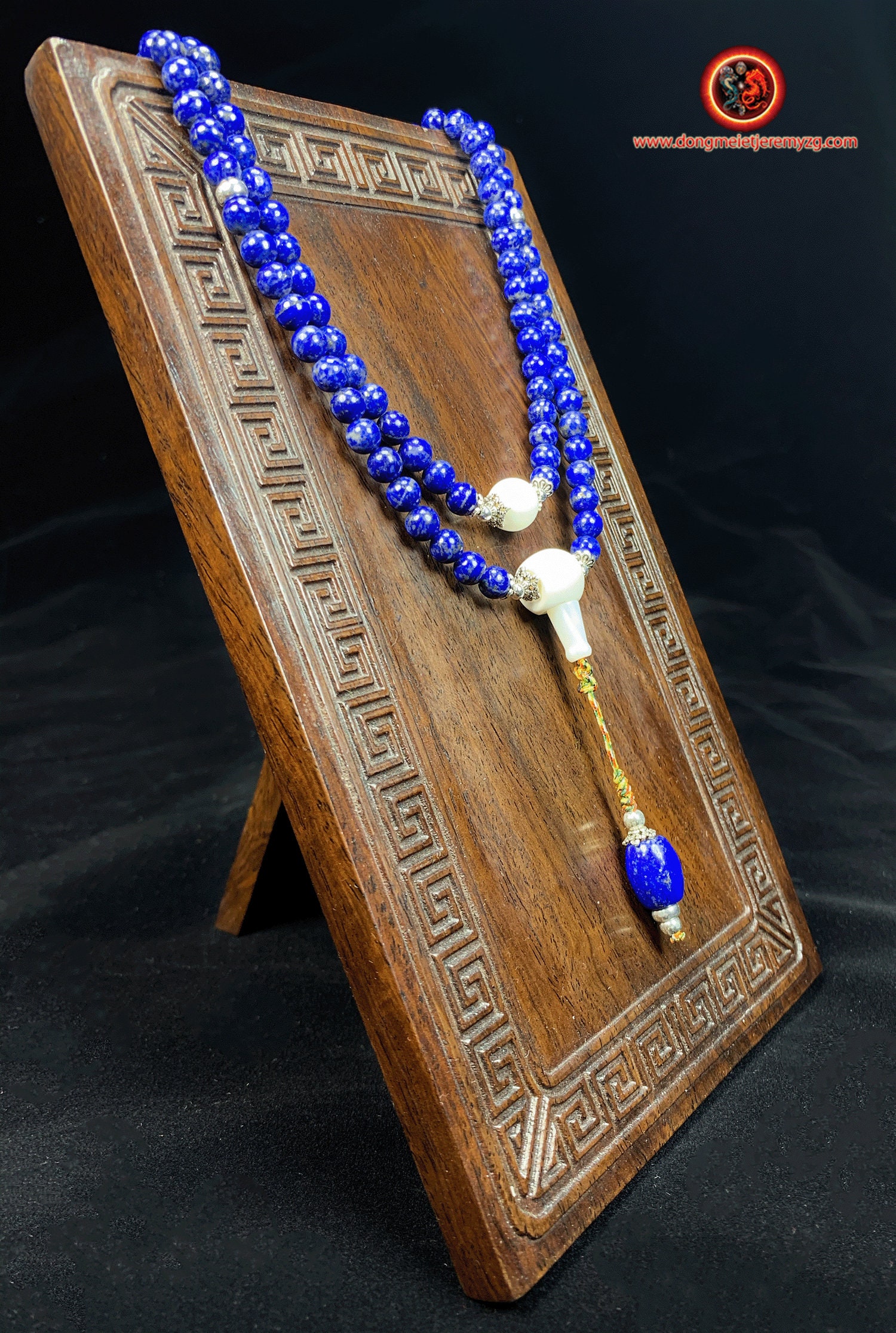 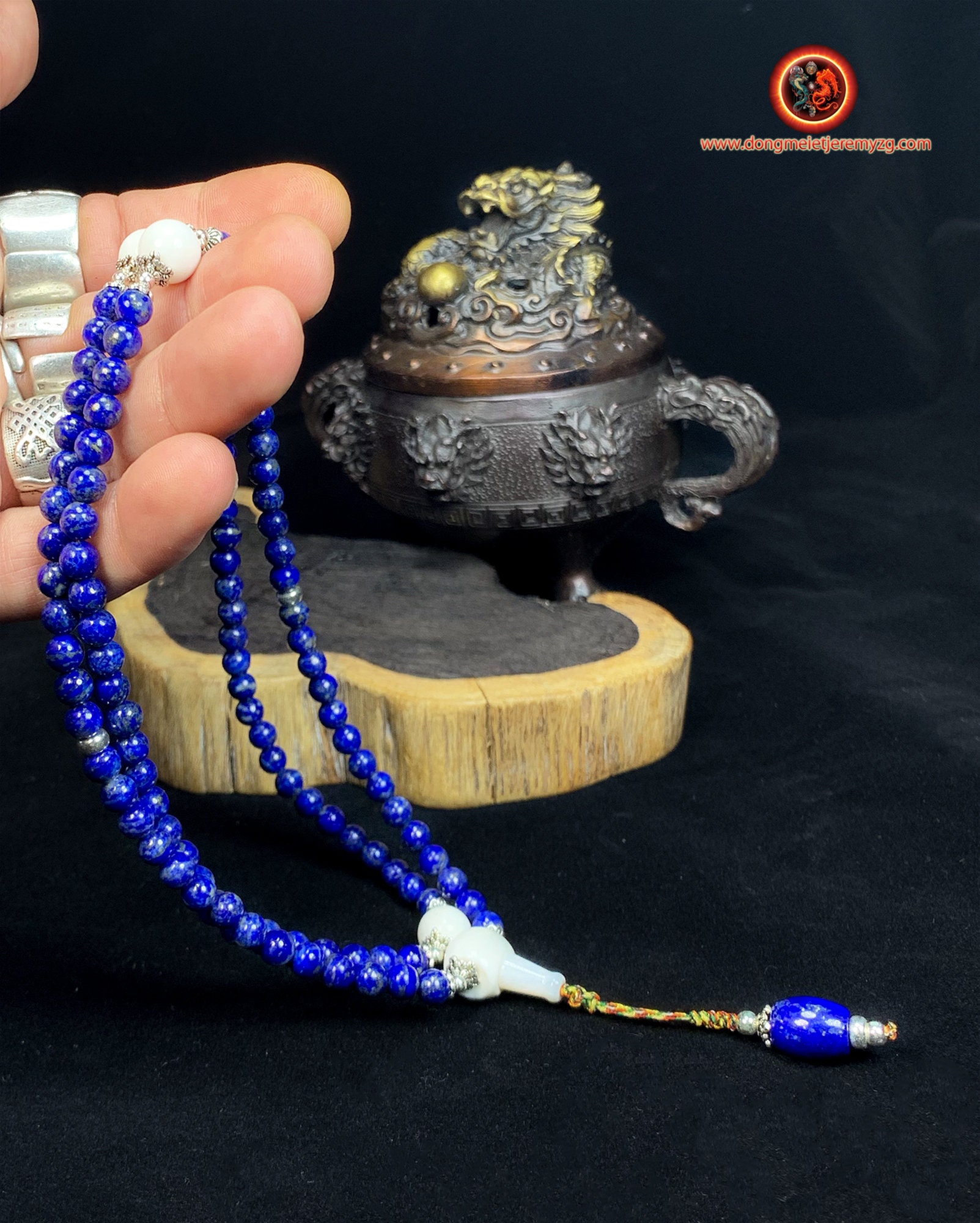 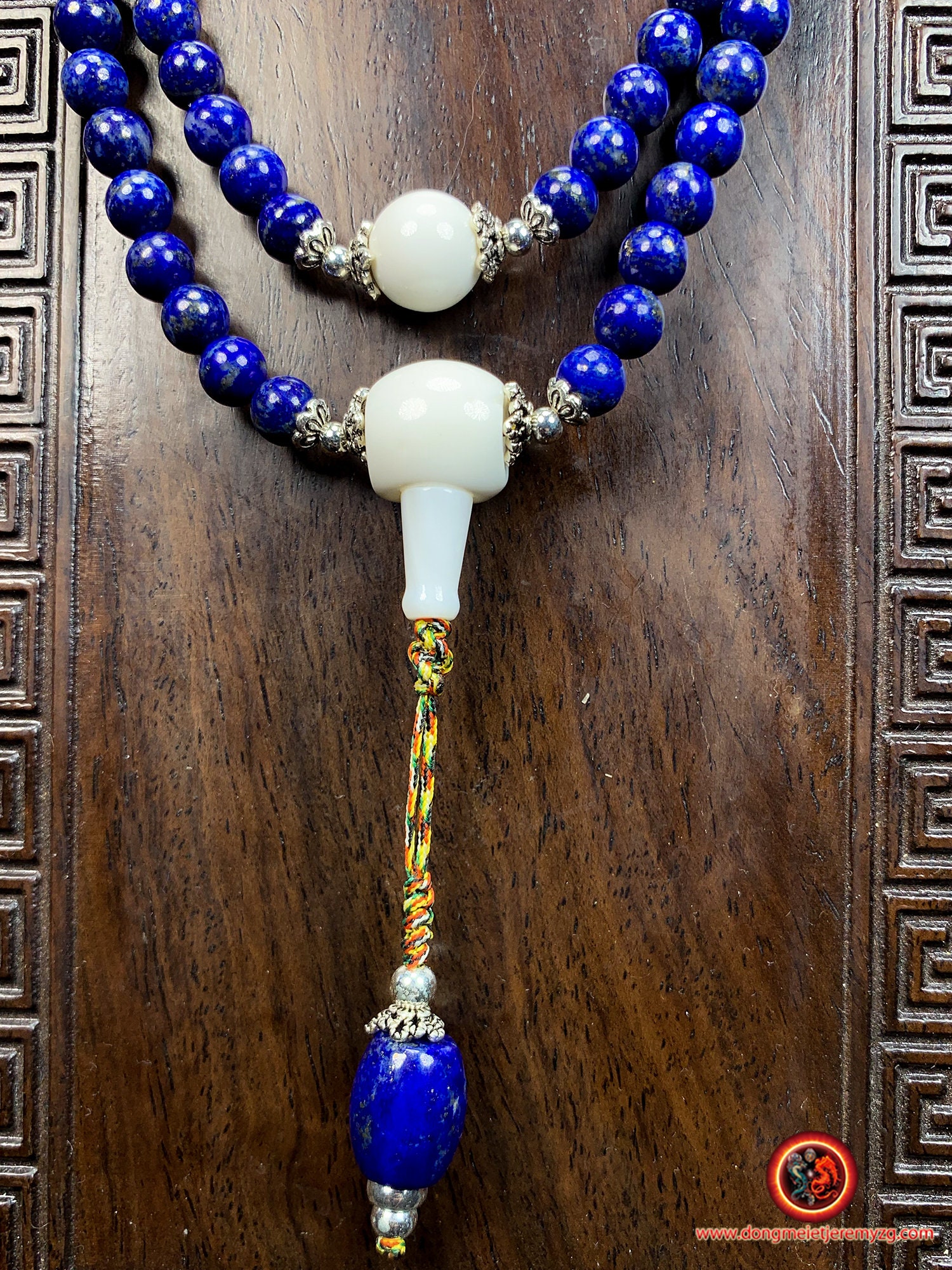 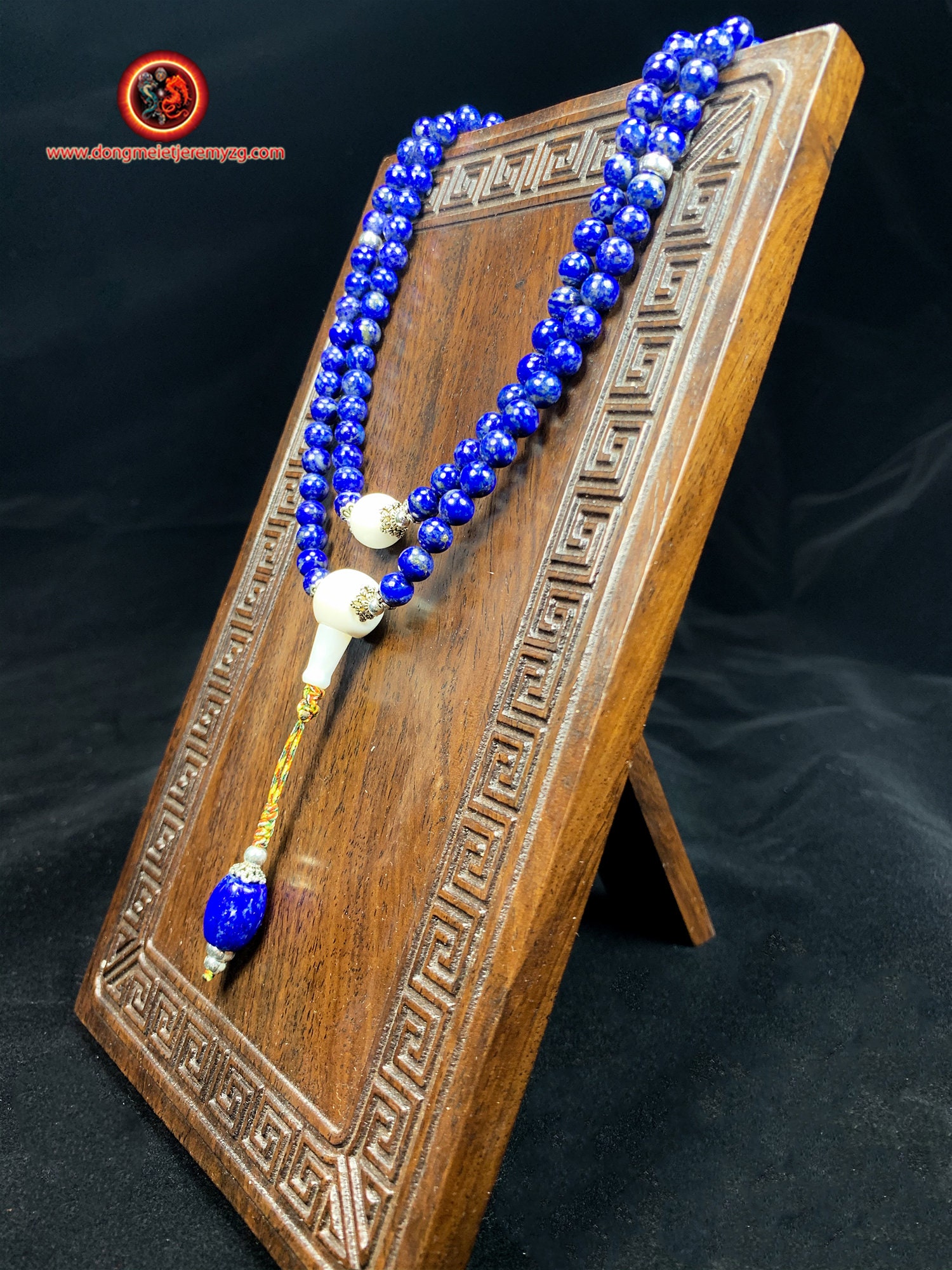 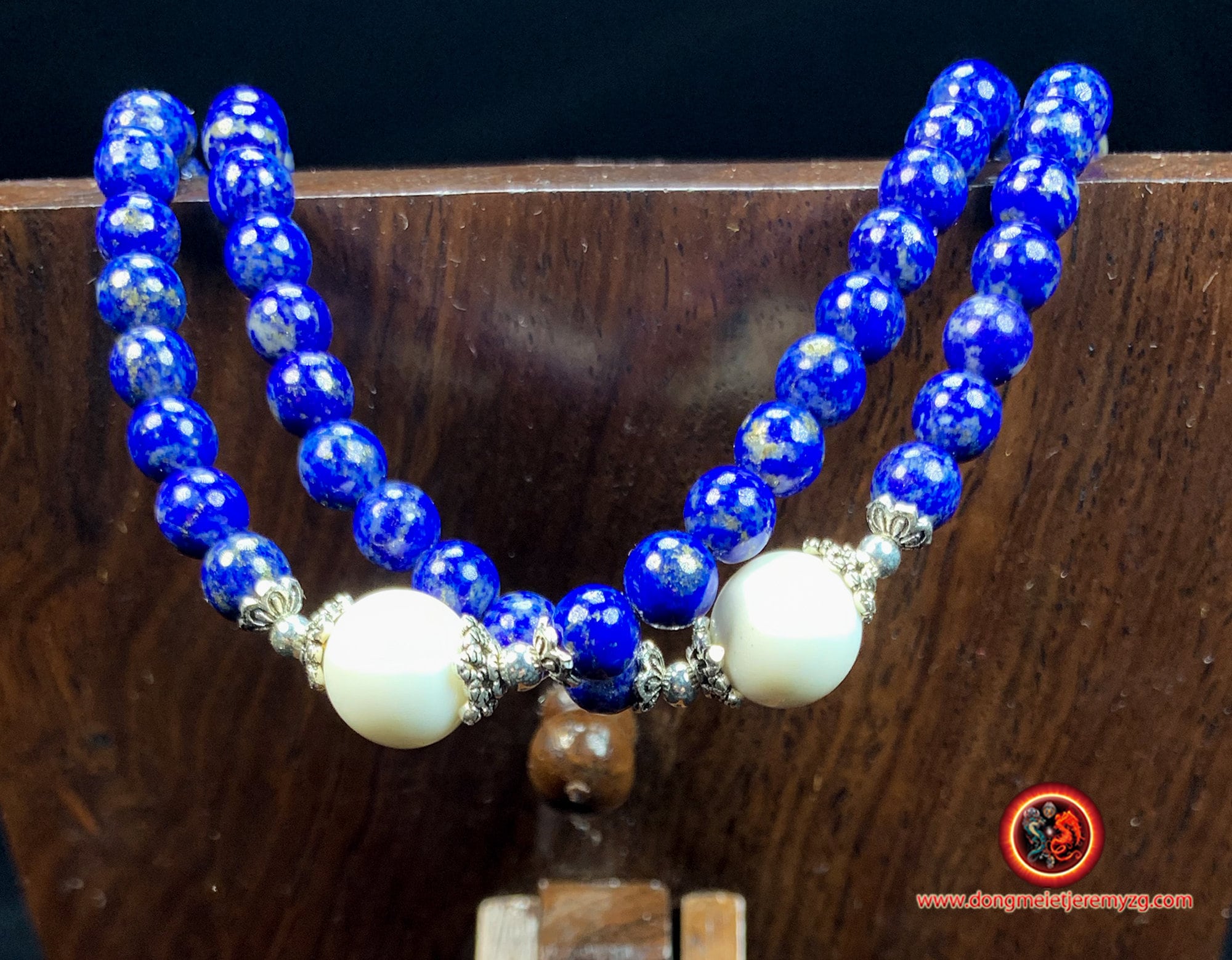 Made to order time realization between three to five days

Bhaishajyaguru, the medicine Buddha and lapis lazuli, its associated stone.
Bhaishajyaguru (ch. Yàoshīfó 藥師佛; ja: Yakushi; ti: Sangye Menla) is one of the Buddhas of the past in Mahayana, as well as a tantric deity in Tibetan Buddhism. Theoretically, the number of Buddhas who have existed is immense, each having been in charge of a Kalpa, as an instructor and Master of the Law. They are often collectively described as the "Thousand Buddha" (chin. Qian Fo), and many caves (especially in China, in Dunhuang) were dedicated to them. He is the Buddha specialized in material and spiritual healing. He attained enlightenment on Vaidūryanirbhāsa (world similar to lapis lazuli). In this world located to the east, it is not to be confused with the eastern paradise of the dhyani Buddha Akshobhya, living next to him the bodhisattvas Sūryaprabha (Solar Clarity) and Candraprabha (Lunar Clarity).
According to the Sapta tathāgata-Pūrva praṇidhāna viśeṣa vistara (Sutra of the Vow of the Seven Tathāgatas) 4, Bhaśajyaguru has seven emanations5 representing seven different modalities of healing or protection.
Buddha Glorious Renown of Excellent Signs, Buddha King of Gold, Excellent and Immaculate, Joyful Radiant Who Fulfills Wishes, Precious Buddha King of Melodious Sound, Brilliant Radiance of Ability, Buddha King Supreme Glory Who Releases Suffering, Buddha Ocean Melodious Of The Proclaimed Dharma, Buddha King of the Clear Light Ocean of Wisdom of The Dharma. Sometimes Gautama joins the group, forming the set of Eight Buddha Doctors. Sixteen Boddhisatvas maculins (Manjoushri, Avalokiteshvara, Maitreya, Ksithigarbha, Akasagarbha, Vinaraviskambin, Samantabhadra) and feminine (Lasya, Puspa, Malya, Dupa, Gita, Aloka, Gantha, Nirthi), ten gods such as Indra, Brahma, Agni, Vishnu (probably Sarsvasti, Dirda, Shri), four Great Kings Gods Vaishravana, Dhirtrastra, Viroudhaka, Viroupaksa and twelve generals in armor, called yakṣa 6, each under his command seven thousand soldiers, help him fight diseases. The latter are Kumbhīra, Vajra, Mikila, Andira, Anila, Andila, Indra, Pajira, Mahorāga, Kinnara, Catura and Vikarāla.
The most common rite is to read one's vow 49 times, light 49 votive lamps and extend paper prayer flags for 49 days in a row.
Traditionally the recitation of his mantra (Namo Bhagavate Bhaiṣajya-guru-vaiḍūrya-prabhā-rājāya Tathāgatāya Arhate Samyak-sambuddhāya. Tadyathā, om, bhaiṣajye bhaiṣajye Bhaiṣajya-samudgate svāhā.) is practiced using a mala made of 108 lapis lazuli pearls. Lapis lazuli (Na, Ca)8(Al, Si)12O24S2 FeS-CaCO3, is a metamorphic rock, containing silicates of the feldspathoid group.
It is best known as ornamental stone, opaque, blue in color, between azure and overseas. Its use is very old, dating back 7,000 years. The best deposits are in Afganisthan, Badakhshan province.