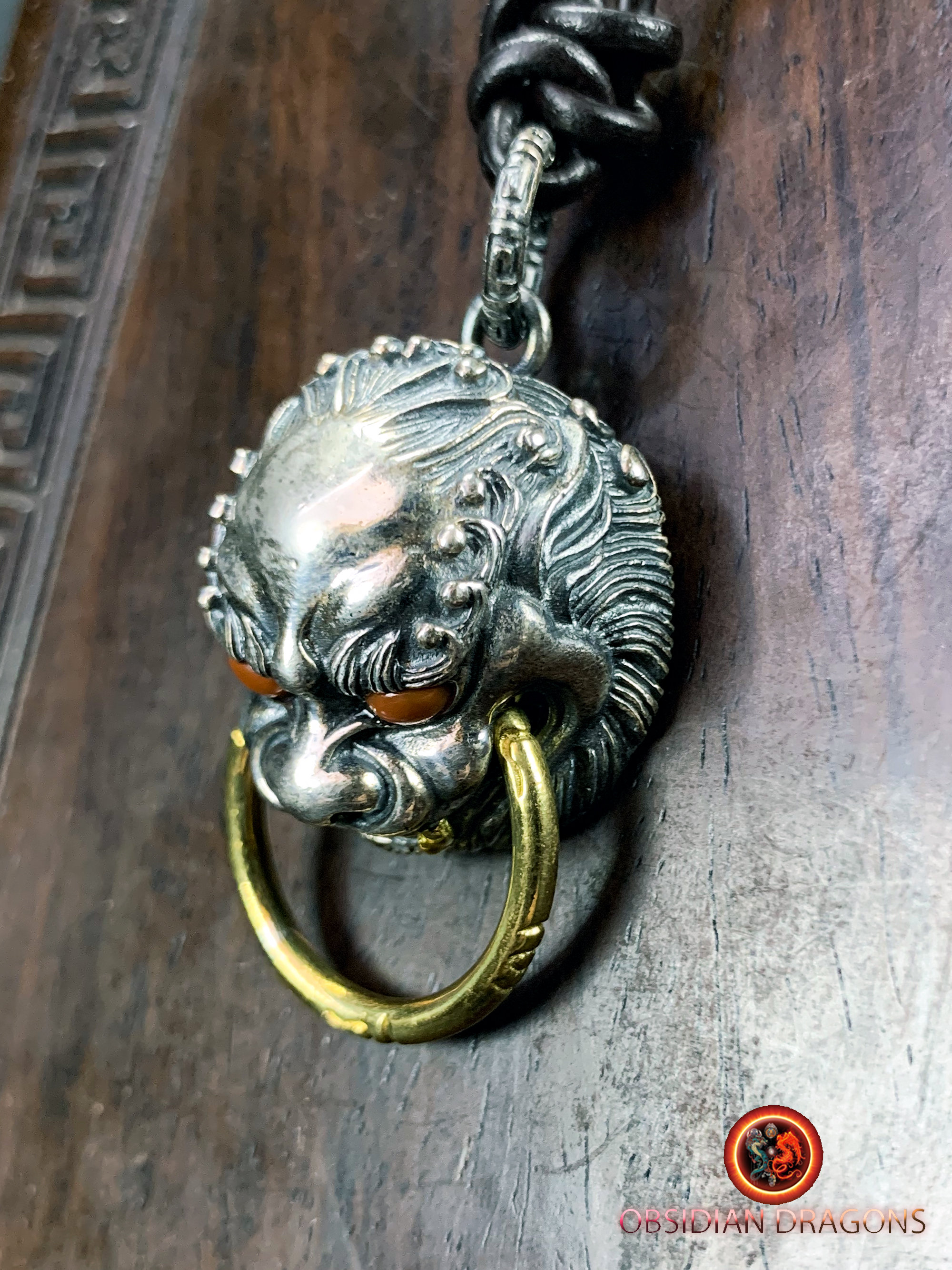 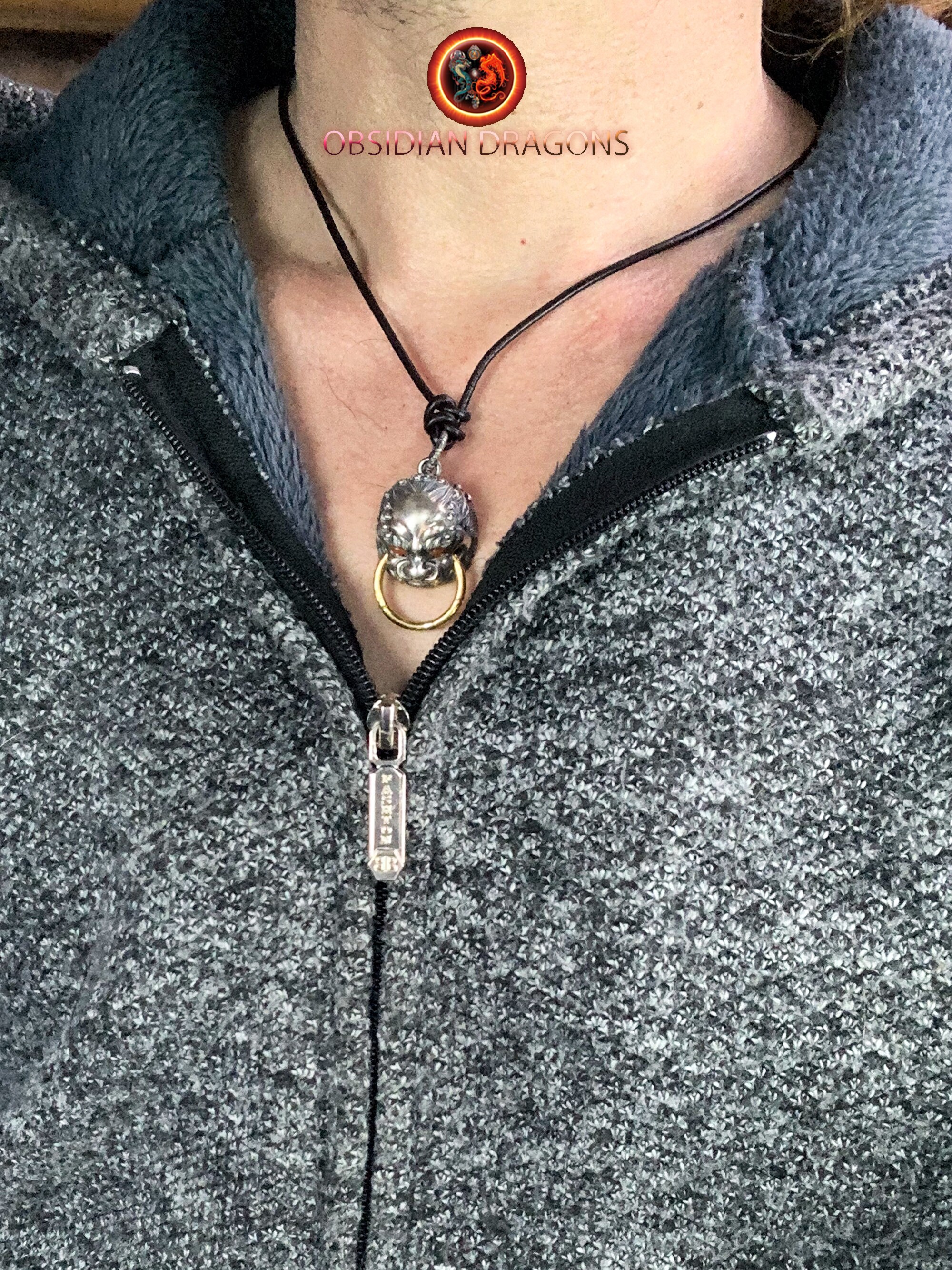 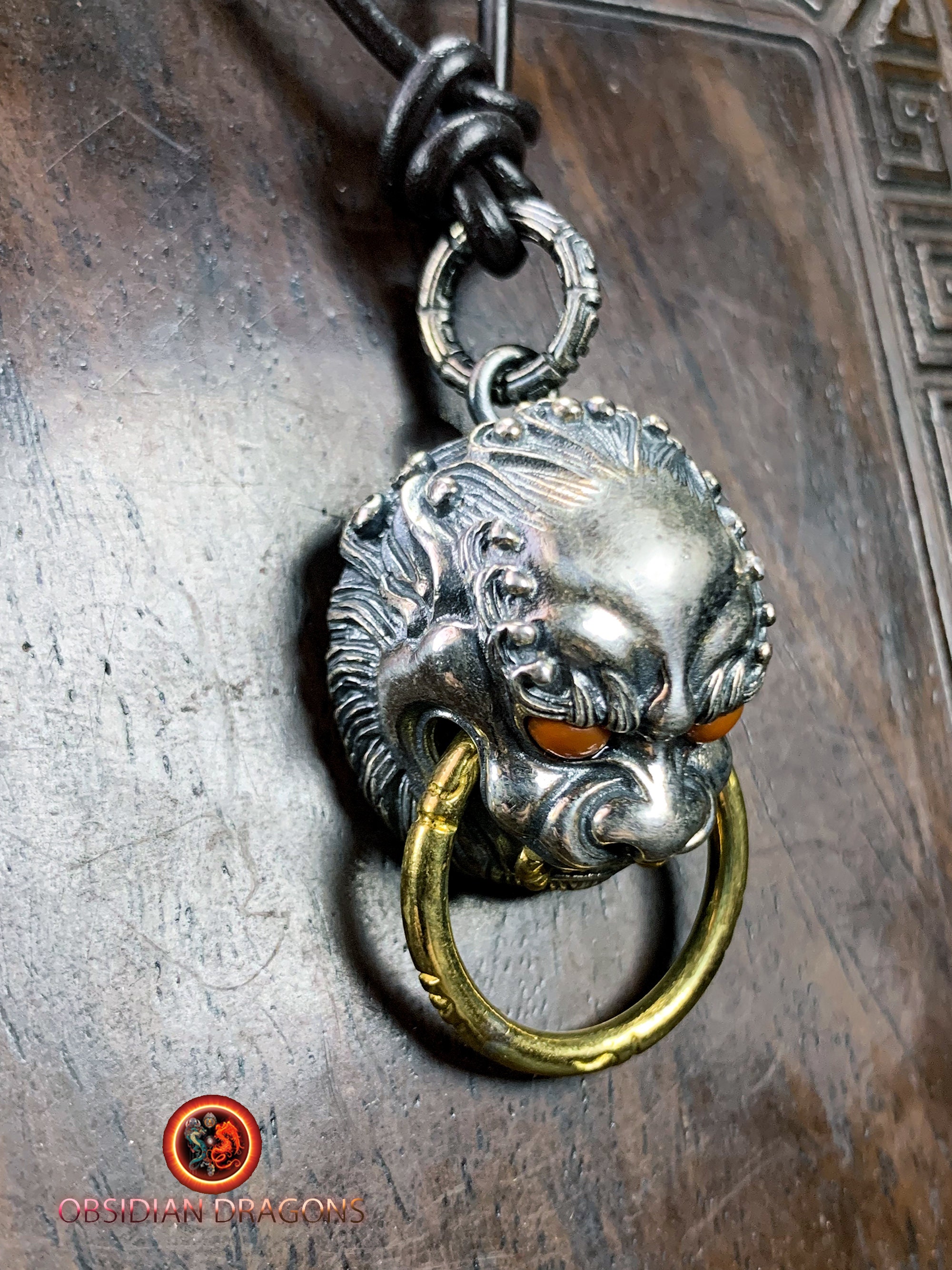 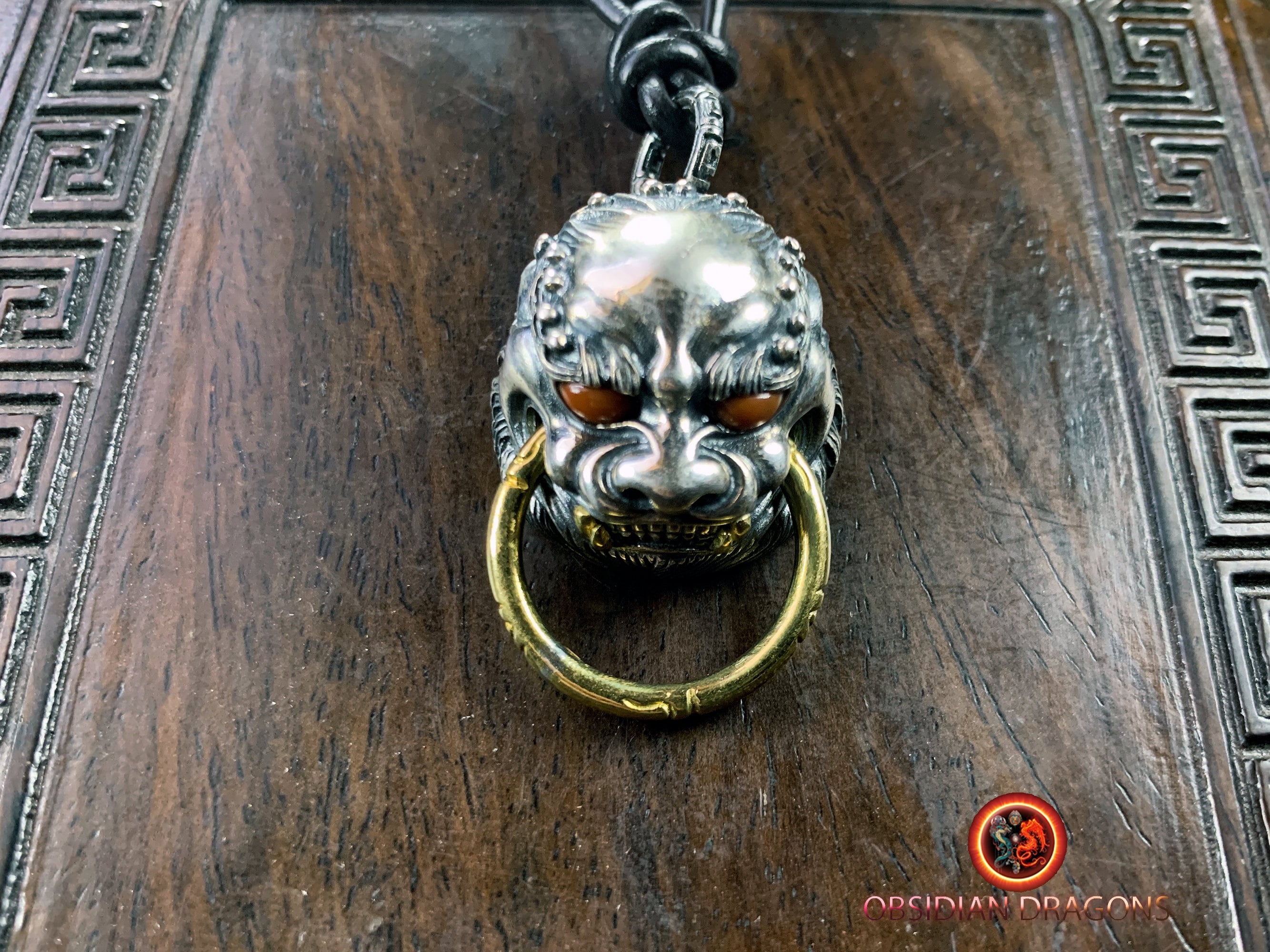 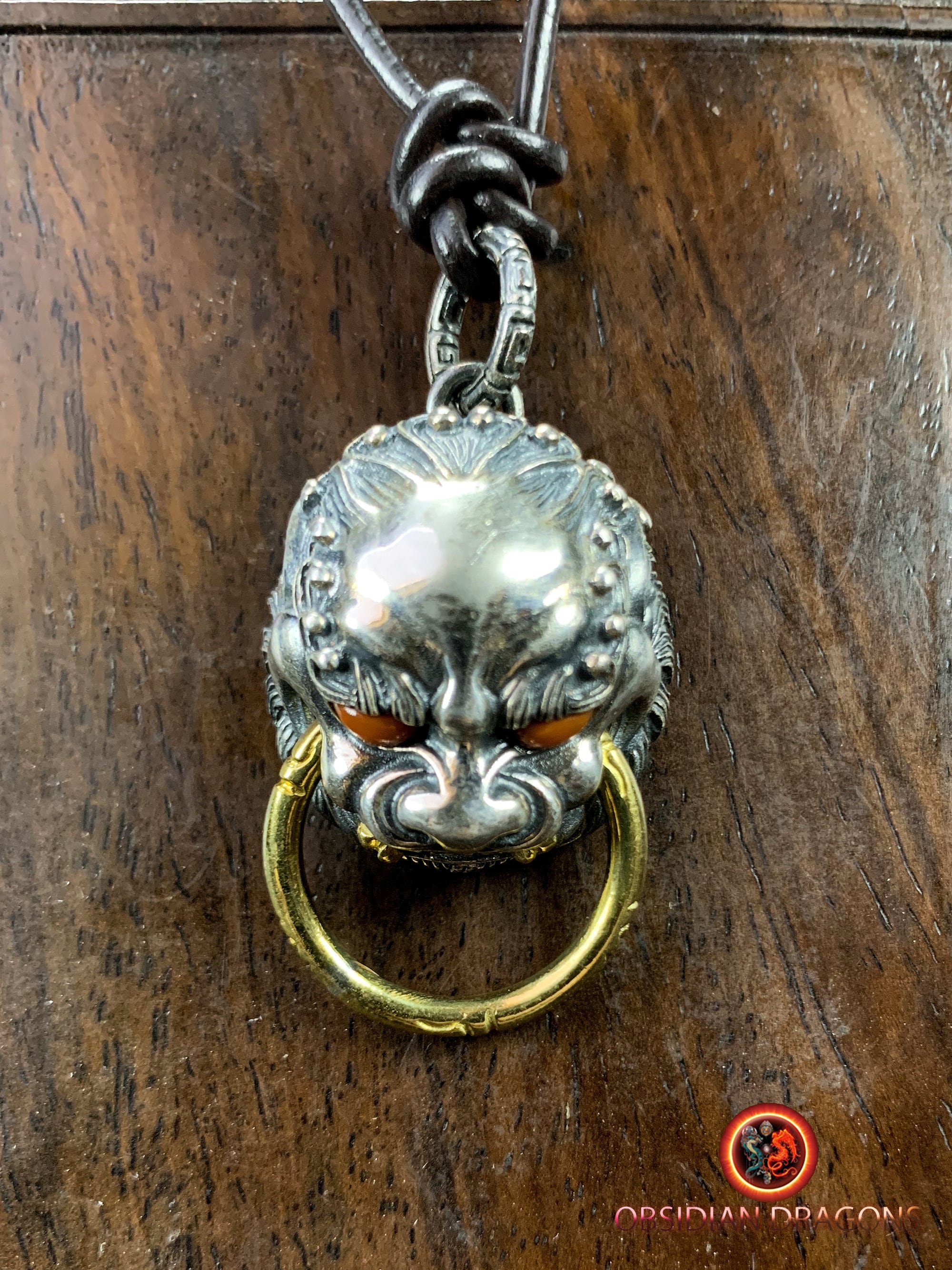 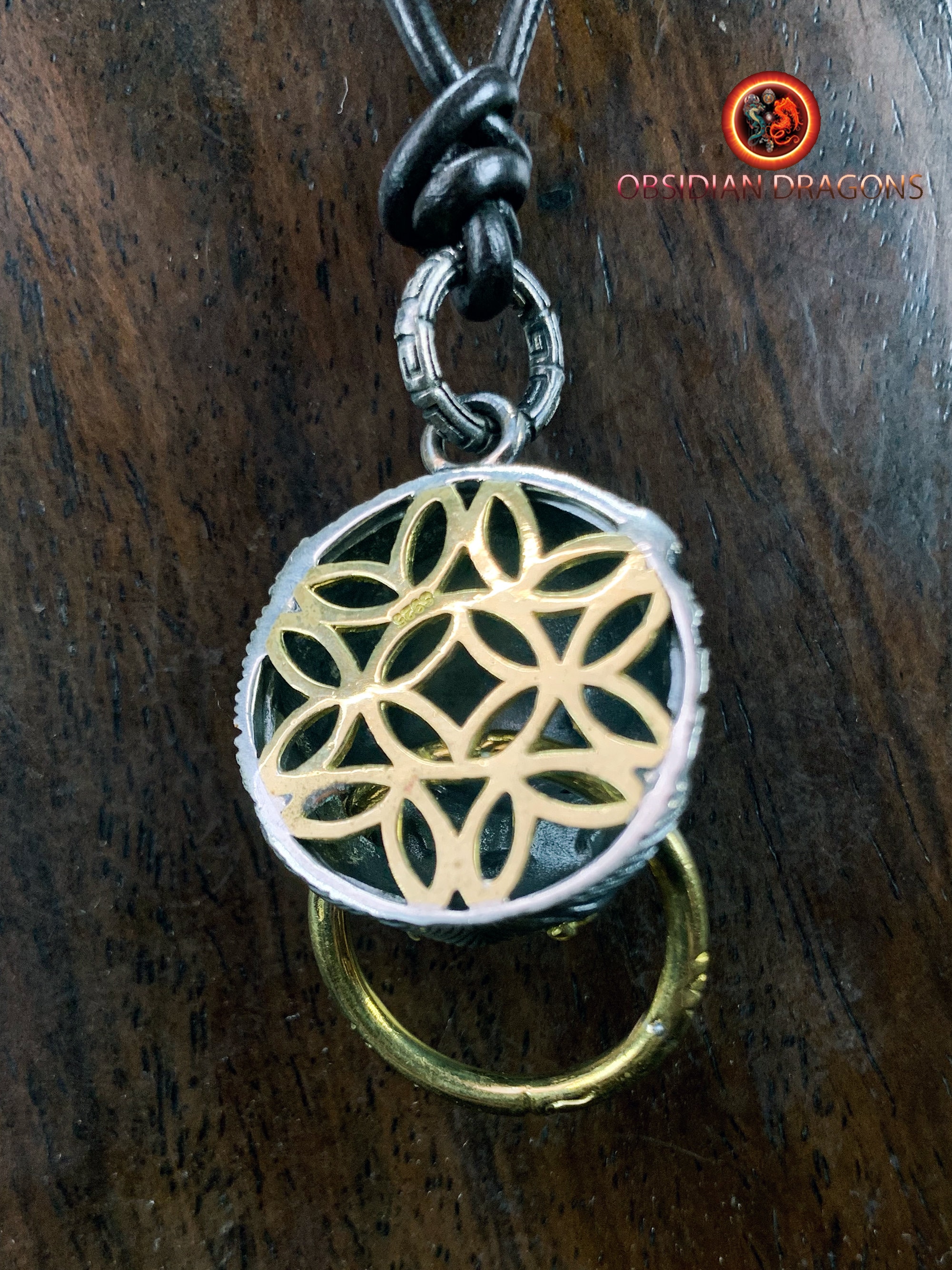 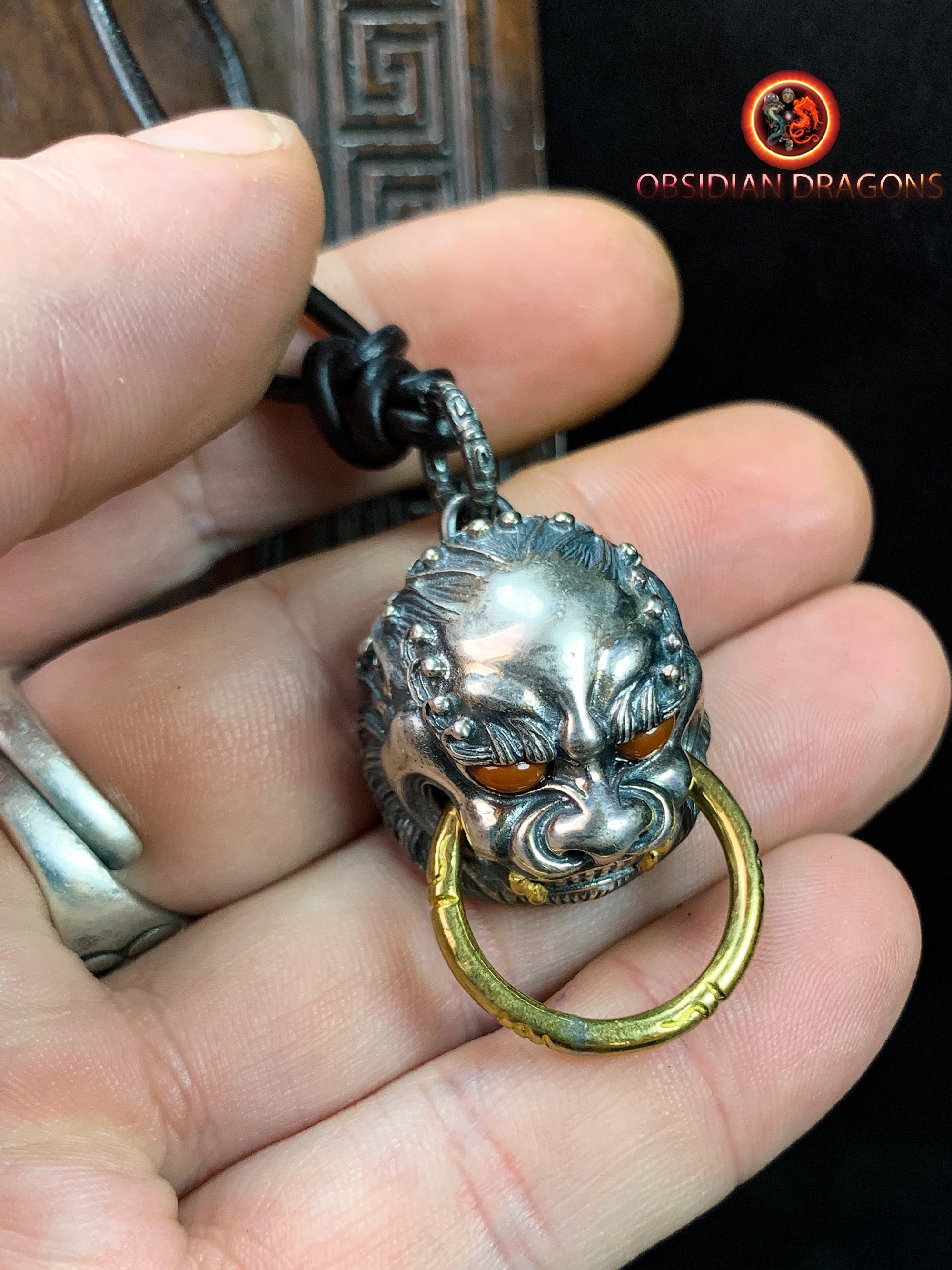 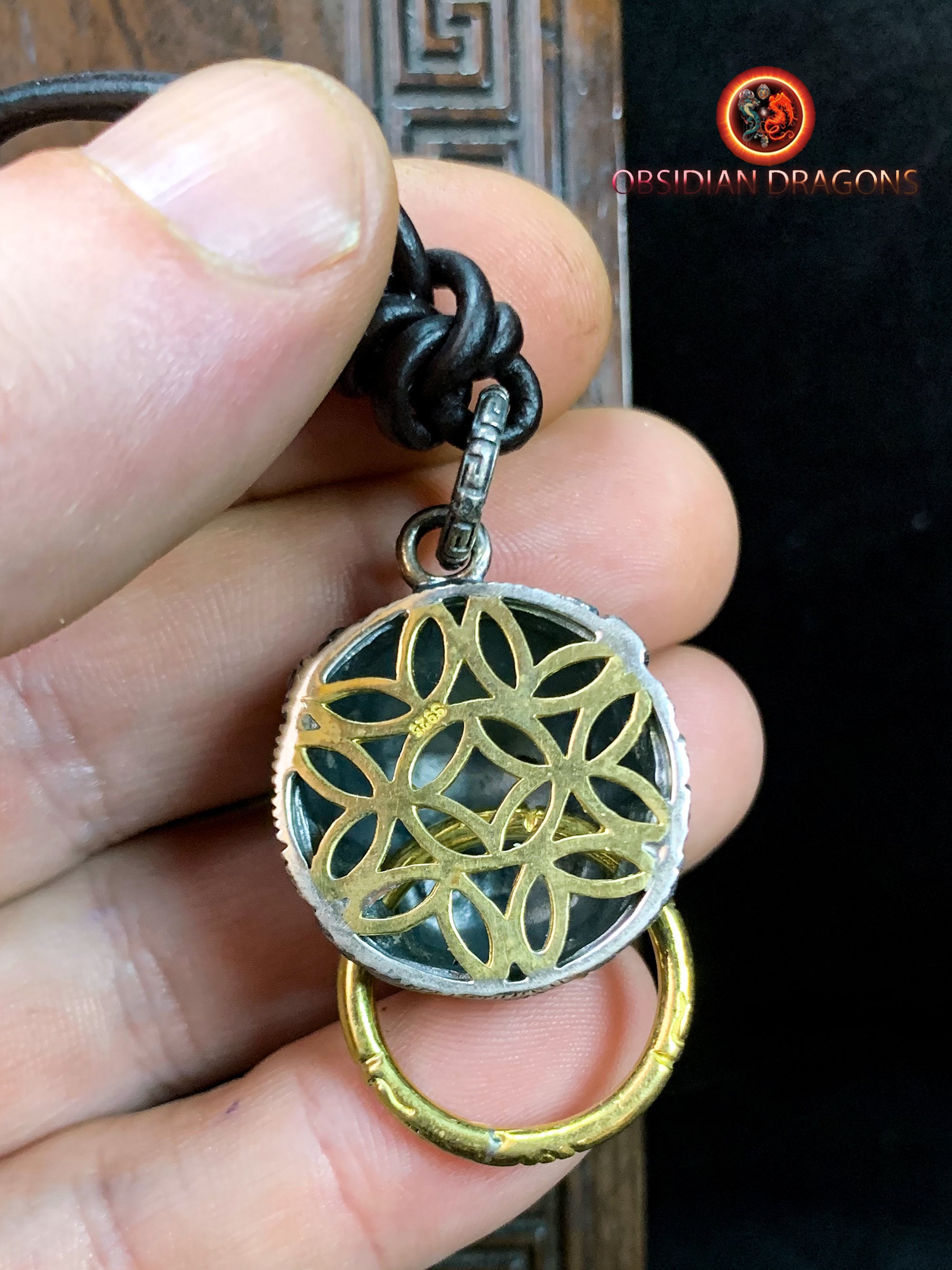 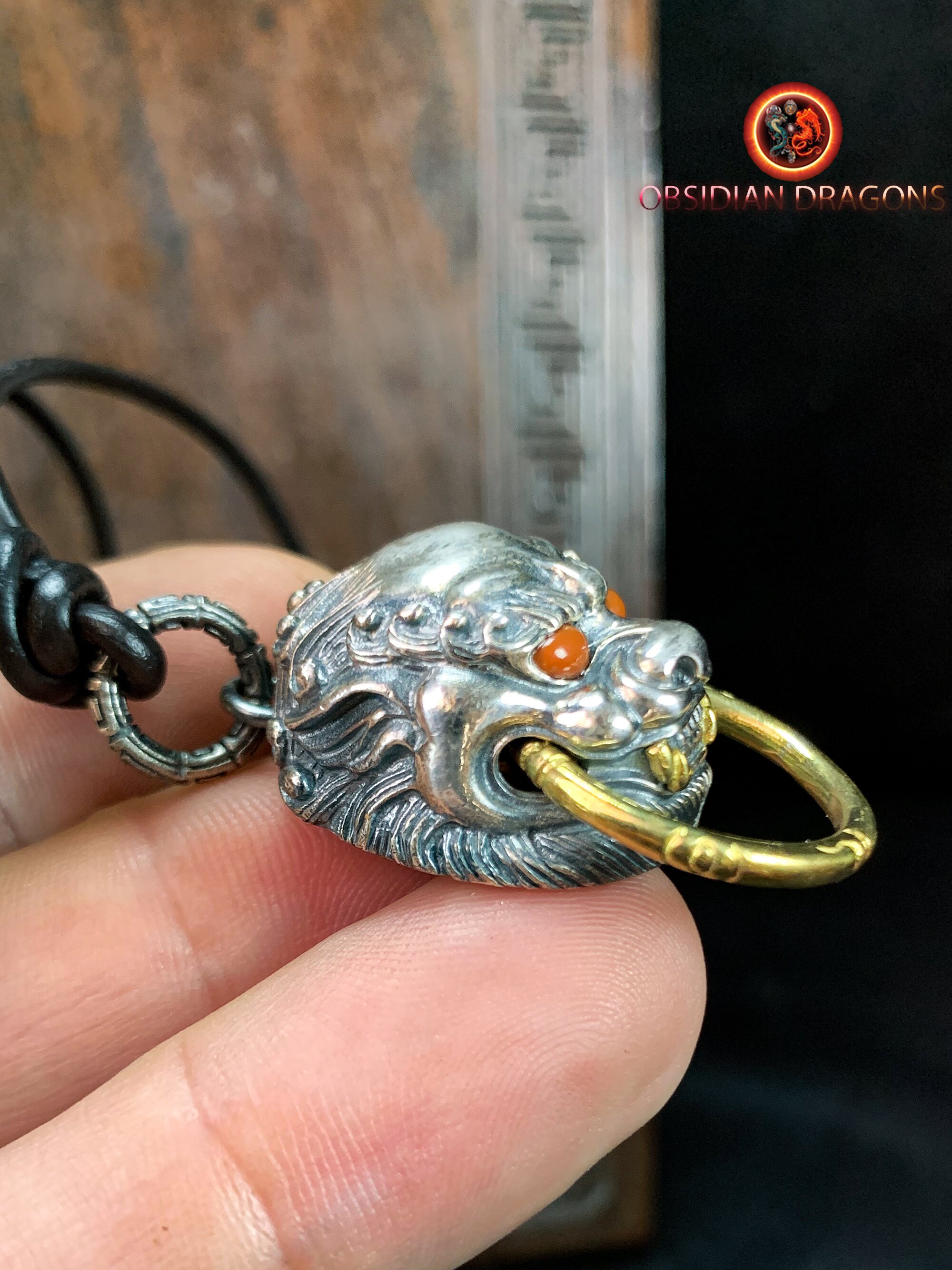 Dimensions of the pendant: 43mm high by 25mm wide by 15mm deep
Weight of 20 grams

Our entire collection "Taoist protections" can be consulted by clicking on this link
https://www.etsy.com/fr/shop/obsidiandragons?ref=seller-platform-mcnav&section_id=23908621

Our entire shop can be consulted by clicking on this link
https://www.etsy.com/fr/shop/obsidiandragons?ref=seller-platform-mcnav


The "guardian lions" (石獅/ "Stone Lions"), sometimes called "Fu dogs" (福獅) in the West, are a common representation of the lion in pre-modern China, symbols of protection in the philosophy "Feng Shui" (風水), reputed to attract happiness and fortune. It is also a protective animal of the "Dharma" (法 / "Buddhist law") and sacred buildings, symbolizing peace and prosperity. Presented in pairs, they sit at the entrance of imperial palaces and tombs, temples, houses of officials (rich dignitaries, nobles or "mandarins" [官]) of the "Han dynasty" (漢朝), serving, for the latter, to testify to the social status of the residents. Nowadays, pairs of guardian lions are also used ornamentally, at the entrances of restaurants, hotels, supermarkets and other buildings.

As early as 208 BC, the Buddhist version of the Lion was adopted in China as the protector of the "dharma" and was declined in religious art. Gradually, they were incorporated into Chinese architecture to embody the notions of power and authority by being placed at the entrance of imperial buildings and then those of temples. There are different styles of guardian lions that reflect influences from different historical, dynastic, and regional periods. These styles vary in their artistic details and the care given to ornaments as well as in expressions, sometimes fierce, sometimes playful. Although the appearance and morphology of guardian lions varied throughout Chinese history, their appearance and posture eventually standardized during the "Ming" (明朝) and "Qing" (清朝) dynasties in the form we know them today.

In Japan, these same lions are better known as "ShiShi" (獅子/ "lions"), "Kara shisi" (唐狮子 / literally "Tang Lions" or "Chinese Lions") or "Koma Inu" (狛犬 / "Korean dogs") introduced to Japan by the kingdom of "Koryo" (高麗 / old Japanese term for the Kingdom of Korea). On the "Okinawa archipelago" (沖縄諸島), there is also a regional variant called "Shisa" (シーサー) used in the same way as Gargoyles in the West, aimed at repelling harmful influences.

In the same way as in China, Koma Inu is found at the entrance of many "Shinto shrines" (神社 / "Jinja"), Buddhist temples, noble residences or even in private homes. They are divided into two categories: the first, which appeared during the "Edo period" (江戸時代), is called "SanDo Koma Inu" (参道狛犬), and the second, much older, called "JinNai Koma Inu" (陣内狛犬). Designed to ward off evil spirits, these statues resemble those of Chinese lions, except for a few details, but retain the symbolism and characteristics of the latter. Indeed, the male has an open mouth, while the female keeps it closed. This tendency, however, not being of Buddhist origin, has a symbolism attached to the first and last sound of the Sanskrit alphabet. The open-mouthed statue symbolizes the sound "Ah" (阿形/ "A-Gyo"/first syllable in Sanskrit), while the closed-mouthed statue symbolizes the sound "Hum" (吽形/ "Un-Gyo"/last syllable in Sanskrit), both representing the "beginning and end of all things". Jointly called "A-un" (阿吽), they form the sound "Öm" (唵/ॐ), a sacred syllable in several religions such as Hinduism, Buddhism and Jainism. There are, however, exceptions to the rule in which both Koma Inu have their mouths open or closed. However, other styles feature two lions with a pearl in their respective mouths, just large enough to be contained without ever being able to be removed.