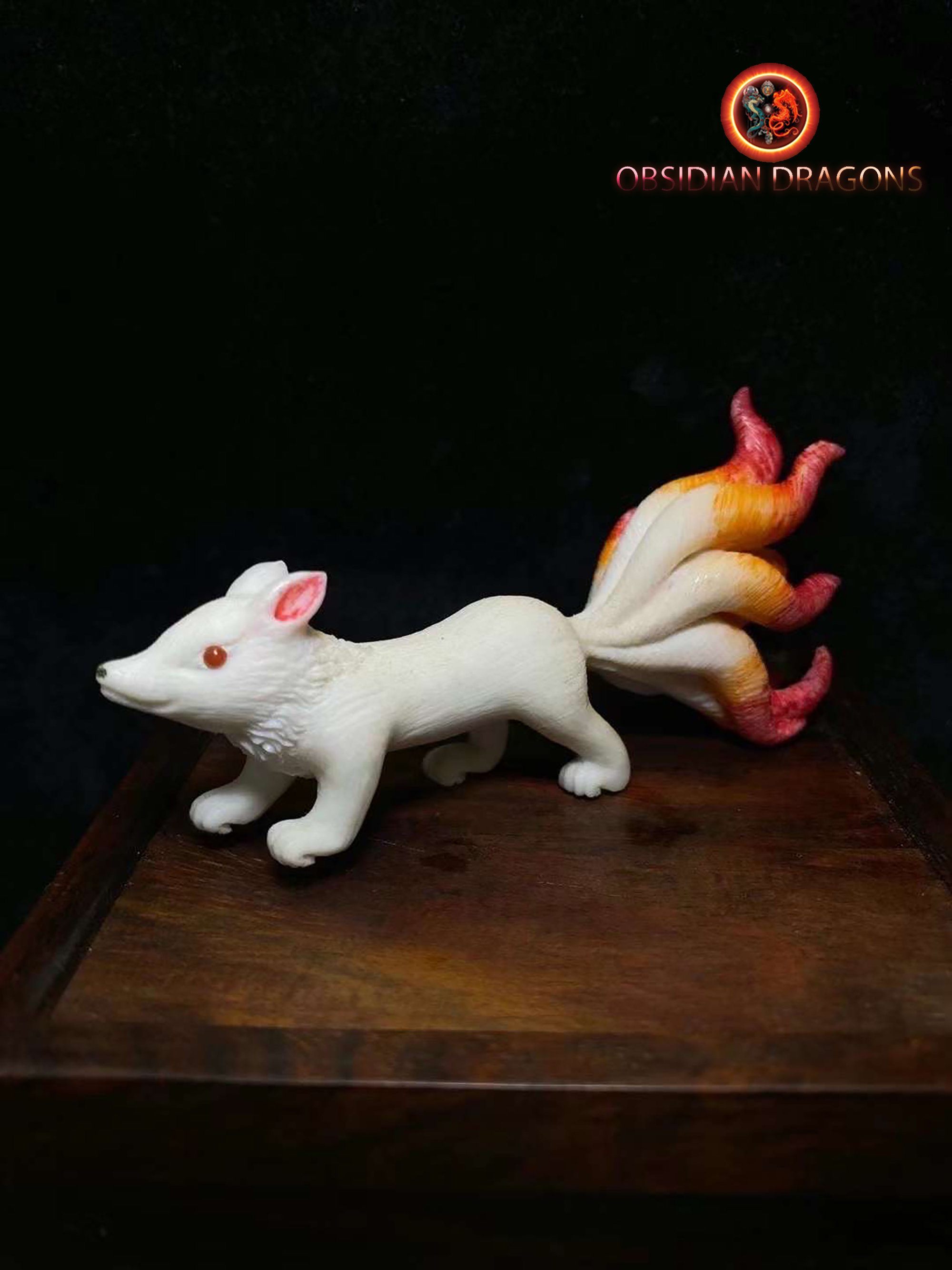 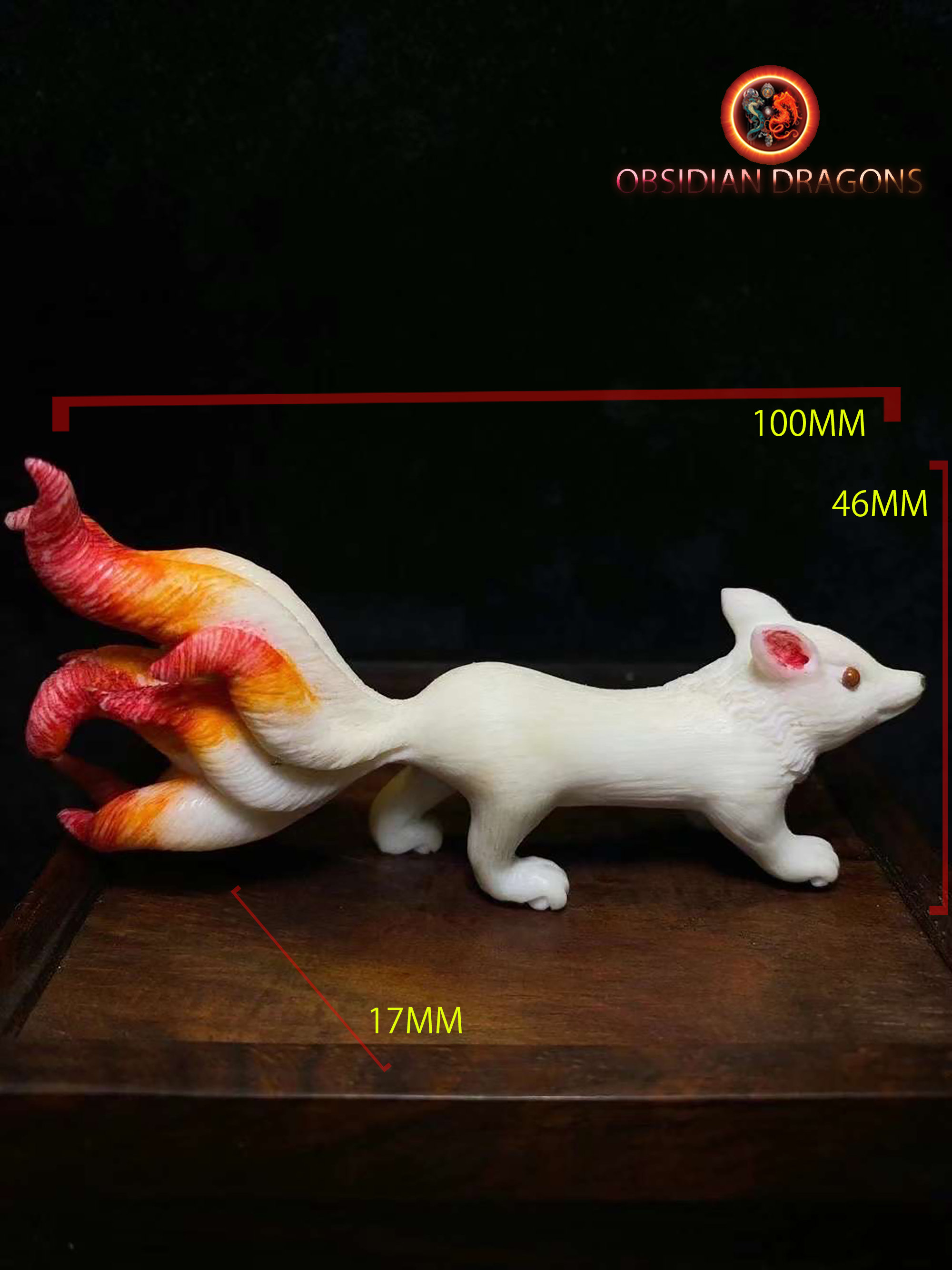 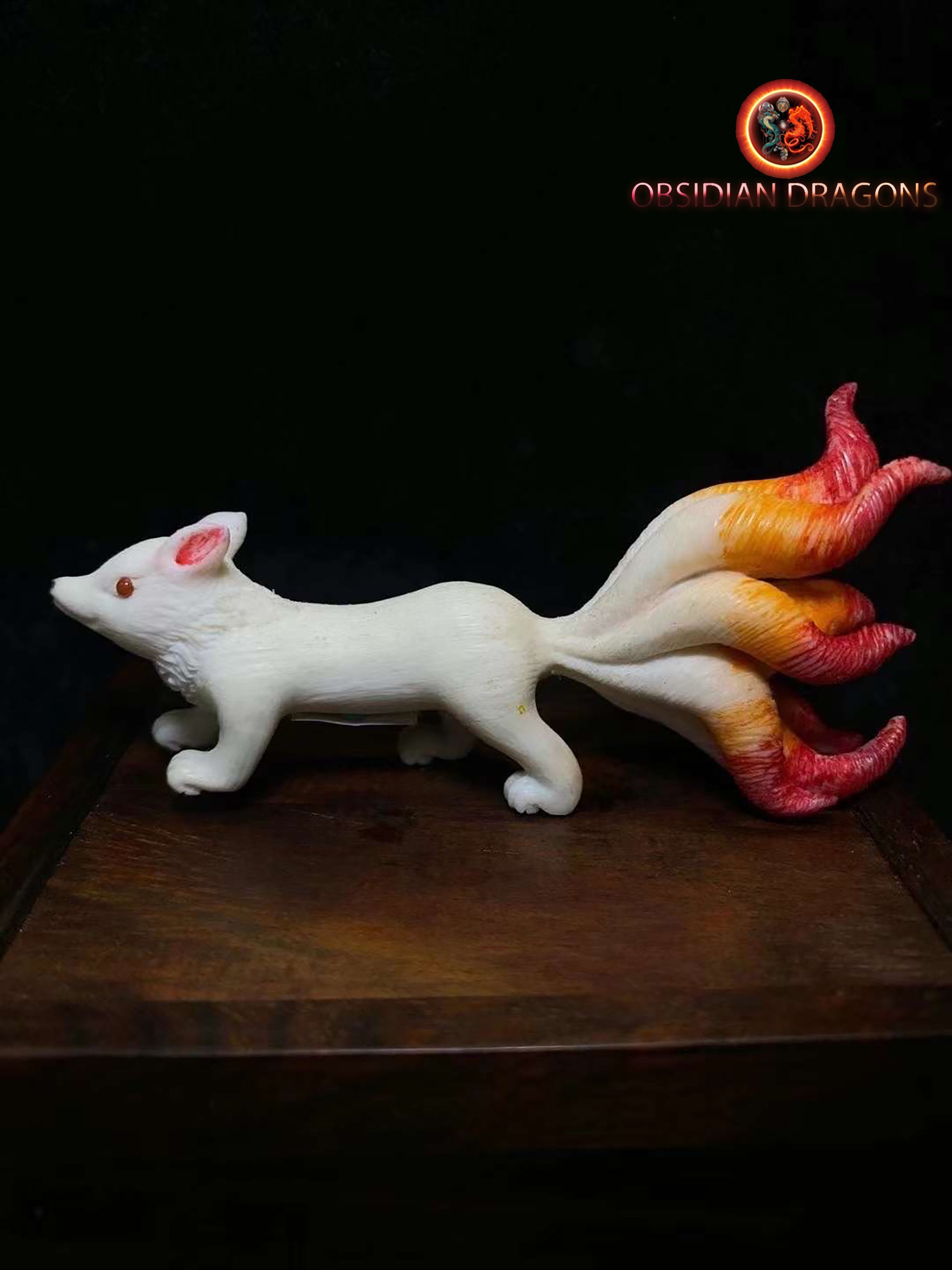 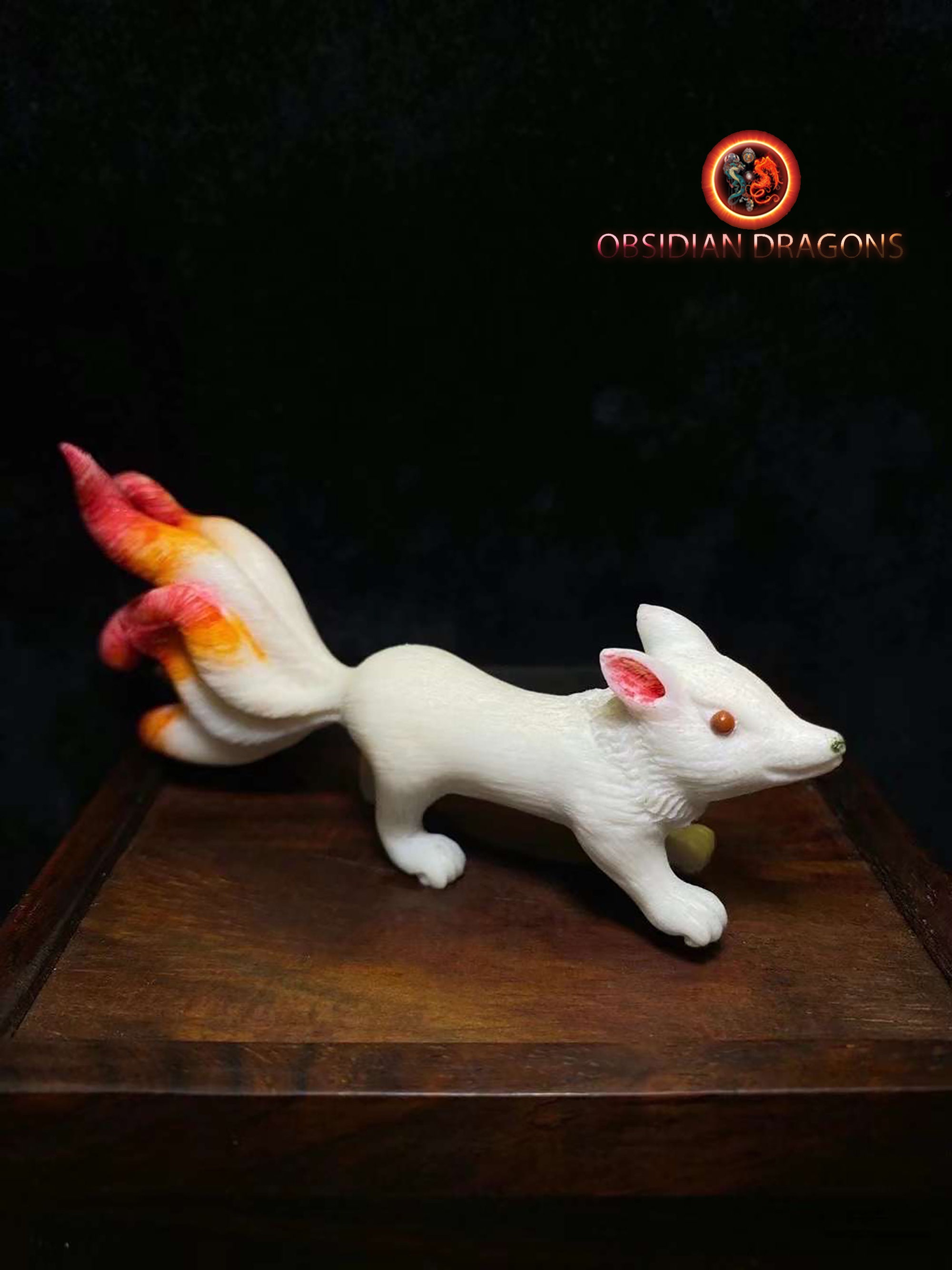 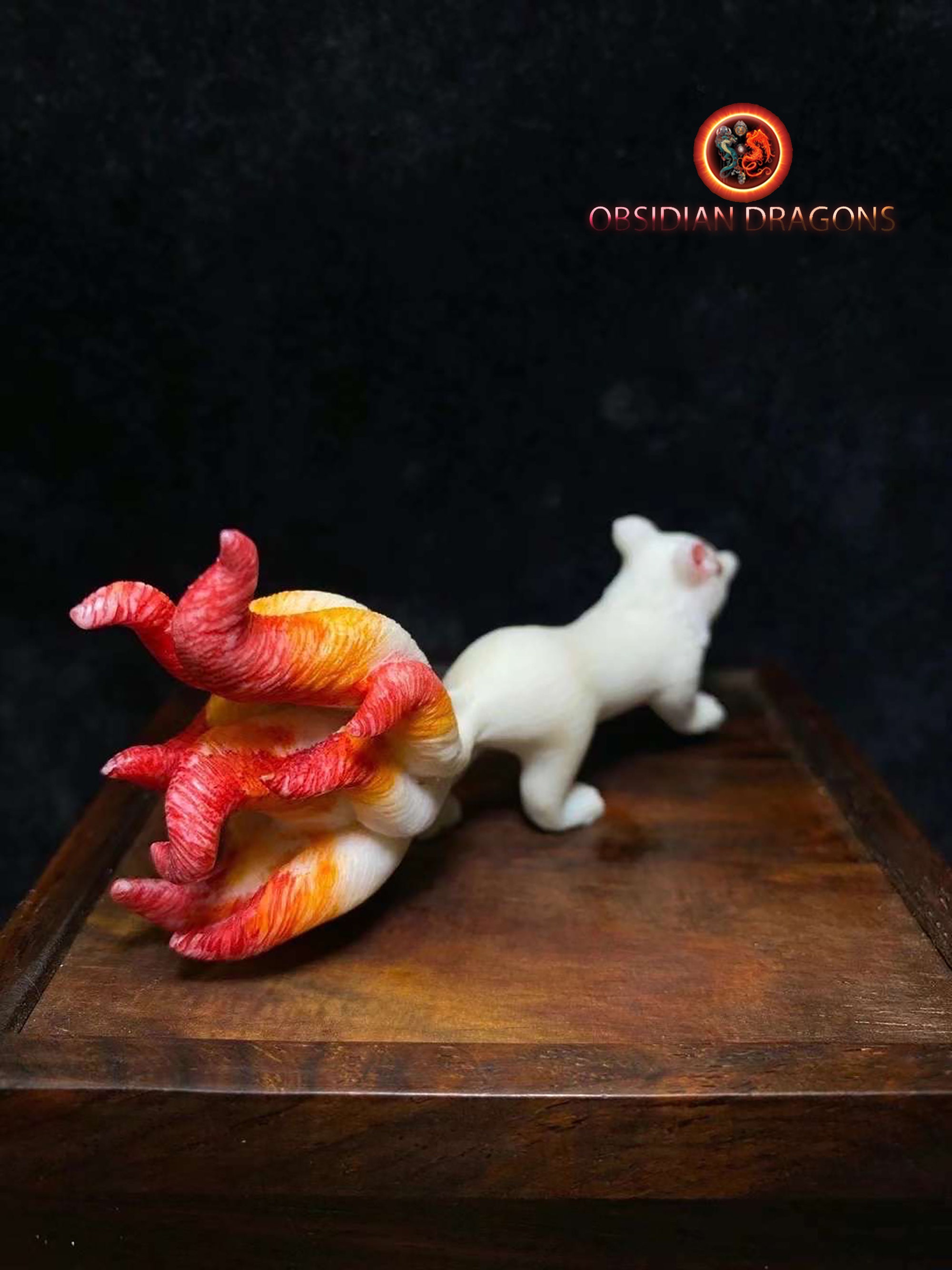 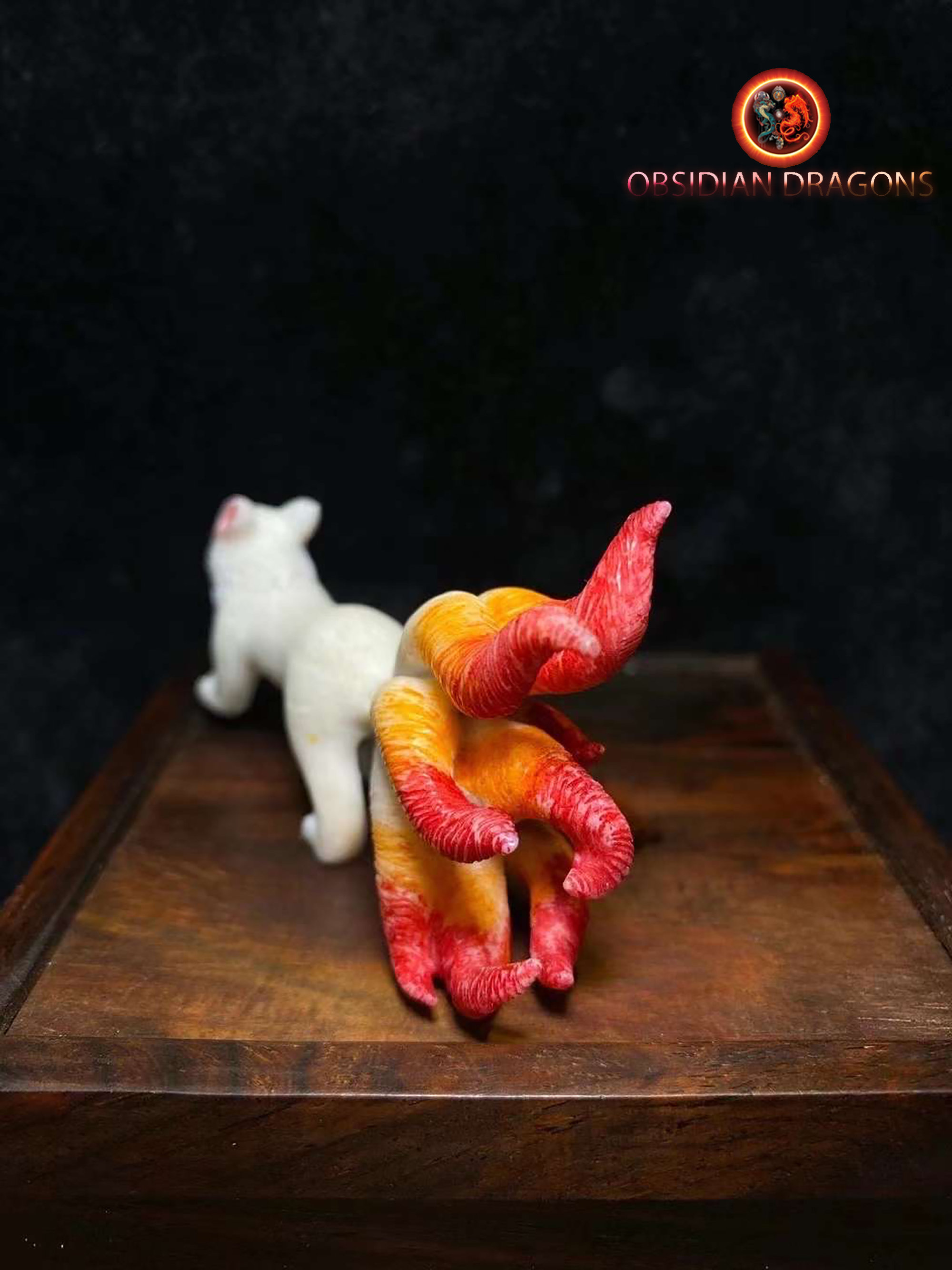 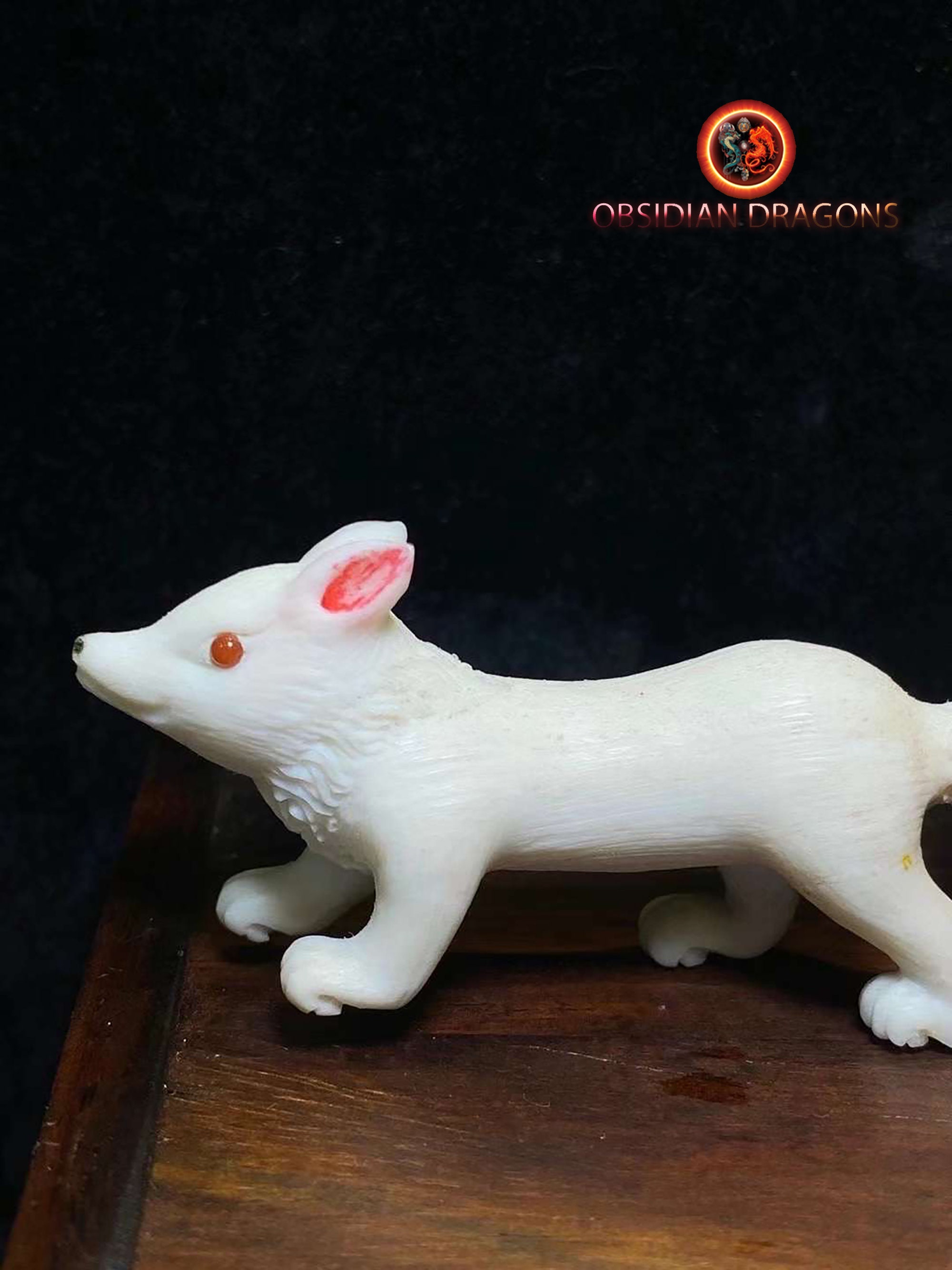 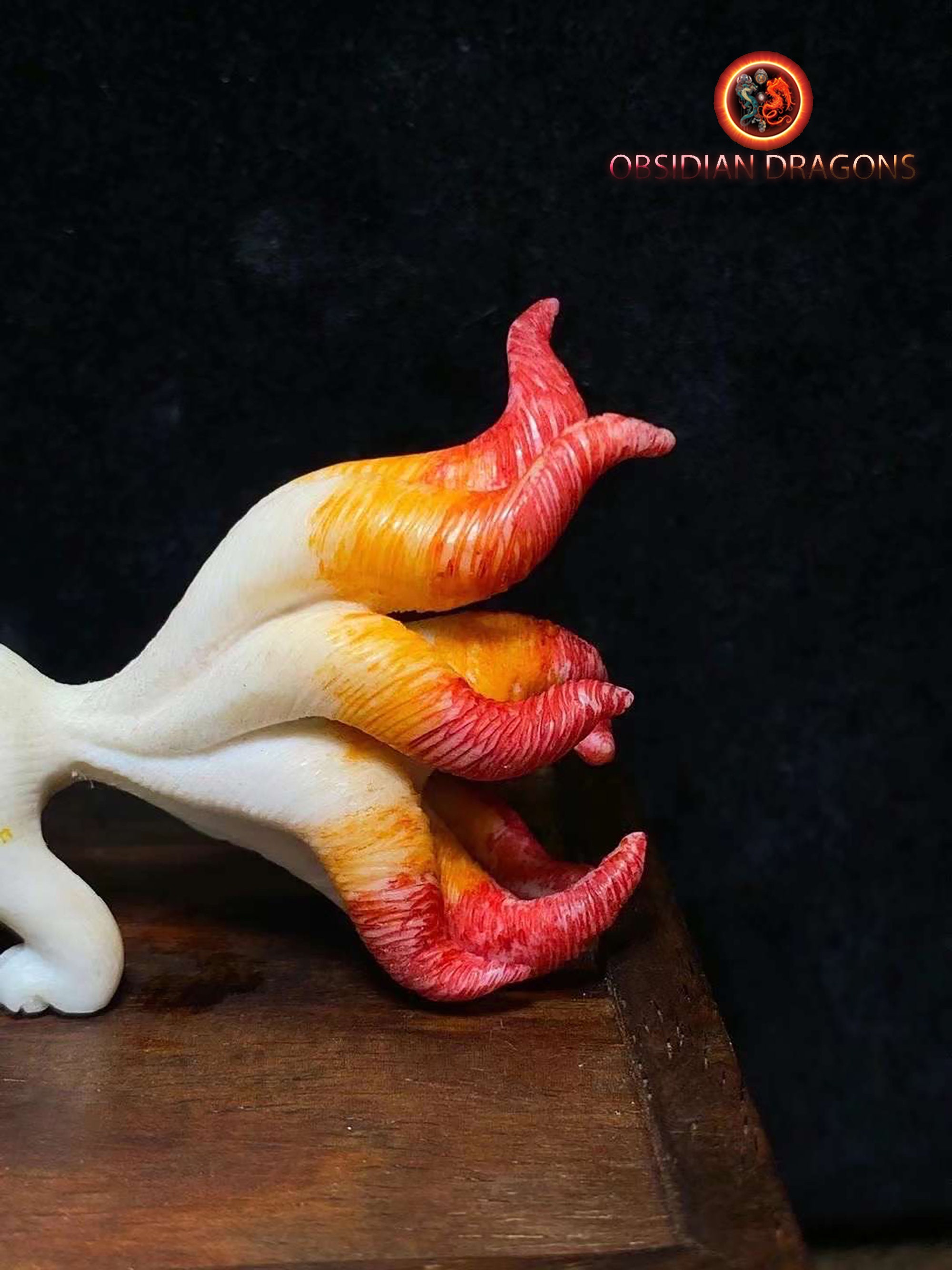 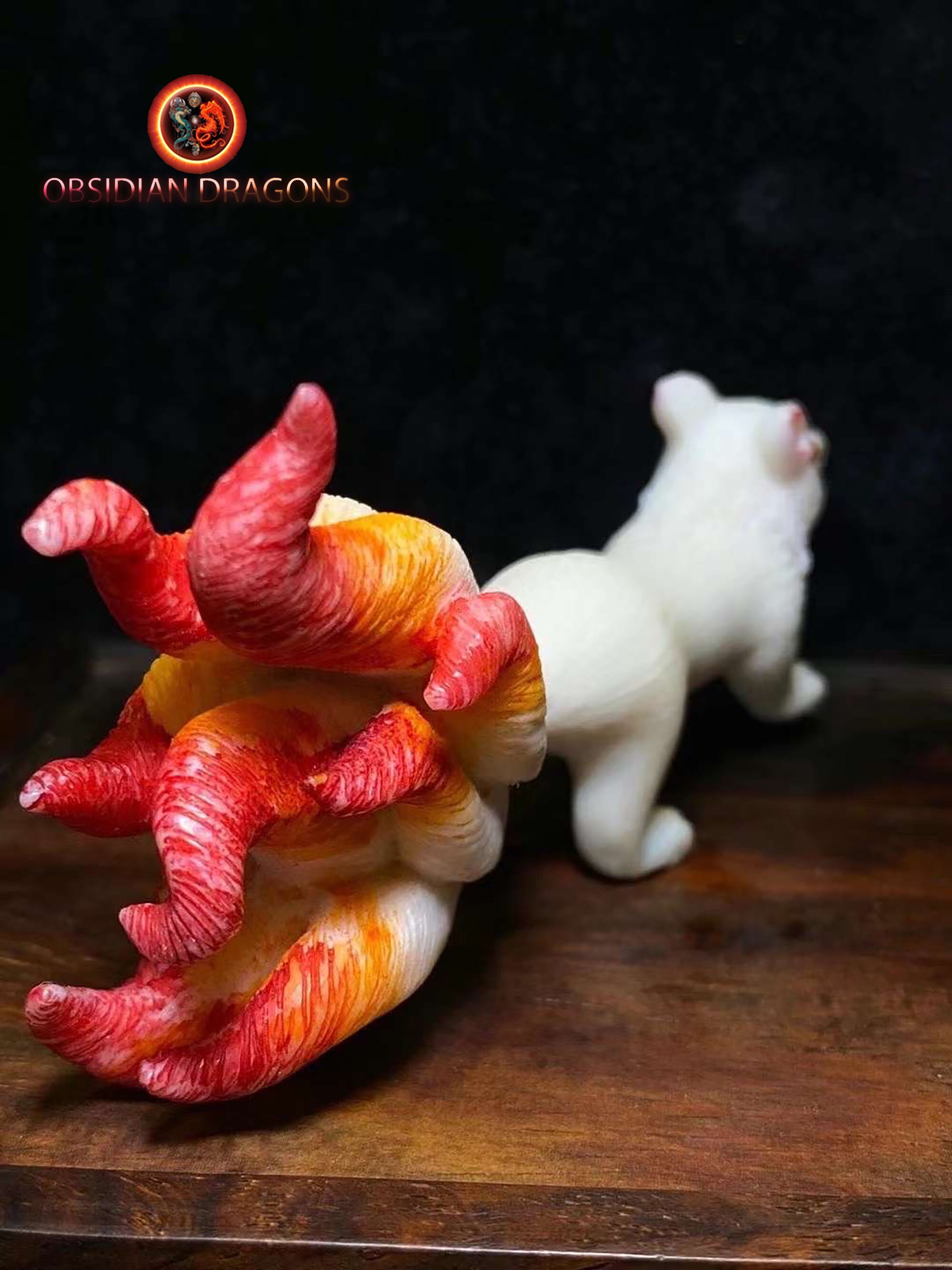 Deer antler entirely carved by hand by a master craftsman specialized in the carving and painting of netsukes in deer antlers.
The deer antler is of course harvested at the fall of these once a year in spring.
Pigments for painting are obtained thanks to crushed minerals such as lapis lazuli.
Rare and unique piece for collector

To discover our entire shop, please click on this link
https://www.etsy.com/fr/shop/obsidiandragons?ref=seller-platform-mcnav

The fox-woman is a recurring Chinese character in Pu Songling's fairy tales titled Liáozhāi zhìyì
It is about a fox who metamorphoses into a charming and pleasant girl to seduce the heroes the fox-woman is described as a spirit sometimes dangerous, sometimes beneficial.

The nine-tailed fox, called Gumiho (구미호) in Korean, Kyuubi (九尾) in Japanese or Jiuweihu (九尾狐) in Chinese, is a very particular fox of Asian folklore and has almost always been described as an evil entity. In Korea in particular, one can find many tales about him; it is said that a fox that lives a thousand years can then transform into Gumiho, a demonic being who has the ability to modify his external appearance, most often into a beautiful young woman with the intention of seducing men to finally eat their liver and heart!

In Japan, the nine-tailed fox is part of the so-called Kitsune, supernatural spirits in the form of foxes. Some tales relate that these Kitsune can have up to nine tails and they would develop a new one every hundred years. As a result, the more tails a Kitsune has, the older and more powerful it is. The most powerful nine-tailed foxes might even hold the power to see and hear everything that is happening in the world.

In Chinese mythology, it is believed that all things are capable of acquiring human forms, magical powers and immortality, provided that the Moon and Sun provide them with enough energy, in certain forms, such as breath or the essence of man.

The spirits of the foxes encountered in tales and legends are usually women who appear as young and beautiful. In Chinese mythology, one of the fox spirits with the worst reputation was Daji portrayed in the Ming novel The Investiture of the Gods (Fēngshén yǎnyì). She is the daughter of a general, very beautiful, who was forcibly married to the cruel tyrant Zhou Xin. The spirit of a nine-tailed fox who has been in the service of Goddess Nüwa, whom Zhou Xin had offended, takes possession of the wife's body, expelling Daji's true soul. With her new husband the spirit, in the guise of Daji, imagines all possible cruelties and invents many ways to torture, for example forcing honest officials to seize metal pillars worn red. Such cruelties led to the revolt of many people, including former generals of Zhou Xin themselves, who revolted and fought against the Shang dynasty, that of Zhou Xin. Eventually, King Wen of Zhou, one of Shang's vassals, founded a new dynasty named after his country. The fox spirit in Daji's body was later driven out by Jiang Ziya, the first head of government of the Zhou Dynasty, and his spirit condemned by Nüwa herself for its excessive cruelty.

In Korea, the Gumiho is still considered an evil creature that wishes to suck the vital energy of men. For this, the Gumiho use a pearl named 여우구슬 (Yeowu Guseul), literally the pearl of the fox. This pearl would contain all the power of the creature and bring knowledge and intelligence to human beings who would agree to swallow it. The Gumiho, transformed into beautiful women, usually offer this pearl to men eager for power by kissing them, pearl that will then absorb their vital energy and will serve the thirst of the fox when the latter recovers it.