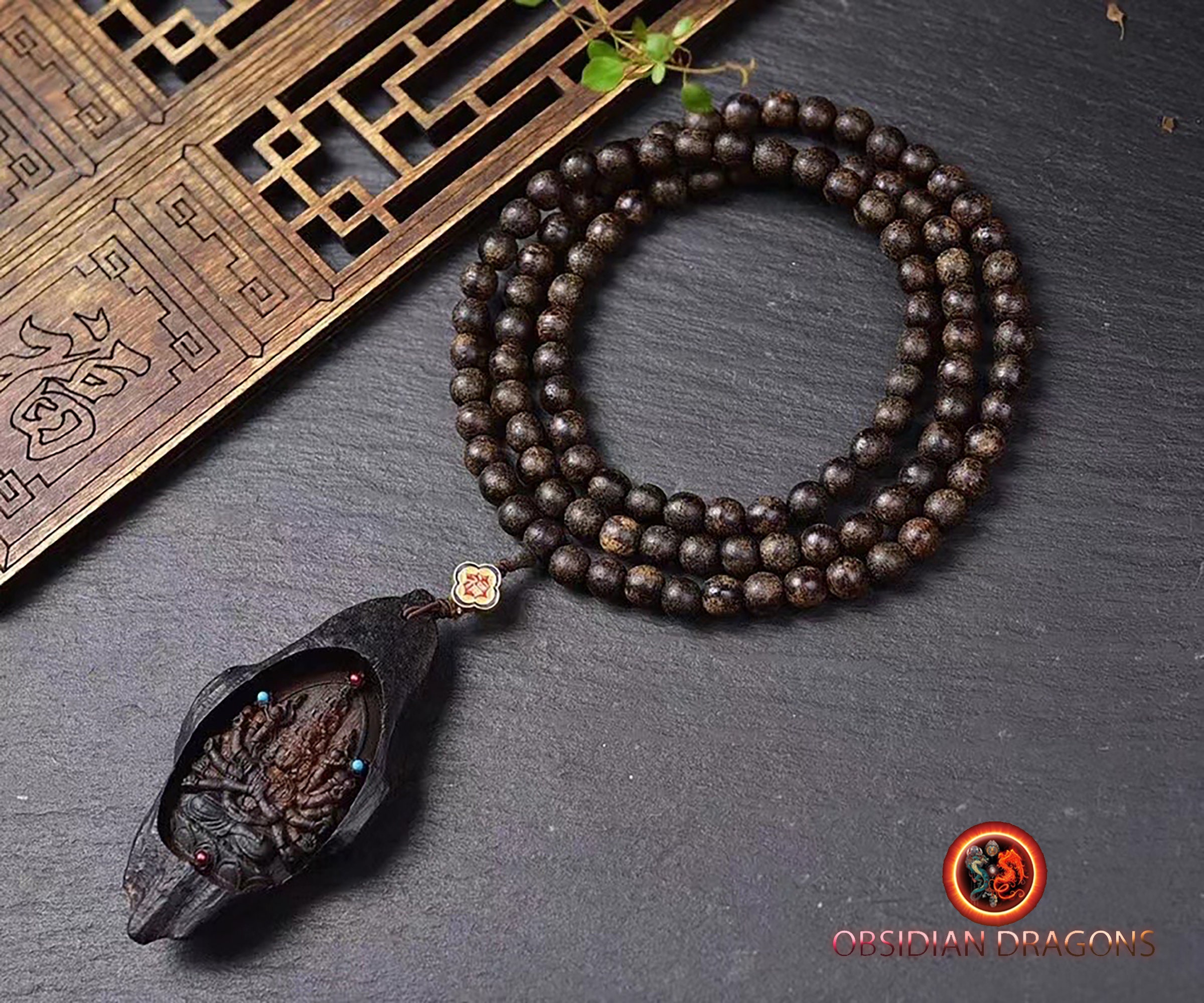 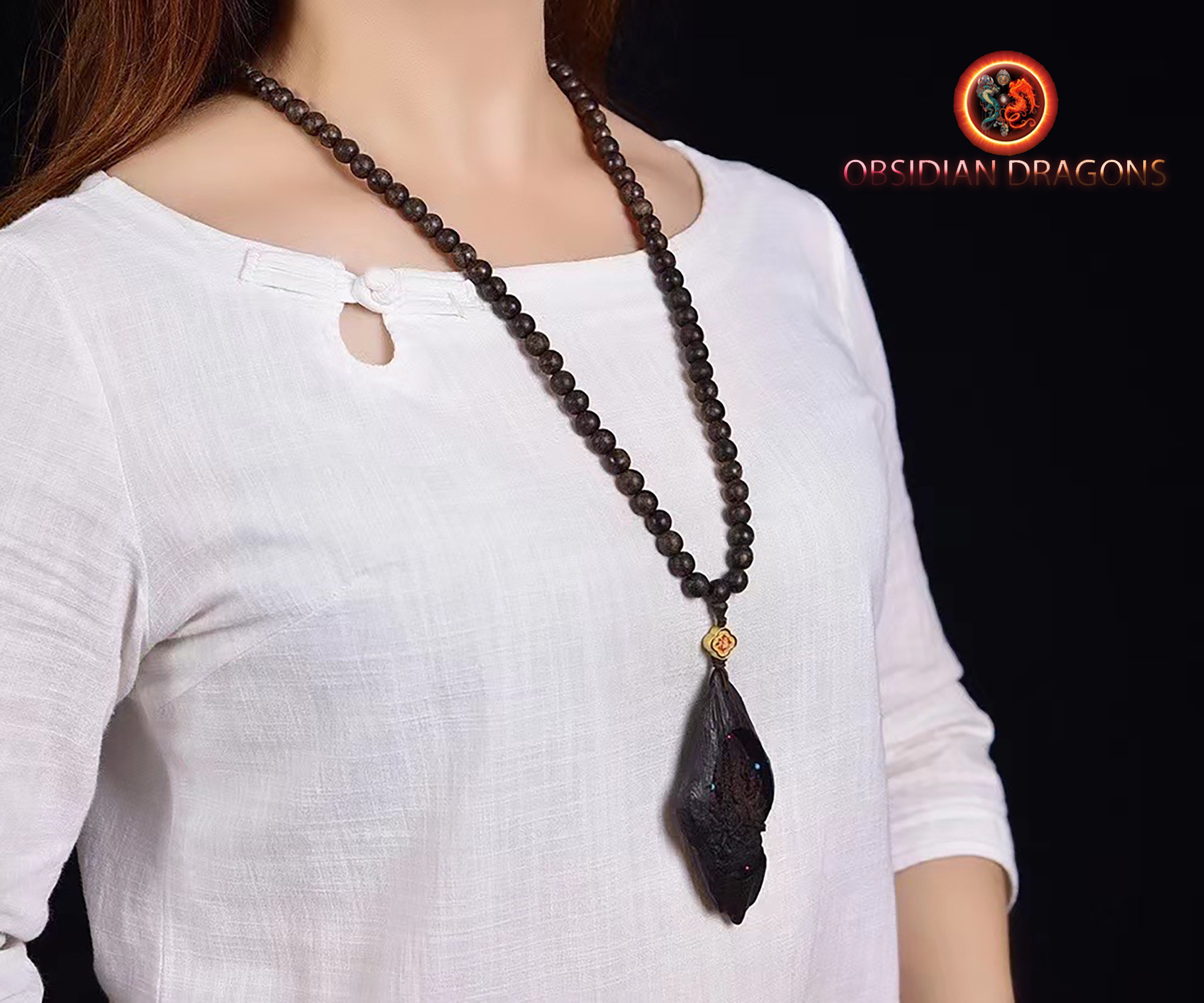 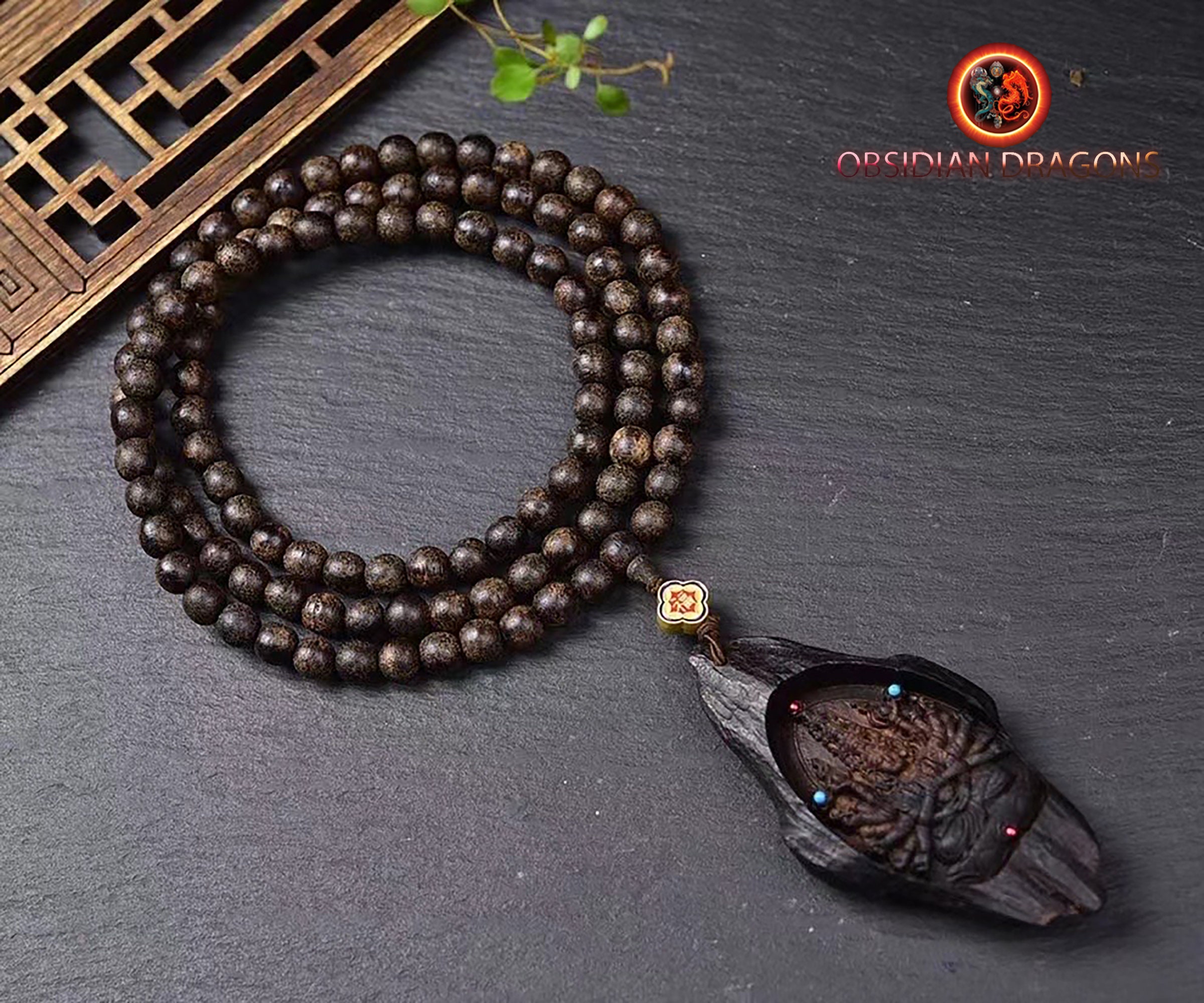 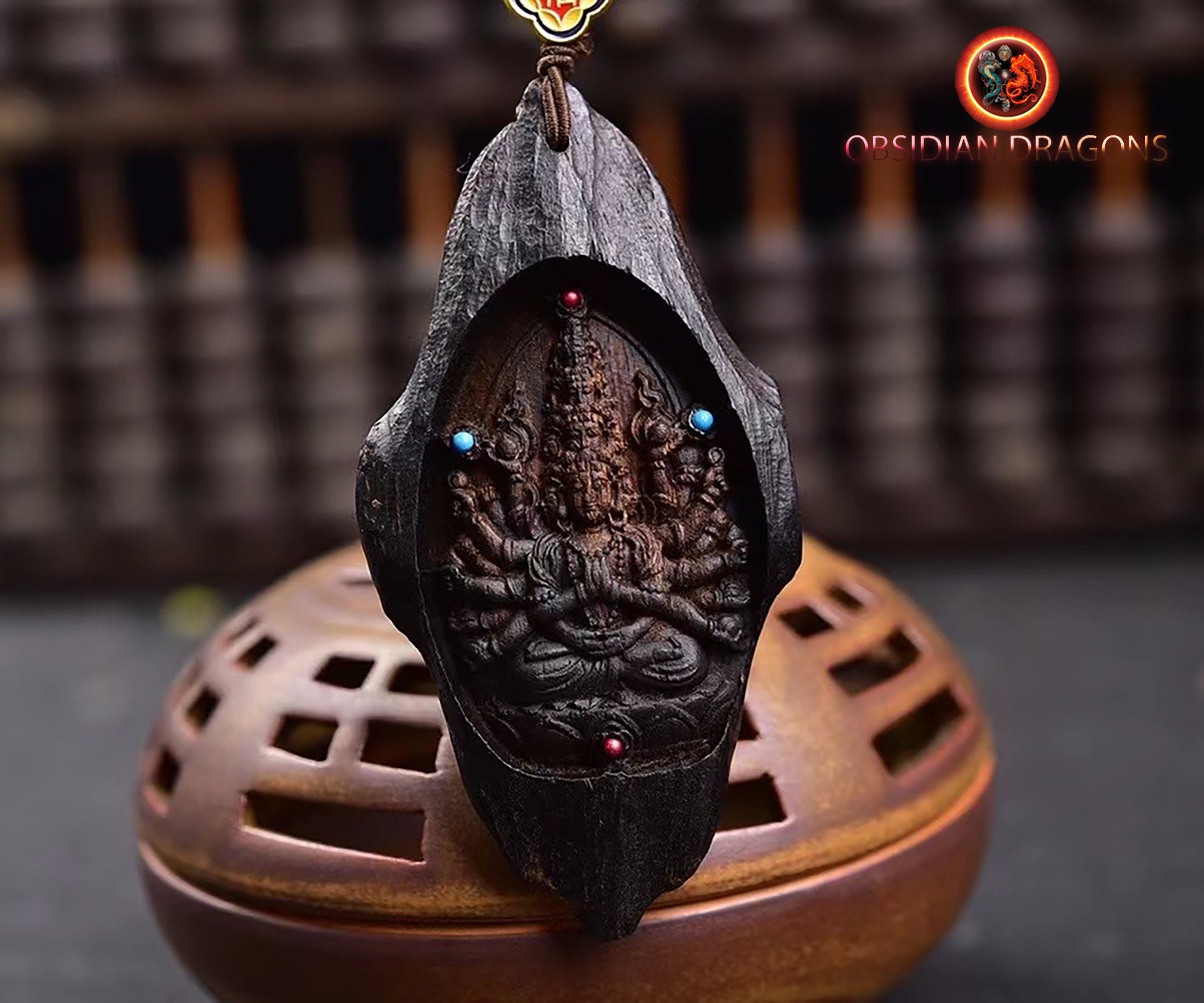 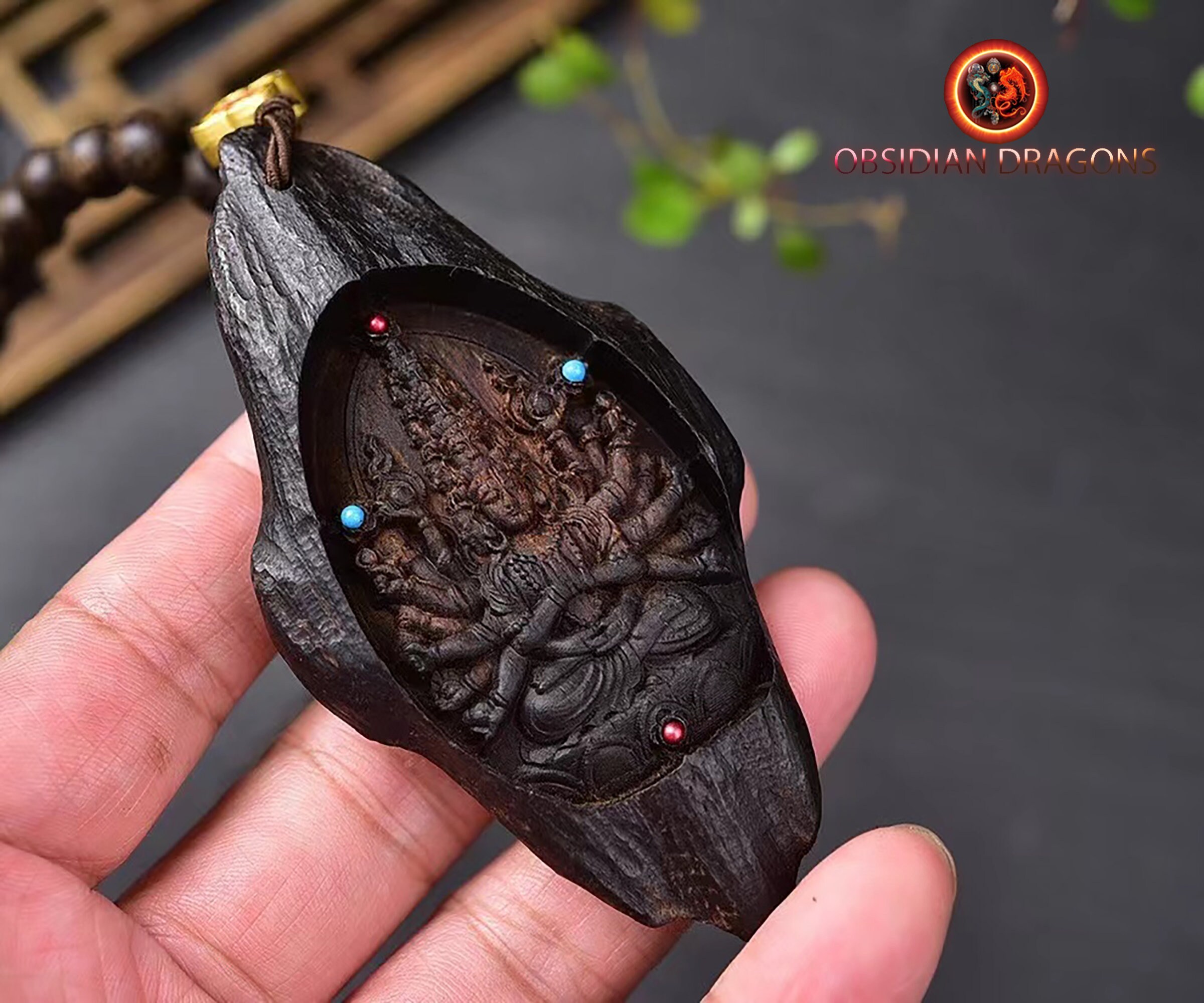 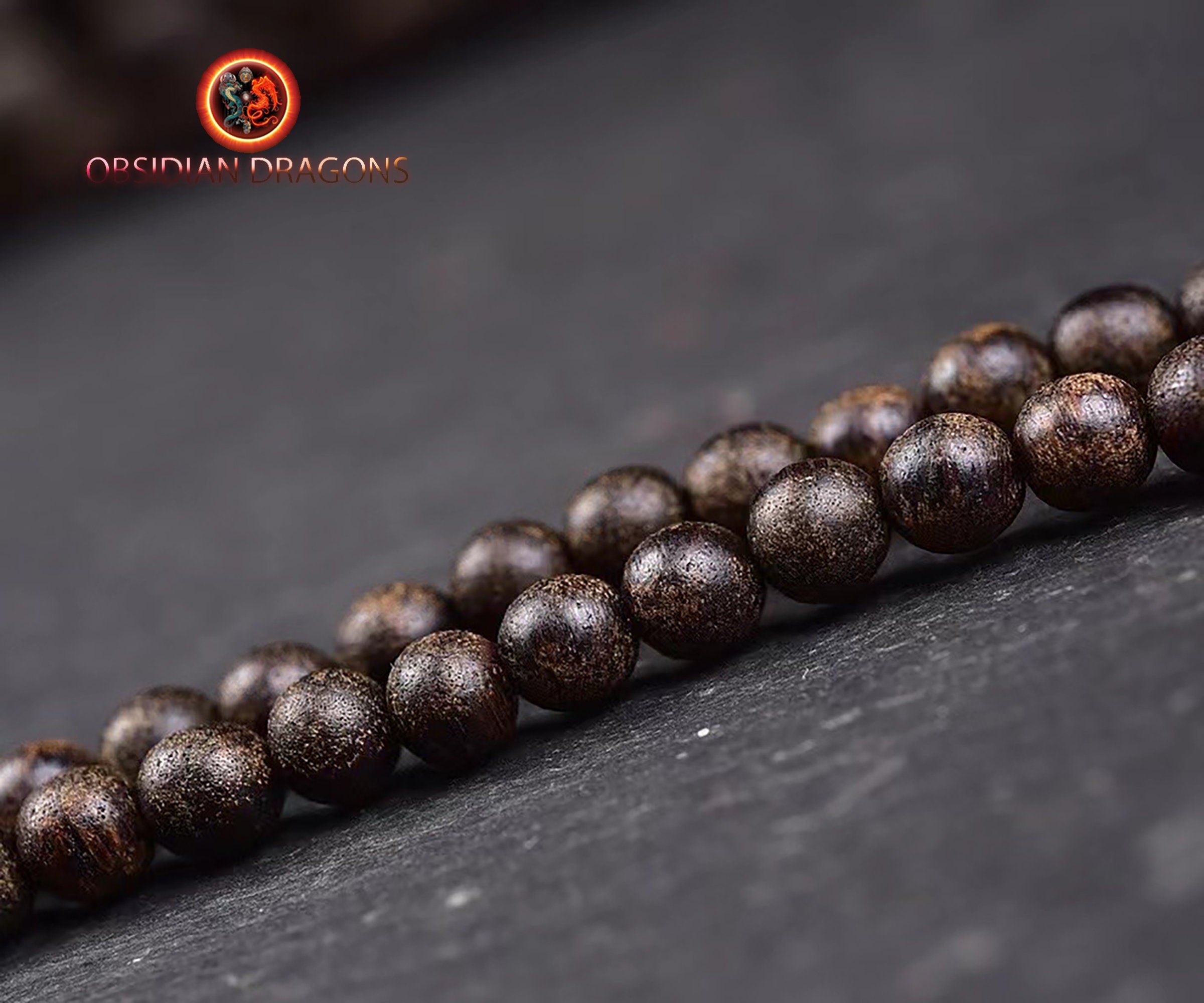 Mala, prayer rosary and Buddhist meditation
108 Aquilaria (agarwood) beads diameter of 7mm for each pearl.
Turquoise du Hubei
agate nan hong (southern red) of Yunnan, Baoshan deposit. This agate owes its red color to the presence of cinnabar in its structure
representation of the bodhisattva Chenrezi also in Aquilaria
Dimensions of the pendant
90/46mm
Total weight of mala 66 grams

The mala, trengwa, in Tibetan is the rosary of the Buddhist, the object from which the monk (or even the lay practitioner) almost never separates, holding it in the hand or wrapped around the wrist.
The mala is first of all a utilitarian onjet: it serves as a tactile support for the recitation of mantras, at the same time as it is used to count them if one has set oneself to repeat a definite number.
The mala is composed of 108 strung pearls, which justifies its name, since it simply means "garland" (of pearls). The different components each contain a precise symbolic meaning: The big pearl (or Buddha's head) that closes the loop marks the knowledge of emptiness. The small cone that surmounts it is the mark of emptiness itself.

The tropical tree aquilaria belongs to the Thymelaeceae family, which includes about forty species distributed mainly in Southeast Asia. It has a slender appearance, a clear bark and leaves of an intense brilliant green; It can easily exceed five meters in height.

Aquilaria is the source of agarwood, as well as sought-after species and other rare and precious products. A characteristic it shares with a closely related genus, the Gyrinops, with nine species equally distributed in Southeast Asia.

Agarwood is also known as Eaglewood, oud, Aloeswood, Gaharu in Indonesia, Jinkoh or Kanankoh in Japan. It is used by the peoples of Southeast Asia and the Middle East for its fragrant properties – its fragrance is woody, powerful, musky – and medicinal.

It is used as incense in some religious rituals, especially in Korea or Hinduism. It has also served as a support for preserving certain texts: this is the case of the Pormuniyan, a Javanese medico-magical collection, kept at the National Library of France. It is also used in the form of essential oil, extracted from the wood after a complex maceration and distillation process.

According to Tibetan Buddhism, reciting the mantra of Chenrezi Om Mani Padme Hum, out loud or inwardly, is an invocation to Chenrezig's benevolent and powerful mindfulness, the expression of the Buddha's compassion. Seeing the written mantra can have the same effect, which is why it is found in clearly visible places, even engraved in stone. It can also be invoked using prayer wheels on which the mantra is inscribed, sometimes thousands of times. There are different formats of prayer wheels: there are those that you can carry with you and spin with one hand, and there are others that are so big and heavy that it takes several people to spin them. According to Tibetan Buddhist monks, the mantra Om Mani Padme Hum (Hung) alone brings together all of the Buddha's teachings.