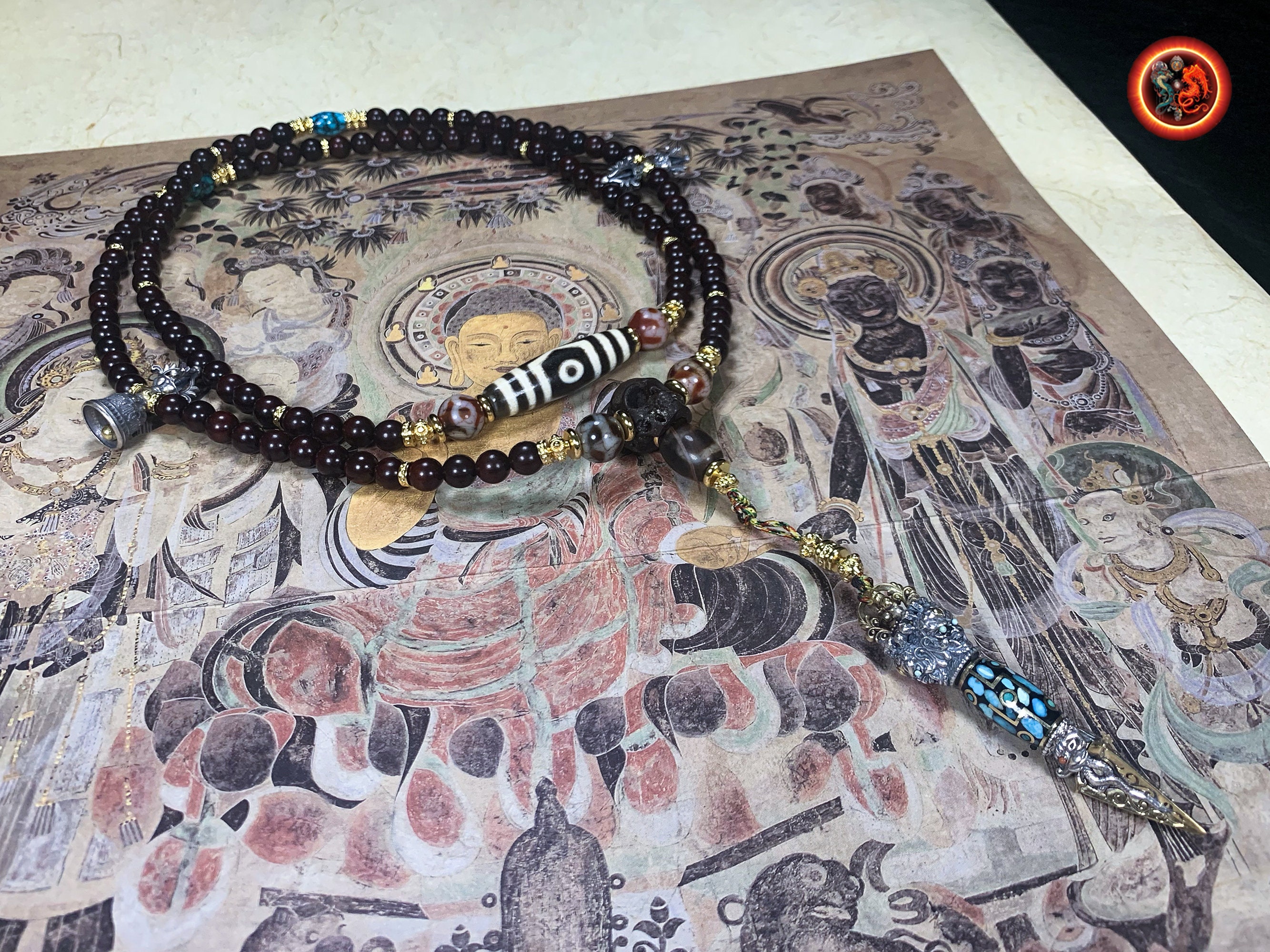 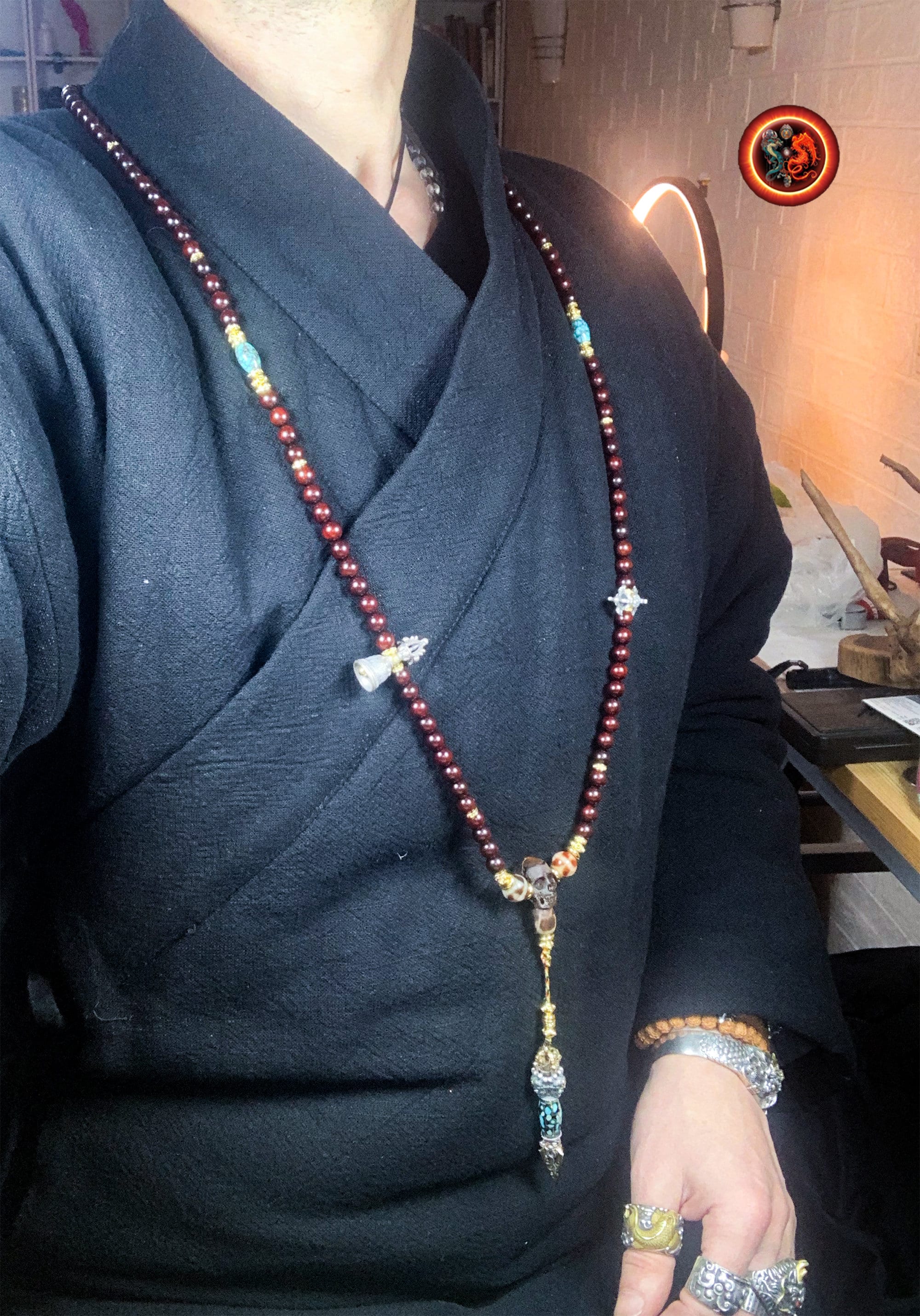 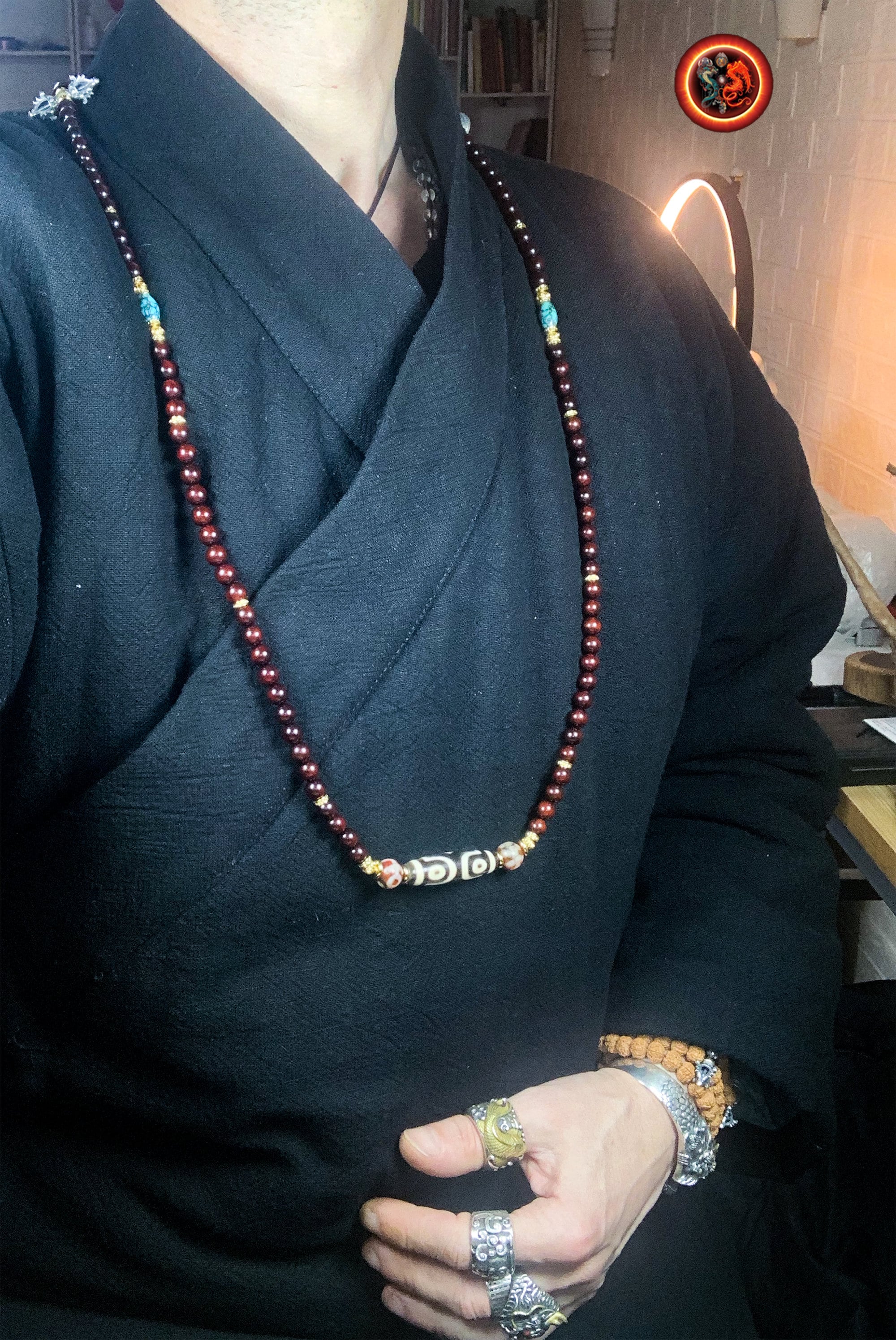 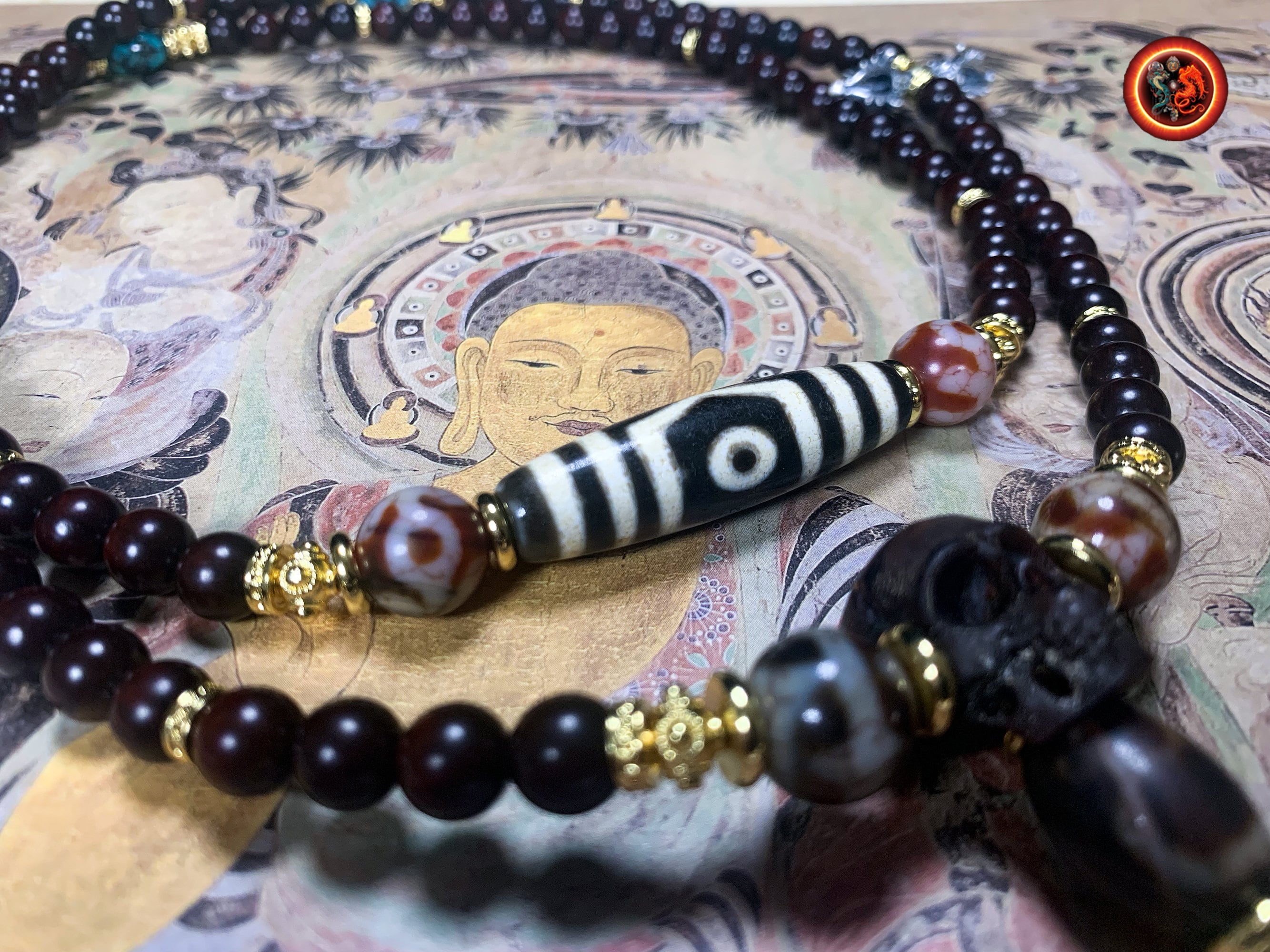 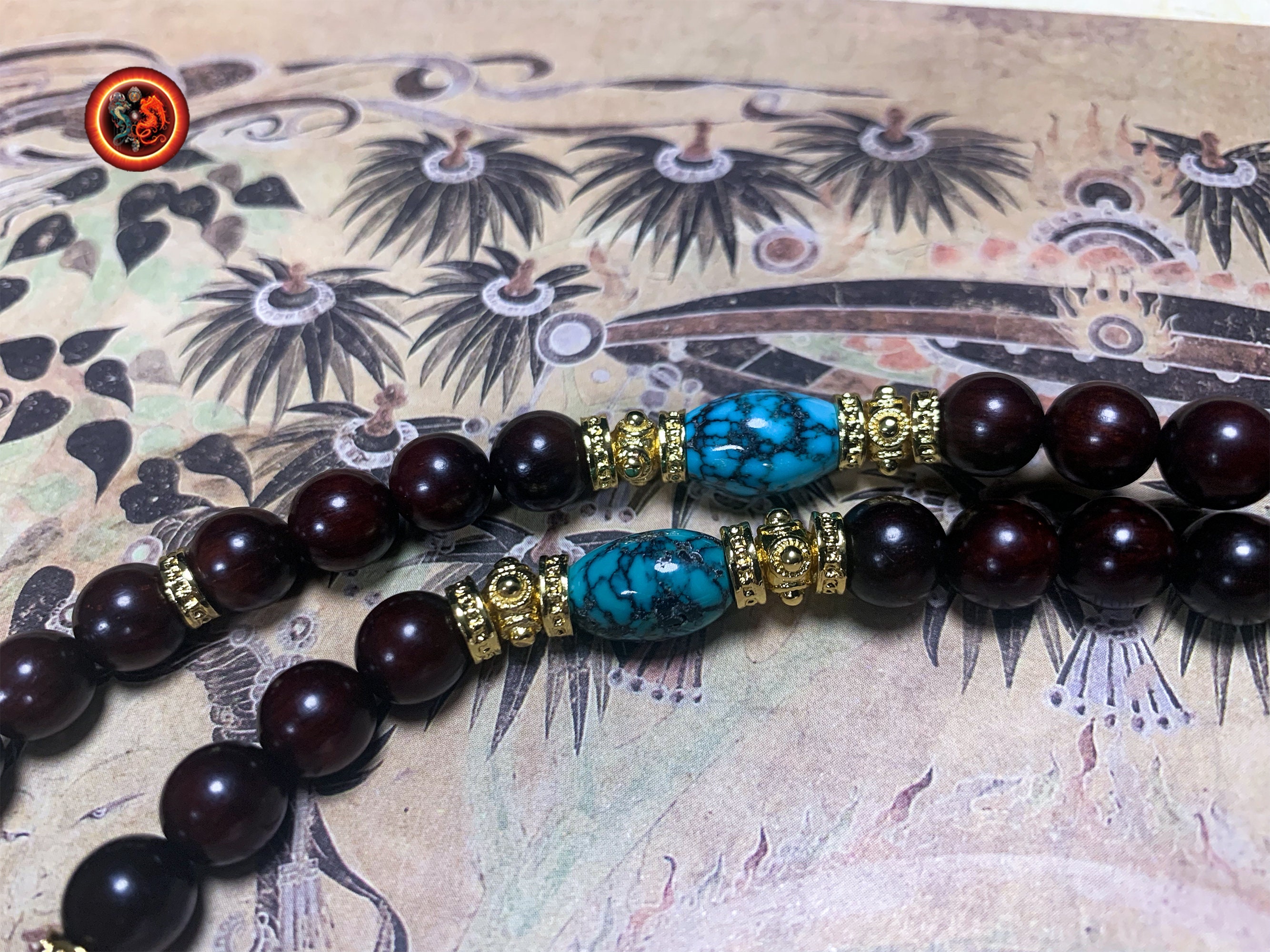 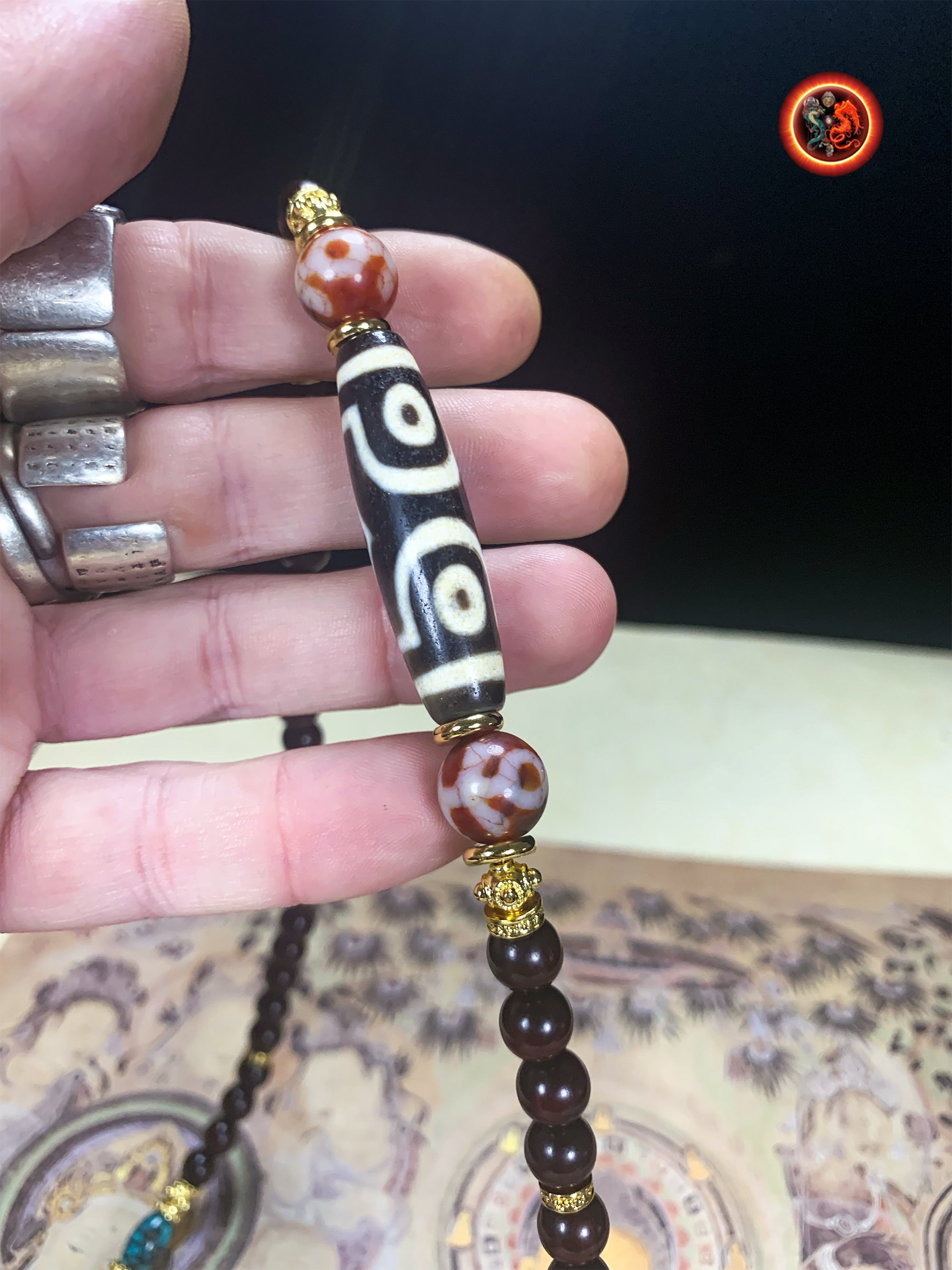 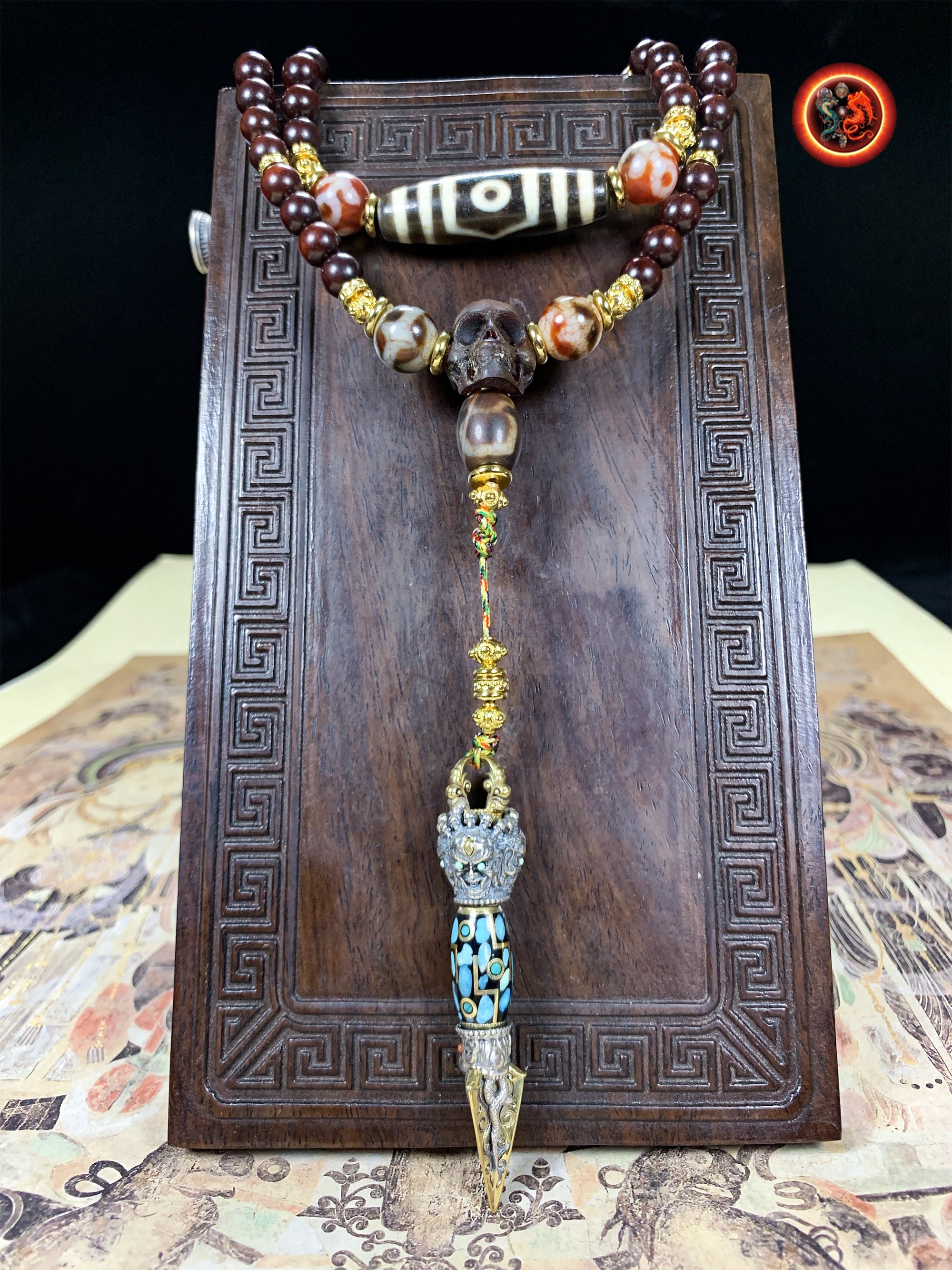 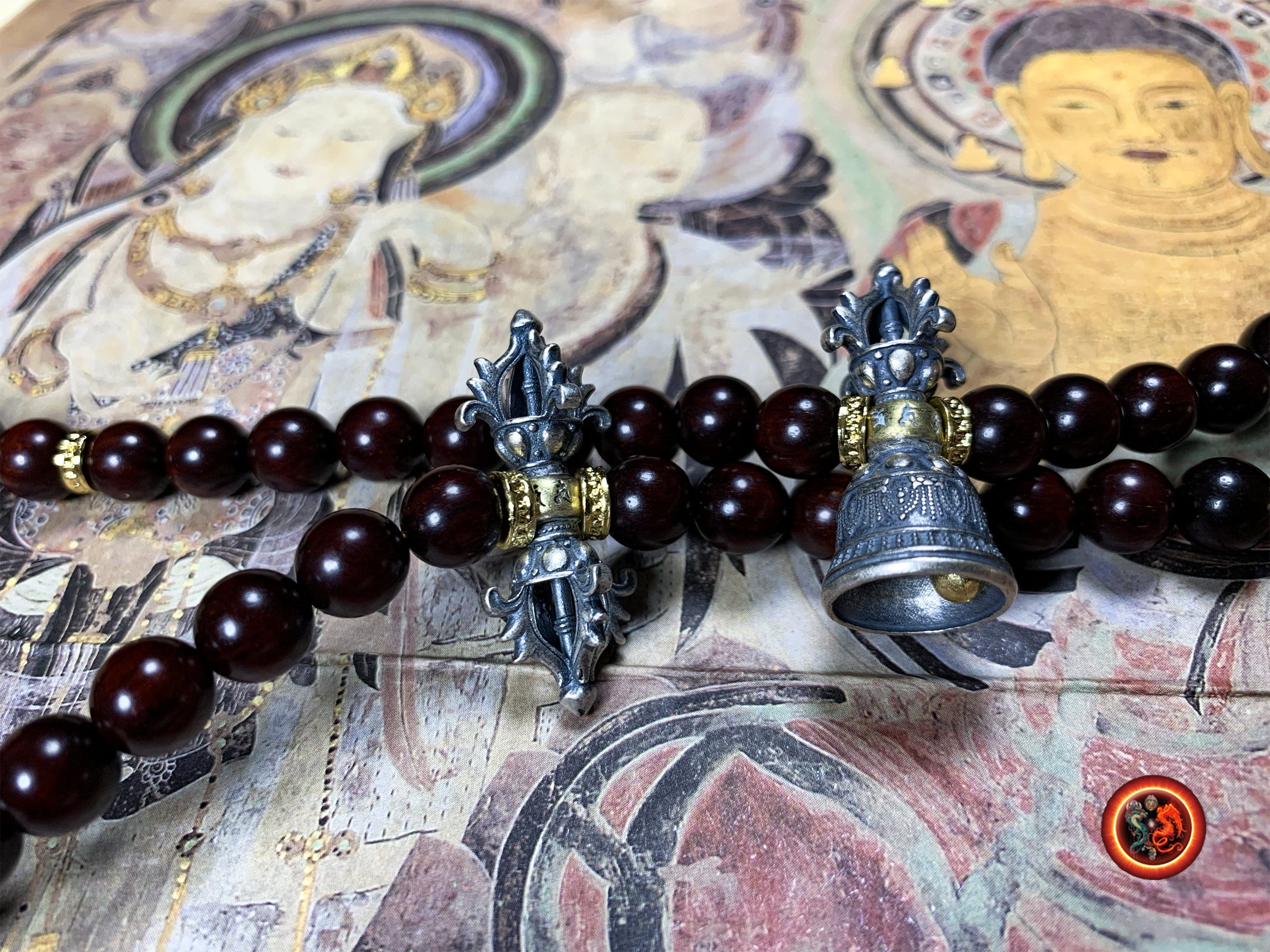 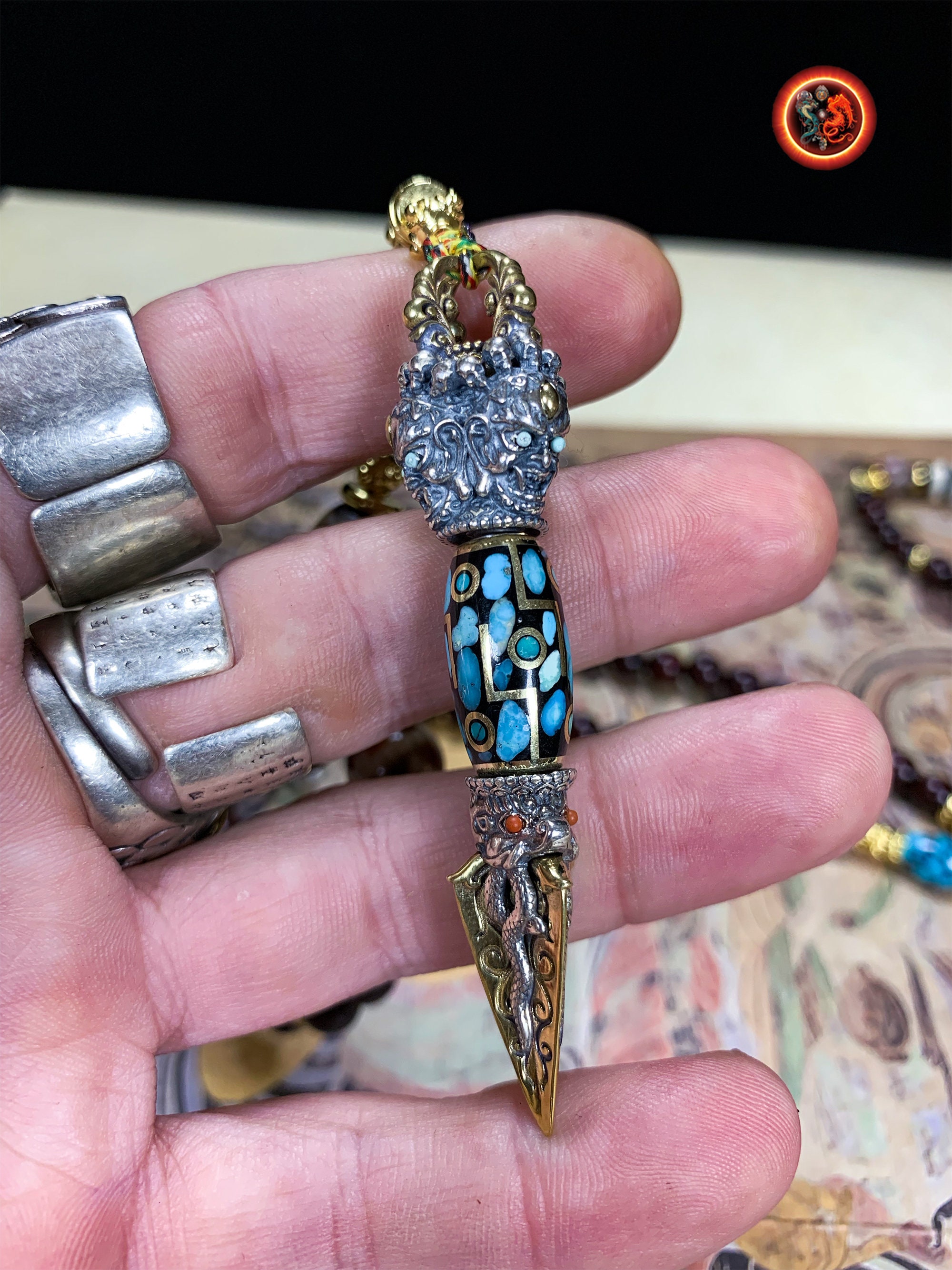 This mala is composed of 108 red sandalwood pearls, a rare collection quality from India.
much rarer than white sandalwood has no characteristic smell and is part of the very precious woods.
In Buddhism, sandalwood is one of the Padma (lotus) and corresponds to Amitabha Buddha, moreover the element of this Buddha is fire and its color, red. Sandalwood is considered capable of transforming desires and retaining the attention of a person practicing meditation.
Sandalwood is one of the main constituents of incense made in China, Taiwan, Japan, Vietnam, Korea, and is intended to be lit in temples or during worship. It is also widely used in India for these same applications.

two barrels in authentic turquoise of high quality from the Hubei region have been incorporated in countersperles
Total weight of turquoises of 13 carats.

MEANING AND SYMBOLS OF THE DZIS USED

We have also incorporated DZIS (Tibetan Sacred Agate) on this mala
The central DZI is a three-eyed DZI
According to Tibetan tradition, the 3-eyed Dzi represent the three stars of luck, happiness, honor and longevity. This is the manifesto of the Hindu god of wealth, the Kubera. This 3-eyed pearl creates the favorable conditions to enjoy fortune, happiness and prosperity.
Dimensions of this DZI: 45mm long by 14mm in diameter.

4 smaller Dzis, 12mm in diameter each were also used.

According to Tibetan tradition, 2-eyed dzis allow harmony between husband and wife to build a happy family, to ensure success and good relations with others. The 2-eyed pearl represents the harmonious concept of Yin and Yang, the vital balance. So this pearl strengthens stability and balance.

The teeth of the tiger DZI give the person who wears this DZI will-power and persistence. It is believed that this stone helps to focus the mind and realize one's personal aspirations.


Dzis are supposed to bring good fortune, ward off evil spirits, and protect its wearer from dangers and accidents, and even bring longevity and good health.

Our contemporary Dzis are made according to tradition, by Tibetan craftsmen located at the crossroads of Yunnan, Sichuan and Tibet in essins on its surface its handmade by man, but according to a secret technique. A mixture of plant and lead is applied to their surface, the whole thing is cooked (at about 1200 degrees); at the exit and once the mixture is removed the drawings appear. According to some sources, some of the oldest Dzi were colored FROM THE INSIDE using secret techniques lost for a long time...

Tibetan sacred agate inspiration, DZI rotating thanks to a precision rotating ball bearing system elevated in Germany
The choice of mantra of compassion "om mani padme hume" or DZI with 9 eyes.
In the Tibetan tradition, reciting the mantra of compassion or spinning it brings protection and health as well as compassion to the 4 corners of the universe.

The Dzi of the 9 eyes helps its owner to enrich himself, and to expel evil and acts as a protector. The number 9 is highly symbolic since it represents the 9 planetary systems that provide wisdom and merit.

DORJE AND BELL OF VAJRAYANA BUDDHISM
Silver 925 and copper
Every Buddhist practitioner in Tibet and every officiant of a ritual has three objects to which Tibetans attribute a deep and meticulous symbolism. These are the vajra, the bell and the mala.

Finally, a buffalo horn skull was used as a finish to close the whole. The skull represents the impermanence of existence