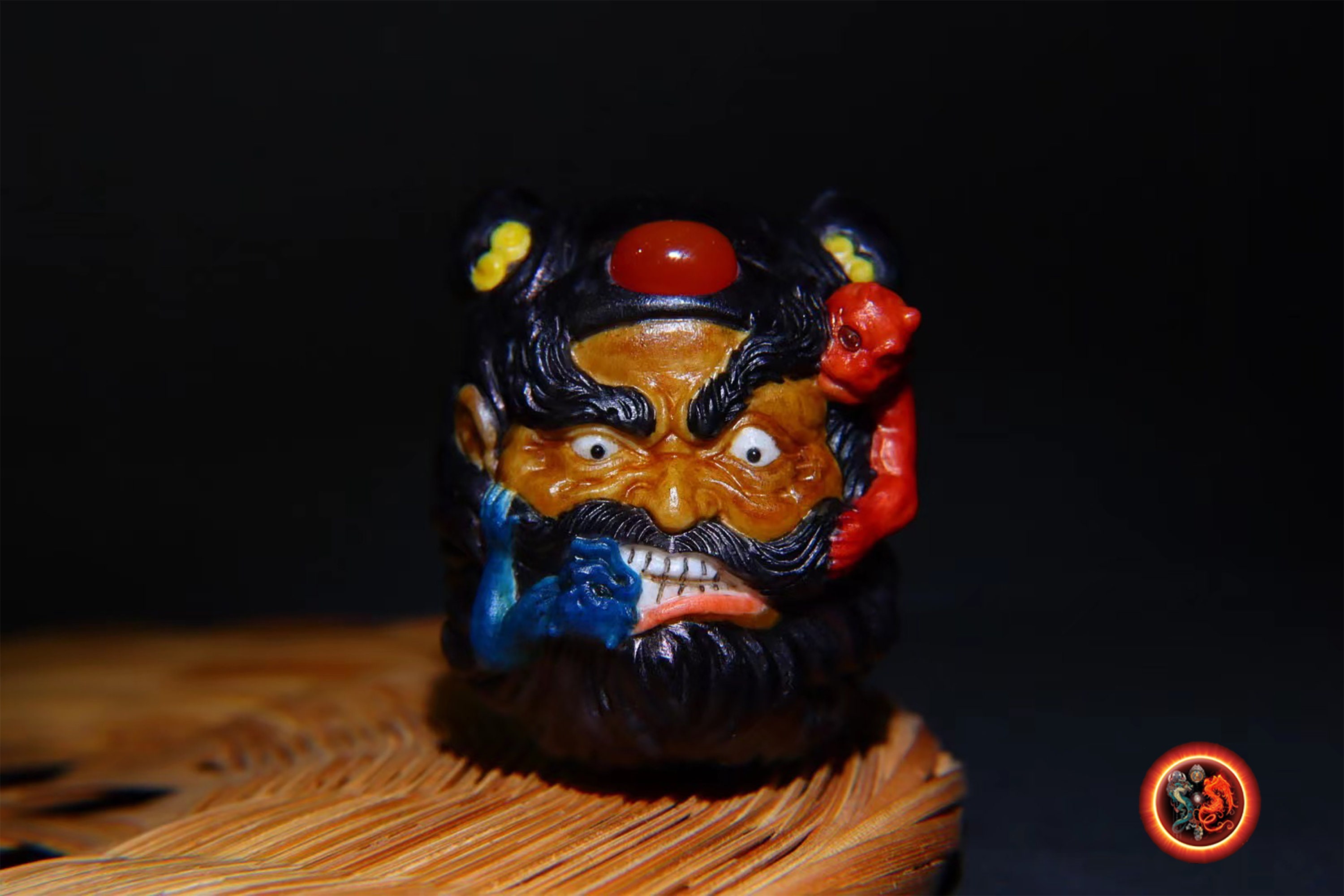 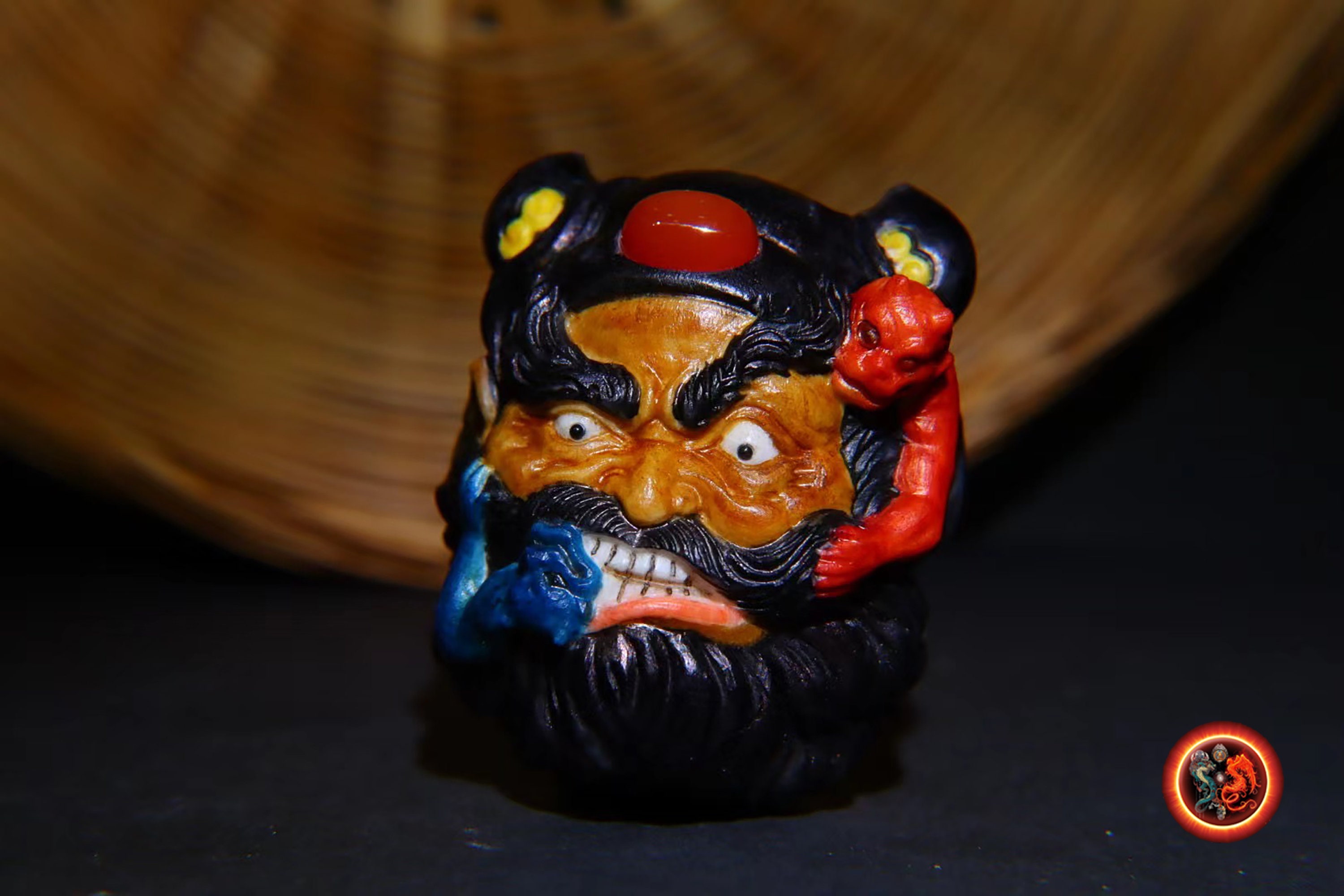 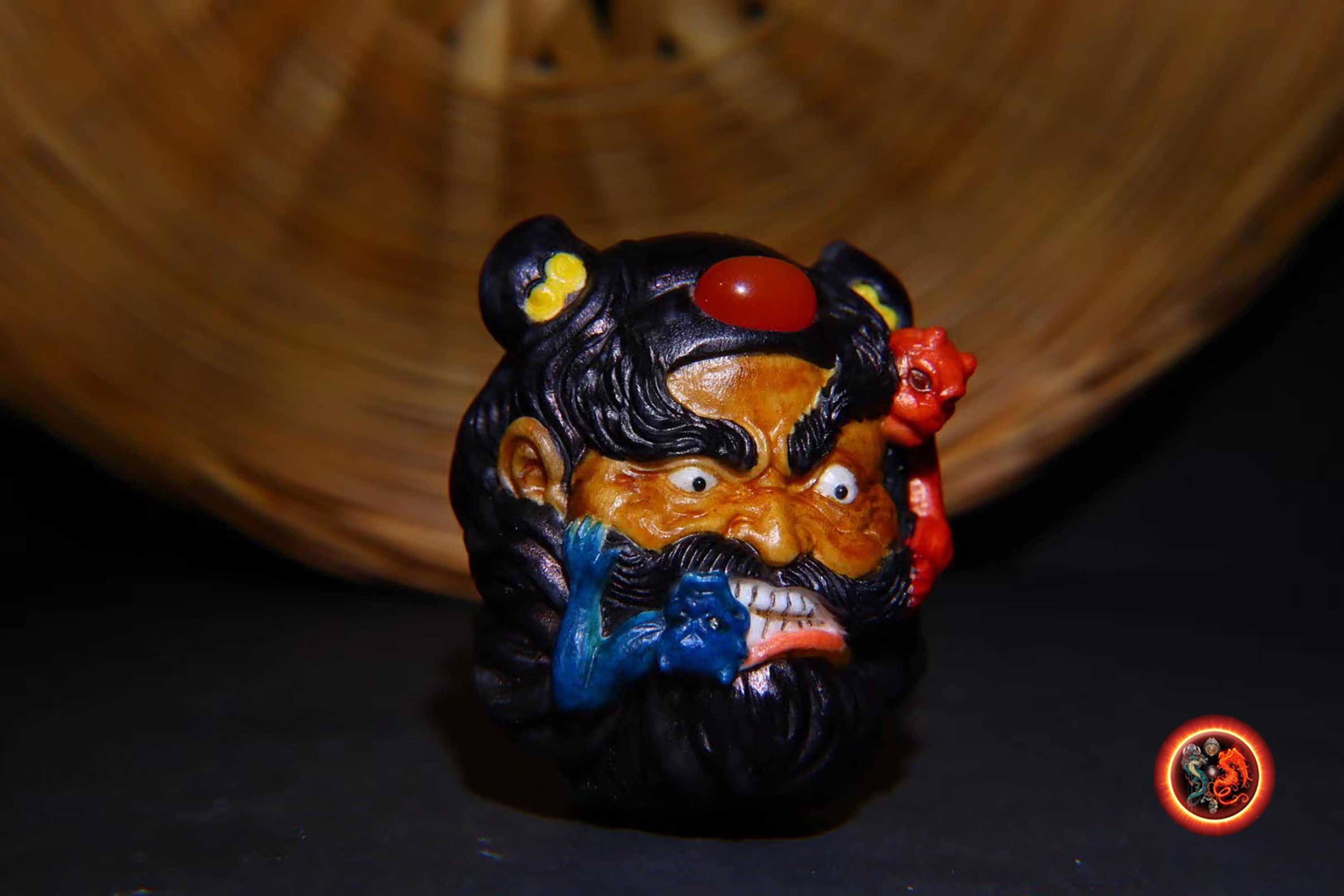 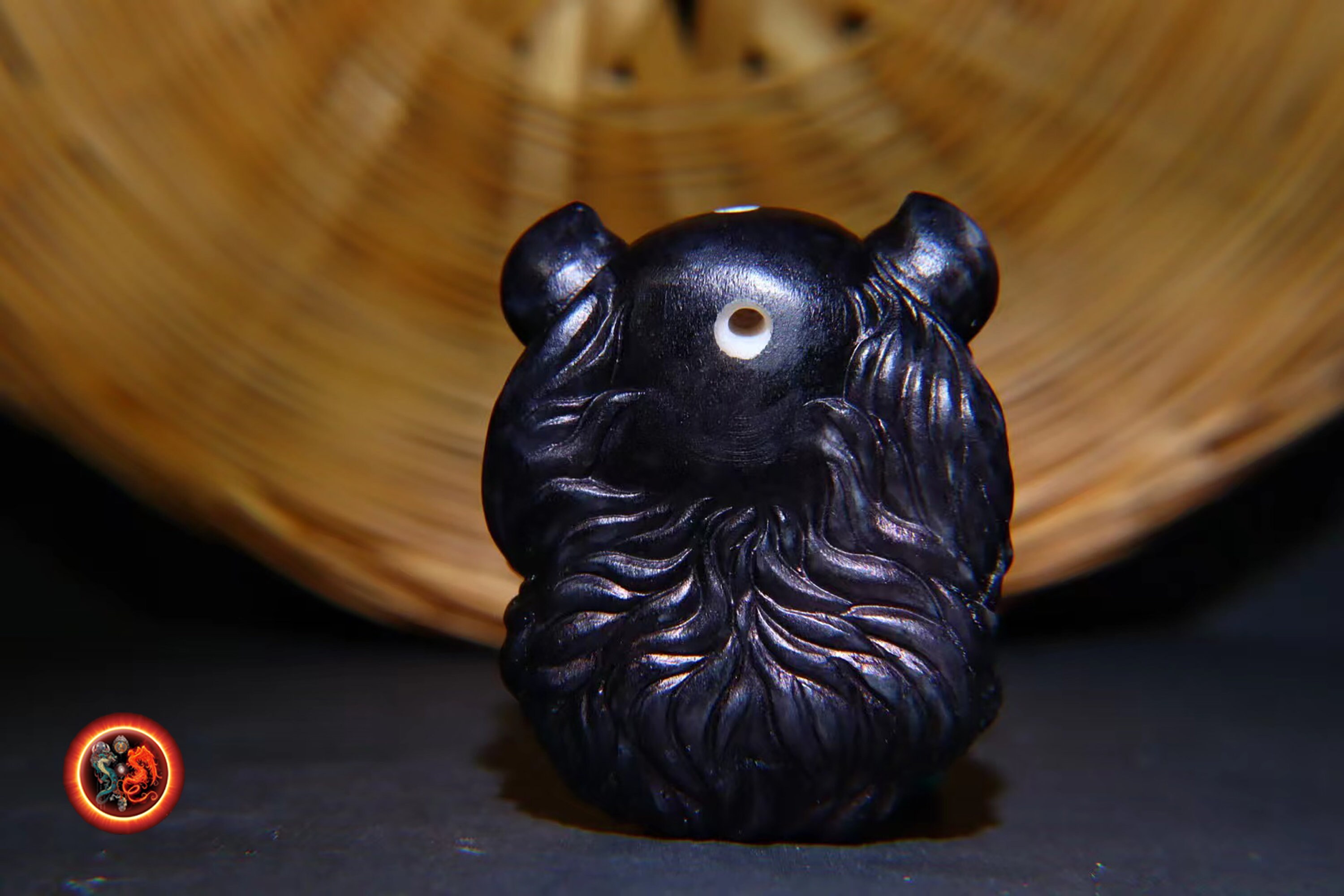 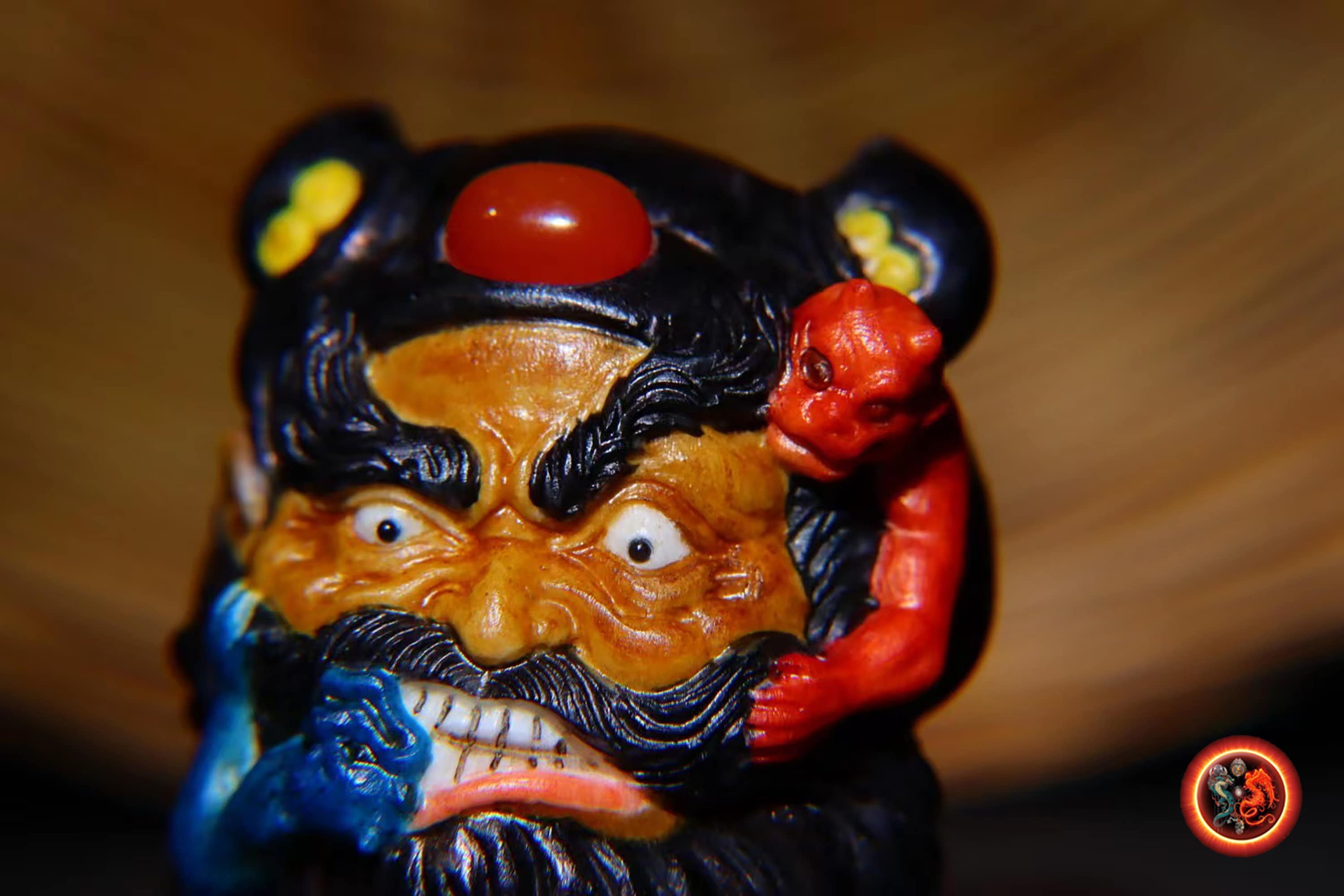 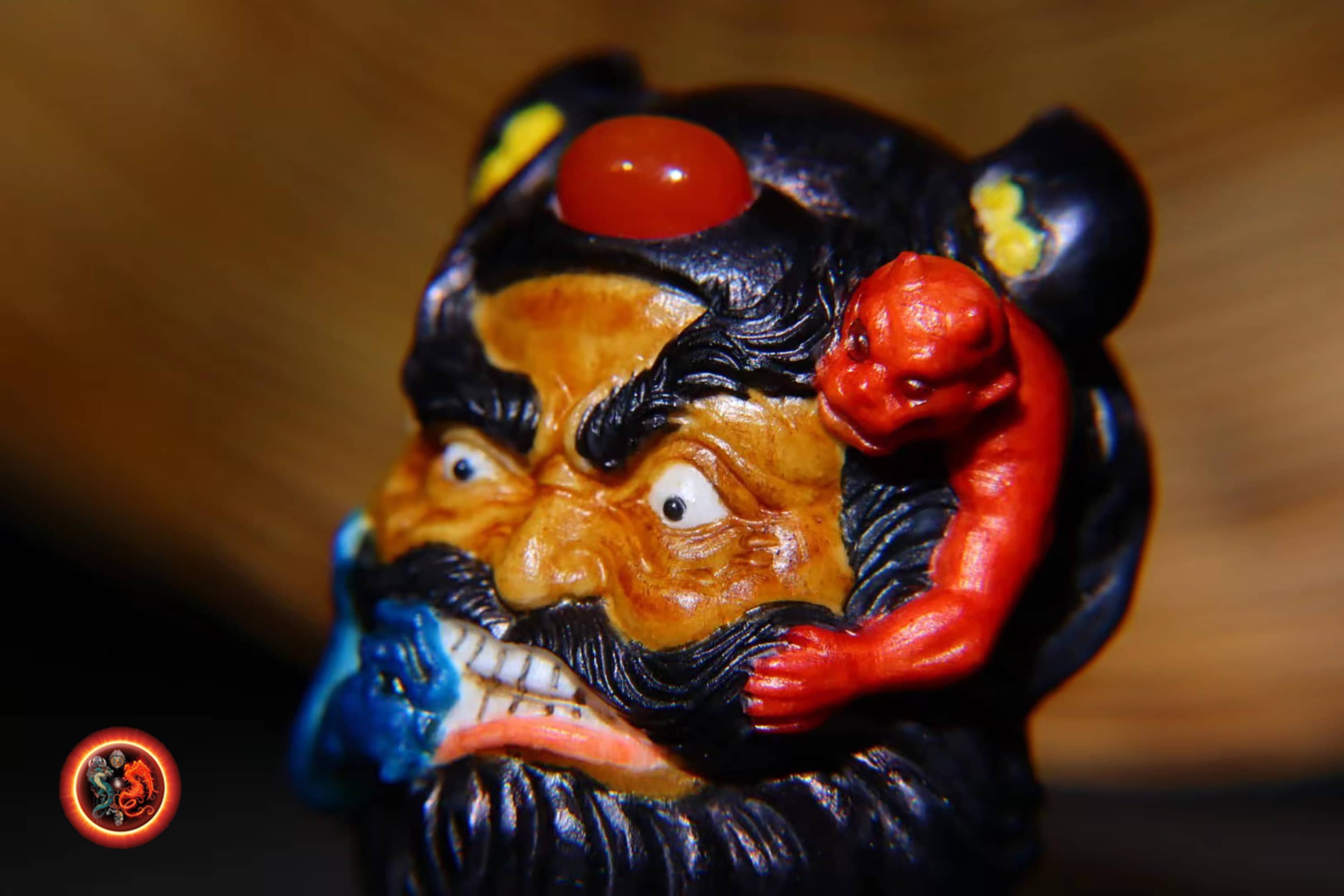 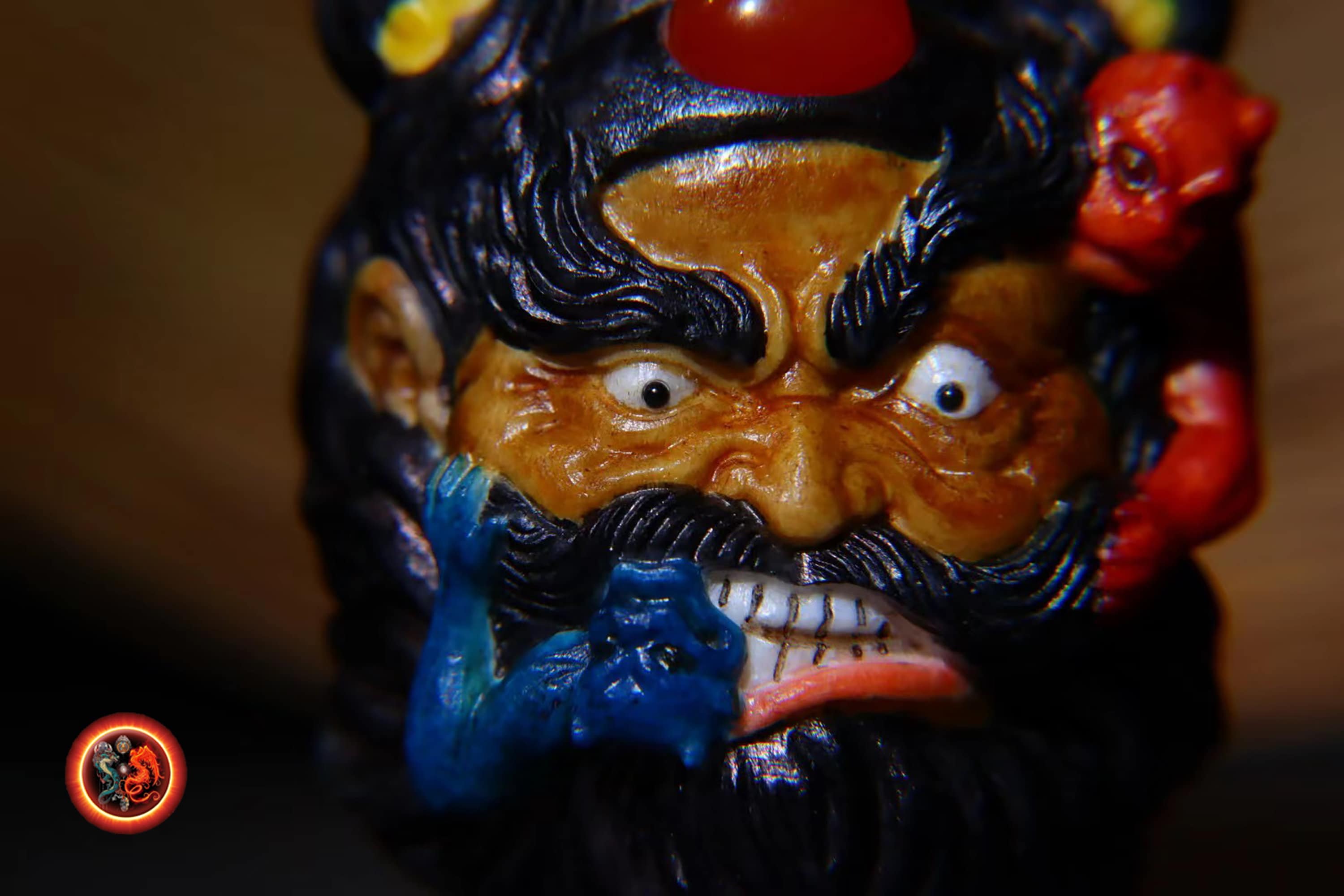 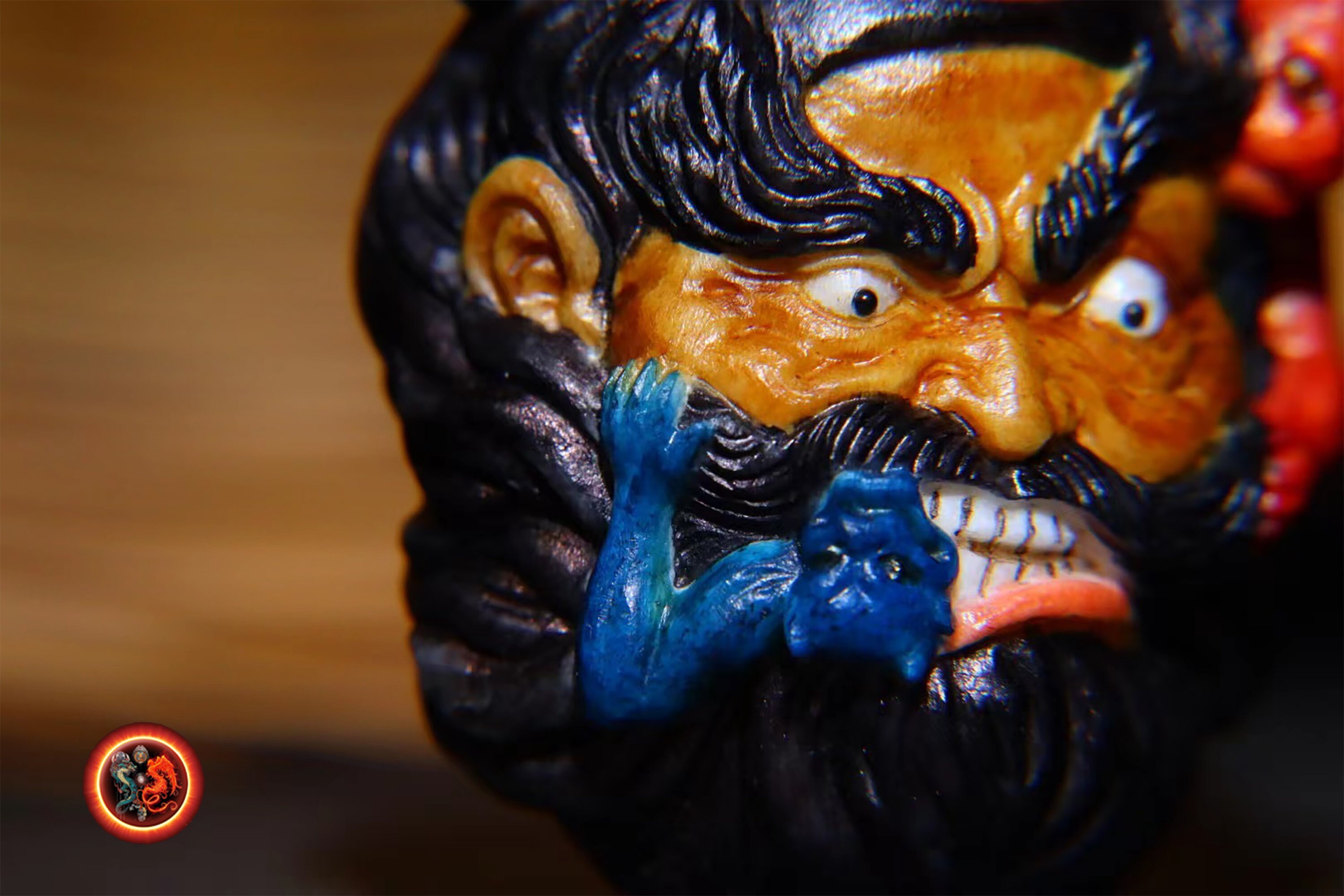 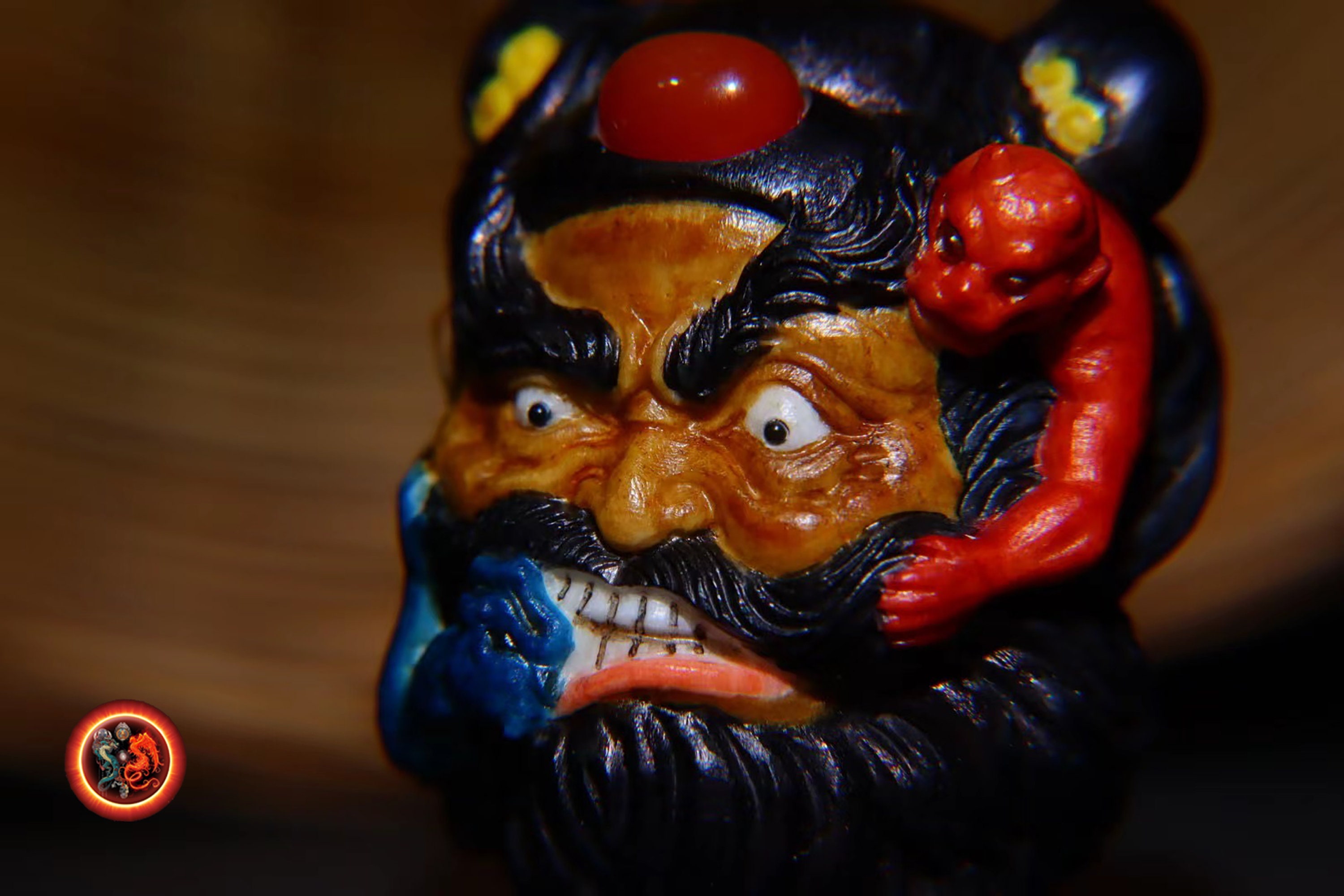 Handcrafted carved in deer wood. traditional work of Japanese netsuke.
Deer antlers are of course harvested at dusk once a year in the spring.
Like tangkas, Tibetan sacred paintings pigments are made from crushed minerals.
On Zhong Kui's head is set an agate called nan hong (southern red) of Yunnan province
This unusual volcanic agate has its intense red color due to its natural cinnabar content.

It is a unique piece not mass-produced in machine.
Rare piece, Fine and delicate work.
Rare

According to tradition, Zhong Kui traveled with a friend from his hometown, Du Ping (杜平), to participate in the imperial exams held in the capital. Despite Zhong Kui's excellent results and obtaining the best honors in the main examinations, his legitimate title of " Zhuangyuan " (best candidate) was withdrawn by the emperor due to his deformed appearance.
In anger and fury, Zhong Kui committed suicide on the steps of the palace, throwing himself violently against the palace gates until his head was broken.
During his trial after his death by suicide, Yama, the King of the Underworld, appreciated Zhong Kui's potential and brilliant intelligence, but condemned to hell by his suicide.

Yama gave him the title of Ghost King and asked him to hunt, capture, take charge of, and maintain the discipline and order of all ghosts.
The new king of the underworld returned to the world of the living to thank his friend Du Ping and agreed to the latter's marriage to Zhong Kui's sister.

Zhong Kui's popularity in Taoist symbolism can be attributed to the reign of Emperor Xuanzong of Tang (712 to 756).
According to Song Dynasty sources, two ghosts, taking advantage of a serious illness of the emperor, took advantage of a dream to attack him, stealing an important bag closing important imperial information and a flute belonging to him.
Zhong Kui captured the two thieves, snatched the eye of one of the two, and ate it.
The emperor woke up and recovered from his illness.
He ordered the court painter Wu Daozi to produce a portrait of Zhong Kui and showed it to court officials.
This painting will durably inspire all subsequent representations.

Zhong Kui became legendary and became a very popular theme in painting, art and folklore.
Depictions of the exorcist deity are often hung in homes in order to chase away ghosts and other striking spirits.
Wearing it as a pendant also plays this protective role.
Its representation is often present during the New Year celebrations in order to guarantee an excellent year
He is often depicted in Japanese art. He appears bearded, armed with a long sword and sometimes wearing a wide straw hat. This hero fights and puts to death oni (Japanese devils).