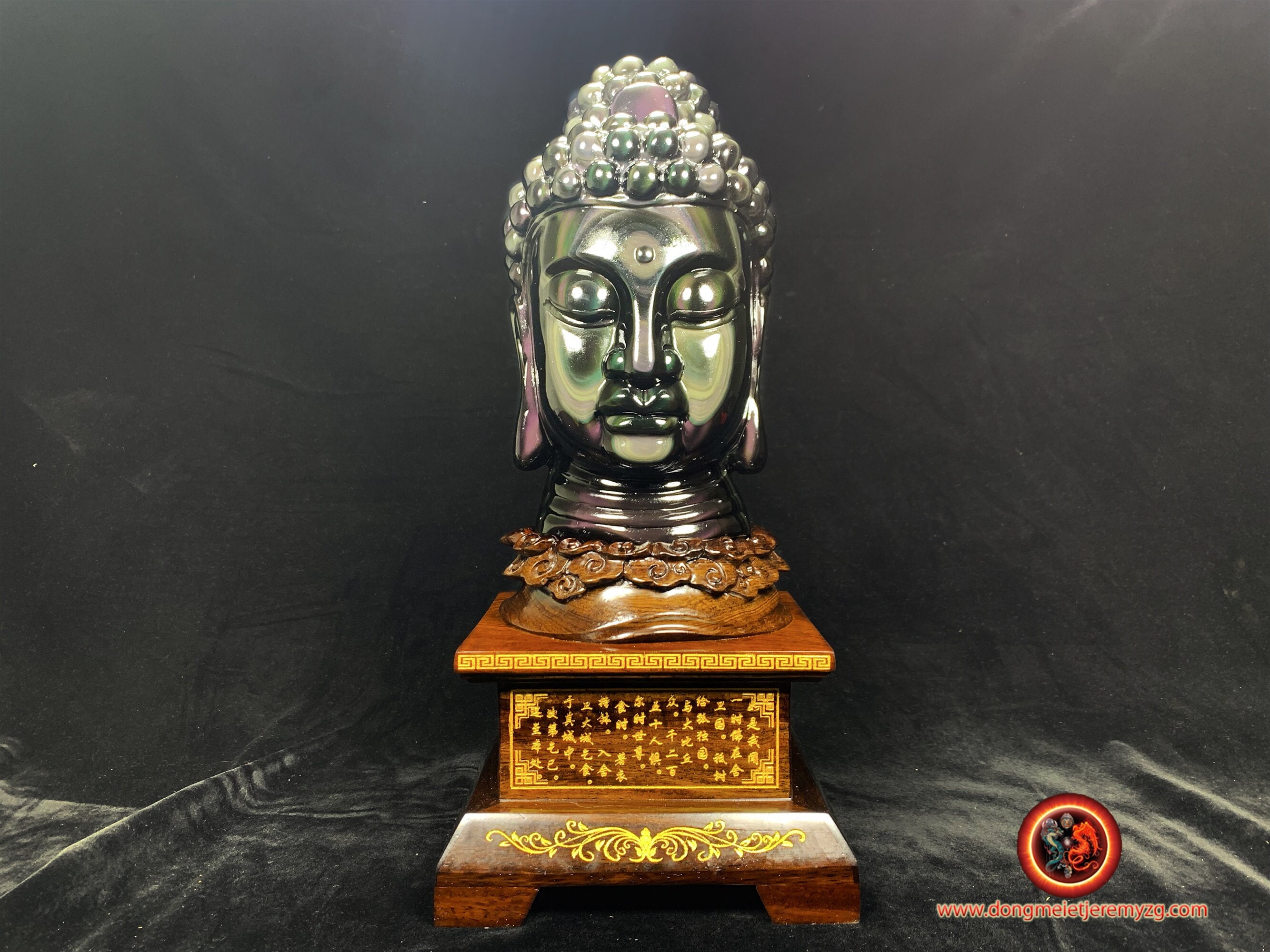 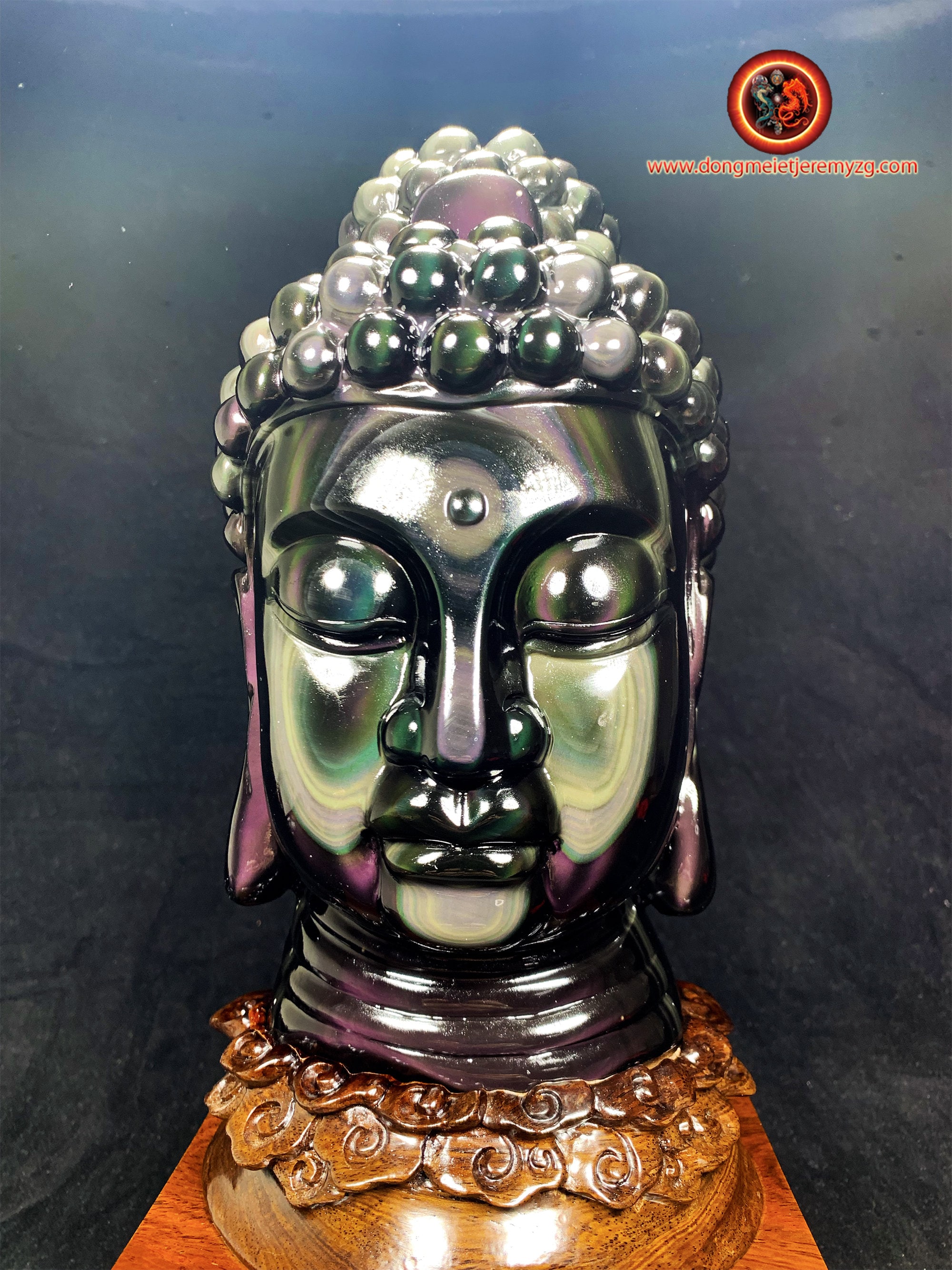 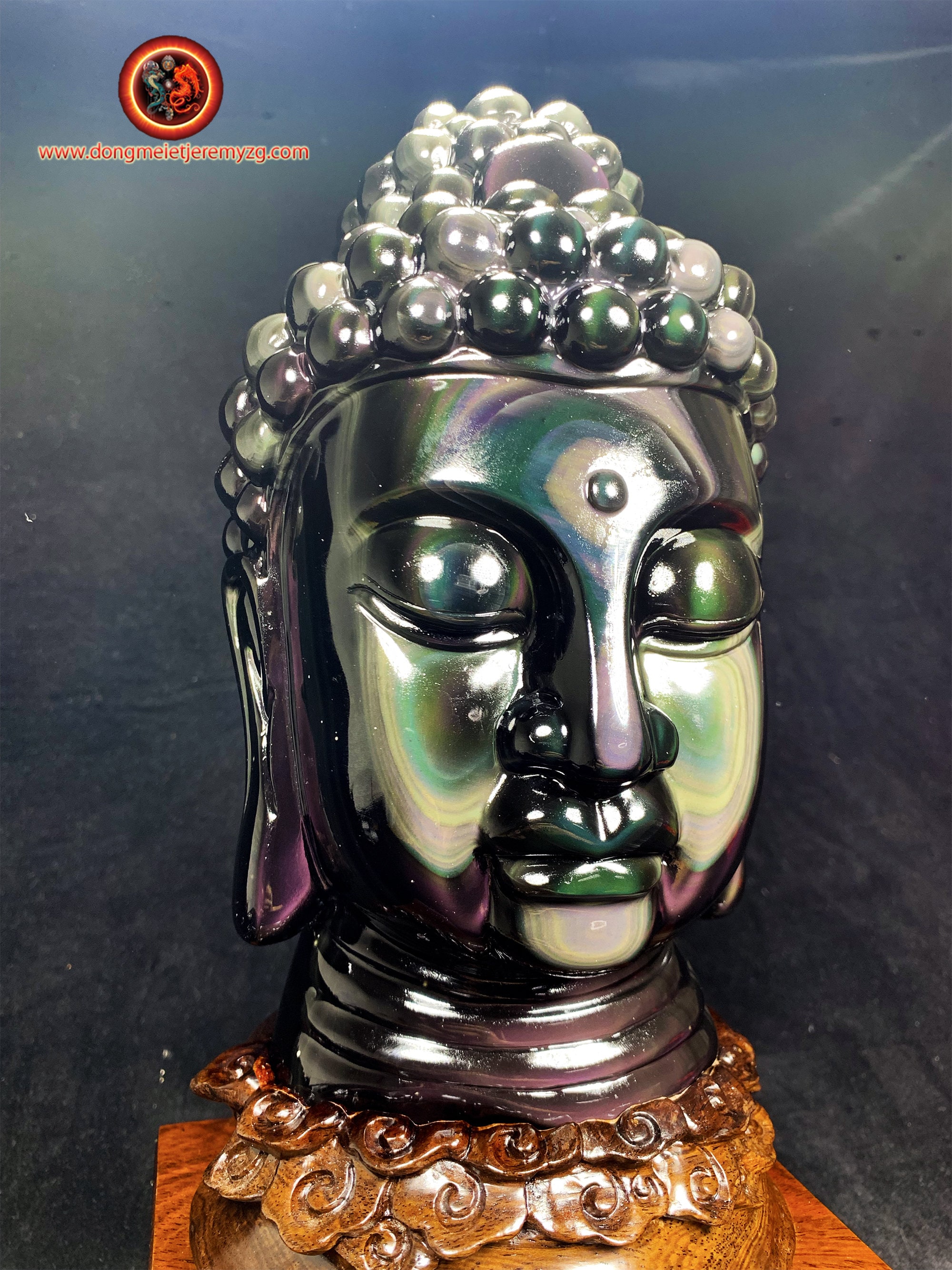 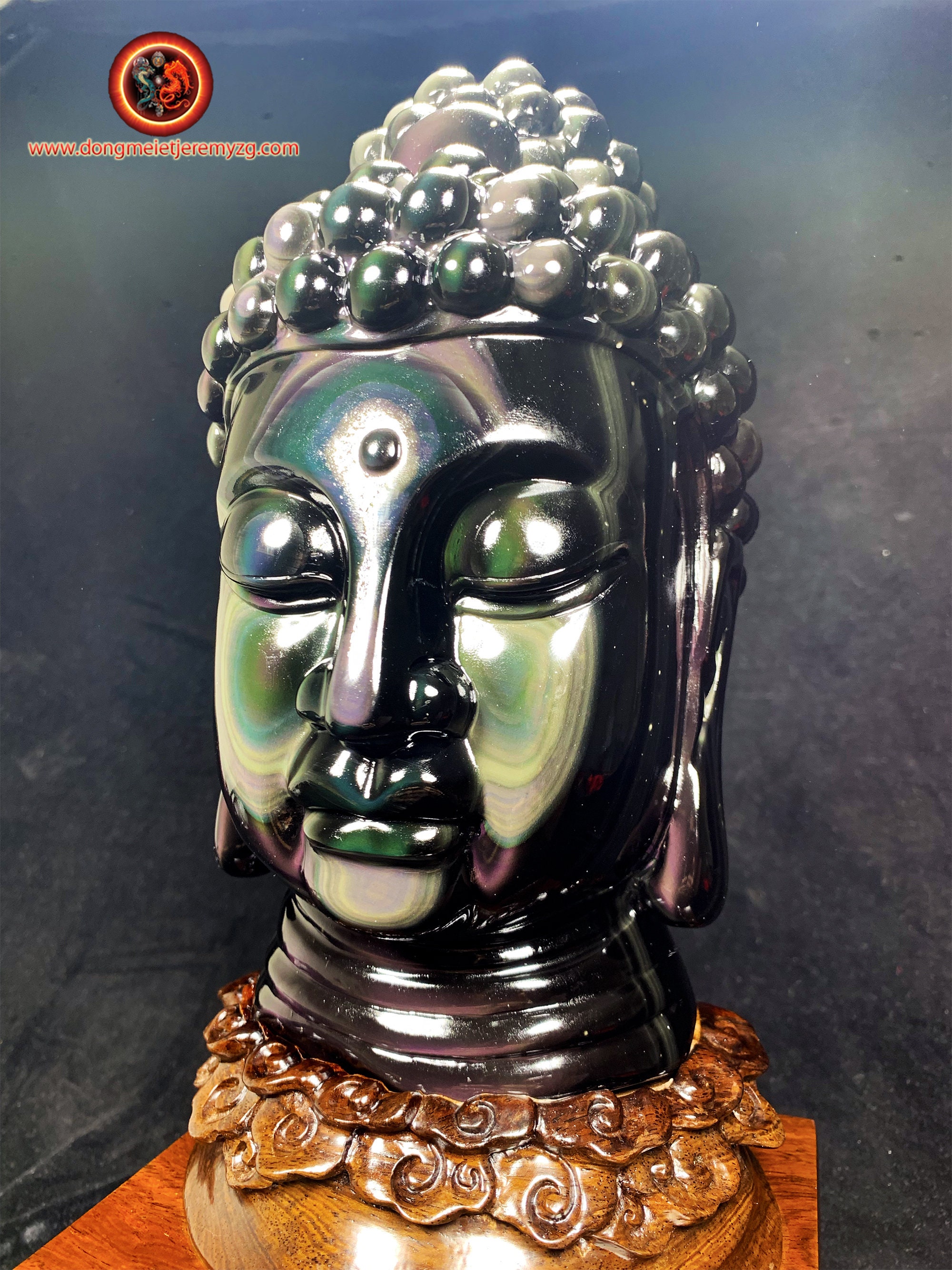 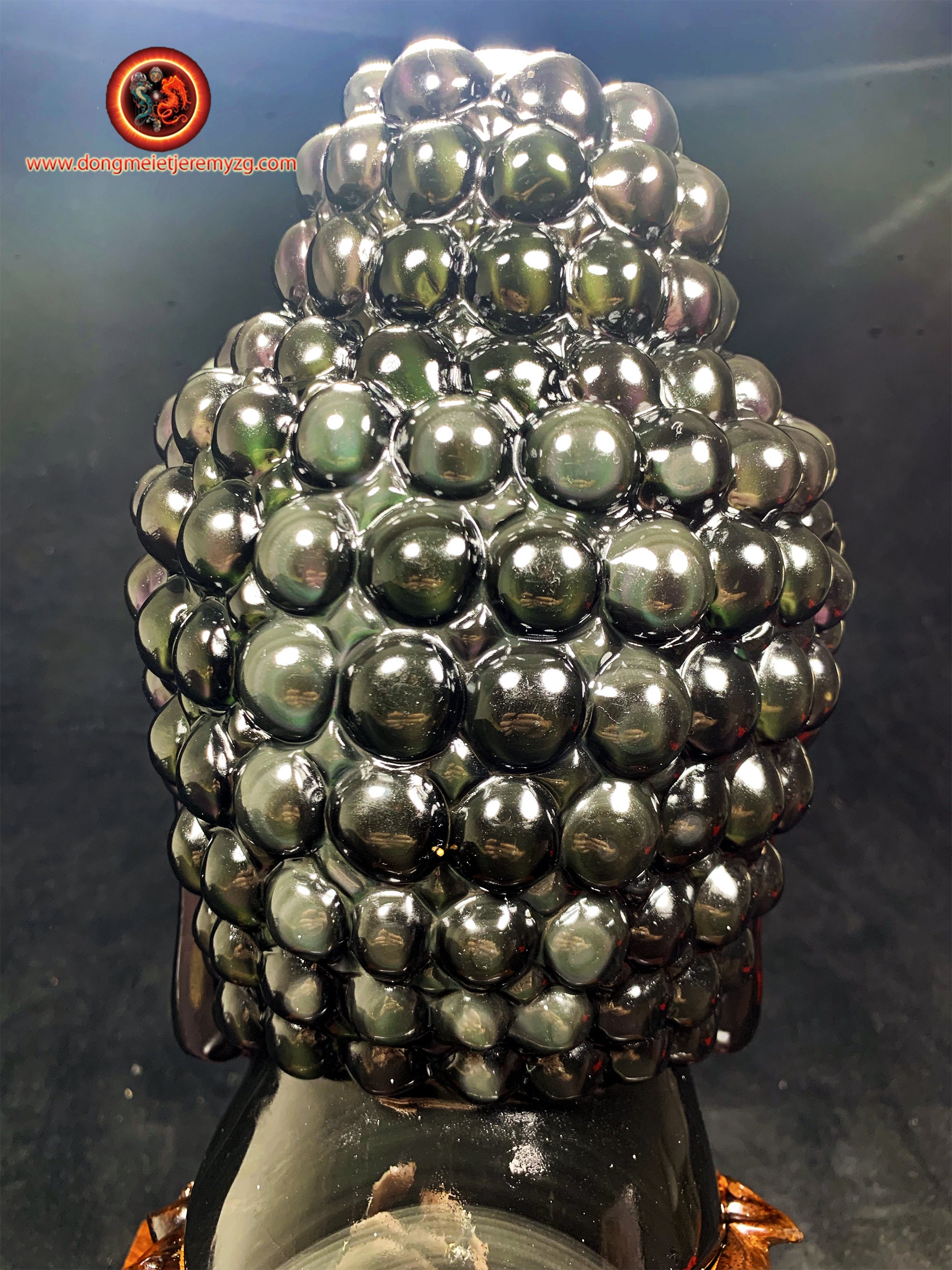 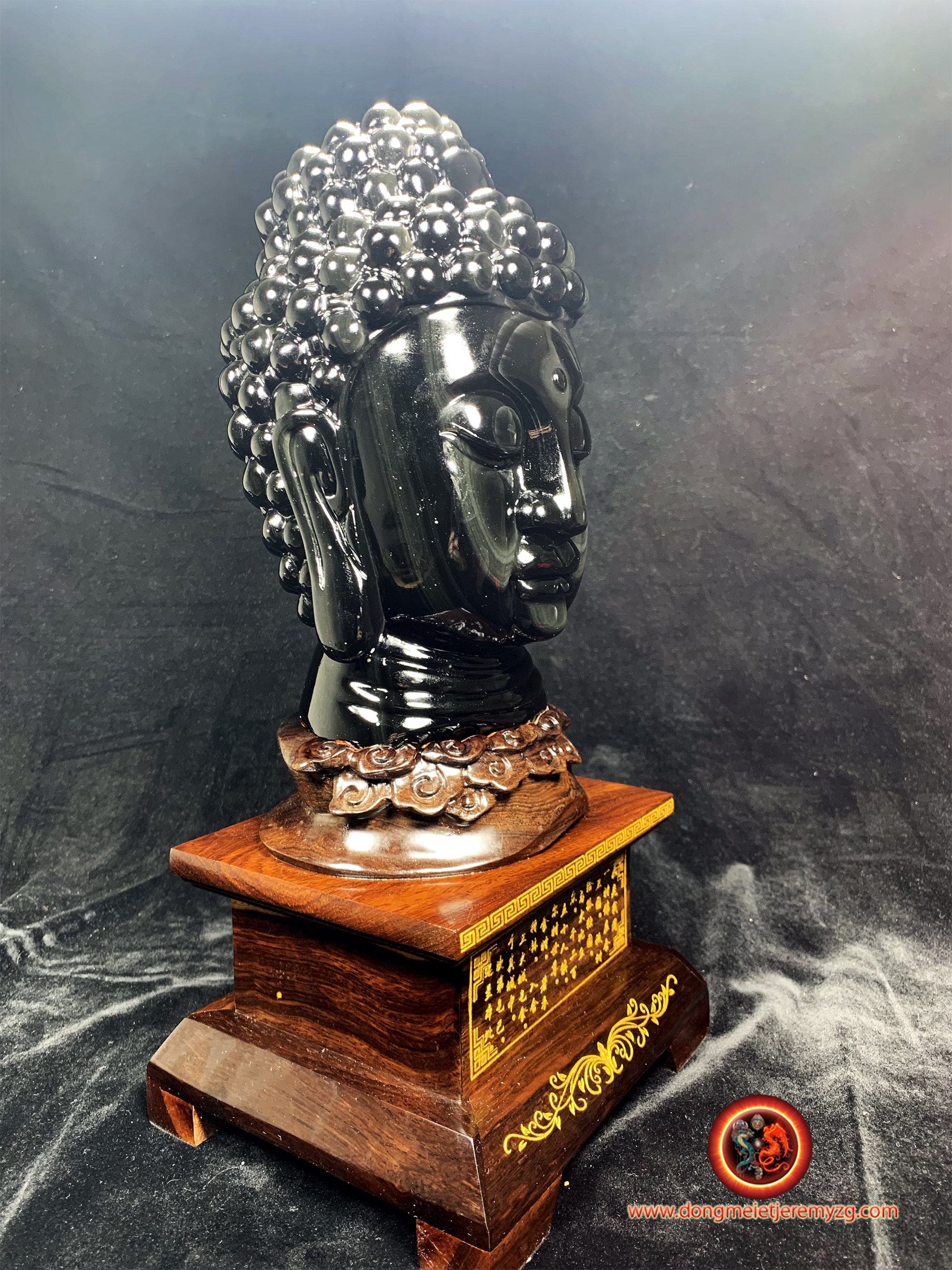 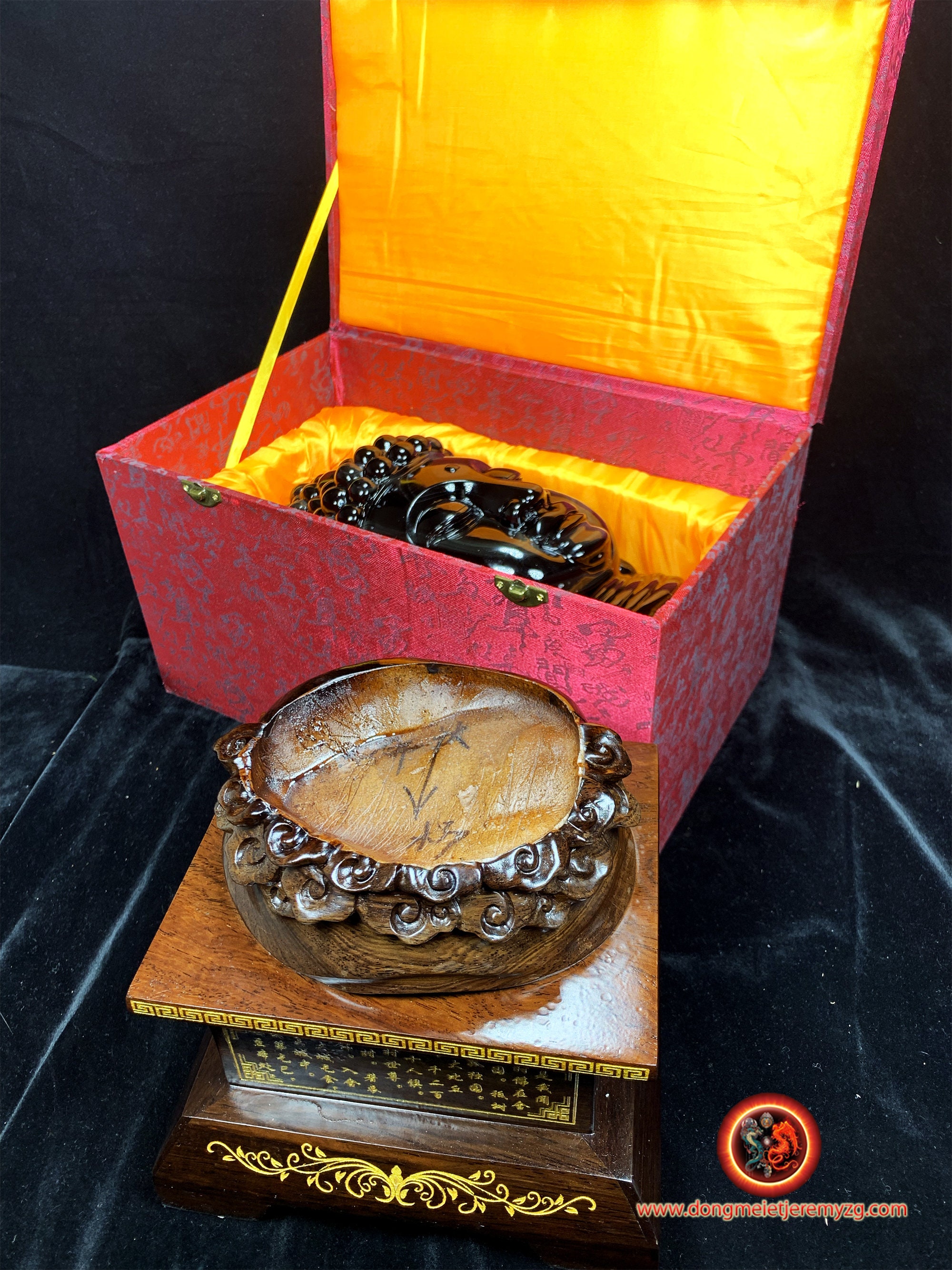 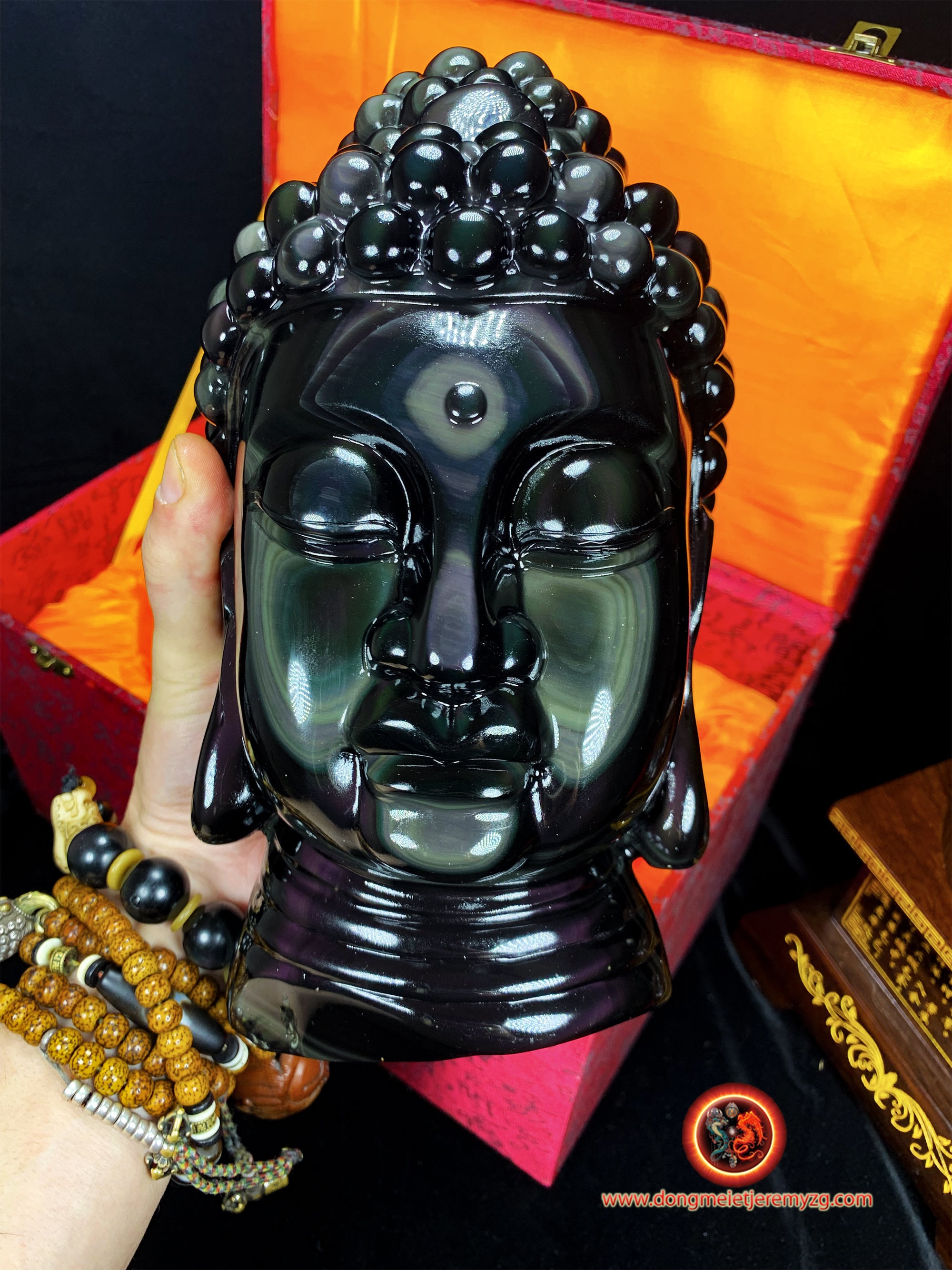 The head and the base are independent and fit perfectly into each other.

No treatment is carried out on our stones
As a gemologist graduated from the National Institute of Gemmology of Paris, all our stones are appraised and certified.

Video available via this link on our youtube channel
https://youtu.be/-SBNpK3pue4

To see our entire collection of Buddhist statuettes, please click on this link
https://www.etsy.com/fr/shop/DongmeietJeremyZG?ref=seller-platform-mcnav&section_id=22229988

Obsidian is a glassy volcanic rock, of the Rhyolite family, formed when acid lavas (unlike basic lavas) rich in silica containing very little water (- 3%) solidify. Obsidian is formed by a cooling of magmatic lava rich in gas but too viscous for them to escape and thus remain trapped in the rock.

At the time of its exit from the volcano, it undergoes a cooling freezing the mechanisms of crystallization. A piece of frozen lava.

Obsidians are very often interpreted as lavas that have undergone very rapid cooling and are then compared to the frozen edges of or cushion lavas. If the vitreous structure is the common point between the basic frozen borders and the acidic obsidians, the causes and magnitude of this structure are totally different. And most importantly, obsidians are not rapidly cooled flows.

When microscopic crystals of feldspar or mica are formed along the lava flow and included in obsidian in lamellar form, light, penetrating in turn two different materials, obsidian and feldspar, produces an interference giving this so-called non-spectral color scheme.

A beam of light of wavelength λ arrives on an ordered matter characterized by the periodic repetition of atomic planes distant from a length d. The beam arriving on a foreground of atoms is partly reflected by them, while another part continues its path in a straight line. The beam passing through the foreground can also be reflected in part on the next plane of atoms, separated from the first plane of reflection by the distance d, and so on...

We are interested in the reflected beam, resulting from the superposition of the reflected waves on the different successive planes. The wave that reflects on one plane of an atom travels less distance than the wave that reflects on the next plane. If θ is the angle of incidence, a geometric analysis shows that the difference in walking between the two beams is: 2×d×in θ.

This is where the undulating nature of light comes in. When several waves meet at the same point in space, they give rise to the phenomenon of interference. In particular to observe a maximum of light (intense light task) it is necessary that the difference of walking between these waves is an integer multiple of the wavelength. Thus, they are all in phase and are constructively summed up. The condition for obtaining a maximum intensity is therefore written: 2 × d × sin θ = n × λ, which is called bragg diffraction condition with:

θ: half angle of deviation (half of the angle between the incident beam and the direction of the detector);

Different colors can appear in the form of successive layers on the surface of the stone.

When making curved objects, the different colors appear and change according to the inclination of the reflection to the light.