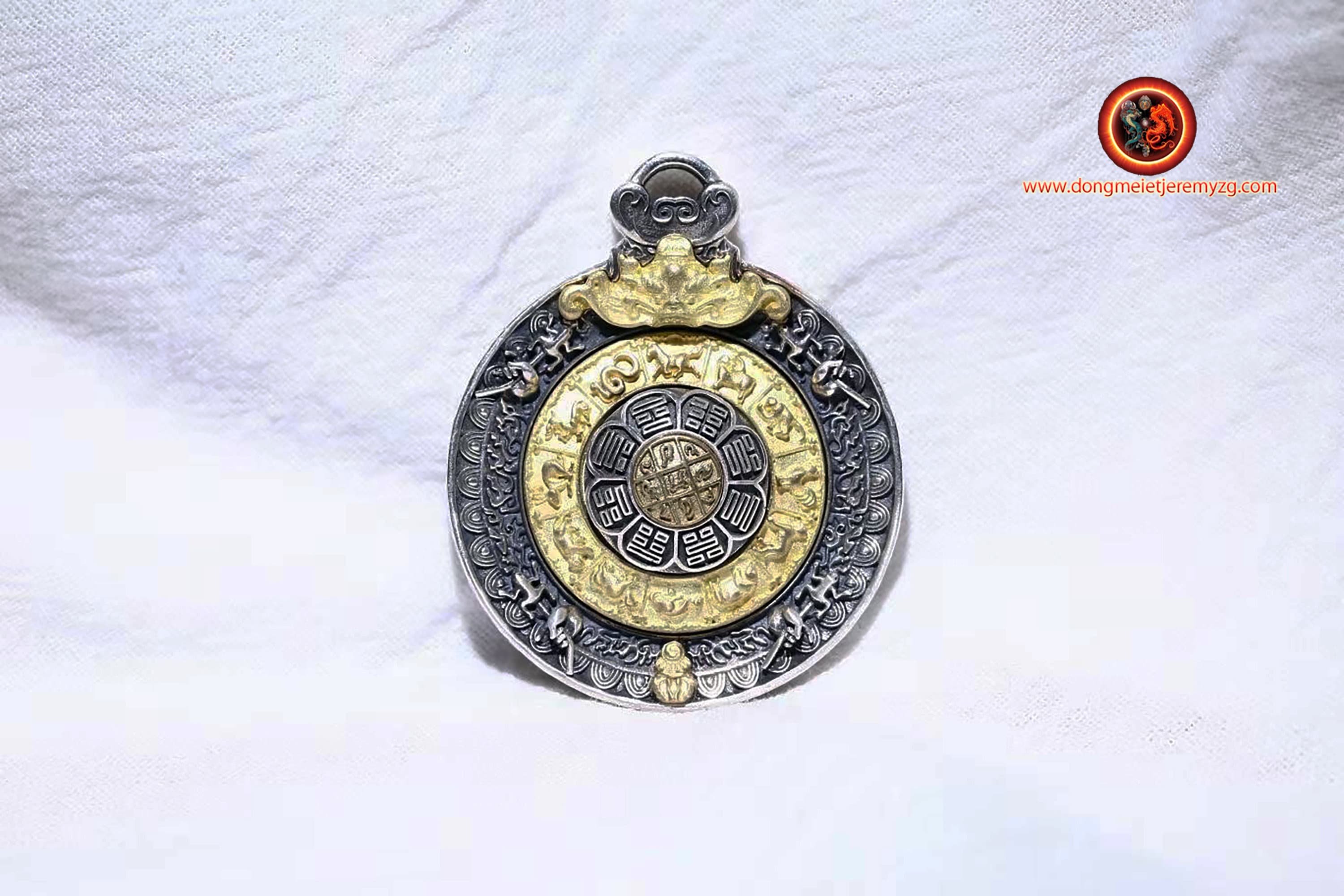 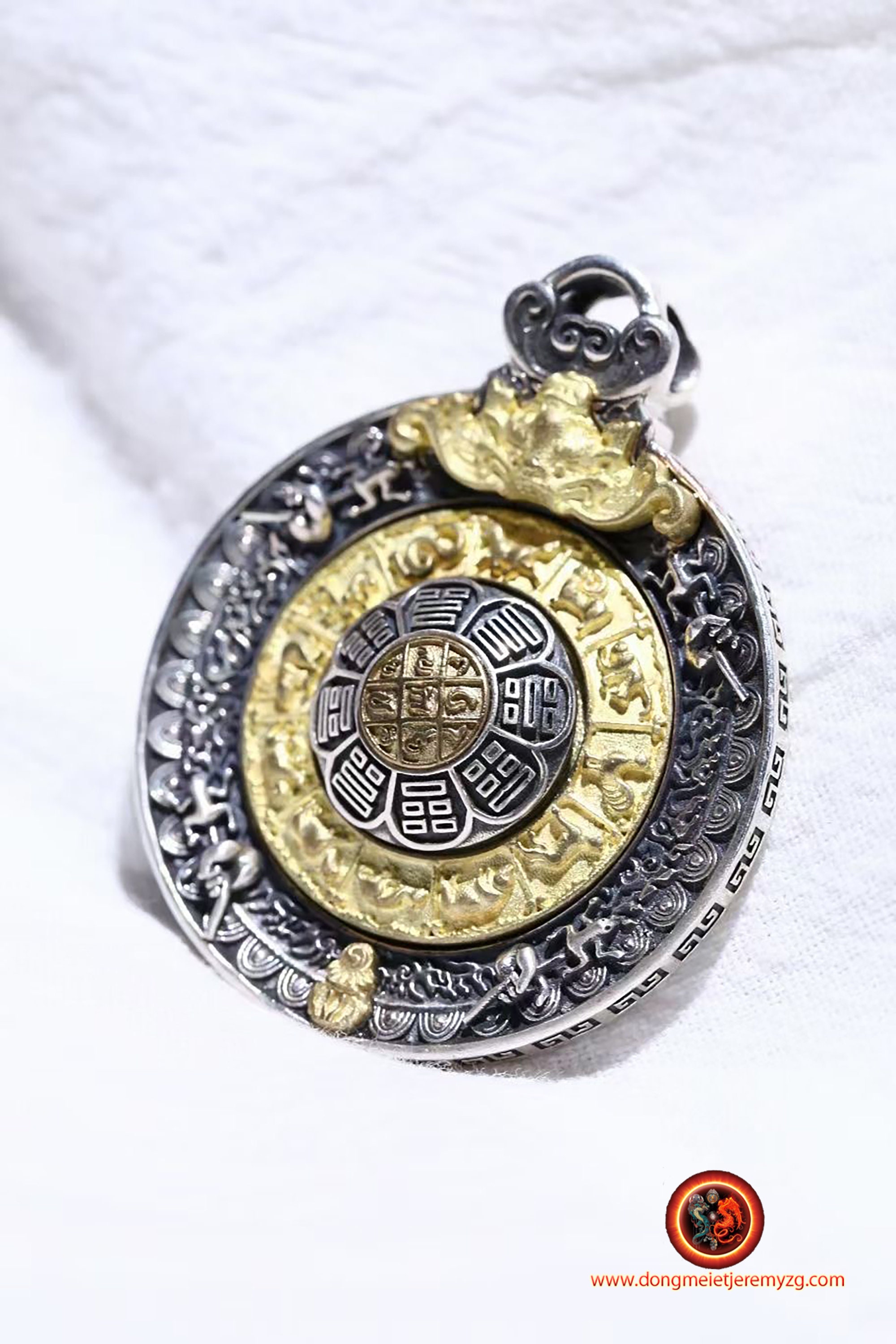 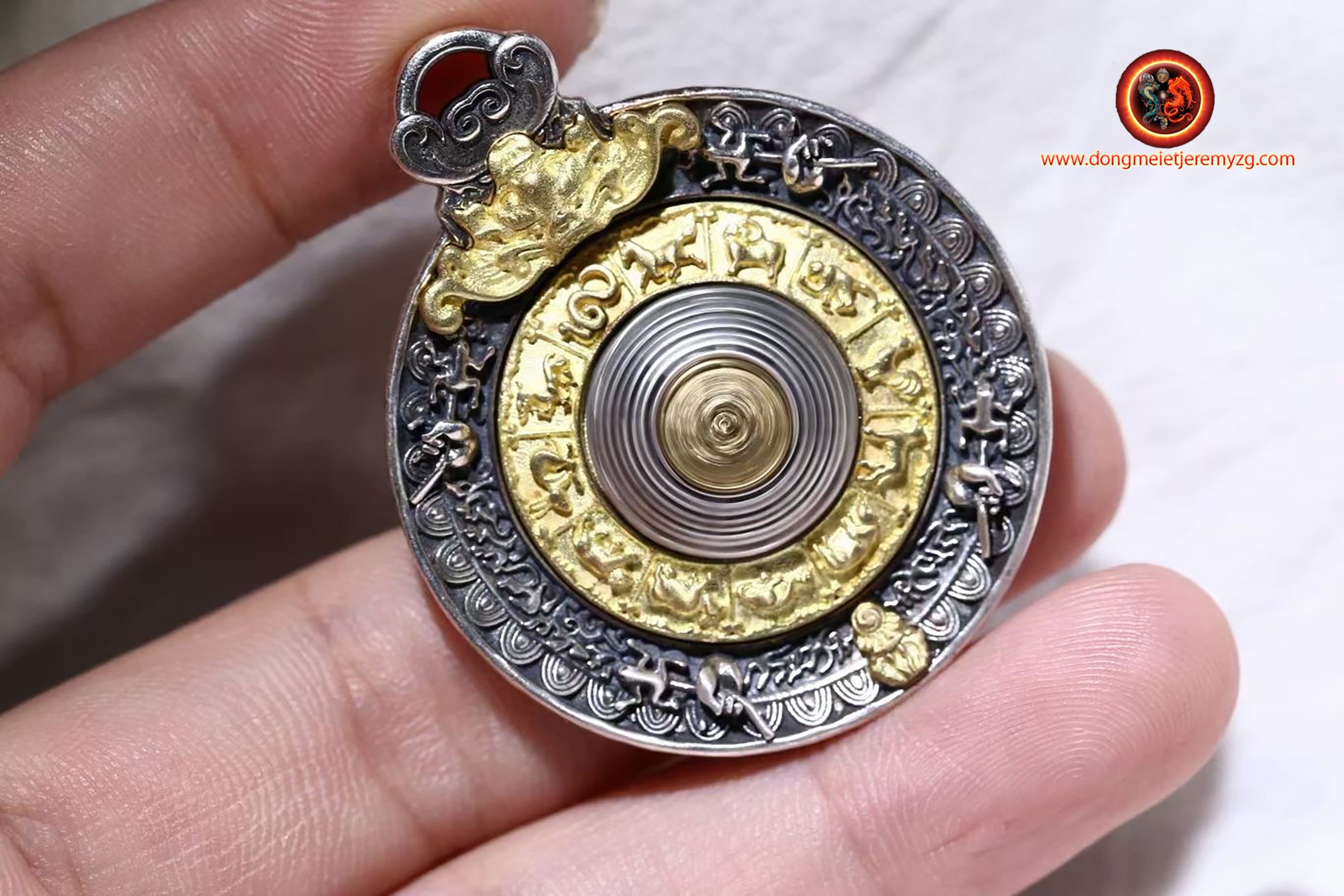 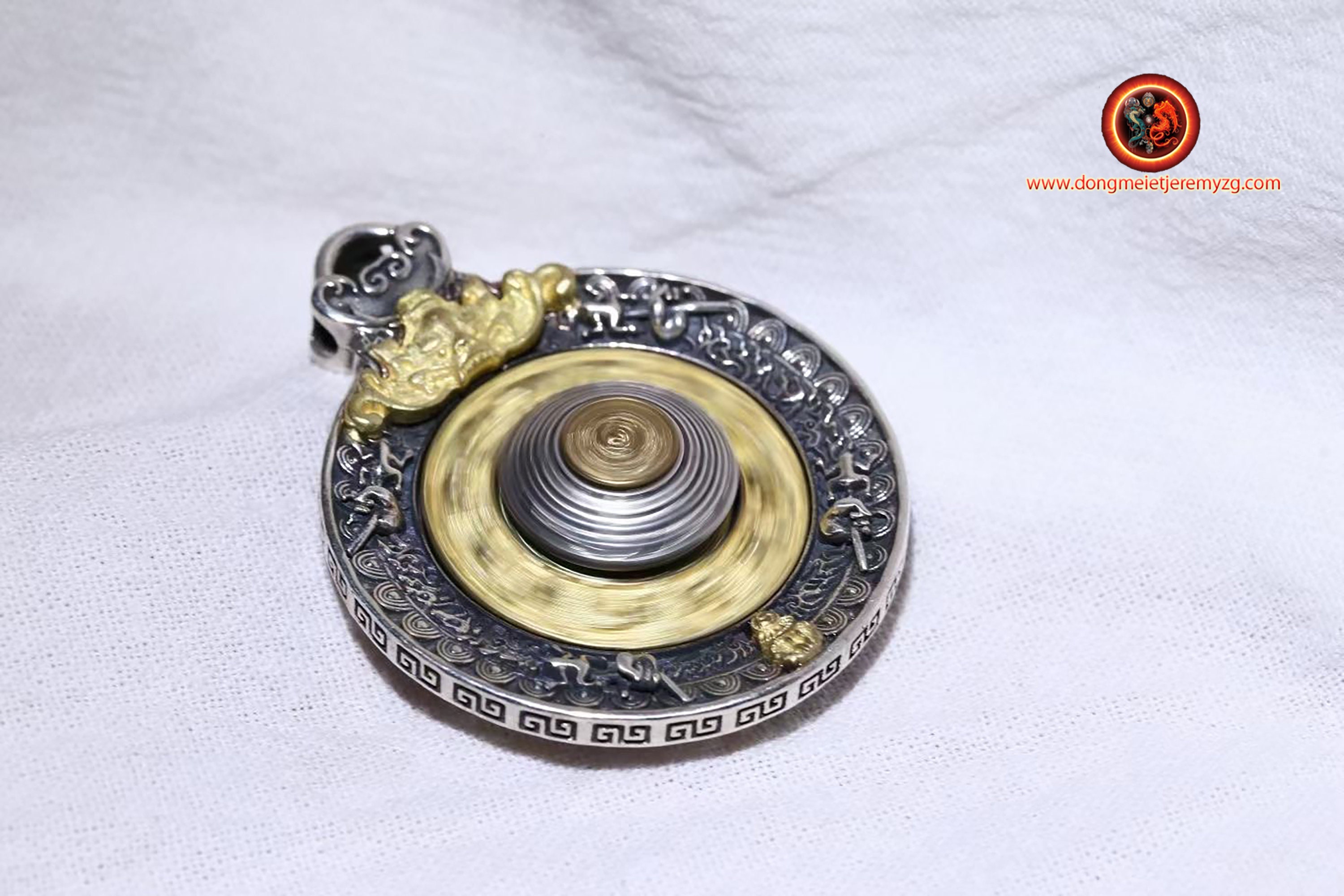 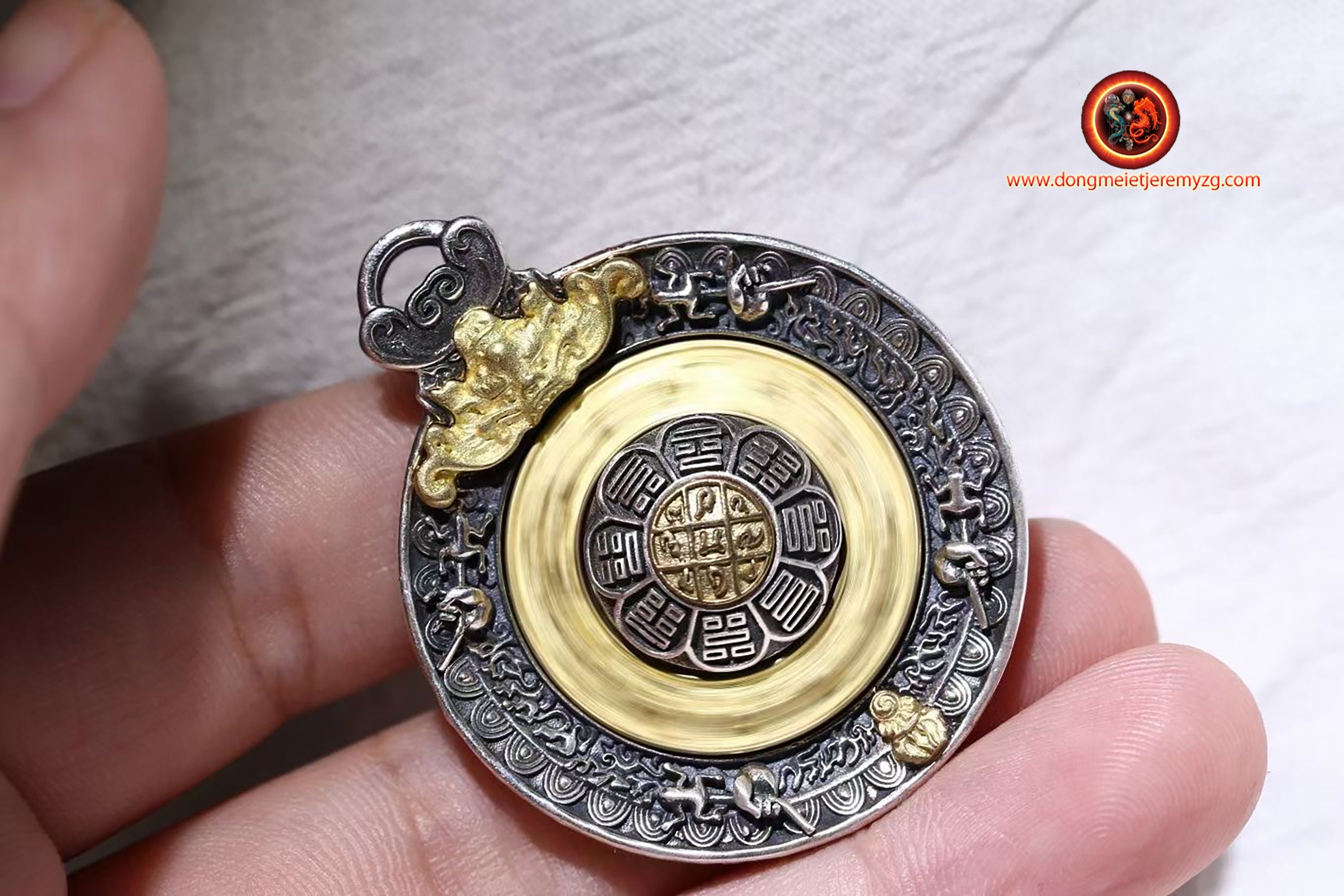 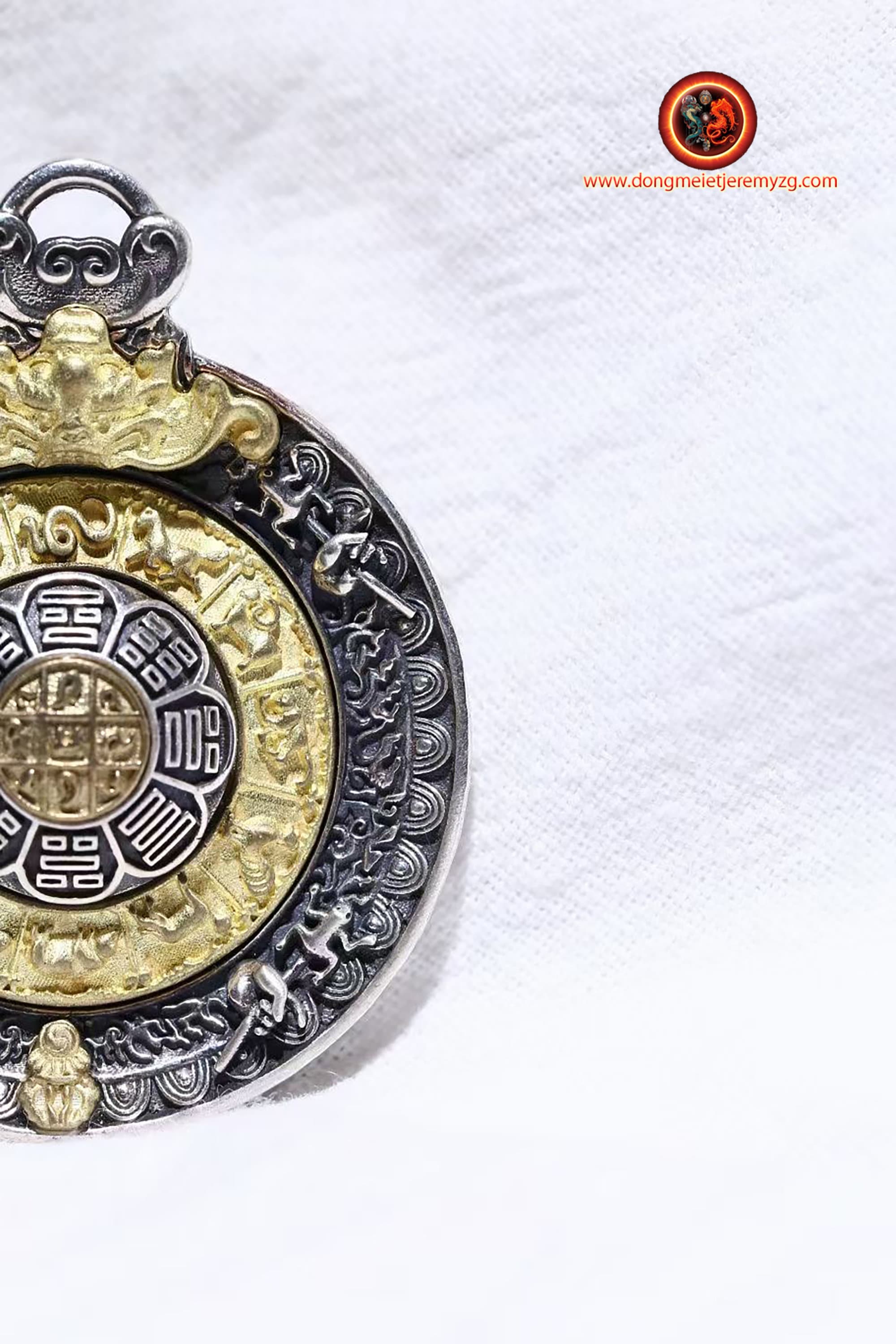 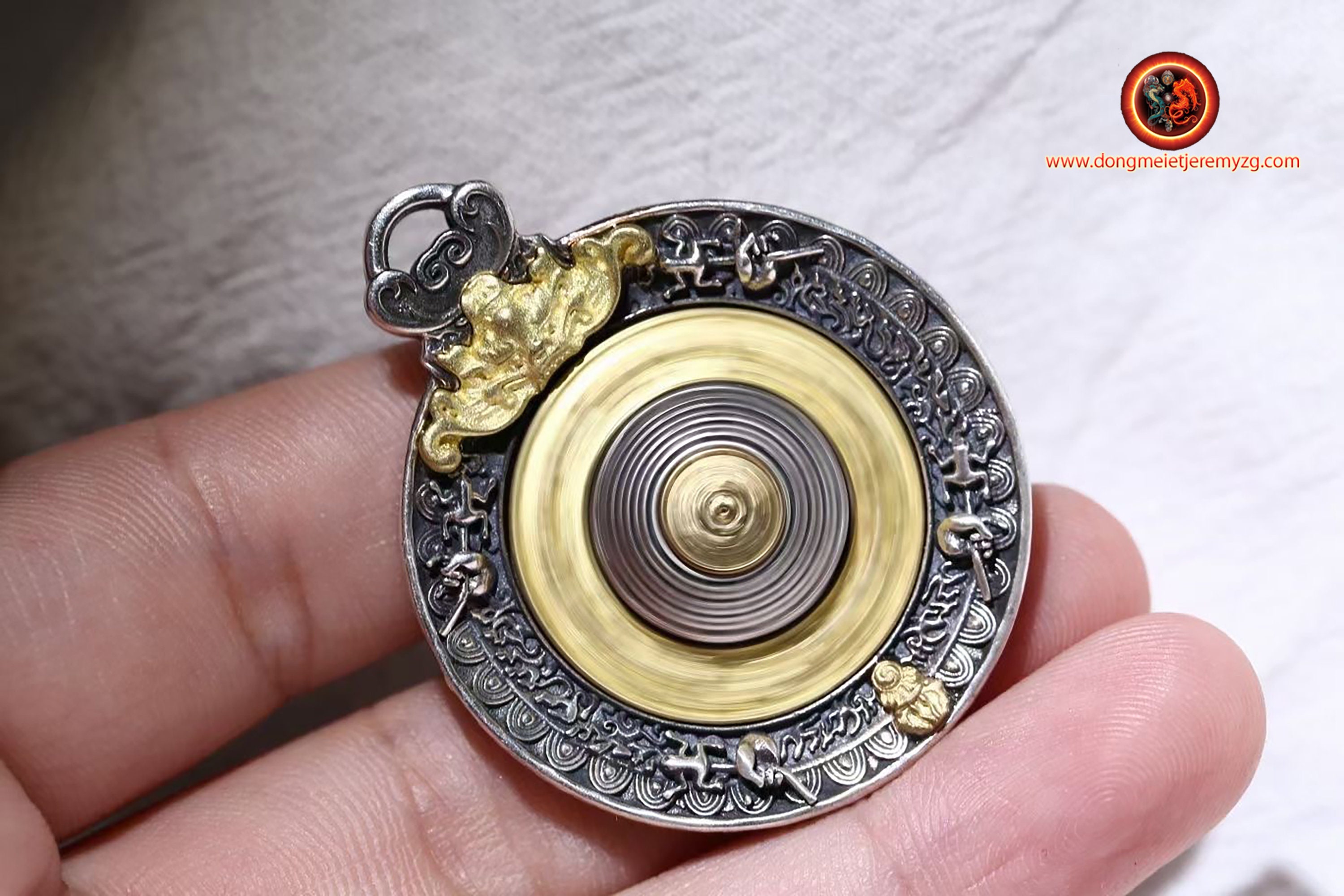 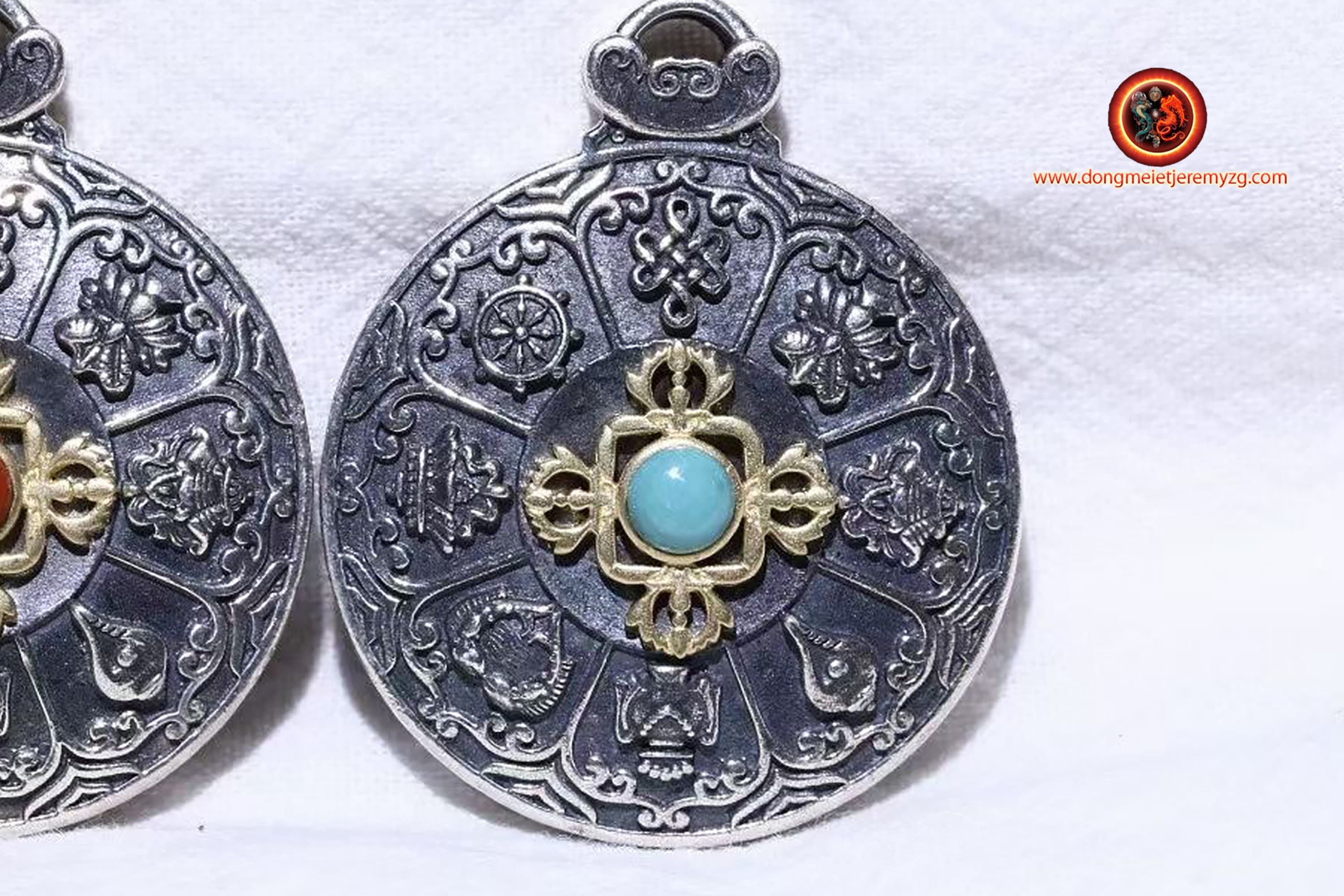 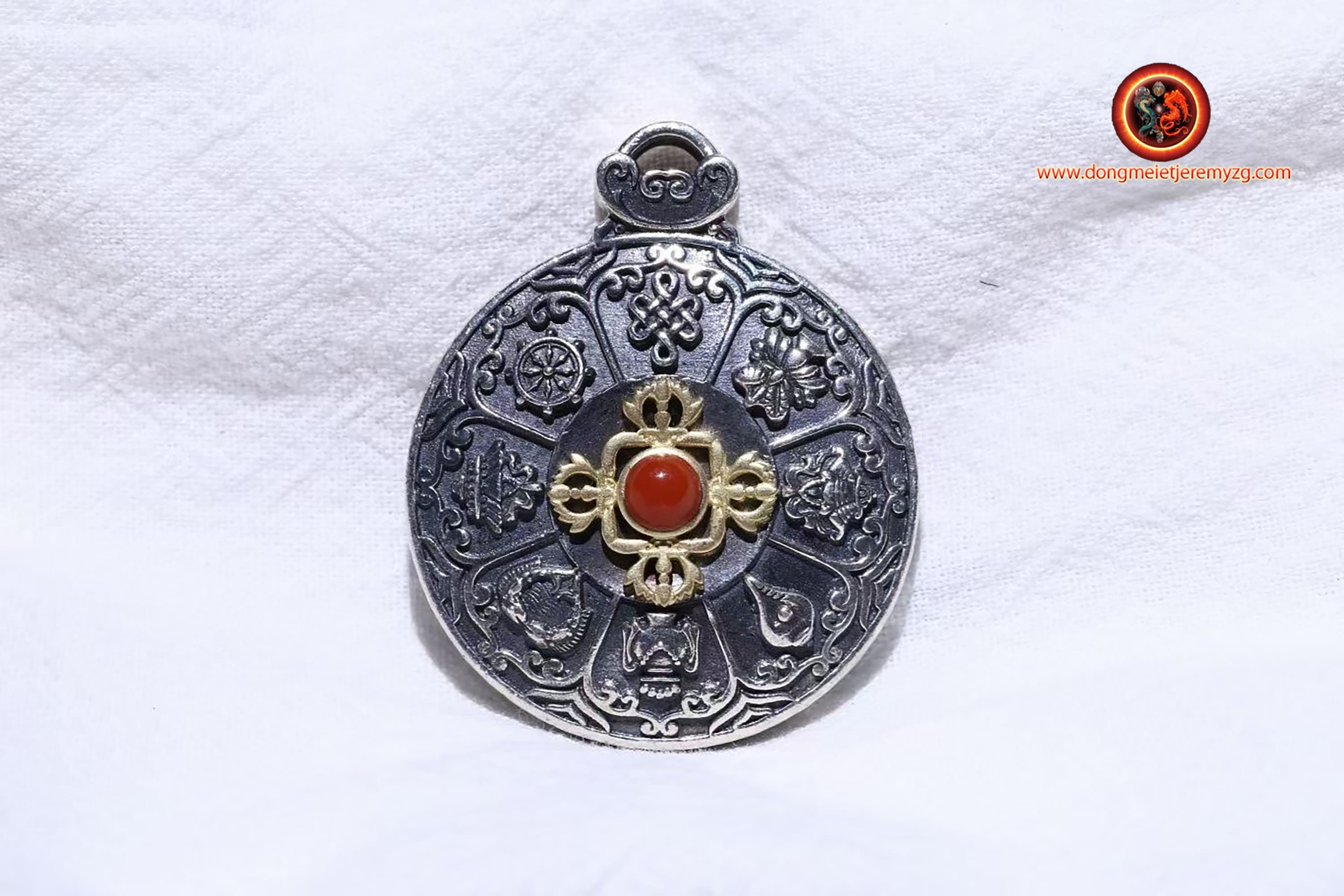 Tibetan Buddhist pendant,
Tibetan protection amulet.
Silver 925 and copper.
bagua, 8 auspicious symbols of Buddhism
Turquoise or agate on the back to choose from.

Dimensions of the pendant: 42mm high by 34mm wide by 10mm thickener
Weight of 26 grams
Our money is guaranteed at 92.5% pure silver and 7.5% copper, without any other cutting agent.

pendant rotating in the center thanks to a precision ball bearing system developed in Germany.

Traditionally Tibetans wear this amulet on their belts in order to protect them from evil fate.

In the Buddhist tradition, these 8 auspicious signs represent the offerings presented by the great Vedic gods – an ancient civilization of India at the origin of Hinduism – to Siddhartha Buddha after his Awakening. Brahma was the first of these gods to appear even before the Buddha's birth by presenting him with a wheel with a thousand golden rays, as a symbolic request to the Buddha to transmit his teachings by "turning the wheel of Dharma". Indra, Lord of Heaven and god of war and storm – and incidentally king of the gods – appeared next, offering the white conch for the Buddha to "proclaim the truth of the Dharma."

the parasol represents his head,
the two fish his eyes,
the vase his neck,
the lotus his tongue,
the golden wheel its feet,
the banner of victory his body,
the conch his word
the endless knot his mind.

In the first form of Indian Buddhism, the Buddha was painted aniconically, that is, without being represented in a human form, usually by an empty throne under an umbrella and under the Bodhi tree or by a stone marked with its divine imprints, which contain several auspicious symbols such as the insignia of the Buddha's divinity: the banner of victory, the lion throne, the trident, the Three Jewels, the eternal knot, the swastika, the conch, the pair of fish and the most common, the lotus and the wheel.

The Endless Knot or Tibetan Infinite Knot is a Buddhist symbol that represents the movement of what is eternal, intertwined spiritual paths and time.
The shape of the Endless Knot is evocative of wisdom and compassion in Tibetan Buddhism. The top and bottom of the symbol symbolize the interaction of opposing and duo forces, which eventually meet and unite in the universe.
The Tibetan infinite knot also represents the inseparableity of the Void and the reality of existence.
Finally, since the Knot has no beginning or end, it is also defined as the Wisdom of Buddha

A traditional instrument of Tibet, the conch is considered to be the symbol of the power of the Buddha's word. The dextrorotatory conch wraps to the right and is the rarest and most conducive to the practice of Tibetan Buddhism. It symbolizes the sound of Dharma that awakens beings from the sleep of Ignorance, thus prompting them to accomplish their own good for the good of others. It is also the protection of the Jewel of Dharma, the progression from step to step towards the ultimate realization, Awakening or Enlightenment.

The Wheel of Dharma remains the most important symbol of Tibetan Buddhism, it symbolizes Buddhist law as well as the teaching of the Buddha who was the first to set this Wheel in motion. The Wheel of Dharma represents the eternal movement of the cycle of rebirths (or karma). It is also the continuity of the Buddha's teachings, in all its forms and in all directions, teaching that leads to Happiness and Liberation
The Wheel of Dharma is often depicted with four or eight branches, embodying the Four Noble Truths and the Eight Marches.


Symbol of absolute purity and Awakening, emblem of spiritual elevation, the lotus has the particularity of taking root in mud or mud, its stem bathed in water while its flower blooms majestically on water.
The lotus represents the elevation of the soul, first purely materialistic through its roots, then tasting the experience of water through its stem, to finally achieve enlightenment and awakening through its flower.


Tibetan Buddhists see through the Lotus the true nature of the Beings, the stem being the samsara (cycles of life and death), the flower symbolizing peace and serenity.

The Tibetan victory banner is the symbol of Buddha's teaching, the triumph over Ignorance, Buddha's doctrine over the forces of Evil: passion, fear of death, pride and luxure.

The vase of treasures represents a multitude of wealth, intellectual and prosperity. It is a Tibetan symbol of long life and abundance.

It also symbolizes the moral discipline, study and practice of the Dharma, especially through the good that one can bring to others and the development of altruism.

When you wear a Tibetan jewel representing the vase of treasures (it is not by chance that these pendants are often called "ghau" or "gao", simply because they can be filled), remember to slide inside everything that you think is beneficial for you and all living beings. These can be Tibetan mantras, or photos of people who are particularly important to you, or thoughts or prayers...

Originally, the two fish were the symbol of the Yamuna River and the Ganges, but they later became the symbol of good fortune for Hindus and Buddhists.
Among Tibetan Buddhists, the Golden Fish represents living beings who practice dharma, and who should not be afraid of drowning in the ocean of suffering, since they can freely swim as fish do in the water, in order to choose their rebirths.

The parasol symbolizes the activity that protects men from all evils: diseases, accidents, evil spirits. It also protects the beings of the lower worlds. In Tibetan Buddhism, the umbrella protects us from suffering. The Tibetan umbrella is a guarantee of wisdom.