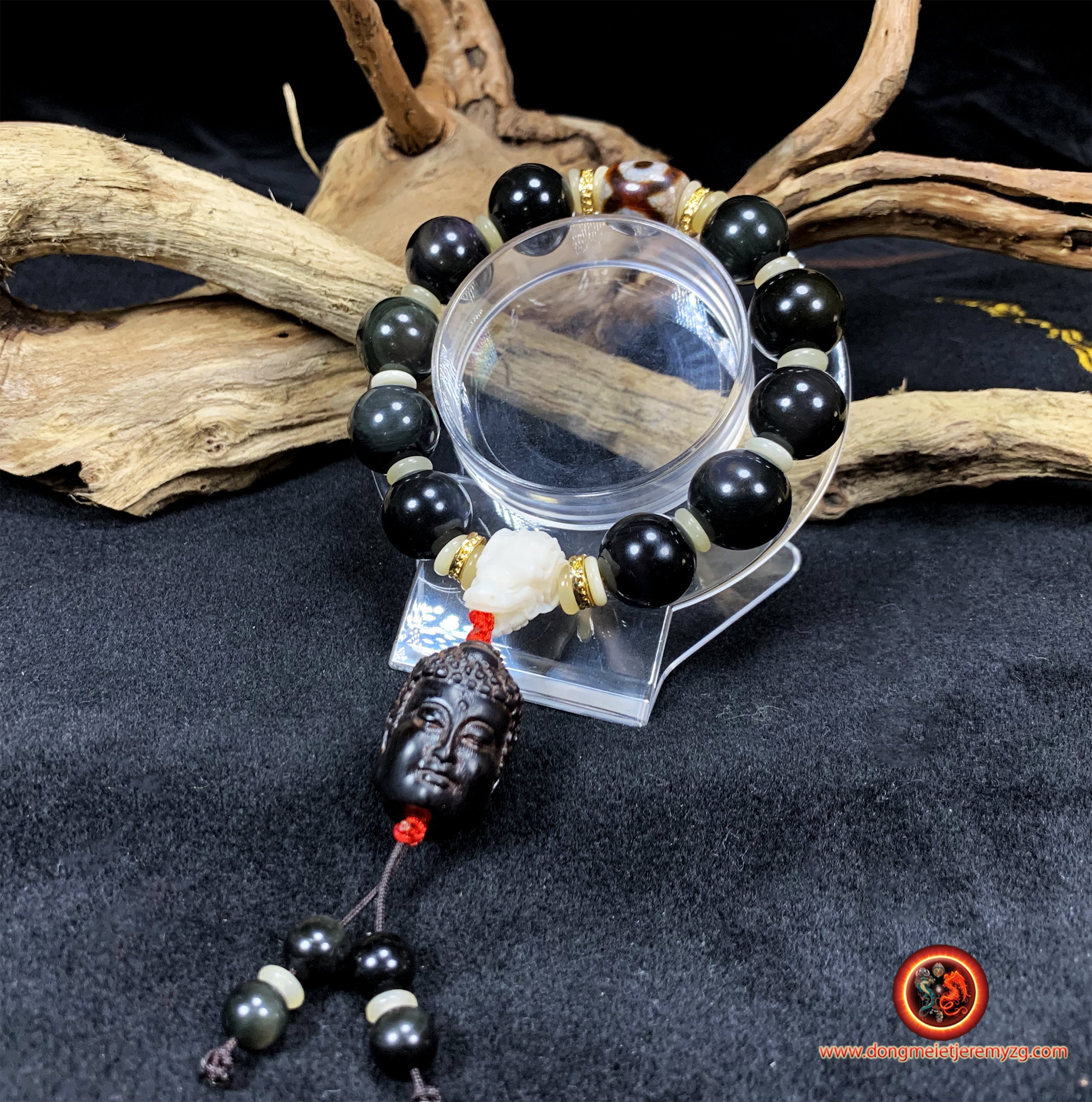 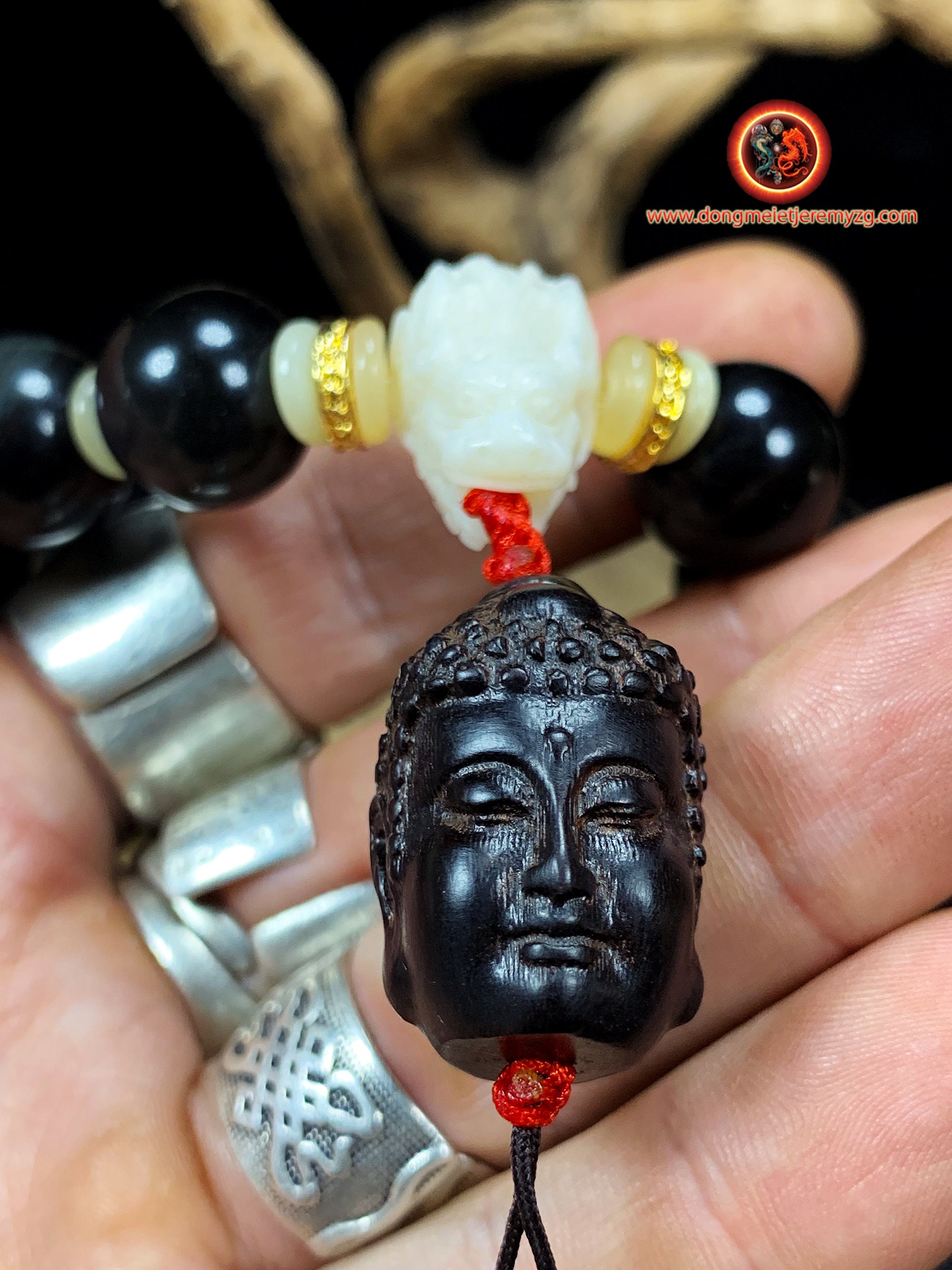 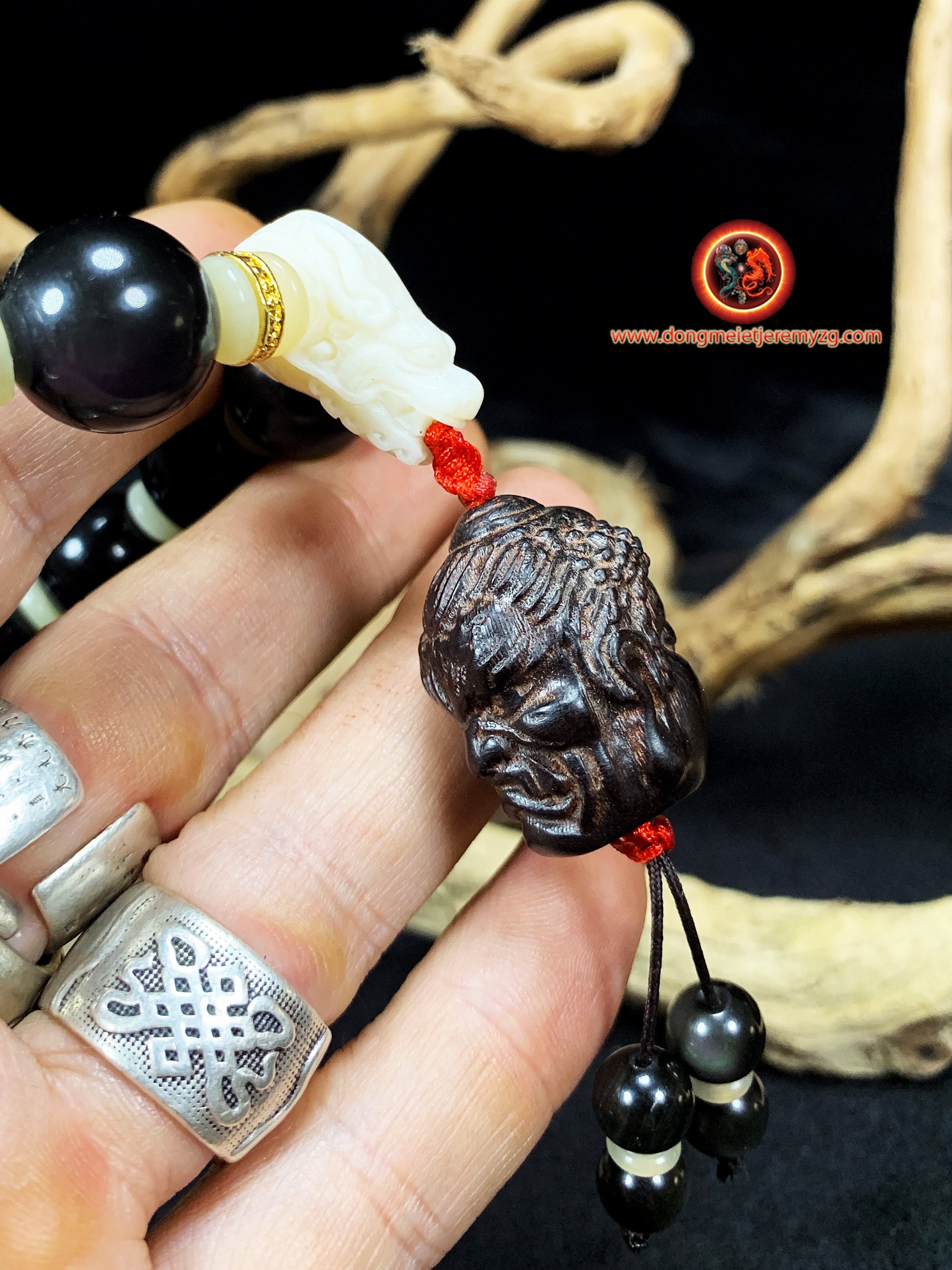 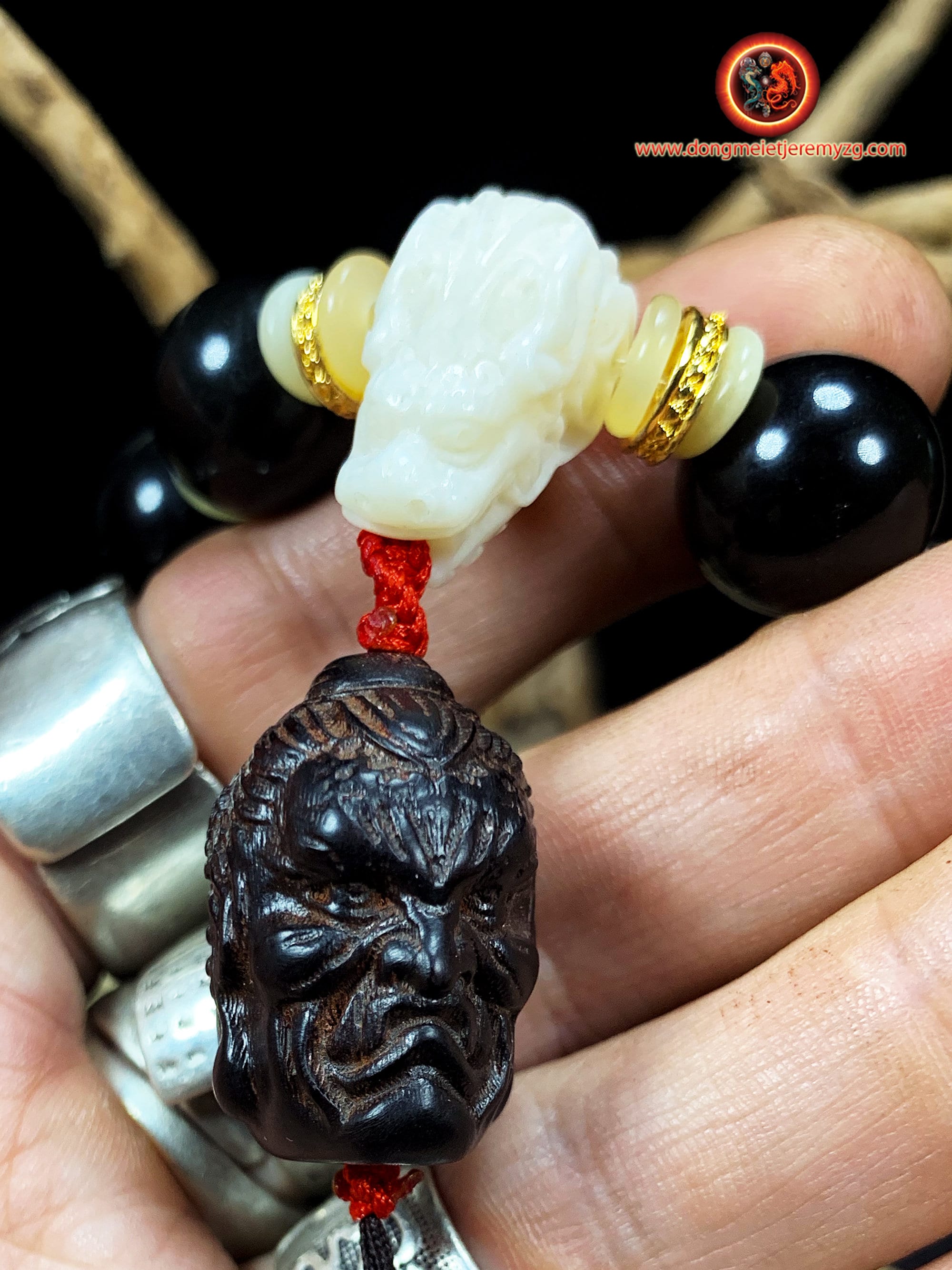 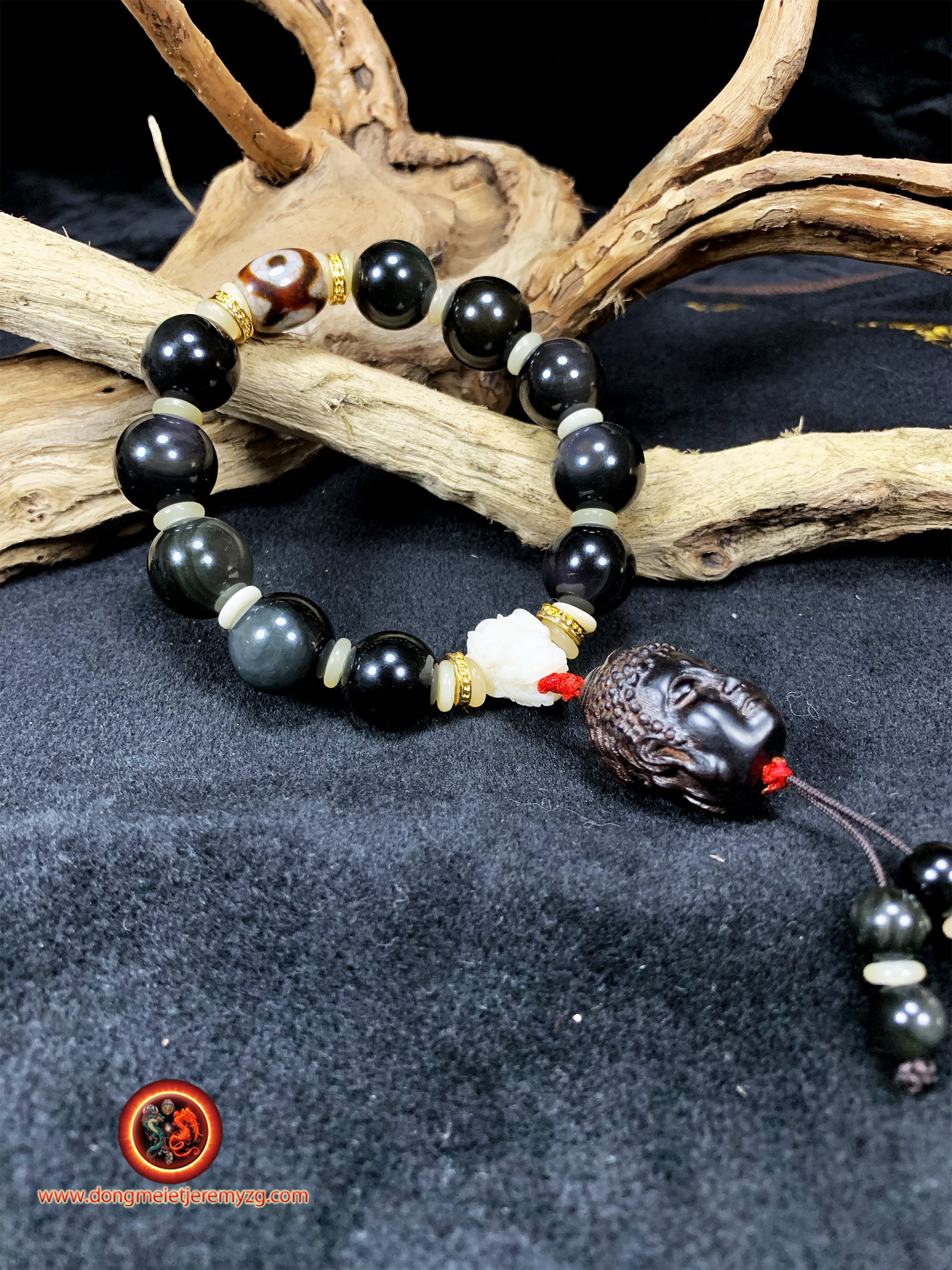 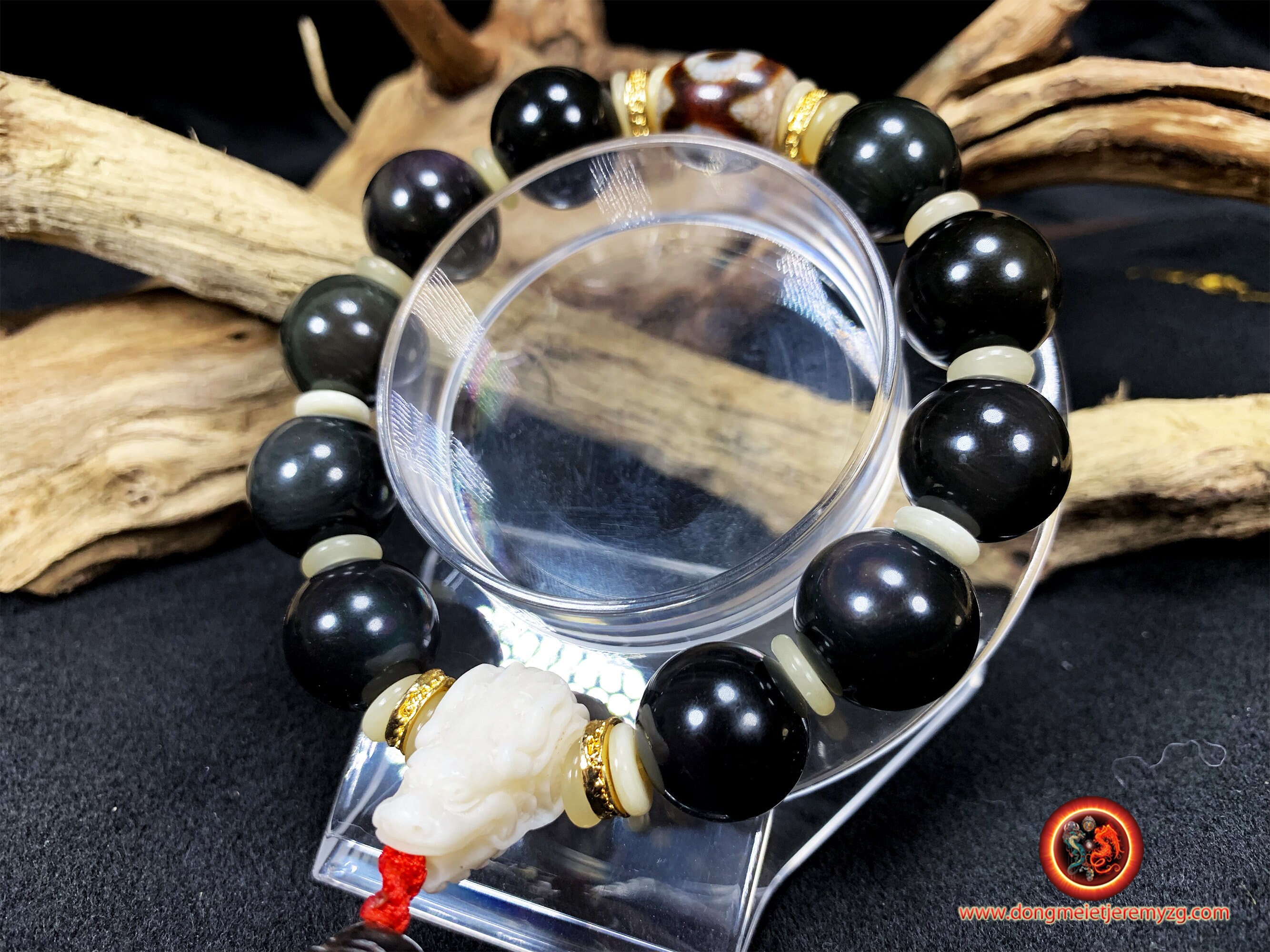 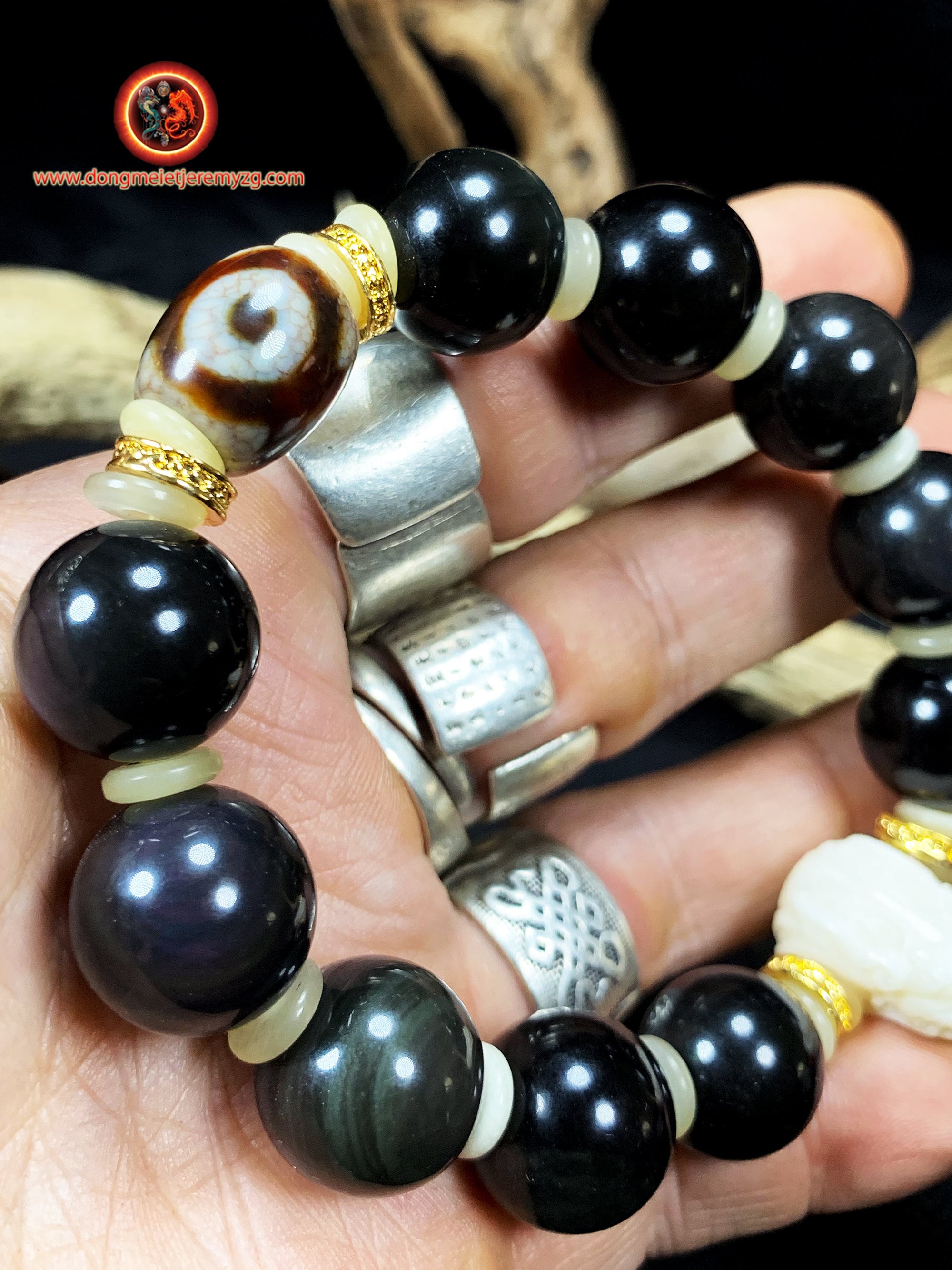 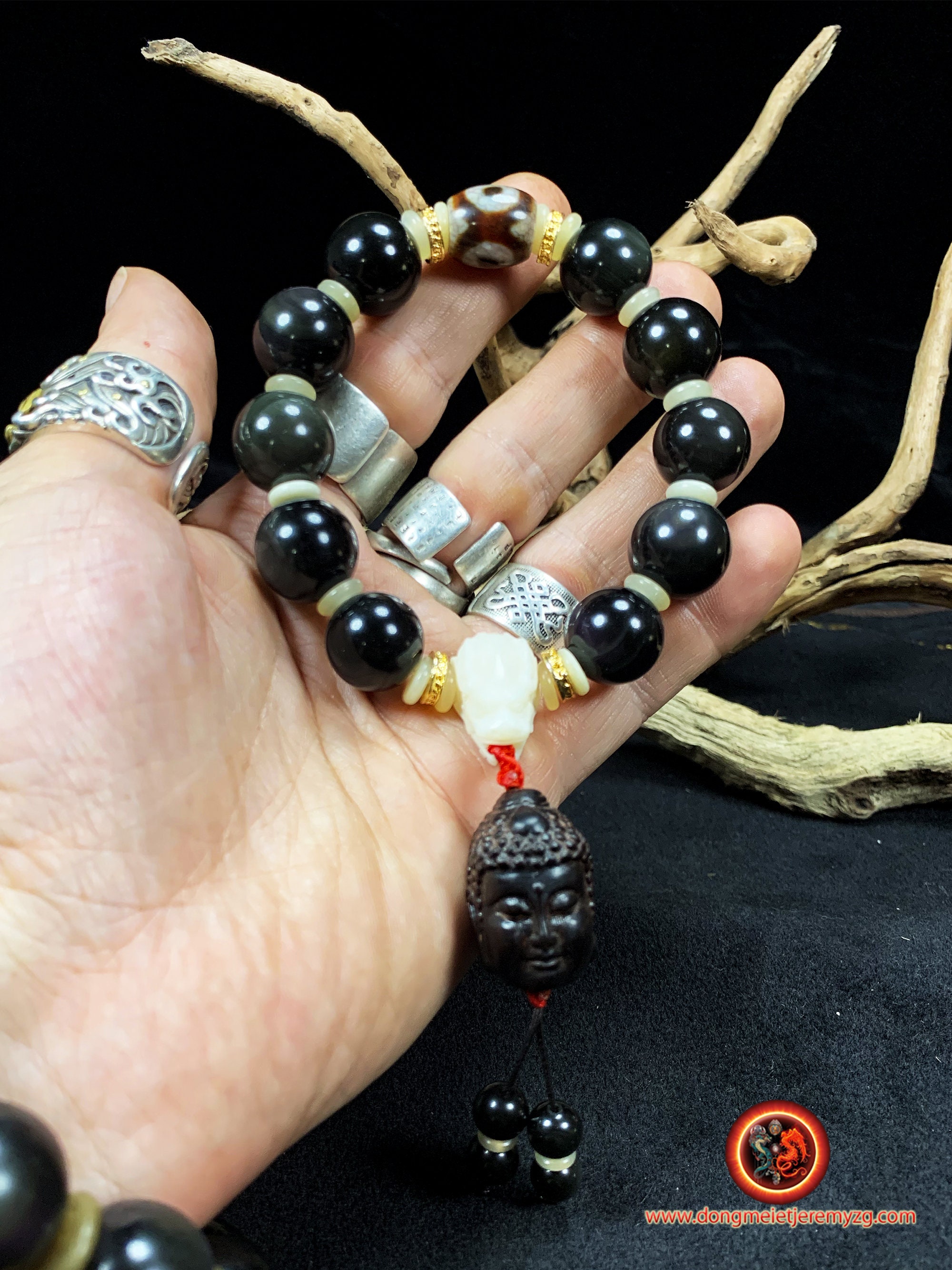 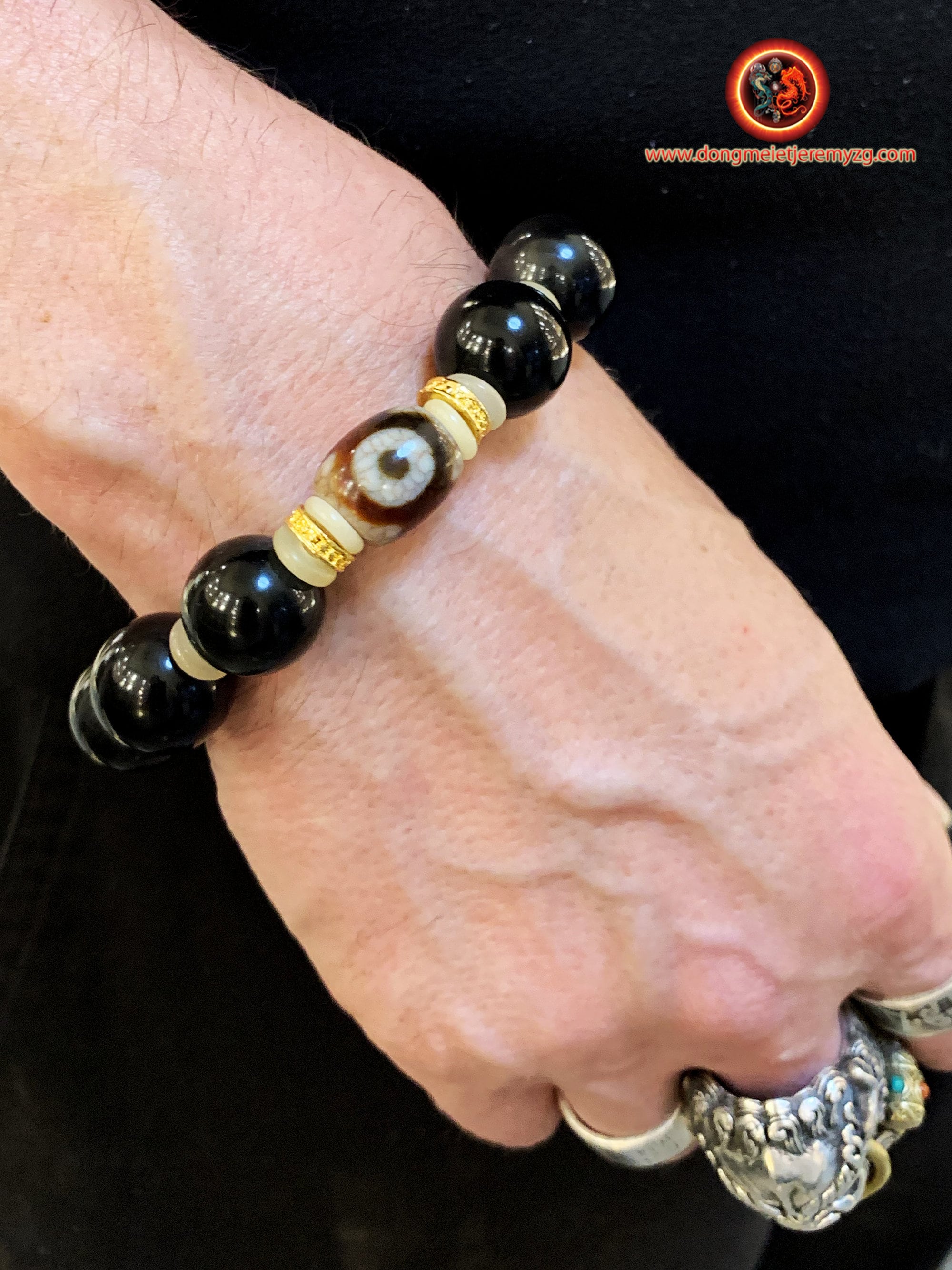 Malas smaller than 108 are called wrist malas, most often with 10 beads (the top 10 followers of Sakyamuni Buddha).

This bracelet mounted on ultra resistant extendable cord is composed of 10 beads of obsidian celeste eye from Mexico.
Pearls of very beautiful quality of 15mm in diameter each.

We have between these 10 pearls, added a DZI, authentic Tibetan sacred agate.
Our contemporary Dzis are made according to tradition, by Tibetan craftsmen located at the crossroads of Yunnan, Sichuan and Tibet in the Tibetan prefecture of Gyaltran at 4000 meters above sea level.
The stone is agate, and the drawings on its surface are made by the hand of man, but according to a secret technique. A mixture of plant and lead is applied to their surface, the whole thing is cooked (at about 1200 degrees); at the exit and once the mixture is removed the drawings appear. According to some sources, some of the oldest Dzi would have been colored FROM THE INTERIOR using secret techniques lost for a long time...

A huge number of counterfeits circulate, as well as modern DZIs sold as antiques at astronomical prices.

This DZI is a three-eyed DZI, and, according to Tibetan tradition, the 3-eyed Dzi represents the three stars of luck, happiness, honor and longevity. It is the manifesto of the Hindu god of wealth, the Kubera. This 3-eyed pearl creates the favorable conditions to enjoy fortune, happiness and prosperity.

The Dzi is a Tibetan pearl, of distant origin, bringing many mystical benefits and benefits to its wearer. He is a Tibetan talisman or amulet, the king of lucky charms, sometimes revered as a true deity. The success of the Tibetan pearl comes from its multiple eyes, up to 21.
The Dzis are supposed to bring good fortune, ward off evil spirits, and protect its wearer from dangers and accidents, and even bring longevity and good health.

The finishing pearl, which is called Guru's pearl or Buddha's head is a dragon's head carved out of buffalo bone.
In Buddhism, the Dragon is the vehicle of Vairocana, the white Buddha sitting in the east (or center). His throne supported by Dragons probably derives from the Chinese imperial throne. The Turquoise Dragon is the mount of a large number of protective deities, guardians of treasures and gods rain and thunderstorms. As guardians of treasures, the Sino-Tibetan Dragons are the counterparts of the Indian nagas. The Tibetan term druk (tib.brug) means both "dragon" and "thunder". Bhutan, a Buddhist kingdom, is called Druk Yul (Land of the Dragon). Its inhabitants, the drukpas, take their name from the spiritual lineage drukpa kagyu, originally from Tibet. This lineage was established by the sage Tsangpa Gyaré who, having once observed nine dragons disappearing in the sky near Gyantse, decided to establish the monastery of Ralung. In Tibetan Buddhism, the rise to heaven of a group of Dragons is a good sign.