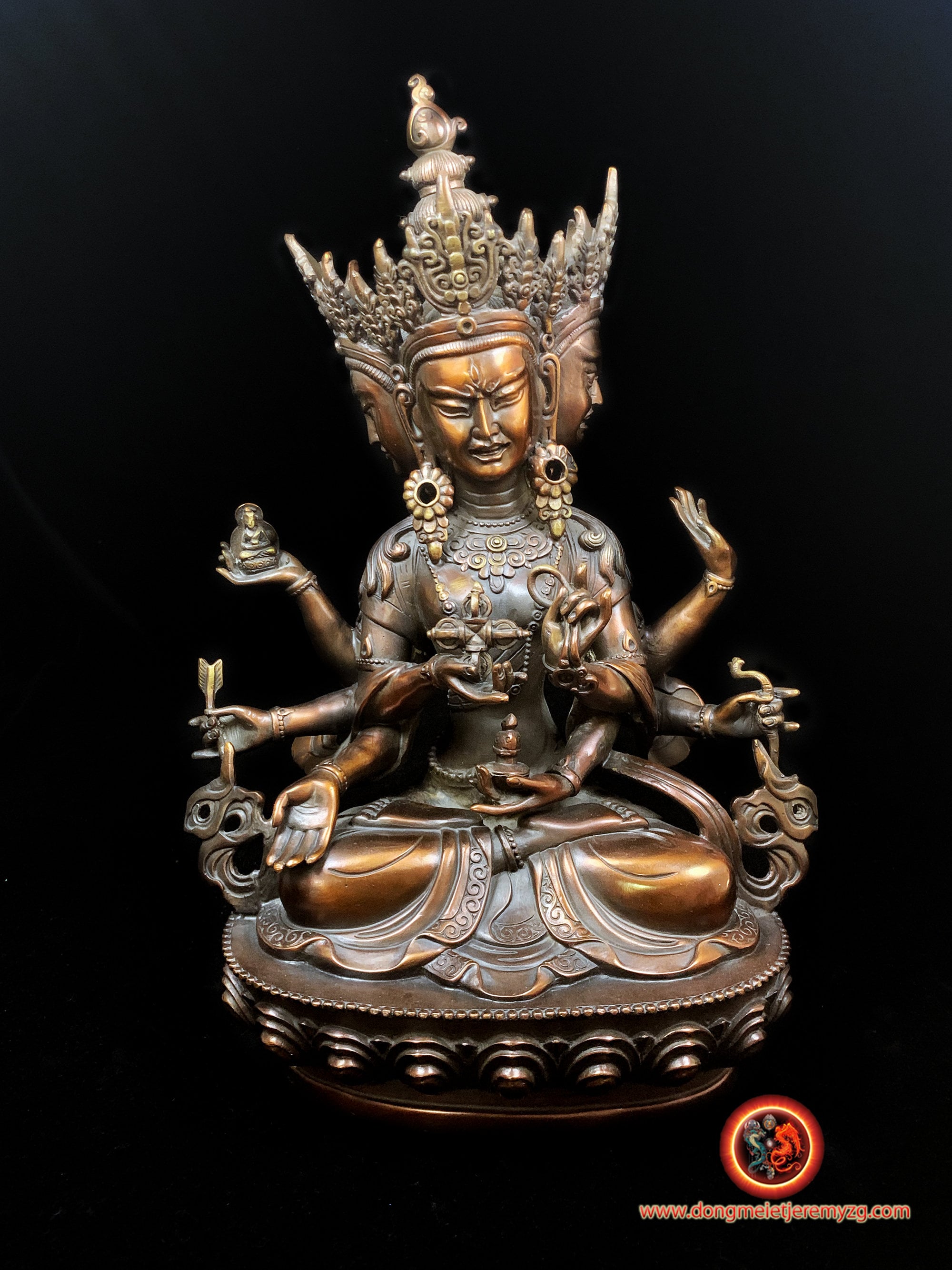 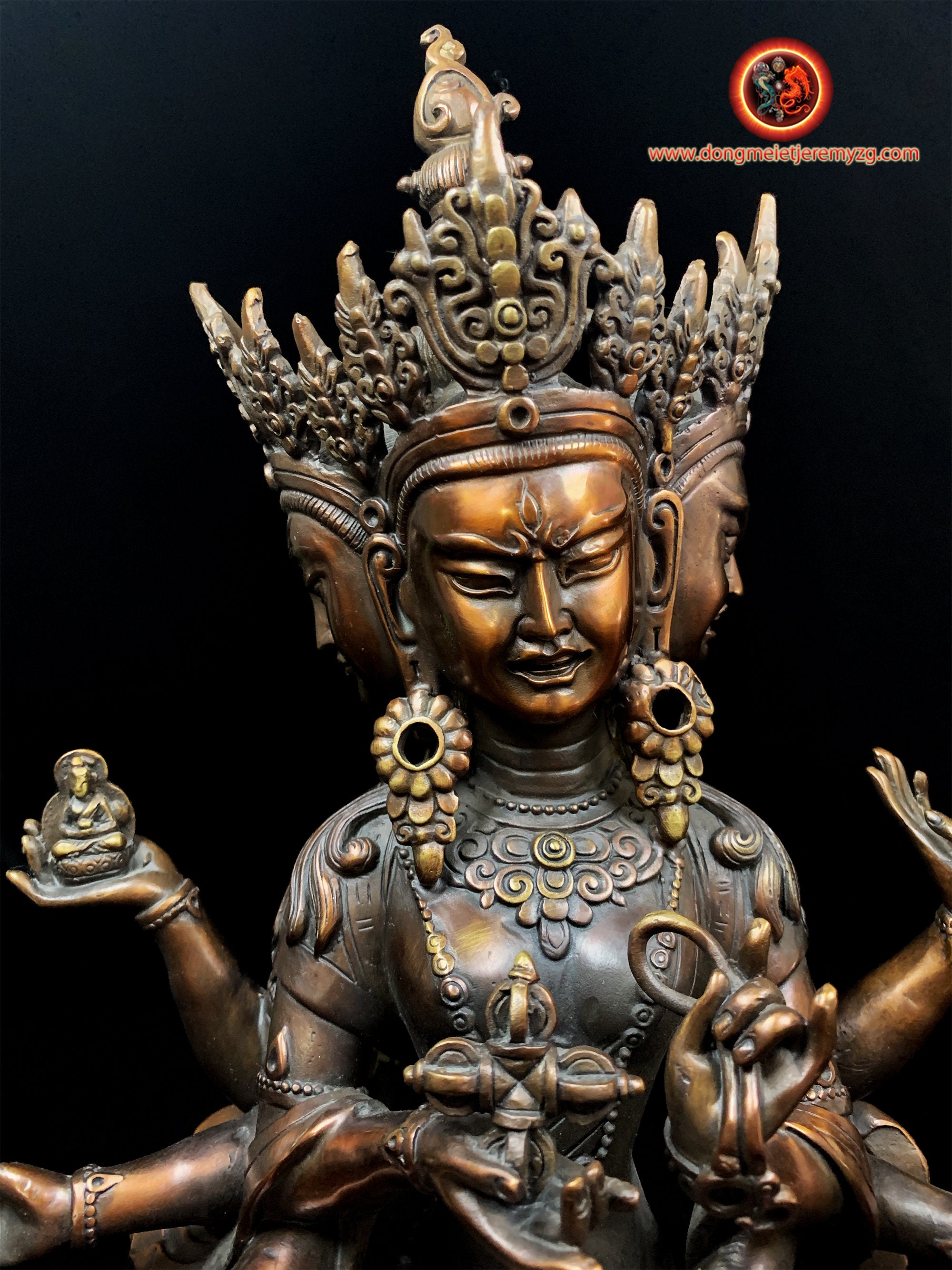 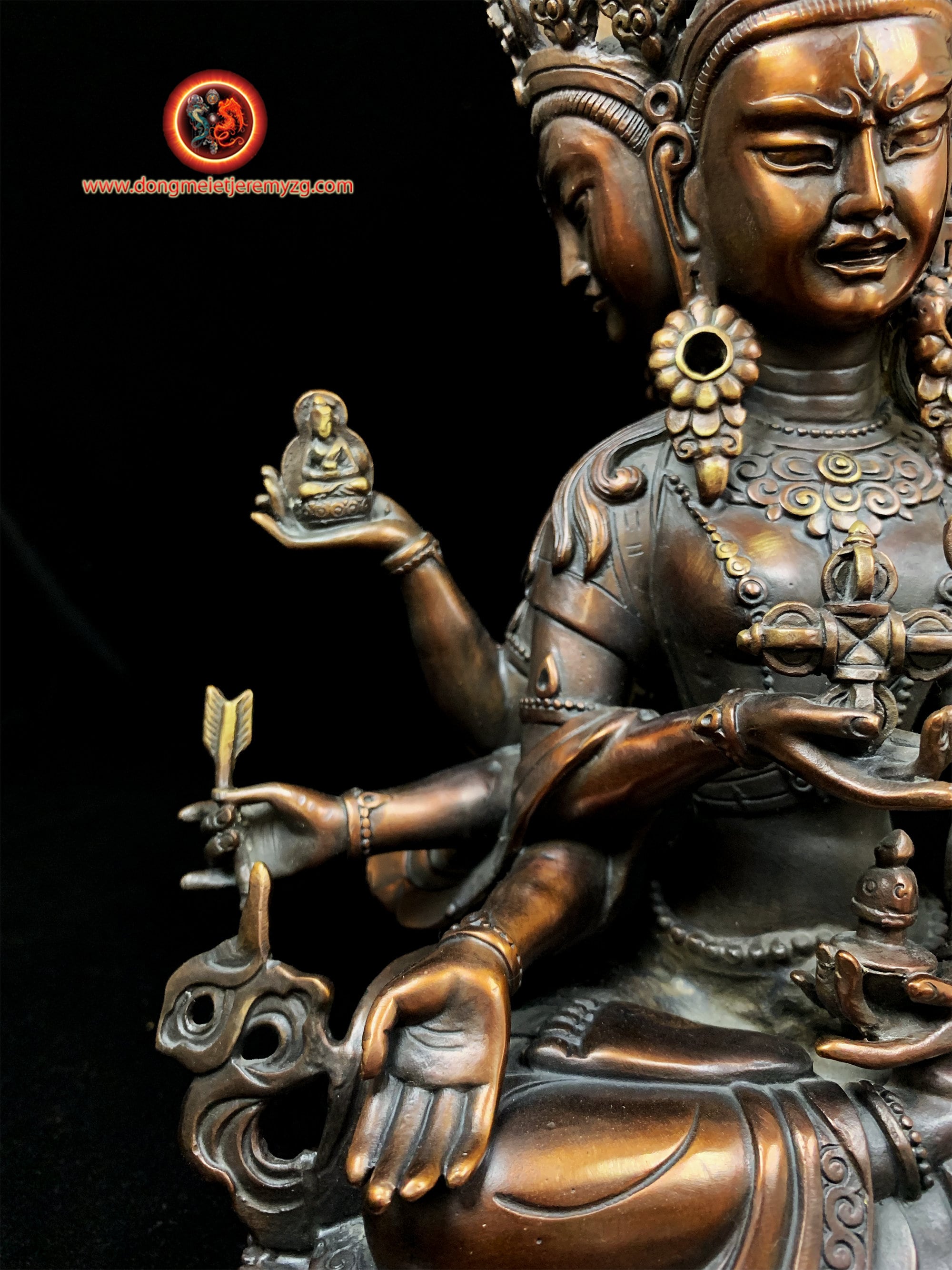 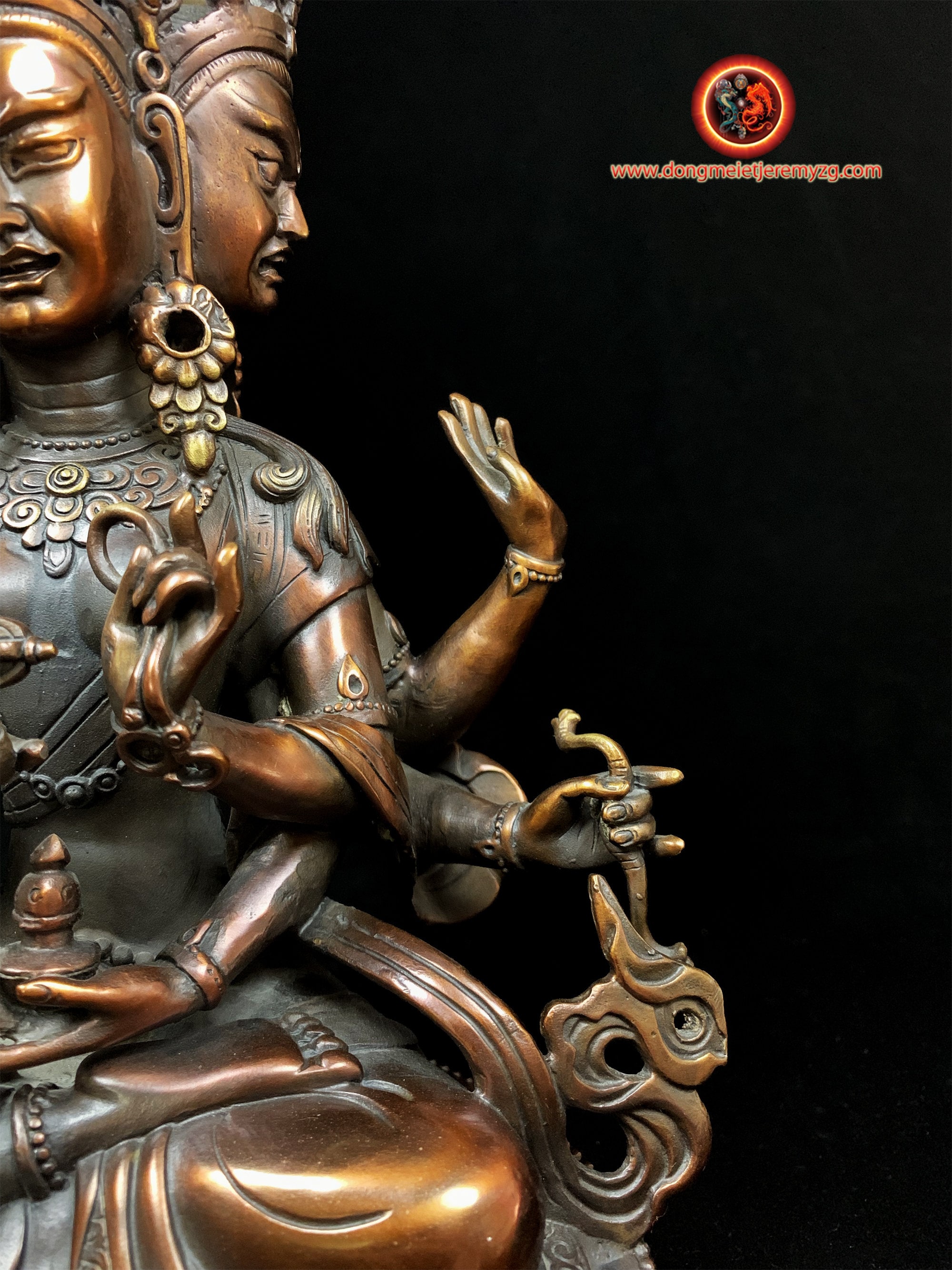 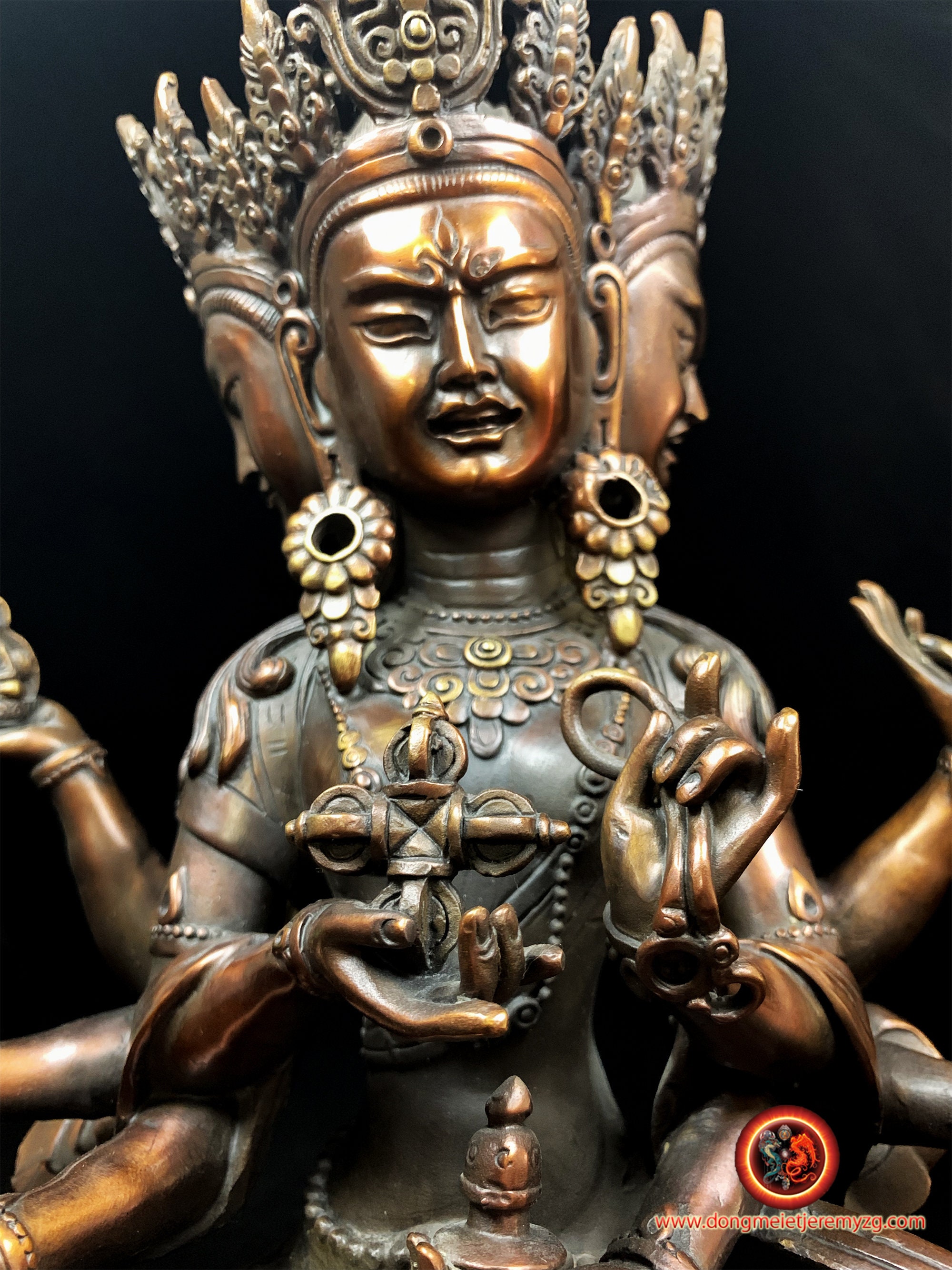 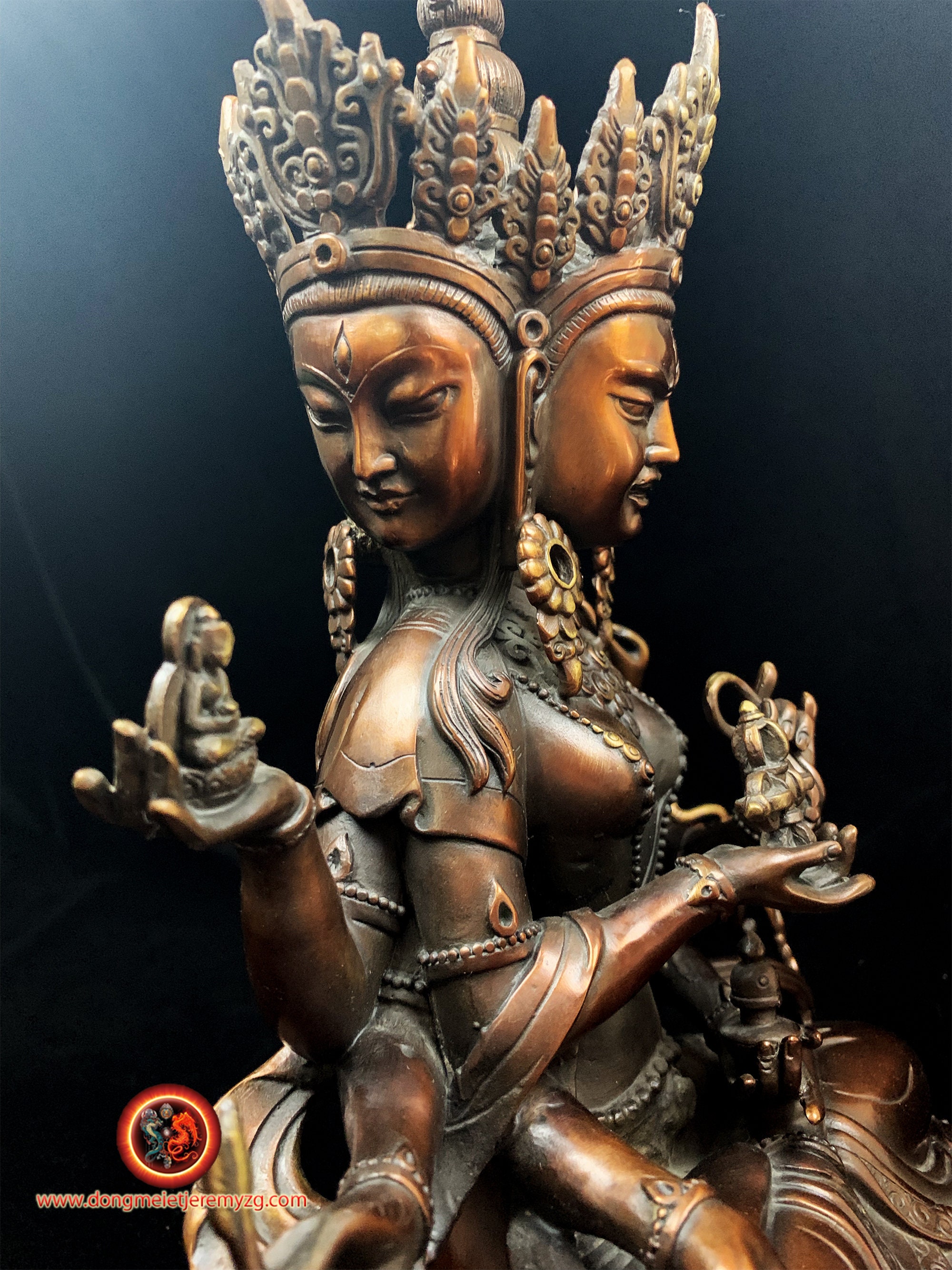 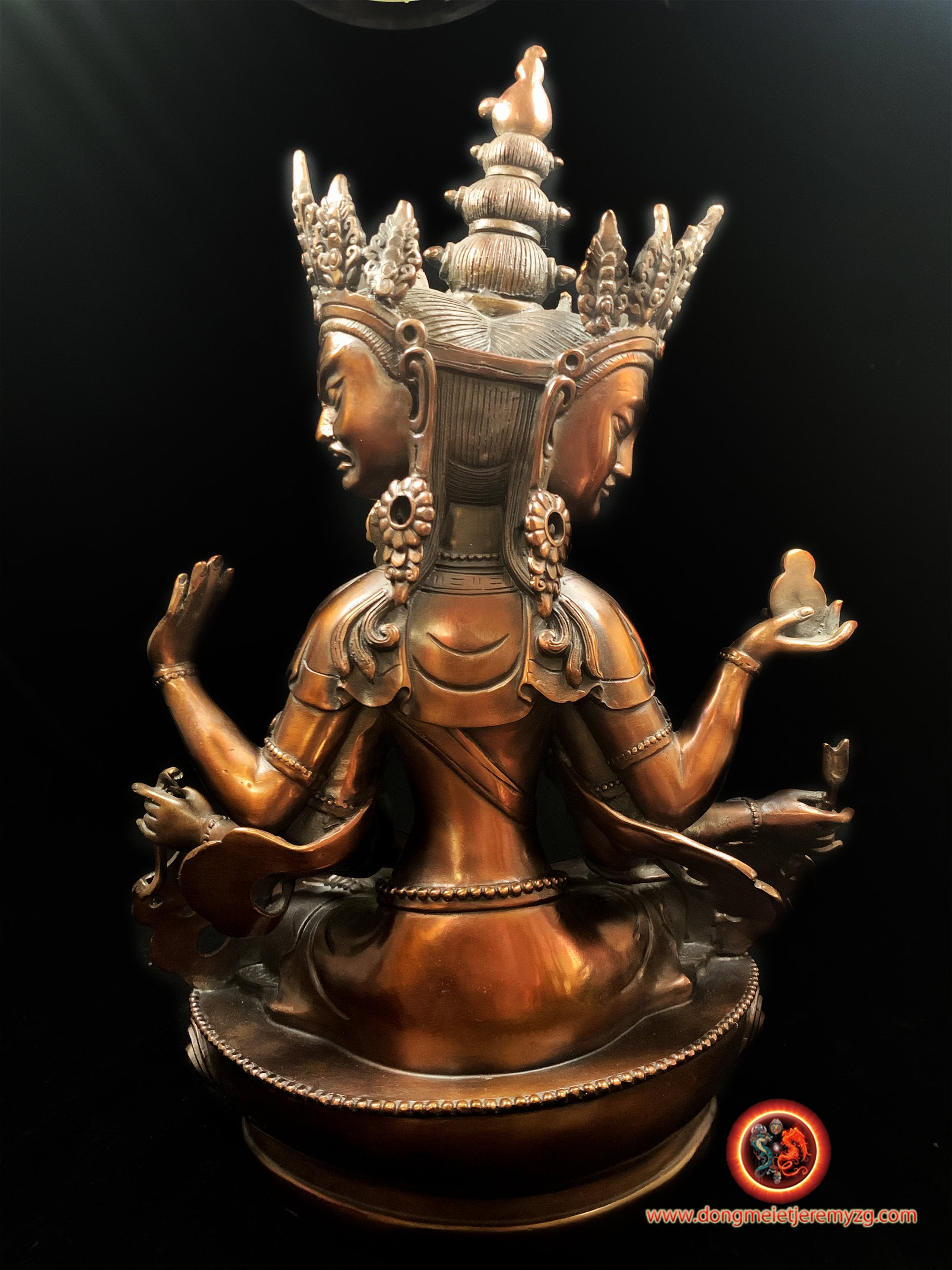 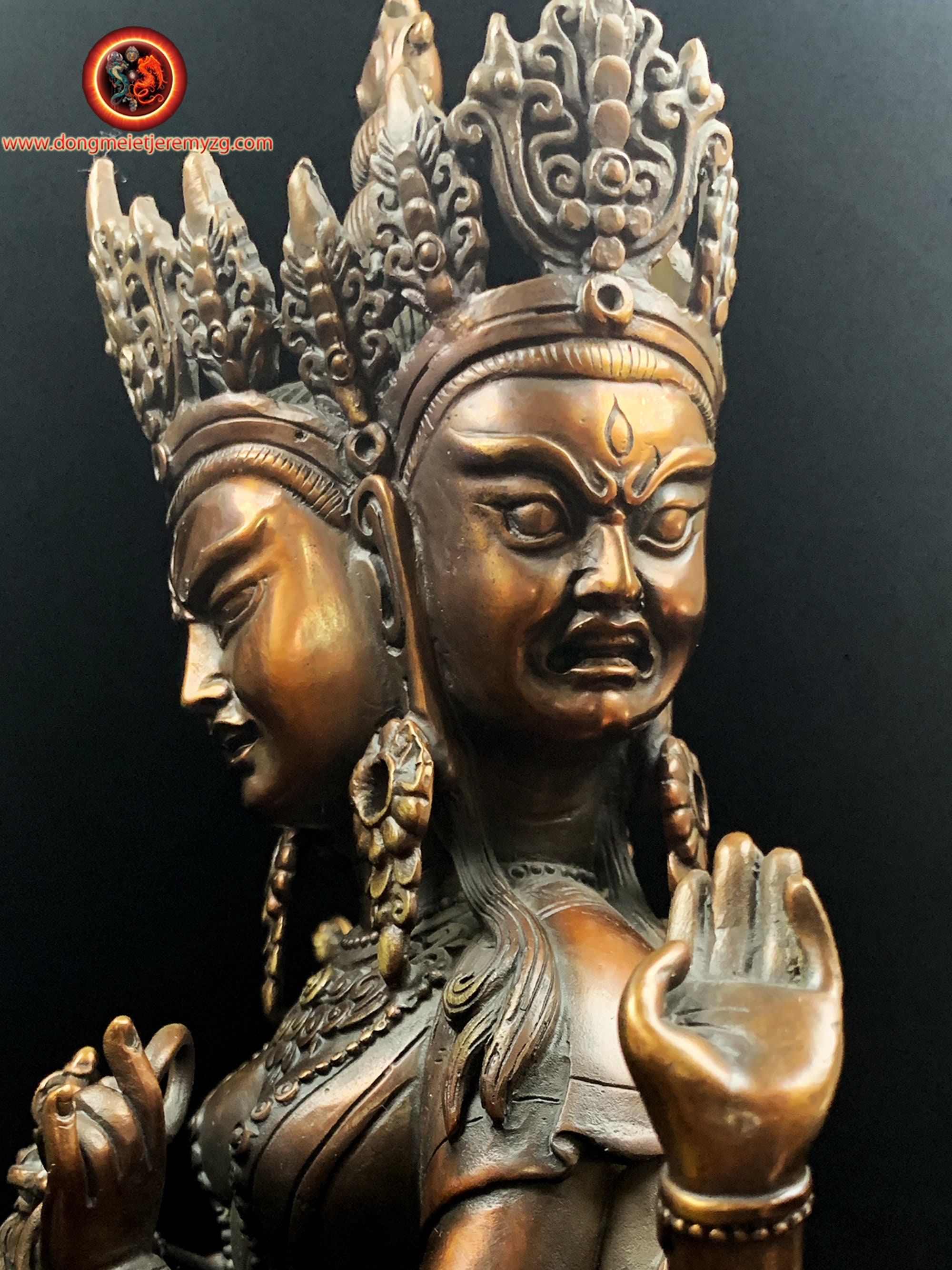 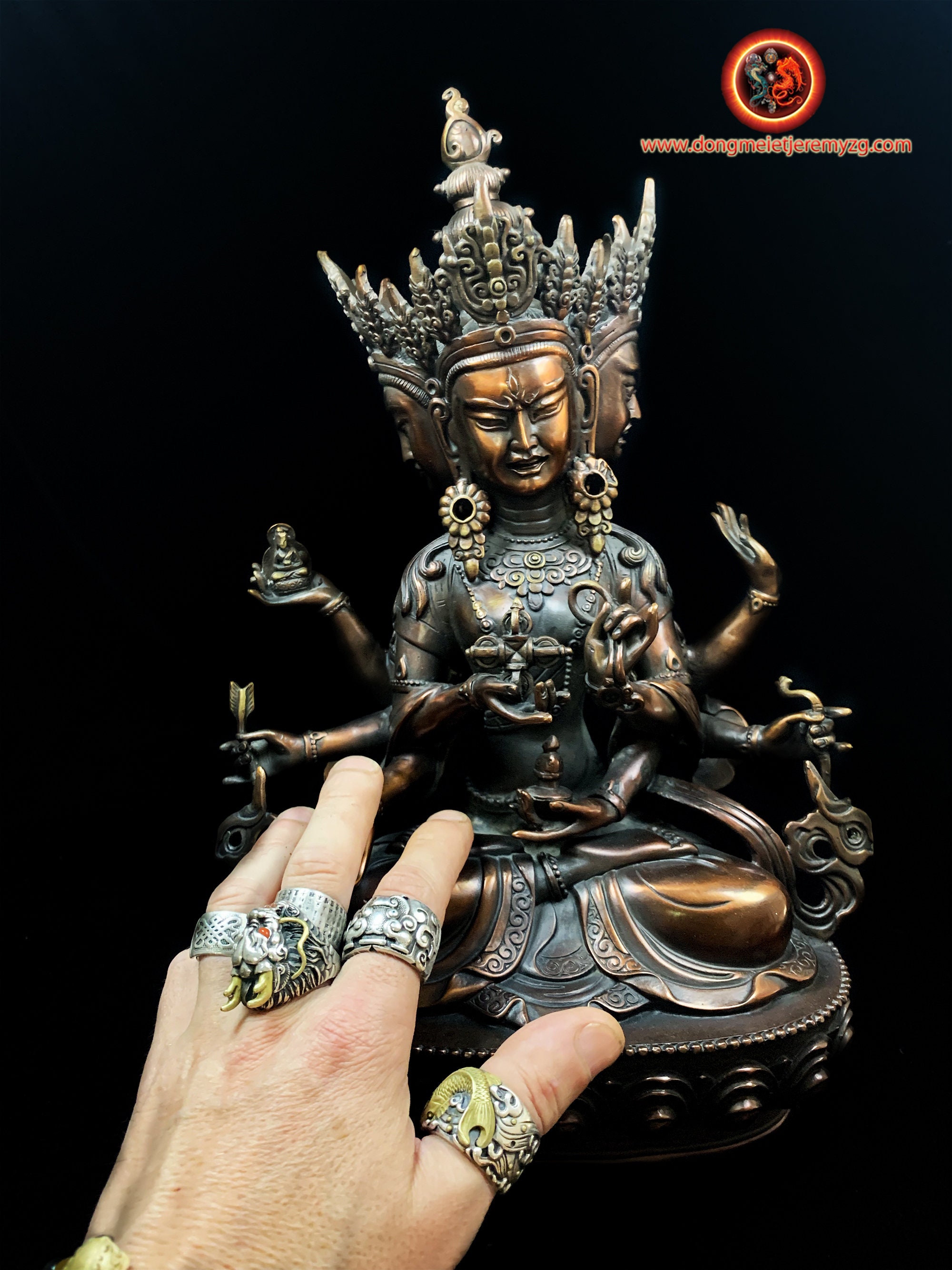 This statue was made by Tibetan tanners, specializing in the making of statues and ritual objects for Vajrayana Buddhist temples.
The pedestal is moving from below in order to put offerings in the statuette during the blessing like all true Buddhist statuettes

Video available via this link
https://youtu.be/Ez8i3RzKbIY

Ushnishavijaya (Tib. Tsugtor Nampar Gyalma) is the Buddhist goddess of long life and purification.
Its name means "Protuberance of the Victorious Crown" and it is linked to the oval at the top of the Buddha's head (Skt. Ushnisha) which symbolizes his achievement of enlightenment


The deity/long-lived, Ushnishavijaya, is one of the three long-lived deities along with The Buddha Amitabha and White Tara.
This group is known as the three long-lived deities (Tibetan: tse lha nam sum). There are other deities associated with long life and healing, but these three are commonly referred to as the main deities foramnt their own group.
All three were not formulated in India, but rather popularized as a Tibetan iconographic convention.

According to Buddhist ideas, death occurs as a result of the law of karma and ignorance as the root cause of negative actions. The Buddha's path offers the opportunity to achieve a spiritual realization in which one can be freed from the law of cause and effect and choose when and how to die, as well as the conditions under which to be reborn. This is the exact function of Ushnishavijaya: to help purify negative acts and illusions, to prevent premature death and as an ultimate goal, and to facilitate the realization of immortality.

According to Buddhist legends, the origin of the goddess is related to the residence of Shakyamuni Buddha in the sky of Trayatrimsa, where he went to see his mother Mayadevi and give Dharma teachings to the gods who live there. Concerned about the suffering of one of them, the Vedic god Indra asked Buddha to save him from suffering. In response to this, the Awakened radiated a light from the crown of his head, which turned into Ushnishavijaya and explained his practice.

The goddess embodies the notion of ushnisha as a sign of ultimate spiritual fulfillment and omniscience, which has the power to overcome death. Buddhists believe that through the realization of the practice of Ushnishavijaya, they will not be reborn in the lower realms of samsara and will reach the paradise of eternal bliss (Skt. Sukhavati, Tib. Dewachen ).

The iconographic form of Ushnishavijaya has been preserved in Tibet at different historical periods. The white color of his body symbolizes the radiant brilliance of the crown of Buddha's head. She has three faces (white, yellow and blue) with different expressions showing the ability of the goddess to manifest herself in different aspects, according to the needs of sentient beings. Each face has three very large eyes. She is depicted with eight hands. His right hands hold a crossed vajra - a symbol of the indestructible power of enlightenment, the Buddha figure (Shakyamuni or Amitabha) - a sign of his power to guide beings to Buddhist paradise, and an arrow piercing the obstacles caused by the Lord of Death. The fourth right hand is in the gesture of generosity (Skt. Varda mudra). In her left hand, she holds a bow, a lasso, with which she attracts everything that threatens life, and a jar of nectar of immortality (Skt. Amrita kalasha ). The fourth left hand is in the fearless gesture (Skt. Abhaya mudra ). The goddess sits in a lotus posture (Skt. Padmasana) and sometimes she is depicted in a stupa that symbolizes the ushnisha and enlightened spirit of Buddha.

In the Tibetan tradition, there are images of the goddess in union with her wife, Uhnishchakravartin (Tib. Tsugtor Khorlo Gyurwei Gyalpo), whose name means "the universal monarch of ushnisha".

Ushnishavijaya has an important role in Mahayana and Vajrayana Buddhism. Its popularity is linked to beliefs in the supernatural power of the radiation emanating from the Buddha's crown as well as its victory over death.