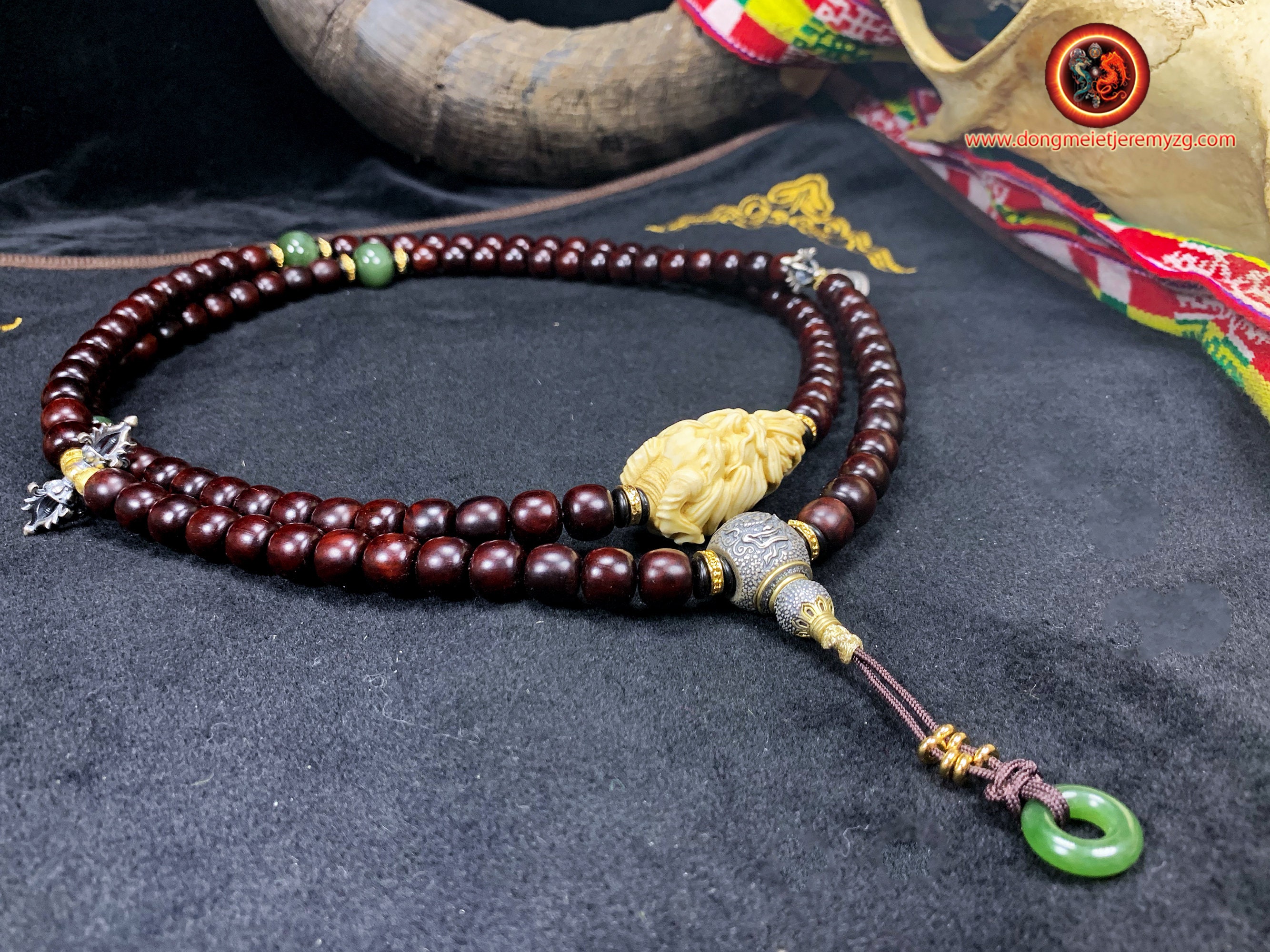 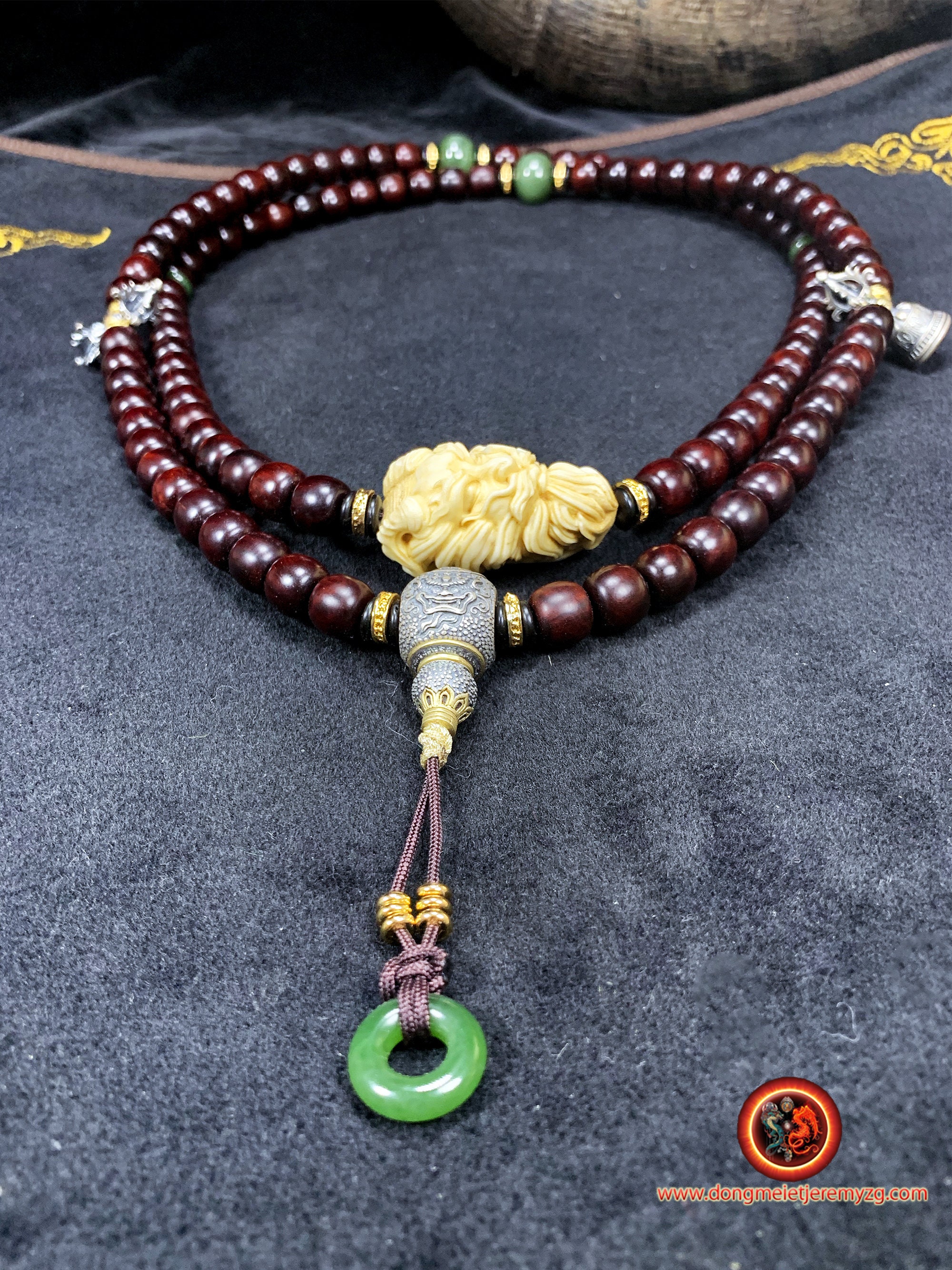 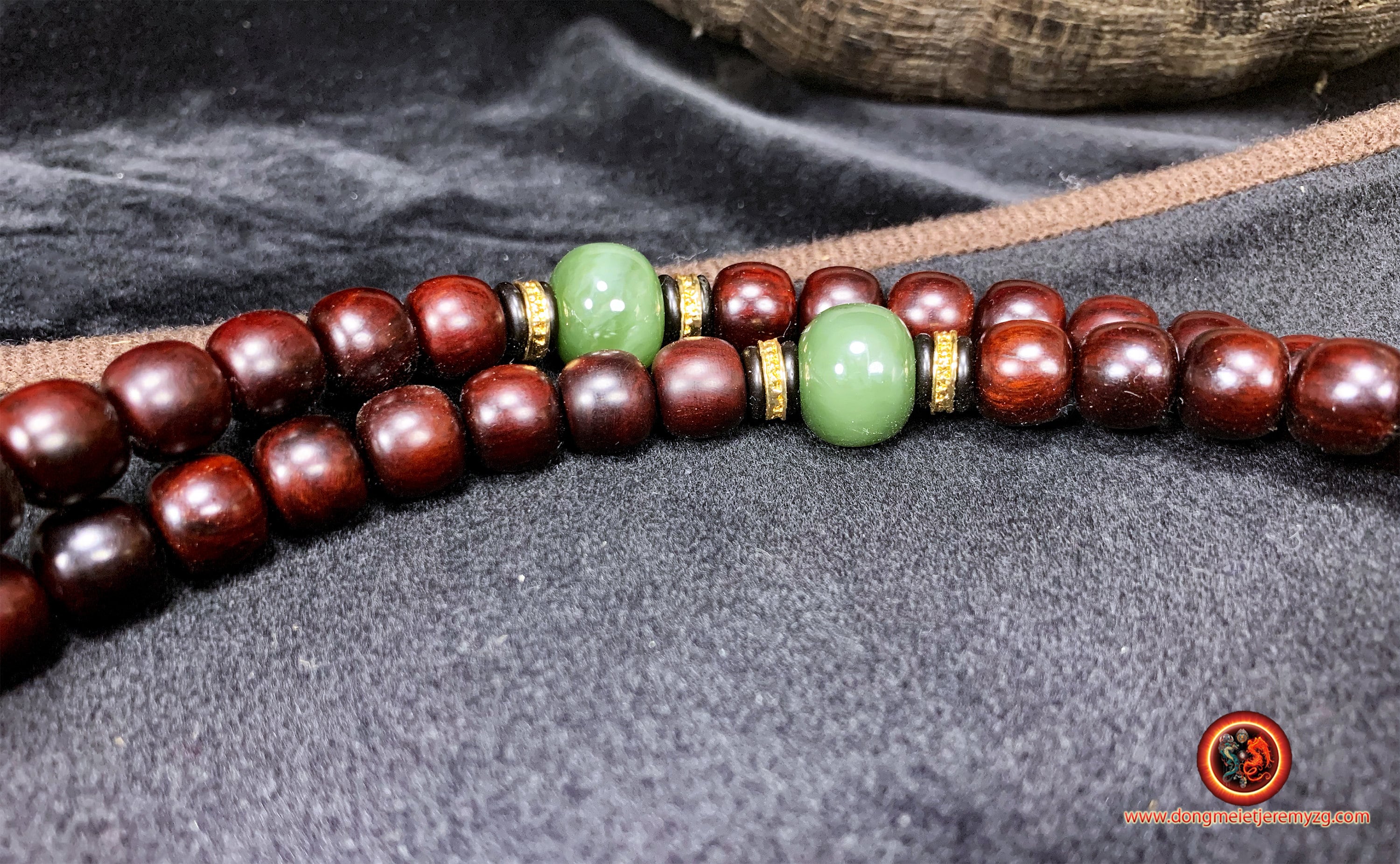 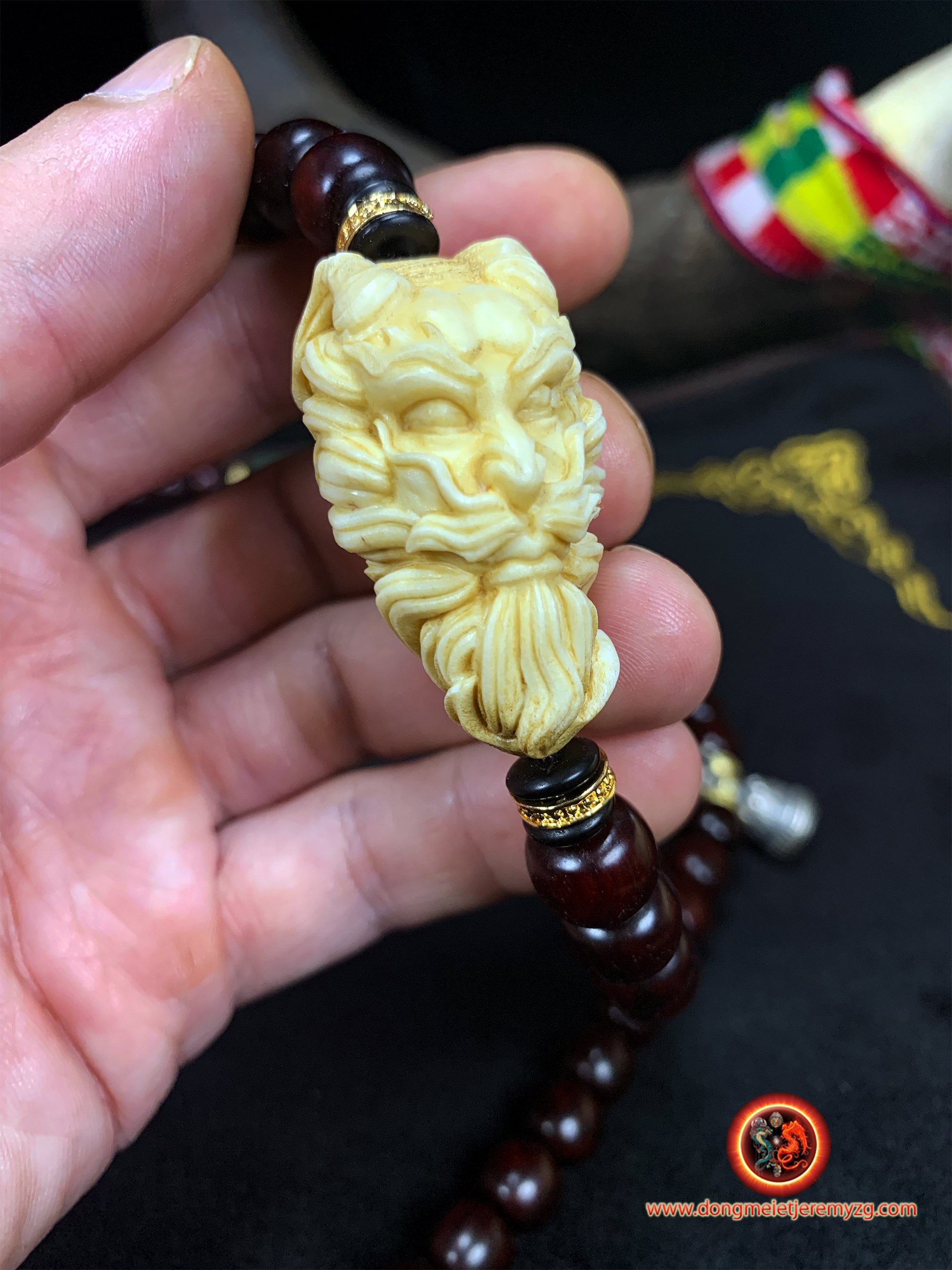 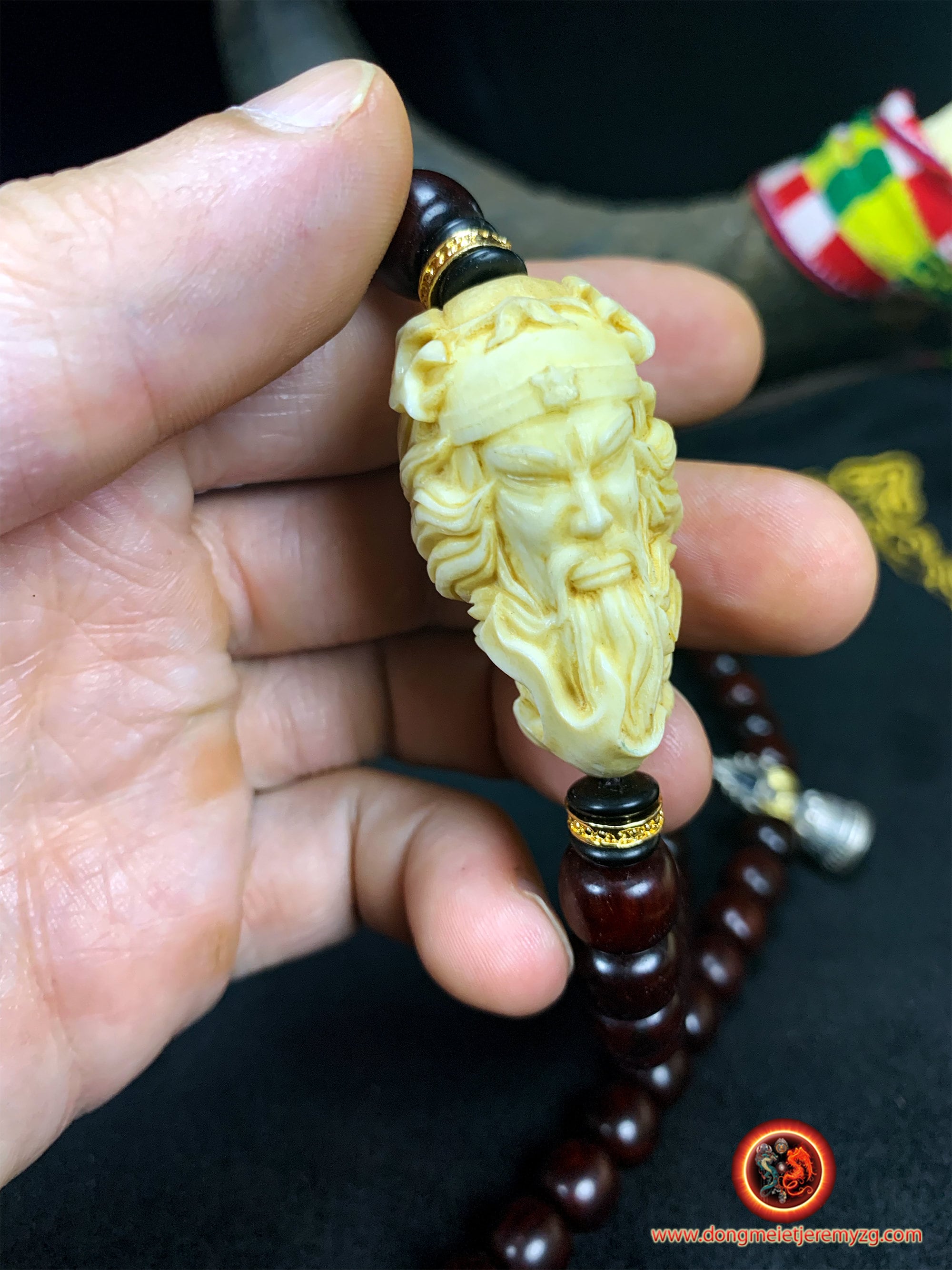 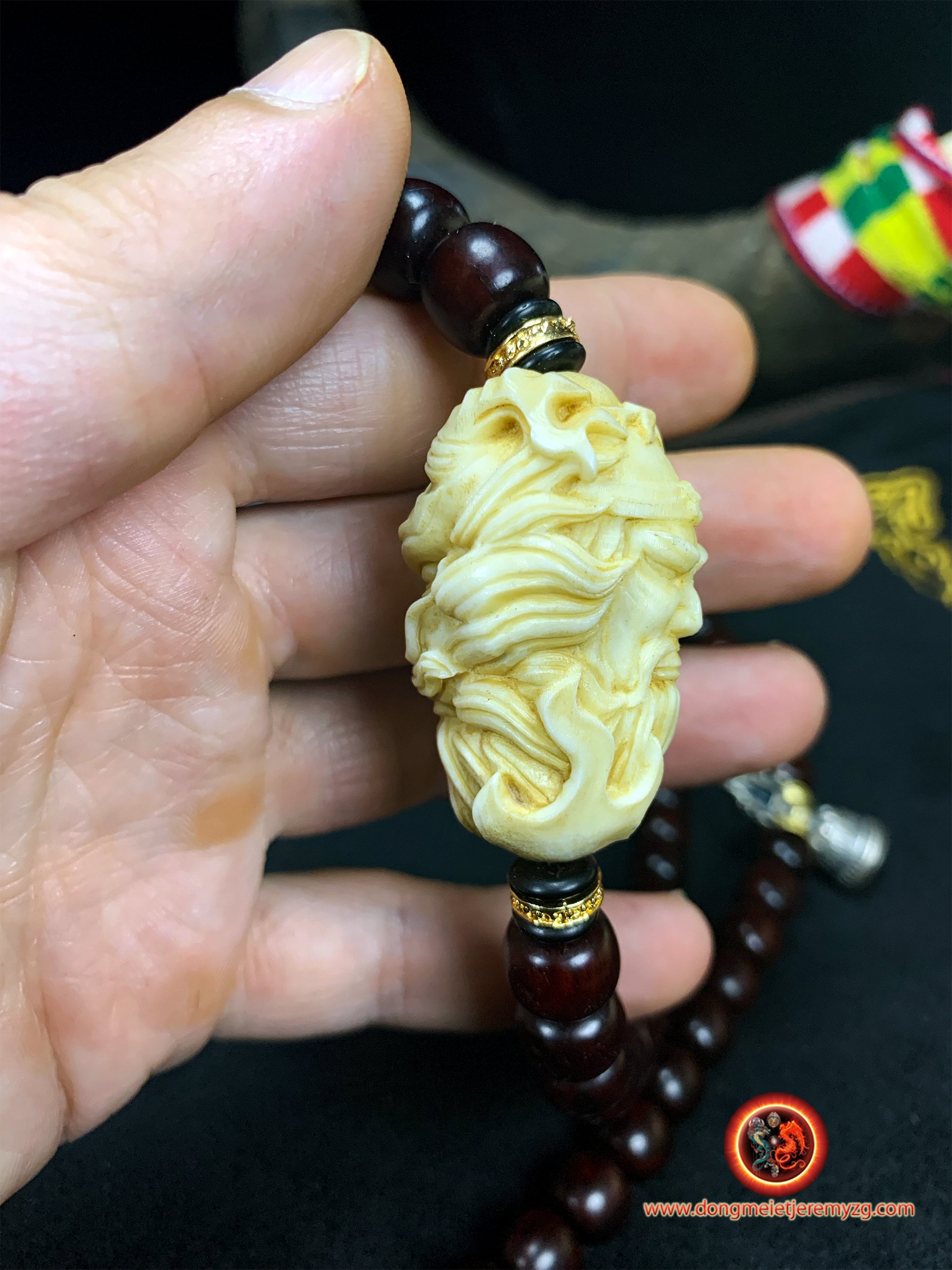 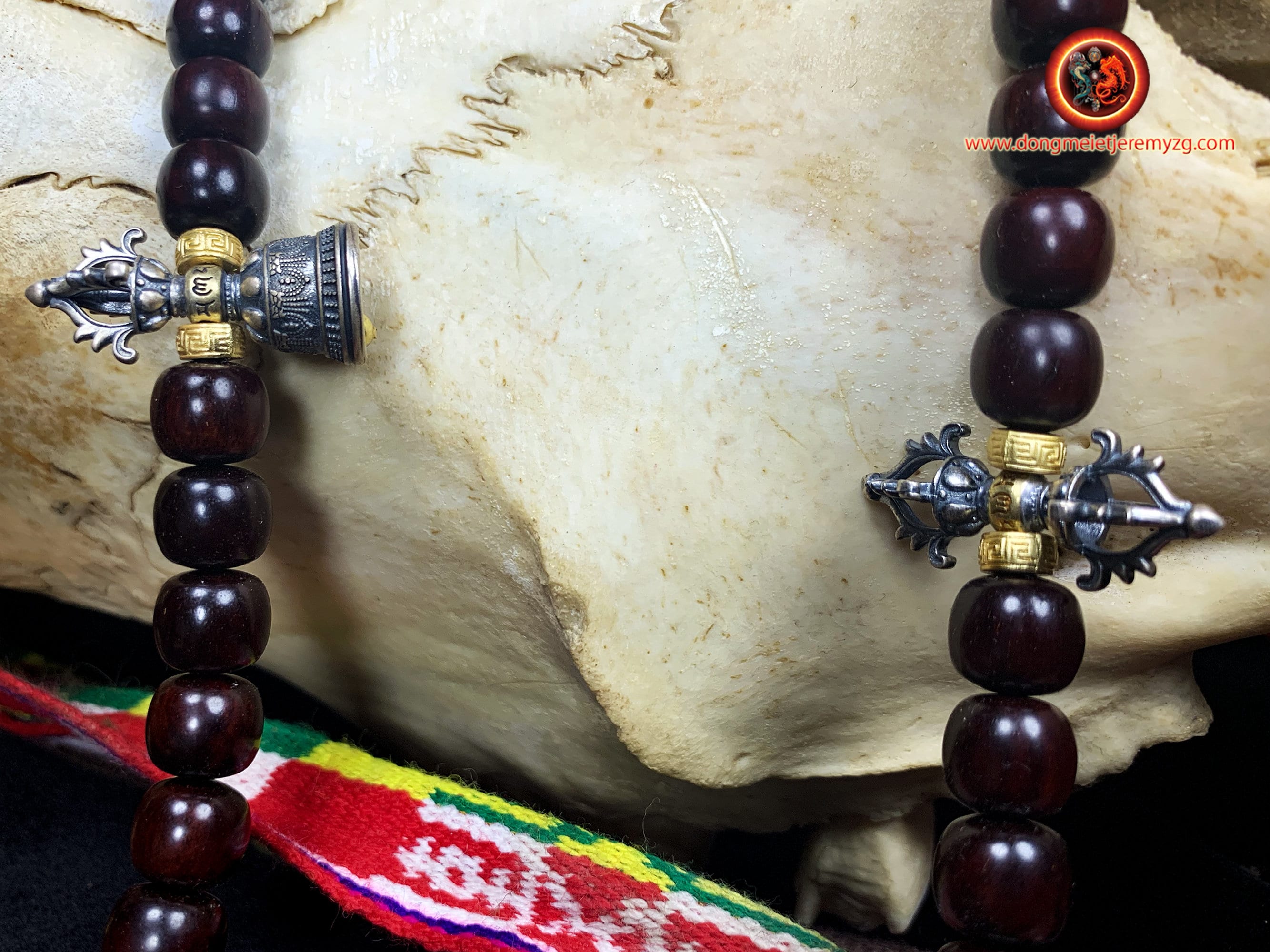 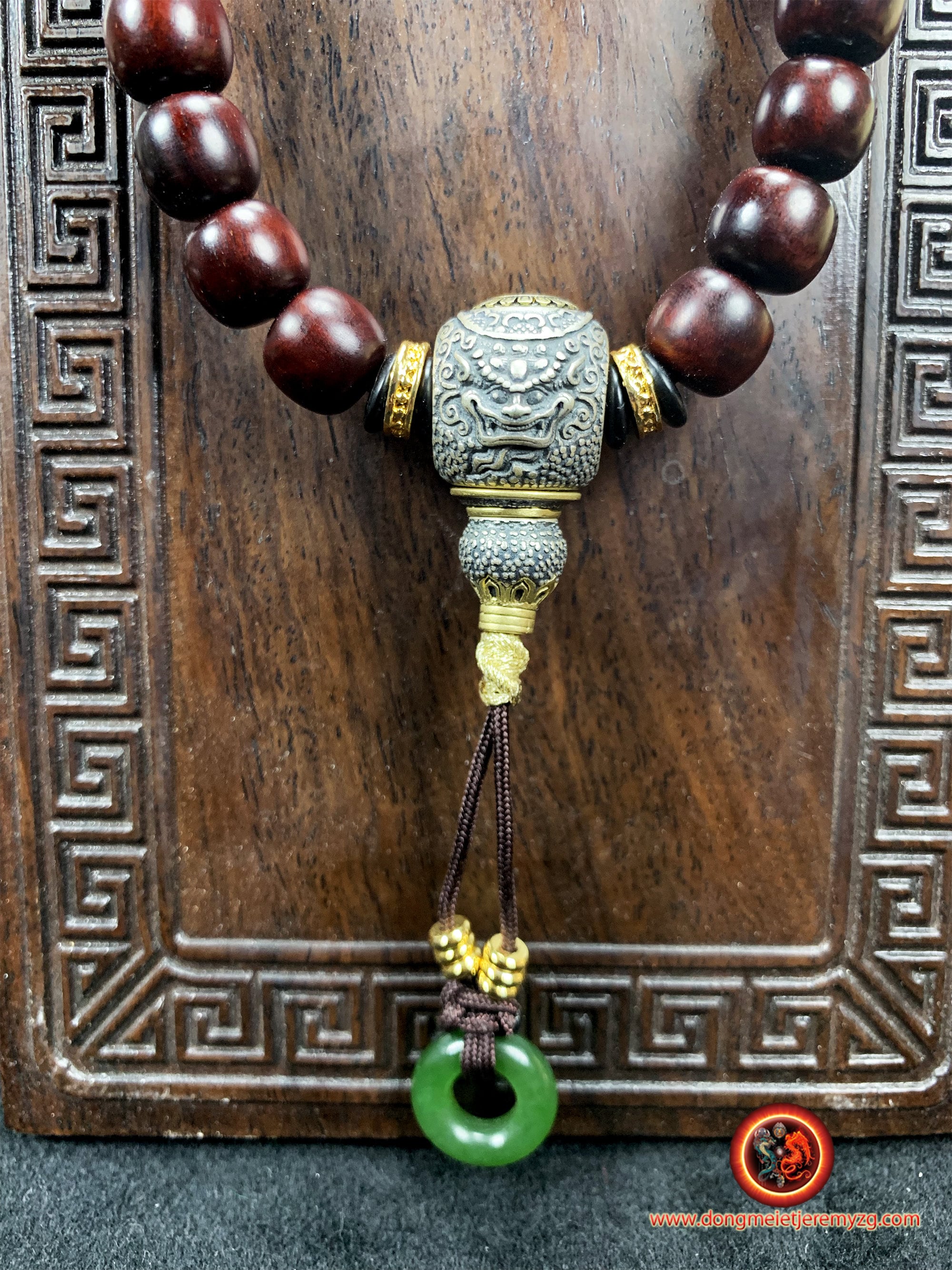 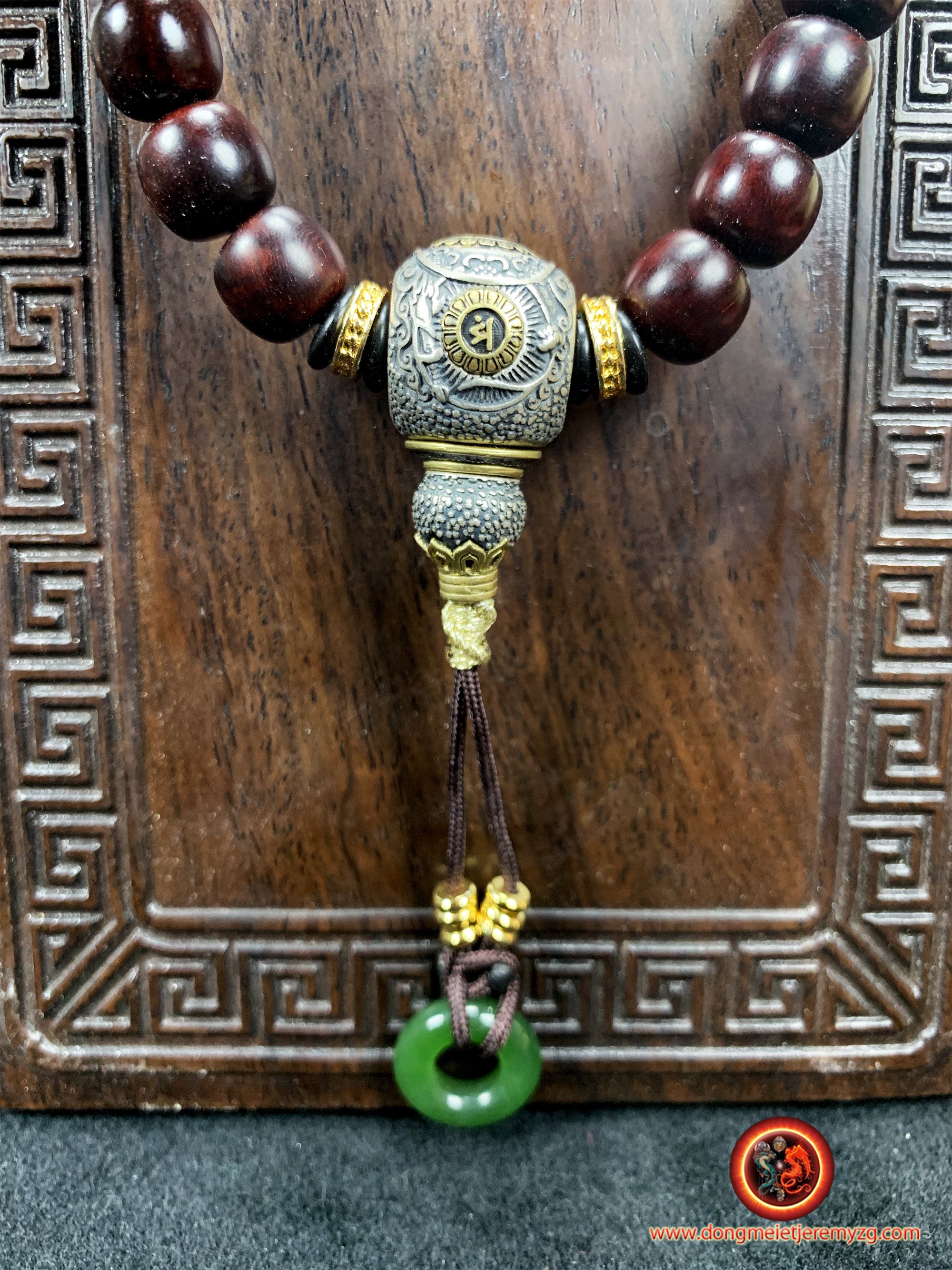 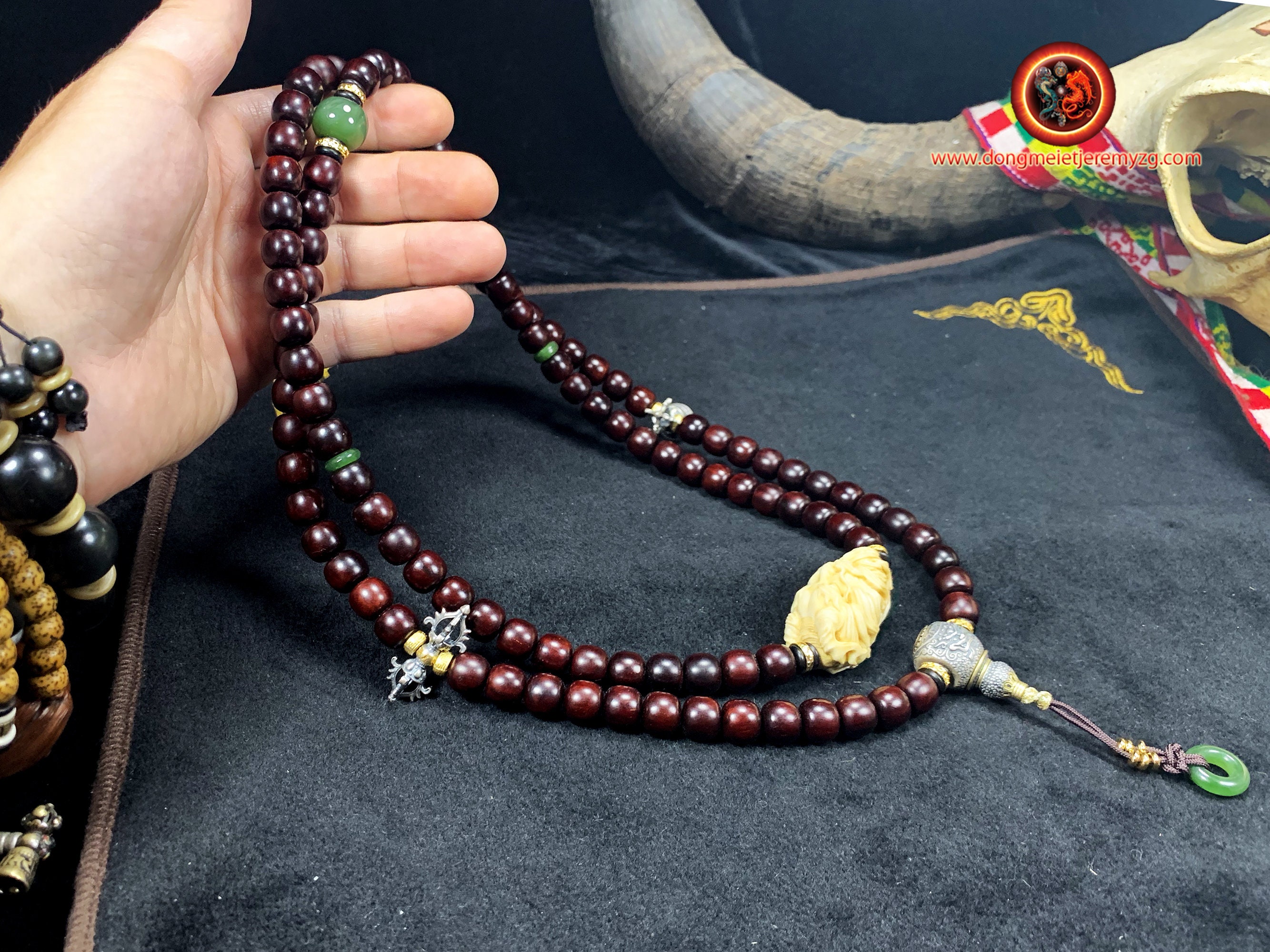 Like all traditional malas, this piece is finished with a sliding knot below the final pearl (called Guru's pearl or Buddha's head) to loosen the mala for practice and tighten it once the exercise is over as shown in this video via this link
https://www.youtube.com/watch?v=3Wz4YaGJoLI

Preparation time after order, between 7 to 10 days

This mala is composed of 108 red sandalwood pearls, a rare collection quality from India.
much rarer than white sandalwood has no characteristic smell and is part of the very precious woods.
In Buddhism, sandalwood is one of the Padma (lotus) and corresponds to Amitabha Buddha, moreover the element of this Buddha is fire and its color, red. Sandalwood is considered capable of transforming desires and retaining the attention of a person practicing meditation.
Sandalwood is one of the main constituents of incense made in China, Taiwan, Japan, Vietnam, Korea, and is intended to be lit in temples or during worship. It is also widely used in India for these same applications.

Dimension of each pearl: 12mm by 11mm

Netsuke in deer antler representing a dragon and the protector Zhong Kui on each of the faces.
handcrafted in deer horn.
Dimensions 43mm/ 28mm/ 29mm.
Rare piece, Fine and delicate work.

A netsuke is a miniature sculpture, originating in 17th century Japan. Initially a button closure simply carved on the cords of an inro box, netsuke later developed into richly carved handicrafts.
Traditionally, Japanese clothing - the kosode and its later evolution, the kimono - had no pockets. Although the sleeves of the kimono could be used to store small items, the men who wore the kimono needed a larger and stronger container in which to store their personal belongings, such as pipes, tobacco, money and seals, which resulted in the development of containers known as sagemono, which were suspended by cords from the belts of the robes (obi).

Today, netsuke production continues and some modern netsuke can reach high prices in the UK, Europe, US, Japan and elsewhere.

The existence of demons and monsters is often crucial to a religious system. These creepy Buddhist monsters don't just exist to scare you – they symbolize the vile and perverse aspects of human nature. Buddhists believe that every human being possesses Buddha nature and can attain enlightenment, but also that humans are inherently predisposed to give in to their lowest desires, such as greed, ego, lust and anger. The frightening demons of Buddhism usually embody impure thoughts and desires that lead to negative behavior, although some are simply frightening reminders to do only good things.

Many supernatural creatures populate Buddhist literature, but among these, Mara is unique. He is one of the first non-human beings to appear in Buddhist scriptures. He is a demon, sometimes called the Lord of Death, who plays a role in many stories of the Buddha and his monks.

Video available through this link
https://youtu.be/Hmknvvdf9q4