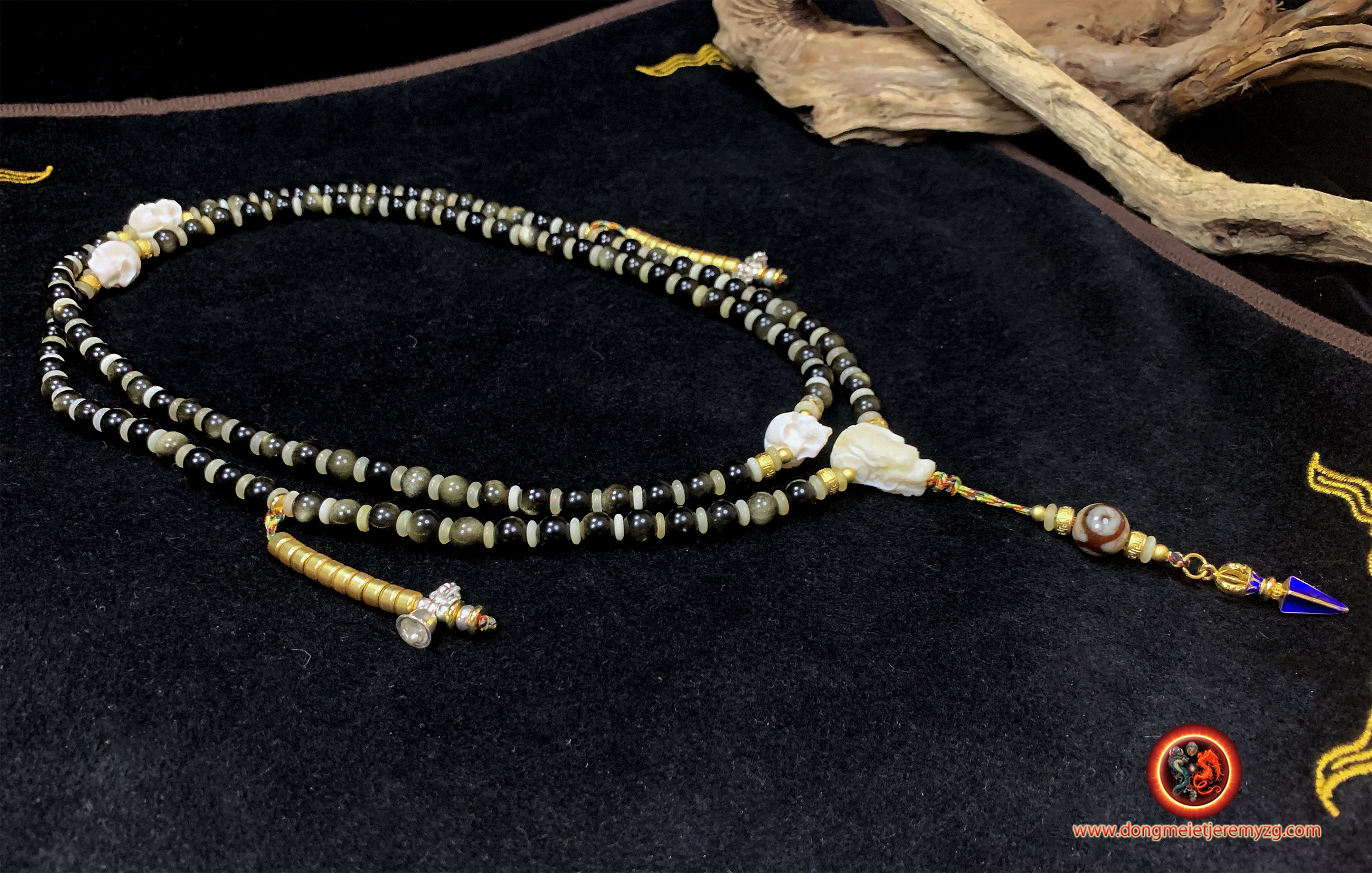 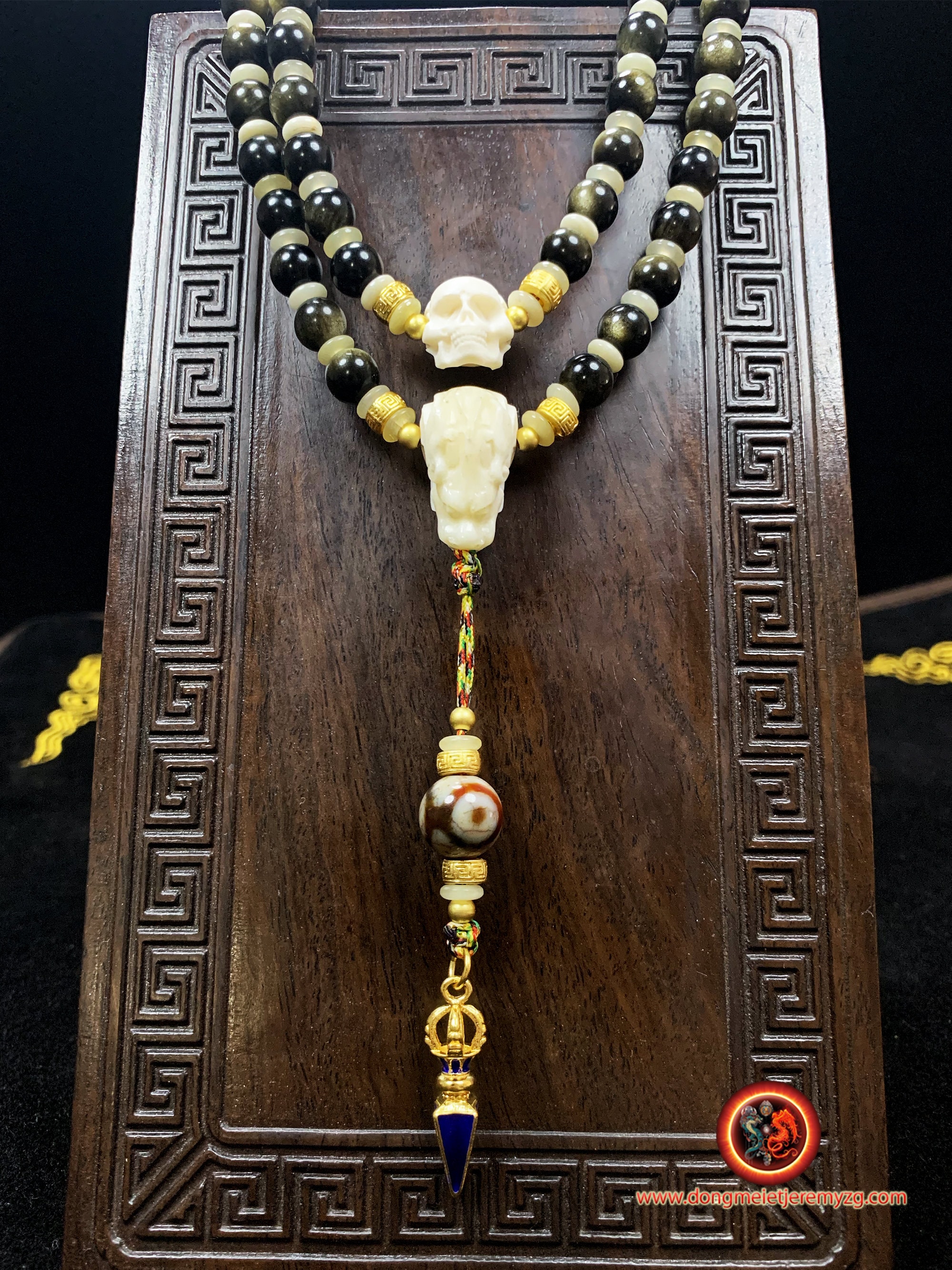 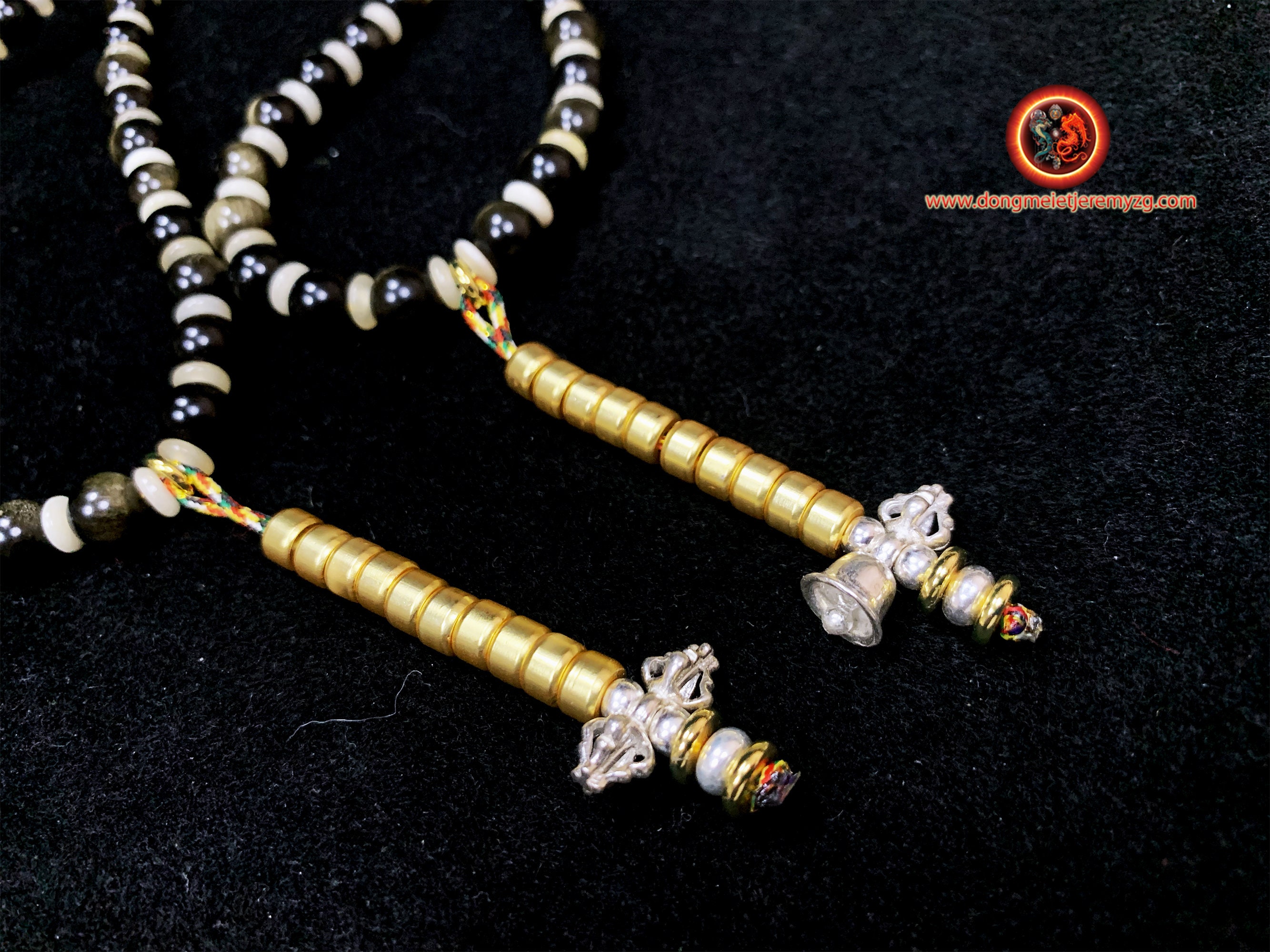 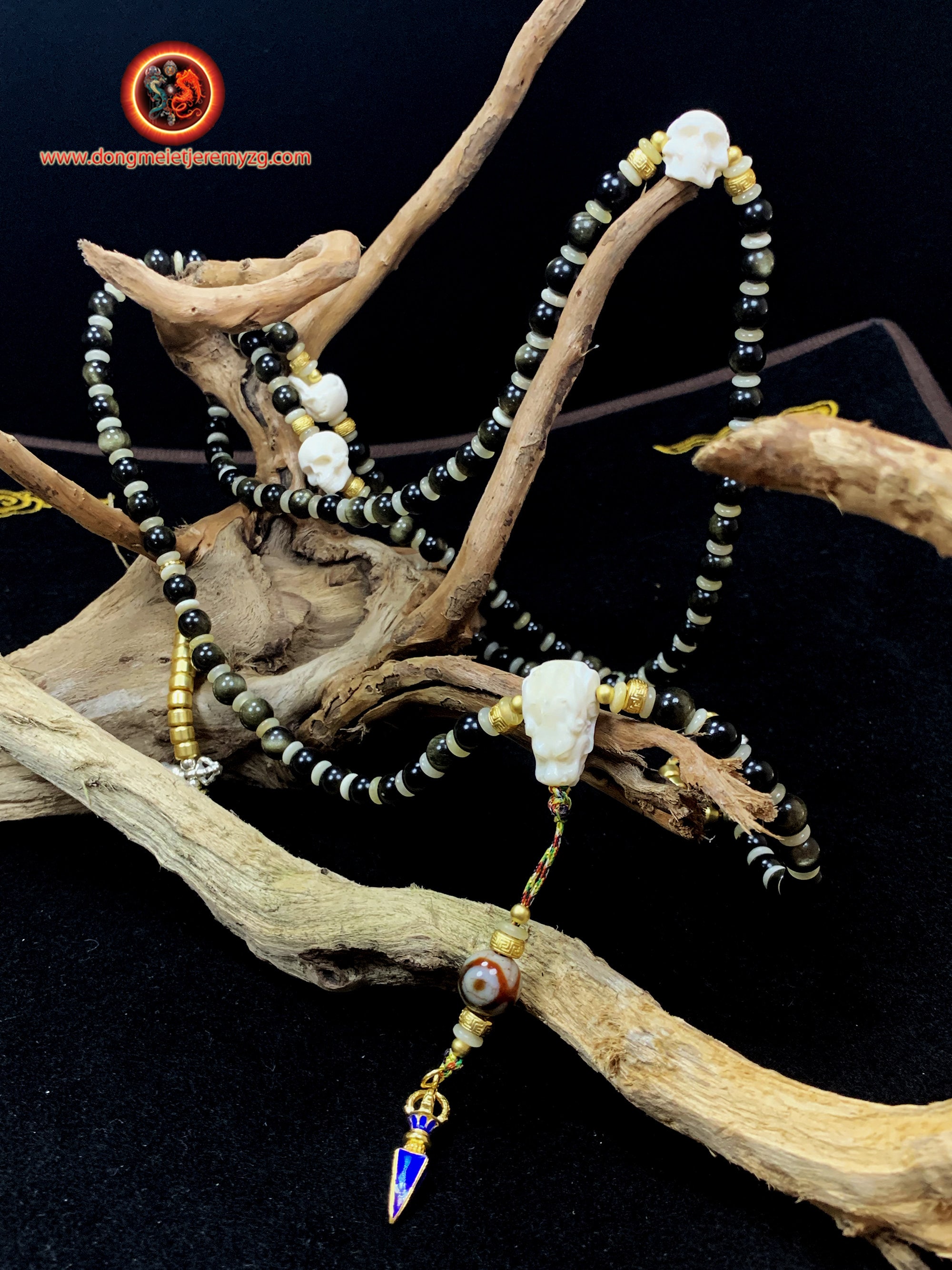 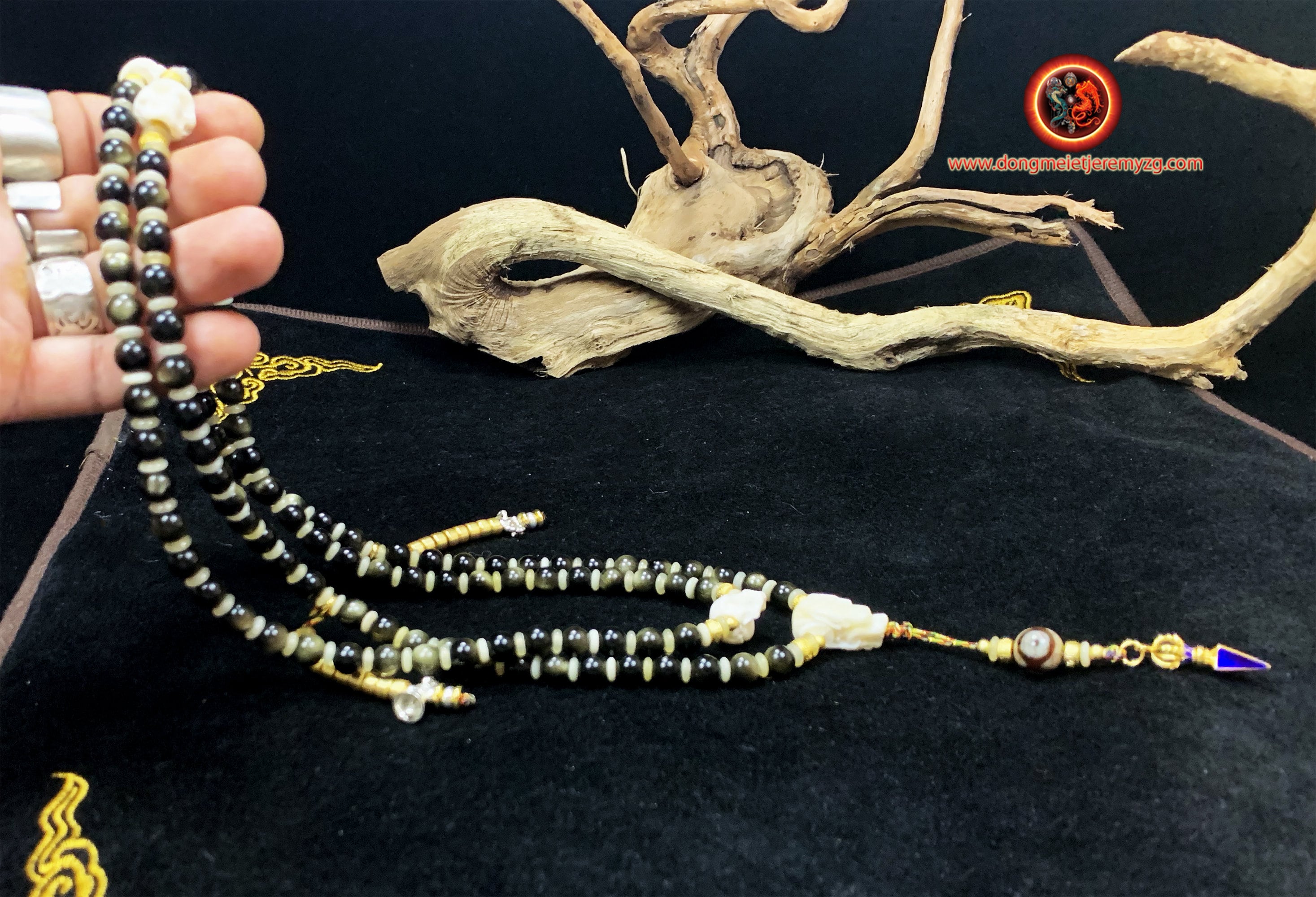 Like all traditional malas, this piece is finished with a sliding knot below the final pearl (called Guru's pearl or Buddha's head) to loosen the mala for practice and tighten it once the exercise is over as shown in this video via this link
https://www.youtube.com/watch?v=3Wz4YaGJoLI

Mala consists of 108 golden obsidian pearls from Mexico and of high quality.
diameter of each pearl of 8mm.
A buffalo bone spacer is located between each pearl.

We also placed in counterperles and finishing pearl (also called Guru's pearl or Buddha's head) a bone dragon head and three skulls also made of buffalo bone
The skull representing knowledge, and the dragon the protector of knowledge.
In Asia, we find the symbolism of the skull in Buddhism and Hinduism through their religious art. Indeed the representation of the lord of death among Buddhists, named Yama, has five skulls around his head, like a crown that indicates a victory over five defects: hatred, greed, pride, envy and ignorance. On the other hand in the Hindu religion Kali the goddess of death is adorned with a necklace of skulls.

In the finish is a real Tibetan sacred agate, called DZI and a phurba in 24k gold plated silver.

this DZI is a three-eyed DZI, it represents the three stars of luck, happiness, honor and longevity. This is the manifesto of the Hindu god of wealth, the Kubera. This 3-eyed pearl creates the favorable conditions to enjoy fortune, happiness and prosperity.

Side counters in 24k gold plated copper and 925 silver.