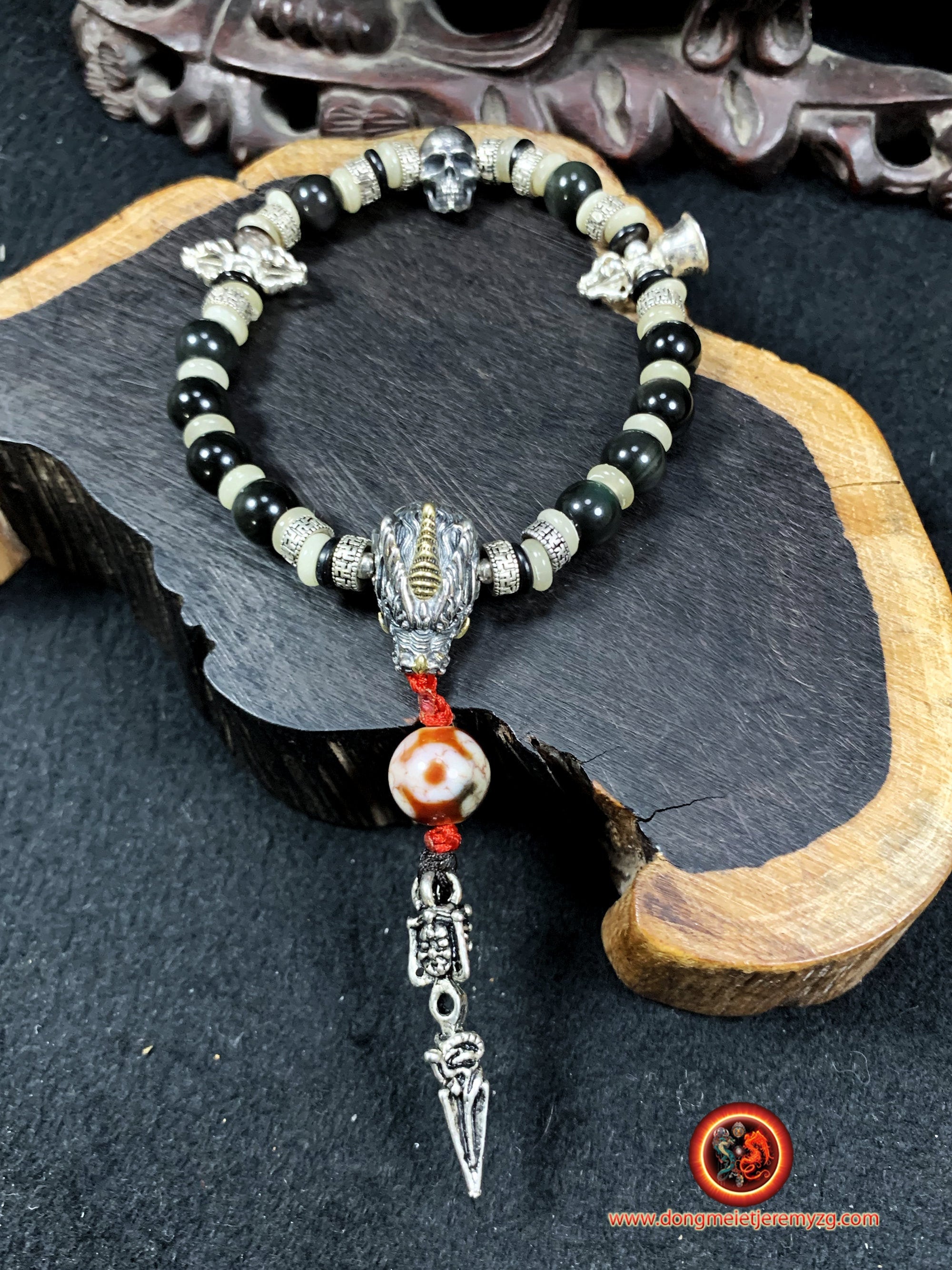 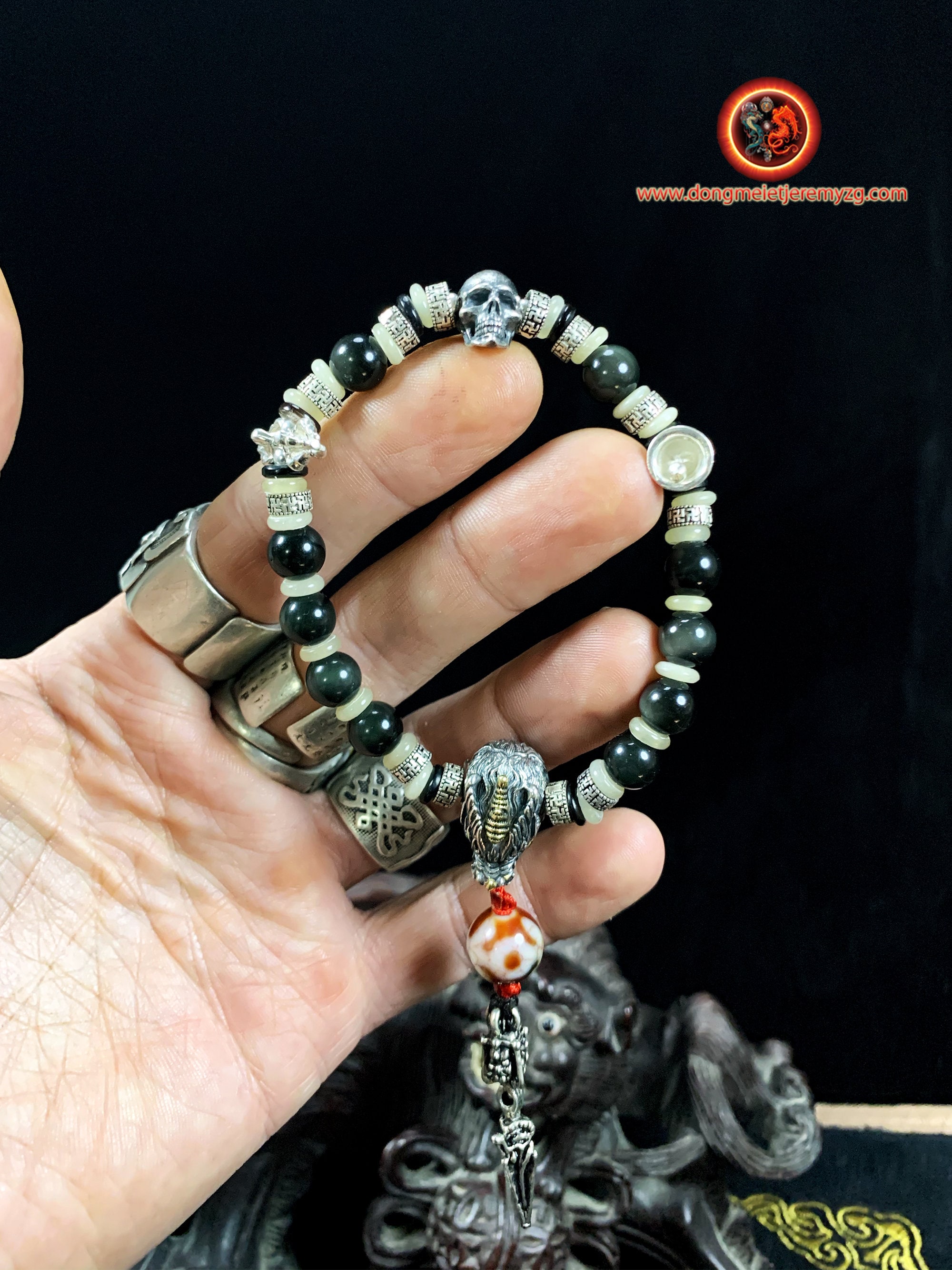 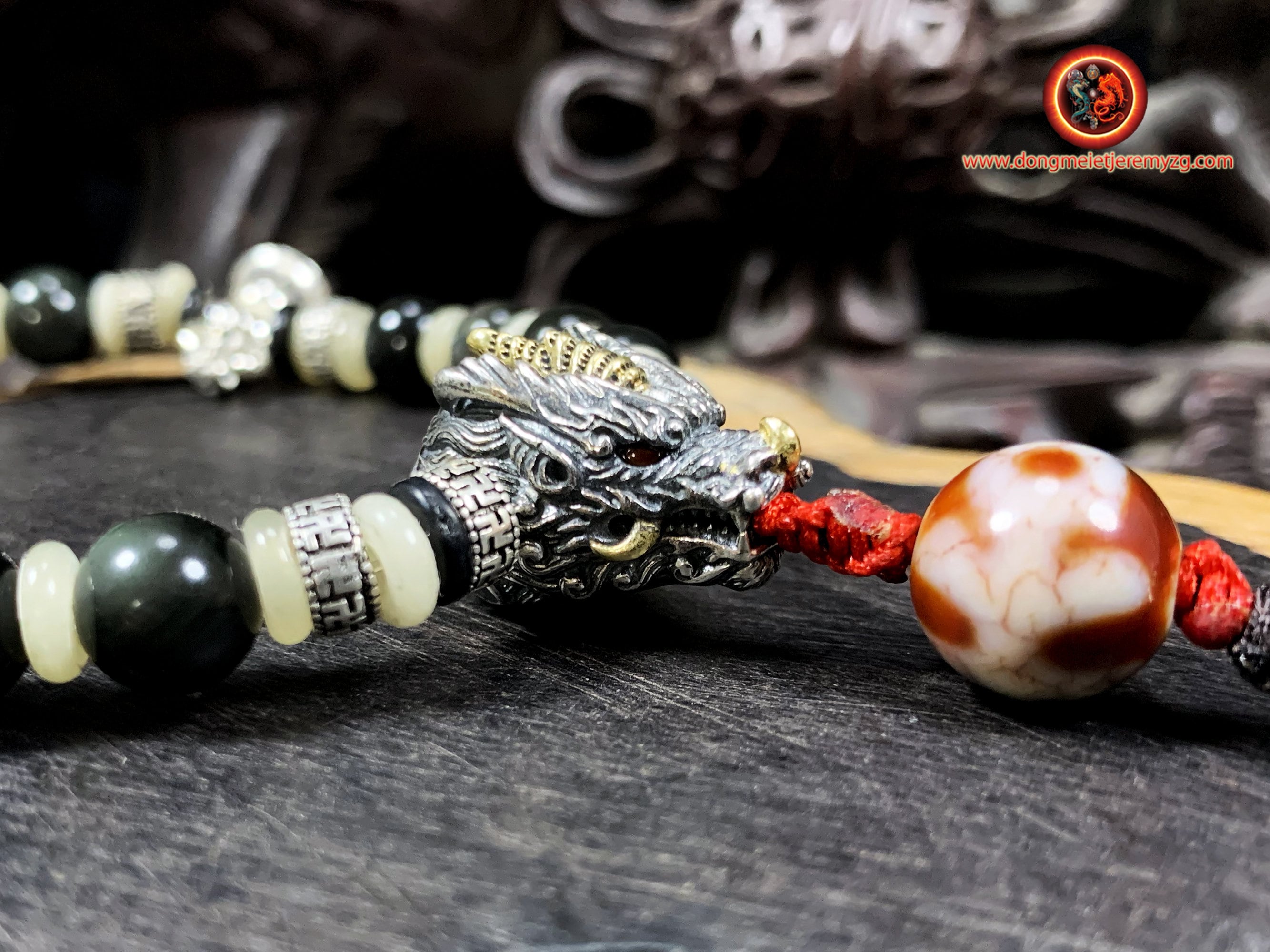 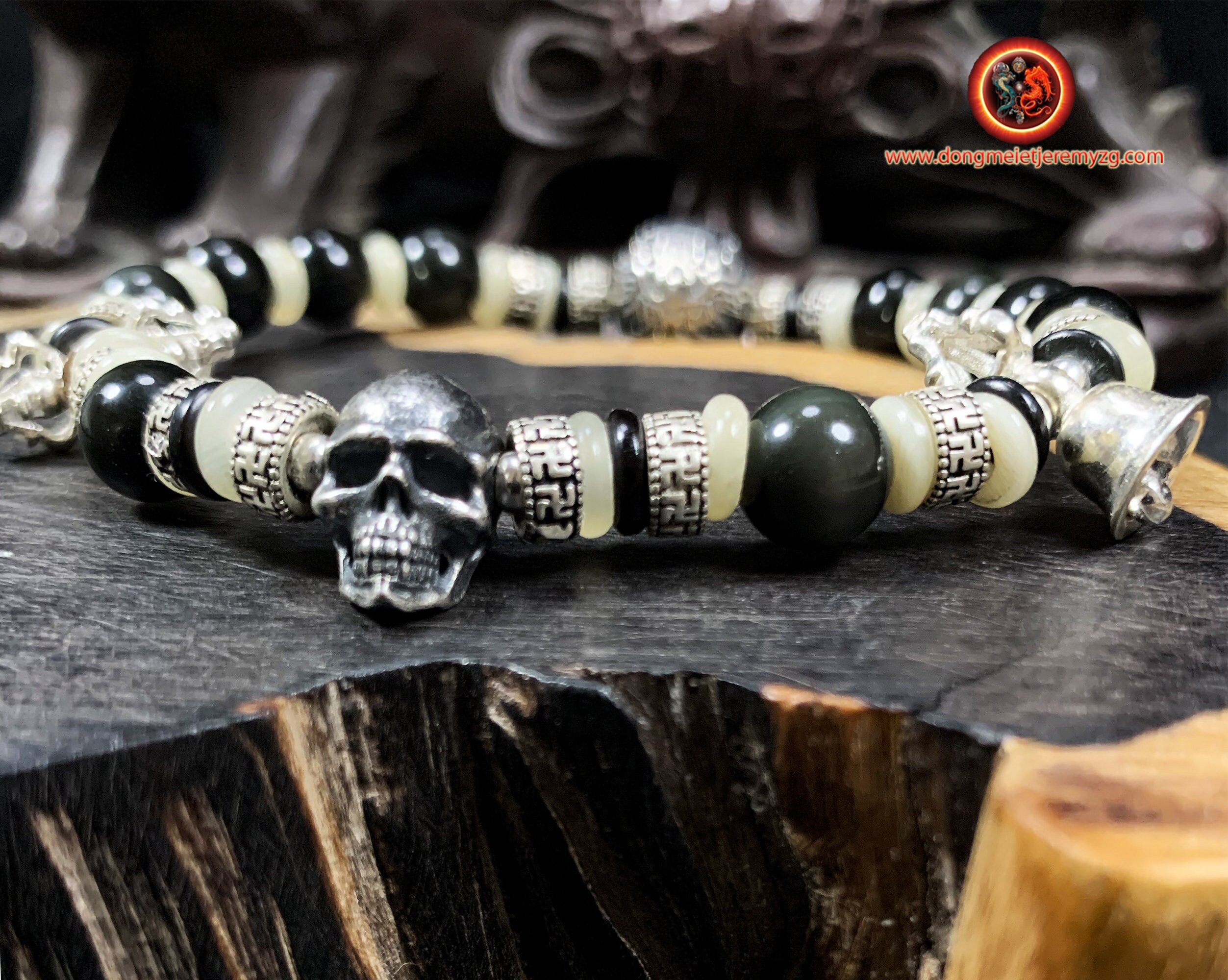 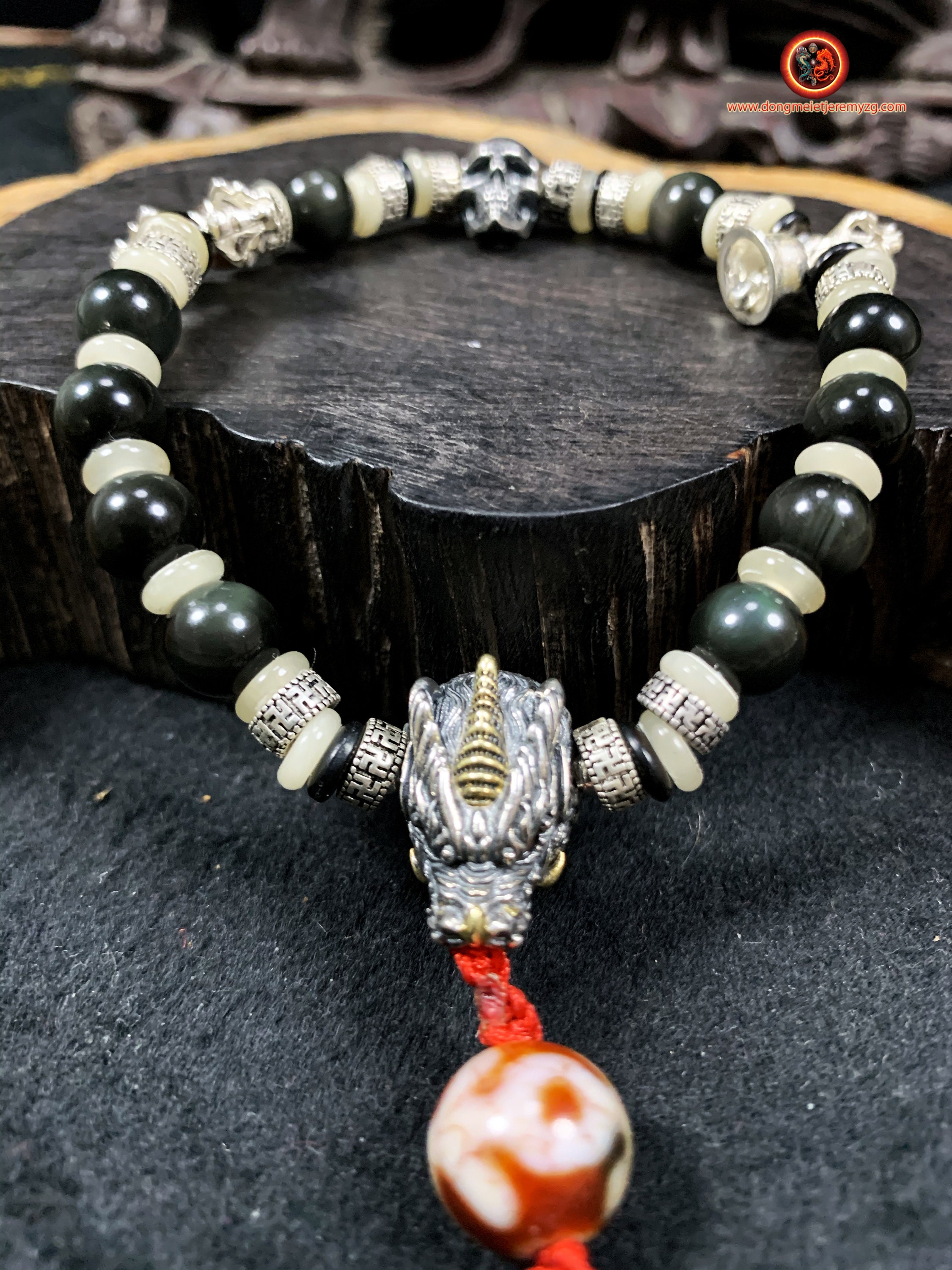 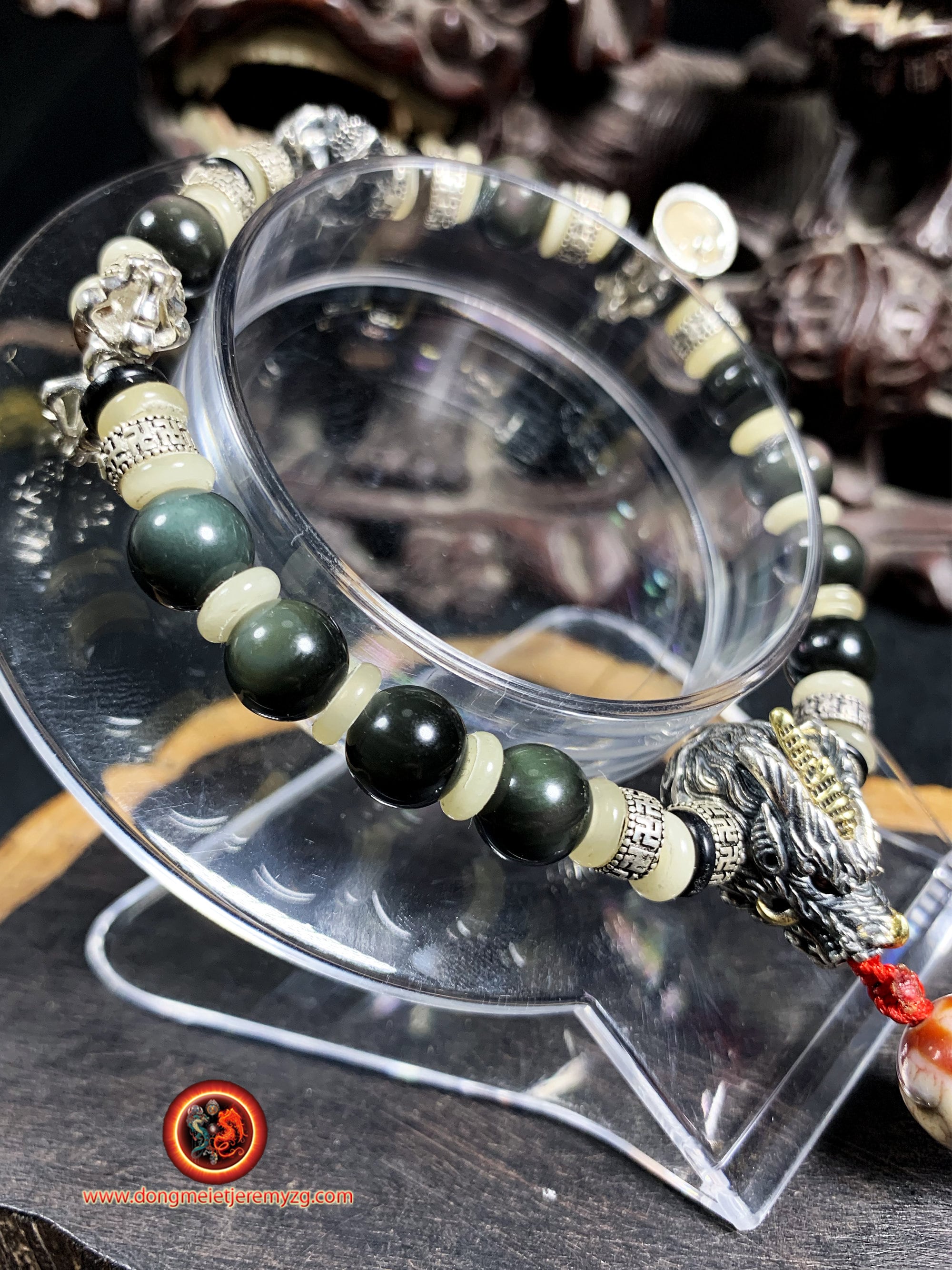 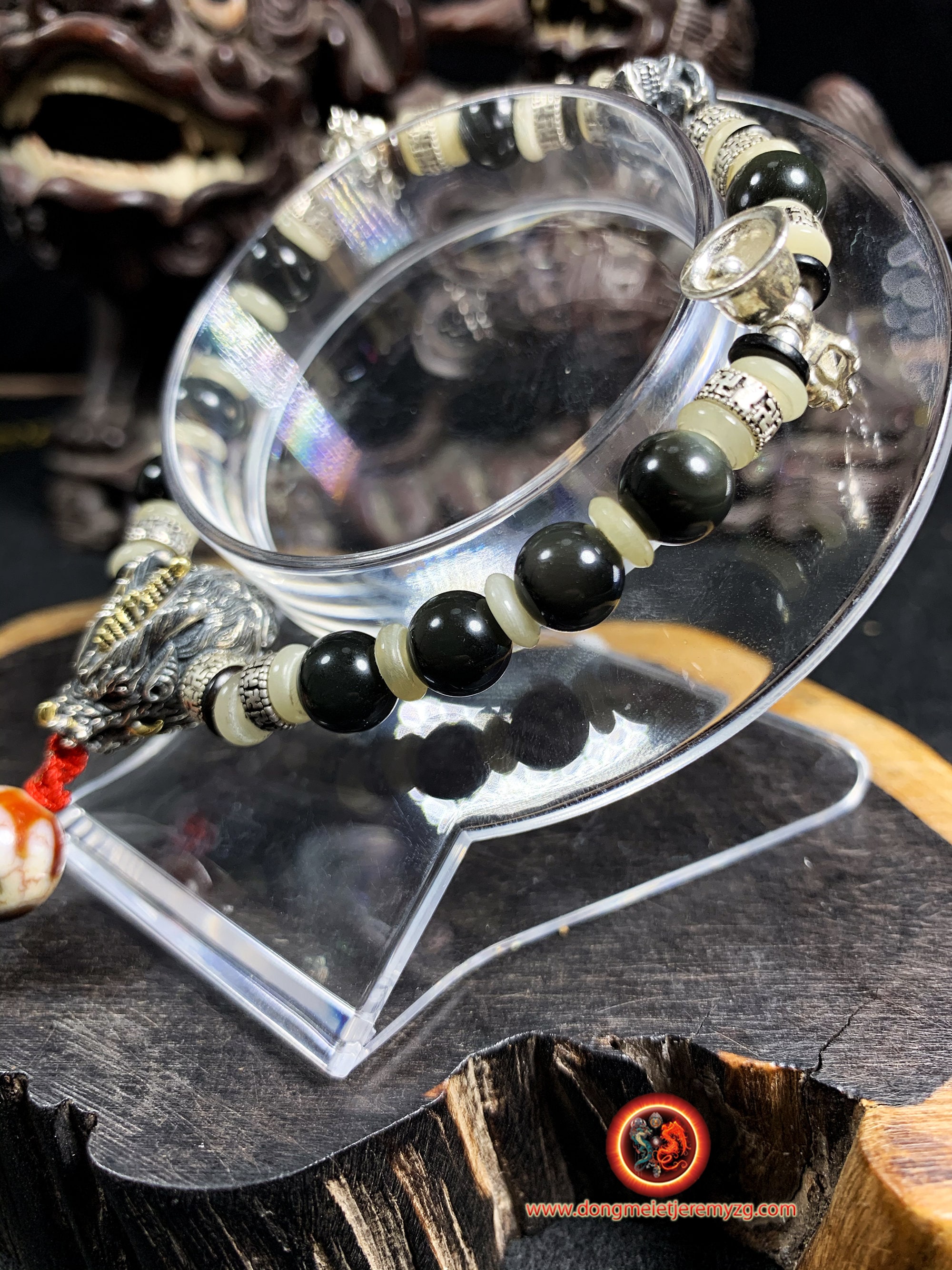 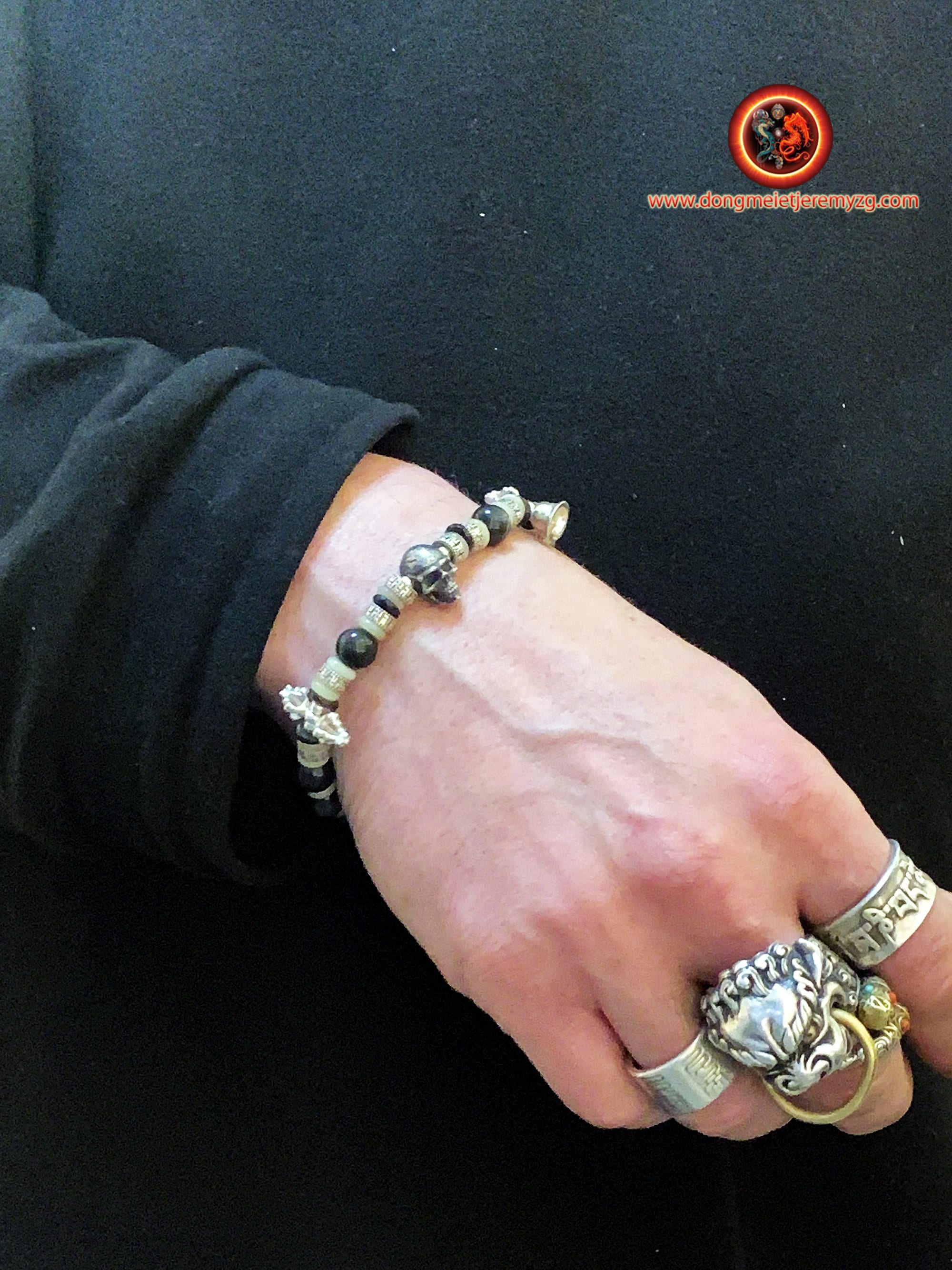 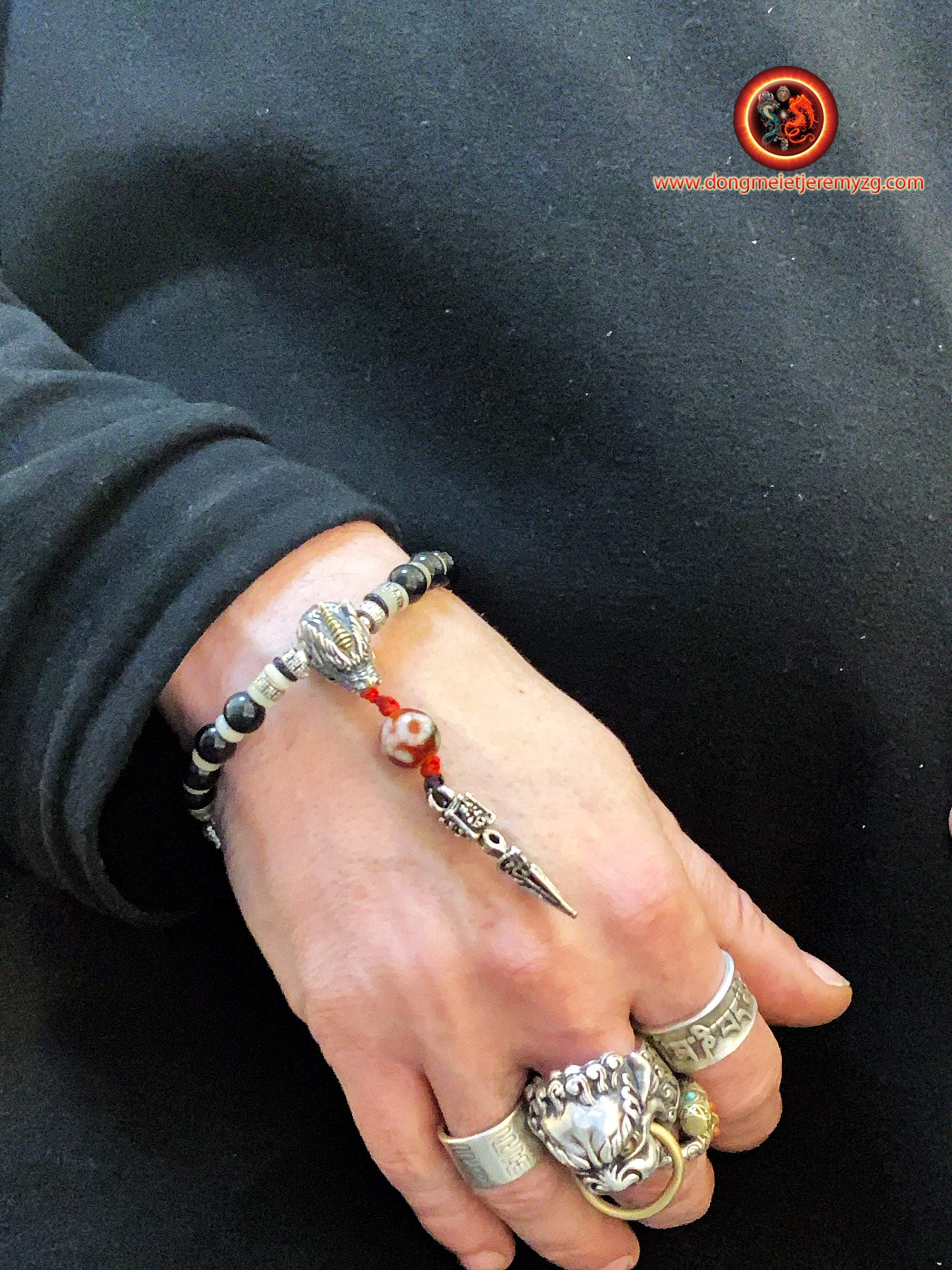 The energies of skulls and dragons are different but very complementary.
Skulls embody healing energy
Dragons embody the energy of transformation.

Obsidian celeste eye of excellent quality from Mexico, diameter of 8mm for each pearl.
About 30 grams of silver 925

Video of the bracelet available via this link
https://youtu.be/LGzH9oGUEJ8

We also put on this bracelet a vajra or dorje in Tibetan, a bell or drillou in Tibetan as well as a phurba in finish

Every Buddhist practitioner in Tibet and every ritual practitioner has three objects to which Tibetans attribute a deep and meticulous symbolism. These are the vajra, the bell and the mala.

Vajra, in Tibetan dorjé. It is arguably the most important symbol of Tibetan Buddhism. The term means "diamond" and refers to the indestructible nature of the mind itself, awakening, which is both imperishable and indivisible. The little scepter seems to be, originally, the diamond lightning of the god Indra, it is a mark of royalty and power.

the wisdom of equality, which recognizes that all the phenomena of samsara (me ordinary world) and nirvana (the pure fields or paradises of the Buddhas) are of an equal nature in that they are of a unique essence: emptiness

the wisdom of distinction, which denotes that the awakened mind perceives not only the emptiness of all phenomena (which is what the wisdom of equality operates) but also, in an uncompromized simultaneity, all phenomena as they manifest themselves;

accomplishing wisdom, which allows Buddhas to create pure fields and emanationes working for the good of beings;

the wisdom of the universal space, which indicates that all phenomenes, beyond all concept and duality, remain in the pure knowledge of the mind.

(6) The round part in the middle designates emptiness.

1° Its hollow part represents emptiness and its beating the "sound" of emptiness (i.e. its dynamics potentially containing the manifestation)

2° The lotus with eight petals symbolize the eight female bodhisattvas, associated with the idea of emptiness like all female deities.

3° The vase contains the nectar of fulfillment.

4° The face on the handle is that of the female deity Prajnaparamitam symbol of the knowledge of voidness.

5° The vajra contains its prope symbolism as seen above.

Under the dragon, we placed a DZI or "Tibetan sacred agate"
Authentic Dzi of recent invoice.
The Dzi is a Tibetan pearl, of distant origin, bringing many mystical benefits and benefits to its wearer. He is a Tibetan talisman or amulet, the king of lucky charms, sometimes revered as a true deity. The success of the Tibetan pearl comes from its multiple eyes, up to 21.
Dzi with two eyes, The pearl with 2 eyes represents the harmonious concept of Yin and Yang, the vital balance. So this pearl strengthens stability and balance.

On each silver ring of the Swastikas are engraved on the whole set
symbol that can be found in Europe (including Catholic art), Africa, Oceania, the Americas (pre-Columbian America among the Maya and Amerindians Navajo and Kunas) and Asia as far as the Far East. It appears in the Neolithic period for the first time in the pre-writing of the Vinča4 culture. This temporal and spatial ubiquity has sometimes earned it the name of "universal symbol". It can be described as a cross composed of four gallows each taking the form of a Greek gamma in capital (Γ), hence the name swastika that is often given to it.

The symbol is currently used in Asia and particularly in India. In Hinduism, it has many sacred meanings and it represents the god Ganesh. It is still a ubiquitous symbol among Buddhists. It is the primary symbol of Jainism, considered by its followers as the most favorable of all symbols. In China, it symbolizes eternity. It is also frequently seen in statuary temples, decorations, dress patterns in all Buddhist countries, the Far East, Southeast Asia and Central Asia.