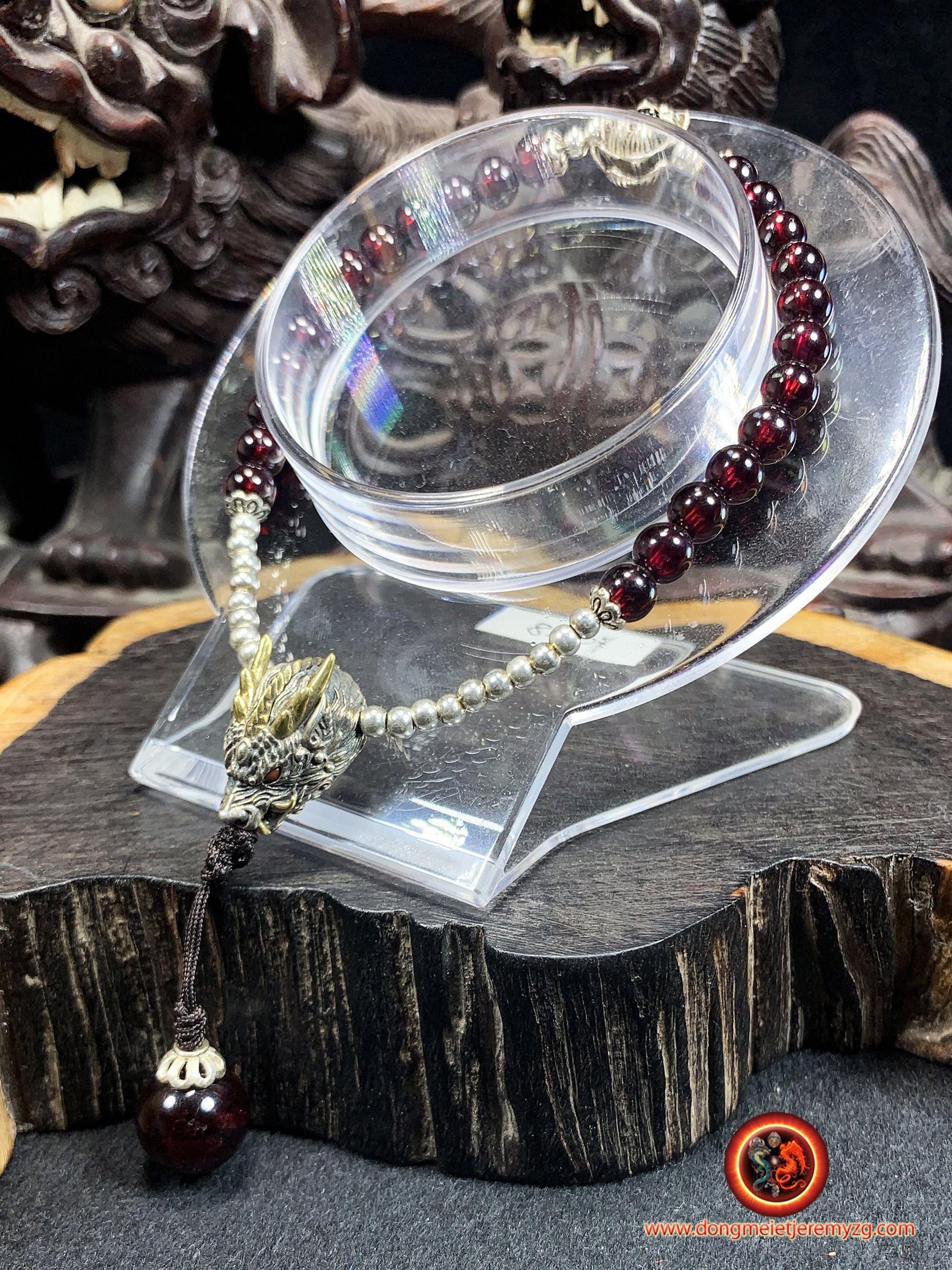 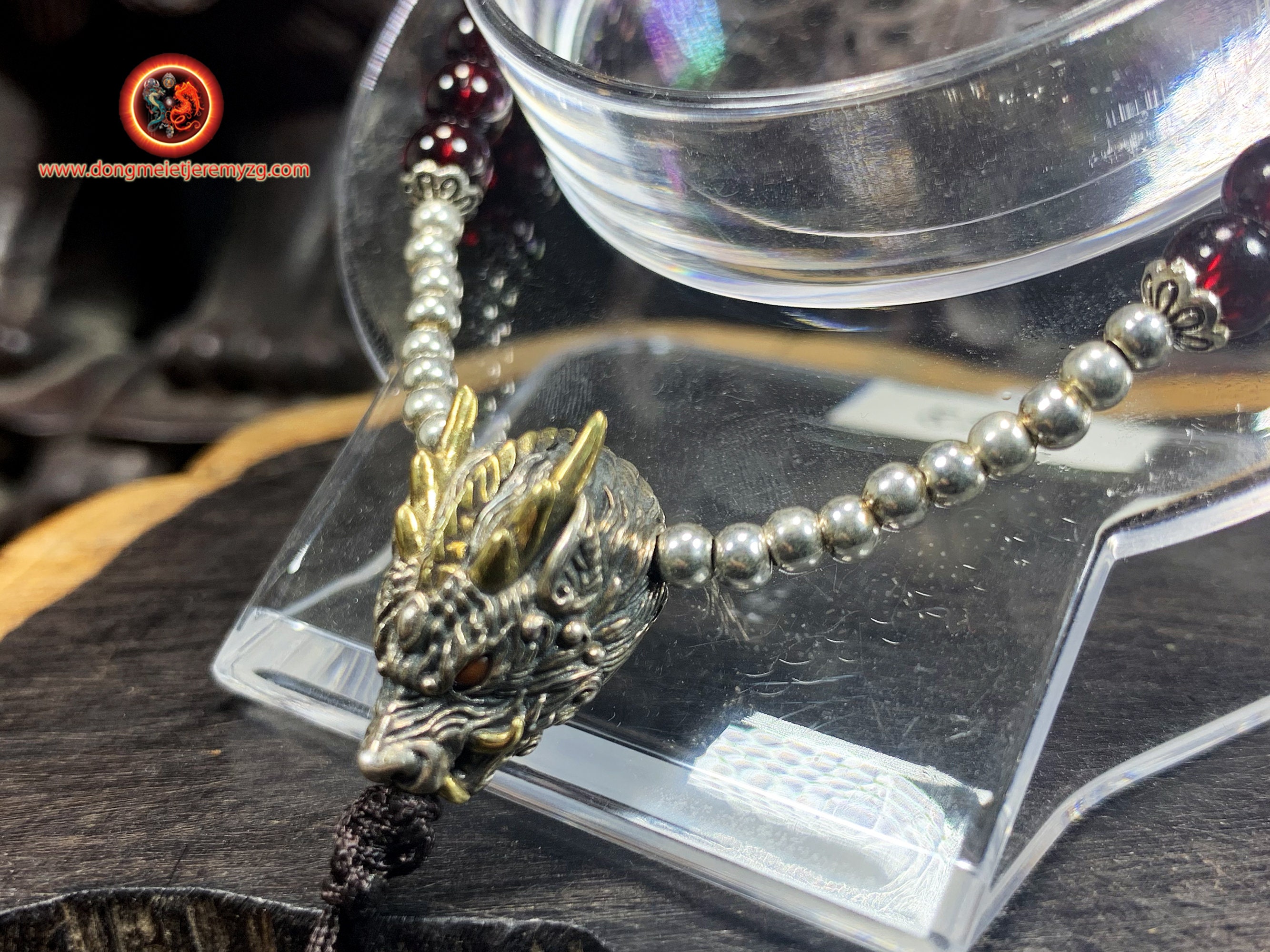 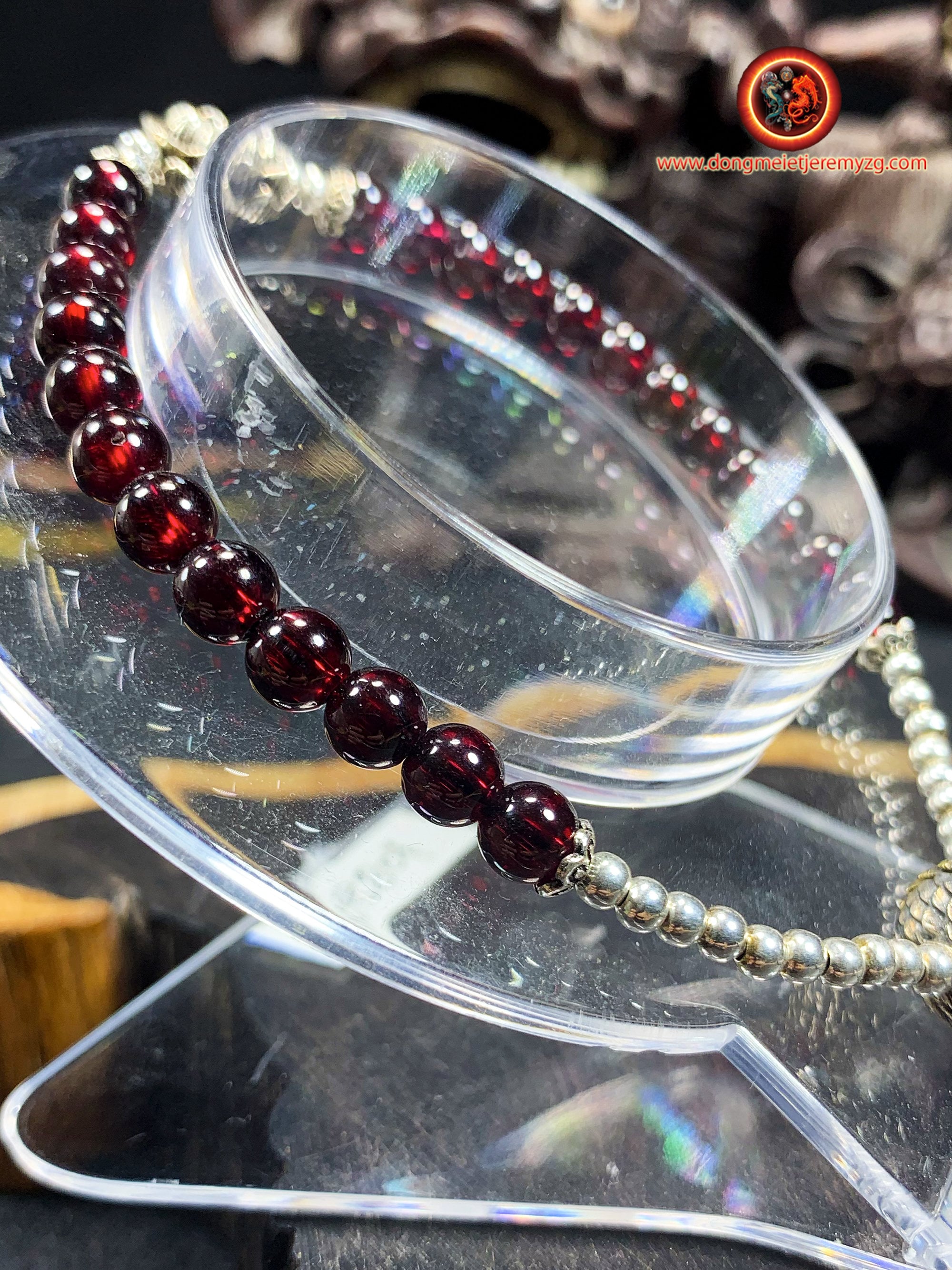 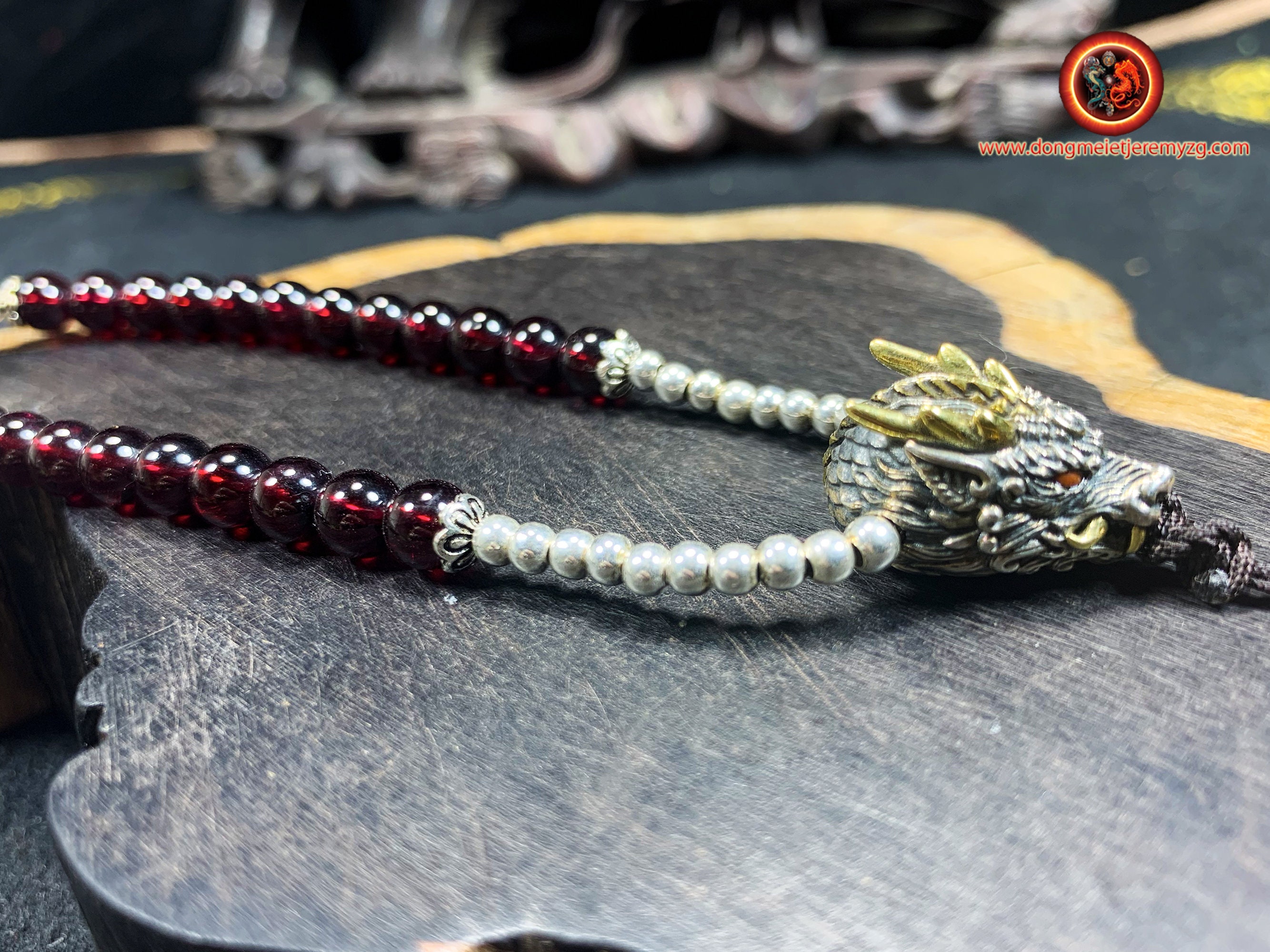 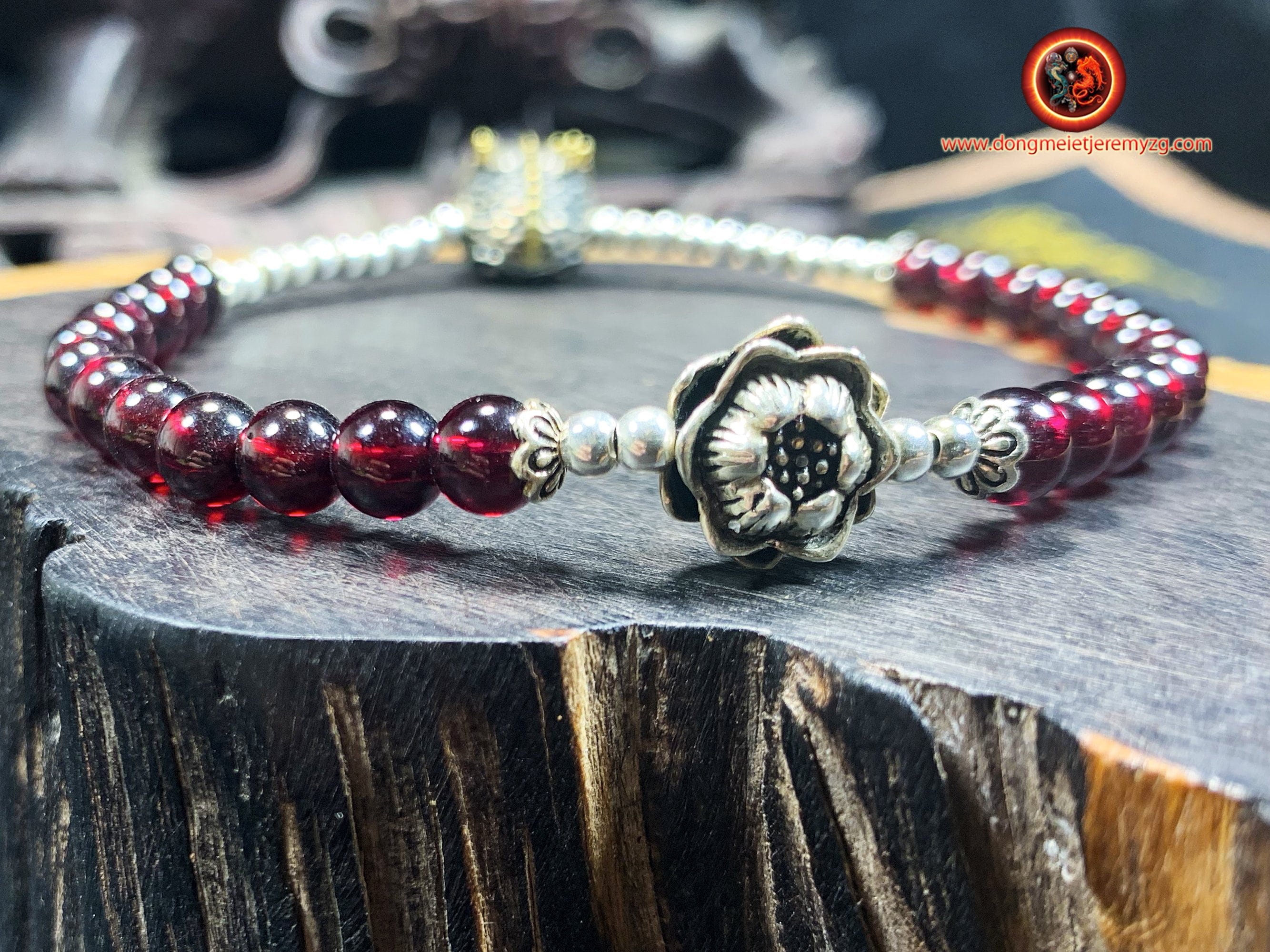 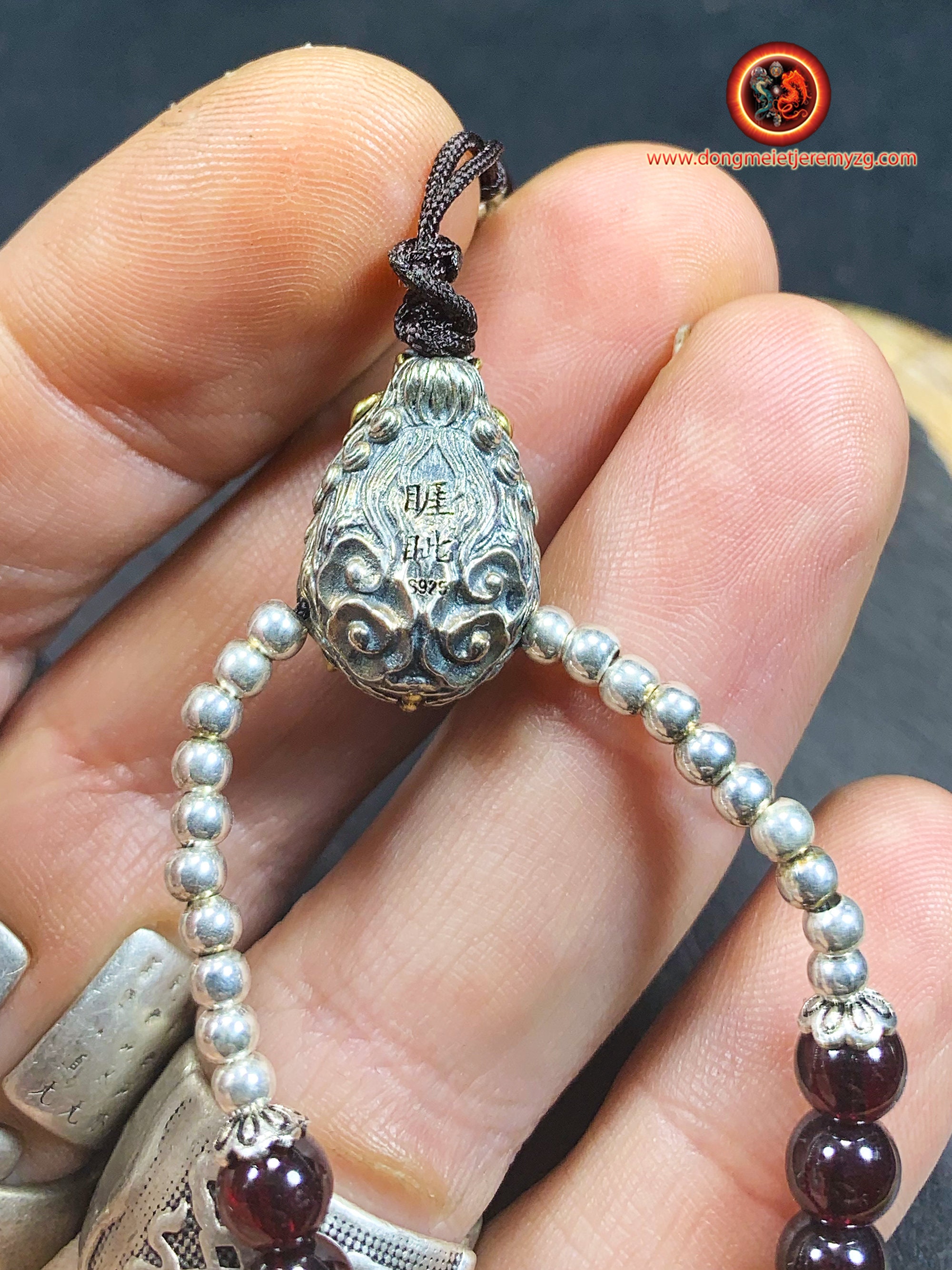 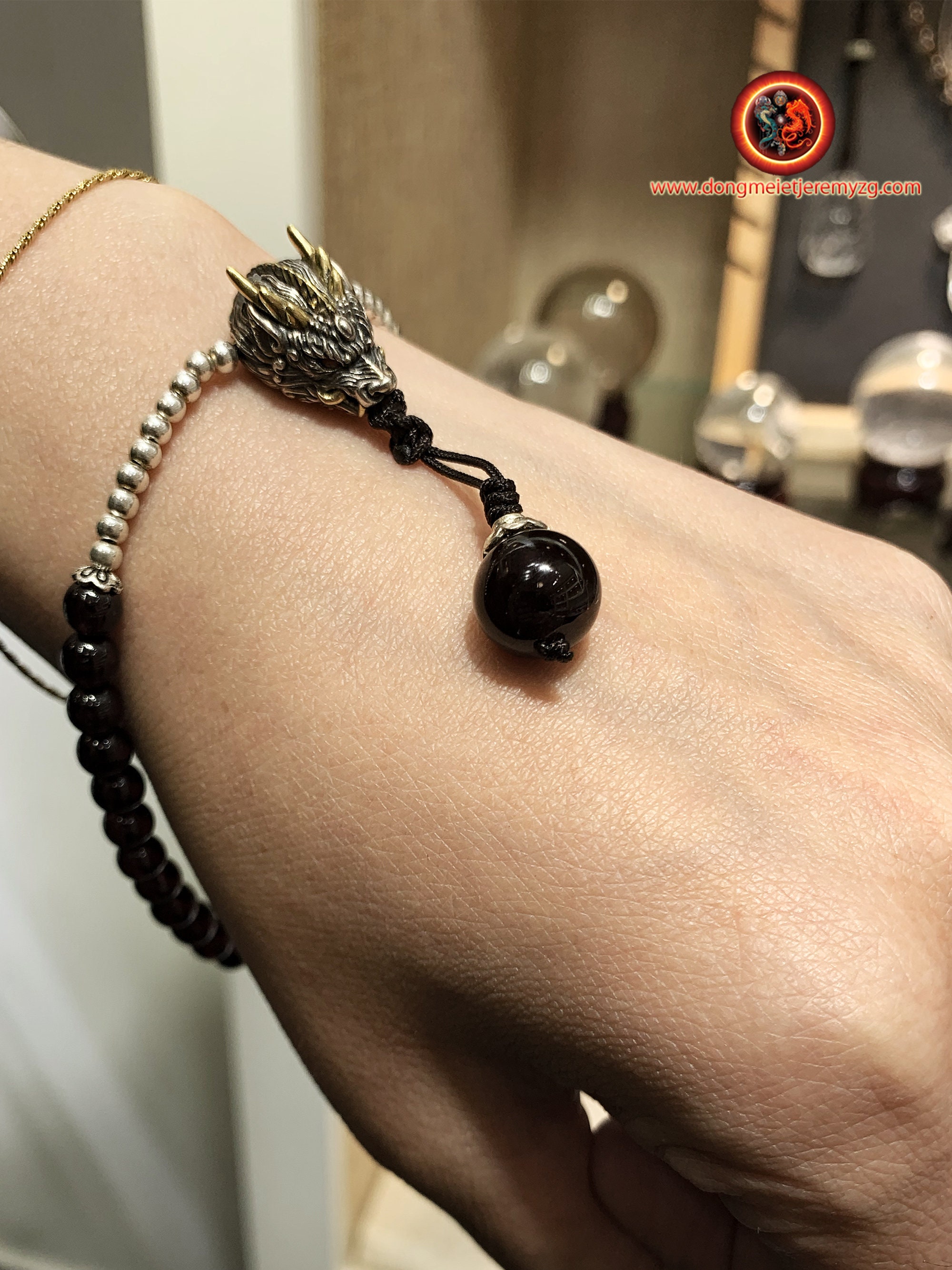 Dragon bracelet. Dragon, "Yazi."
Mozambique's excellent quality pyrope garnet, diameter of each 8mm pearl
The large finishing pearl is also in pyrope garnet and is 12mm in diameter
silver 925,
agate called "nan hong" (southern red) agate in front of its red color has cinabre inclusions.
these agates are set in the eyes of the dragon

Adjustable bracelet has all wrist sizes thanks to a sliding knot (like traditional malas) located under the dragon's mouth, as shown in the video also available via this link

睚眦 The seventh son of the dragon, the "wolf and dragon hybrid", is a combat-loving creature, he was ornamented on the pommel of swords, the blade gushing from his mouth. It is an unwavering protection in defence in the event of an attack.
The soldiers wore the effigy of Yazi on their weapons feel to strengthen courage, erase fear and increase their strength. It was thought that victory belonged to anyone who sported Yazi in a battle.

We mounted this bracelet with obsidian celeste eye, natural glass of volcanic lava by the analogy between the dragon and the volcano.
Similarly, in Chinese antiquity, jade was claimed to be crystallized dragon seed.

In Buddhism, the dragon becomes protector of the Dharma, vairocana's vehicle, the white Buddha sitting in the east (or center). Its dragon-backed throne probably derives from the Chinese imperial throne. The Turquoise Dragon is the mount of a large number of protective deities, treasure keepers and rain and storm gods. As guardians of treasures, the Sino-Tibetan Dragons are the counterparts of the Indian nagas. The Tibetan term druk (tib.brug) means both "dragon" and "thunder." Bhutan, a Buddhist kingdom, is called Druk Yul (Land of the Dragon). Its inhabitants, the drukpas, take their name from the spiritual lineage Drukpa kagyu, native to Tibet. This lineage was established by the wise Tsangpa Gyaré who, having once observed nine dragons disappear in the sky near Gyantsé, decided to establish the monastery of Ralung. In Tibetan Buddhism, the rise to heaven of a group of Dragons is an auspicious sign.