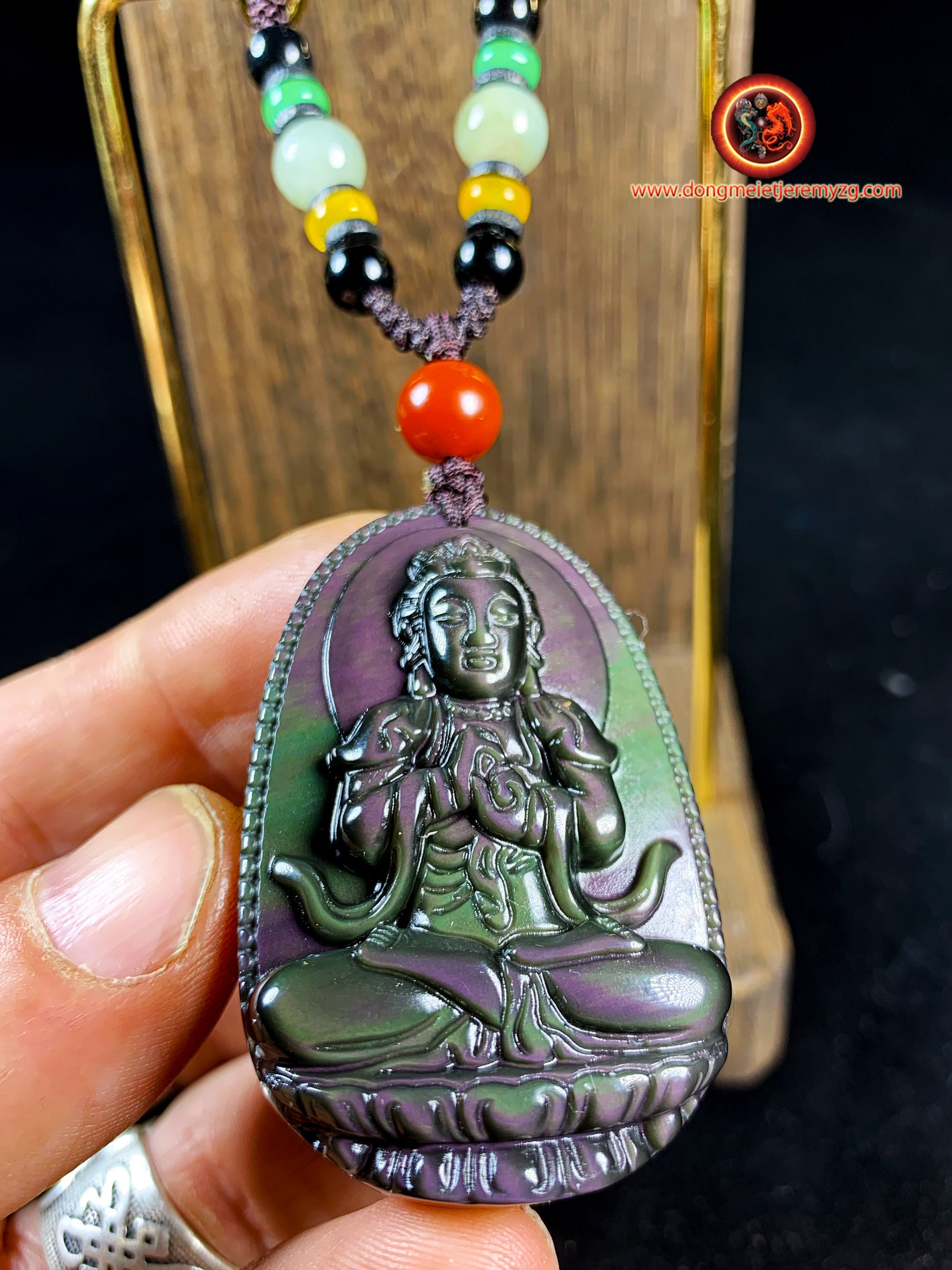 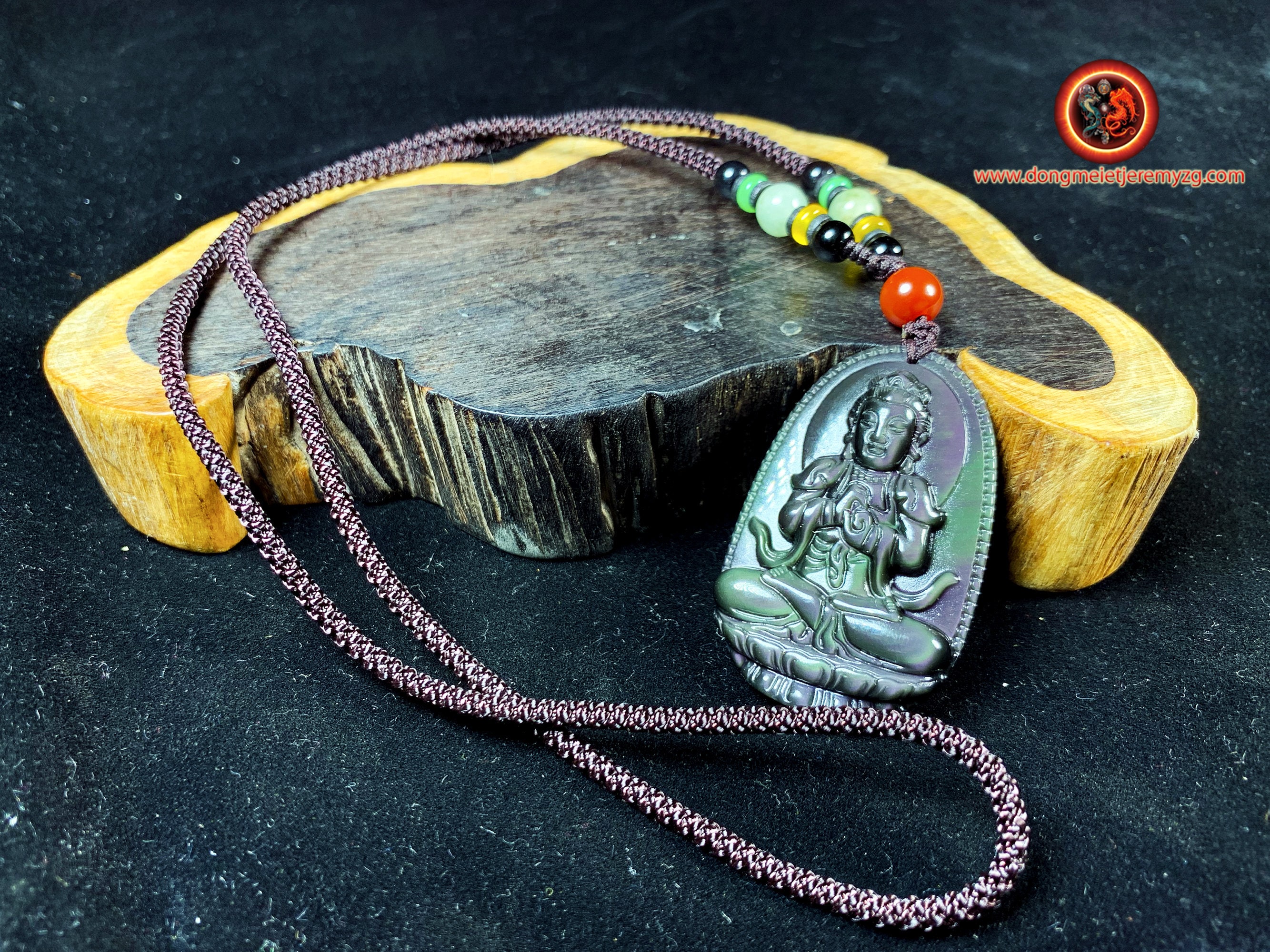 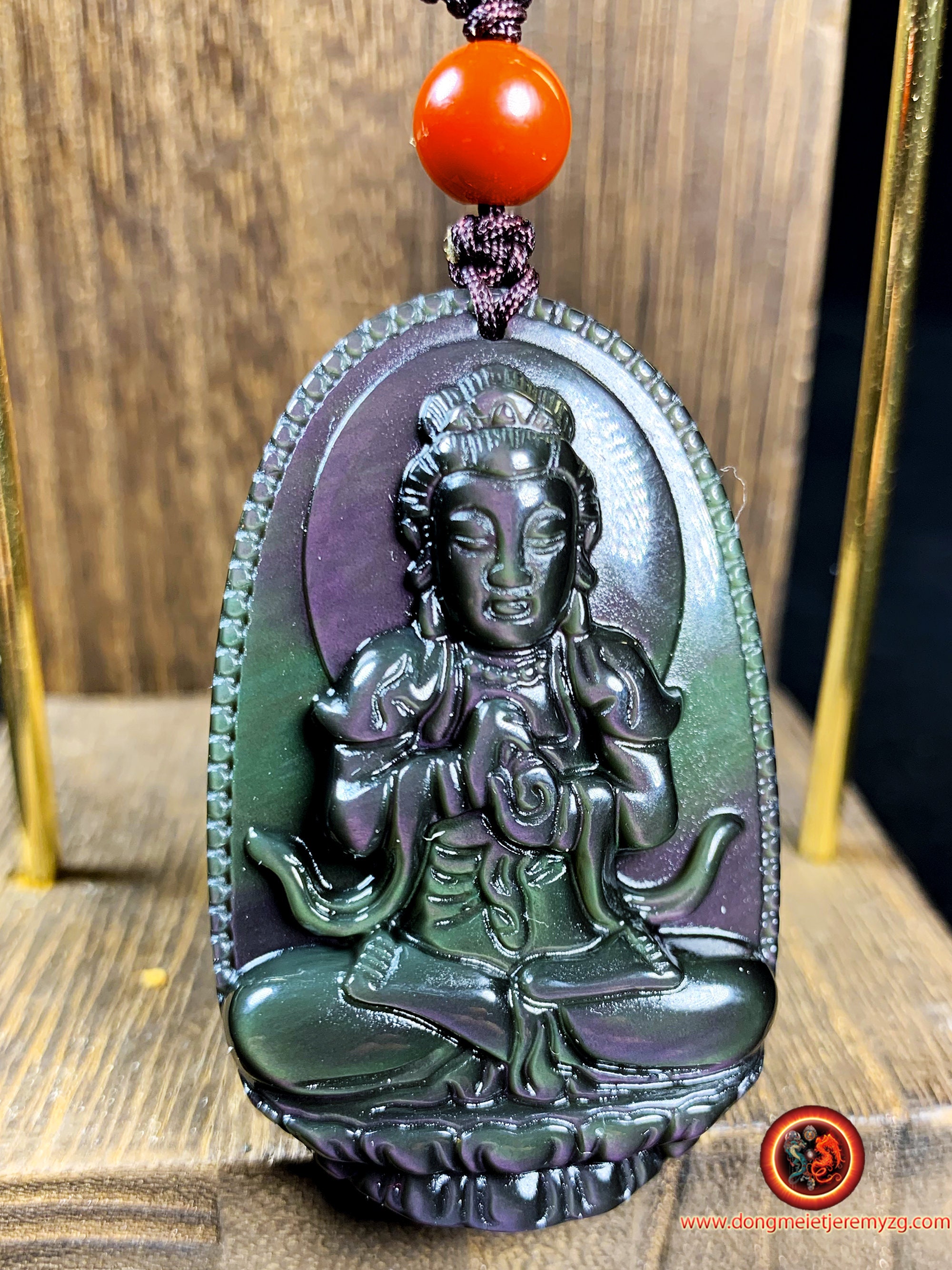 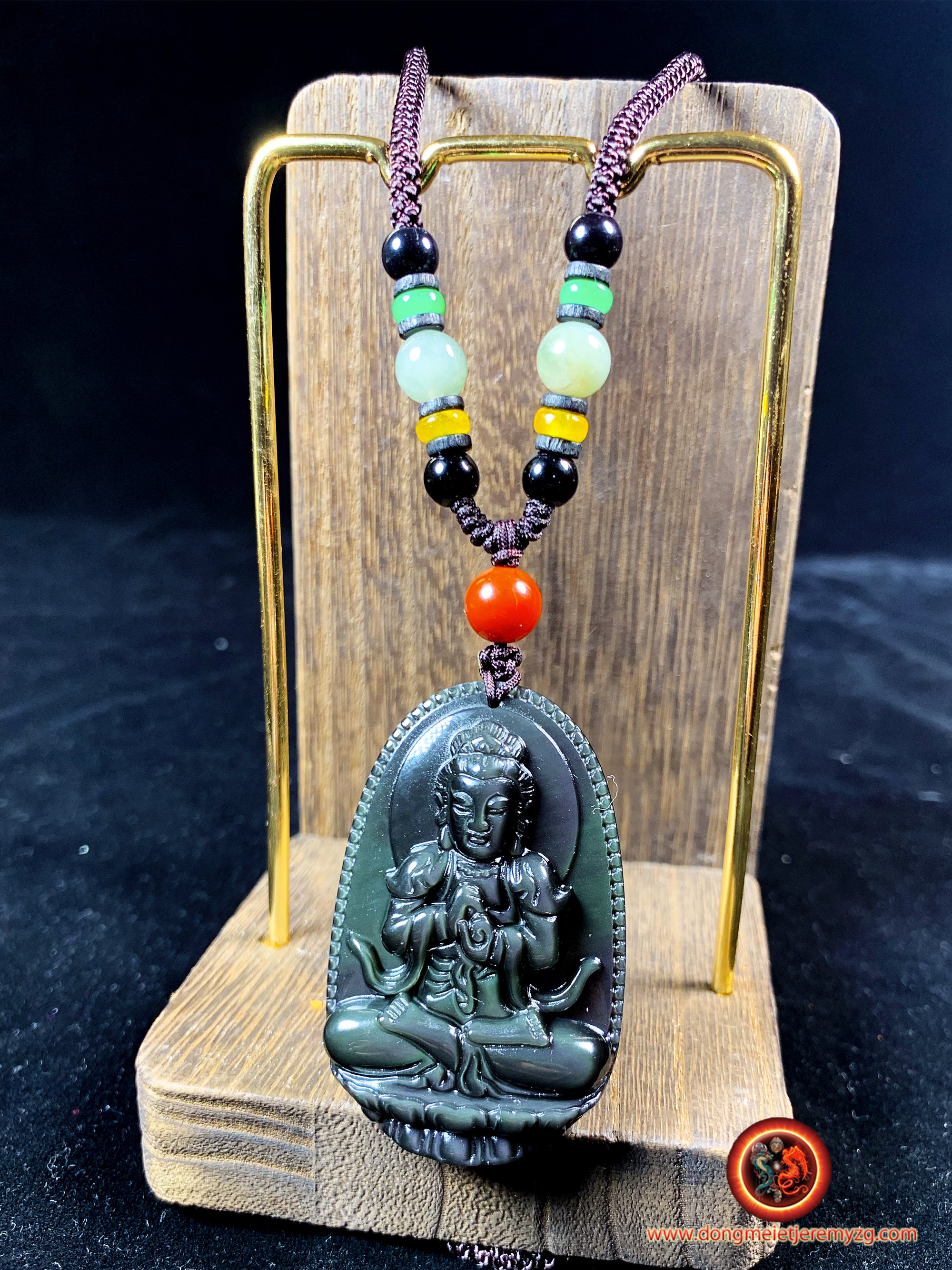 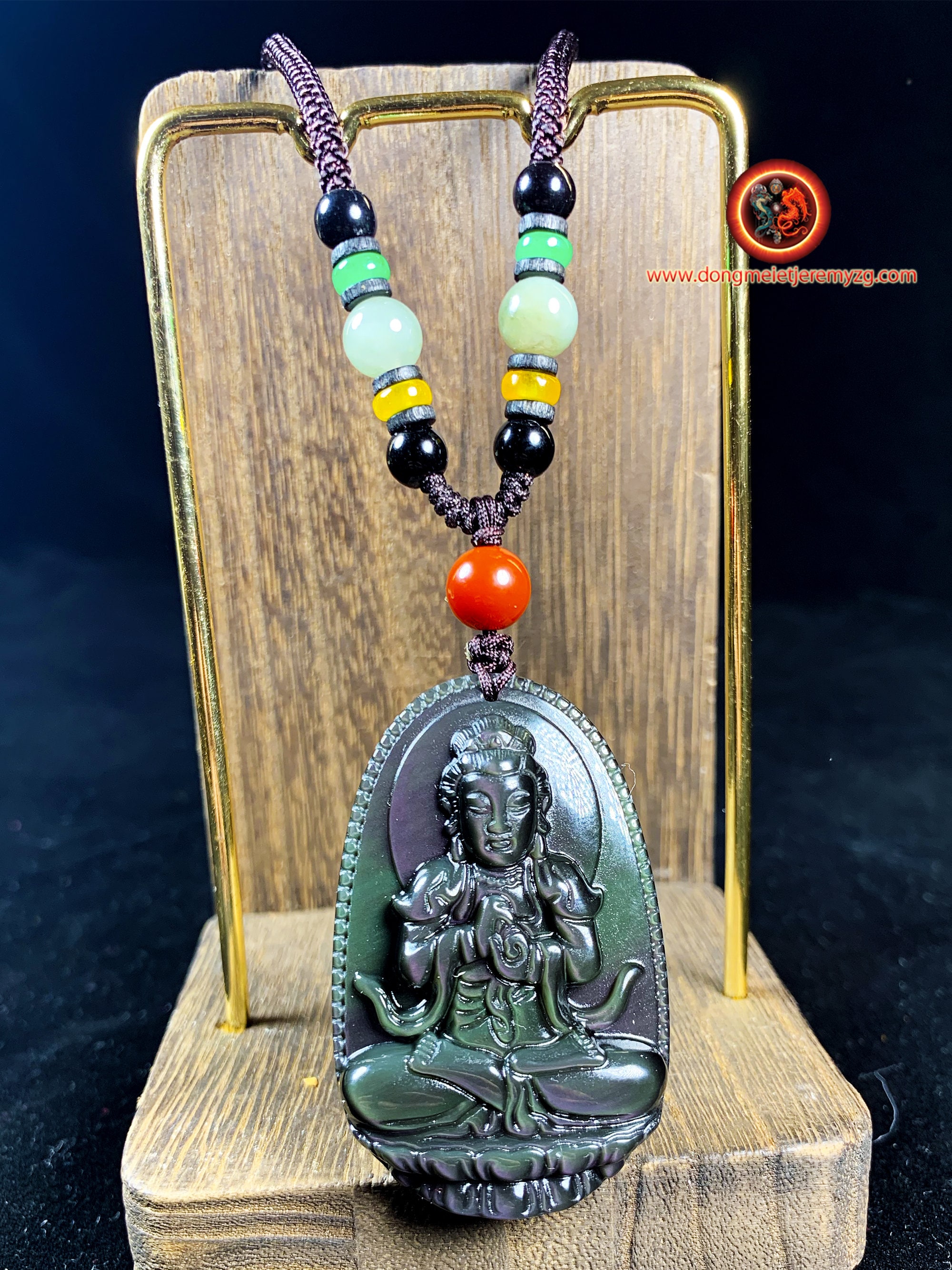 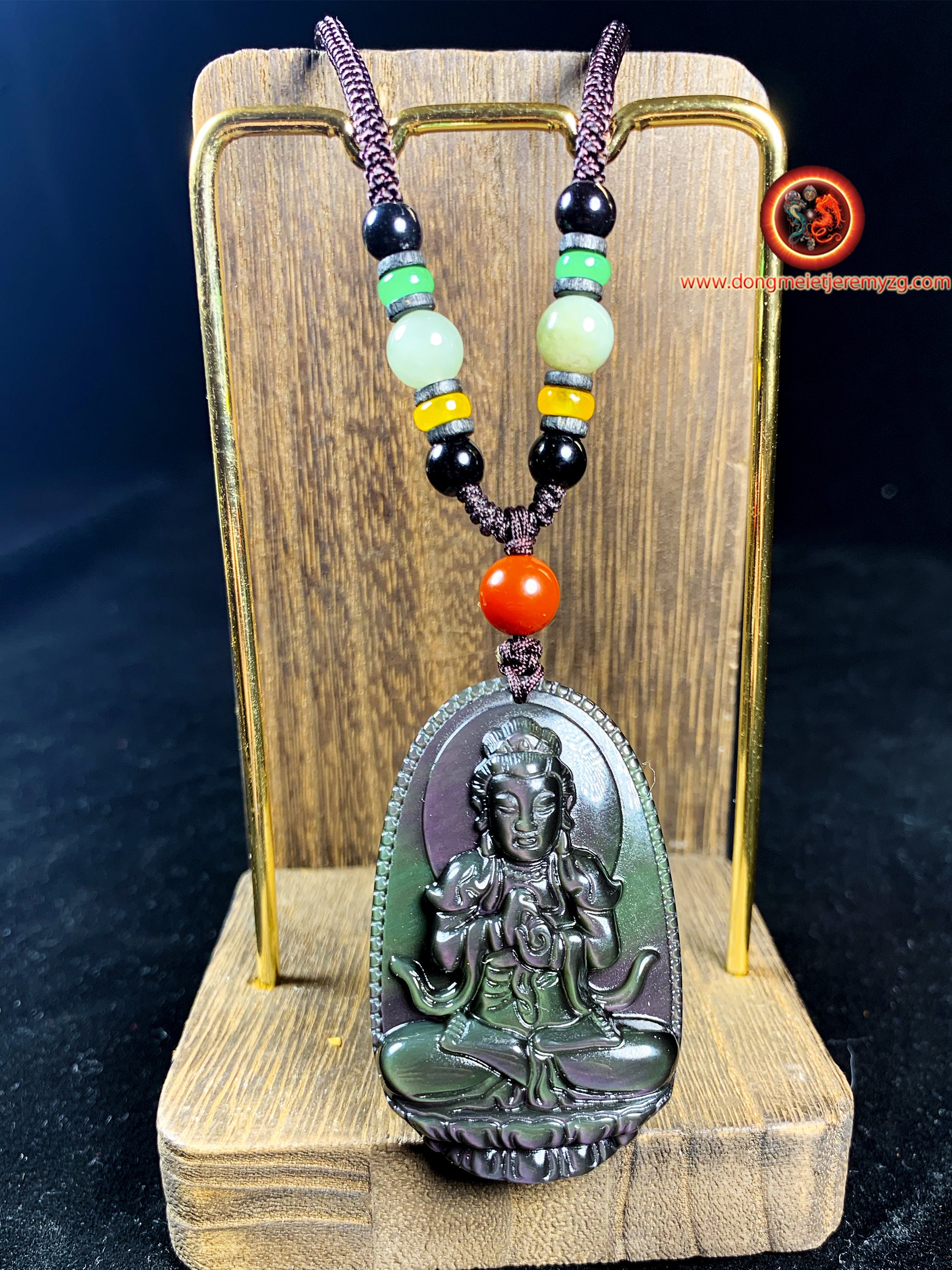 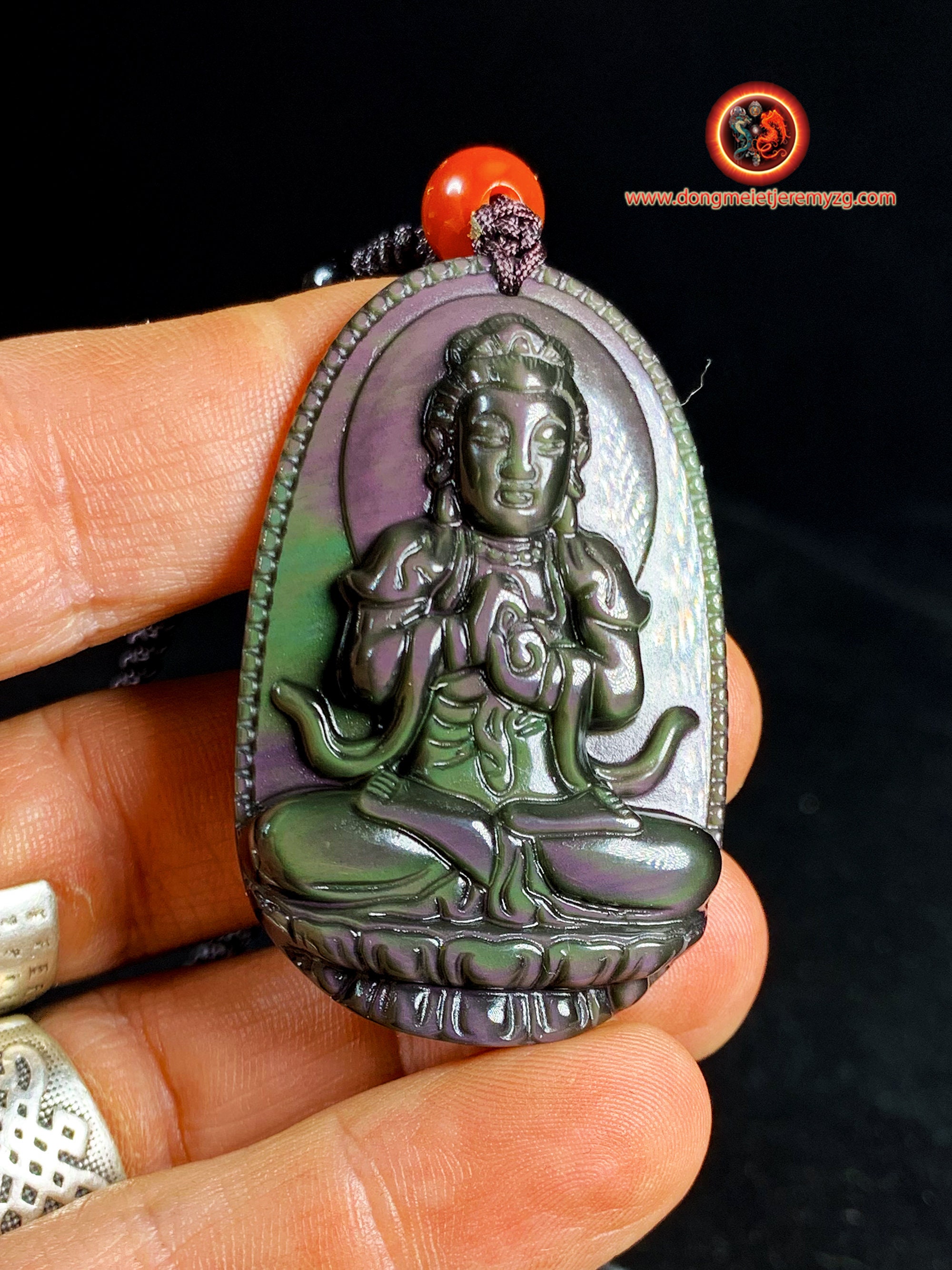 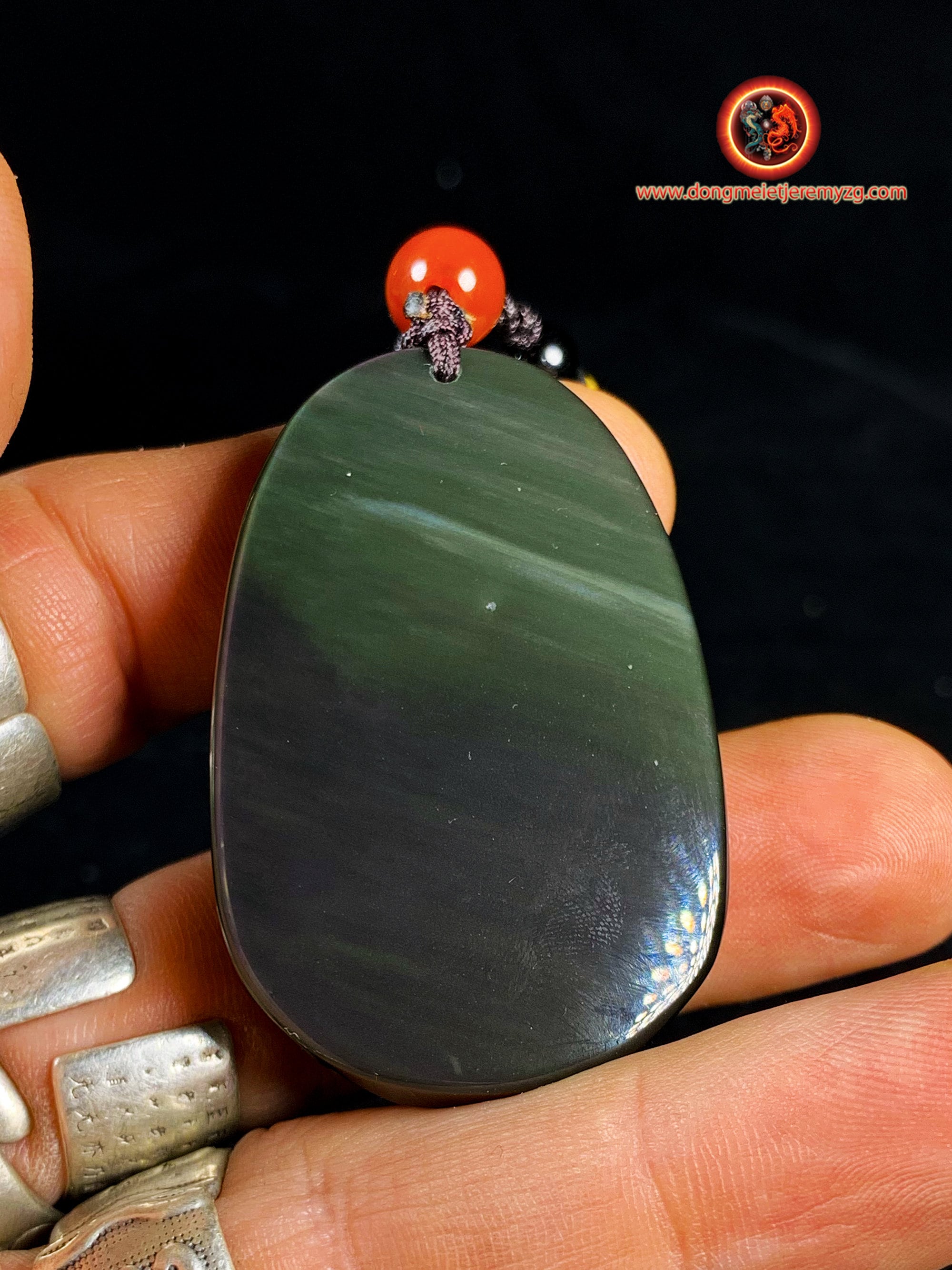 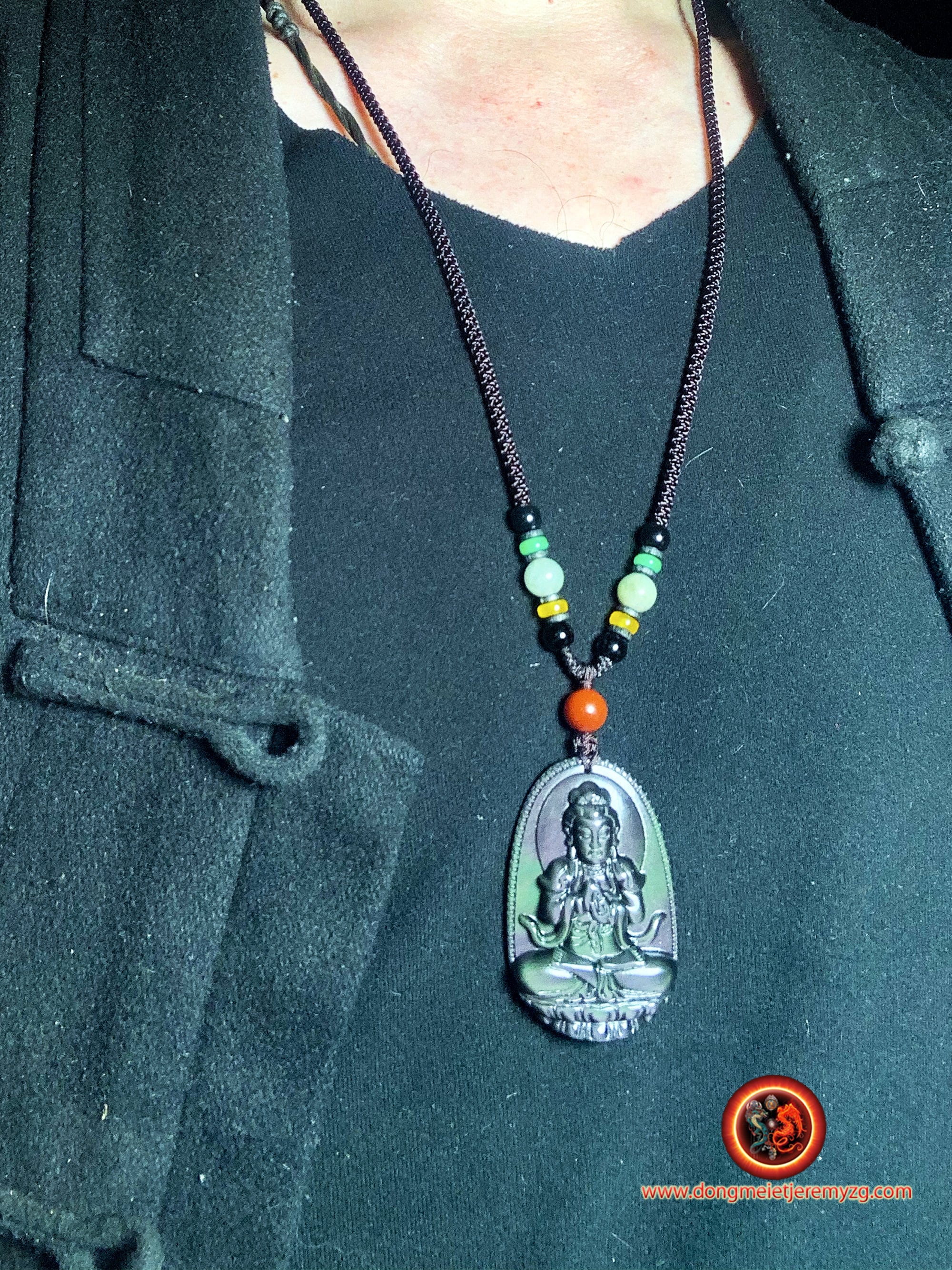 Pendant, Buddha, Vairocana.
Buddhist amulet in obsidian celeste eye.
Obsidian natural celeste eye from Mexico of high quality
As a gemologist graduated from the National Institute of Gemmology of Paris, all our stones are appraised and certified.

Video of the room available via this link
https://youtu.be/wWtcxKIt3Og

Vairocana Buddha, the supreme Buddha, is the protector of people born under the sign of the goat and the monkey.
"Great Sun", "Great Light" or the "Resplendent" is the central Buddha of the Tantric schools (Tibetan or Shingon), as well as the Chinese and Japanese Mahayana schools Tiantai-Tendai and Huayan-Kegon. He is one of the major Buddhas in East Asia. He is one of the five Wisdom Buddhas (the dhyani Buddhas) holding the central place on the cardinal points. In the conception of the five Tathagatas (Buddhas) of Mahayana and Vajrayana, Vairocana is at the center and is considered a Primordial Buddha or Adhi Buddha. The term Tathata in Chinese zhenru, in Japanese shinnyo refers to the supreme principle, the other 4 meditation Buddhas being its emanations (Akshobhya to the east, Amoghasiddhi to the north, Amitabha to the west, Ratnasambhava to the south)
His color being white, his mount a lion or a dragon, his element is metal, often depicted making the dharmachakra mudra of his hands, representing the initiation of the dharma wheel, his bodhisattvas are Samantabhadra and Manjushri
Vairocana is also considered the embodiment of the Buddhist concept of Śūnyatā, a principle that "all things are empty of intrinsic existence and nature (svabhava)", but can also refer to the teachings of Buddha nature and primordial or empty consciousness, as in the Dzogchen, Shentong or Chan/Zen.
Vairocana is often presented as the supreme form (dharmakāya) in the mahāyāna sutras, particularly the Avataṃsaka sūtra and the Lotus Sutra.
Vairocana's role is explained by the theory of the three bodies (Sanskrit: trikāya, Chinese: Sānshēn), developed by the early Mahayānā schools. According to this theory, three aspects or bodies of the Buddha are identified:
• The "body of transformation" (Nirmāṇakāya), historical body of the Buddha
• The "body of rejoicing" (Sambhogakāya), the Buddha as a deity, as it appears for example in meditations
• The "Buddha body" (Dharmakāya), the Buddha as supreme reality, truth or emptiness
Vairocana Buddha is first introduced into the Brahmajala Sutra:
"Now I, Buddha Vairocana, am sitting on a lotus pedestal; Out of a thousand flowers that surround me are a thousand Sakyamuni Buddhas. Each flower supports one hundred million worlds; in each world appears a Sakyamuni Buddha. All of them sit under a Bodhi tree, all simultaneously reach Buddhahood. All these countless Buddhas have the Vairocana as their original body. »
In Sino-Japanese Buddhism, Vairocana was gradually replaced as an object of veneration by Amitābha, largely due to the growing popularity of Pure Land Buddhism, but Vairocana's legacy remains at Tōdai-ji Temple with its massive bronze statue. Shingon current important Japanese vajrayana Buddhist current.
The connotation of "light" or "sun" of the name Vairocana makes it possible to envisage a proto-Iranian origin. A Persian influence has also been proposed for Amitabha, another Buddha whose name evokes light. Some aspects of Shinto's main deity, Amaterasu, may have been attributed to him in popular Japanese Buddhism.